5 days 5 dates challenge in Russia. How'd that work out? 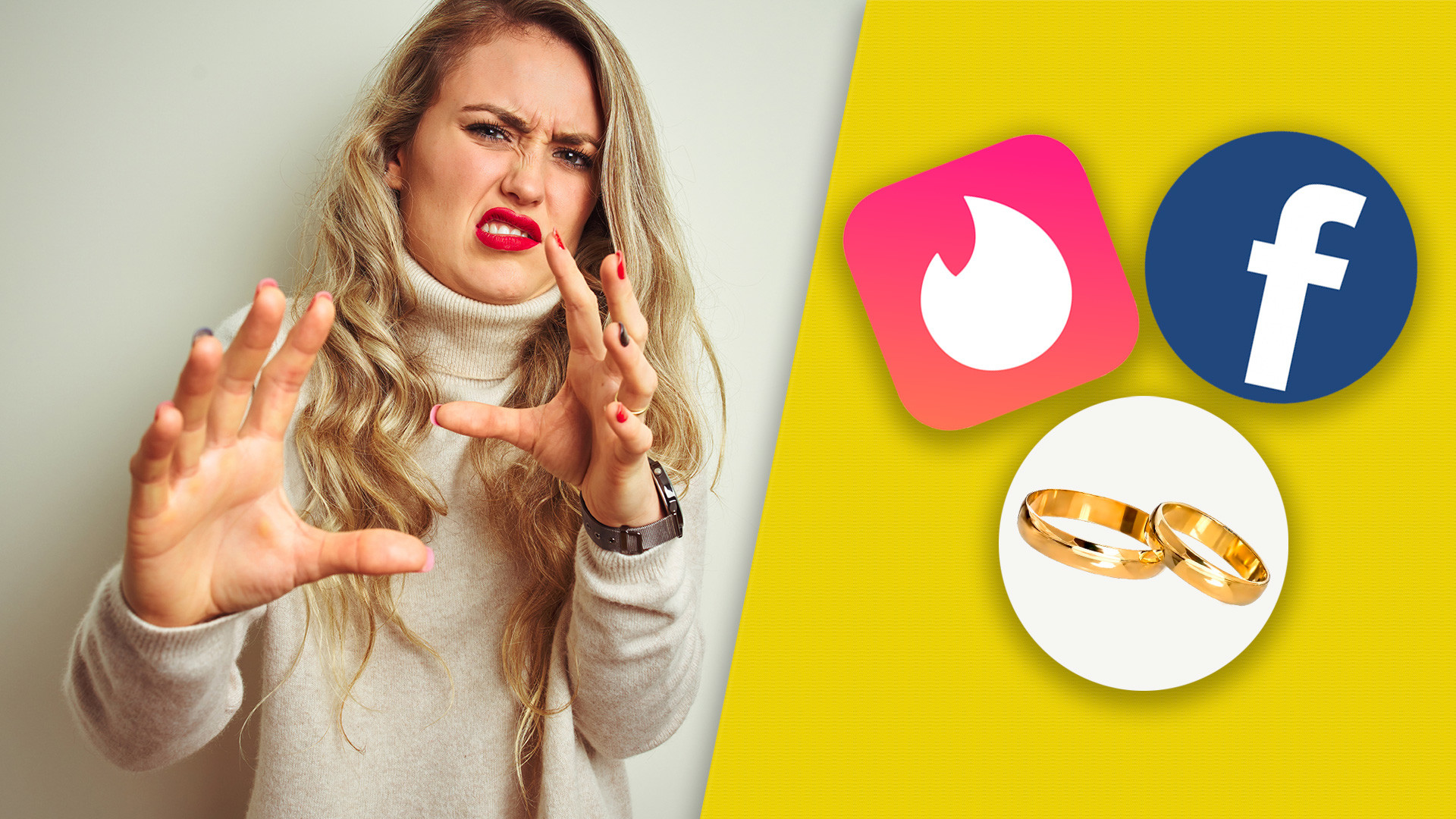 Legion Media
For five days in a row, I got to know the Russian dating scene up close. It was quite an eye-opener.

There are many dating sites in Russia, but almost all are Tinder clones. Without a second thought, I downloaded the app, uploaded several holiday snaps, sprinkled on a brief description of my hobbies, and starting swiping the faces left and right. Right-swiping turned out to be less appealing, because a third of men’s accounts in Moscow look like this: 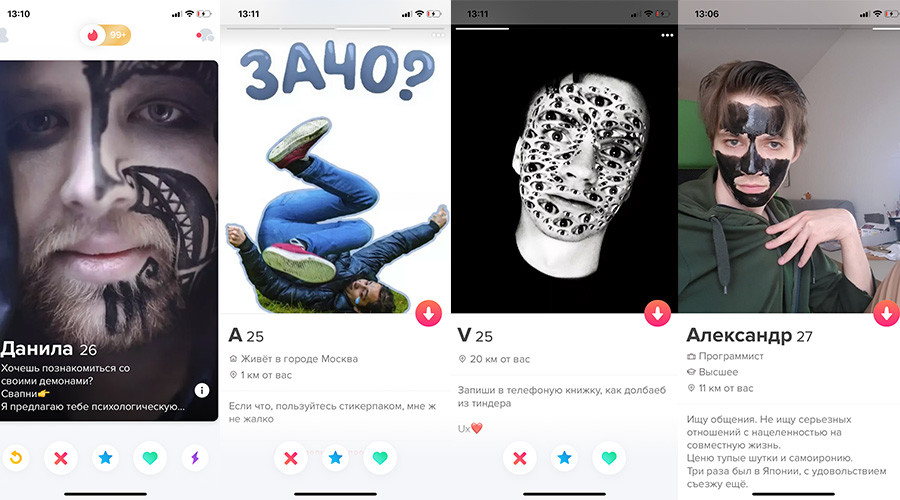 But I didn’t give up, and even right-swiped those with pics of cats and puppies instead of themselves. The matches started pouring in, and I surpassed myself by collecting 275. Everything was great except that... no one messaged me. Seriously. No one.

As a bit of background, girls in Russia are taught never to send the first message. The man has to initiate the conversation. But this was an emergency. So I swallowed my female ego and started messaging “Hi” to the guys I liked. Towards evening, I had amassed the following dialogue with one of them:

Me: Care to elaborate?

Him: sorry, you’re a journalist, i’m not. forget it. bye

As the evening wore on, one fellow did decide to show initiative, which took the following form:

"Good morning. My day has started well. I am always looking for friends for sex.”

“What the hell are you on that for? People only use it for sex or an ego trip,” a female friend said when I told her about my experience. Then I remembered that I had actually used Tinder before, more than a year ago. Although I replied to hardly any messages, I loved getting compliments, and every match sent my self-esteem into the stratosphere. If I was like that, what right did I have to accuse men of doing the same?

With Facebook, things should have been much simpler. My account was long-established, my photos from Instagram had collected lots of deserved likes from friends and colleagues, and the system itself recommends potential friends.

But no sooner had I begun the search for a soulmate when a message popped up in Messenger: "Hey, your Instagram is amazing, you should have studied poetry and literature with us at the university."

For a long time I tried to figure out how selfies and landscape photos were connected with poetry, but it just turned out to be a quirky compliment from a tech correspondent at a Russian business newspaper. After a couple of hours of messaging about journalism, sci-fi films, and The Witcher, he invited me to a bar. To butter me up even more, he set one of my photos as his phone wallpaper. Knowing that to be a geek’s highest form of compliment, I realized I had to go. 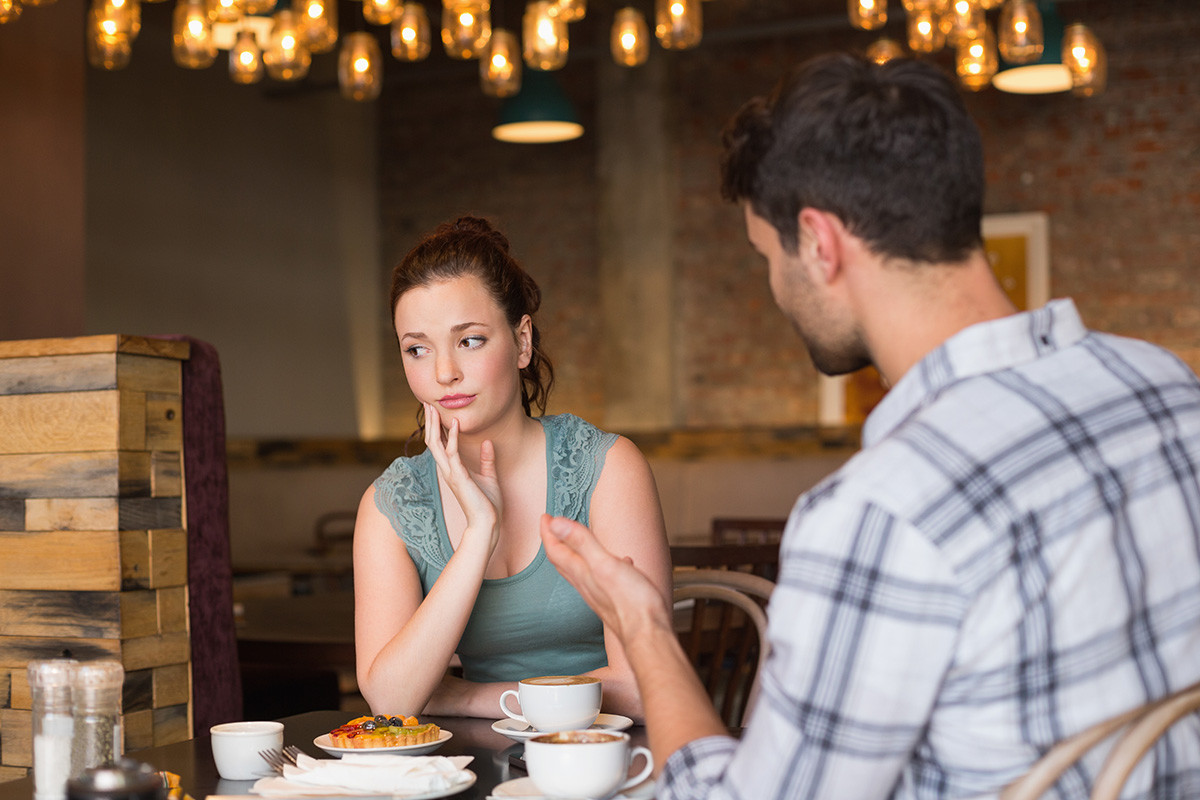 The geek showed up in tight jeans and huge galoshes. The bags under his eyes from 24/7 screen time seemed to occupy half his face, and his sleep-deprived bloodshot eyes merged with the red lighting of the bar. With a satisfied sigh, he plopped down onto the sofa next to an artificial palm tree. I made the catastrophic mistake of ordering an Aperol. Turned out I should have had coffee so as to stay awake for the hour-and-a-half that he spent fumbling through his semi-rehearsed stories. I managed to nod understandingly several times, make a few inarticulate sounds, stroke the palm tree, and people-watch the kissing couples.

The Aperol acted quickly, and the tales about weird colleagues carried on flowing. Feeling the land of nod approaching, I hit the emergency excuse button. “Suddenly” remembering a non-existent but urgent meeting, I escaped home.

“I know you’re a mafioso. You know why? ’Cause you’re so f*ckable,” a handsome man of about 30 and Georgian origin tells me, pouring white wine into my glass. It’s about 6am. Me, him, a female friend of mine, and 13 others are playing Mafia (a Russian party game) in a Moscow cafe. It's been one helluva day, and things have gone anything except according to plan.

On day three, I decided to ditch the gadgets and do it the old-fashioned way: in a bar. Hell, it would even be an excuse to wear a dress. With made-up face and styled hair, I ran to the elevator to go up to the office, already planning the ideal date, when suddenly my thoughts were interrupted by the smell of medicine and a painful cough:

“Hey lady, press floor 3, will you. Although I wouldn’t mind going to floor 6 with such a woman,” says an old man of about 75 in a starched shirt with a sly smile. I laugh politely in response and rush out, having suddenly decided to use the stairs. 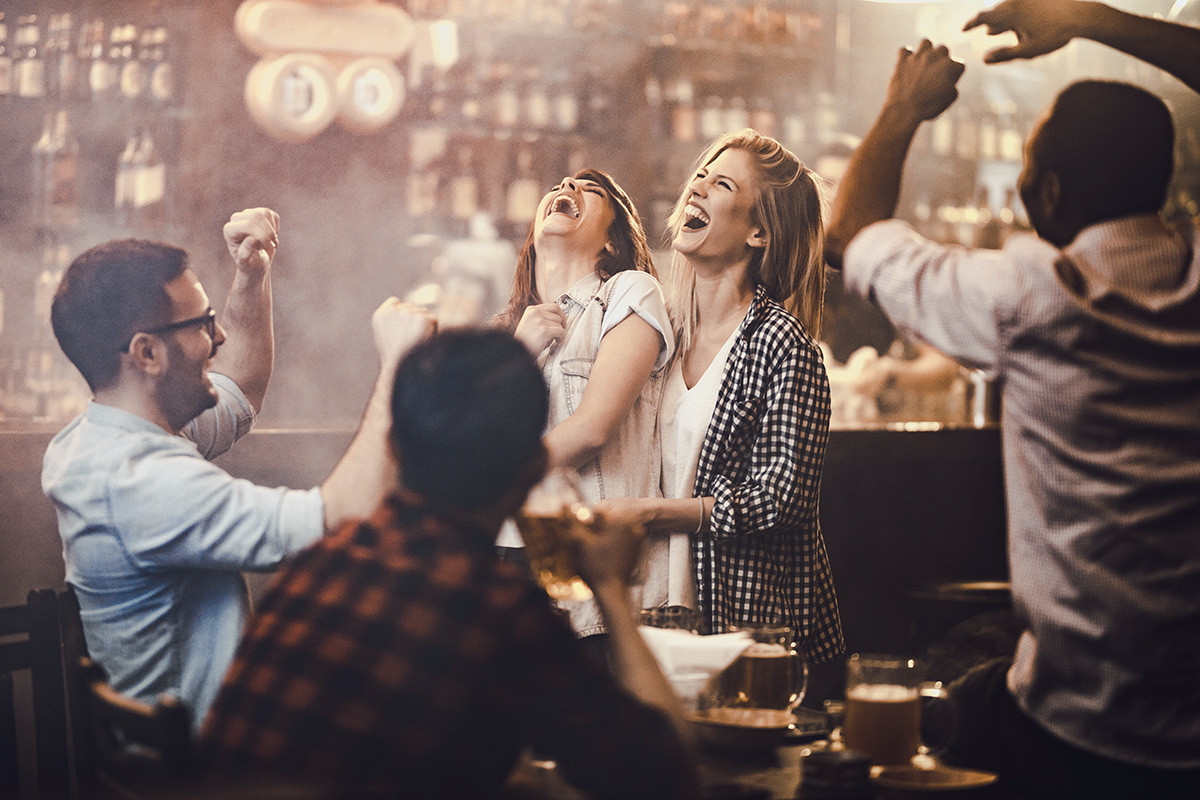 At about 2am that night, my friend and I are dancing wildly to Linkin Park in a Moscow bar. Two men who introduced themselves as Portuguese (I don’t remember anything else about them) ply us with another glass of whiskey and cola. This seems to be the fourth. My friend is literally jumping for joy and shouting something. I don’t hear a single word and my head starts to buzz, but through the music I catch snippets of what our “Portuguese” companions are saying:

“See them dancing? They’re total rock chicks. Which one you going for? I’m after the brunette,” says one of them in perfect Russian, trying to grab my waist without asking for permission.

I move away, mumble something about a headache, grab my friend by the arm, and drag her outside into the cold air, away from the bar. We run to the nearest cafe to wait for the subway to open and sober up. Regaining our senses over a cup of green tea, we hear screams of laughter from the next room. Our curiosity gets the better of us, and — lo and behold — we find ourselves playing Mafia for the next couple of hours. That same Georgian guy takes my number, and the next morning calls me. Incidentally, I really was a mafioso. He figured me out in the last round.

“Have you ever had experience of a relationship?” a plump man of about 42 in an austere suit asks me. In response to my calm “Yes,” he looks aghast.

“And you’ve already kissed and everything else too? That’s terrible. All men want virgins! We say to our male clients that it was a mistake of youth, but now you’ve repented and started life anew,” Sergey tells me.

Sergey is a matchmaker at a leading marriage agency. Such firms still do good business in Russia with those unable to find a mate by other means. They explain the right way to fill out a Tinder profile, how to reply to messages, what to say on dates, as well as arrange these dates over a four-month period. The price of the basic package is 54,000 rubles ($760). The premium option costs 1.5 million rubles ($21,000). For this, the matchmaker guarantees a marriage partner, provides family consultations, and promises to "completely change the client for the better." The first consultation is free. That’s where I am now. 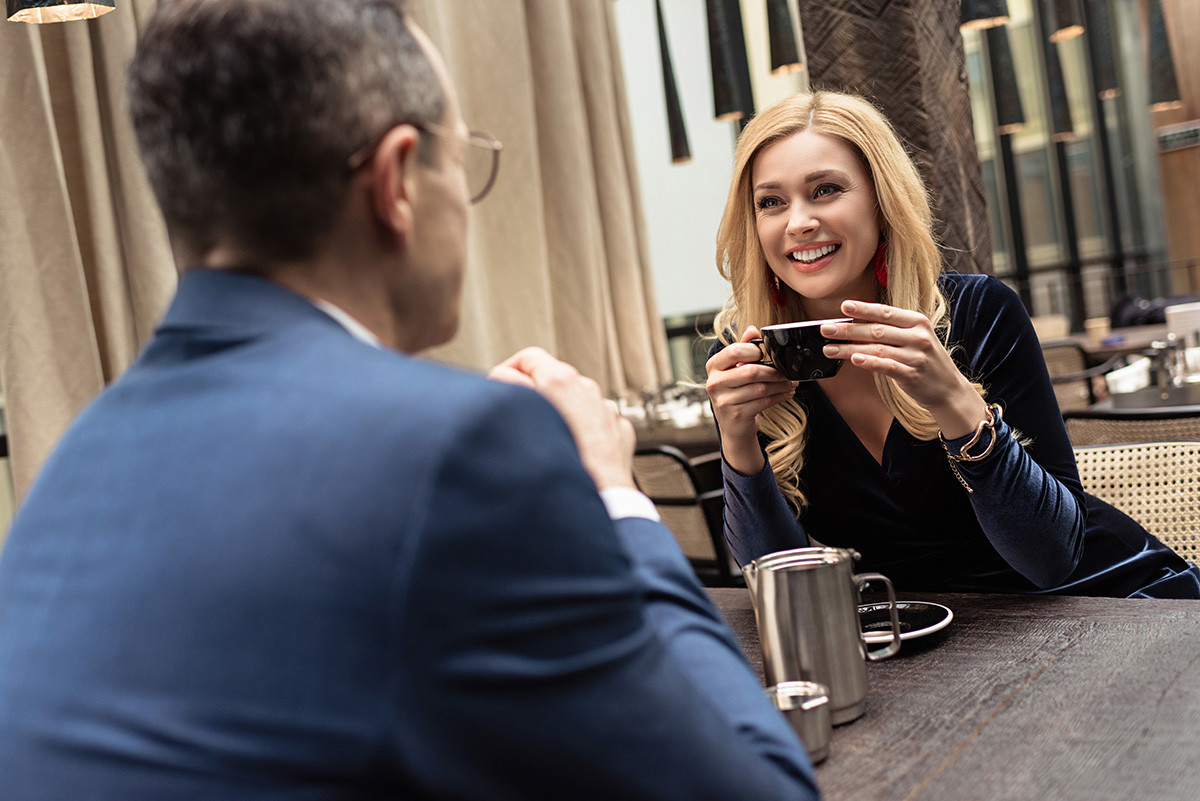 Sergey advocates traditional relationships, where the man is the head of the family. In his view, this concept should be enshrined in Russian law. All the same, he has no end of female clients. For half an hour in a small Moscow coffee shop, he explains that a woman should never contradict a man, that half of all people cannot find their other half due to problems with their parents, and that I am “not the most hopeless case, because [I’m] smart with an all-right face.” Leaving his business card and giving me a day to think about it, Sergey says goodbye and sits down at the table opposite another woman. When I exit the cafe, I hear him say to the pretty redhead of about 35: “So how many relationships have you had?” Remember, all men want virgins...”

“I once returned home from work at night, my heart was pounding so heavily I knew that if I sat down I’d never get up again,” a thin, bespectacled young man recounts calmly, pouring himself a cup of herbal tea. There are six women and 13 men in the cafe. The guys take turns to sit down in front of the ladies. Each pairing has five minutes to chat before the guy is uprooted and moved on. This is my first partner of the day, and yes, he’s decided to tell me how work nearly killed him.

“Did you ever experience anything like that?” he asks enthusiastically. I’m trying to remember, but the only story that springs to mind is how a couple of years ago I got stuck in a snowdrift and couldn’t move for about five minutes. 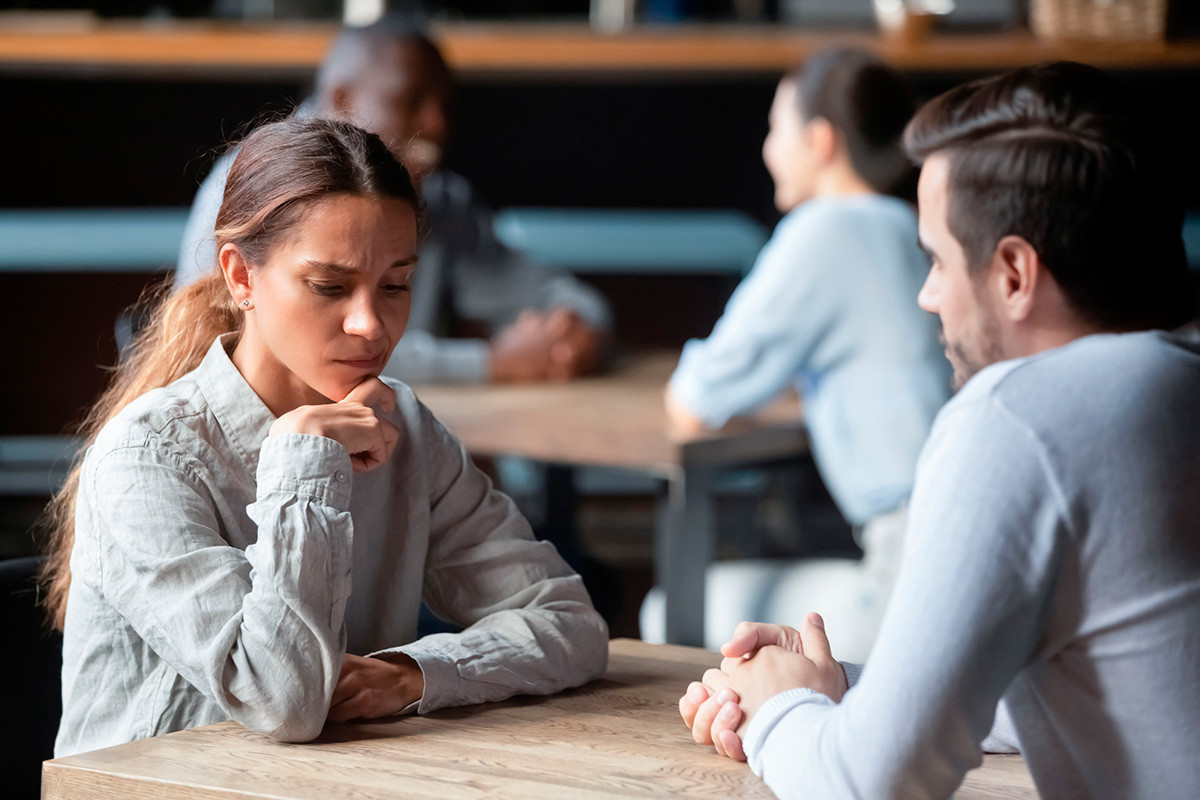 “So if you hadn’t been saved, you could’ve frozen to death, and then you wouldn’t be here today?” responds the wannabe Romeo, and laughs out loud as if I were telling a joke. Sensing that I’m talking to something closer to a maniac, I mentally rate him a big fat minus. Fortunately, the tortuous five minutes are up, and the next partner is taking a seat opposite me.

About 90 minutes later, I have talked to four programmers, one military man, one yob, one college student, and… By the fourth partner, you forget who you talked to five minutes ago; by the tenth, your head is throbbing and you’re aching to get back home.

“You must be worn out? Sorry I'm the last, I probably won’t be much fun,” the final guy sits down. Short and plumpish, and another programmer, he is not at all to my taste. But he is extremely polite with kind eyes.

During our 5-minute exchange, he tells me a story that almost makes me cry. The other week he went on Tinder and met a girl who invited him to meet up in a cafe. She showed up, ordered coffee, and disappeared, and he was landed with a huge bill (not just coffee). When he refused to pay, two meatheads appeared, took him outside, beat him up, and stole all his cash. 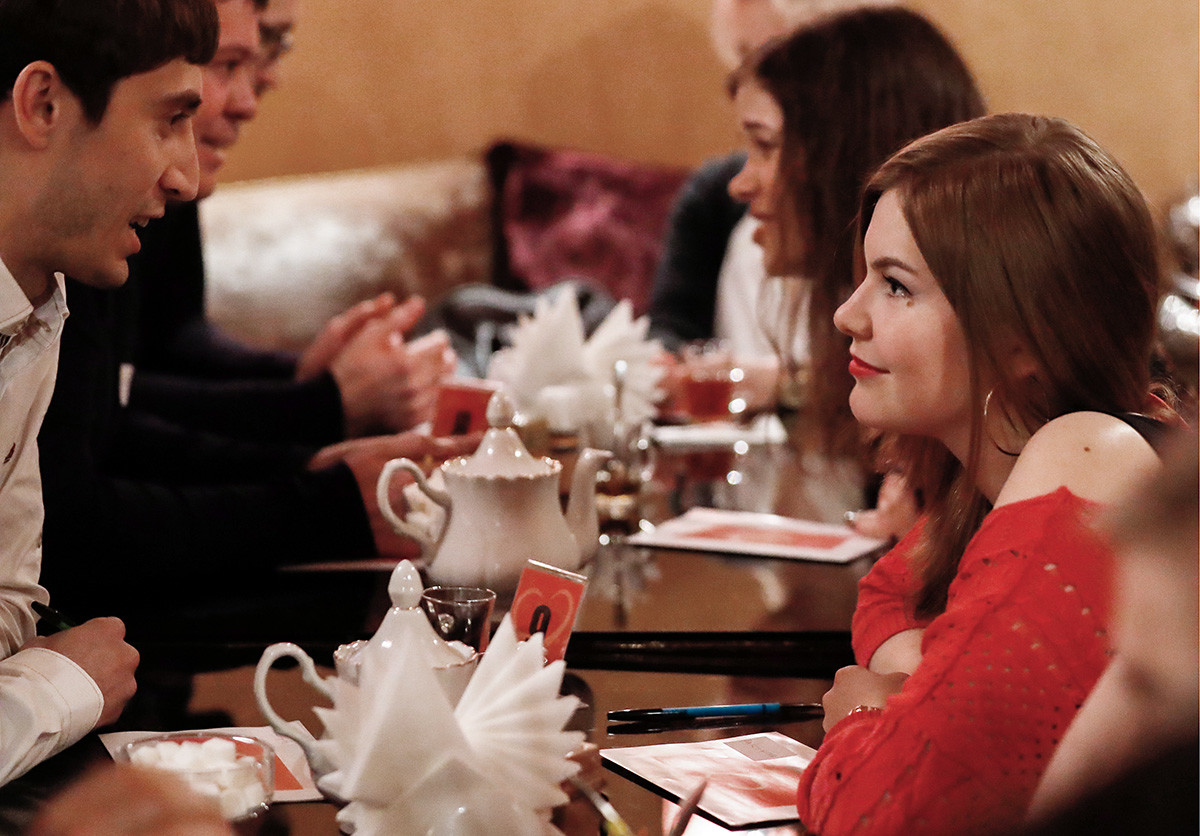 “So that’s why I’m here. I’m unlikely to find anyone, but at least I won’t get beaten up,” he says. I know that pity is not the best emotion — and that he could be lying for all I know, but I can’t help holding his hand for the rest of our brief encounter, trying to cheer him up somehow. He is the only fellow speed-dater I bother to contact afterwards.

Over the working week, I met lots of men, but none that were boyfriend material. Some were brutes, others plain weird. But that doesn’t mean they don’t deserve to be happy — just that they are intended for someone else, not me. And although I didn’t find a guy for a relationship, it seems I did at least find a friend.