Yuri Gagarin’s wife died. Who was the woman behind the man? 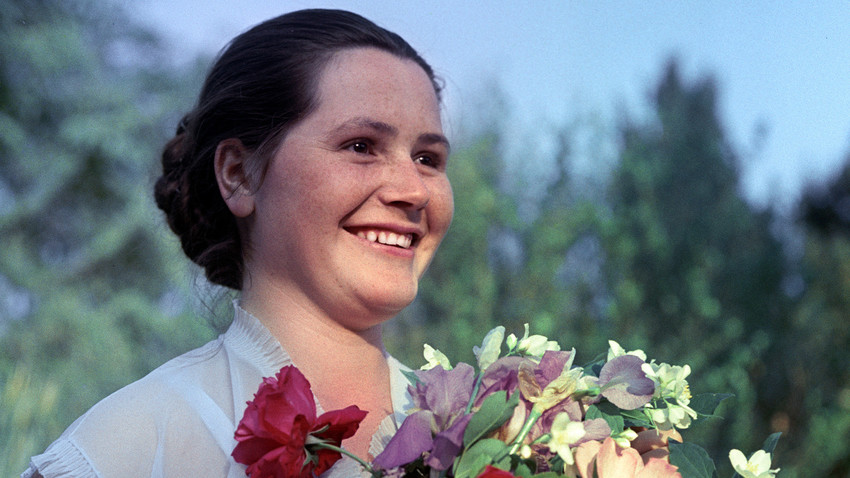 Wife of Yuri Gagarin, Hero of the Soviet Union, the USSR pilot-cosmonaut, Valentina.

Yury Abramochkin/Sputnik
Despite being adored by millions of women, Yury Gagarin only truly loved one.

“I loved everything about her: character, small height, brown eyes full of light, and braids, and a little, slightly freckled nose...” The world’s most famous cosmonaut Yuri Gagarin said about his wife, Valentina. She passed away on March 17, 2020, at the age of 84. 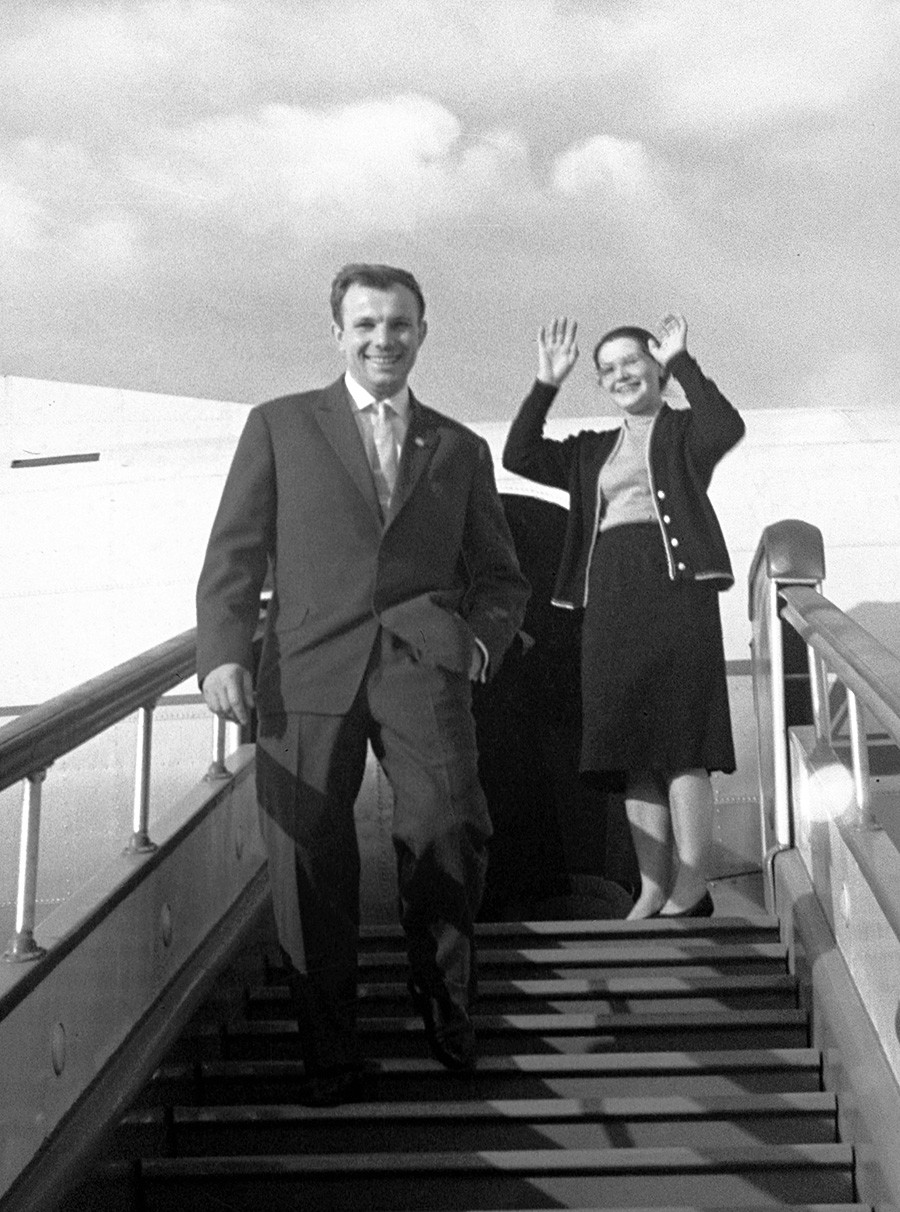 They met for the first time when they were both in their twenties during a dance evening at the Orenburg aviation academy and immediately fell in love. 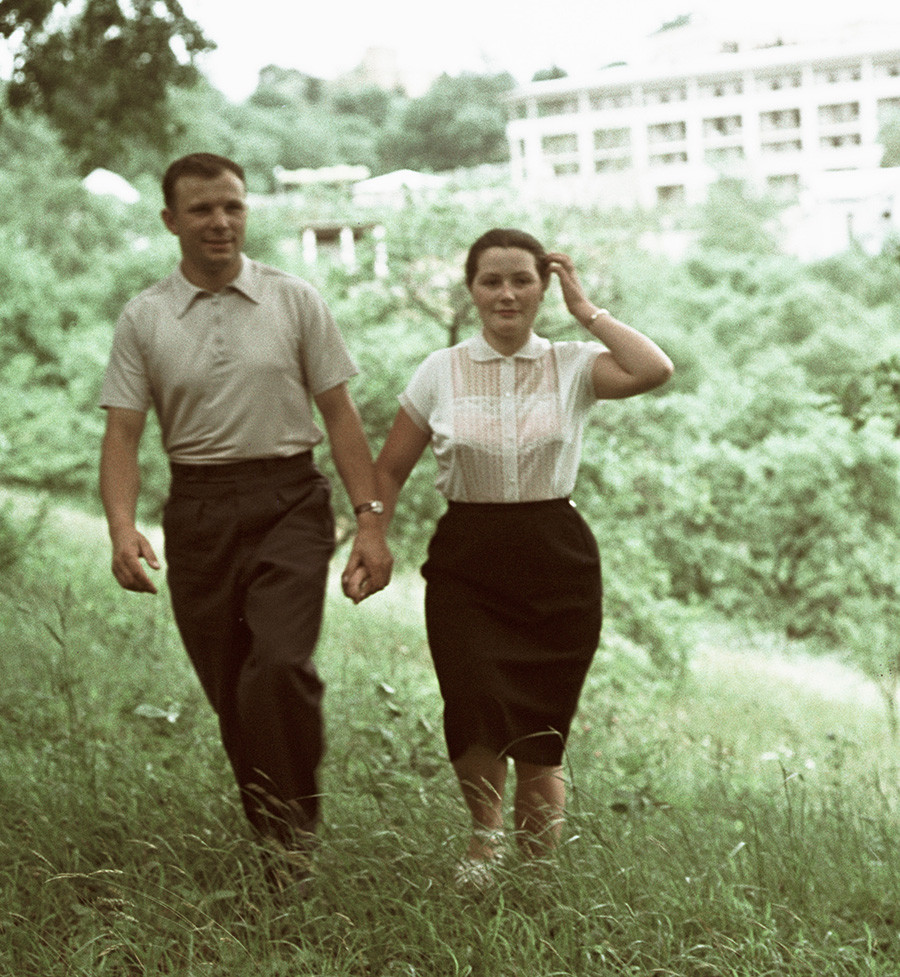 Yuri and Valentina were happily married for 11 years until Gagarin died in an air crash on March 27, 1968. The couple is survived by two daughters: Yelena and Galina. 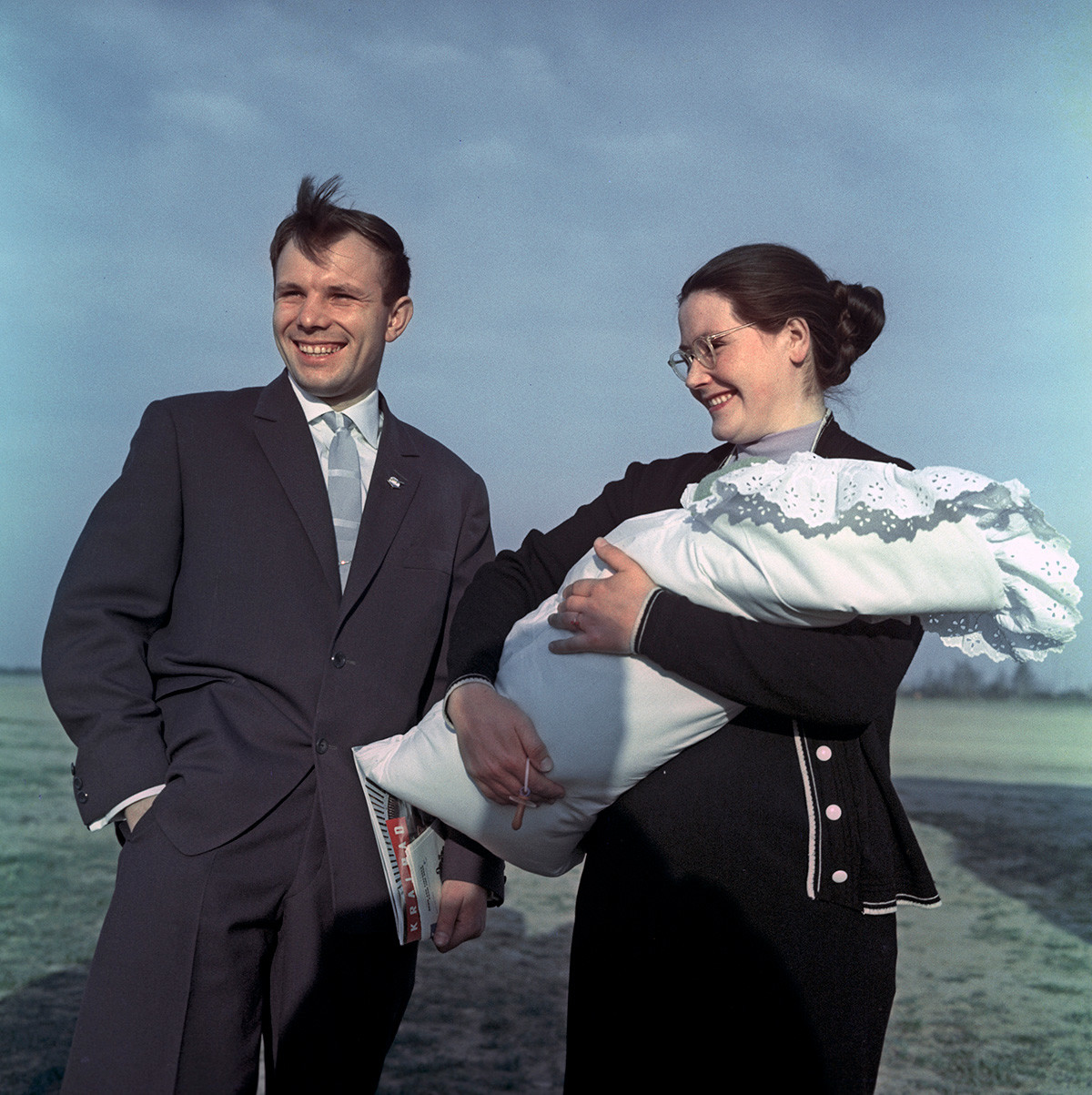 Yuri Gagarin with his wife Valentina and daughter Galina on May 1, 1961. Galina works today as an economist.

“Much connected us with Valya (short for Valentina). Love for books, passion for skiing, infatuation of the theater...” Gagarin wrote. 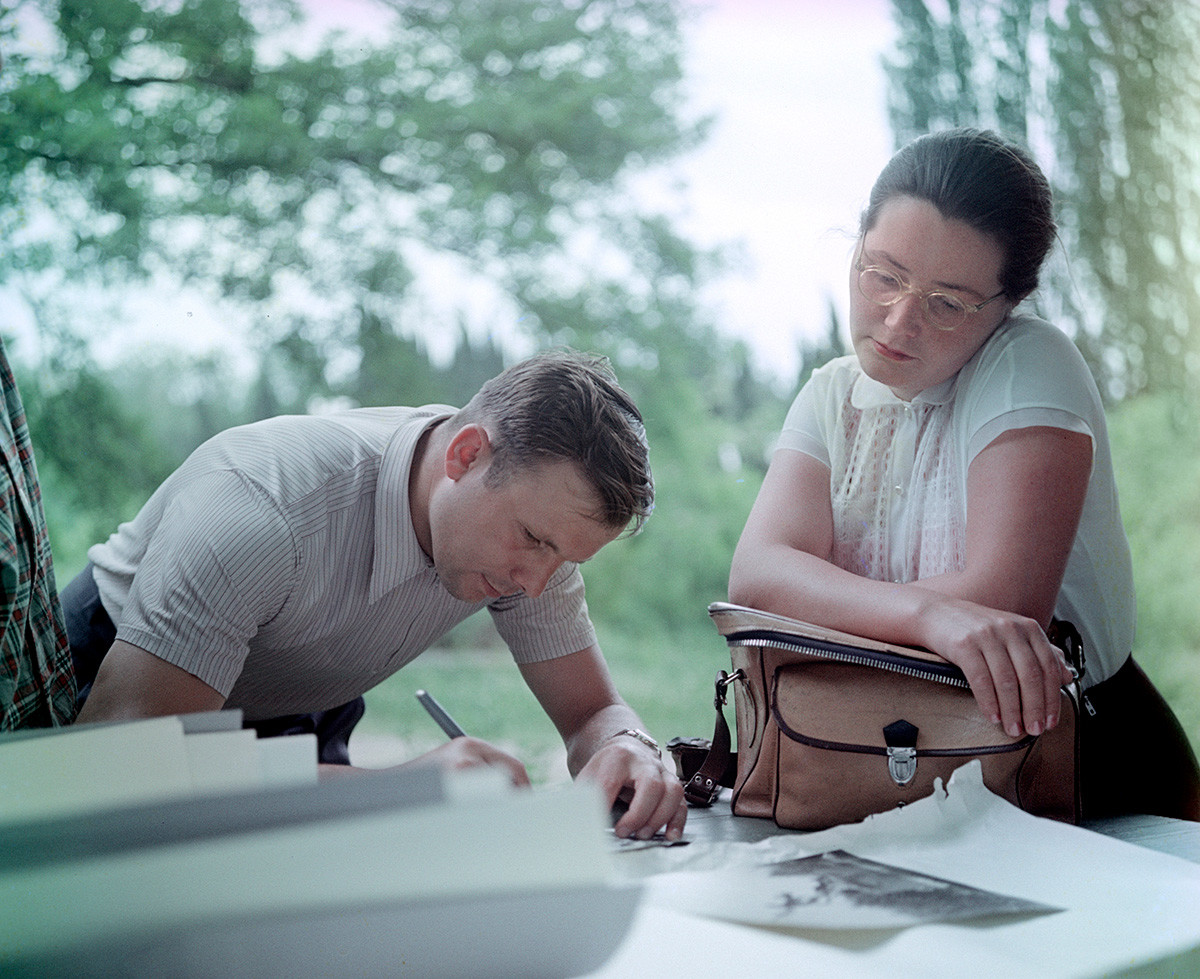 They lived a modest life of a common family, until Gagarin’s historical flight on April 12, 1961, which suddenly put them in the spotlight of global attention. Yuri and Valentina met world leaders, travelled a lot, participated in major events and got bags of letters daily. 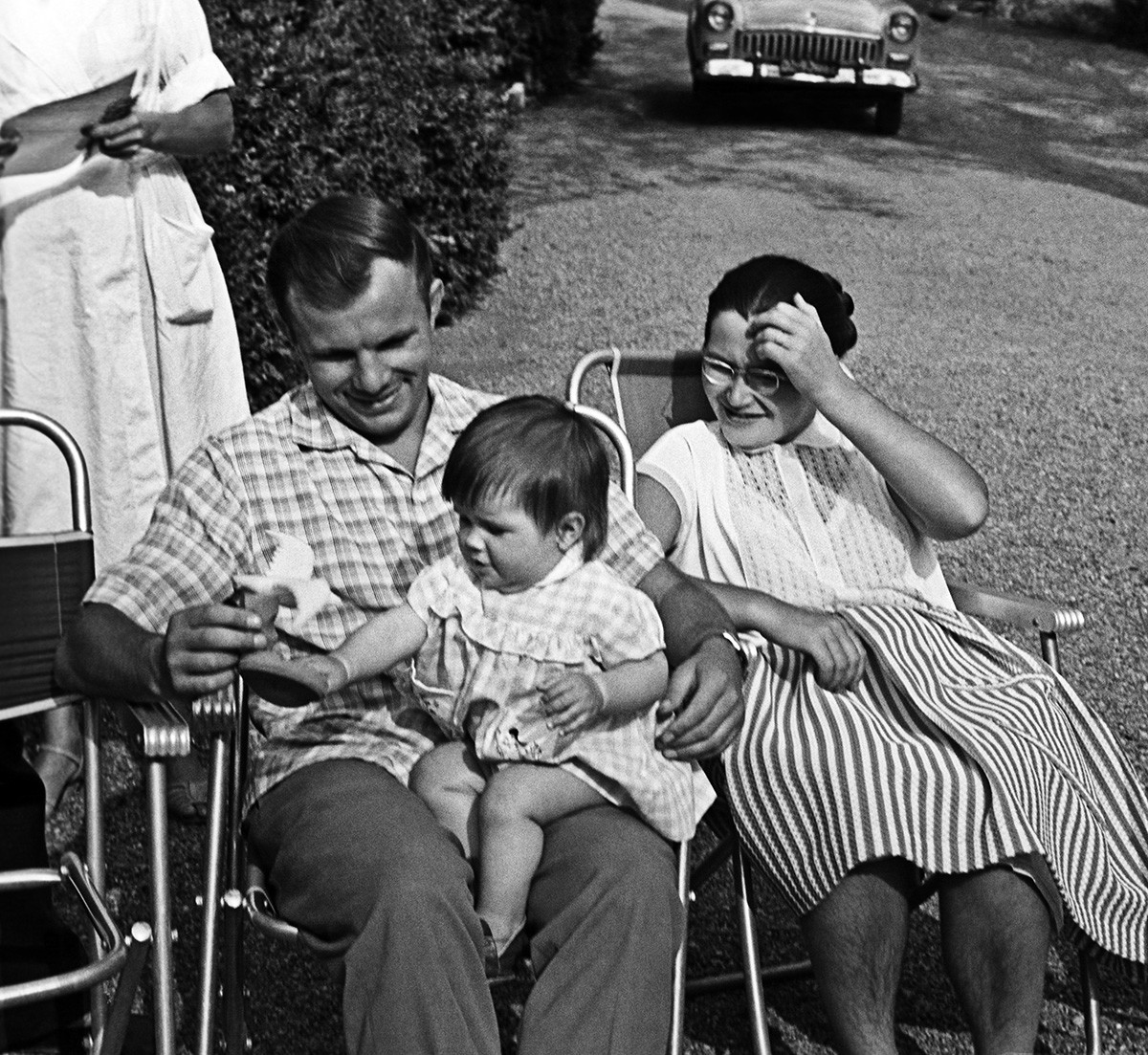 Yury, Valentina and their daughter Galina in Crimea on August 1, 1961.

This wasn’t an easy time for Valentina. Millions of women worldwide fell in love with her Yuri. Among them was the first sex-symbol of those times, Gina Lollobrigida. 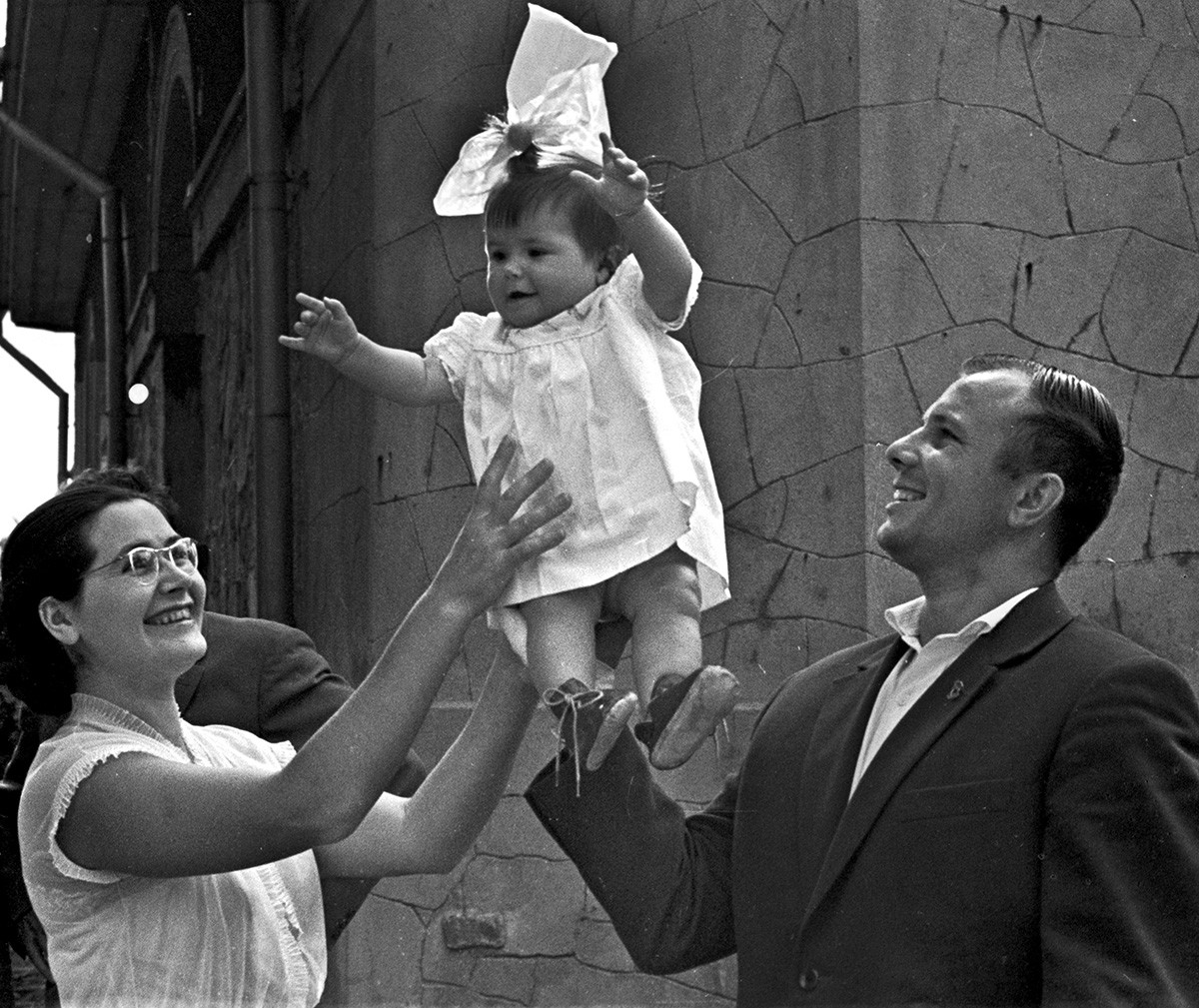 However, the Gagarins successfully passed the test of glory. Yuri always remained faithful to his girl “in the simple blue dress, shy and bashful”. 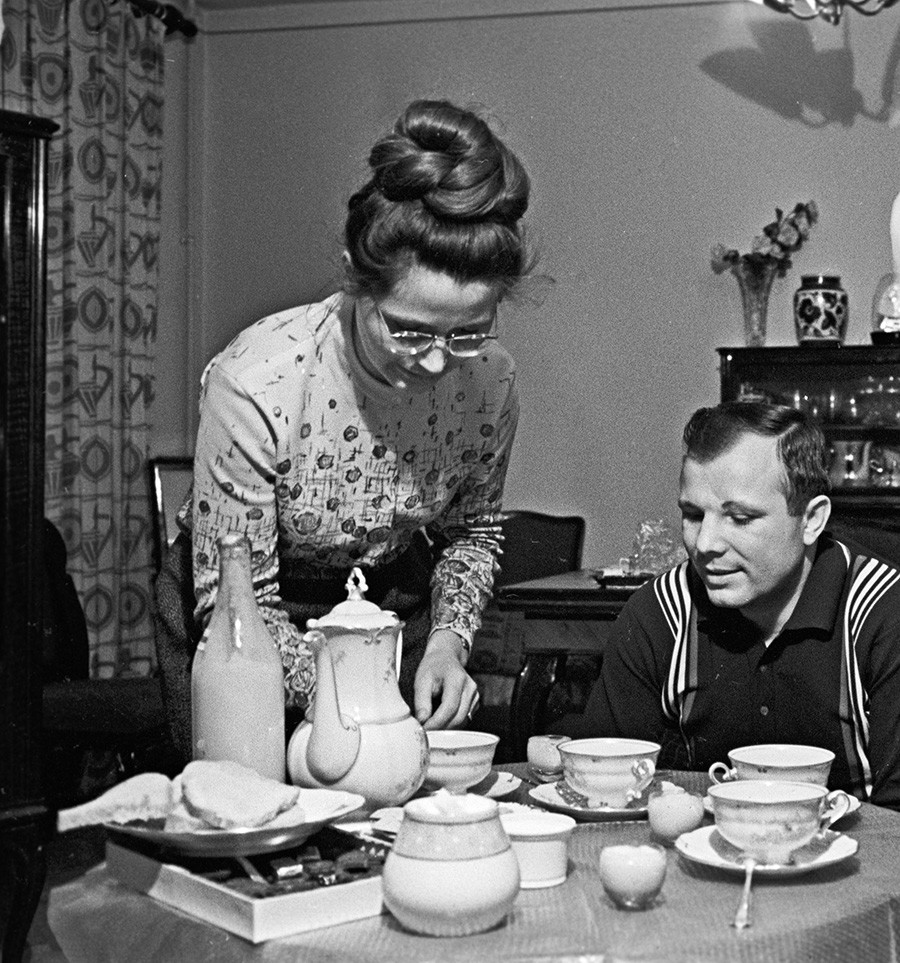 So remained Valentina to her husband after his death. She never married again. 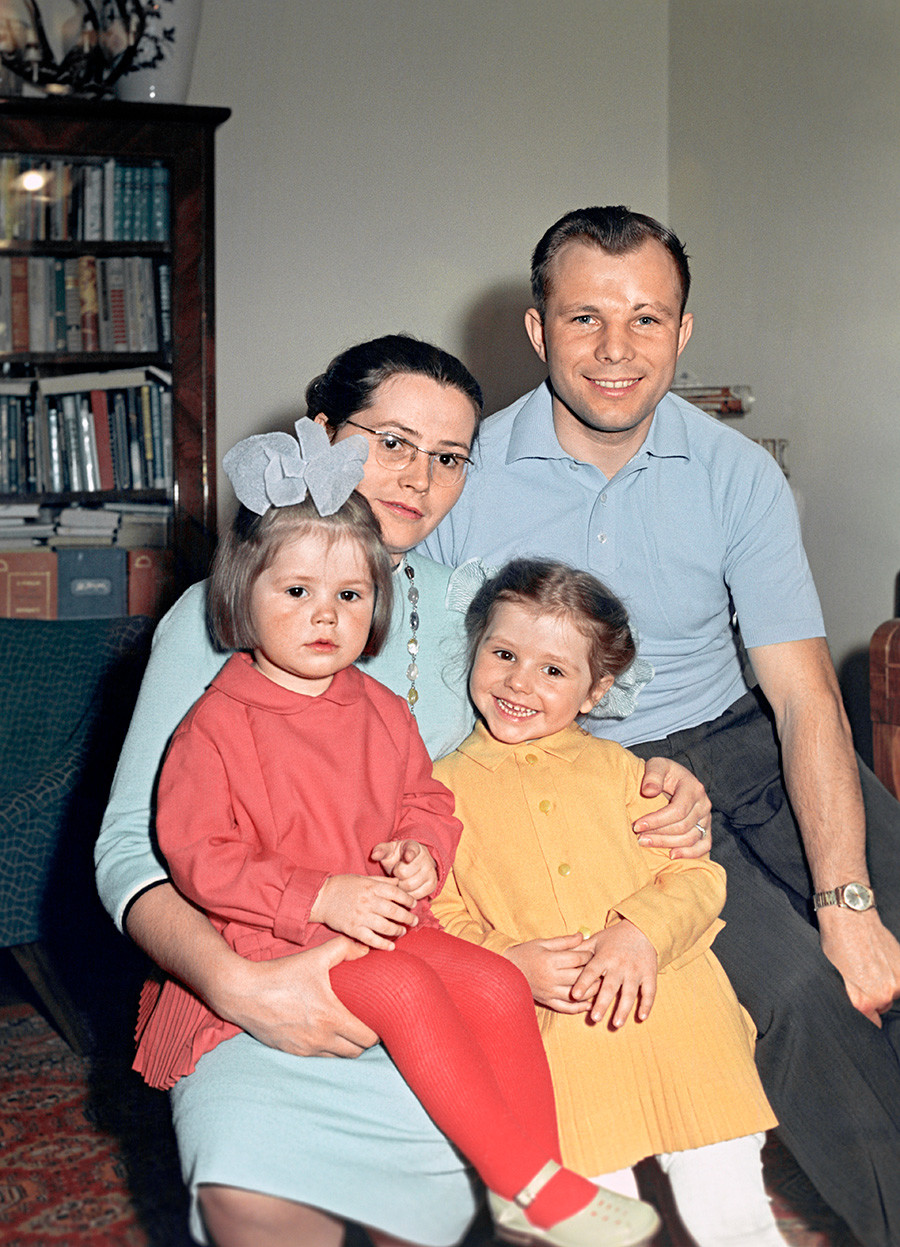 Yury and Valentina with their children on March 1, 1965.

As Yuri, Valentina Gagarina tied her life to space. Until retirement, she had been working in the Medical section laboratory of the Mission Control Center. Annually on her birthday, December 15, Valentina Tereshkova, the first woman in space, paid her a visit with an obligatory huge bouquet of roses. 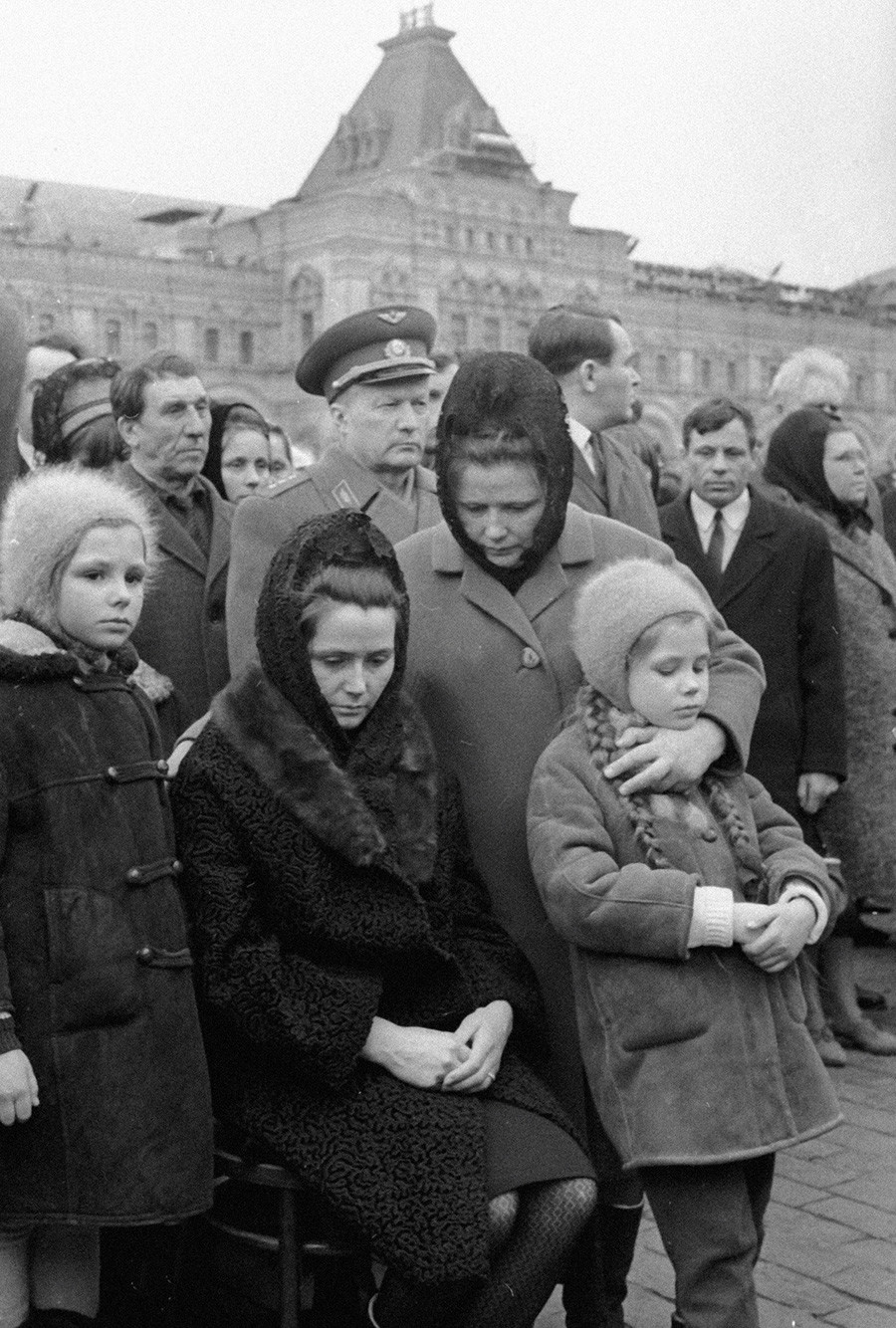 Valentina Gagarina (center) and her daughters attending the burial of Yuri Gagarin and Vladimir Seregin on Red Square on March 30, 1968. Yelena (l) is today the General Director of the State historical and cultural Museum-reserve Moscow Kremlin Museums.

Valentina did much to keep the memory of Yuri Gagarin: she participated in memorable ceremonies, contributed to the establishment of the Gagarin museum, published a memorable book called ‘108 minutes and the whole life’. However, she never gave interviews. 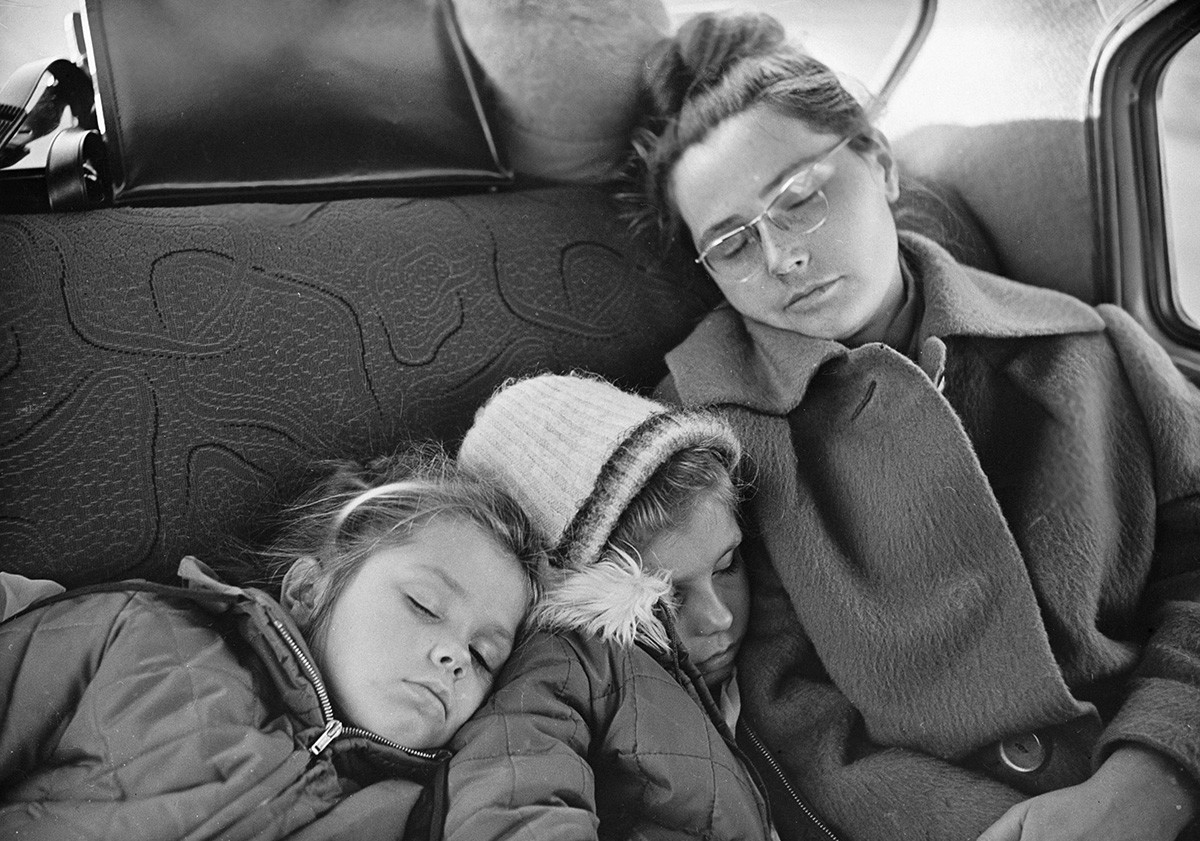 Yuri Gagarin's wife Valentina (right) with the daughters sleeping on the back seat on November 25, 1965.

“As a wife of the first cosmonaut she had a huge responsibility. Until her last days she carried this burden with dignity,” cosmonaut Yelena Serova once stated. 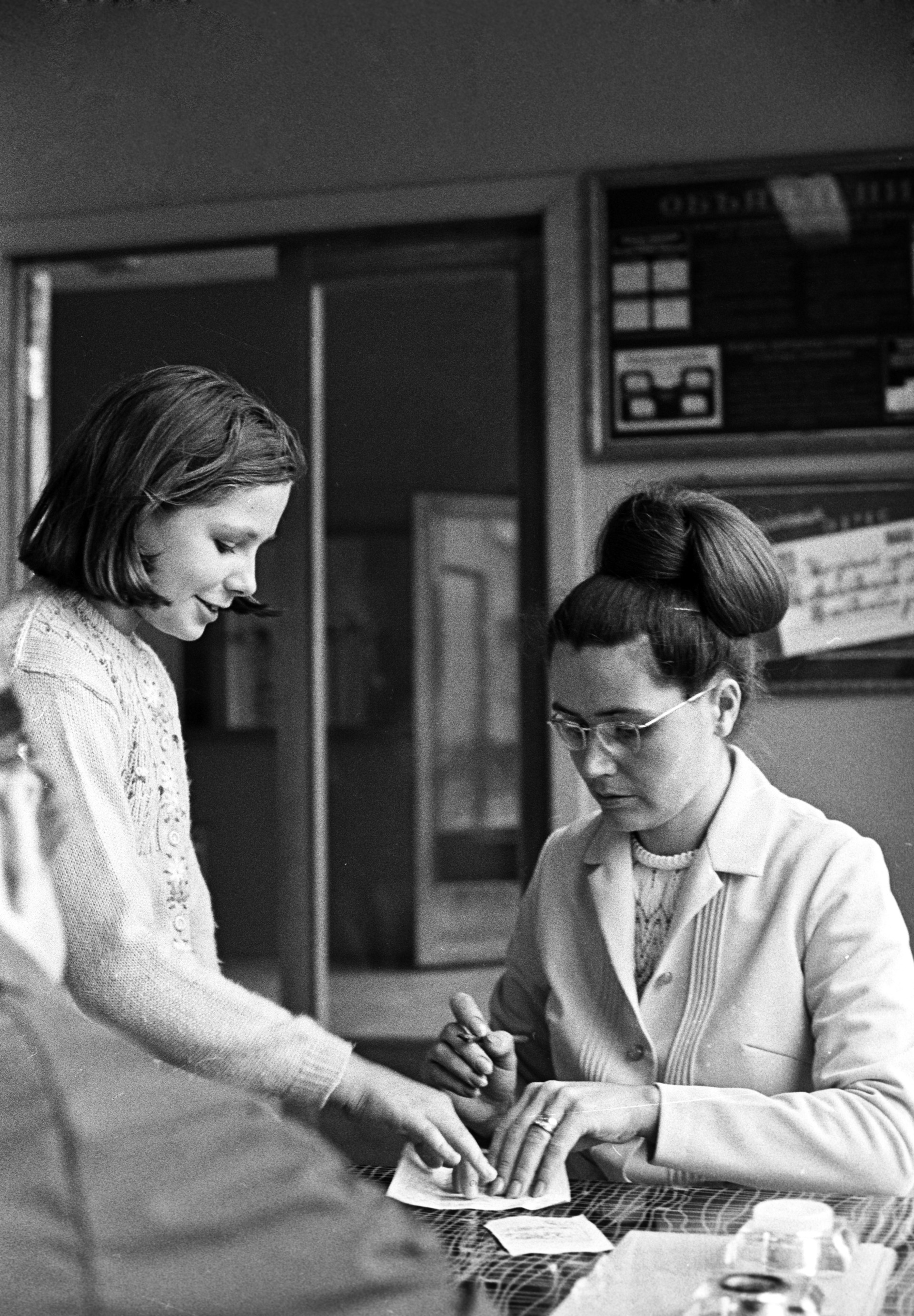 Valentina with her daughter Yelena on January 1, 1969.