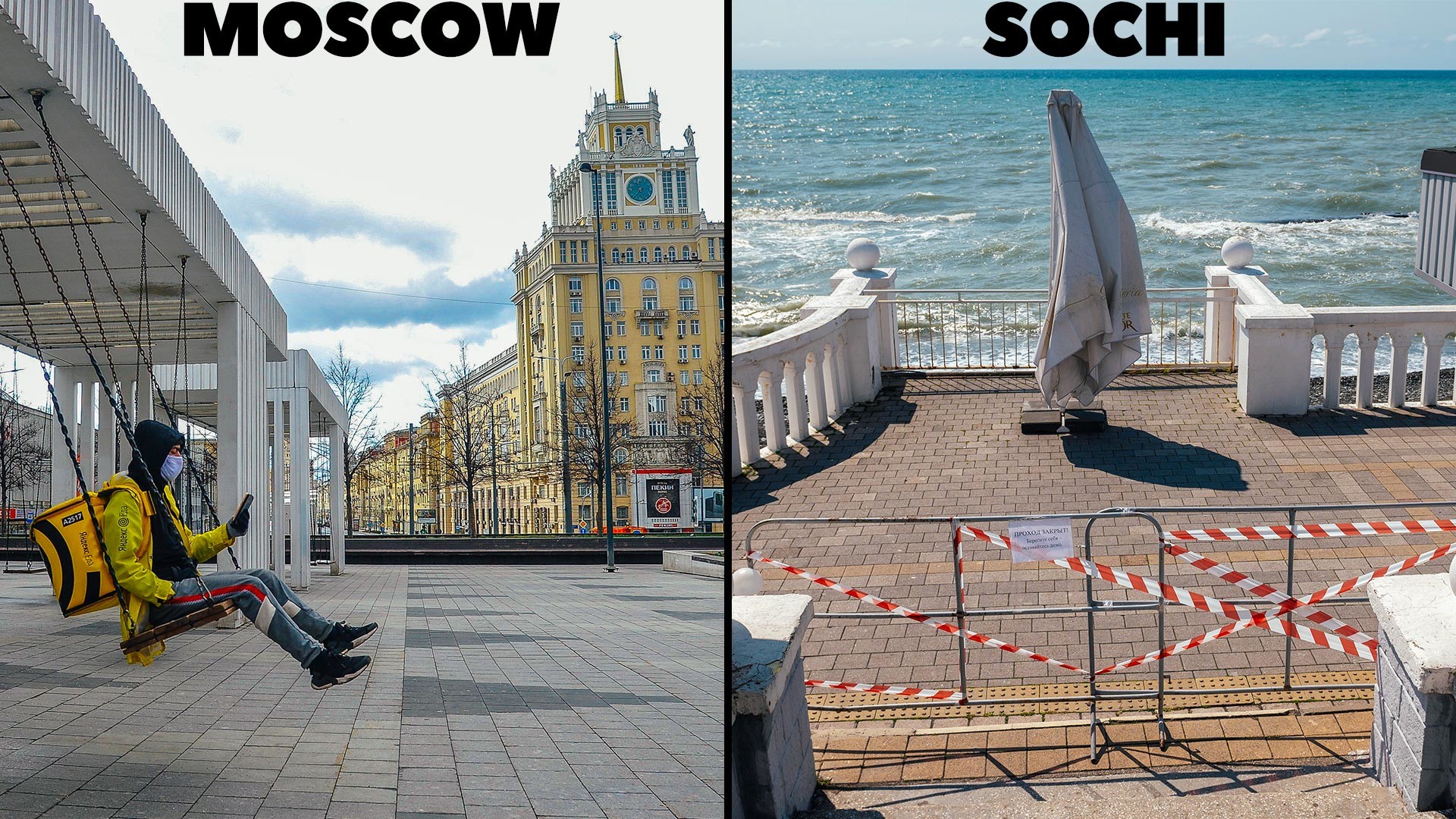 Alexander Avilov/Moskva Agency; Artur Lebedev/Sputnik
How Kazan, St. Petersburg, Grozny and other Russian cities look like without tourists or locals.

At the end of March, due to the coronavirus pandemic, most Russian regions imposed a “self-isolation” regime. It means that people should stay home, leaving it only to buy essential food and medicine. These used-to-be-crowded cities now look so empty. 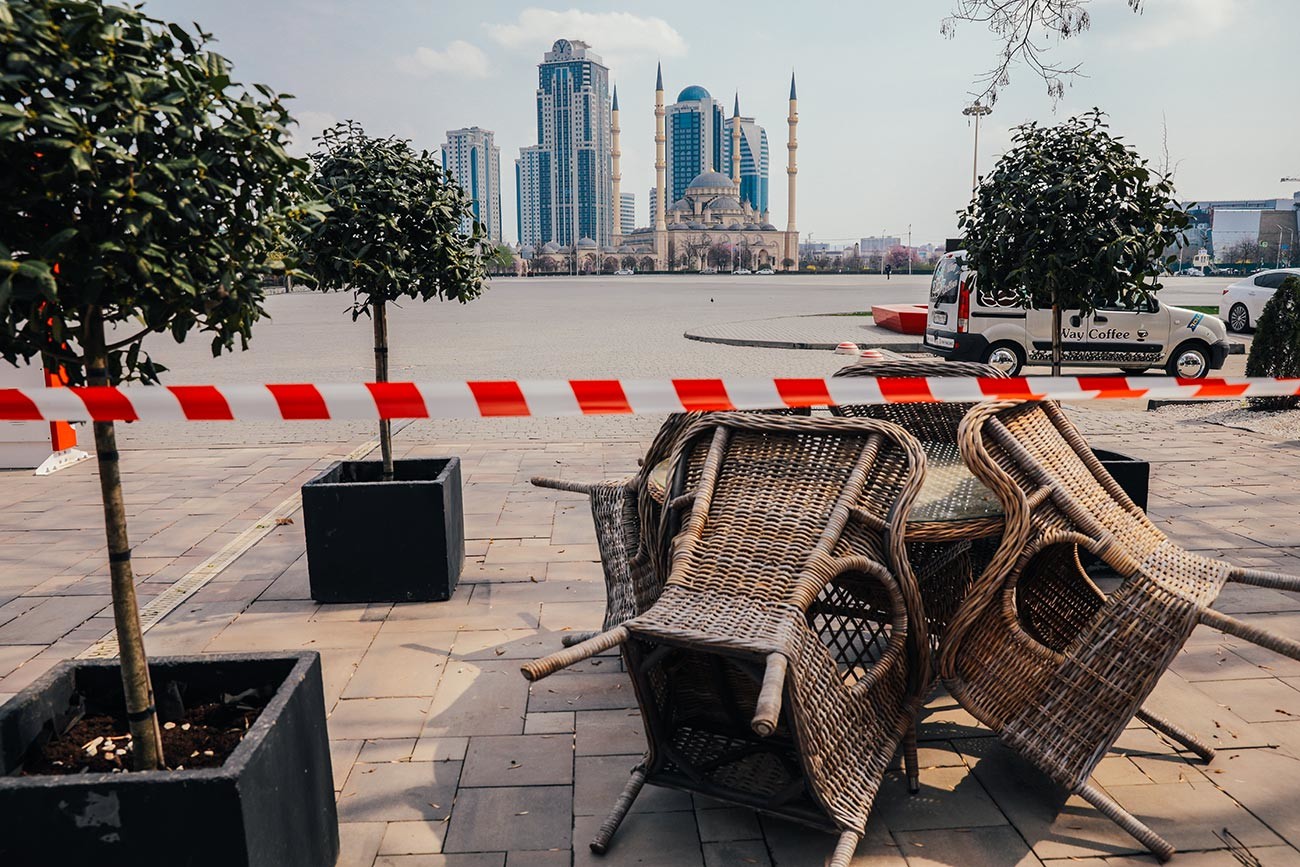 At the central Grozny.

Starting April 5, Chechnya has closed its borders for entry and exit of personal vehicles. The ban does not apply to emergency services and the transportation of essential goods. Citizens are reminded to stay home by volunteers with megaphones. As of the morning of April 8, 22 coronavirus cases have been registered in the republic, with one fatality. 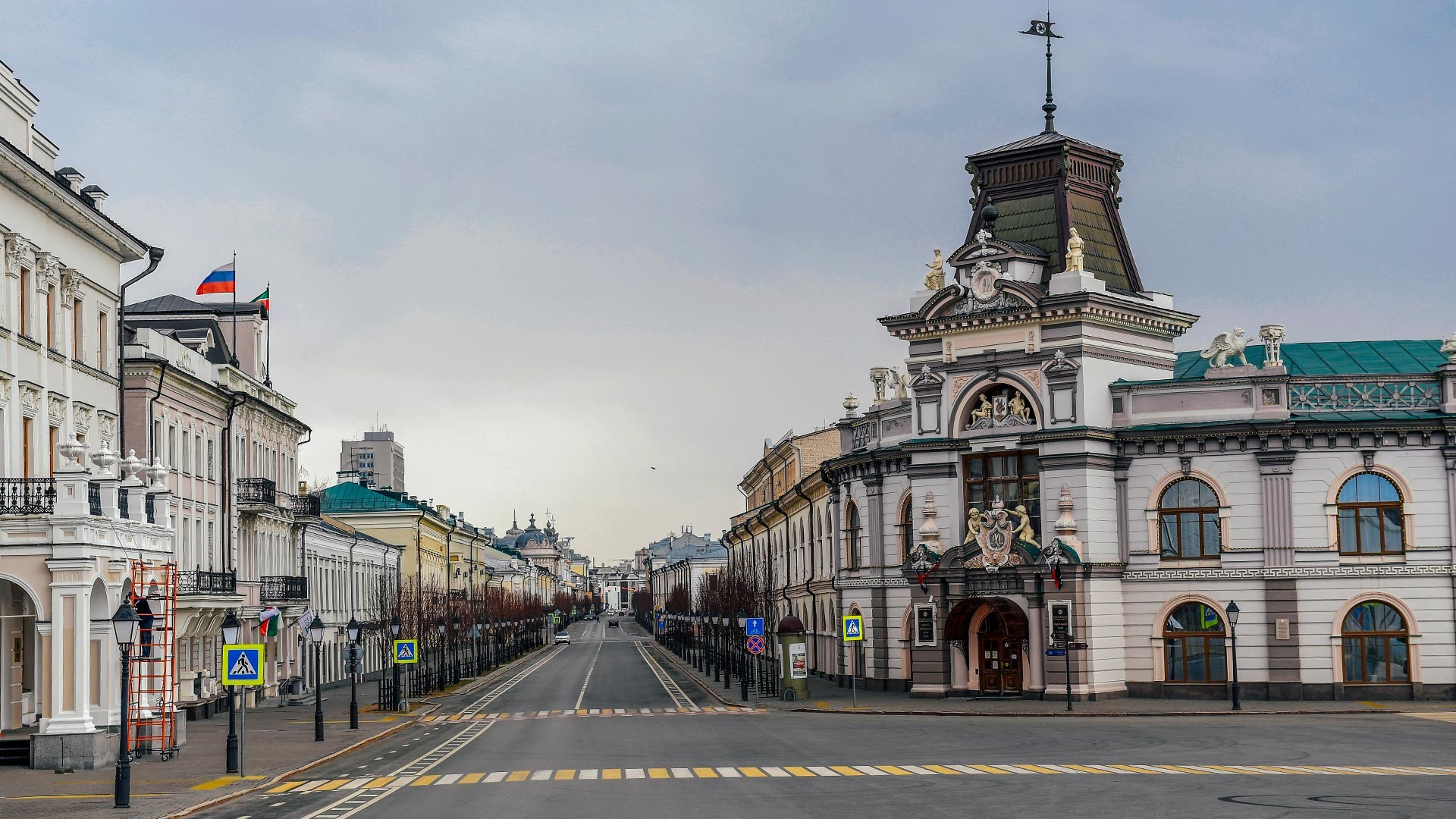 In Tatarstan, a person can leave home only by sending an SMS with their passport number, their place of self-isolation and the reason for the exit. If deemed eligible, they should receive a permit via SMS. A person is allowed no more than two permits in one day. Without permission, you can only go outside for a walk with a dog (no more than 100 meters from home) or a trip to the nearest store. There are 41 coronavirus cases registered in Tatarstan. 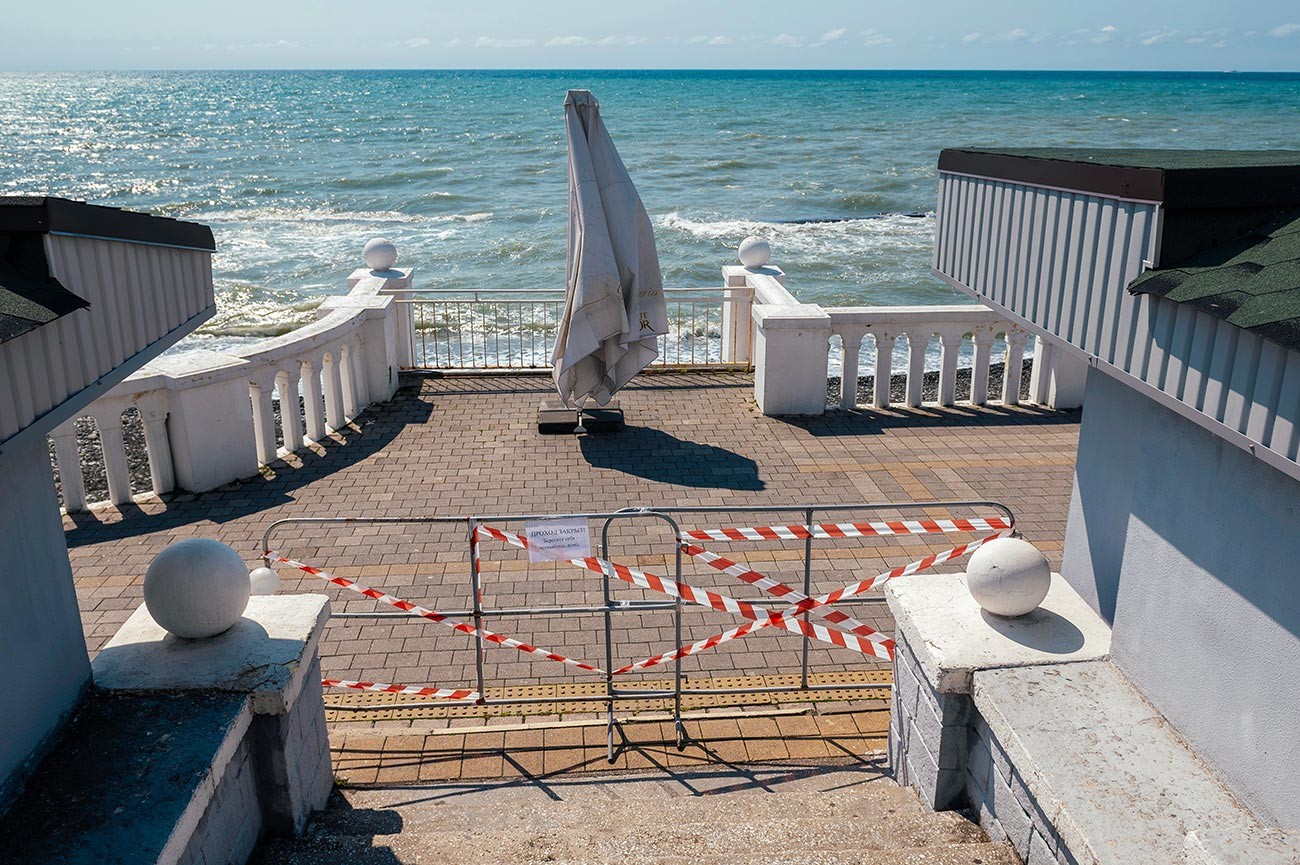 The resort city of Sochi closed all its sports and tourist infrastructure until June 1. Hotels are forbidden to accomodate people during the self-isolation regime. In the Krasnodar Territory, 85 cases of coronavirus have been confirmed. 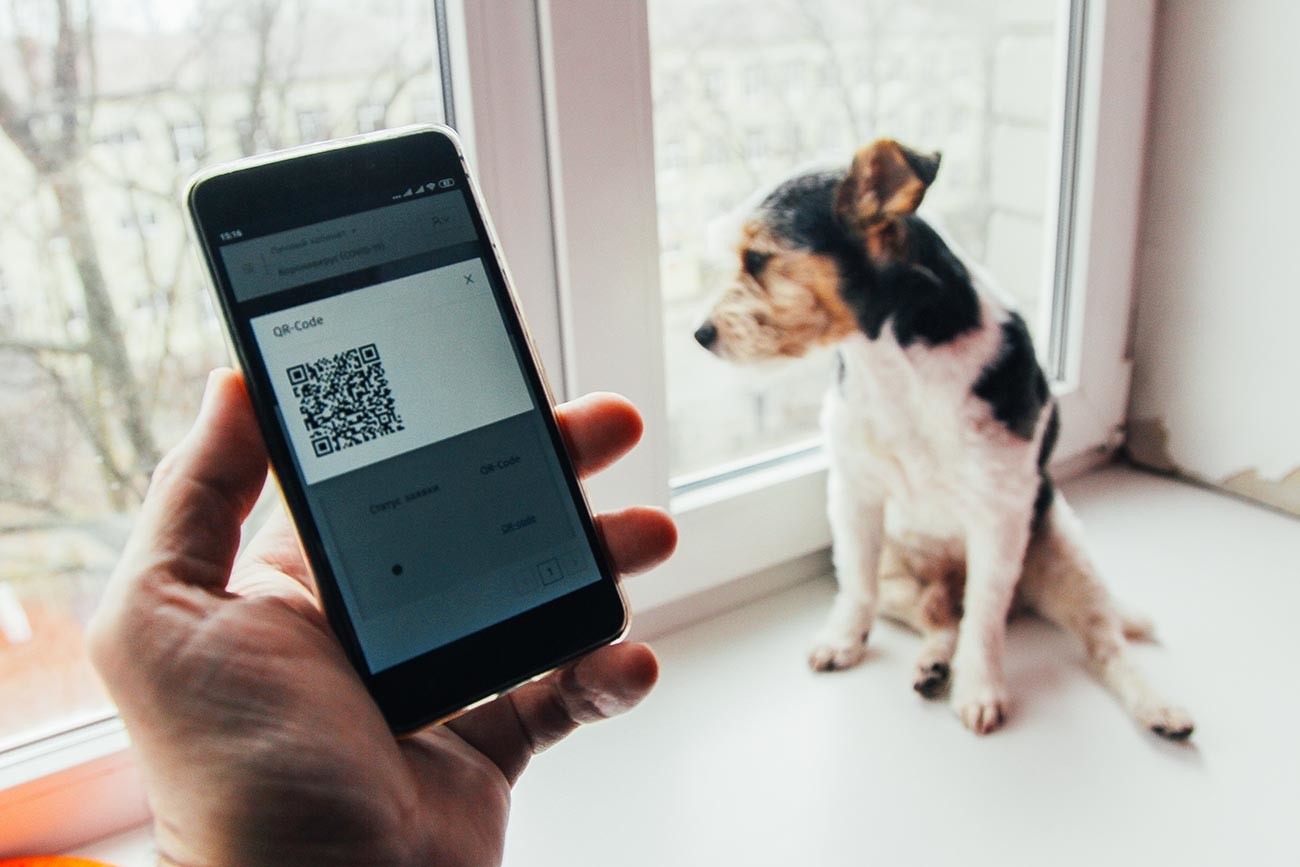 A resident of Nizhny Novgorod gets the QR-code to leave the house.

In Nizhny Novgorod, residents must download a QR-code from the local administration’s website and show it to police on a smartphone if stopped. They need one to even throw out the garbage - but for this they will have a whole 30 minutes. For “grocery shopping” - no more than three hours. The permit can also be ordered by phone: an SMS will be sent to the mobile. 80 cases of virus have been registered in the region. 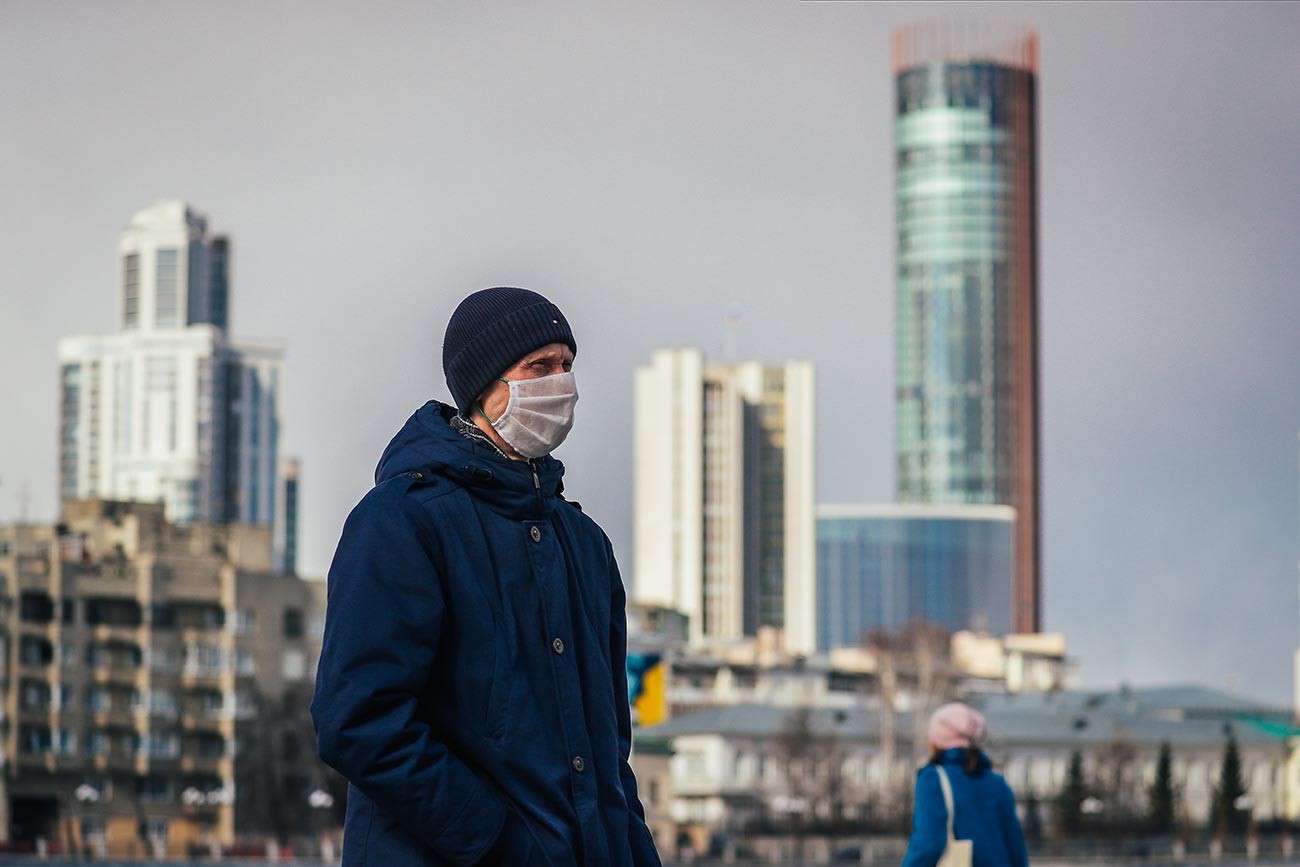 Near the Yekaterinburg city.

In the Urals capital, all parks and non-food stores are closed and people are reminded to stay at home. The megapolis got rid of its traffic jams, which made car enthusiasts very happy. According to local media, on the very first day, road cameras recorded 8,000 cases of speeding! There are 56 infected people in the region, while 25 have recovered. 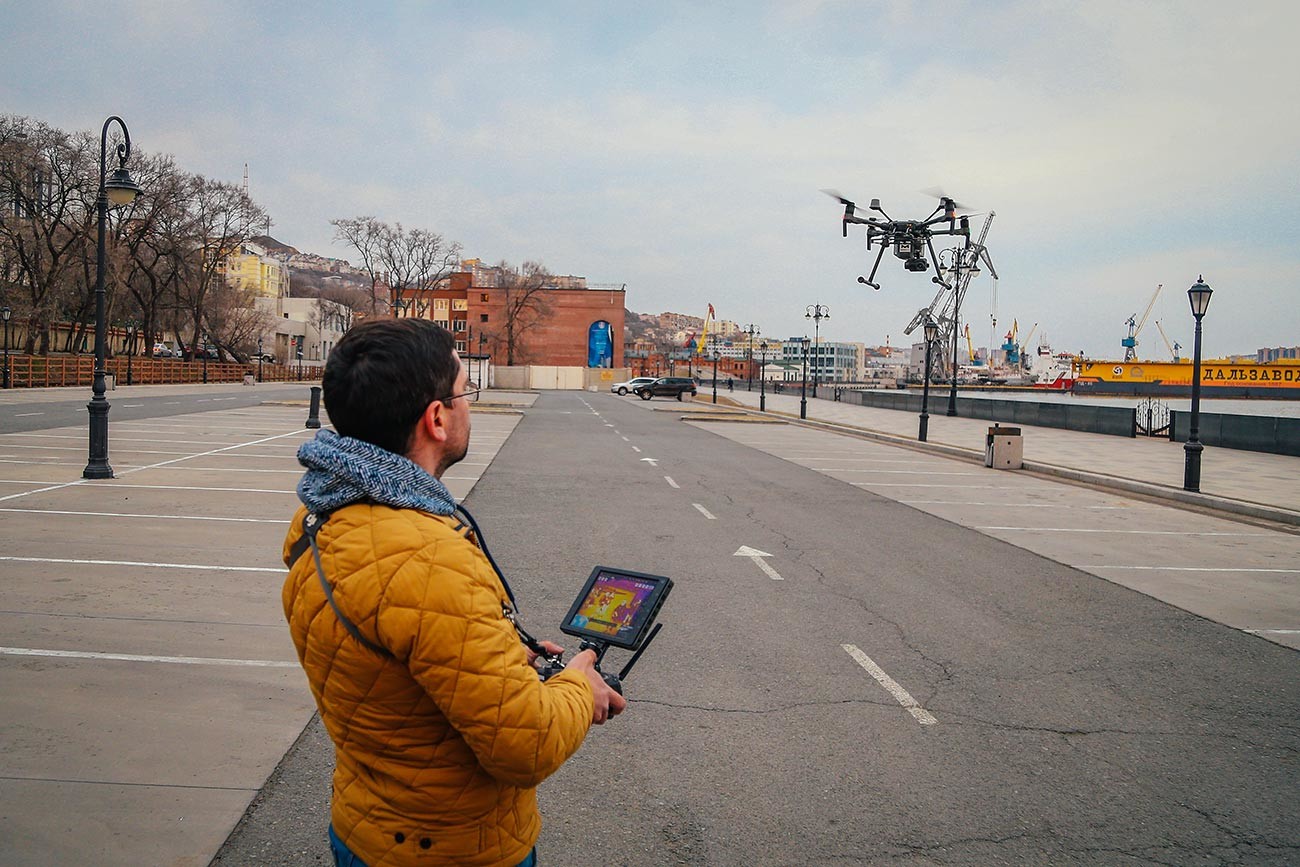 The test flight of the drone that should observe the self-isolation regime in Vladivostok.

Since April 7, the Maritime Territory has imposed an SMS system to those who need to leave the home for work. In addition to a permission via SMS, a person must carry their passport and a request from their employer. The compliance of the self-isolation regime is monitored by drones. 15 cases of coronavirus have been registered, with two deaths. 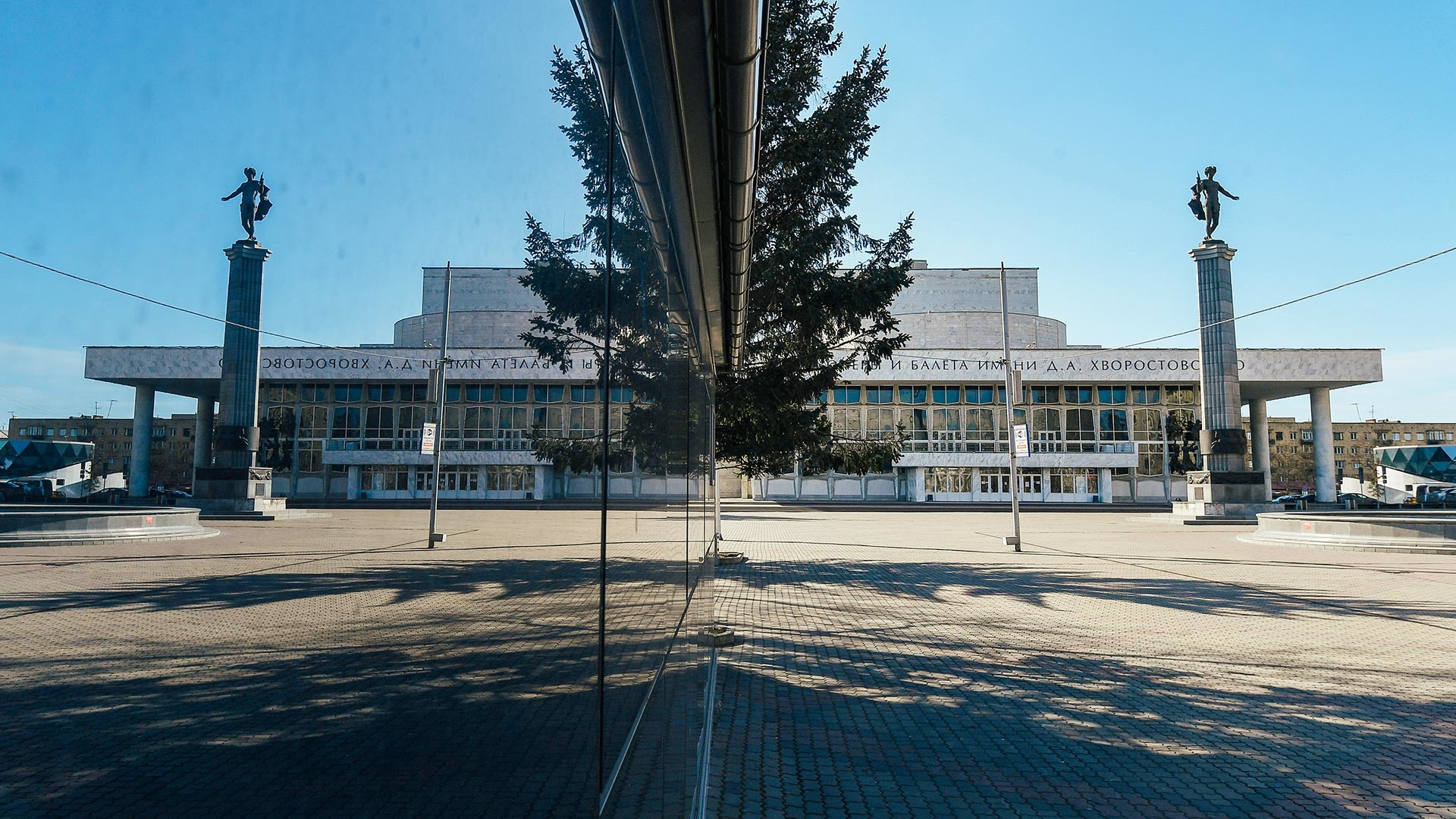 Residents of this Siberian city who need to visit the office, must have a permit from their employer. Everyone else should be self-isolated at home. And to leave home in an emergency, a person has to write an explanatory note and show it to police. Otherwise, they may face a fine of 3,000 rubles (ca. $39). 39 cases of coronavirus have been registered in the region. 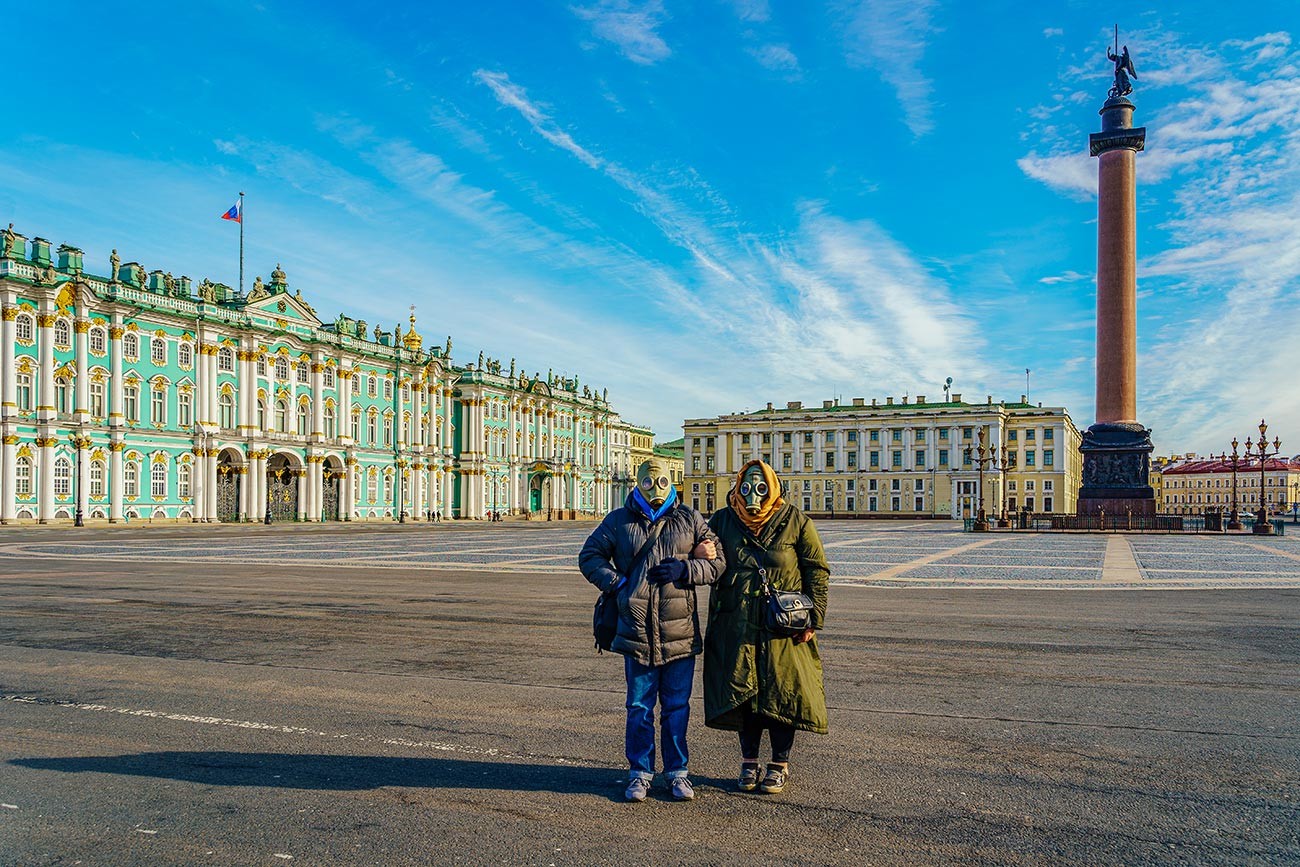 The Palace Square in St. Petersburg.

The most popular Russian city among many tourists has banned all outdoor events, including tours. On the streets, it is recommended to observe a distance of 1,5 meters. Schools and universities have been sent to online education. Many public transport routes have been halted (except for the metro). St. Petersburg is considered the third most infected territory in the country. On April 8, 329 cases were confirmed, with two deaths. 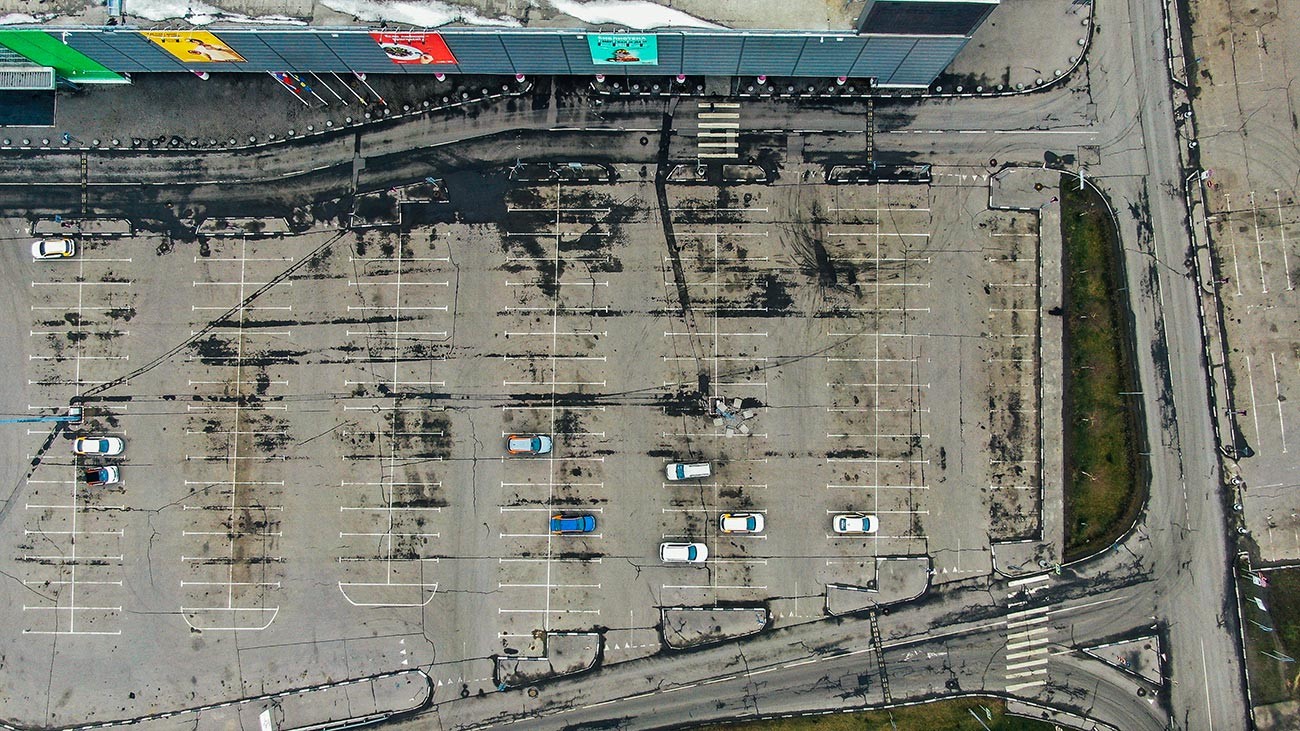 The parking at the Mega mall outside Moscow.

Moscow Region is the second most infected region in the country. As of April 8, 549 cases and 10 deaths have been registered. Some of the country’s largest malls are located there, and which are now empty: only grocery stores and pharmacies are open, but there are few people frequenting them. 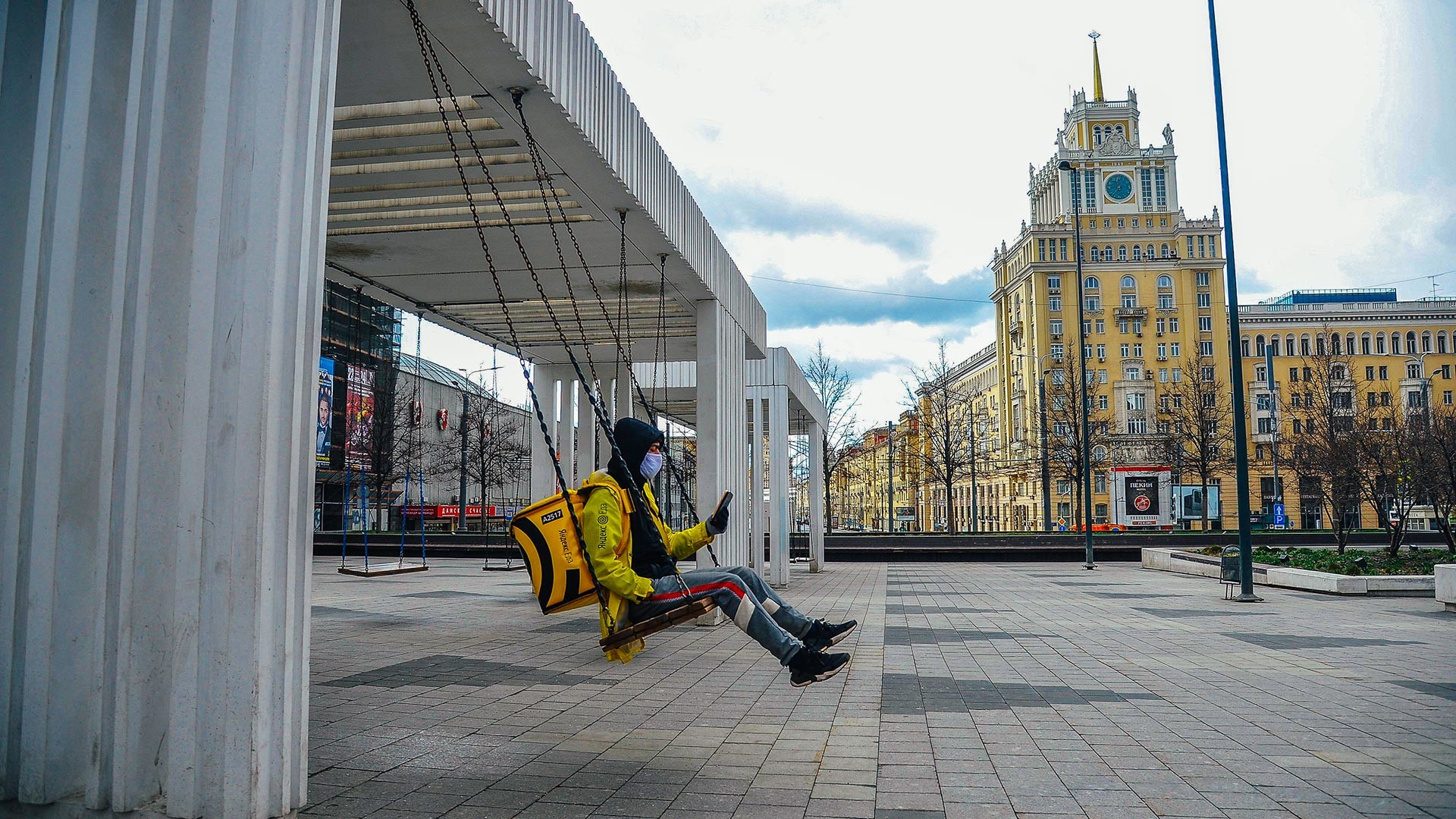 Near the Mayakovskaya metro station.

Two-thirds of all coronavirus cases in Russia have been registered in Moscow: 5,841 of 8,672 infected and 31 of 63 dead. In the Russian capital, most people have switched to online work and stores and restaurants have shifted to deliveries. While locals are at home, the city is engaged in the disinfection of streets and public transport. The number of passengers in the metro and buses has decreased by 80%, the number of personal vehicles decreased by 50% and the number of road accidents decreased by 86%, compared to the same period last year. For violations of the self-isolation regime, persons could face a fine of up to 4,000 rubles (ca. $55).