Putin's face to adorn a Russian military mega-church outside Moscow 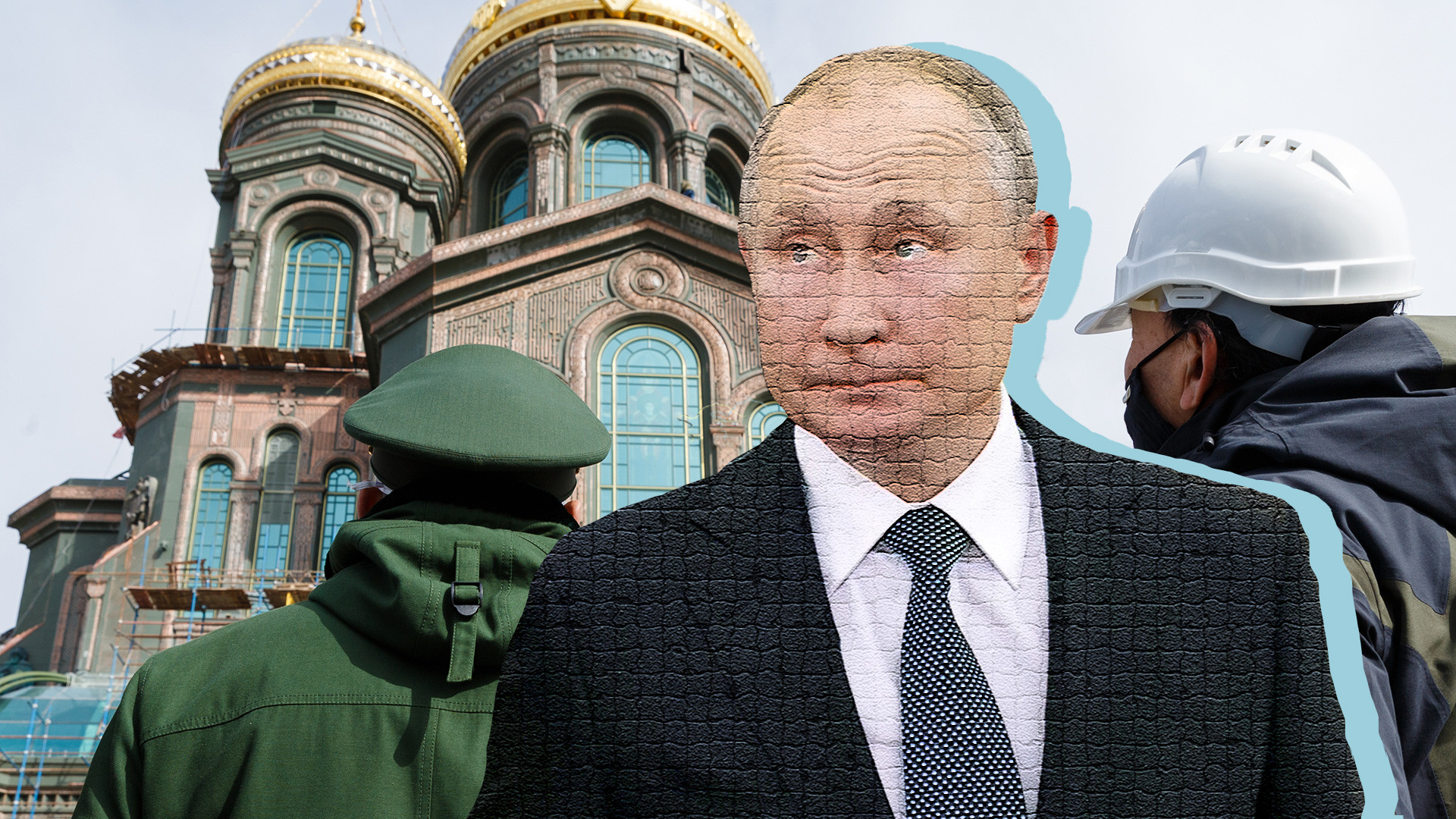 Vadim Savitsky/TASS, AP
In addition to the head of state, the cathedral will have mosaics with portraits of Stalin and other political figures.

UPDATED on May 1st: The mosaic depicting Vladimir Putin has been removed from the church of the Armed Forces, following the president's comments that he did not yet deserve such a tribute for his work, RBC news agency said.

The main church of the Russian armed forces in Patriot Park in Moscow Region will be decorated with mosaics depicting Vladimir Putin, Russian Defense Minister Sergei Shoigu, Joseph Stalin and other political figures, reported MBKh Media, citing an anonymous subscriber who sent the news agency photographs of the mosaics. The cathedral's rector, Bishop Stefan Klinsky, has confirmed to RBK news agency the existence of the mosaics in the church.

Another mosaic will be devoted to the Victory Parade of 1945. It features soldiers, marshals and a portrait of Joseph Stalin. A third mosaic is devoted to Crimea's rejoining Russia in 2014 and bears the inscription "Crimea is Ours".

"There is a tradition (of depicting political figures in churches - Russia Beyond) when historical scenes from some period of history are  represented. It is obvious that Crimea's unification with Russia is one such very significant event. The top state leaders who will be shown played a role in this unification. As for Stalin, most likely his portrait has been taken from a historical photograph. This cathedral is built in honor of the World War II victory and it cannot but depict the Victory Parade," cathedral rector Stefan Klinsky explained to RBK.

According to the bishop, the cathedral will also have mosaics depicting partisans, as well as participants in the Great Patriotic War and the Battle of Borodino of 1812.

Dmitry Peskov, press secretary to the Russian president, told TASS that Putin had been informed of the mosaic.

"When he heard the report, he smiled and said: 'One day our grateful descendants will appreciate what we did, but it is too early to do this now,' TASS quoted the press secretary as saying.

In some Russian media these words were interpreted as an instruction to remove Putin’s portrait from the mosaic, but later Peskov clarified that Putin had not asked for his portrait to be removed from the church.

A member of the Patriarch’s Council on Culture, Leonid Kalinin, asserted that the artists did not want to remove Putin’s image from the mosaic, and anyway only Patriarch Kirill, leader of the Russian Orthodox Church, and the supreme commander-in-chief of the Russian Federation armed forces could issue such an order.

“The mother of one [of the artists - Russia Beyond] lives in Crimea, and the sister of another lives there with her husband and children. I can be instructed to do it, but I cannot in turn give such an order to the artists who have relatives there [in the Crimea - Russia Beyond],” Kalinin said.

According to Znak.com, the church cost 6 billion rubles ($80.4 million) to build. The height of the building, including its cross, will be 95 meters, making it the third tallest Orthodox Christian church in the world. The opening of the church is planned for May 9, 2020 to mark the 75th anniversary of Victory in the Great Patriotic War.