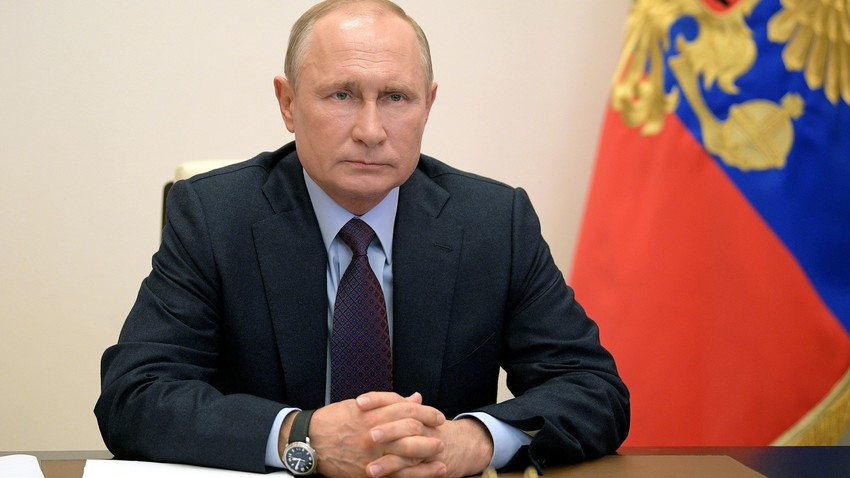 Russian President Vladimir Putin chairs a meeting on social and economic issues via a video link at the Novo-Ogaryovo state residence outside Moscow, Russia May 6, 2020. Sputnik/Alexei Druzhinin/Kremlin via REUTERS

Russian President Vladimir Putin has held another live broadcast with his ministers to discuss strategies for Russia’s gradual return to regular-functioning economic and public life.

During an earlier video call, the Russian leader set May 5 as the deadline for the formulation of new strategies for returning life to normal by May 12.

Although the country has managed to successfully maintain a long-distance implementation of crucial processes - submitting legal documents, taking school exams, filling out applications and so on - the government believes it’s time to get back to normality, and with that, Putin asked the head of the Ministry of Health, Anna Popova, to give her assessment on how such a process is to take place.

Popova outlined the following stages for a gradual return to normal life. She did not, however, name any concrete deadlines. Each Russian region will have the power to decide when to implement them taking into account three factors: infection rates, number of free places at hospitals and conducted COVID-19 tests.

Stage 1: Sports and related outdoor activities will be allowed; and smaller non-grocery stores can re-open [grocery stores have been working throughout the self-isolation regime].

Stage 2: An official relaxation in the regulations for taking walks (taking into consideration existing norms of social distancing); other businesses, including larger stores can re-open for special hours; educational institutions will also be allowed to re-open (schools, colleges, etc.).

Stage 3: Public parks, squares and other public places will officially be reopened and can be visited without the need for special permission to be outside - but again, bearing in mind social distancing measures. At this stage, all other stores, hotels and cafes will also be allowed to re-open.

Popova emphasized that each of these steps can be reversed or augmented, if Russians are seen to be throwing caution to the wind, which could lead to another potential spike in cases - a position that Putin and everyone else shared.

With over 68 Russian regions taking care to observe regulations on the use of respirators, Popova believes the country is seeing direct positive effects.

Moscow mayor Sergey Sobyanin spoke after Popova to add that, by May 12, Moscow will also begin opening up construction sites and factories, allowing some 500,000 Muscovites to return to gainful employment. However, the self-isolation regime in Moscow will remain in effect. He stressed that the increasing infection rates in Moscow are tied to the increase in tests and not to the spread of the disease itself.

As always, the economy remains one of the top considerations when making these decisions, the president stressed, adding, “Practice shows that we have taken the correct course of action. Moreover, we are seeing other countries following in our footsteps.”