The evolution of Russia's No. 1 news program - from the USSR to now 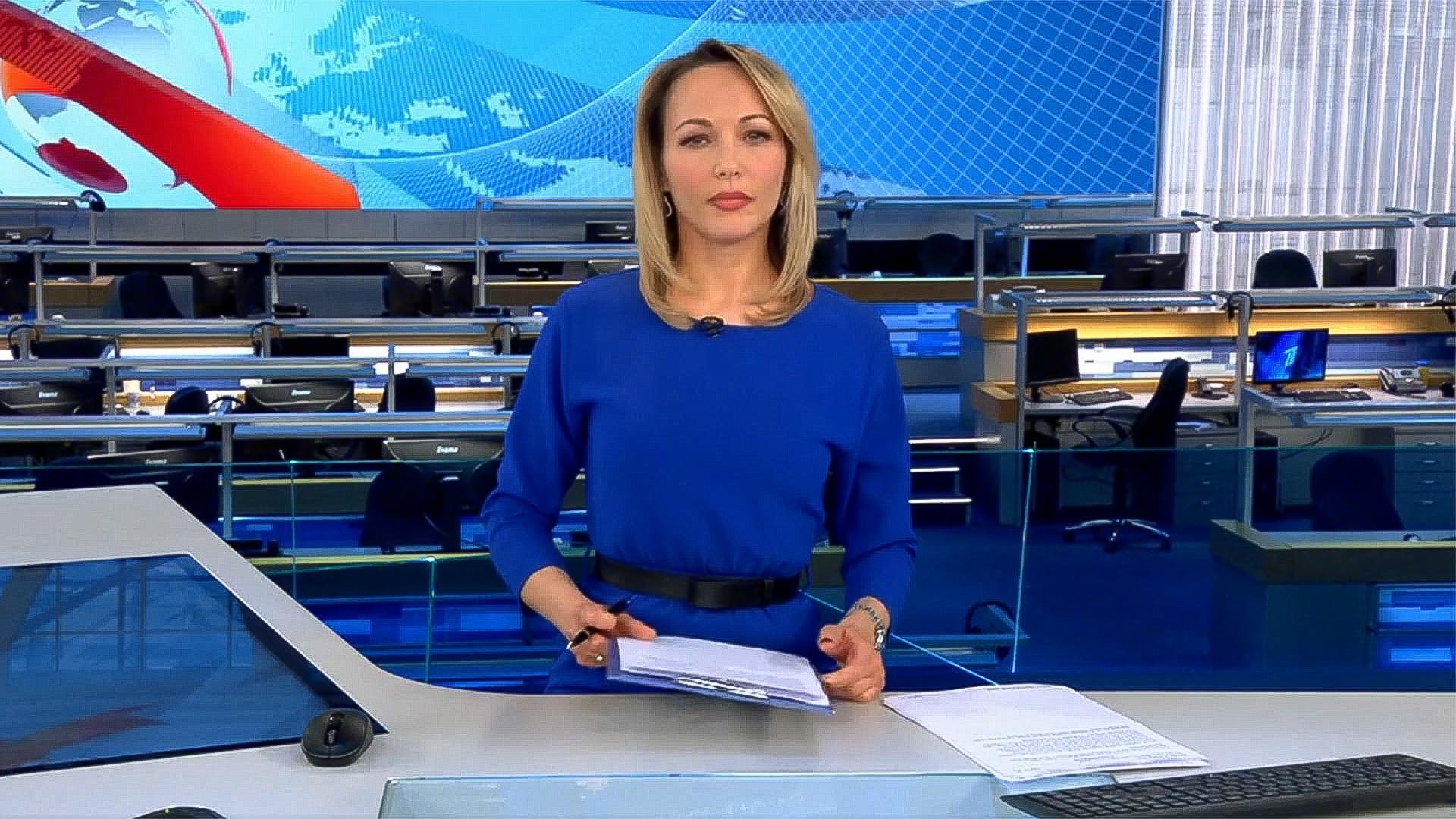 Pervy Kanal (Channel One)
‘Vremya’ is the oldest news program on modern Russian TV. Read on to find out how it has managed to stay relevant since the days of the Soviet Union.

The evolution of the ‘Tsentralnoe Televidenie’, created by the USSR’s ‘Gosteleradio’ (State Committee on television and radio broadcasting), was remarkably fast, despite the low-developed technology, and by the end of the 1960s, it had set up in four channels. But there still was a problem with presenting news. Soviet TV only offered its viewers short news blocks. There also was a weekly information program called ‘Estafeta novostey’ (“The relay race of news”) which slowly kept losing its popularity. 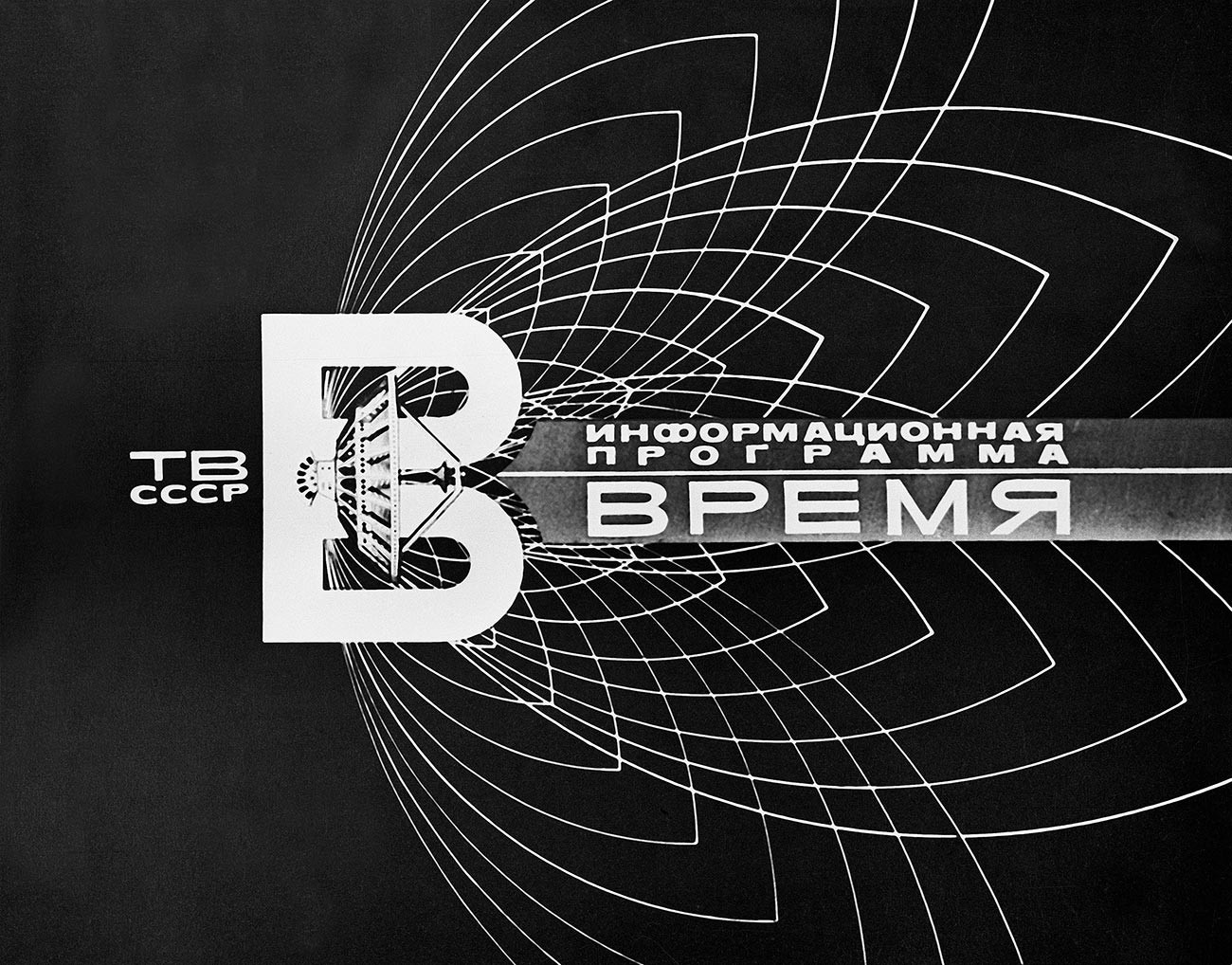 However, the end of 1967 changed everything. Four Gosteleradio workers (Alexey Petrochenko, the director in chief, Irana Kazakova, an observer and two editors – Leonid Zolotarevskiy and Levan Dzaridze) held a meeting at the ‘Shabolovskiy’ TV center (Moscow, Shabolovka Street) to create a brand new full-scale information TV program to replace the short news blocks. They worked out a new format and name, which wasn’t too easy. Leonid Zolotarevskiy remembered: “Tens of variants, each one worse than the other, flashed by like shots, when suddenly, Petrovich [Alexey Petrochenko] blurted out: ‘Vremya!’ [Time!]”. And Gosteleradio accepted it.

‘Vremya’ went on air for the first time on January 1, 1968. Henceforth, this date was celebrated as the birthday of the program. Initially, it only consisted of an announcer reading live reports, coming one after another. A composition by Georgiy Sviridov called ‘Vremya, vpered!’ (“Time, forward!”) was chosen to be the opening theme. The famous composer actually wrote it for a movie of the same name by director Mikhail Schweitzer, but the viewers started to associate the suite with ‘Vremya’ very quickly. 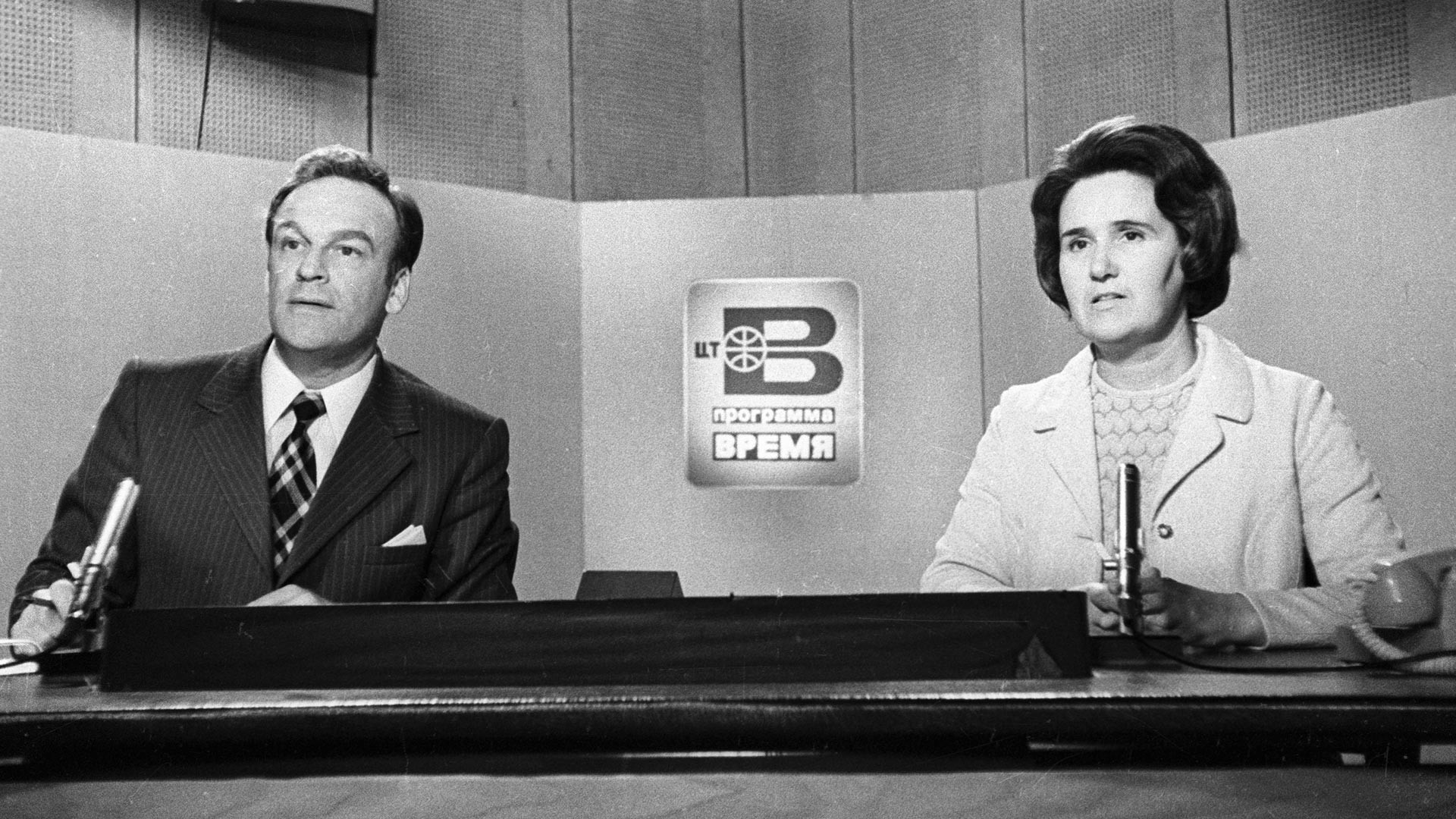 The beginning of the 1970s transformed the news program. All the production moved to the ‘Ostankino’ TV-center (Moscow, Akademika Korolyova Street). At the time, Yuriy Letunov, who was the founder of the radio station ‘Mayak’ (“Lighthouse”), became the program’s editor-in-chief and decided to improve its format. From then on, two announcers, a man and a woman, hosted the program and took turns reading each news item. The announcers also changed through time with, for example, Igor Kirillov, Viktor Kochergin, Evgeniy Balashov, Anna Shatilova, Nonna Bodrova, Galina Zimenkova and others assuming the role. ‘Vremya’ provided a look at politics, the economy, culture, sports, as well as some selected events of foreign life. From 1971, it also included a weather forecast, and in 1972, it was confirmed that ‘Vremya’ must be on air at 9 p.m. Before that, there was no fixed time slot for the program in the schedule. The only exceptions for a schedule change thereafter were made to accomodate the fireworks on May 9 and some sports events. Additionally, the number of broadcasts was increased from three to five times a week. 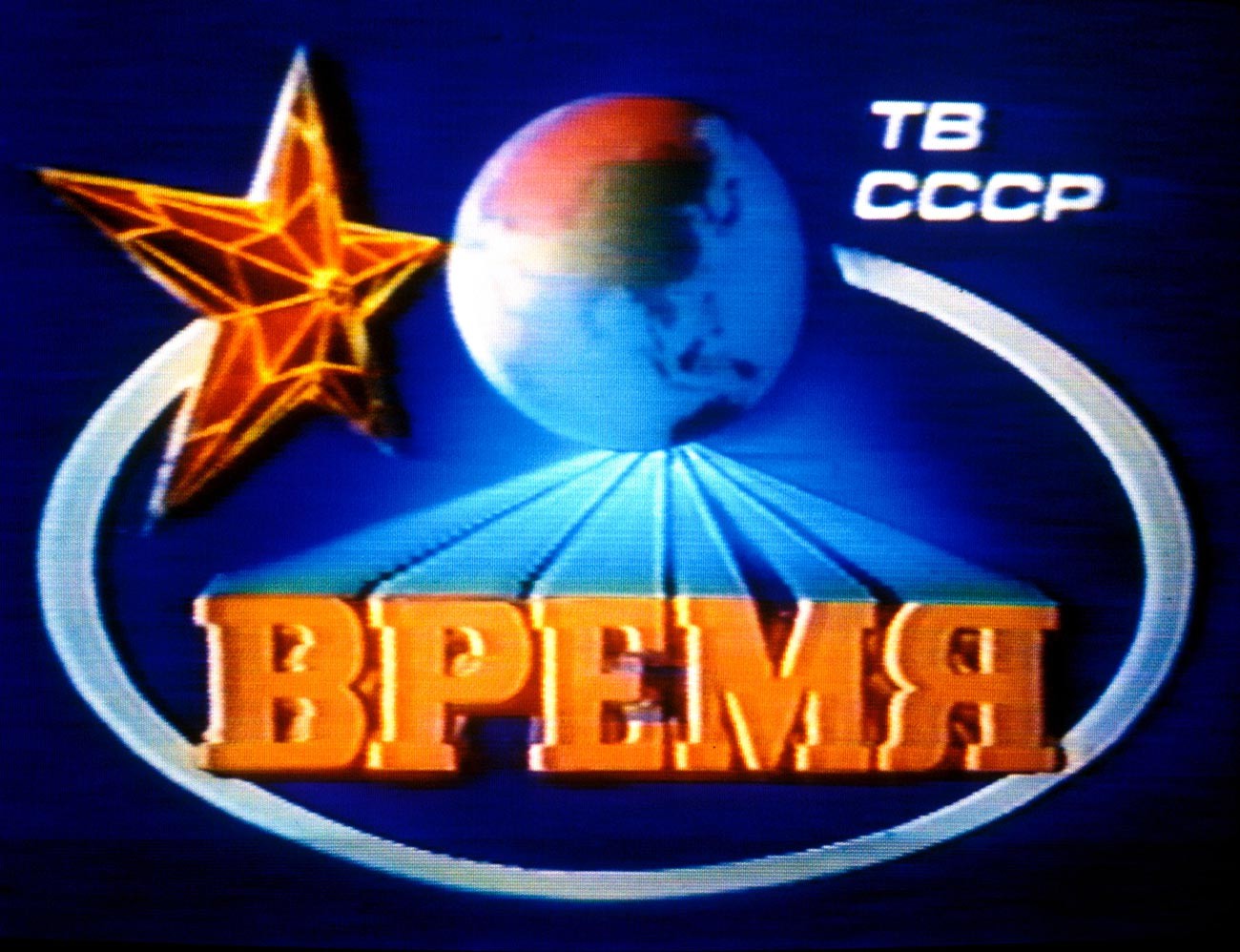 Of course, being a TV-program of Gosteleradio, ‘Vremya’ had to be a means of Soviet propaganda, so the information offered in the show was one-sided and official. Moreover, editor-in-chief Yuriy Letunov loved the USSR very much and always wished to show the best side of his country and chronicle all its achievements. Meanwhile, as the popularity of the program was growing, ‘Vremya’ began to be broadcast several times a day, ending up with ten programs a day to be broadcast everywhere in the USSR and other socialist countries. It was even repeated the following morning from 1978 to 1987. In 1977, the staff of the program was awarded the USSR State Prize for their remarkable work. 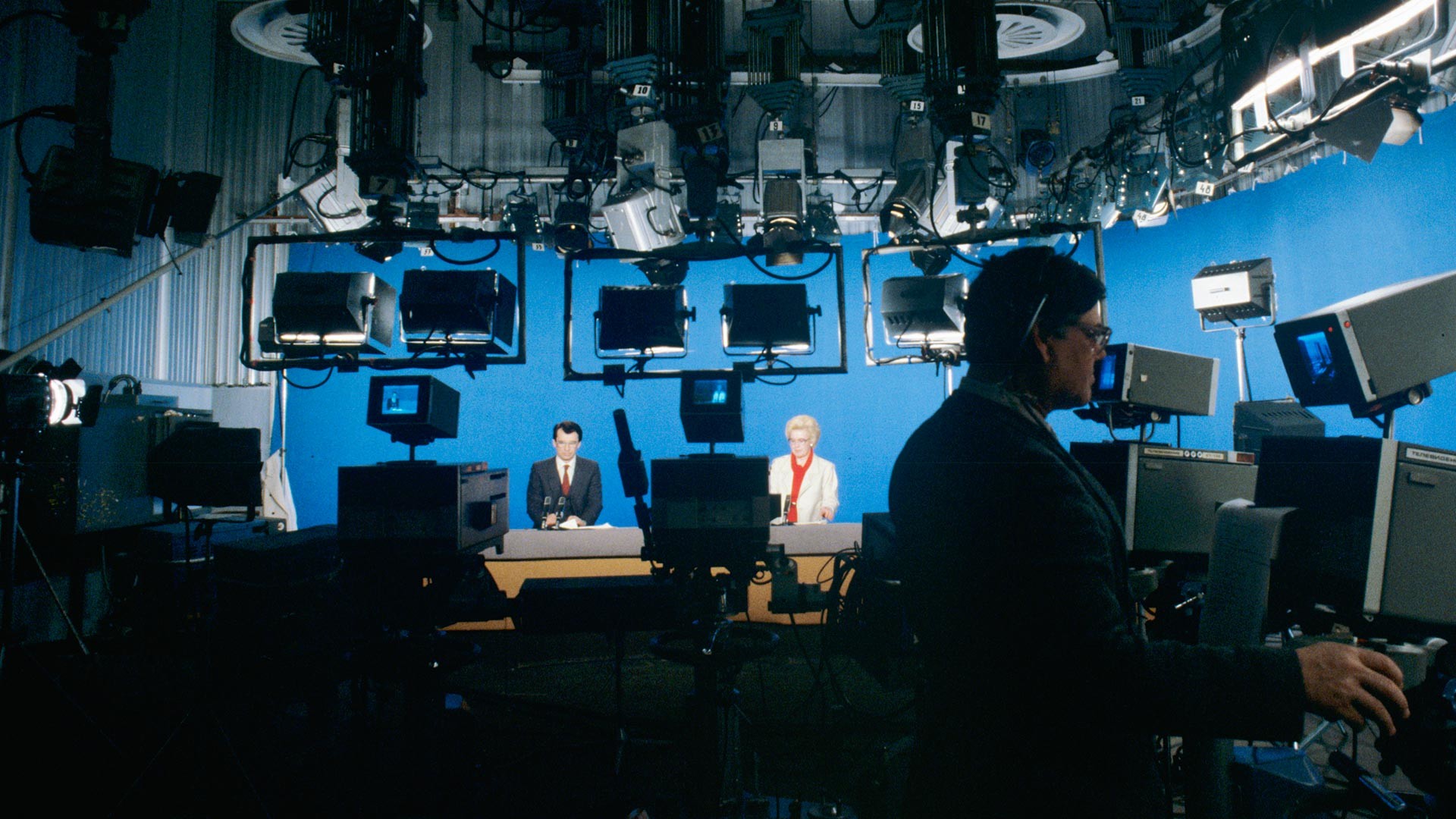 The 1980s saw journalists brought into new releases of ‘Vremya’. The announcers would turn to them for a political review or a comment. Many famous journalists took part – for example, Genrikh Borovik and Spartak Beglov. The program started to broadcast on two channels after the second one became available across the Soviet Union. However, it was also the period when the composition ‘Vremya, vpered!’ fell into disgrace for several years and was dropped.

The Soviet Army began its campaign in the Afghan War, and the composition was considered to be alarming and reminiscent of a war declaration. Happily, the musical symbol of ‘Vremya’ was later brought back. But the directors kept cutting it for time economy, so Sviridov wrote in his memoirs: “Finally, there [only] remained a pitiful bit.” At the end of the decade, the journalists of ‘Vremya’ were working from 40 reporter bureaus around the world. While on the ‘Second’ channel, broadcasting began to be supported by sign language. 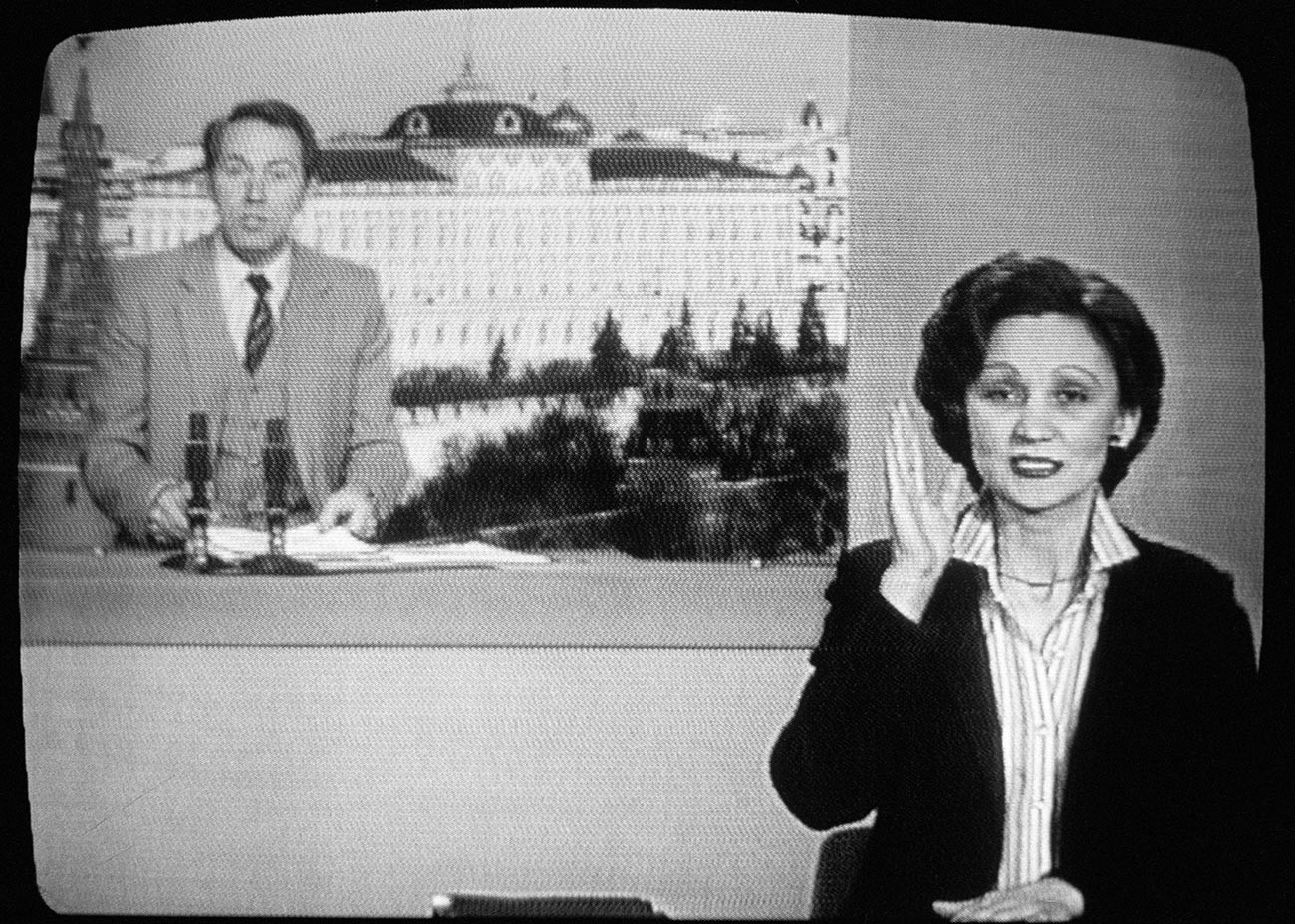 In 1991, announcers were removed from the studio and replaced by broadcast journalists. ‘Vremya’ was presented by renowned ones like Sergey Dorenko, Zhanna Agalakova, Arina Sharapova, Dmitriy Kiselyov, Kirill Kleymyonov and many others. At the same time, during the August Coup, the program went through an ideological split among the staff, that often led to contradictory messages in the program. The first half of the 1990s was a difficult time for ‘Vremya’, because it had practically lost its identity for several years.

After the August Coup, it changed its name to ‘TV Inform’, and a few months later – to ‘Novosti Ostankino’ (“Ostankino News”) and in July 1992 – to ‘ITA Novosti’ (“ITA News”). The original name was only brought back on December 16, 1994. That day, presenter Tatyana Komarova spoke to her viewers: “‘Vremya’ is the name that mirrors the essence of our work. The show reflects the era. We are the mirror of our time.” 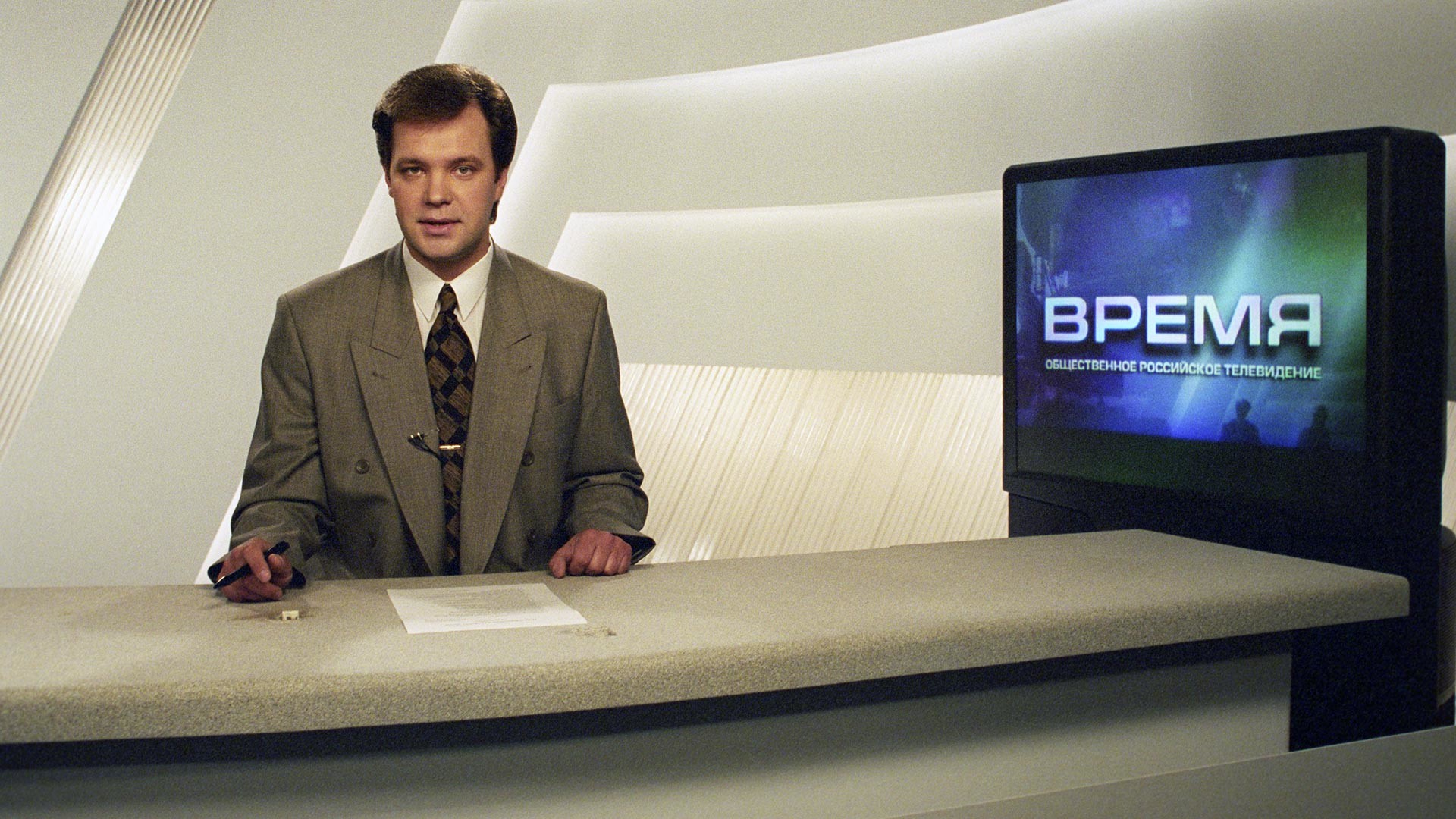 As Gosteleradio was no more, ‘Vremya’ had now become part of ‘ORT’ (Public Russian Television). Since 1994, the format has been kept the same. The news show has a supplement called ‘Voskresnoe vremya’ (“Sunday time”) that was introduced in 2003, where everything that happened during the week is summed up and analyzed. It has been presented by the likes of Irada Zeynalova, Pyotr Tolstoy, Pyotr Marchenko and Andrey Baturin. 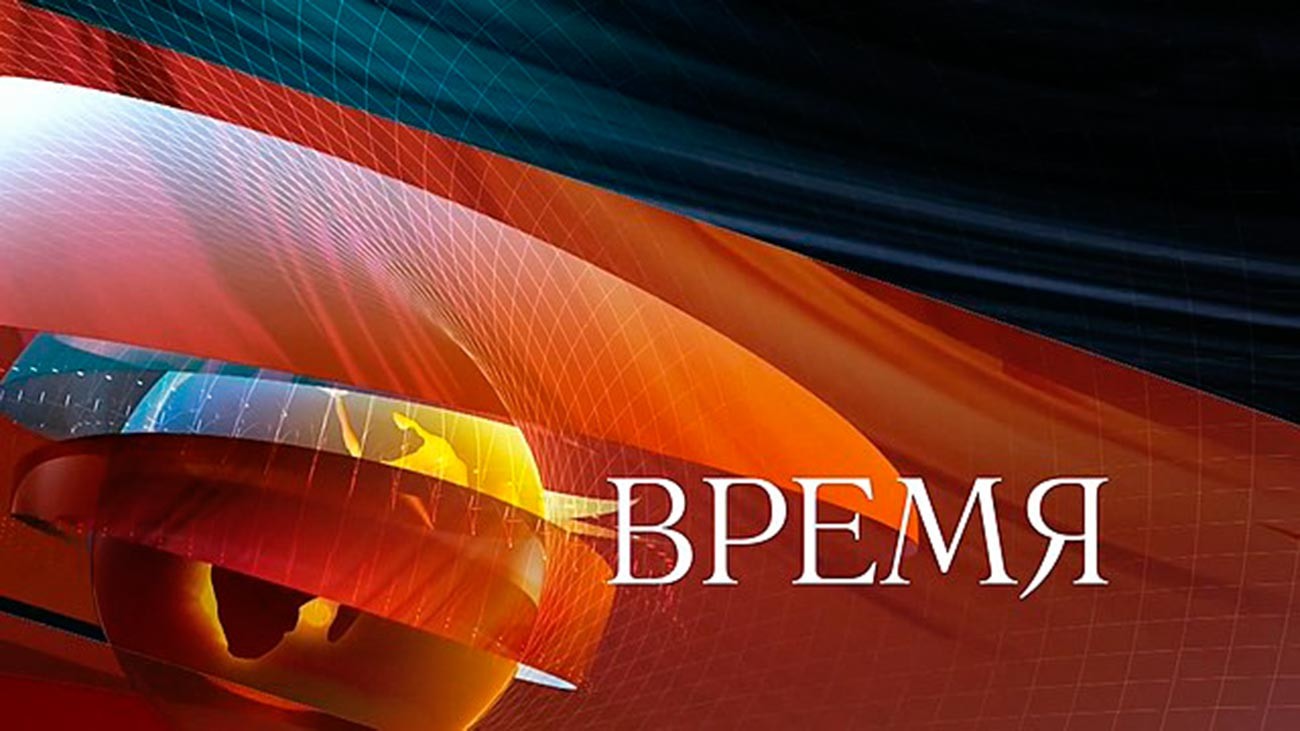 Whatever is happening in the country or worldwide, ‘Vremya’ never stands idly by. In any situation, from conflicts in the Republic of Chechnya to the 2014 Winter Olympic Games in Sochi,  its reporters have always done their best to tell millions of viewers what is going on. Today, we can see three experienced broadcast journalists in the studio as presenters: Ekaterina Andreeva, Kirill Kleymyonov and Vitaliy Eliseev. And ‘Vremya, vpered!’ is still the main opening theme. The program has meanwhile received the annual TEFI Russian television award four times: in 2002, 2006, 2007 and, most recently, in 2017. 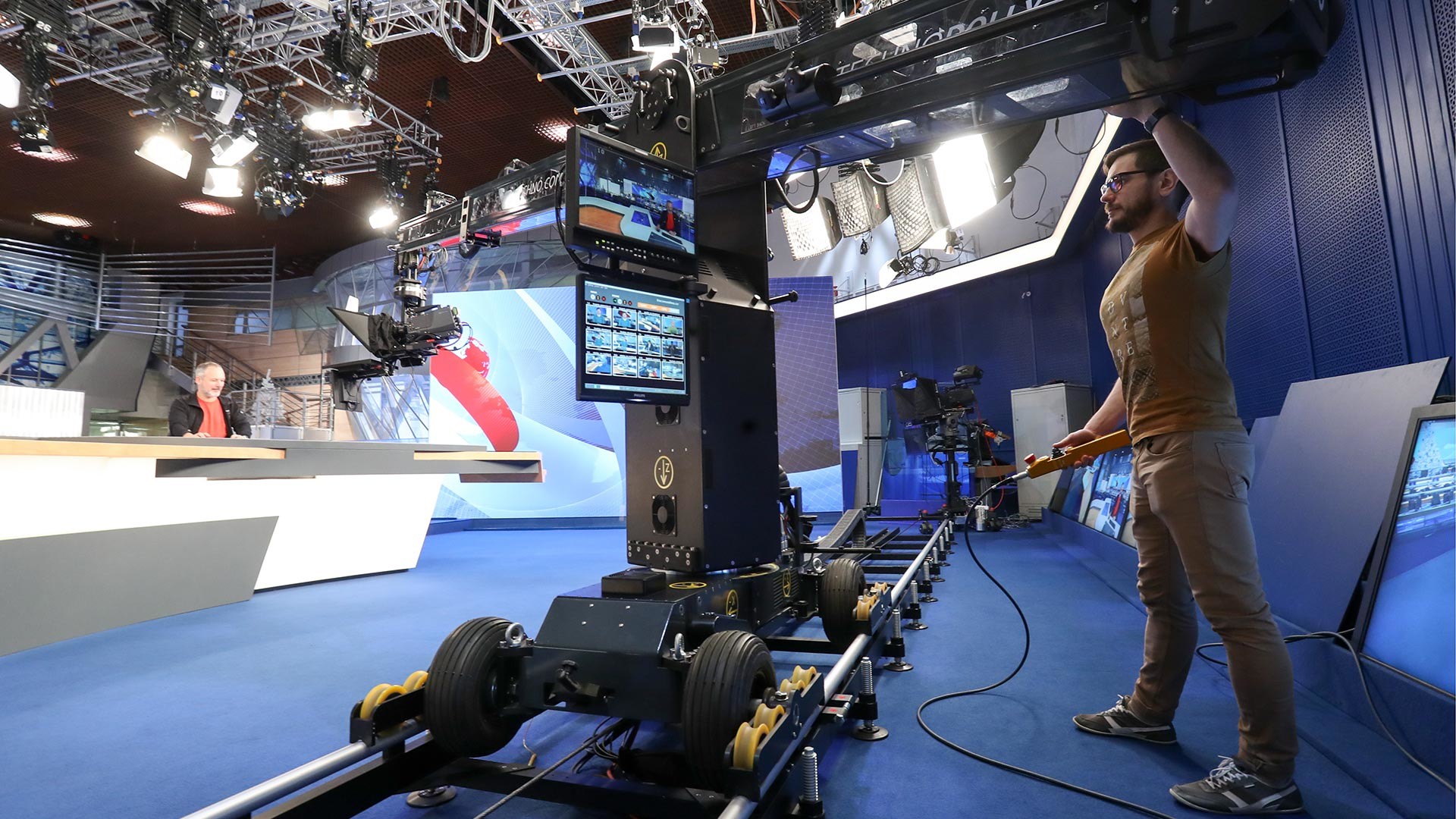