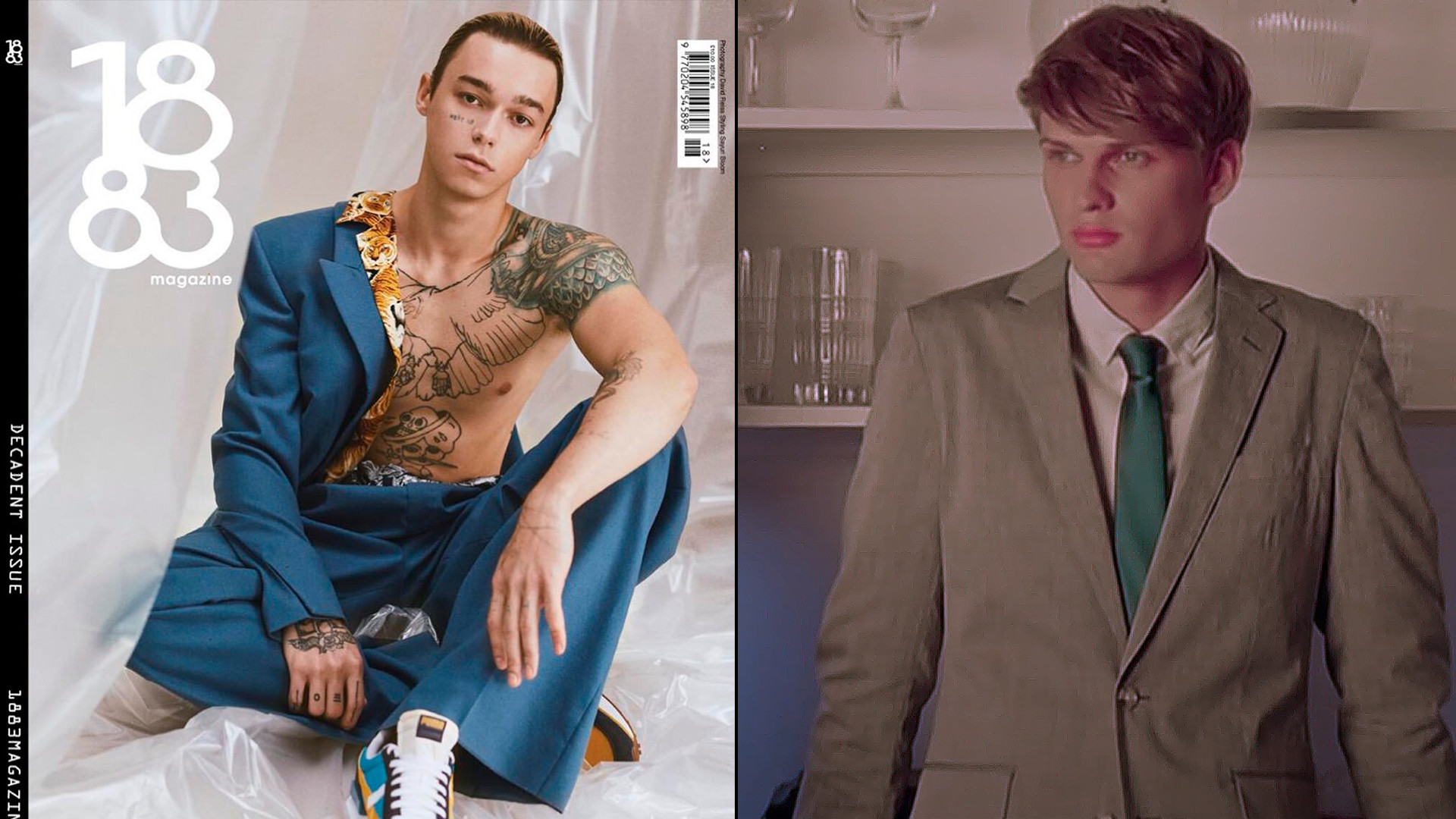 https://www.youtube.com/watch?v=VY1eFxgRR-k; @sashadidntwakeup
Some worked as sellers and handymen before being talent-spotted. Now they grace top fashion shows and star in music videos.

The Dulatov family — mother, father and five children — emigrated from Chechnya to Dusseldorf, Germany. At the age of 16, the eldest son Jabrail got a job in a local supermarket to save up money for a Gucci belt, which he'd seen in a shop window. One day, a scout noticed him working in the supermarket, and offered him a different kind of job. At first, Jabrail flatly refused because of his Muslim faith and Chechen upbringing, but the agent persuaded him to attend a casting with his father.

Inundated with offers from fashion houses, Jabrail took part in shows by Alexander McQueen, Lanvin and Gucci. His brothers, Sulumbek, Tamerlane and Islam, also became interested in a catwalk career, and now all four siblings work as models. One of the brothers, Islam, signed a contract with Versace.

Despite their profession, the brothers observe their Chechen culture. For example, Jabrail refused an advertising contract with Armani worth $140,000 because it involved modeling underwear.

Outside of fashion, the brothers dream of becoming MMA fighters and opening a free gym for Chechens in Dusseldorf. The eldest sibling Jabrail has since cut down on photo shoots, and hopes that his brothers’ modeling careers are a temporary phenomenon. 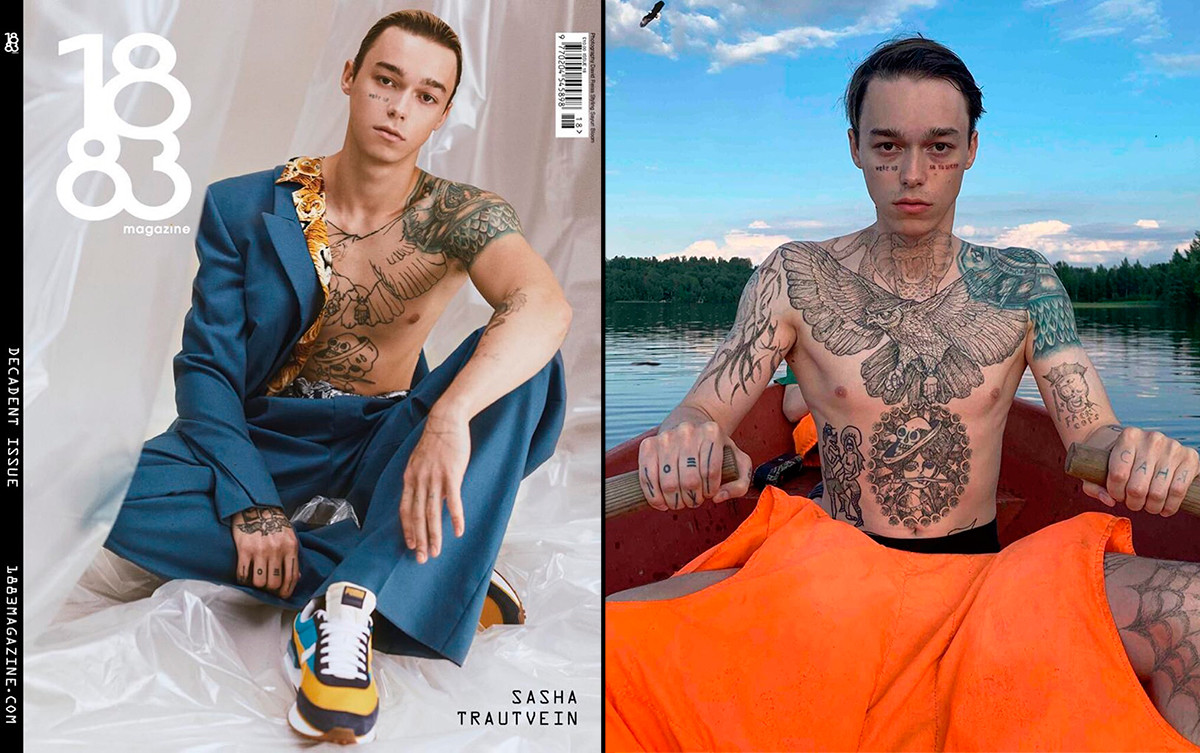 In 2016, the 17-year-old Sasha (now 21) from the Siberian industrial city of Kansk (4,300 km from Moscow) had a meltdown, dropped out of school, got himself a “Wake Up” facial tattoo, sold his smashed-up car, bought a backpack, and followed his girlfriend to St Petersburg. The relationship didn’t work out, and he was flat broke. To make ends meet in the unfamiliar city, Sasha worked off and on as a laborer on a building site and a security guard, all the while keeping an Instagram account. There he posted pictures of St Petersburg communal apartments and himself in old sweaters and stripy pants.

A Ukrainian hip-hop artist he met online saw potential in Sasha, and advised him to try his hand (and face) in the modeling business. 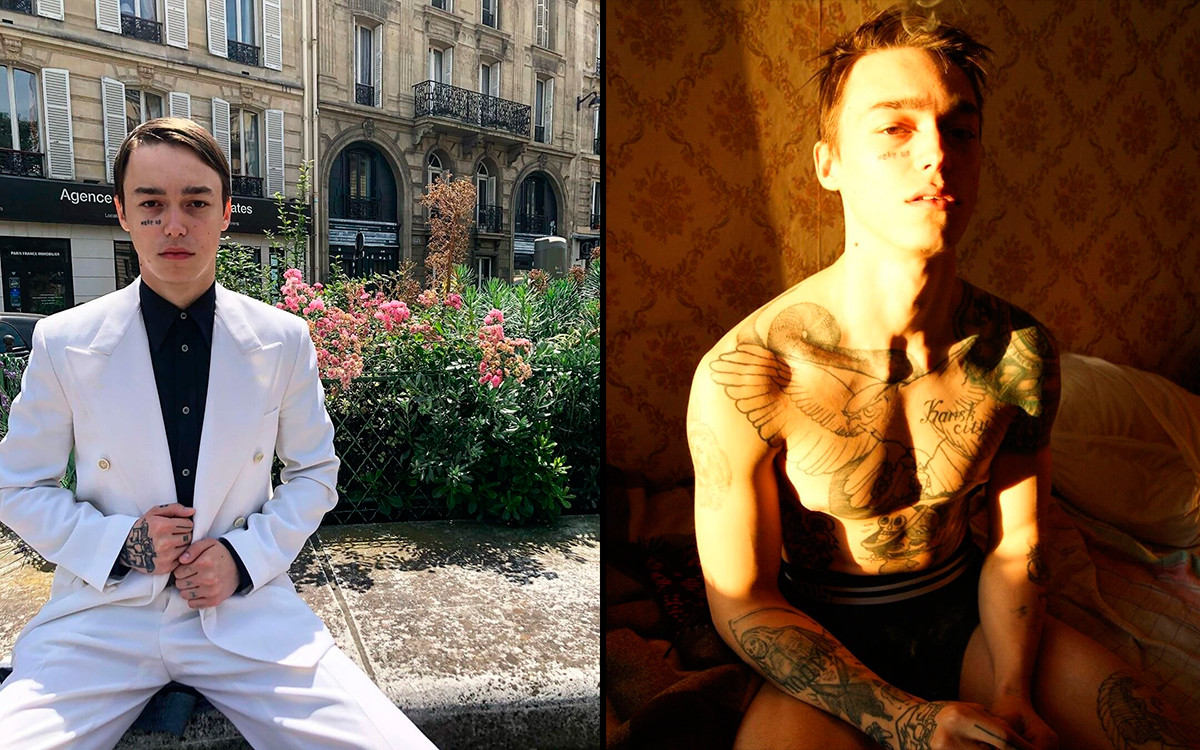 His unusual appearance and down-at-heel Instagram pics appealed to famous brands. Trautvein was invited to shoots and shows for Heron Preston, Y-3, Louis Vuitton, Dior and others, and he also became the face of Moncler. In the summer of 2019, he launched a series of brightly knitted, “Wake Up”-embroidered balaclavas — one of which caught the eye of Billie Eilish.

Esquire included Trautvein in its Top 10 most stylish young people on the planet, and in the spring of 2020 Sasha placed third in Dazed & Confused magazine’s rating of “people making history right now.”

Between shows and shoots, Sasha continues to live in St Petersburg, where he writes rap songs, but dreams of flying to the US and UK to make a documentary about his life.

A student of veterinary science in Kazan, Alexander entered the modeling business thanks to Russian social network Vkontakte, where his photos were spotted by Tanya Azarova, founder of St Petersburg modeling agency Tann Model Management, who invited him to Russia's northern capital.

Soon, Gordeev was taking part in shows for Marcelo Burlon, Salvatore Ferragamo, Kenzo and Yohji Yamamoto. In 2018, he became the face of Vivienne Westwood, and appeared in campaigns for Palomo Spain and Harley-Davidson.

Besides work, Gordeev draws — in February 2020, his own personal exhibition was held in the Moscow gallery betweenwindows.

“Since childhood, I wanted to draw, but couldn't. When I started working as a model in Europe and Asia, I abandoned the conservative environment of Kazan and discovered modern art. In my view, its most vital aspect is the lack of a clear definition of what constitutes art in general,” believes Gordeev.

This 26-year-old top model and on-screen heartthrob of Selena Gomez was born in 1993 in the town of Ostrovtsy in Moscow Region into a family of accountants. Later, his family moved to Moscow proper, and at 17 Andrey decided to try out as a model. Kupchenko quickly found a mother agency and attended London Fashion Week, after which he was invited to shoots and shows for Gucci, Kenzo, Dries Van Noten, Pradа, Dior Homme and other brands.

Andrey became world-famous after appearing with Selena Gomez in the video for the song “Back To You”.

“They just gave me a paper airplane and told me to look at it as if I didn't care what was going on. And they asked me to turn the steering wheel and talk to an imaginary girl. That was the whole audition,” recalls Kupchenko.

On the evening that same day, he was picked for the role of Selena Gomez’s boyfriend.

“It’s been one of the most biggest days in my life” wrote the model on Instagram, with a double superlative.

In his free time, Kupchenko is fond of soccer, hockey and reading — his favorite books are Detective by Arthur Hailey and An American Tragedy by Theodore Dreiser.

This globe-trotting 36-year-old fashion model was born in the Siberian city of Mezhdurechensk (3,800 km from Moscow). When Arthur was 13, his family decided to move to the US. There, in Brooklyn, he played soccer, got a bachelor’s degree in business management from St Francis College, and seriously considered a sports career.

During a training session, he was noticed by an agent who immediately offered him a job. Arthur reluctantly agreed in order to “stop sponging off his parents and earn some money.”

In 2006, he signed his first major modeling contract with Tommy Hilfiger, followed by collaborations with John Galliano, Dolce & Gabbana, Giorgio Armani, Louis Vuitton and other brands.

In 2013 Forbes ranked Kulkov as the fourth highest-paid male model in the world, and in 2015 Models.com described him as a “modeling industry icon.”

In a 2015 interview with Hello, Arthur stated his intention to leave the modeling business and open his own bar. There has since been no news of any bar in the model’s Instagram account, and Kulkov himself continues to do shoots for major magazines and lookbooks.