Meet one of the most dangerous plants in Russia 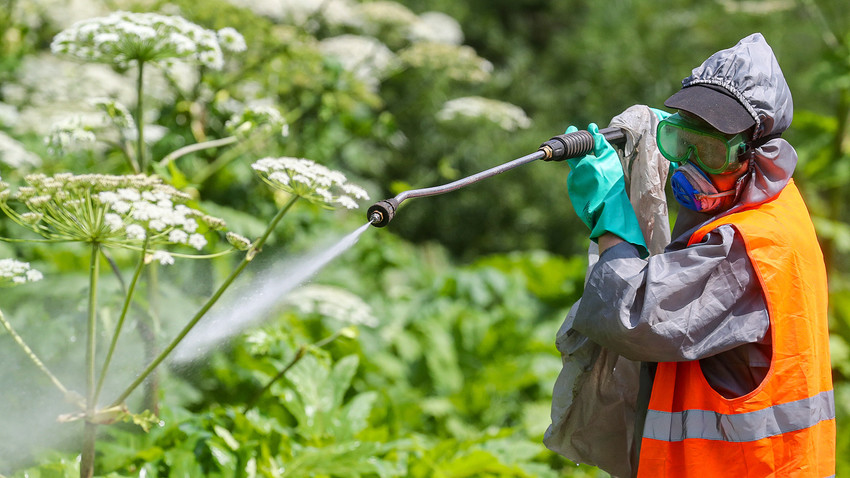 A person in a protective suit kills weed in Moscow Region.

Sergei Savostyanov/TASS
Sosnowsky's hogweed might look peaceful and harmless at first glance, but don’t be deceived by its dill-like appearance. The only thing this demon plant really wants is to make you cry from pain and maybe even kill you.

Every summer Russians put on special protective suits, gather their sharpest spades and rise up against Sosnowsky's hogweed (Latin name - Heracleum). This weed, which looks like a huge dill plant, can be deadly and grows literally everywhere from roadsides to private gardens. Why is it so dangerous?

How the Sosnowsky's hogweed appeared in Russia 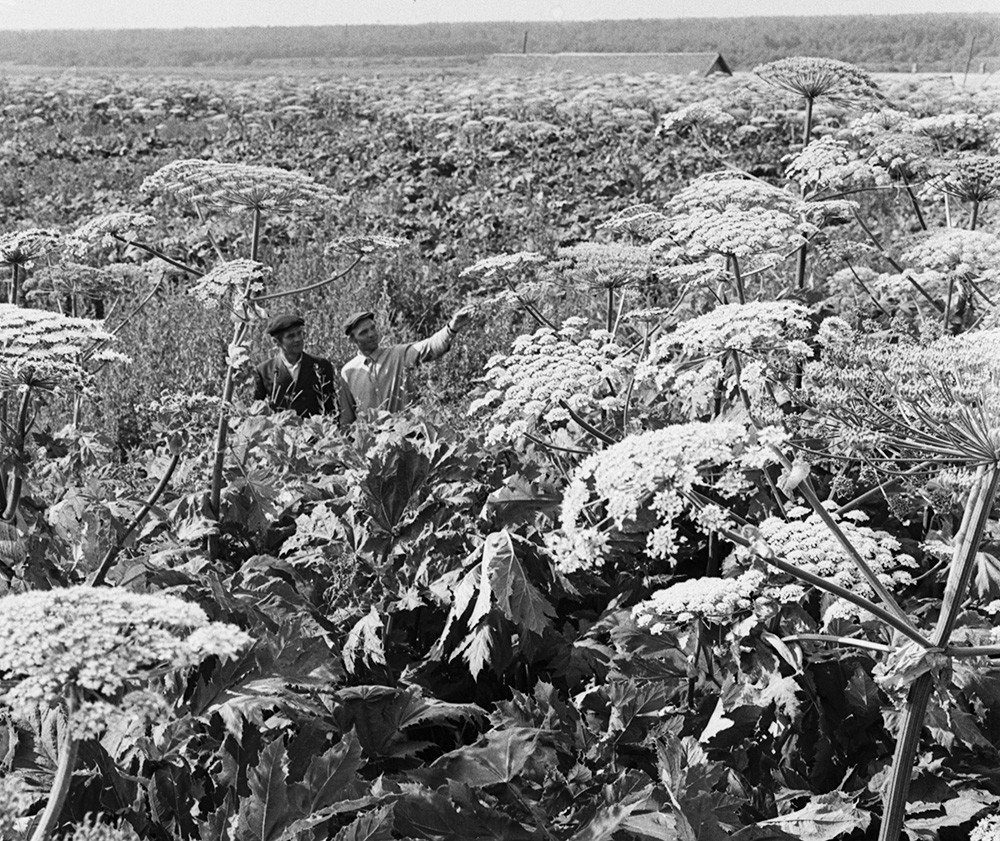 The story of hogweed began in the difficult years following World War II when the Soviet Union needed to revive its agricultural production. The collective farm leadership faced a problem of how to feed animals and was looking for a cheap forage crop. Agronomists drew attention to hogweed, which originally grew in the cold mountainous regions of Turkey and Georgia. The plant had never grown beyond these areas until, as an experiment in the 1950s, they tried raising it in Kabardino-Balkaria. The results were incredible, and it turned out that the plant reproduces at a breakneck speed and grows to a truly gigantic size—up to four meters. The botanist Ida Mandenova discovered the species and named it in honor of her teacher Dmitry Sosnowsky.

For several years, scientists experimented with Sosnowsky's hogweed in various scientific institutes in Leningrad, Moscow, Karelia and Ukraine. It took root perfectly, was specially grown as a silage crop and was even displayed in botanical gardens as an ornamental plant.

At the same time, Norway was carrying out experiments with another species of hogweed but came to the conclusion that milk from cows that eat it becomes tasteless, and mutations show up in their offspring. Additionally, its stem juice causes dermatitis. As a result, its use in northern Europe was abandoned. But in the USSR and other socialist countries, this weed was actively raised until the 1980s, by which time it was virtually everywhere. 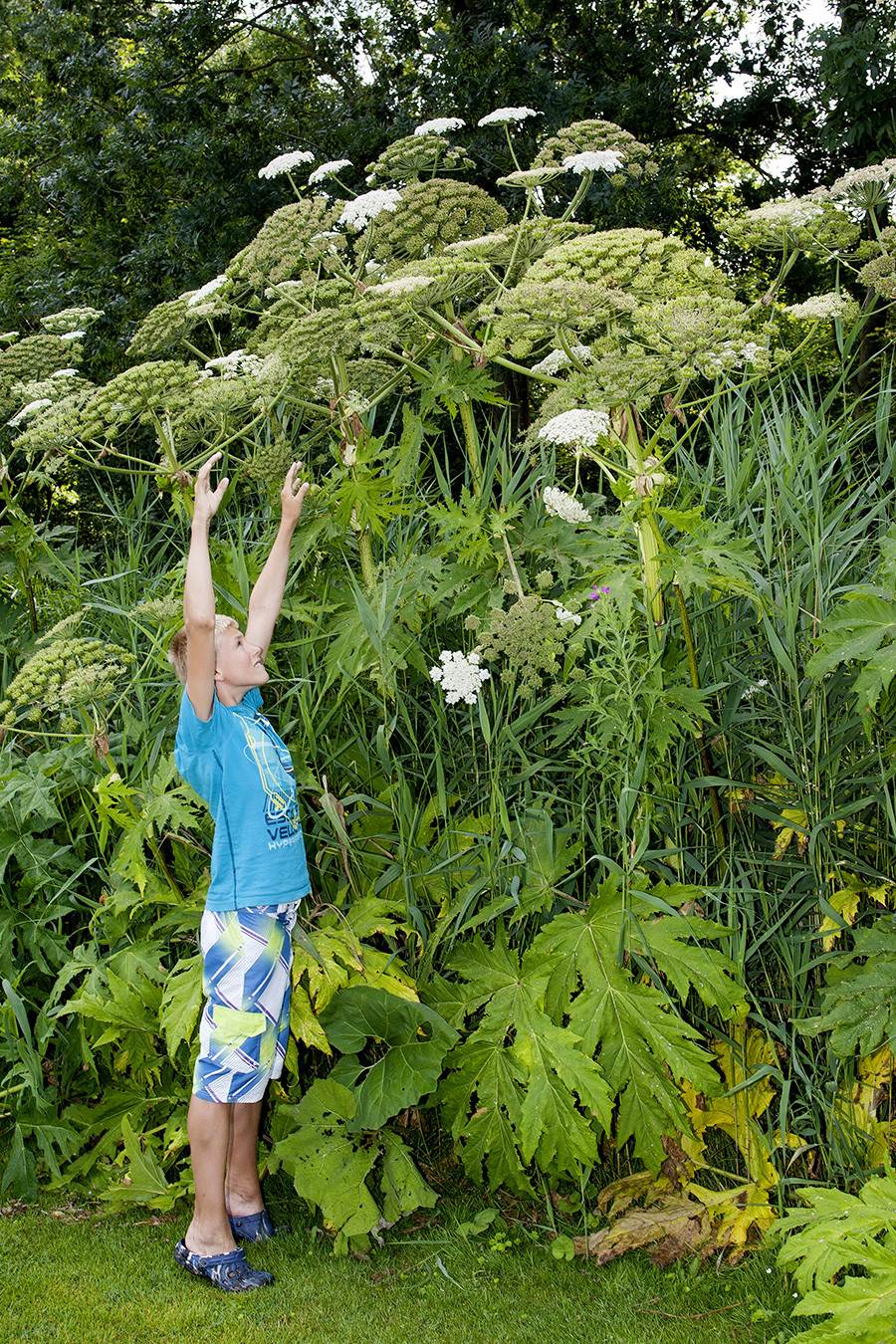 Around 70 species of hogweed are known in the world. They are, of course, similar to each other, but some variations are more or less poisonous. Some that can even be eaten. Interestingly, its Russian name - borschevik - is very similar to the word "borsch," and perhaps it even got this name because it was possible to make food from this particular peaceful species.

But unless you have a botanical science degree, it is probably best to never even go near any of these plants. Sosnovsky's hogweed is very dangerous, and it is also the species that is most widespread in Russia. 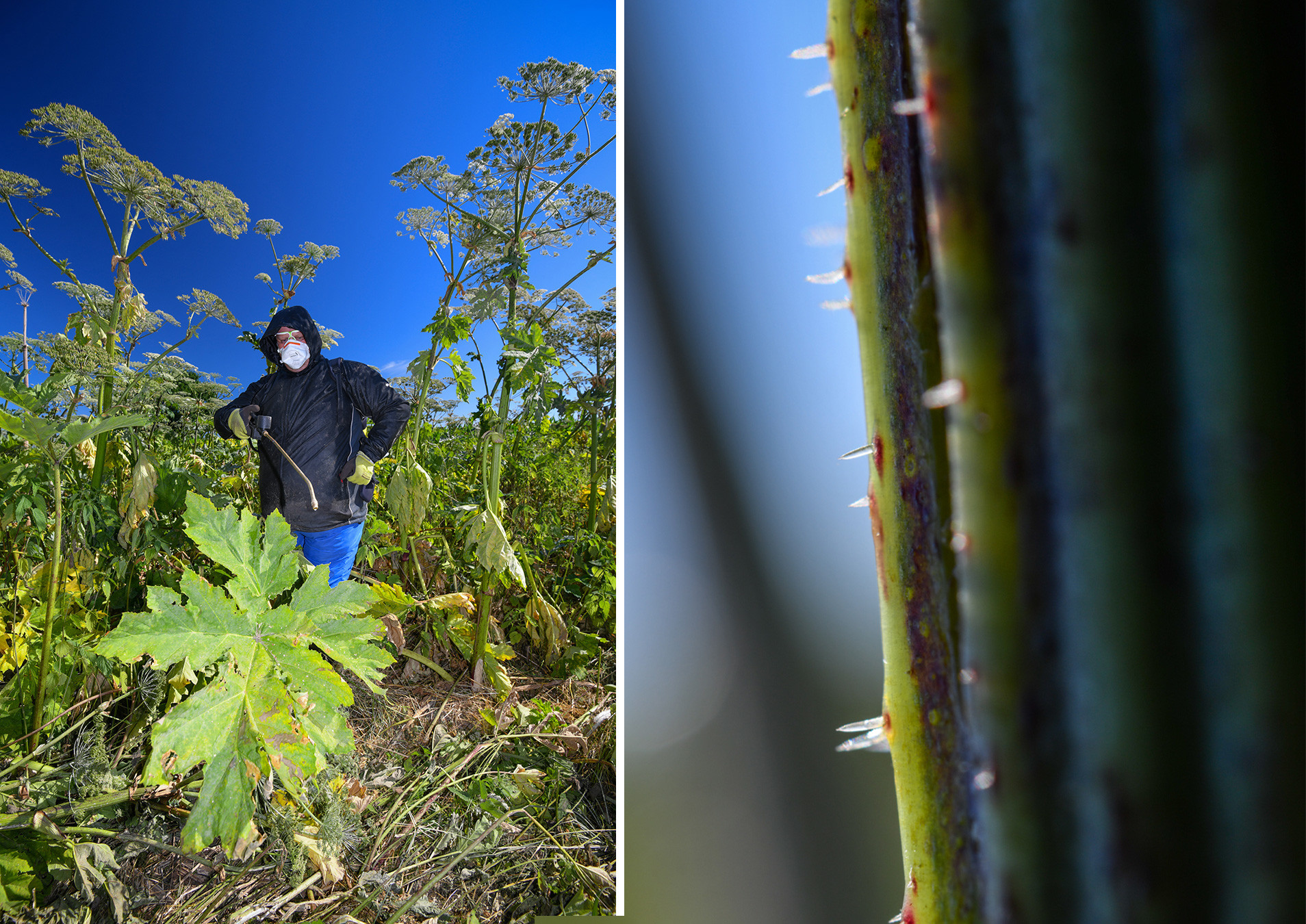 One of the main active substances in Sosnovsky's hogweed is furocoumarin, which protects the plant from insects and wild animals but is also very poisonous to humans. If you touch the hogweed’s stalk or, even worse, its juice gets on you then burns will appear on your skin even in the mildest case. The burned tissue will be extremely sensitive to sunlight, and the wounds will take a very long time to heal. And even after they have disappeared completely, they can reappear again if exposed to the sun. If you do accidentally touch the stalk, try to gently wash the juice off with water and soap. And see a doctor right away. Burns that cover 80 percent of the body can even be fatal.

How to fight this weed 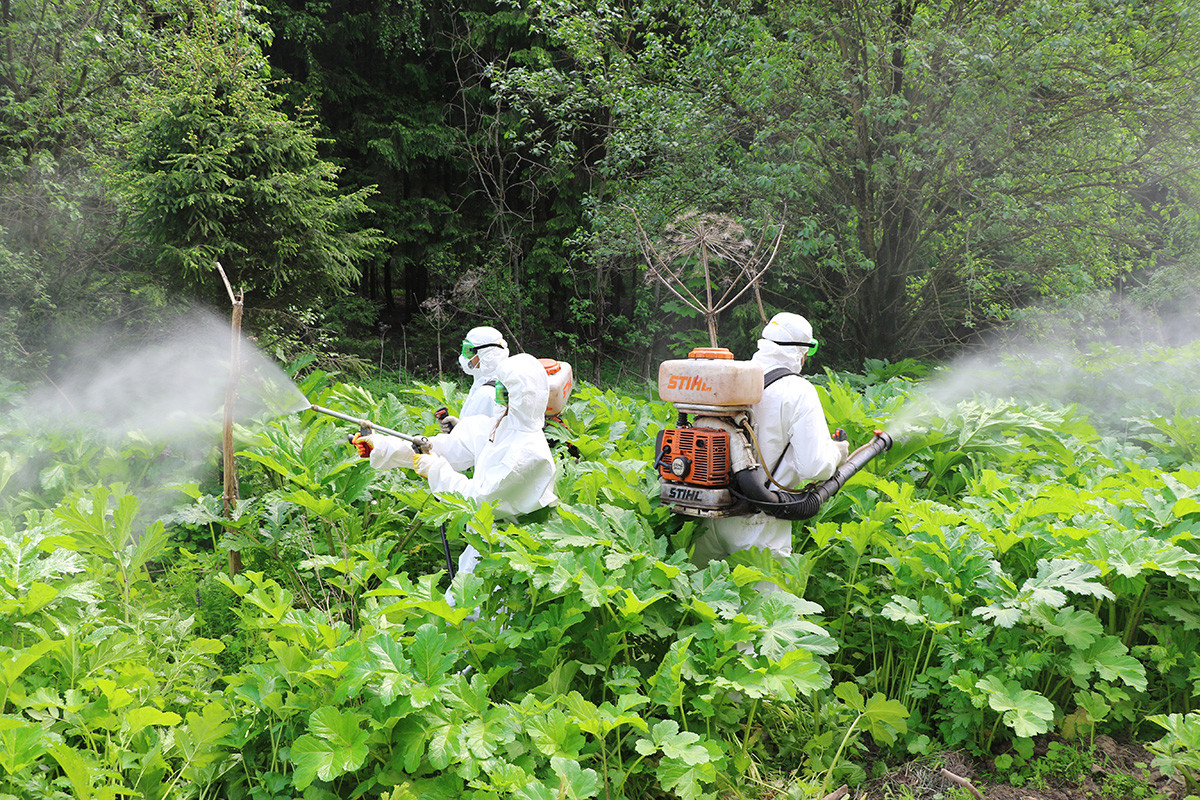 Sosnowsky's hogweed in the Moscow Region.

Hogweed’s superpower lies in its ability to reproduce so quickly. It begins to grow in late spring, then inflorescences appear in summer and bloom until October. The wind easily moves its seeds over long distances, and after a couple of years they germinate, aggressively and uncontrollably colonizing new territories. And where hogweed grows nothing else grows.

This is why Russians fight it with a variety of methods, from mechanically digging out its roots to using pesticides. If a plant has just begun to grow, it is usually dug up by the root and burned. Inflorescences must be covered with a plastic bag or something similar so that they do not fly away, and then they should be burned. In the most extreme cases, when there are a lot of plants, people use herbicides (and then of course burn the plants afterwards). Scientists have calculated that it takes five years to eradicate hogweed from an area since its seeds still remain in the soil.

Since 2018, the Moscow region has introduced fines for having uncontrolled hogweed on your property. These go up to 5,000 rubles (about $70) for individuals when the plants are in the country, and up to a million rubles (about $14,000) for businesses with it growing on their premises.