FACT CHECK: Did a SNAKE crawl into a sleeping woman’s mouth in Russia? (VIDEO) 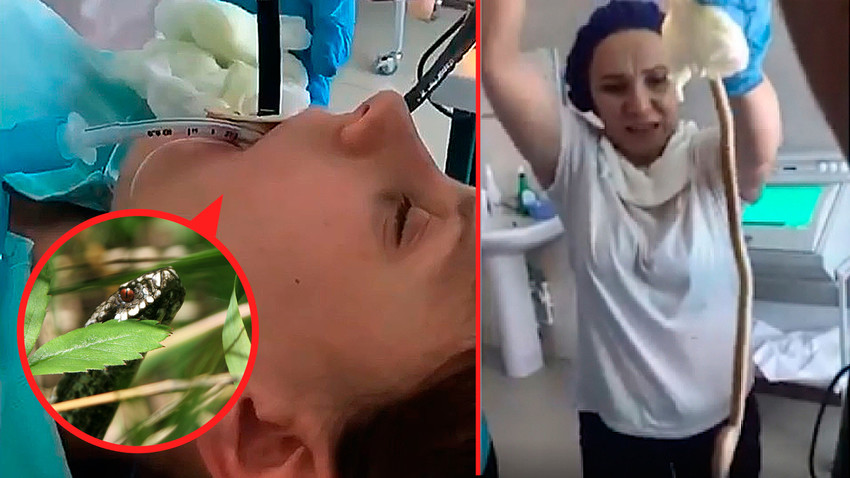 When a Russian woman from a village in Dagestan, Russia, had fallen asleep in her backyard, a snake crawling right into her mouth and stomach was the nightmare she least expected to see.

Yet this is apparently what happened: Her mouth fell open while she was sleeping and a passing snake must have confused it with a comfortable new hideout and crawled right into the woman.

The woman was sedated and taken to the hospital where medics used a long tube to pull the snake from the woman’s mouth.

In the video that went viral soon thereafter, the woman is lying unconscious in the operating room while shocked medics struggle to pull the snake out of her open mouth.

When the snake’s head finally appears, a nurse is seen to recoil in shock and disgust as she sees the reptile wriggling. Another nurse is heard to be giggling nervously.

The snake is estimated to be at least one meter long. No further news about the woman’s condition appeared after the snake’s removal.

Soon after the video spread in the news and on social media, concerns were raised about its credibility. Journalists tried but failed to locate the victim and local medics denied they had performed such an operation earlier.

A specialist in snakes said that although such an incident was possible in theory, it is nonetheless highly unlikely. In addition, some viewers questioned the women’s odd inability to wake up at the time when the snake was crawling into her mouth.

The intrigue of the day is if this story is real or fake.

Click here to read the story about cannibal ants escaping from a Soviet-era nuclear bunker.