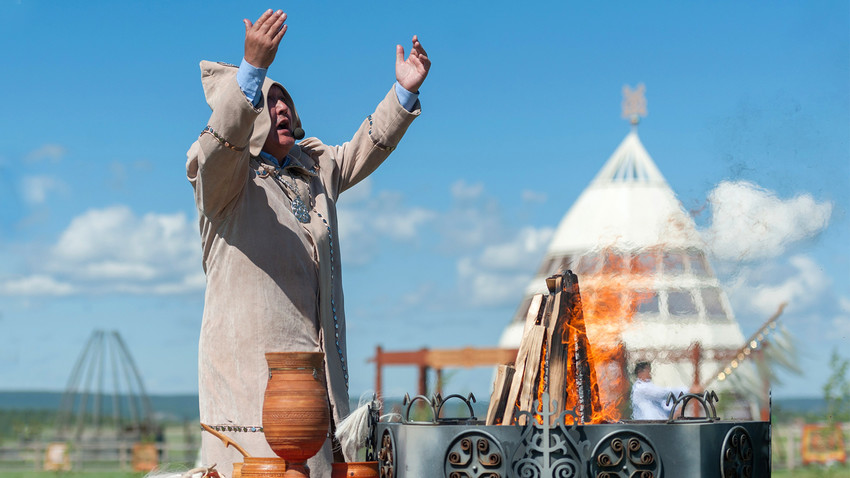 Evgeny Sofroneev/TASS
The rituals for some of these obscure religions can equally scare off or attract thousands of followers. Others may necessitate a prosecutor’s check. Find out what little-known religions some people in Russia belong to - and what it costs them.

In the middle of a forest, there stand cauldrons with sacrificial geese being cooked in them. Earlier, the birds’ wings, heads and feet had been cut off and carefully laid out on wooden trays. Nearby, “cutlets” are being prepared from the sacrificial animals' blood and a mixture of cereals. No one is touching the dishes until everyone together has taken part in a collective prayer at each of the five bonfires. 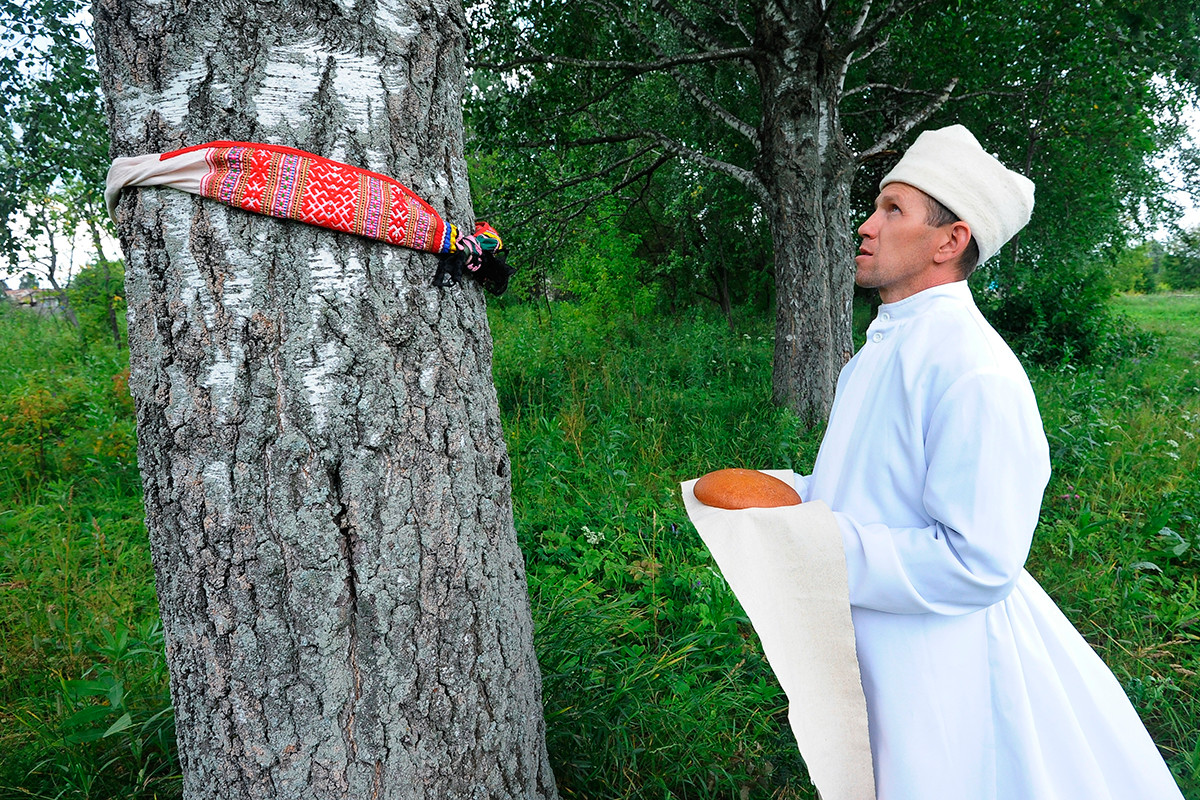 Prayer ceremony at the sacred tree.

This mysterious prayer is a pagan ritual that is officially practiced in Russia. Its participants can only be ethnic Maris - a people mainly living in the Republic of Mari El, in the east of the European part of Russia. Just a couple of centuries ago, for praying in the forest, the Mari were punished and exiled to Siberia, and their places of worship were blown up. Today, the traditional religion of the Mari - Marla - is treated with more respect. Although, like all neopagans, the Mari had to fight for their right to pray to spirits even in present-day Russia.

Spirits in a grove

“We were the only Maris in the village. But we were protected and covered for by our neighbors - they did not tell anyone how we were praying and we did not tell anyone that they were performing Orthodox prayers. My father was a ‘yumotan’ (translated from the Mari, it means “friend of God”, a person who could hold family prayers in any Mari family) and a communist at the same time,” says a resident of the village of Sernur.

The Mari found themselves under threat many times. Perhaps the biggest threat - baptism - came in the late 17th - early 18th century. The Mari did not want to convert to Orthodoxy even after they were promised substantial privileges, so the authorities adopted a different tactic - exile, beatings and higher taxes, which had to be paid to Russian Orthodox priests. In response, the Mari fled to the forests and continued to pray to their gods there. 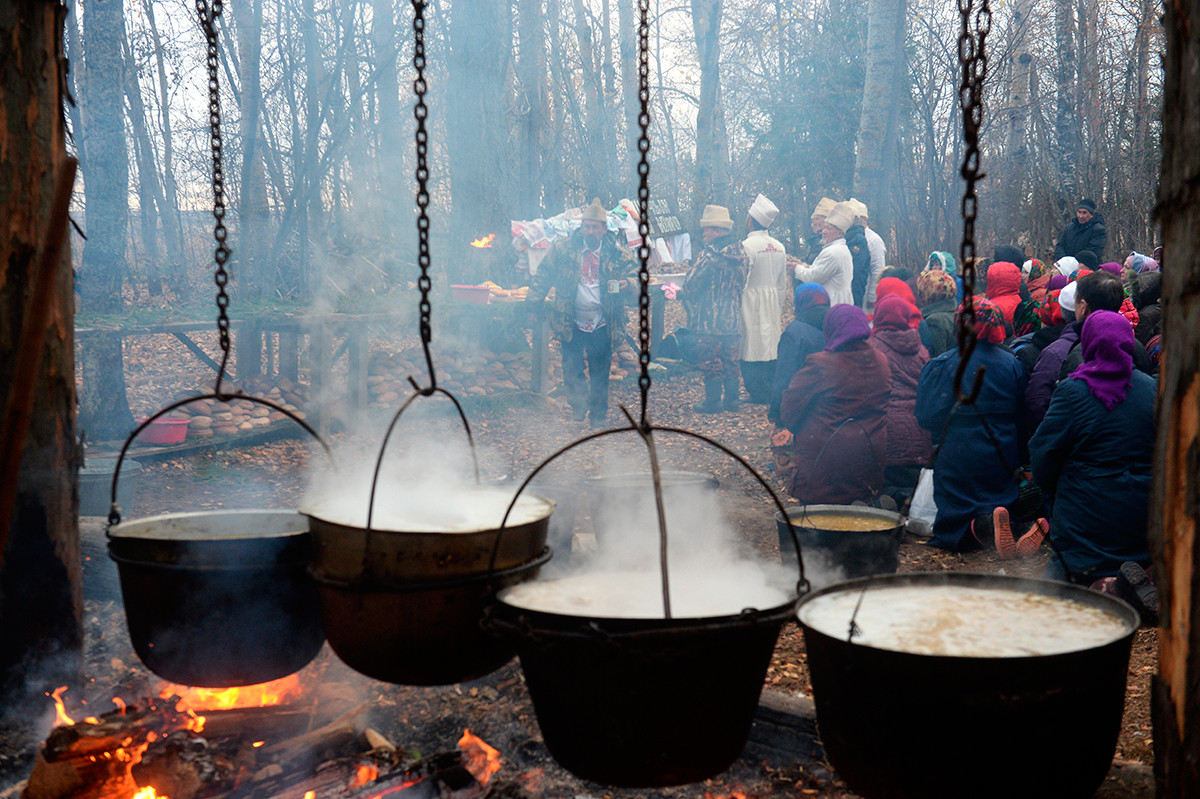 Just a couple of centuries ago, for praying in the forest, the Mari were punished and exiled to Siberia.

For them, a tree is a model of the world, it connects the underground world, the earthly world and cosmos. It is an intermediary between the gods, of which the Mari (depending on whether they live in the meadows or the mountains) have from 70 to 140. That is why the Mari go to pray to their sacred groves, which are chosen by the ‘kart’ (a Mari priest) according to certain parameters. In the present-day Republic of Mari El, there are more than 400 of these groves. Over the long years of co-existence side by side with the Russian Orthodox faith, the Mari have developed a mutually beneficial symbiosis of beliefs. According to official data, 67.3 percent of the republic’s residents now belong to the Russian Orthodox Church, 14 percent are pagans and 5 percent are Muslims. However, many of those who identify as Russian Orthodox believers also practice paganism. Dual faith makes things easier when outside conditions change. 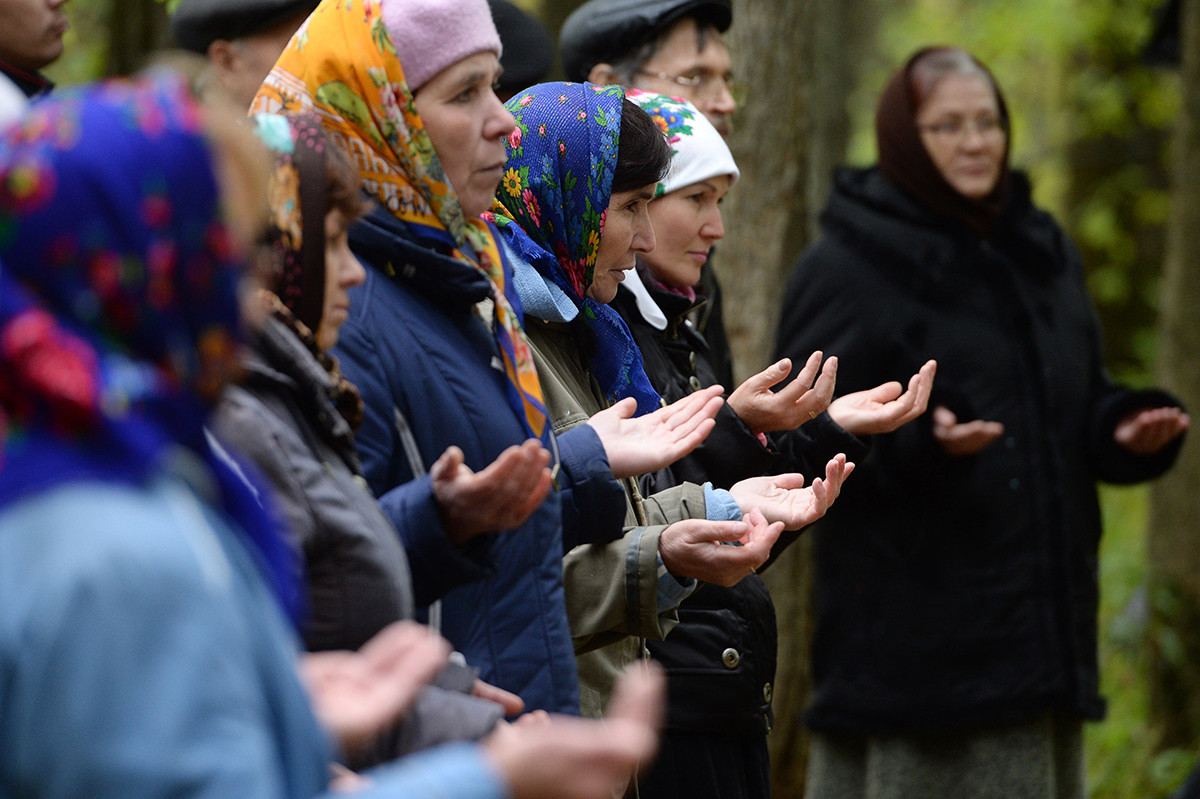 Accusations of “extremism” were first voiced against the Mari in the late 2000s, after the missionary department of the Moscow Patriarchate of the Russian Orthodox Church listed the Mari religious center Oshmariy-Chimariy (White Mari - Pure Mari) among “new religious organizations in Russia that have a destructive and occult nature”. That was when Marla was increasingly often mentioned in the context of religious extremism. One of its high priests, Vitaly Tanakov, was put on trial for publishing a book titled ‘The Priest Speaks’, which contained some disparaging comments about other religions (the book has been included on the Russian Justice Ministry’s list of extremist literature). And yet, the Mari pagan belief has survived in more authentic forms than many other pre-Christian cults. Mari El is sometimes described as “Europe’s last pagan reservation”. In fact, it is far from the last. 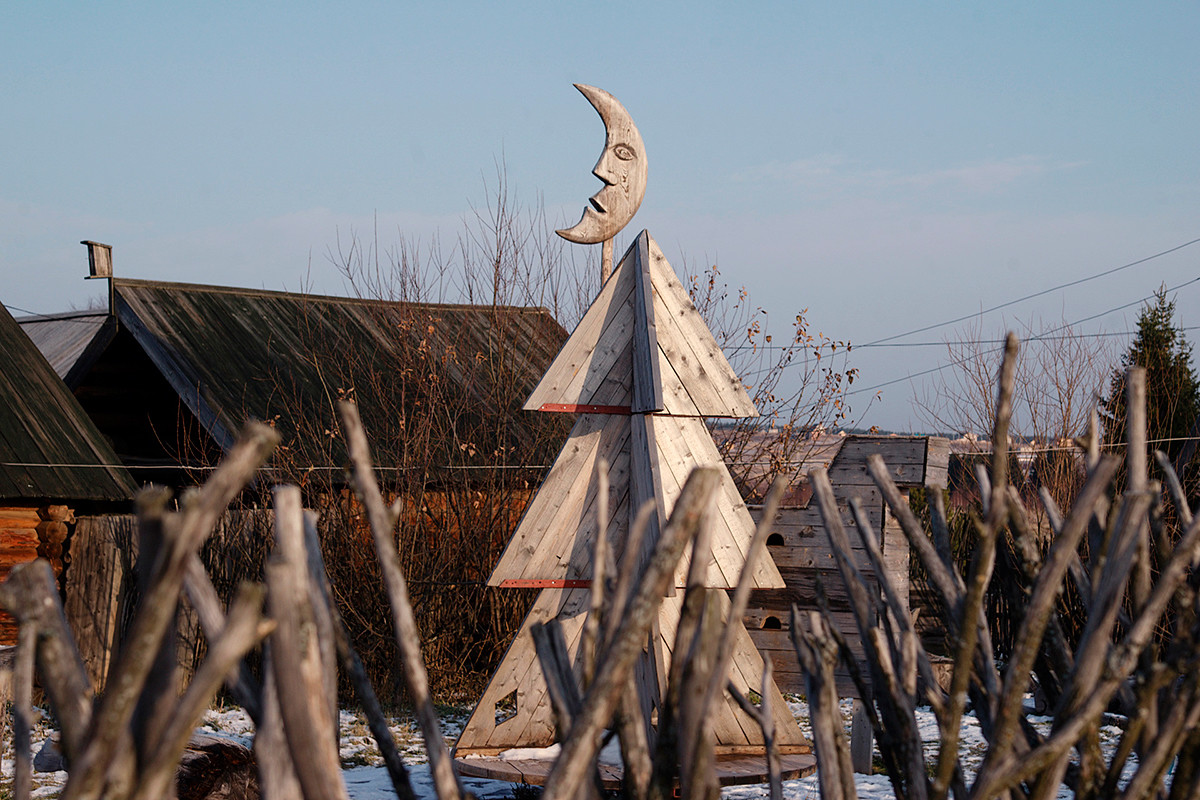 According to the 2012 All-Russia Atlas of Religions and Nationalities, some 1.7 million people in Russia (or 1.2 percent of the country’s population) profess the traditional religion of their ancestors, worship multiple gods and forces of nature. Most of those faiths are ethnic religions, whose fate is largely identical to that of the Mari belief.

Aar Aiyy, an ancient religion of the Yakuts, was officially recognized in Russia only in 2014, after being banned for 316. Public performance of its rituals and mass prayers in the sacred valley of Tuymaada were prohibited by a 1696 decree, with the arrival of ethnic Russians and the Russian Orthodox faith. Thus, mass worship of Aar Aiyy petered out and, by the 20th century, it was practiced by just a handful of people. No one has counted how numerous they are now. 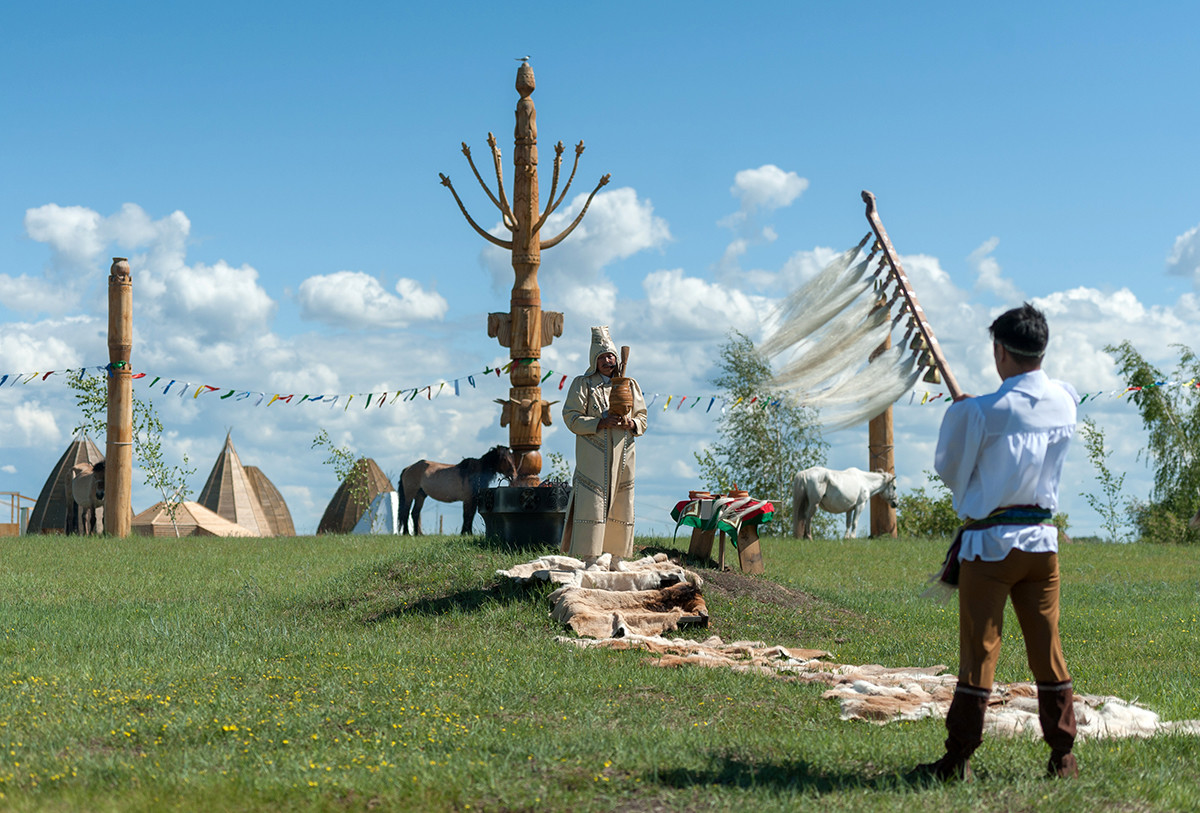 Rite of blessing Algys in Yakutia

“There is a religion called Tengrism, which existed before all religions, it is the progenitor of all beliefs. With this faith, Genghis Khan conquered almost the whole world. Aar Aiyy is its northern offshoot,” says David, an ethnic Yakut who promotes the culture and religion of the Republic of Sakha and believes that Aar Aiyy is the strongest faith “because it is in harmony with nature”. 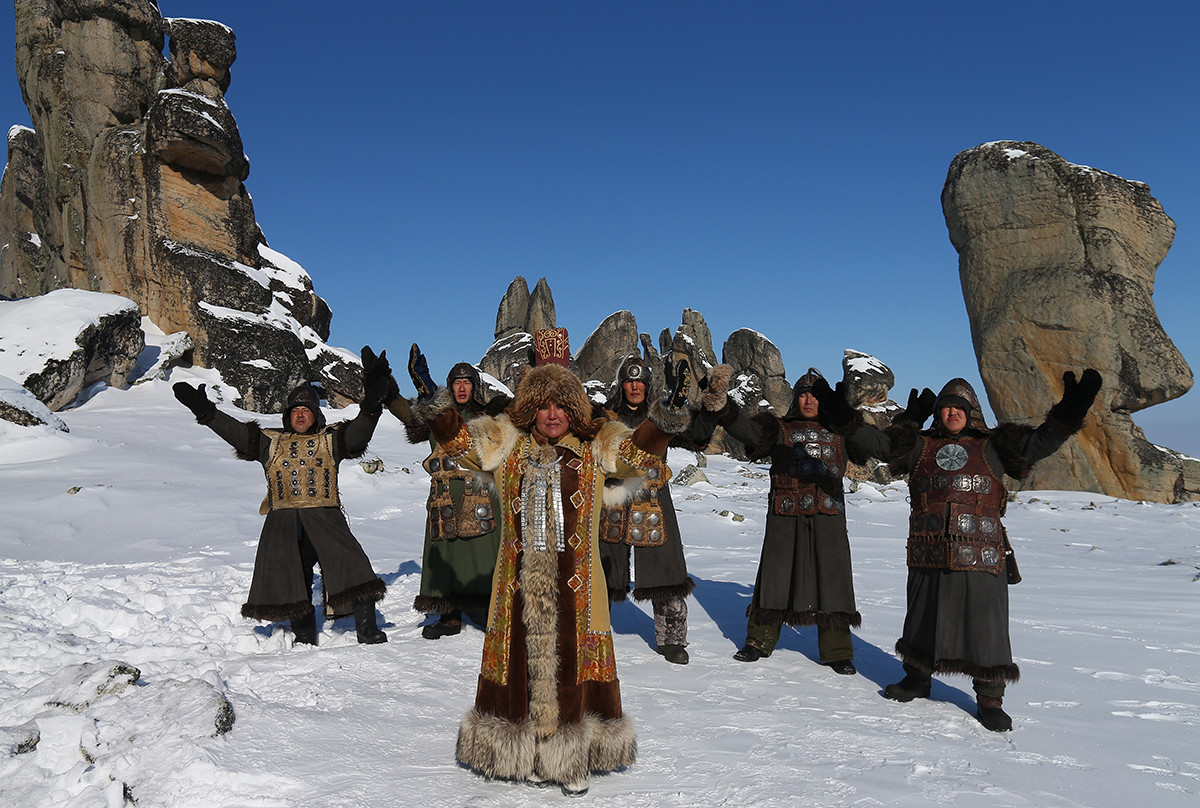 The Yakuts believe that the world consists of three parts: the upper world, where the supreme deities live, the middle world, where people live, and the underworld, the abode of evil spirits. What makes them different from all other pagans is that for the Yakuts, all objects in the middle world also have a spirit.

Every Yakut knows for whom a treat made of ghee and white horsehair is intended, or why the earth needs to be sprinkled with dairy products, but now these beautiful rituals are increasingly practiced not by priests, but by Yakut artists. The same is true for the Udmurts, a Finno-Ugric people living in the Middle Urals. 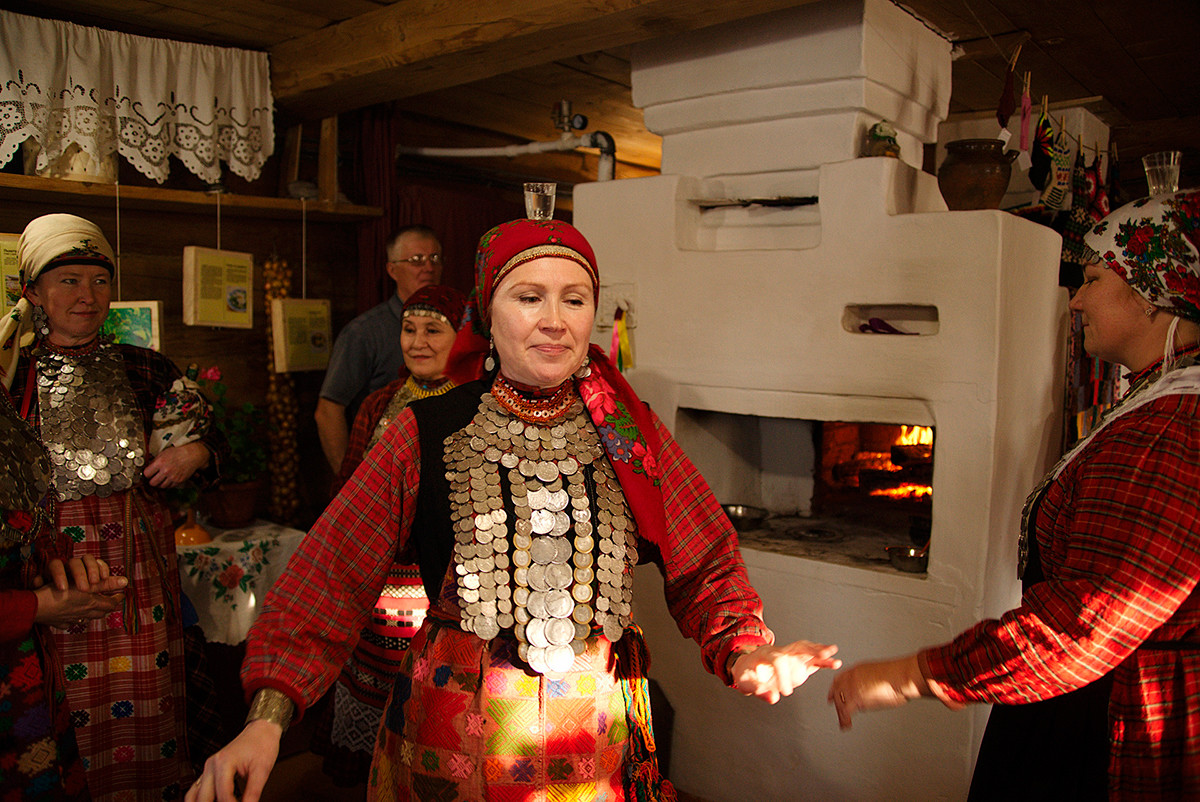 Back in 1960, 70 percent of the village of Karamas-Pelga was pagan.

Back in 1960, 70 percent of the village of Karamas-Pelga, in which Anna Stepanovna, an ethnic Udmurt, was born, was pagan. She remembers how the whole village stood in the field, arms outstretched to the sky. Now the sacred kuala hut, which looks like an ordinary Russian wooden hut, can be found only in the Ludorvay museum.

“The Udmurts are polytheists. We ourselves do not know how to describe what we believe in. The essence of our faith is Nature and there are many gods in nature,” says Svetlana, a researcher at Ludorvay. This small village 1,270 km east of Moscow, the only Udmurt reservation, has long turned into a “tourist attraction”. It is a frequent destination for press tours and school trips.

At the same time, new religious movements are gaining an increasing following in Russia.

Vegans in the taiga 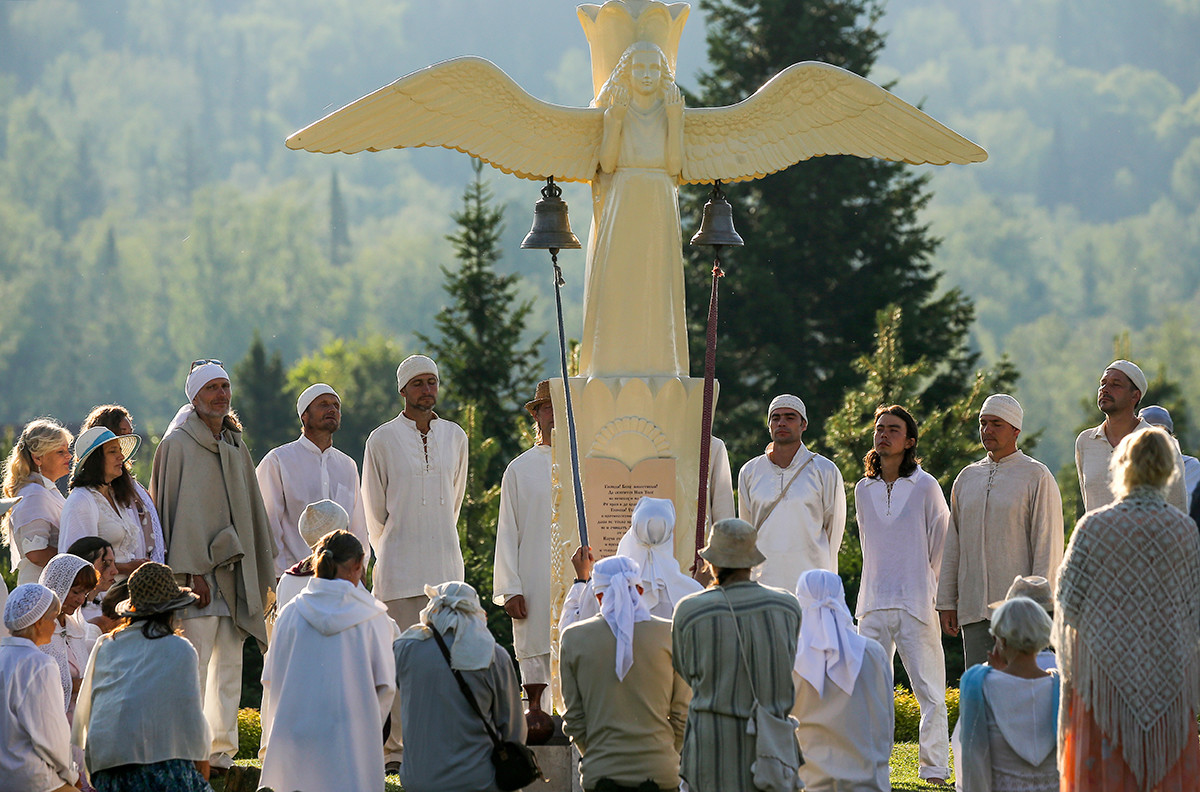 All its adherents live in anticipation of the end of the world.

In 1991, former traffic policeman Sergei Torop from Krasnoyarsk Territory took the name ‘Vissarion’, declared himself the messiah and founded a Church of the Last Testament. Some 5,000 people followed him to the south of Krasnoyarsk Territory to build a “Sun City” ecovillage there. To do that, they sold their apartments and other property. Many of them have nowhere to return to.

The ‘Church of the Last Testament’ is a blend of a bunch of world religions and practices, from Hinduism and Buddhism to Apocalypticism and the atheistic teachings of Karl Marx. All its adherents live in anticipation of the end of the world, whose date is being constantly pushed back by Vissarion. 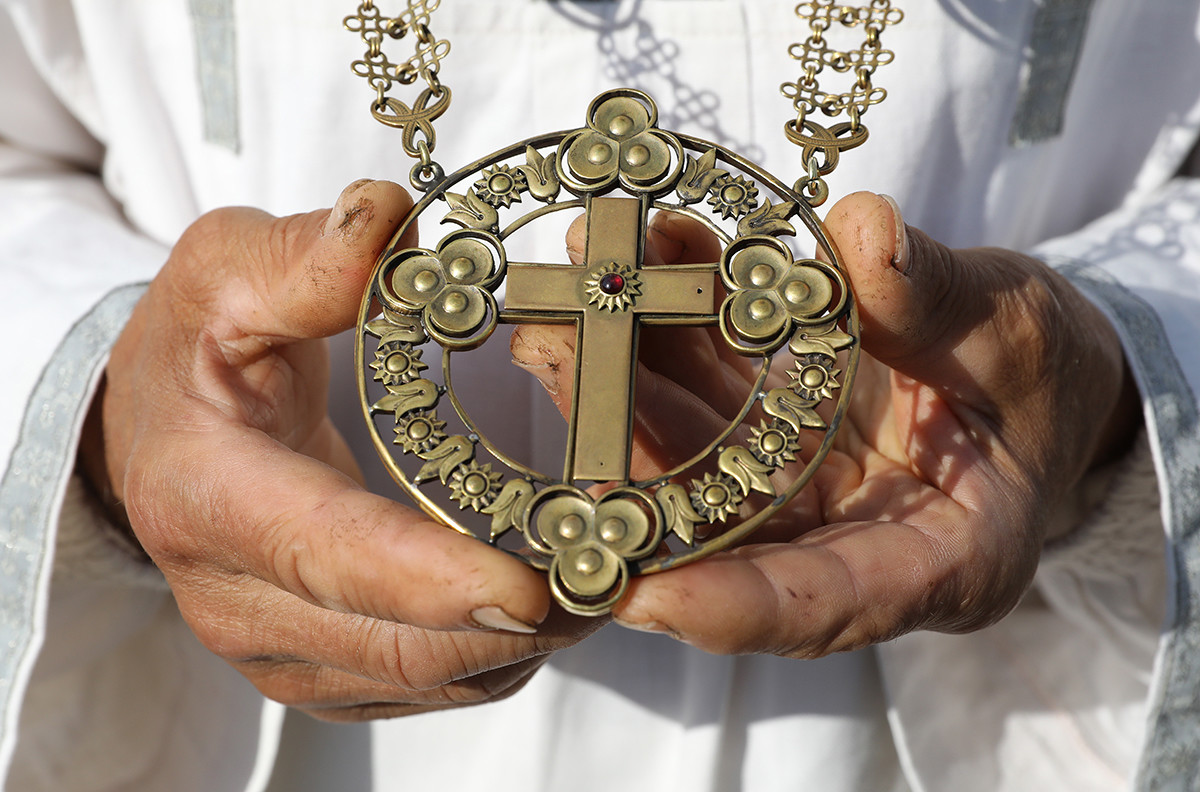 They adhere to a strict vegan diet in the Siberian taiga, reject traditional medicine and encourage polygamy.

They adhere to a strict vegan diet in the Siberian taiga, reject traditional medicine and encourage polygamy. Despite the fact that the Russian Orthodox Church and religious scholars describe this cult as a destructive sect, the ‘Church of the Last Testament’ has continued to operate unhindered in Russia for almost 30 years (it has registered with the Justice Ministry of the Russian Federation) and has acquired followers in Europe, the Middle East and the United States. Over all this time, it has attracted the attention of the law-enforcement agencies only a couple of times. The latest one was in 2019 and the probe has not yet been completed. 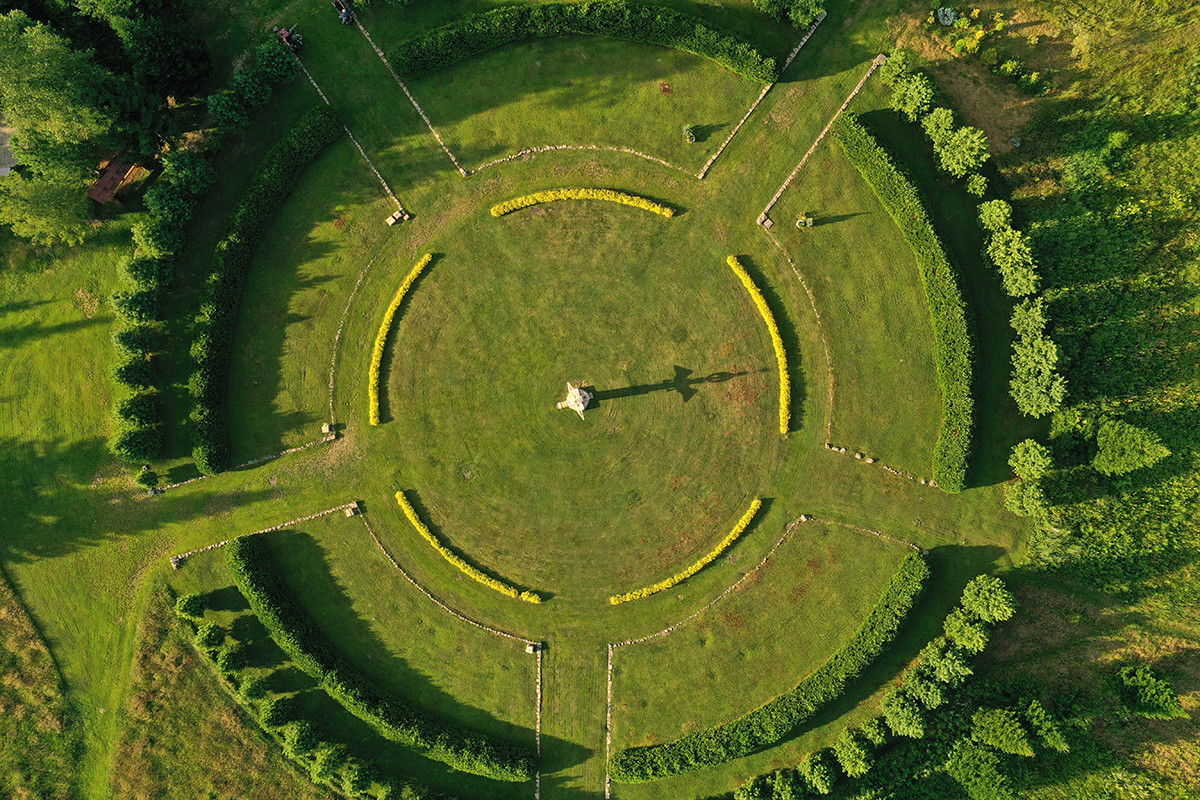 Professor and deputy chairman of the Justice Ministry’s expert council Alexander Dvorkin points out that the existence of this cult is “an absolutely impossible situation”: “Inside the Russian Federation, there is a territory the size of two-thirds of Belgium, which in effect lives by its own laws and in which the local authorities do not interfere. This gives reason to suspect that there is a huge number of unrecorded deaths there. A child dies from lack of medical care or hunger, he or she is buried there, in the taiga, without any investigation and that is the end of it.” 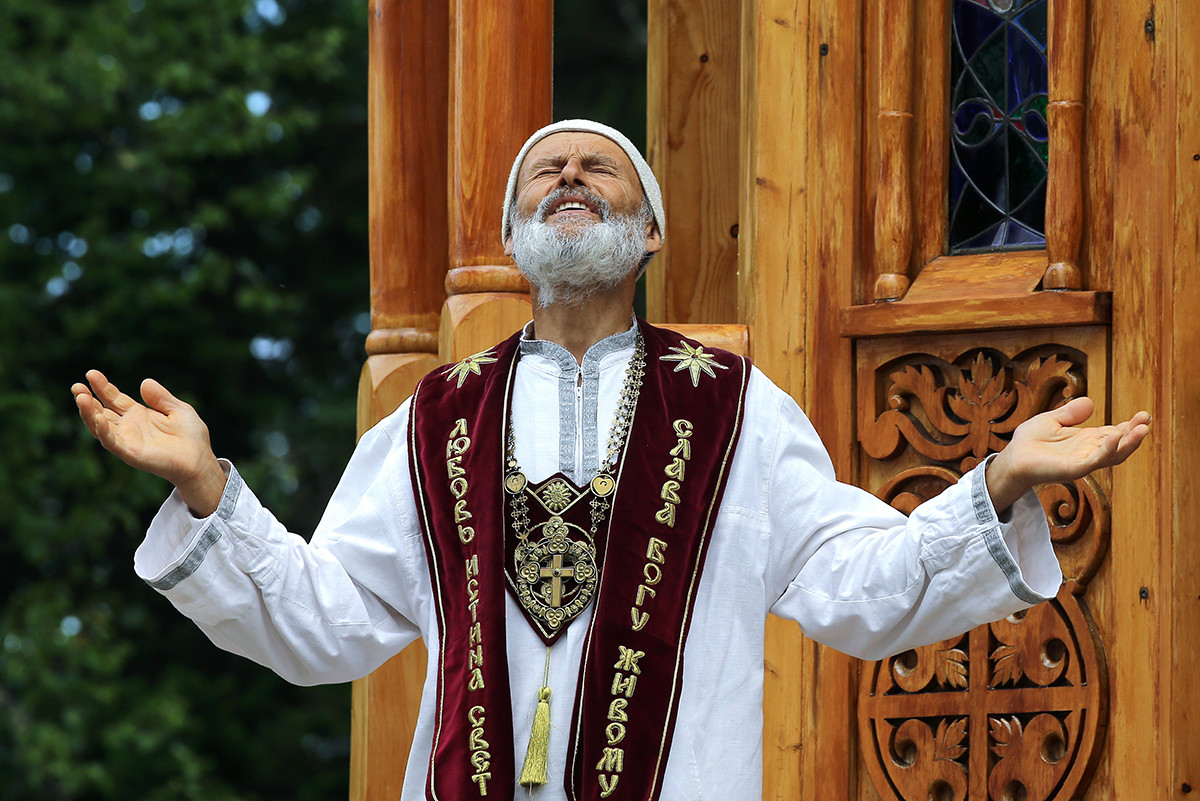 ‘Church of the Last Testament’ is a blend of a bunch of world religions and practices.

And yet, the Investigations Committee has shown much more interest in the economic successes of Vissarion’s church. Over all these years, the cult has amassed so much real estate that a Russian oligarch could only dreamt of: every family among its followers donated their assets to the church, but no one ever counted how much it was. Tax declarations and financial monitoring have no place there, funds to all those “in need” go “straight into their hands”, without any control from the supervisory bodies. There is also a theory that for a long time the ‘Church of the Last Testament’ was not touched for fear of mass suicide by its adherents.

Cabalism under the guise of yoga

There are also religious movements in Russia that seek to be as different from what they are as possible. Followers of ‘Agni Yoga’ (also known as ‘Living Ethics’) believe that the family of the famous Russian artist and philosopher Nicholas Roerich, through clairaudience, received a teaching from above, which they formalized in 14 books. They are based on the theosophical concept of an infinite universe, reincarnation of souls, esotericism, transhumanism and all types of yoga. According to the teaching, all the revelations were dictated to the Roerichs by a “Great Teacher” between 1920 and 1940. 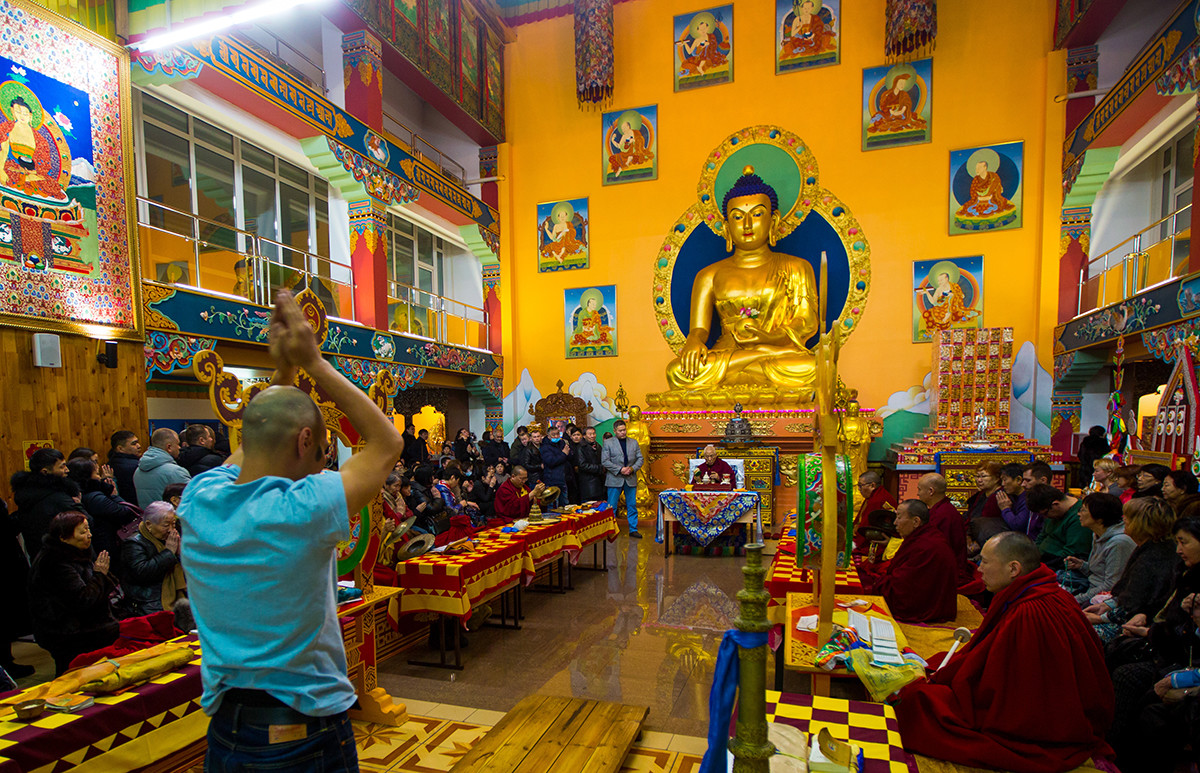 This doctrine, which originated from Russia, has gathered thousands of followers both at home and in the West, particularly in the United States. Furthermore, like all other New Age ideologies, it imitates social and humanitarian teachings and practices and denies any connection with religiosity. However, this does not always work.

In August 2016, the Russian Culture Ministry revoked a screening certificate for the film ‘The Call of Cosmic Evolution’ for promoting sectarian ideology, and the prosecutor’s office banned the International Center of the Roerichs from holding religious rituals in the Center’s premises located in the heart of Moscow. The ban concerned the Buddhist ritual Sunju Kantsena (a tradition of the Drepung Gomang monastery in India), for which the Roerich followers charged participants a fee of 500 to 1,000 rubles (approx. $7-13) per person.