Russia has the world’s ONLY floating cosmodrome. And it may be back in business! 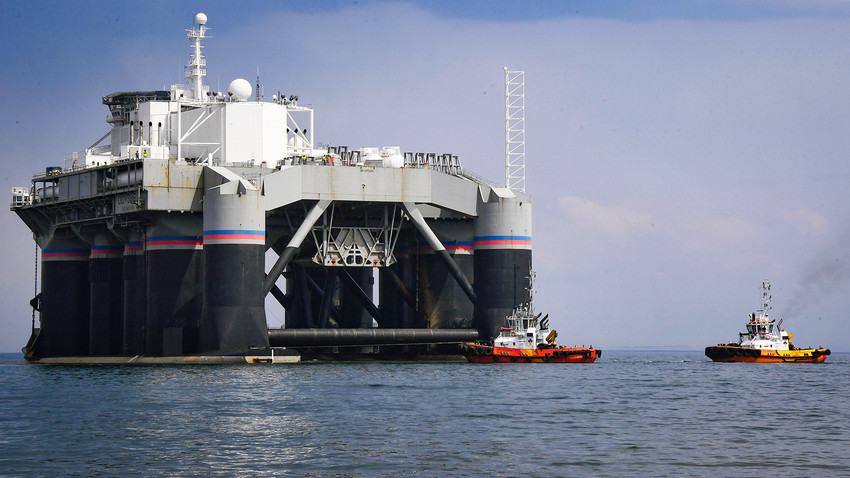 Vitaly Ankov/Sputnik
The unique structure was almost decommissioned in August 2020. Now, the government is suddenly pumping billions into it!

The ‘Morskoy Start’ (aka ‘Sea Launch’) floating cosmodrome has been a source of pride and hope for the country, ever since it passed into private hands. First of all, it was the first cosmodrome that did not belong to the state - as well as Russia’s only privately-owned “heavy” cosmonautics project; secondly, Russia really had to fight for it; and thirdly, no one else had one like it. 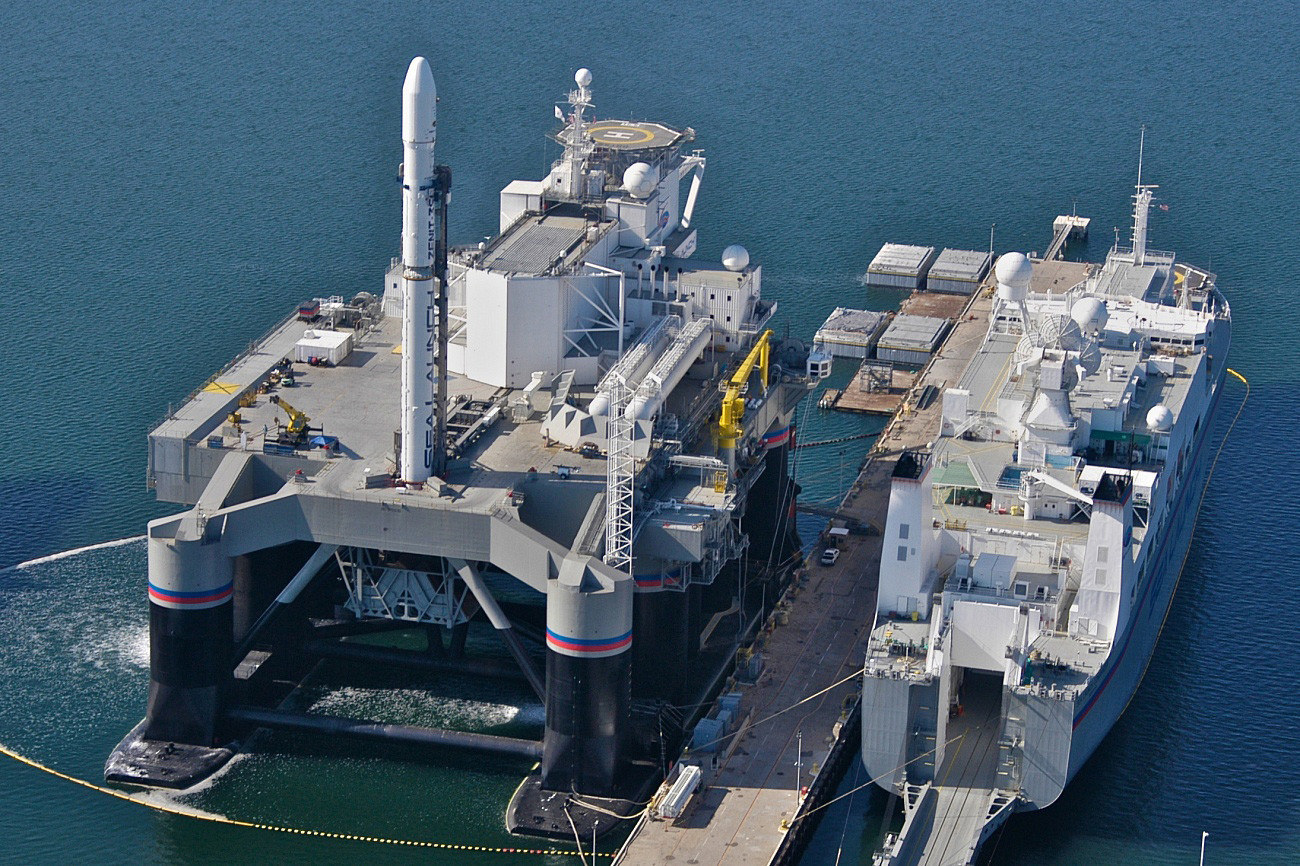 That last factor is, arguably, the most exciting. After all, the mobile cosmodrome, situated smack in the middle of the Pacific Ocean, enables Russia to launch missiles right from the equator. Such a geographical position allows for the most efficient use of the Earth’s spin, which translates into the ability to launch much heavier loads. Even Elon Musk is a fan of the idea.

How did Russia acquire the cosmodrome?

At first, the project was international, but with Russian roots. In 1993, the idea to have a floating cosmodrome was hatched by a company called ‘Energia’ - the leading rocket-building corporation in Russia. The country just didn’t have the funds for it. A decision was then taken to attract foreign partners. Stock was then divided among Boeing (40%), Energia (25%), Ukraine’s ‘Yuzhnoe’ and Yuzhmash’ design bureaus (5% and 10% respectively) and the Norwegian company ‘Aker Kvaerner’ (today Aker Solutions).

Luckily, a Baltic port had a self-propelled drilling platform, the ‘Odyssey’ - which burned in 1988, entering record books as one of the biggest maritime disasters in human history. After that, the platform was never used again, its partially rusted body sitting in the docks of Scotland’s Dundee. The platform was subsequently hauled back home for repairs in Vyborg. 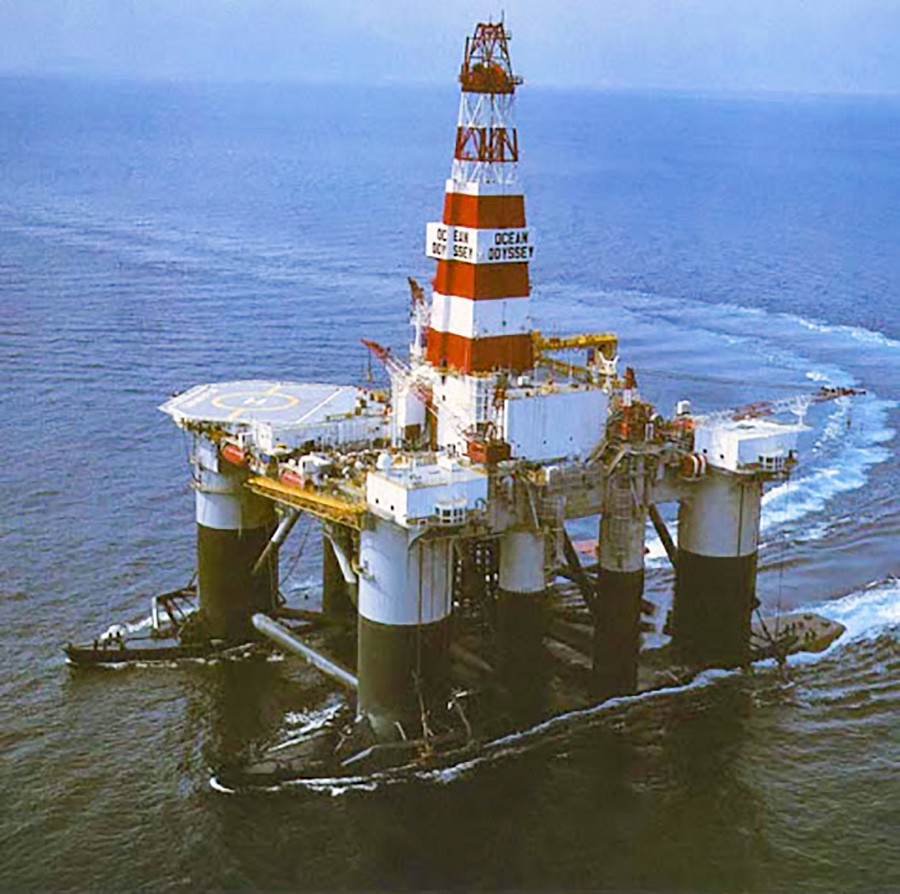 The Odyssey, the vessel attached to it, as well as all the equipment, together with the ground base in Long Beach, California - all of that together made up the ‘Morskoy Start’ project. Since 1998, some 36 launches have been carried out there - 32 of them successful. This wasn’t enough to compensate for the spending, however. Therefore, in 2009, the consortium filed for bankruptcy. The infrastructure first passed into Energia and Roscosmos hands, followed in 2016 by private space company ‘S7 Space’. Bloomberg sources then estimated its value at $100 million. 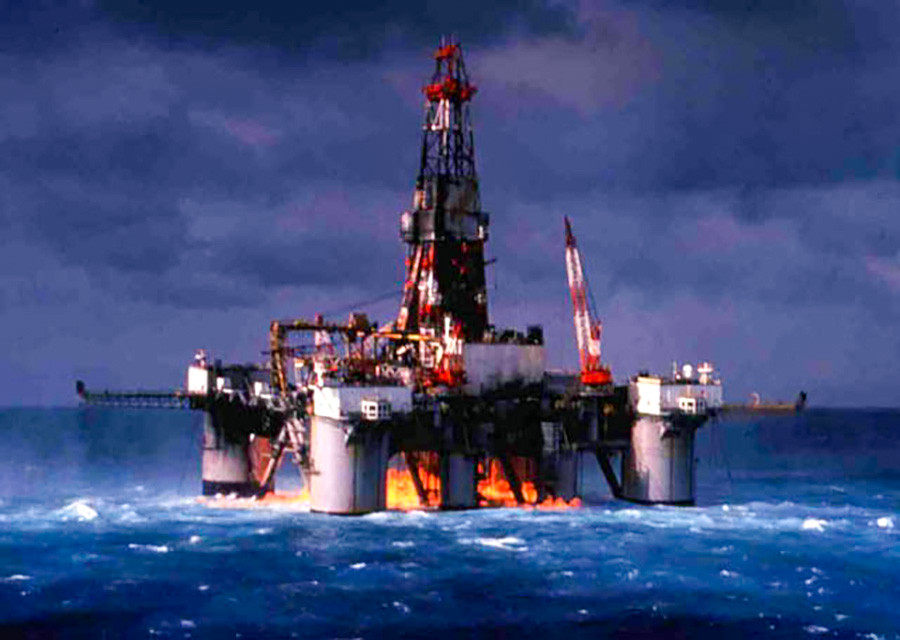 Morskoy Start then became S7 Space’s key asset. The company planned to compete with Elon Musk’s SpaceX, creating its own launch vehicle in the process. Since then, S7’s founder, Vladislav Filev, has been compared to Musk and Amazon founder Jeff Bezos, with talk of an interesting space race ahead. The trouble with S7’s purchase at the time was that it wasn’t in top condition or bringing in any money. The project was mired in all sorts of issues that the company at the time thought it would overcome.

One of the main obstacles faced by the project today is a simple lack of rockets. Due to the events in Ukraine in 2014, the country’s Yuzhmash bureau has refused to supply Morskoy Start with the Zenit rocket, specially adapted for use with it. The project’s privatization did not solve the issue, either. The complex delivery scheme involving Ukraine, the United States and Russia did not materialize. 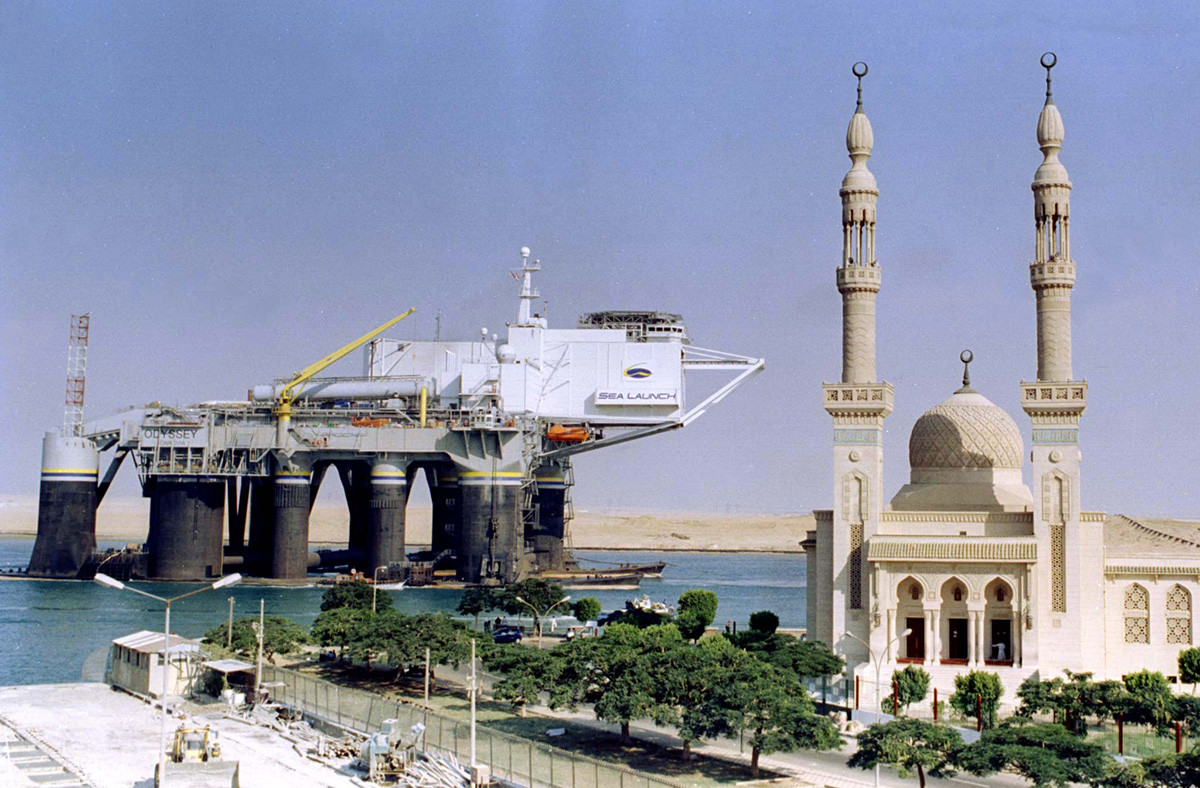 The Sea Launch Odyssey platform sails past a mosque as it exits the Suez Canal on its way south into the Red Sea in 1998.

The company then bet on Rosckocmos’s ‘Soyuz-5’ (‘Irtysh’) rocket, but it will only be available in 2023. Seeing as the rocket couldn’t be launched from US territory, the entire cosmodrome had to be hauled across the Pacific into the Primorsky Region. The project required creating a separate infrastructure from scratch. The platform had been standing idle since 2014, the year it hosted its last launch. 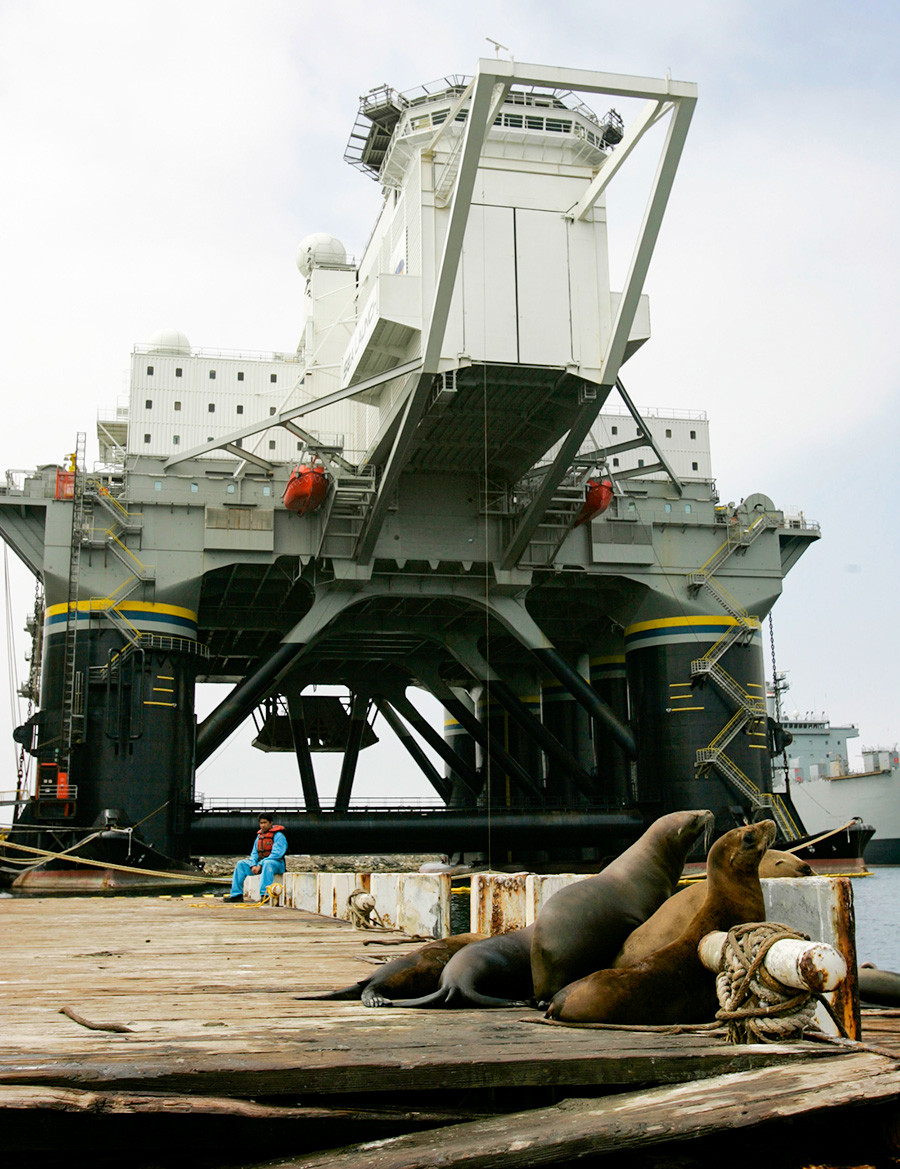 The coronavirus looked to be the final nail in the coffin of S7’s ambitions. In light of the resulting financial losses incurred by the company, the cosmodrome was put up for sale as a non-core asset. As recently as June 2020, no one saw any sense in acquiring the project.

Prestige is worth more than money

Neither ‘Rosatom’ - one of the most prominent buyers - nor any state corporations wanted to pump billions of rubles into an unprofitable project, while locked in competition with Elon Musk’s projects. A source close to ‘Roscosmos’ revealed that S7 was ready to send the platform to the scrapyard if a buyer wasn’t found in time. However, this is definitely no longer the case.

Deputy Prime Minister Yury Borisov spoke at the ‘Army-2020’ weapons expo in Russia about the plan to revive the cosmodrome, reportedly to the tune of 35 billion rubles (approx. $465 mln) (earlier, Rosatom put the projected figure at 91 billion [approx. $1.3 bln], factoring in inflation - which is eight times the price asked by S7). The decision was taken after consultation with President Vladimir Putin, Borisov said. 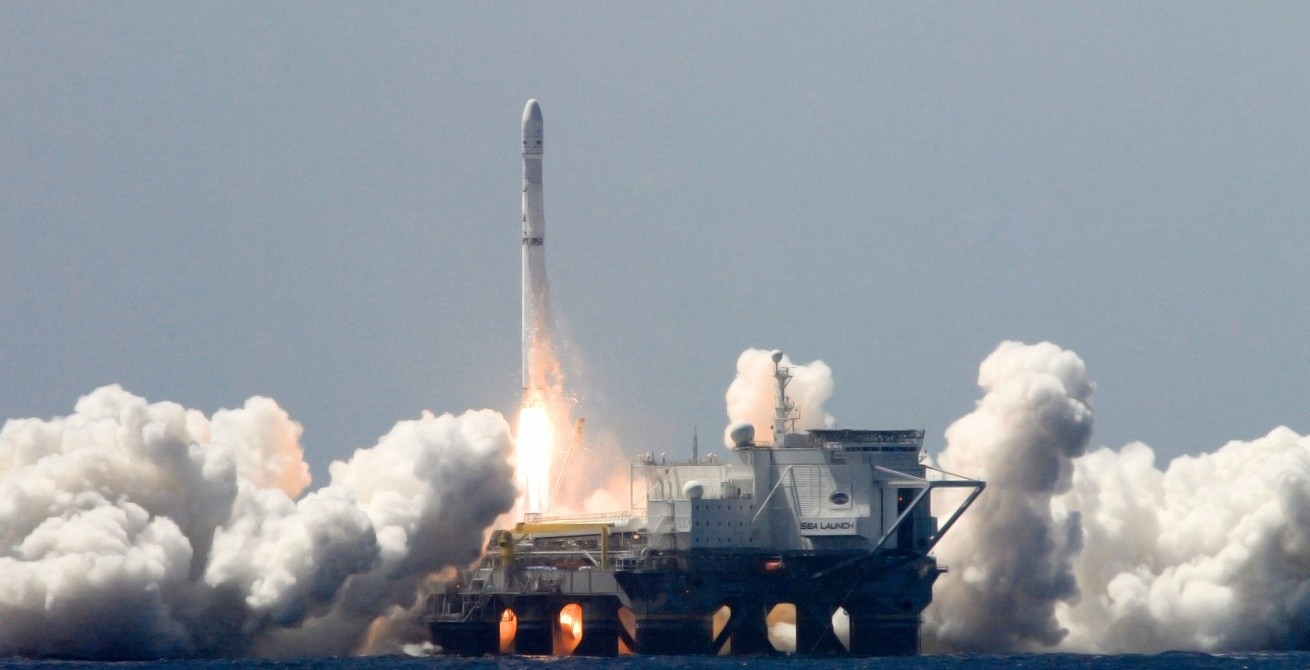 The source of financing remains “an open question”. Rosatom, Roscosmos and S7 are expected to join the board of investors, also predicted to include “other various funds and banks - as we need the money”. Borisov explained the decision to reinvest in the program in that “It would be stupid not to renovate ‘Morskoy Start’ and make use of it. All of this is technically possible.”

Independent experts see only one real reason for doing so: the prestige that comes with it. “It is after all an interesting project from a technical standpoint - the only floating platform in the world,” said Vitaly Egorov, the founder of the ‘Open Space’ project.

According to Egorov, Morskoy Start is not commercially vital to Russian interests. “It will indeed compete with the Russian ‘Angara-A5’ and the ‘Vostochny’, there won’t be enough government or commercial missions for both projects, while competing with SpaceX on the global market will be tough.” 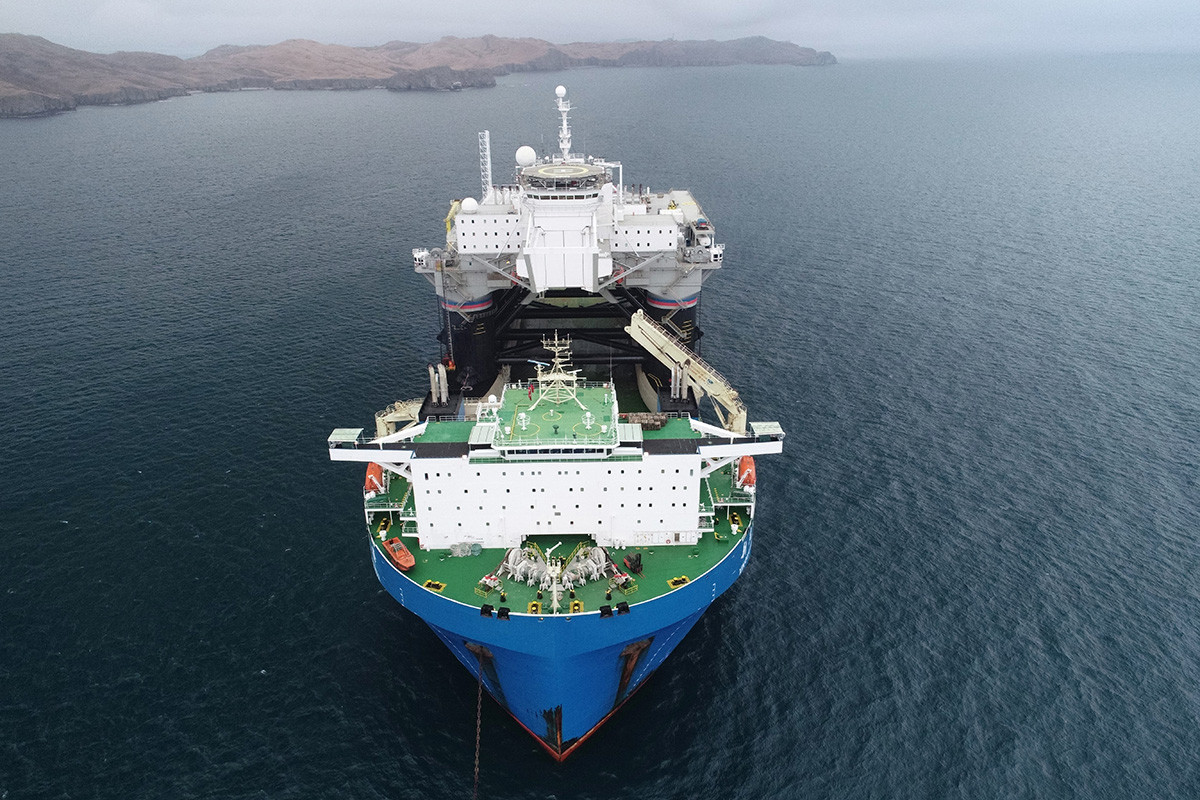 The fact that the unique project is being practically crammed down buyers’ throats seems to indicate that it’s the only way, according to former ‘Sukhoy’ constructor, Vadim Lukashevich: “Only the government is capable of shouldering the Morskoy Start purchase. And it doesn’t matter whom it places on the board of investors - Rosatom, Roscosmos, OAO Unified Energy System of Russia, Sberbank, Gazprombank, VTB, as no businessman in their right mind would invest money in a venture that went bankrupt twice, each time with a huge scandal.”