Lifestyle
Yulia Afanasyenko
Many species in Russia are included in the Red List of endangered animals, but they still manage to keep popping up in megapolises. 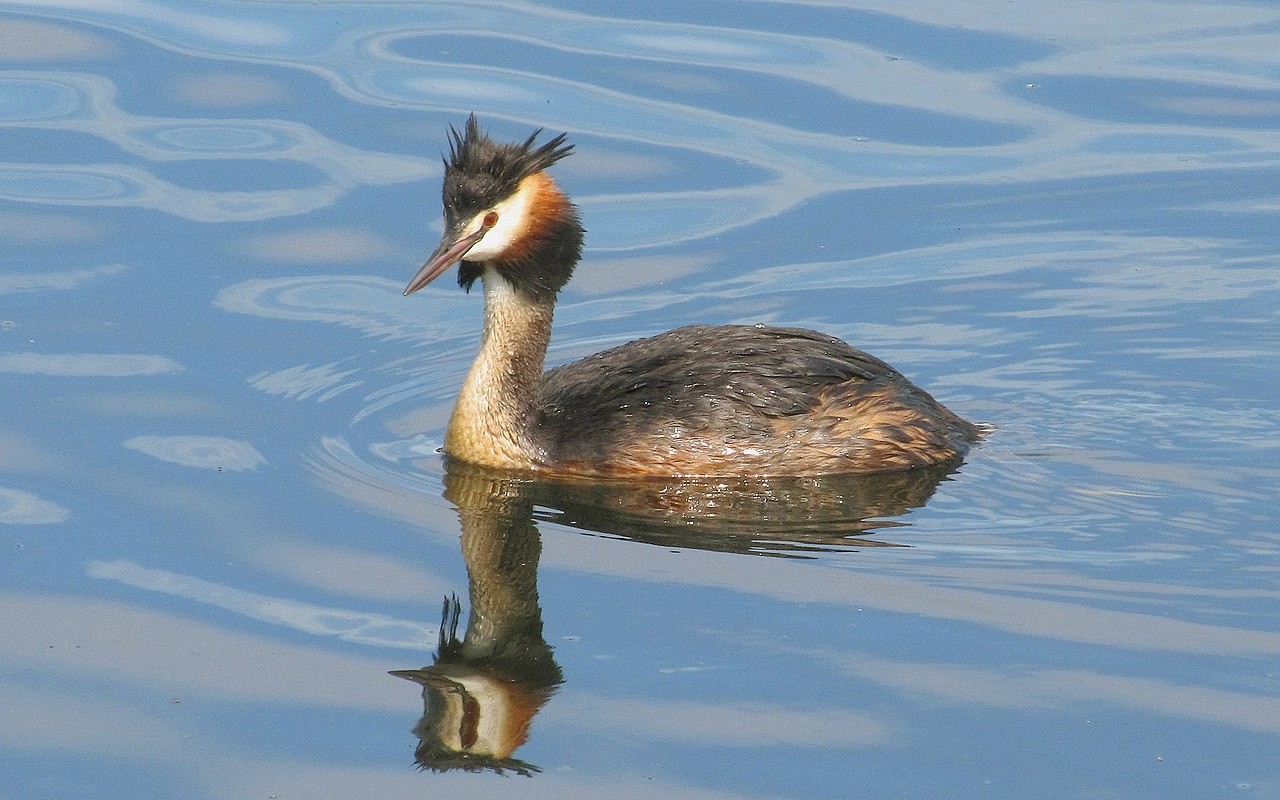 The great-crested grebe is a rare endangered species that inhabits Europe, Middle Asia and Southern Siberia. It also lives in big cities; for example, it’s known for settling in Moscow parks like Izmailovo. The total population is unknown.

The grebe is an aquatic bird that prefers the standing water of big lakes and ponds, but in spring, it can occasionally choose rivers like ducks. These birds stay in couples and often integrate into colonies of gulls. They don’t have many nestlings, as they lay 1-3 eggs. Young nestlings are at first fed with insects, but as they get older, they start eating small fish like adult great-crested grebes. They have a particular way of moving their nestlings: not only under their wings, but also on their backs.

The species is endangered because of hunting, pollution and the drying-out of bodies of water. 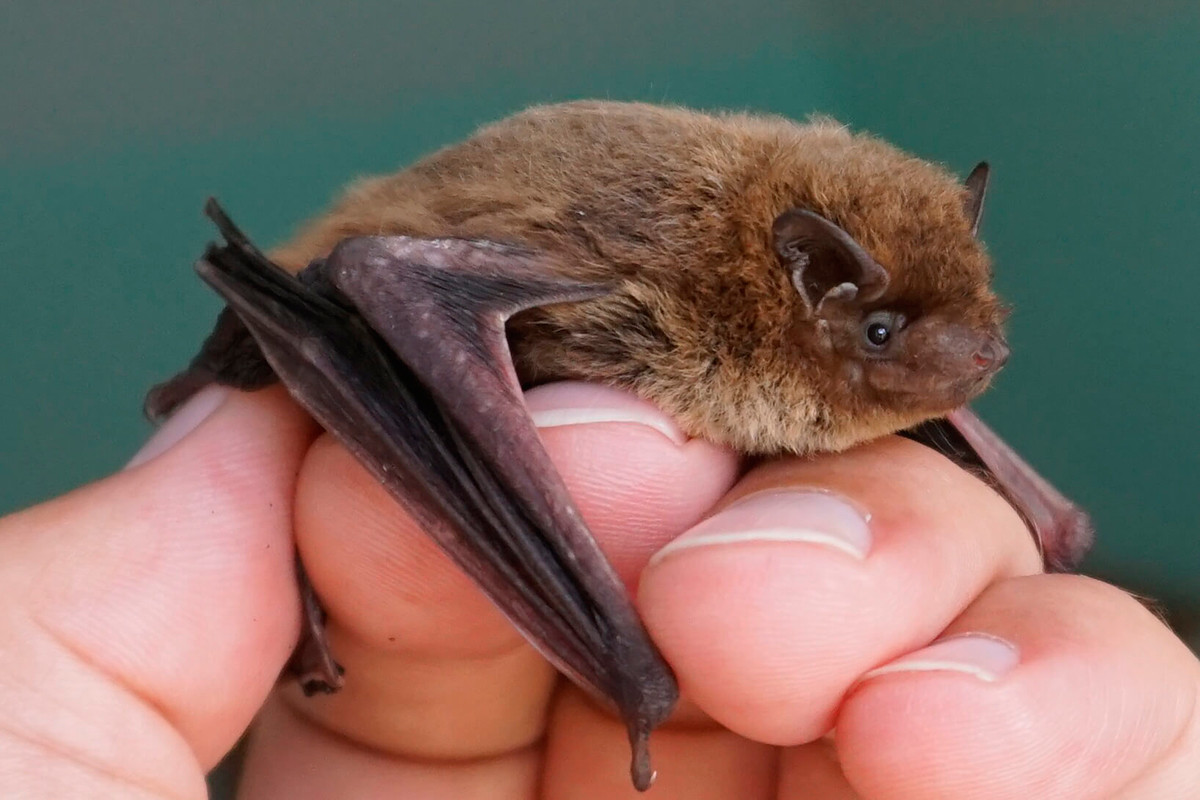 The pipistrelle is one of six bat species that inhabit Moscow. The pipistrelle is rare and endangered. It can also be found across Europe. After the 1970s, their number started to decline rapidly. At the start of the 21st century, pipistrelles were seen in Sokolniki park and Losiniy Ostrov (“Elk’s Island”) national park.

The pipistrelles are a migrating forest species that prefer mixed and leafy terrain, often settling near grass glades in tree hollows. Moreover, they can sometimes be seen in abandoned garden-plots. Female bats stay in colonies, while males usually live alone or near their mother colony. Pipistrelles feed only during a flight and eat various insects and butterflies.

The number of these bats is declining, due to the city urbanization and pollution. 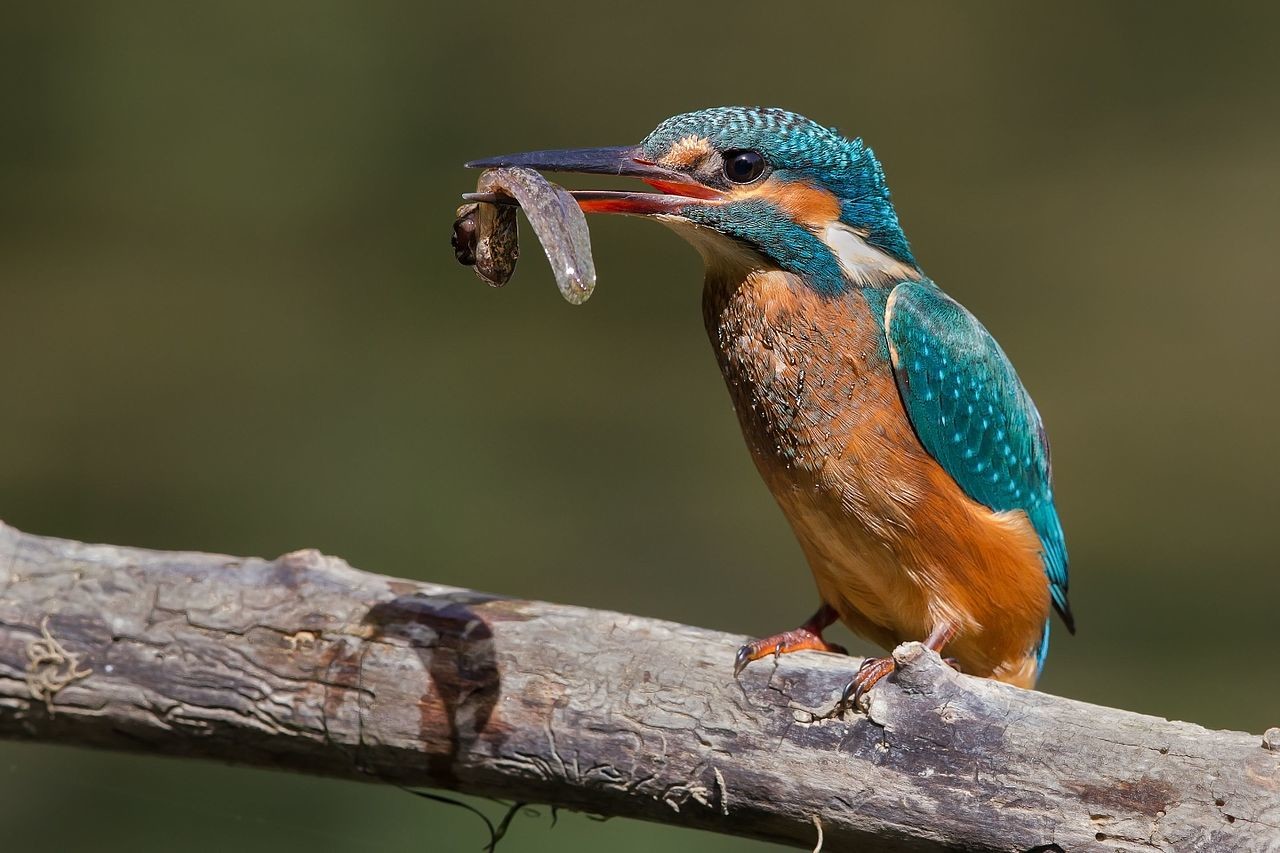 The kingfisher is a colorful, but vulnerable, bird species that lives in the central part of Russia, Northern Africa and Europe. It’s sometimes seen in St. Petersburg (600 km north-west of Moscow), especially in the Krasnoselsky and Petrodvortsovy districts. Thankfully, their number has been slowly growing in recent years.

Kingfishers usually settle on the loamy banks of rivers with clear water. They nest in divided couples, making holes about 1 meter deep into the ground. A female kingfisher usually lays 6-7 eggs. The birds’ feathers get brighter as they grow older. The pattern of colors can differ, too. Kingfishers hunt fish looking at the water from a bank or flying low above the river. They can dive up to 30 centimeters deep to catch a fish.

The species is endangered because of water pollution, building-up of river banks, declining number of fish and human disturbance. 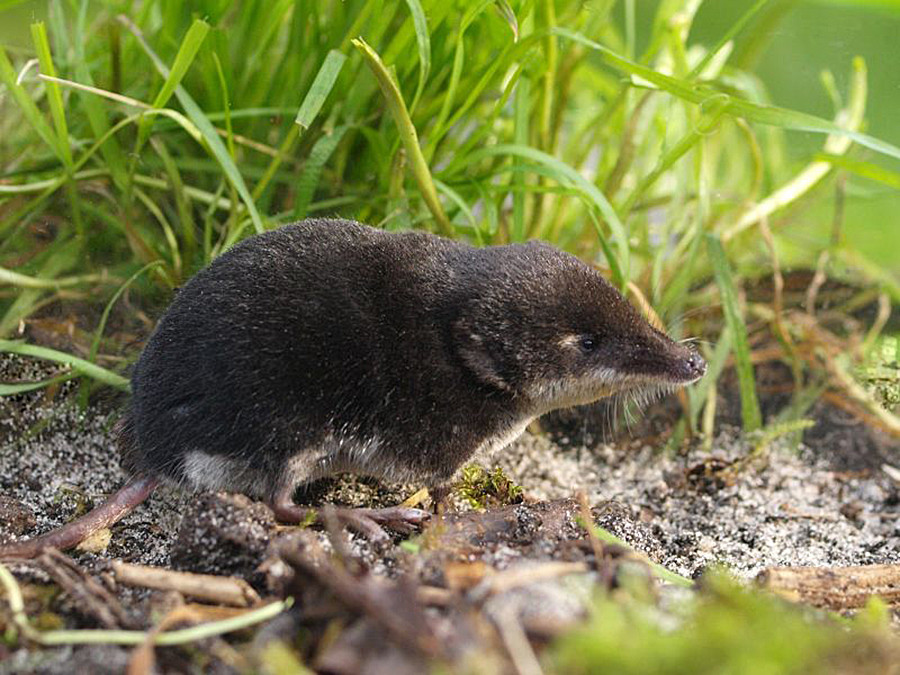 Red book of the Tambov Region

The eurasian water shrew is a rare species that inhabits Europe and Asia. In Russia, it can be found anywhere from the Western part of the country to the Far East. It also lives in big cities; for example, in many districts of Moscow and St. Petersburg. However, this animal’s total number has been exceedingly low for many years now.

Eurasian water shrews prefer clean rivers and usually settle on their banks, especially if they are slumpy. Each animal usually lives alone in abandoned holes of other rodents, but it can also make a hole itself. It gives birth three times a year, 5-9 younglings at a time. This shrew’s particularity is that its saliva is poisonous for small invertebrates, who don’t die, but get paralysed. The shrew eats many animals, ranging from insects to juvenile fish and caviar.

River pollution, slump drainage and building-up of banks all threaten the number of the eurasian water shrews. 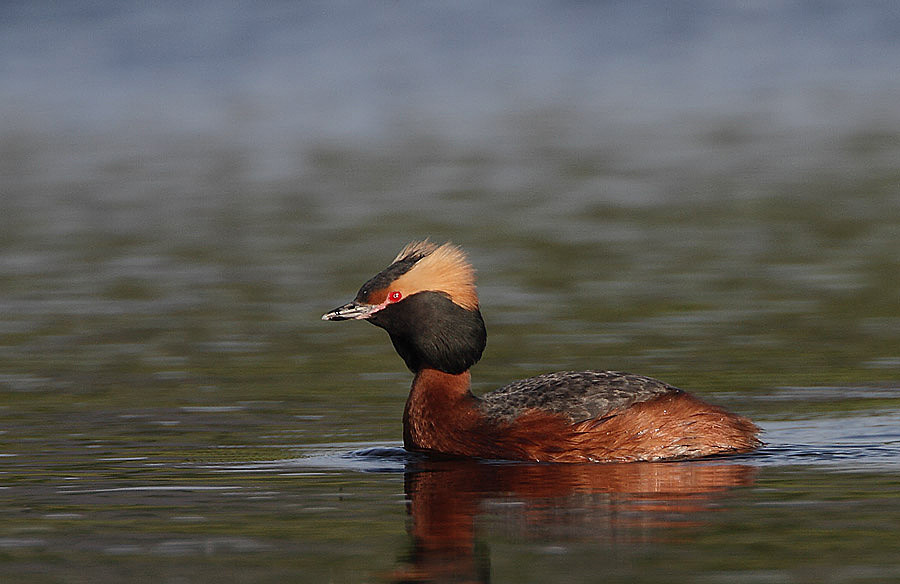 The horned grebe lives in Northern America, Europe and Asia, including Russia, and it’s sometimes found nesting in big cities, for example, in Yekaterinburg (1400 km to the east of Moscow) and surrounding towns. The species is rare and its number is also declining.

This beautiful bird chooses to live in solitary couples near shallow slumpy lakes with lots of water plants and doesn’t hesitate to settle close to people or other grebes.

The horned grebe uses rotten plants to build nests, which are often hidden in the grass on a dump bank or nearby bushes. It usually lays 4-5 eggs. This bird eats water invertebrates, but sometimes can catch small fish.

Falling water levels, deforestation of the territories near lakes and fishery (these grebes often get caught and die in fishing nets) have made this species endangered. 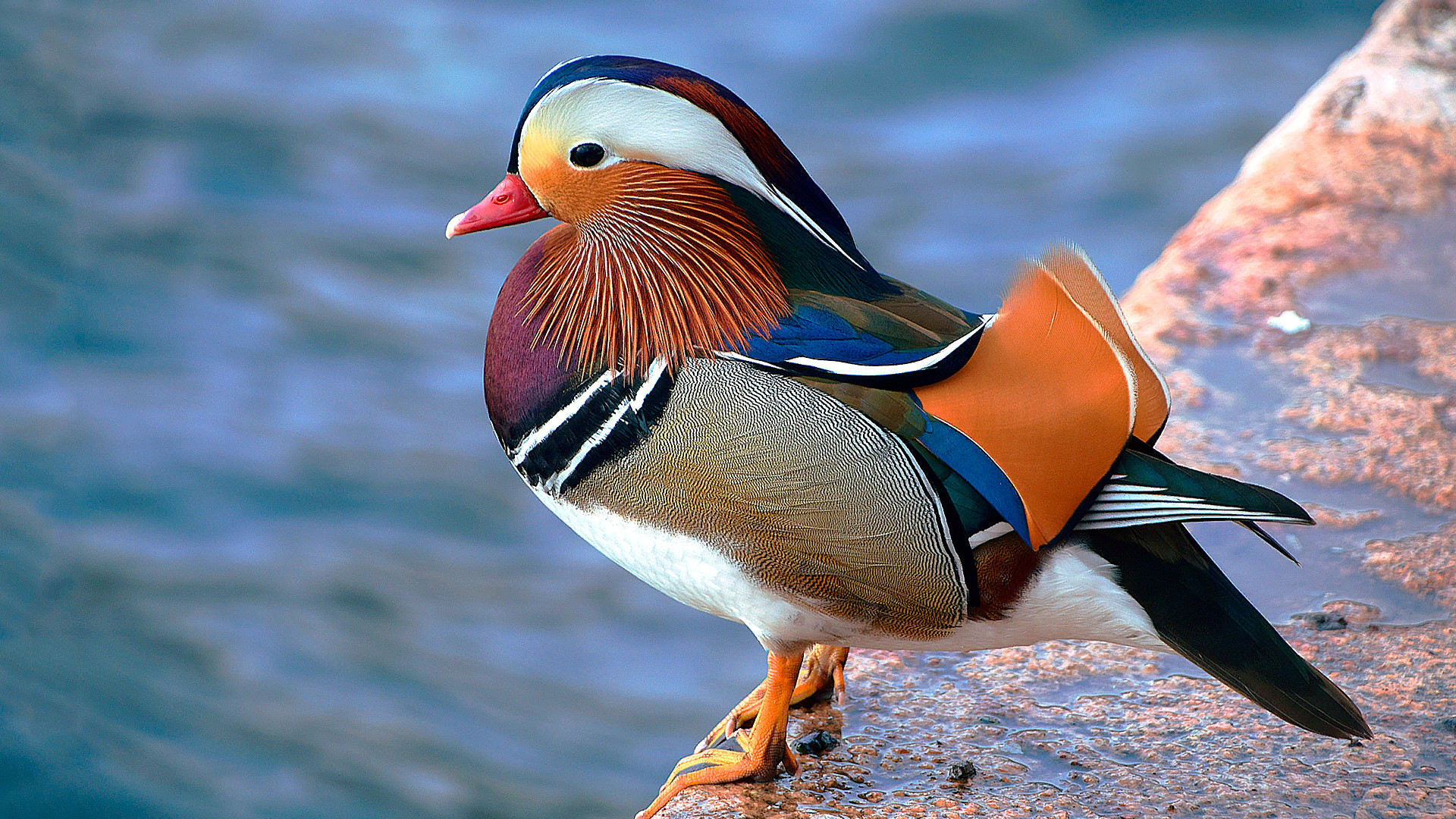 The mandarin duck isn’t a widespread species: it lives in China and Japan. In Russia, it inhabits the Far East, especially along the banks of the Amur River and the coast of the

Pacific Ocean. It also traditionally nests in the suburbs of Vladivostok (6,400 km east of Moscow). This duck is rare and endangered, but its number is growing.

These birds prefer calm waters and lakes located in mixed and leafy forests and can even settle near people’s lodgings. During the whole year, they have grey feathers like other ducks, but during a breeding period the male mandarins get bright coloration. They make nests in tree hollows and typically,  a female will lay 7-14 eggs. Mandarin ducks eat water plants, insects and other small water animals.

The species is endangered because many predators (not only different mammals, but owls, too) hunt them. Moreover, people shoot them as common ducks by mistake and for poaching.