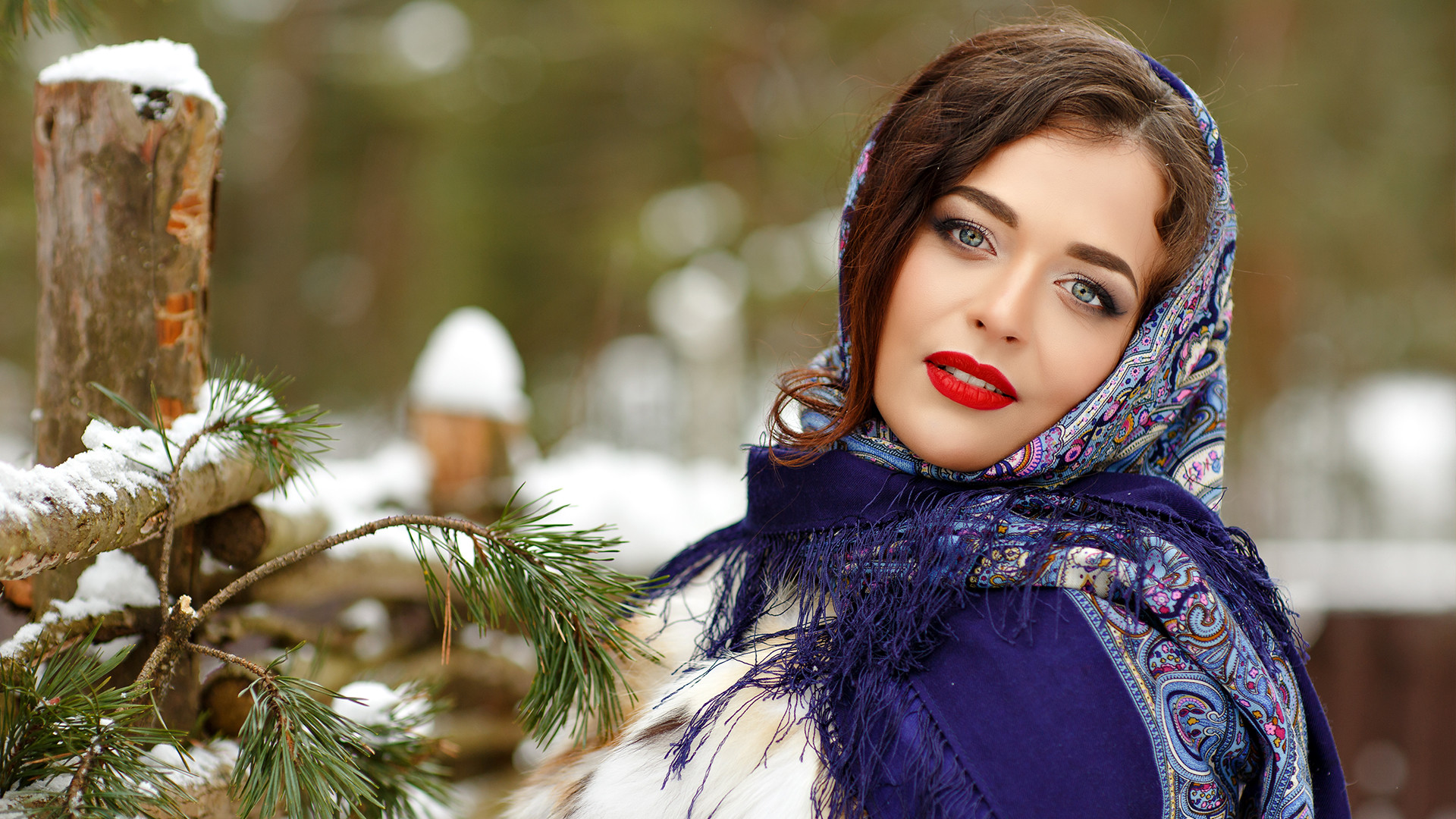 Legion Media
The headscarf has always figured prominently in traditional women’s clothing in Russia and remains a fashionable accessory today, especially in cold weather. Try out these Russian headscarves as an alternative to an ordinary hat.

The Russian headscarf is a bright and warm accessory that goes equally well with a classic outfit, an ethno or boho chic look, and that can be used to add a feminine flourish to sportier styles. Headscarves first arrived in Russia from the east in the 17th century and quickly became very popular among young women, who had previously worn embroidered linen scarves over a small hat. At the time, all women were expected to cover their hair in daily life, and only close relatives were allowed to see them without any headwear. Additionally, women were not allowed to enter a church without a headscarf. In winter, headscarves and shawls aso provided protection from both the cold and the wind. 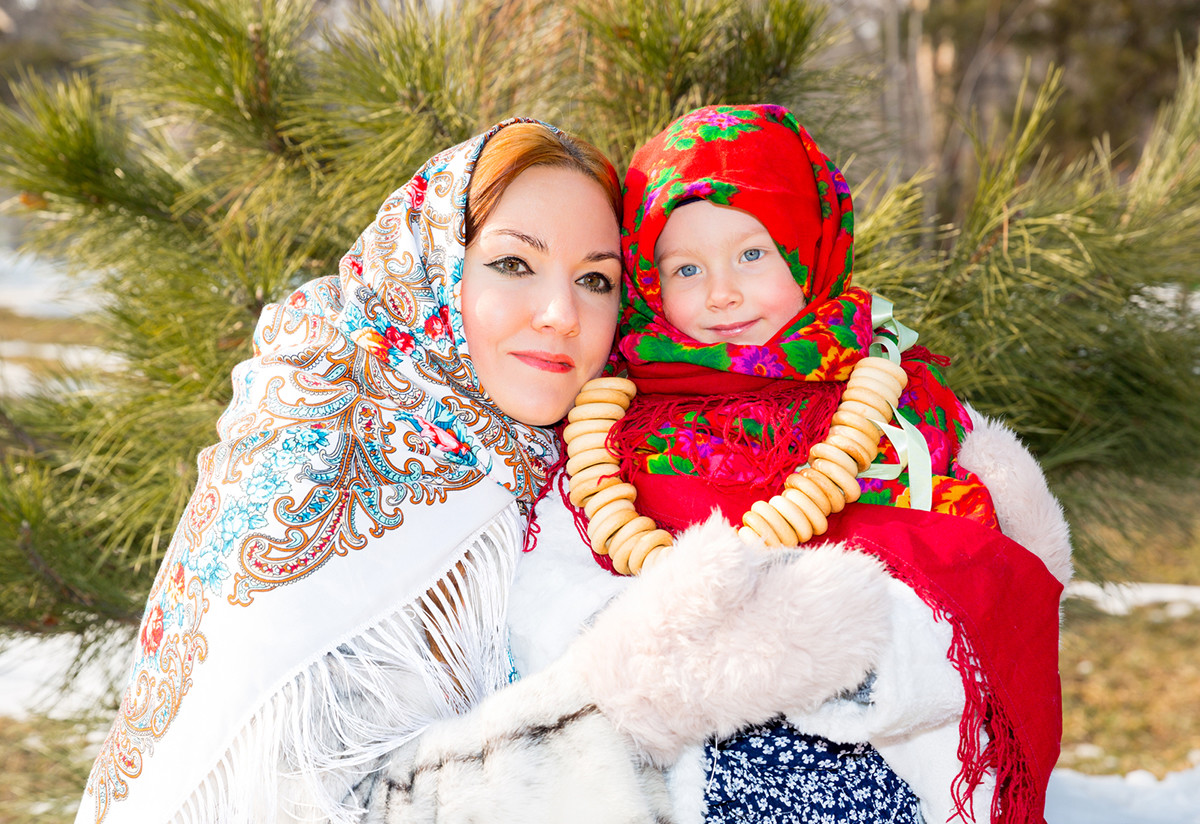 Here's the headscarf from Pavlovsky Posad.

Russian headscarves are usually made from natural fabrics supplemented with wool or silk and are painted with intricate patterns. These can be Turkish ornaments (paisley), floral designs or printed patterns. Since the late 18th century, the most recognizable traditional Russian headscarves have been produced in Pavlovsky Posad in the Moscow region, while the best-known winter headscarves knitted from down are made in Orenburg. 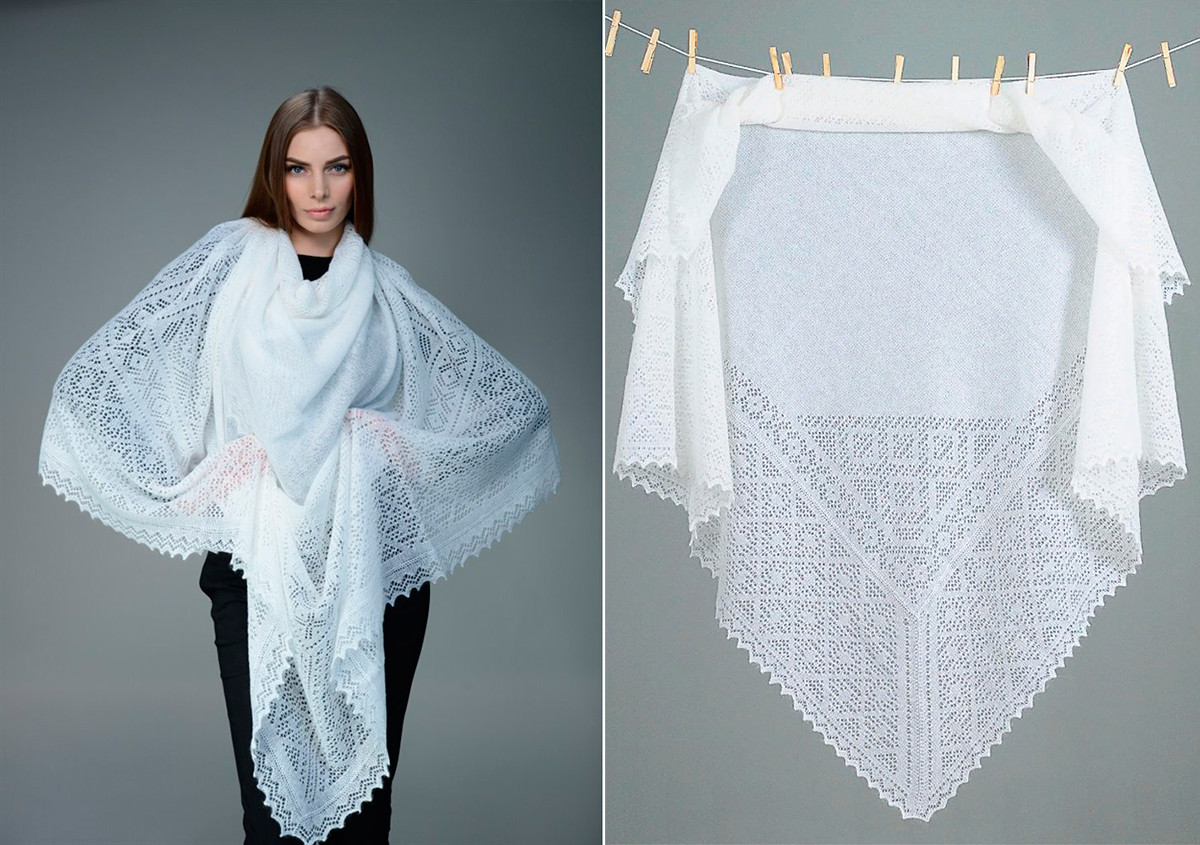 A shawl made in Orenburg.

Women used to wear headscarves differently in different parts of Russia. What’s more, a woman’s way of wearing a headscarf differed depending on her marital status and the occasion, be it going to church, a festive celebration, etc. Some of those styles appeal to fashionistas even today.

1. Tied under the chin 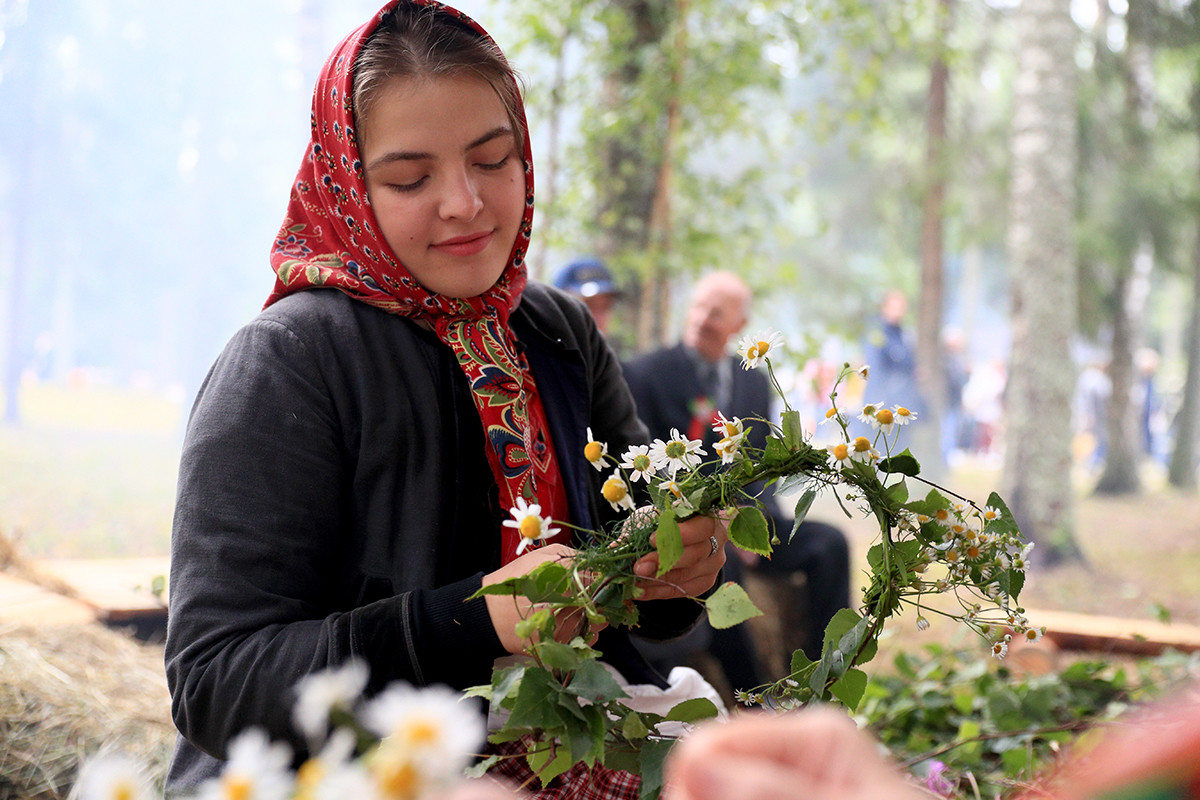 A headscarf tied under the chin, as famously worn by the girl on the Alenka chocolate bar, is usually worn by young women. This way of wearing a headscarf works best with scarves made from thin fabrics worn in spring or autumn—it would be way too cold for this style in the winter, although it would protect your head some from the wind. Historians believe that this way of wearing headscarves came from Germany but became so “Russified” that is now considered to be traditionally Russian. In Soviet times, a headscarf tied under the chin was actually part of the standard uniform for women working in factories and on collective farms since health and safety rules required that hair be covered. Headscarves worn that way also protected the neck from the wind. This way of wearing a headscarf is ideal for any hairstyle with braids.

2. Tails to the back 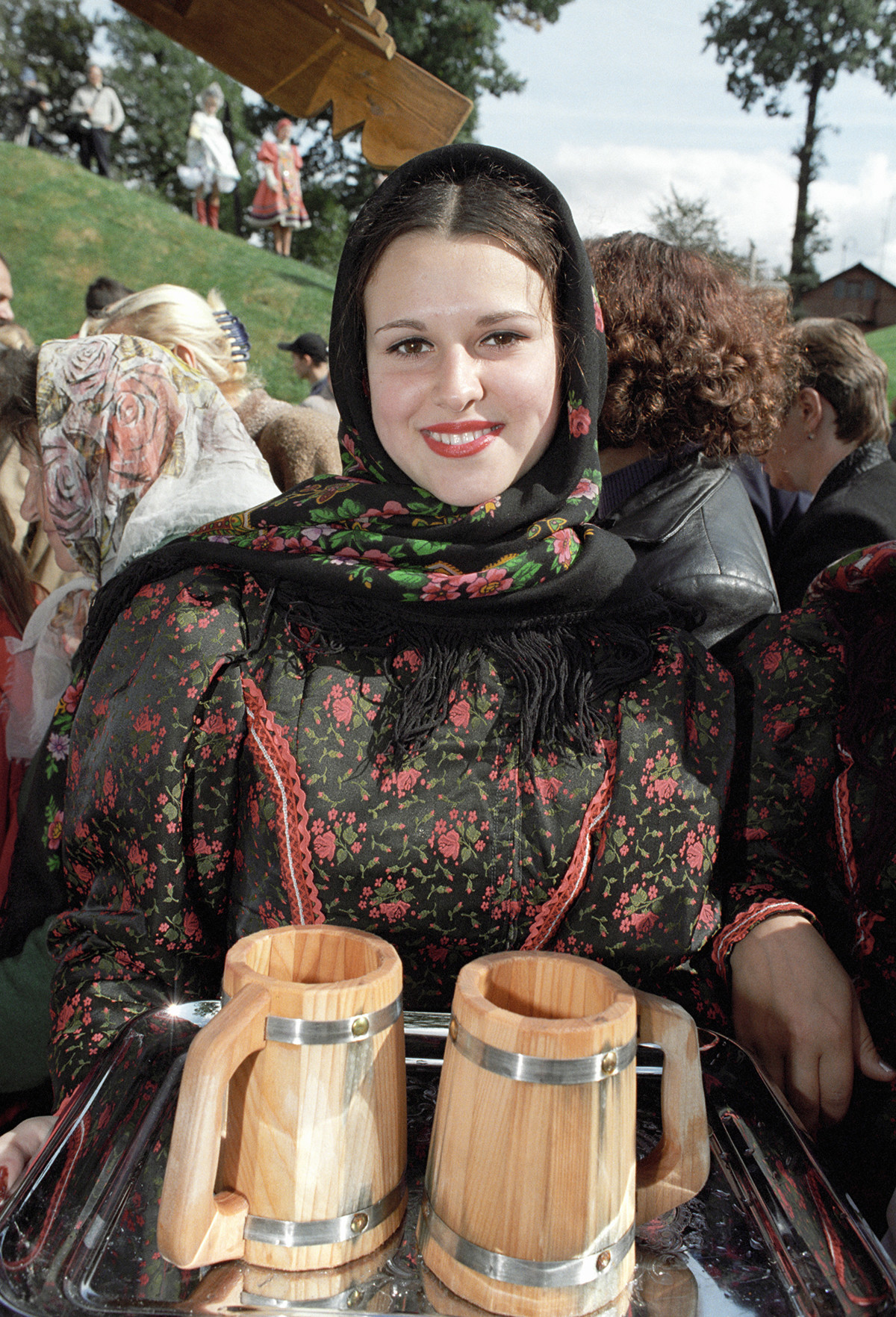 This way of wearing a headscarf, popularly known as “over the shoulder,” was popular among women living in cities in the 17th century. Here, the scarf is put over the head, while its ends are not tied in a knot but are simply crossed and thrown back to fix the headdress.

3. Tied around the neck 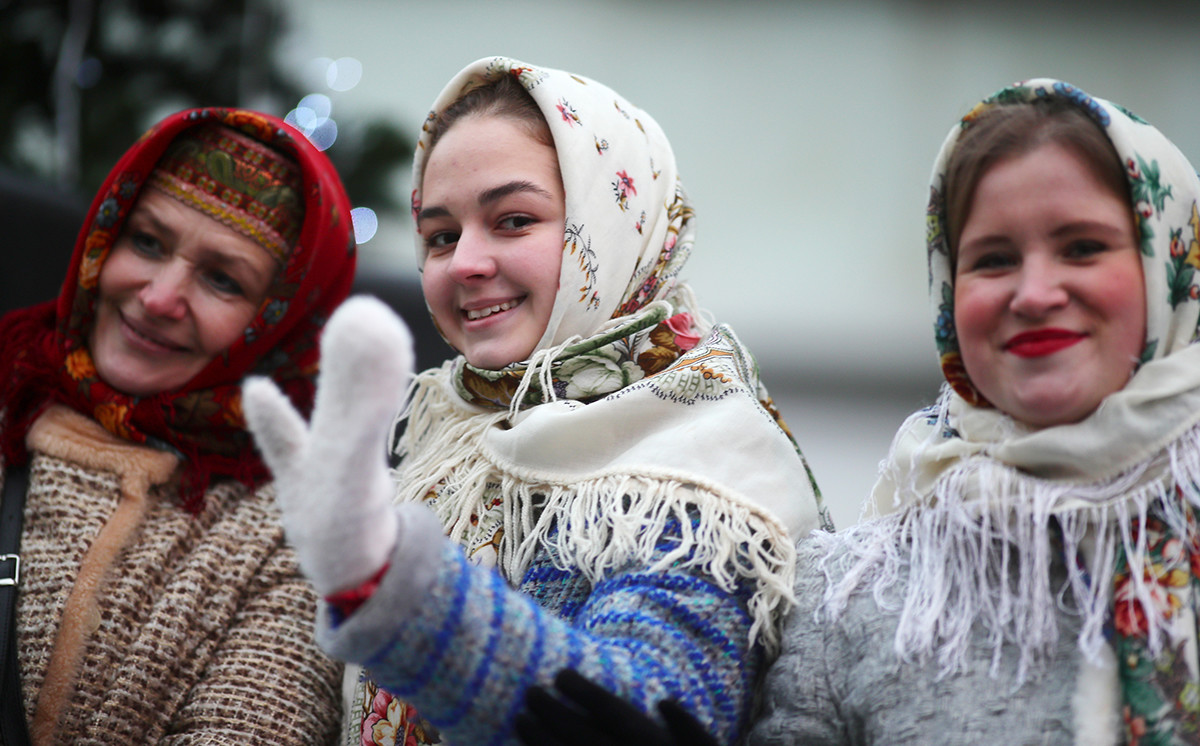 Previously, this was how married women wore their headscarves to indicate their marital status. These days, it is one of the most popular ways of wearing a headscarf with fur or sheepskin coats in the winter. The scarf is placed on the head, its ends crossed under the chin, tied around the necks and tucked under the collar.

Many young women wear headscarves this way on top of a woolen hat for extra protection from the cold and the wind. 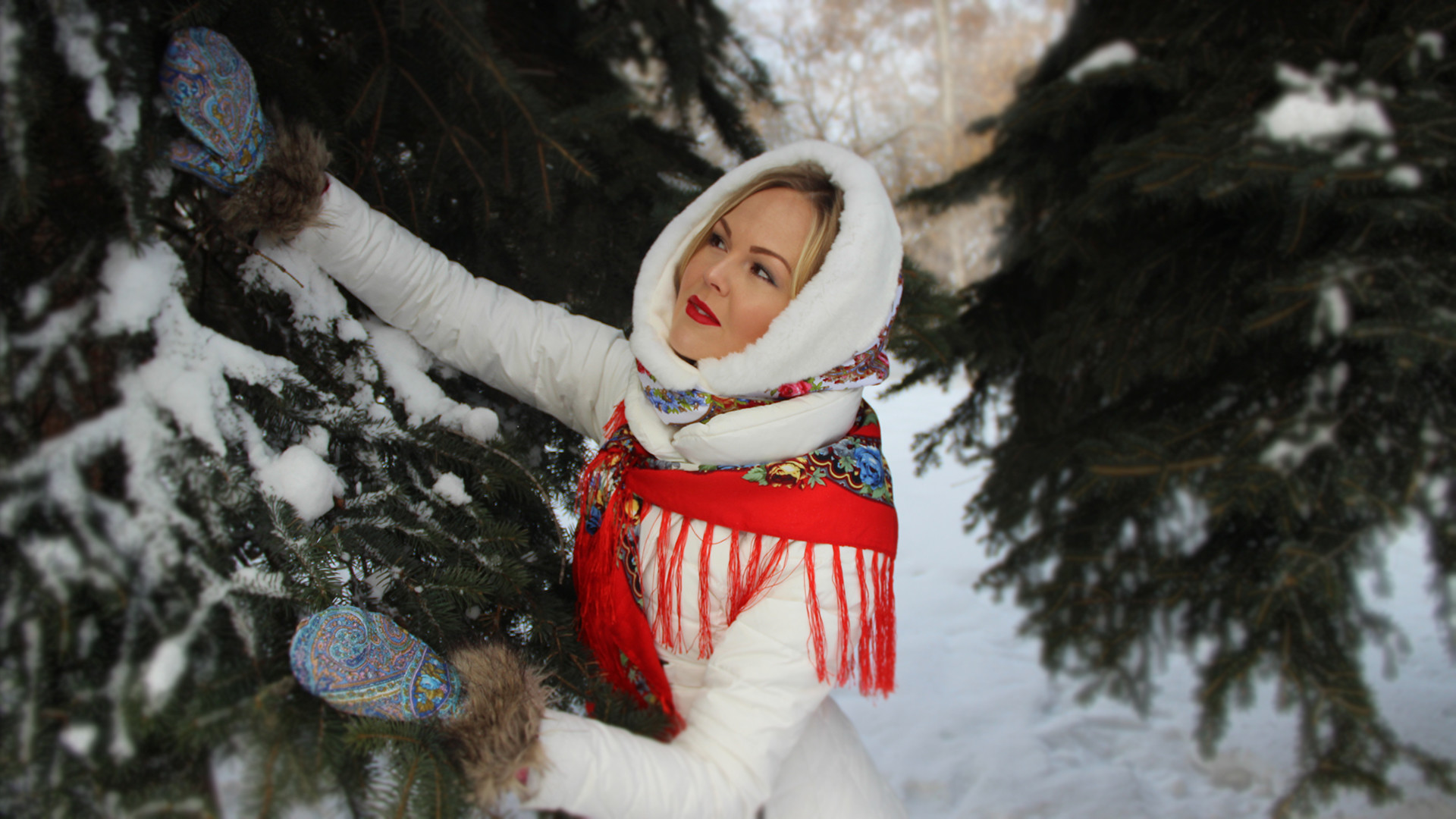 This is how young women usually wear a headscarf to church without tying it too hard.

Do you know Boris Kustodiev's painting "The Merchant's Wife at Tea?" 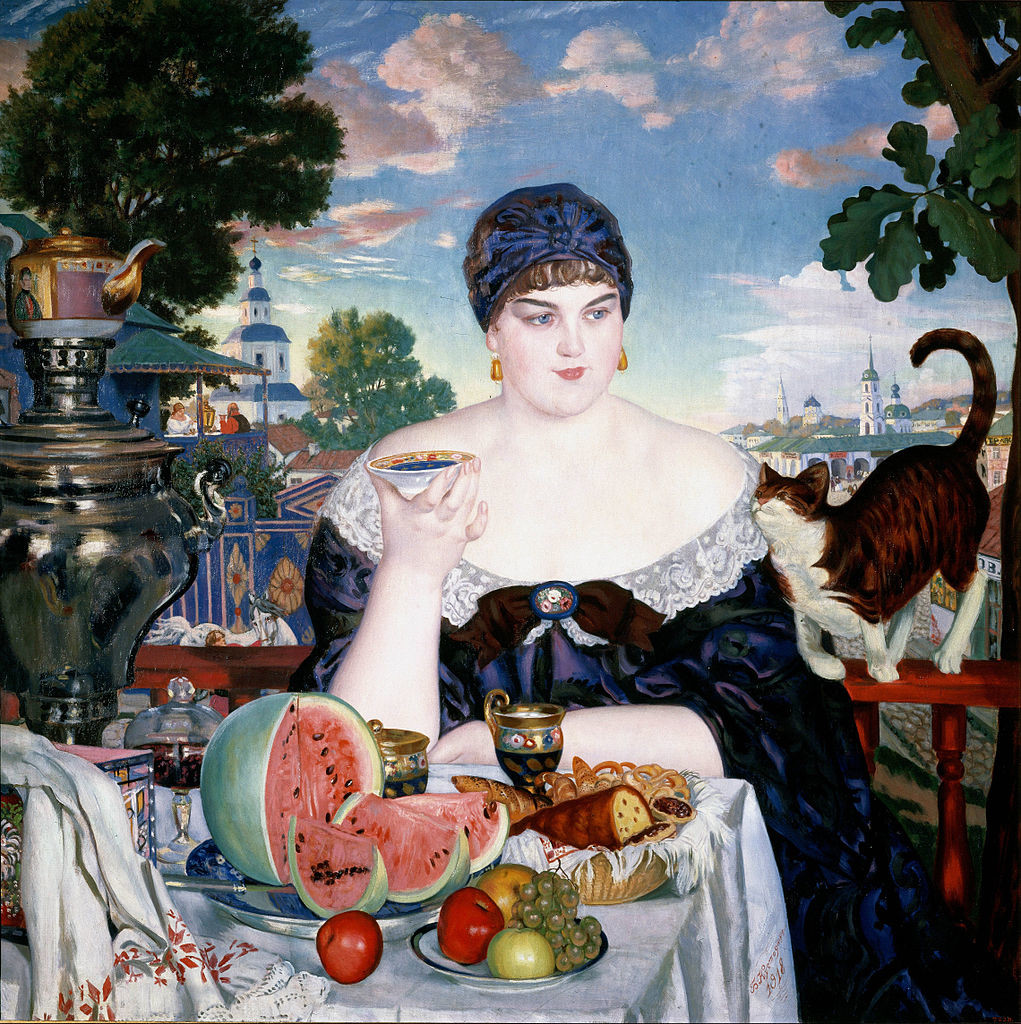 Check out how this Russian beauty has tied her headscarf: The ends are tucked into a neat bun in the front and raised up, and the knot looks like flower petals. This is how women belonging to the merchant class wore their headscarves, so it is not surprising that this style was known as "the merchant’s way." 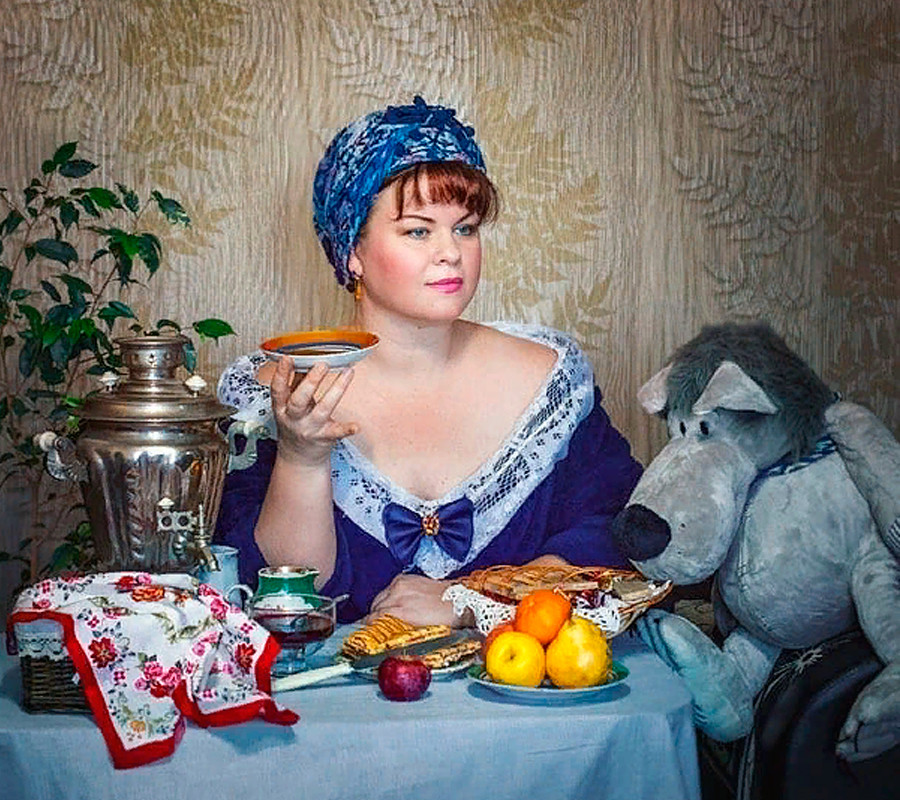 These days, a headpiece like this will go well with a pin-up and a sport-chic look while protecting the wearer's head from the bright sun outdoors. 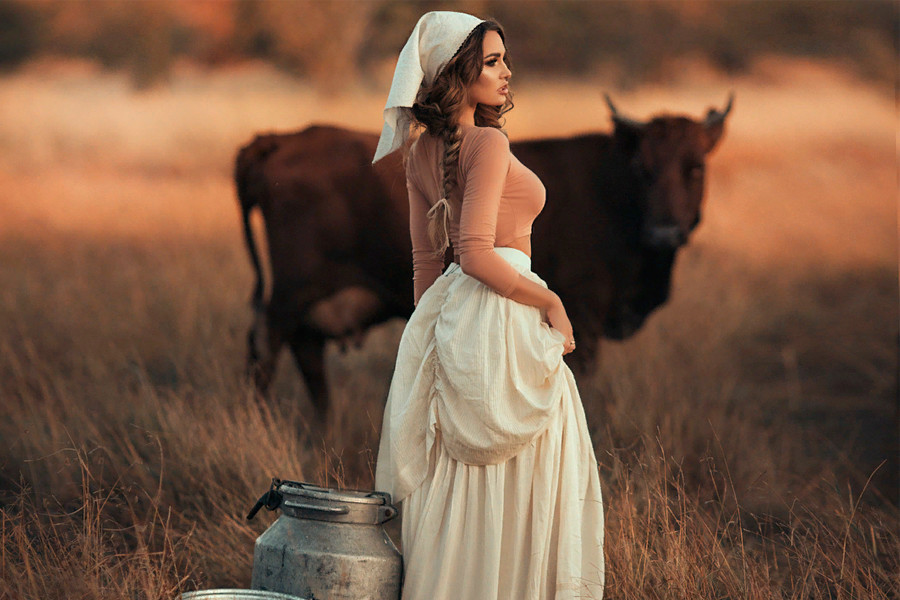 This way of wearing a headscarf is considered traditional for women in the southern parts of Russia. It particularly suits high and sleek hairstyles.