How a city lives with HUGE hole in the ground (PHOTOS) 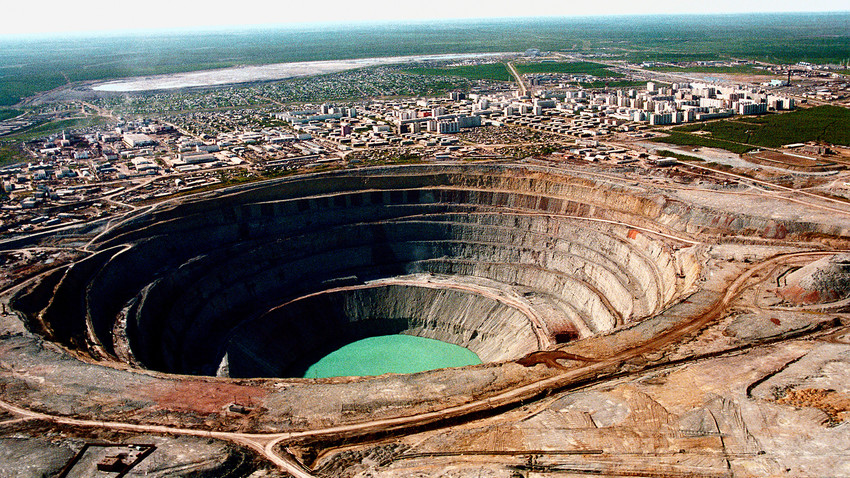 Sergey Subbotin/Sputnik
The city of Mirny has just one attraction - an incredible hole in the ground, which can be seen from space.

Possibly the most famous hole in Russia, this moderately sized pit freaked some Reddit users out, leading to thousands of bewildered comments, such as: “Love the airport that just ends at the mine. Overshoot your runway a bit? Yeah, that’s the end of your vacation.”

On the edge of the mind-boggling quarry there indeed sits a city - Mirny. It’s situated in the biggest and most barren region of the country - Yakutia (or Sakha Republic, as you may also know it), a huge landmass that occupies a fifth of the country’s territory, but is inhabited by less than a million people. The city of Mirny itself has 35,000 inhabitants and they’re there mainly for one reason: diamonds. In fact, they’re why the city was built in the first place. 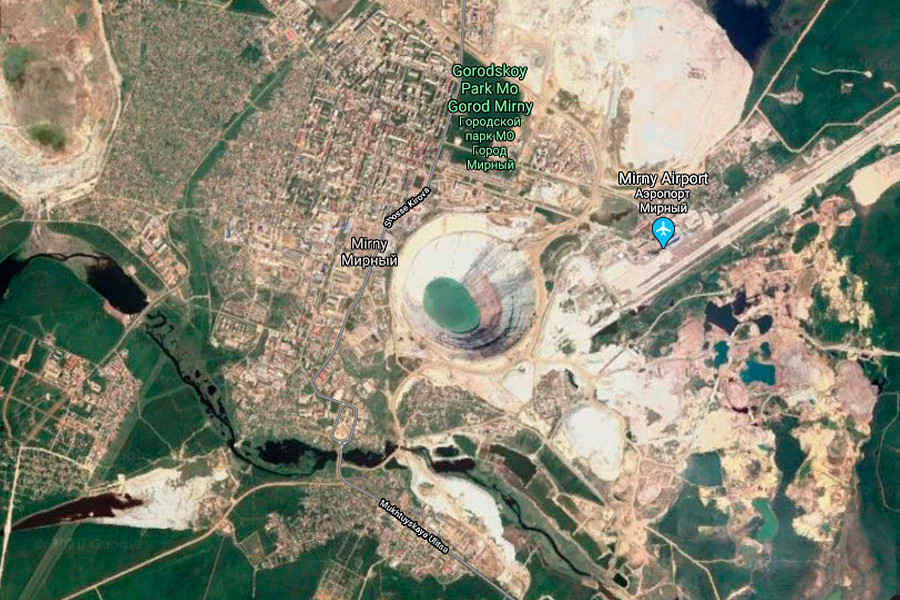 The ‘Mir’ (Peace) quarry boasts one of the richest diamond deposits in the world. At 525 meters in depth and 1,2 kilometers in diameter, this man-made void is truly mind-blowing.

They say that a fox helped people discover diamonds there. It dug up a hole under a tree whose roots were sticking out as a result of a landslide. In June 1955, geologists looking for kimberlite (a type of diamond) noticed the strange shade of the earth dug up by the fox. Testing revealed that kimberlite was indeed present. 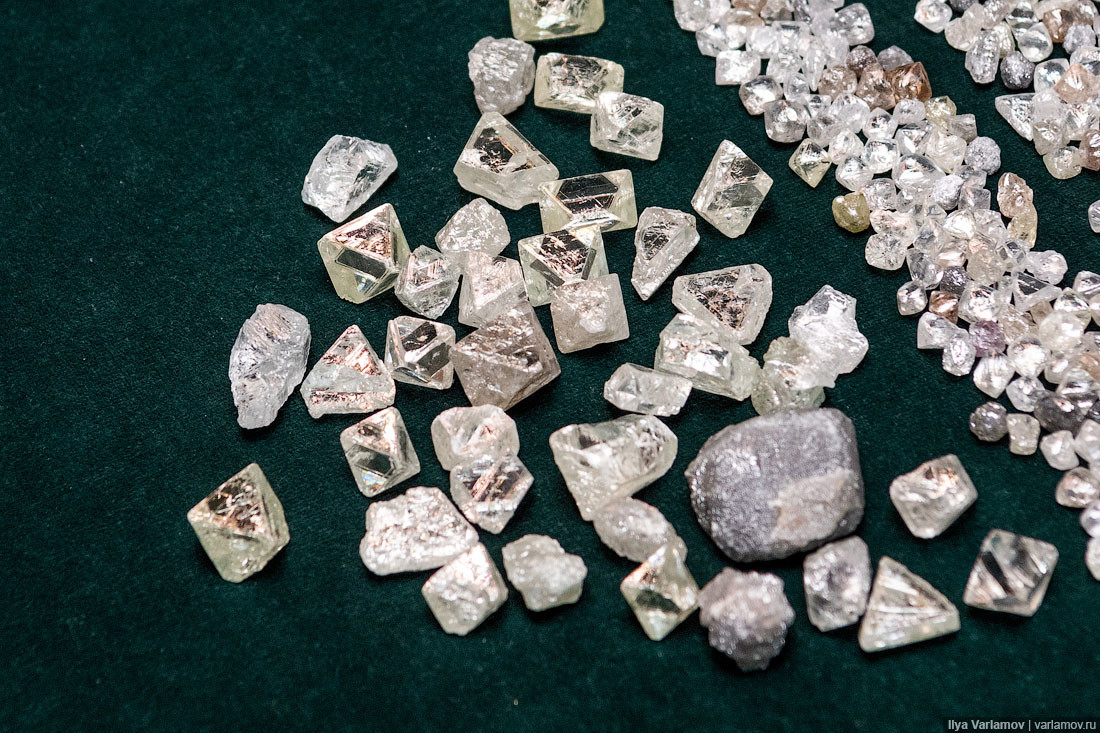 The same year a settlement appeared, and in several years, it received the status of city. Equipment had had to be dragged all the way across 3,000 kilometres of inhospitable terrain. In the first 10-12 years, Mirny’s population grew fourfold.

It took more than 50 years to dig out a quarry of such immense proportions. From 1957 to the late 1990s, some $17 billion in diamonds is estimated to have been found here. The spiral that takes a truck from the bottom of the quarry back to the top lasts a whopping eight kilometers. 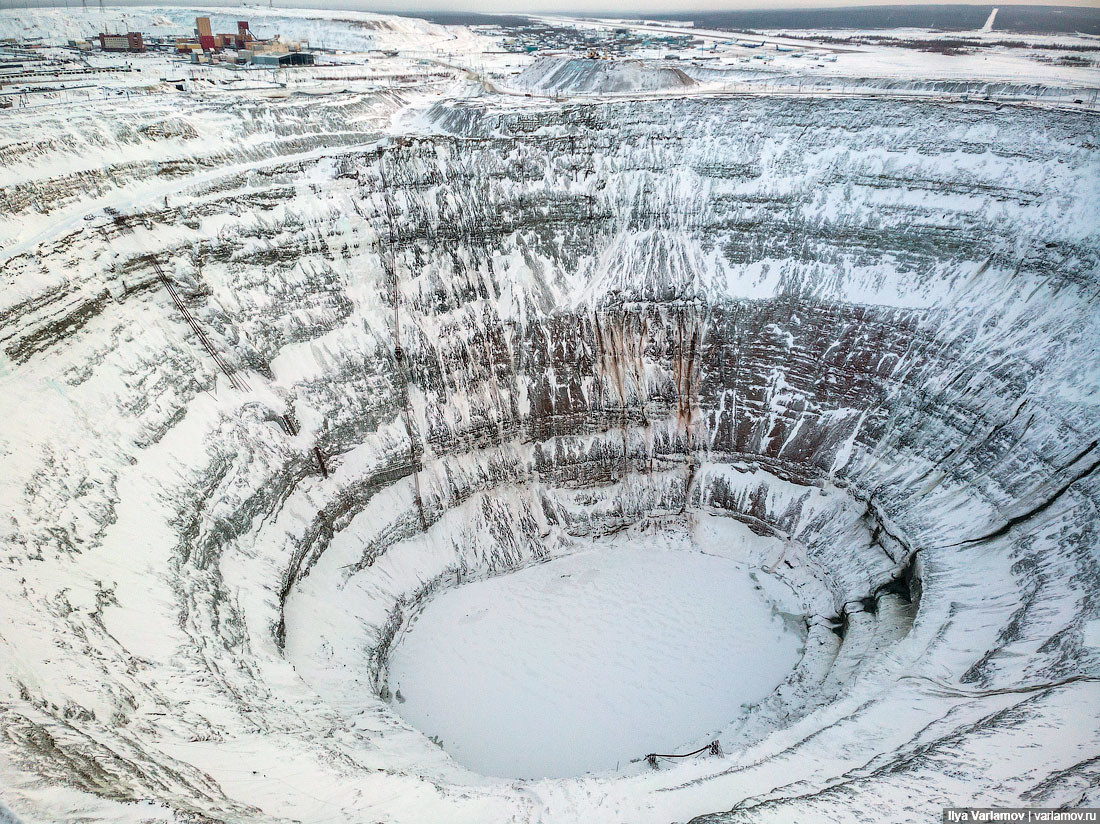 The quarry belongs to the ‘Alrosa’ diamond mining company (in 2018, it was accountable for around 26 percent of the world’s extraction). Mirny is a classic ‘monocity’, most of whose inhabitants are in some way tied to diamond mining. But the so-called diamond capital of Russia doesn’t strike one as a flourishing city at all. Living there, according to the locals, is a real challenge. Especially after the mine was shut down. 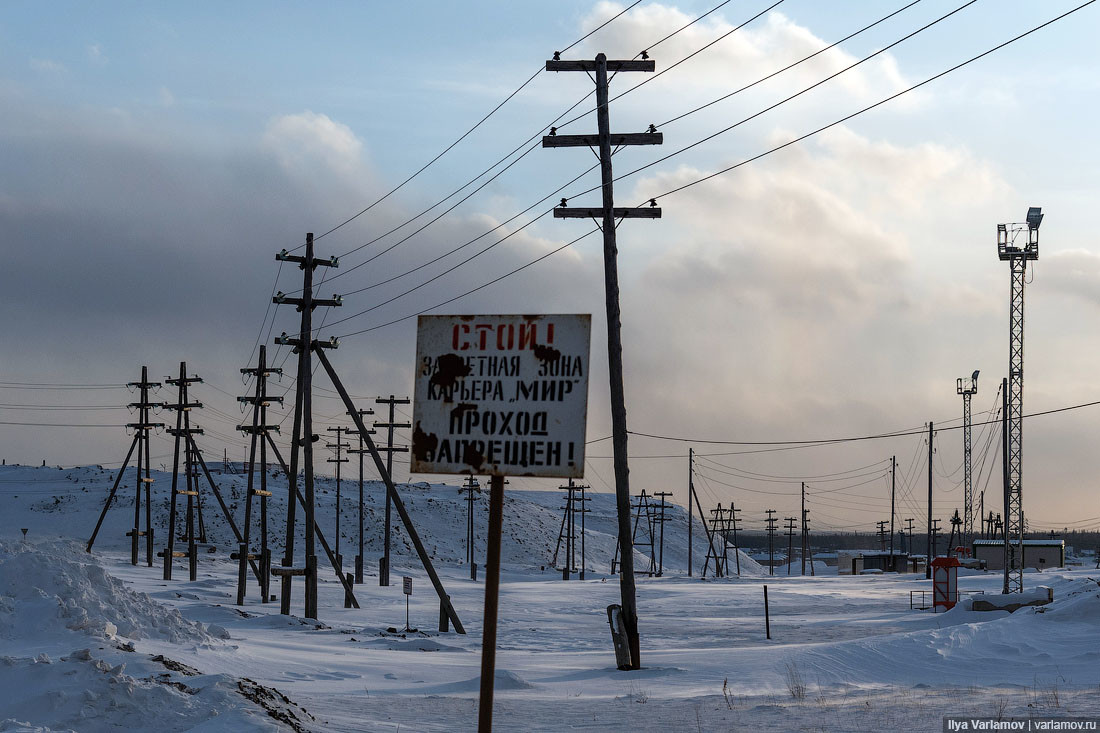 It happened in 2017 after a tragedy struck. Water that had been gathering at the bottom of the pit for some time flooded the mine with the people inside. By then, development had already begun underground, with the quarry having grown too big for surface extraction. There were 151 people inside the mine at the time of the incident. Most were safely extracted, but eight were pronounced dead, having never been found.

Life on the edge 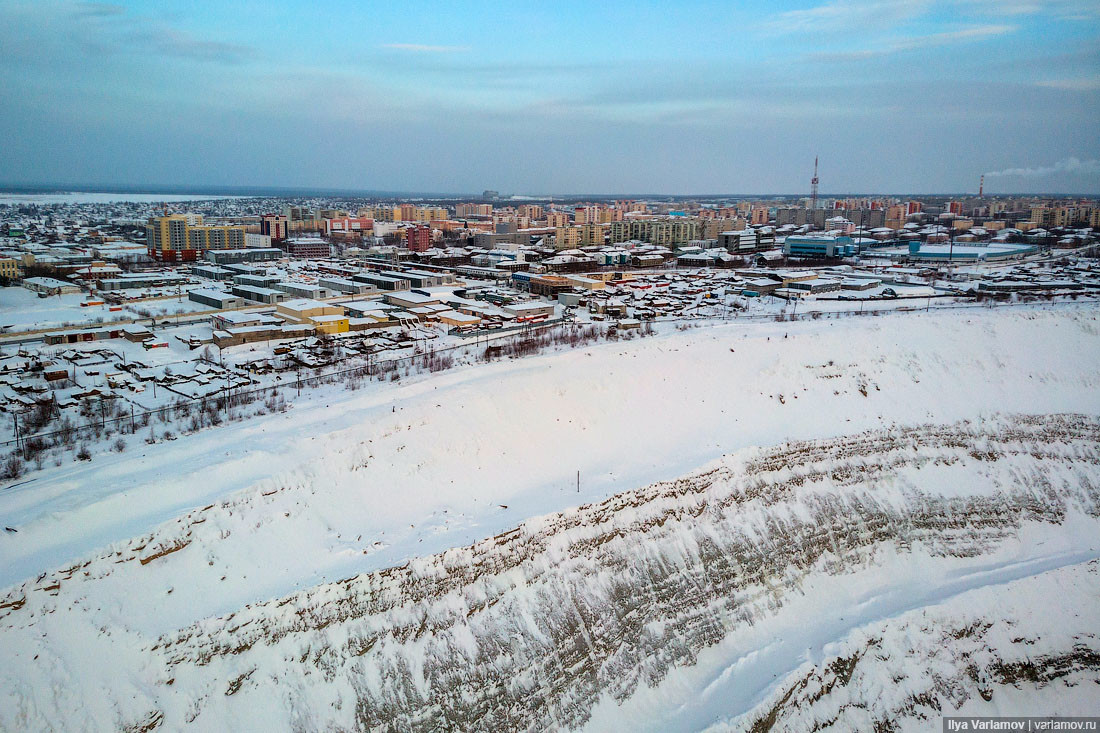 The first thing that strikes you in Mirny is just how close the city is to the quarry. In certain photos, it seems that the houses are standing right at the edge. But fears of a landslide - or of the entire city being sucked up by the pit - seem to be the last thing on people’s minds. “Life near the quarry isn’t all that difficult, it’s just that the photo makes it look particularly striking from this angle,” one local said. 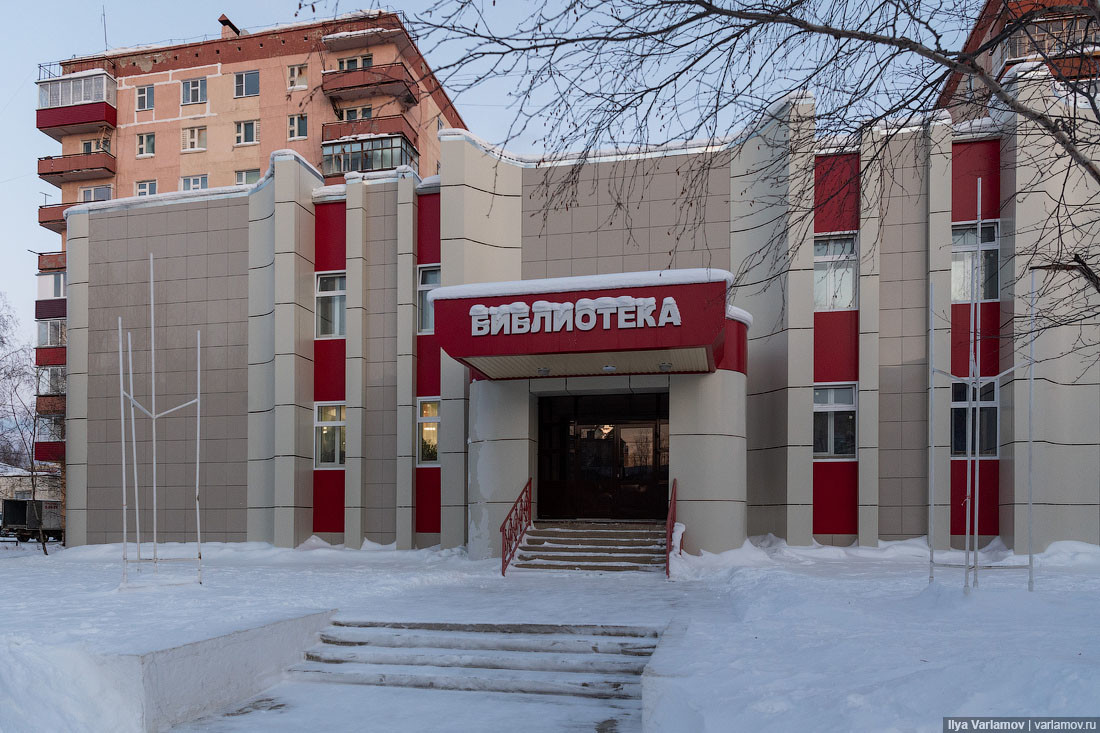 There are widespread rumors online that the Mir mine keeps sucking in helicopters using air gusts. “I dare say that this is not true,” says Anna, a resident of 20 years. Helicopters and planes do indeed traverse the airspace above the gigantic pit; however, no crashes of the sort have ever taken place. Meanwhile, the airport sits right next to an unpaved road. “On the right, you’ll see the quarry,” the pilot always announces, knowing that it’s the city’s biggest and only attraction. Moscow, St. Petersburg and a few other major cities have regular direct flights to Mirny, despite the fact that you’re extremely unlikely to spot a tourist there. 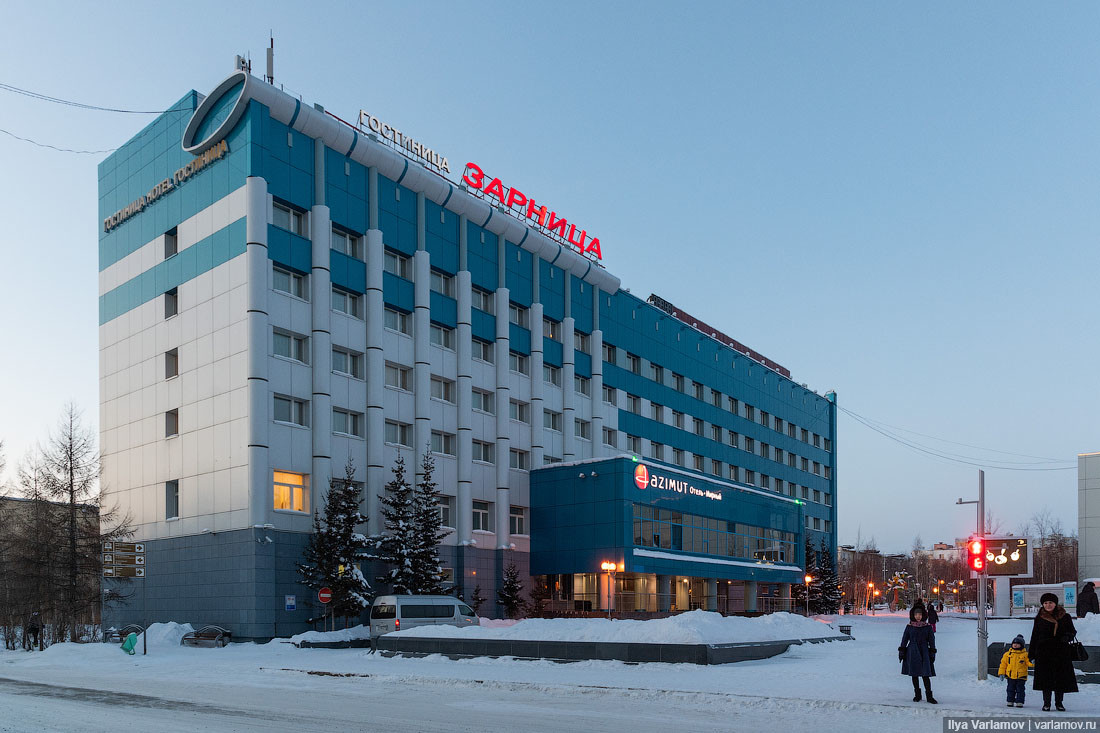 People came to Mirny for shift work, as is customary in the Far North, where temperatures can drop to 55-60 degrees Celsius. Most houses are perched atop piles of soil. Regular foundation-based construction would have messed with the permafrost underneath, and the houses would simply have sunk due to soil erosion. As with other northern cities, it’s fashionable to paint them in bright colors - apparently, this helps with treating depression brought on by long winters.

“In summer, Mirny boasts real white nights. But in winter it gets dark really early, at four in the afternoon. In the morning, the sun doesn’t rise until 11. This is somewhat disconcerting,” local resident Aleksandra says.

People here are well adapted to long cold winters - they’ve even managed to slip-proof the stairs everywhere. In every public facility - be it a church, hospital or a hotel, the stairs are always covered in Yakut-made carpeting. “Why? Because all the stairs are made with slippery tiles, normally used for interior decoration. We’re having to carpet it to prevent folks from getting injured,” blogger Ilya Varlamov wrote after a visit to Mirny. 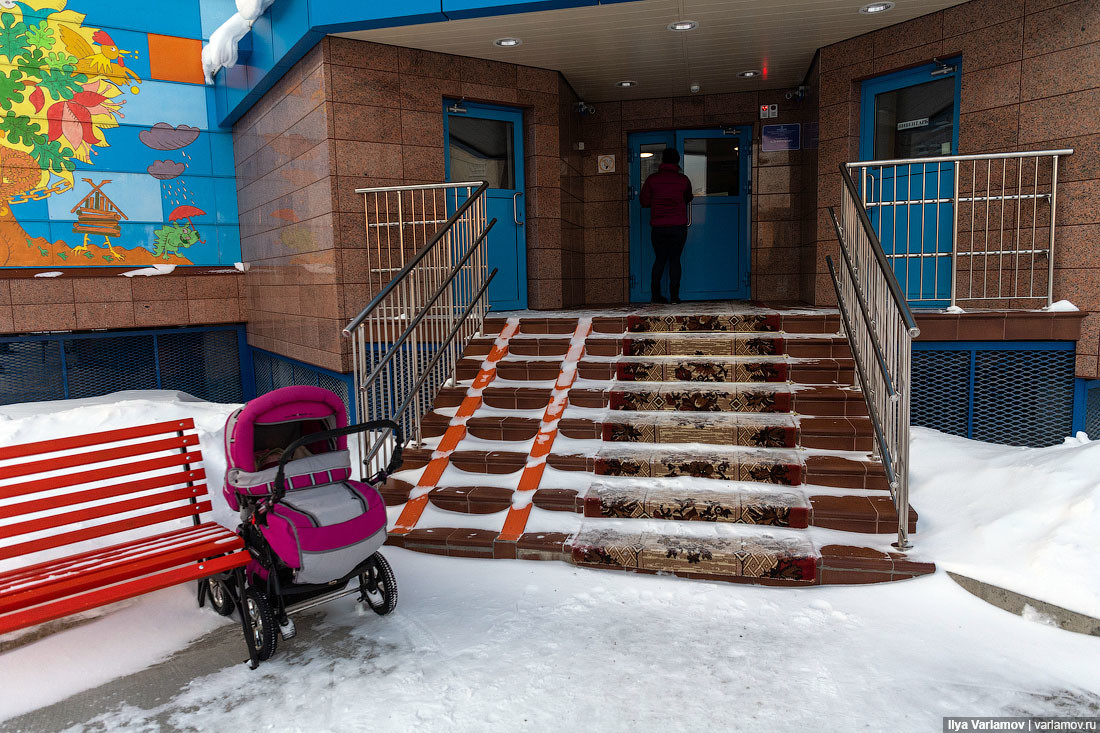 In reality, the problem of slippery tiles in winter isn’t unique to Mirny; Russians usually tackle this by using sand, salt and/or special chemicals. In Mirny, however, it’s carpets all the way. 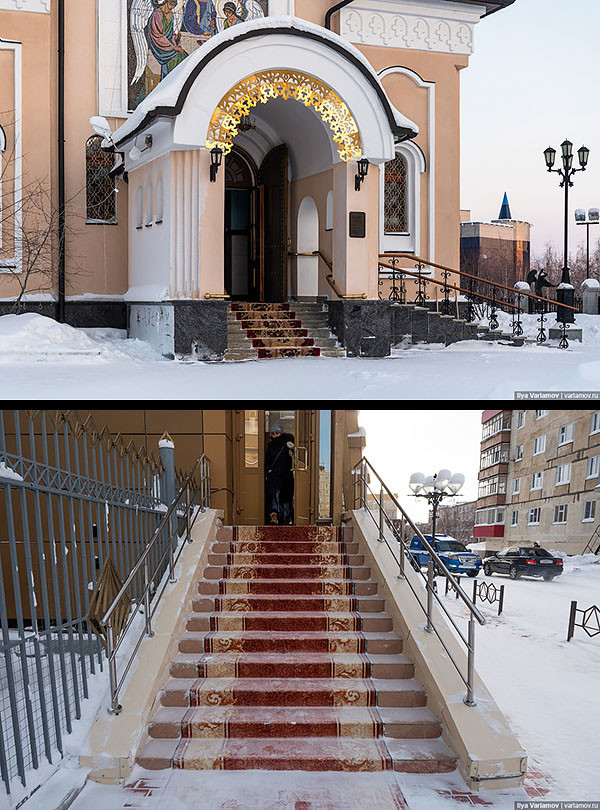 The city has two movie theaters in town, a stadium, a theater, a botanical garden, several restaurants, a hookah bar and the only hotel in town - owned by the ‘Azimut’ chain. A room will cost you 8-10,000 rubles (approx. $104-130) per night, which is about the same price as a comfortable Moscow hotel. And there are Land Rovers and Land Cruisers everywhere on the streets. 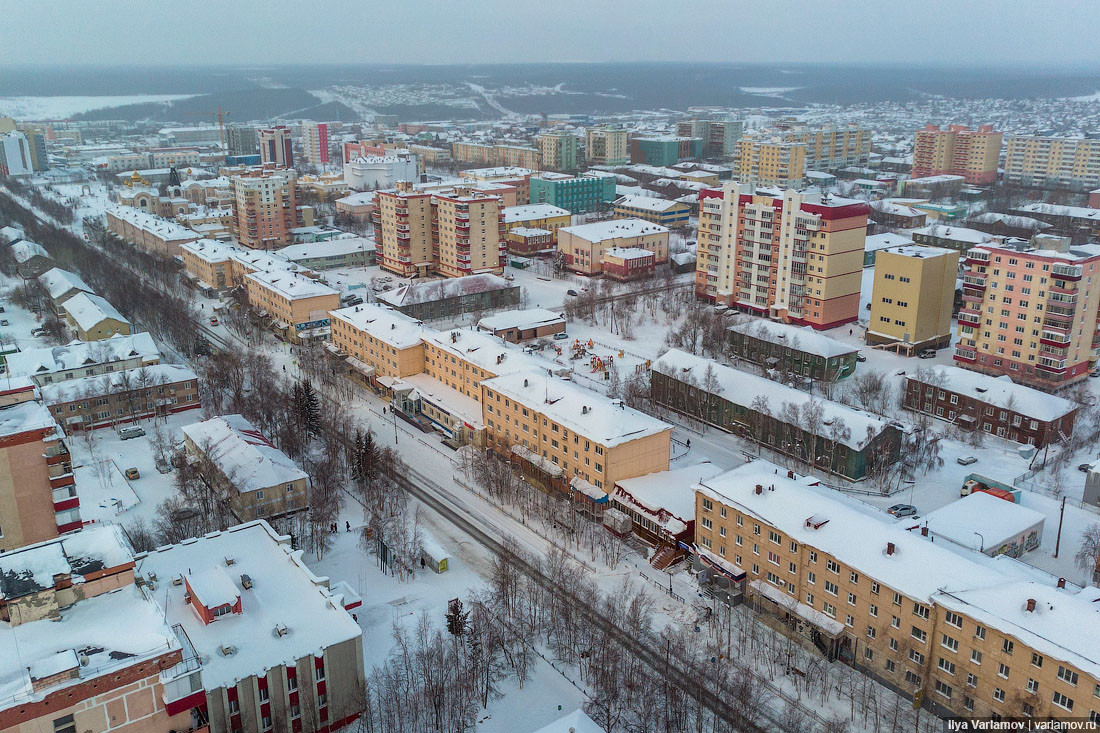 “Groceries cost twice as much as on the mainland [Far North people use that word for anything north of the Urals]. This is explained by Mirny’s location in a hard-to-reach zone, with produce being delivered from Novosibirsk, Krasnoyarsk, Irkutsk, through Ust-Kut and, in summer, through Yakutsk and all using this screwed up unpaved road,” a local said in an online forum. 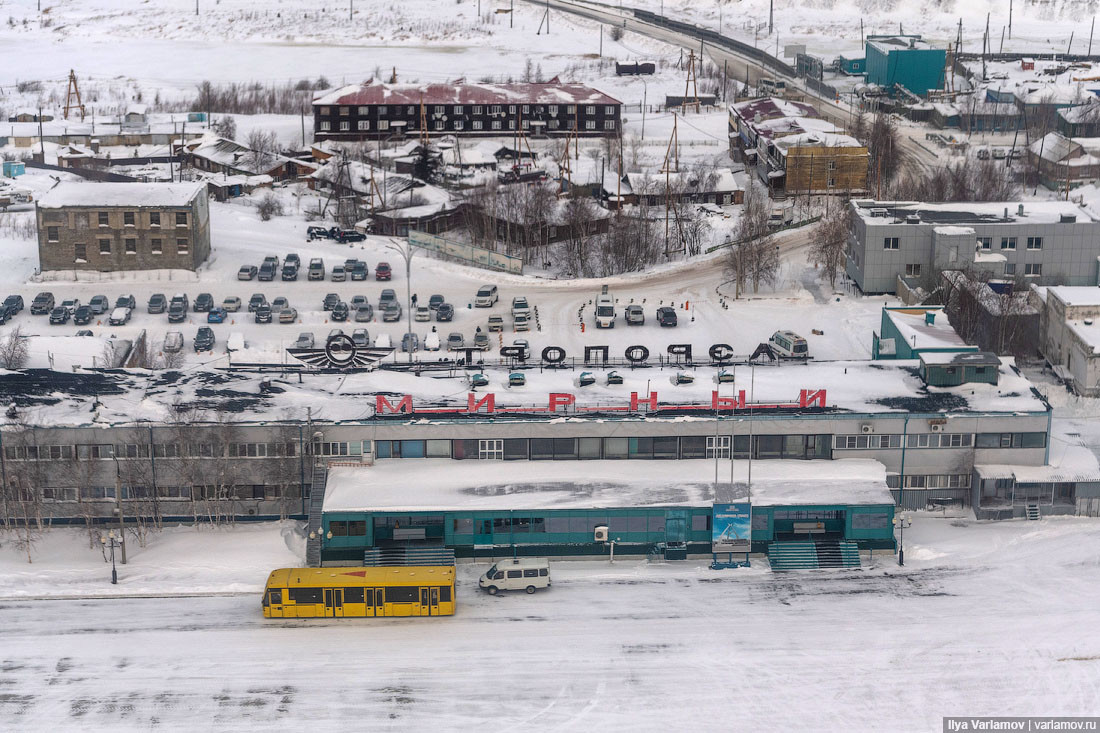 Locals find solace in the fact that, overall, the city is quite “green, with good ecology”, while the salaries paid at ‘Alrosa’ are enough to live on, the city is very safe, with almost no crime and, of course, the fact that there’s a gigantic surreal hole in the ground, almost like “the Grand Canyon”. The only discomfort sometimes experienced by locals is the smell of rotten eggs, which is the result of hydrogen sulfide.

What will happen to the quarry?

After the mine was shut down, there weren’t any plans for it for a long time. There was even an eco-city project online, which proposed a dome with its own biosphere for 100,000 people - living in the pit itself, of course. The idea was put forth by Russian architectural firm ‘Ab Elis’. 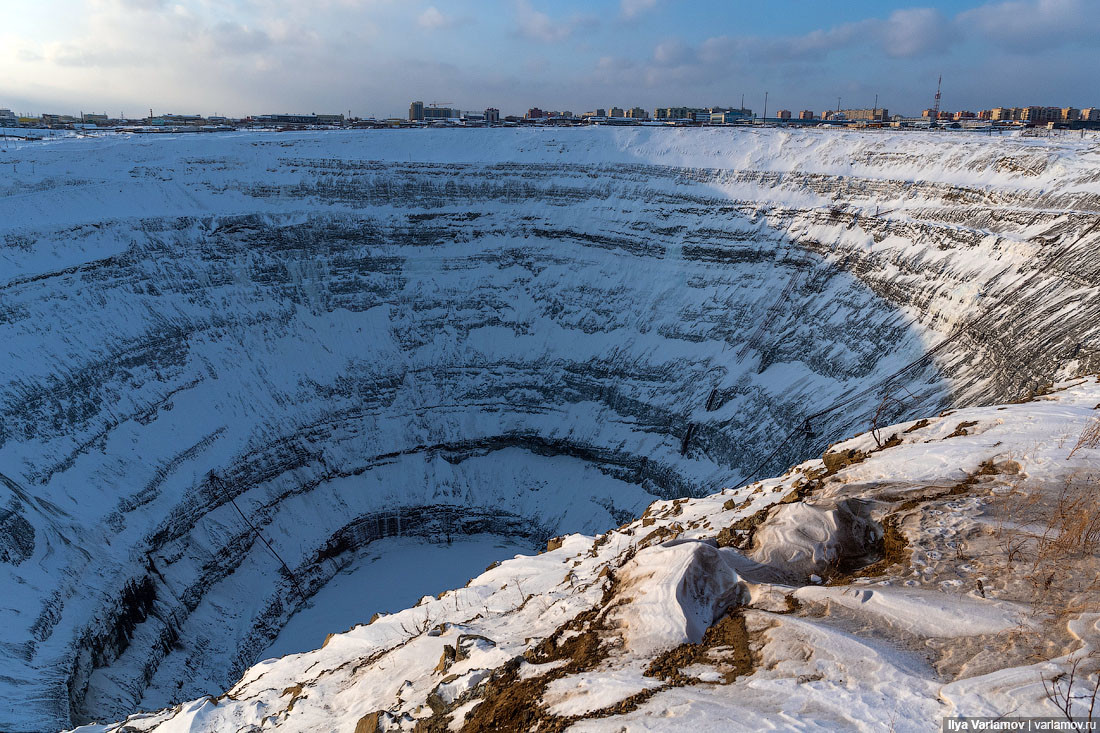 However, Yakutians never seriously discussed what appeared to be a PR stunt. Mir’s future is, likely, more prosaic.

In january 2020, it turned out that the mine might have another lease on life: Alrosa began geological exploration. It will cost the company two billion rubles (approx. $26 mln) and answer the question of whether it’s financially feasible to restart the mine.

“If the research supports the economic viability and safety of continuing extraction at Mir, reconstruction of the mine would begin in 2024 and last six to eight years,” Vedomosti newspaper reports.