What’s behind the recent ecological disaster in Kamchatka? 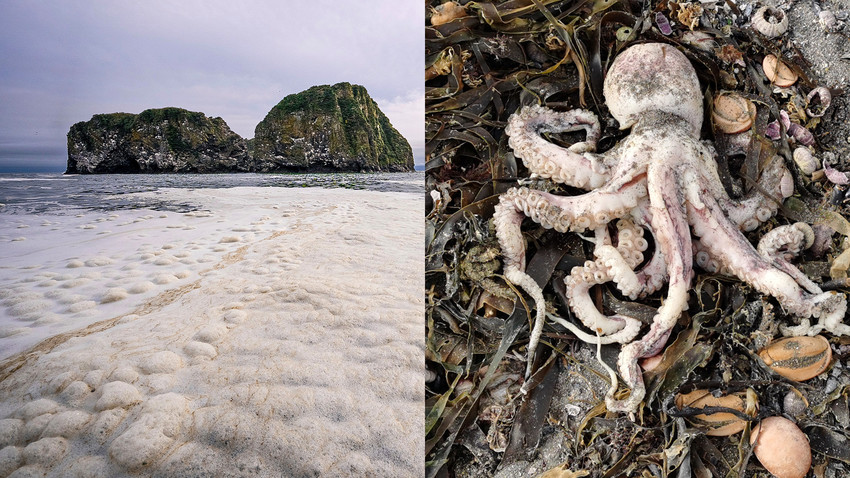 Greenpeace/AFP; Anna Strelchenko/TASS
Kamchatka, Russia’s easternmost region, has been hit by an ecological catastrophe. Photos of lifeless marine animals strewn along the Pacific coast have been posted on social networks, and local surfers complain of nausea and eye cornea burns.

In mid-September, Kamchatka surfer Anton Morozov started experiencing strange symptoms: dry, blurred, painful, and filmy eyes, plus sore throat and swollen ligaments. Morozov had been to a surfer camp on Khalaktyrsky beach — Kamchatka’s “calling card” — many times before, but he had never known anything like this. The ocean also tasted “really weird.” Bitter, not salty. “After a while, all 20 of us at the camp got poisoned. We decided it was an intestinal infection. It was unparalleled,” said Anton.

At the time, the surfers thought it was a reaction to plankton or some other biological process in the ocean. Everyone was waiting for a storm, and hoping it would clear everything. But the storm came on Sept. 29, and the situation only deteriorated. What’s more, social network users began posting videos and photos of different parts of the Kamchatka coast showing hundreds of dead sea animals and mollusks, plus several large and rare octopuses and even one seal. 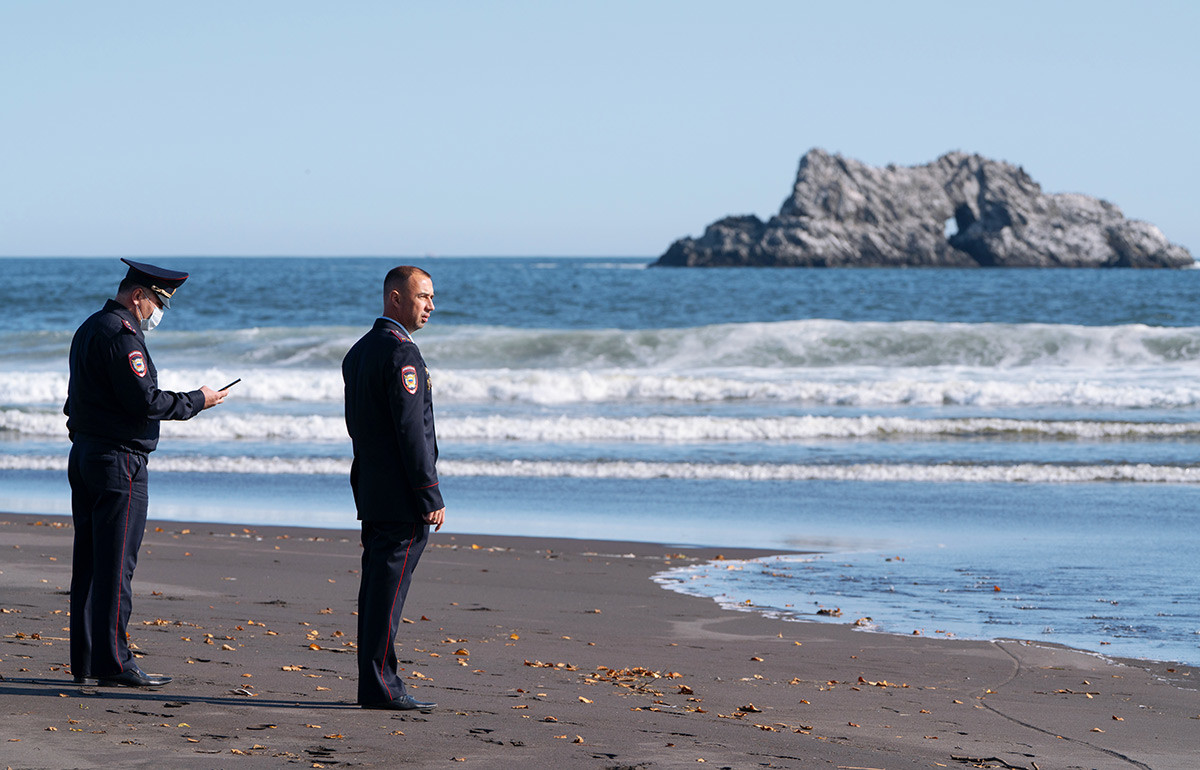 According to Morozov, in recent days the water has become even stranger — thicker and cloudier, and even people who had no contact with the water have developed symptoms.

On the same day as the storm, local authorities dispatched a team of specialists to take samples, which indicated that the water contained twice the maximum allowable amount of phenol and four times that of oil products. However, this was not enough to determine the reason for the leak and its source. 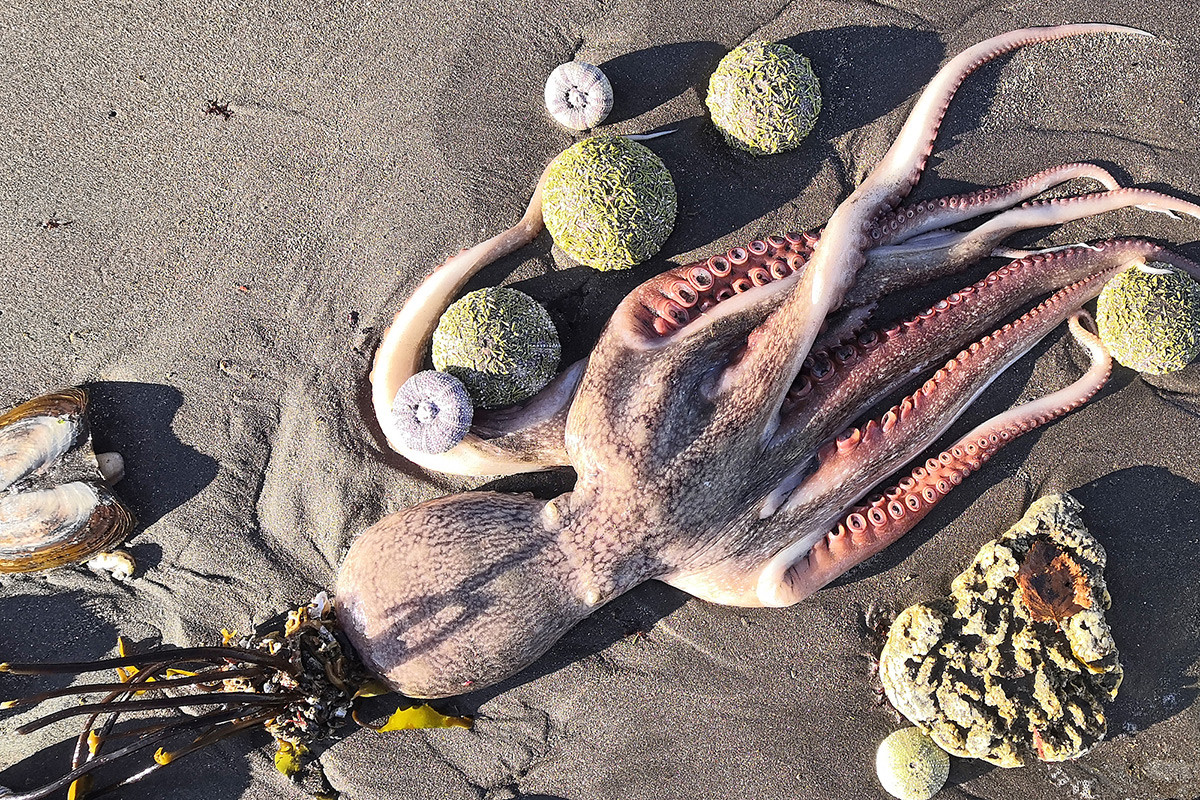 On Oct. 4, an additional 250 kg of material was sent to Moscow for examination, including samples of water, sand, and dead animals.

So far, the Kamchatka authorities have offered three possible explanations. The first is a manmade spill of toxic substances. “When taking the samples, the chemical glassware became covered with an oily, bright yellow substance which, according to my colleagues, could indicate the presence of a pollutant in the water with similar properties to industrial oil,” said Aleksey Kumarkov, the regional acting minister of natural resources and ecology. It should be noted that in Russia phenol in water is often used in oil refining, for example, for purification in solvent refining units. 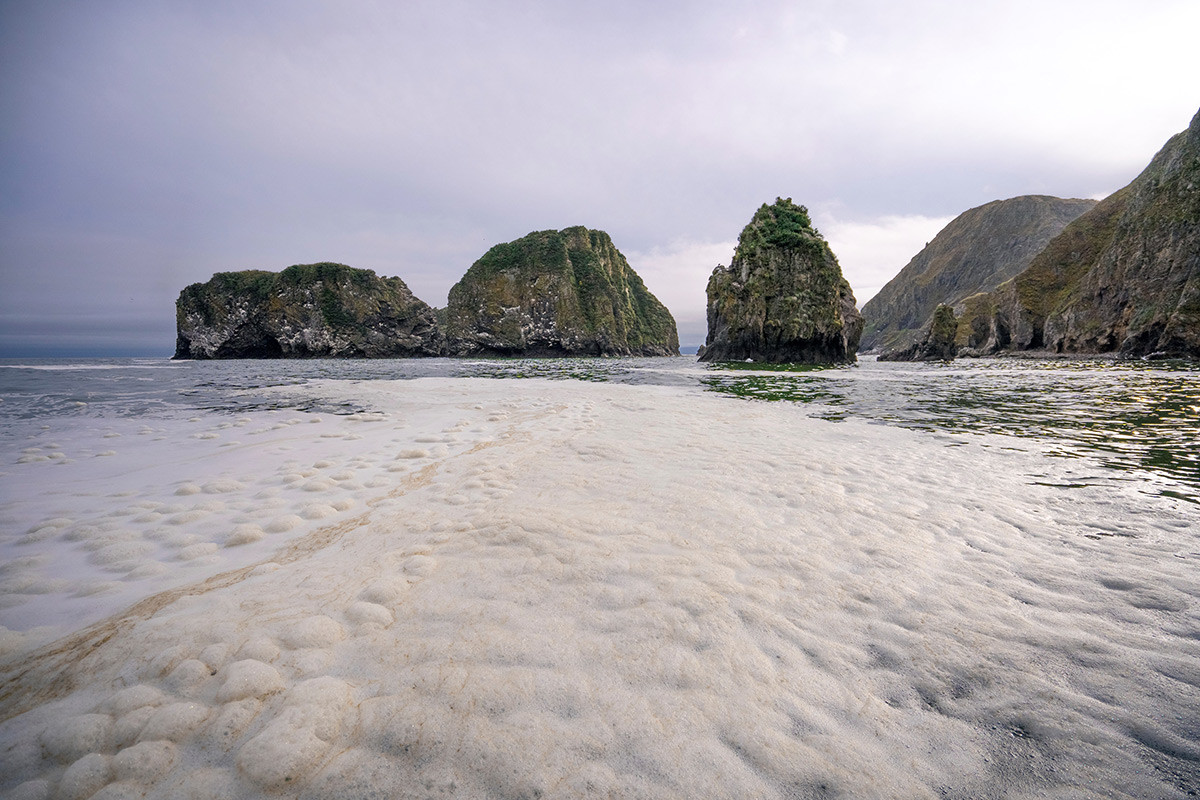 Other versions cite natural phenomena, and have nothing to do with human activity. “[One explanation] is related to the behavior, so to speak, of algae that got carried to the coastline during the storm,” said Kamchatka Governor Vladimir Solodov during a briefing. A third version pertains to seismic activity due to the considerable volcanism in the region.

But locals have their own other hypotheses. For example, the pollution is rumored to be due to a leak of rocket fuel from a military base or a nearby pesticide landfill.

“At around the same time as the first symptoms appeared, military exercises were being held on Khalaktyr beach and in the adjacent water area,” wrote Ekaterina Dyba, an administrator of the surfing school and one of the victims, on Facebook.

This has to do with the nearby naval submarine base, which houses, among other vessels, the latest Borey-class nuclear submarines. Under the NATO classification, the base is called the "hornet's nest" and it lies 50 km from the beach. Meanwhile, the Radygino rocket firing range, where the exercises were held, is a mere 18 km away, and since 1998 has been used to store around 300 tons of rocket fuel.

Nevertheless, as stated by the military command of the Russian Pacific Fleet, “no exercises involving the use of heavy military equipment” have been held at the Radygino range since June, including the water area. At the same time, anonymous sources for the newspaper Novaya Gazetaclaim that a fuel leak from this firing range is the most likely culprit.

Suspicion also fell on the Kozelsk pesticide landfill, especially after Greenpeace posted satellite images of the Khalaktyrka River flowing into the ocean, showing that the river turned a sickly yellow color a month ago on Sept. 9. This landfill is located on the bank of a tributary of the Nalycheva River, on the other side of the beach. Almost no information about it is available from open sources, except that it is used for storing tons of toxic waste (at least 20 tons of arsenic, plus a large amount of mercury). 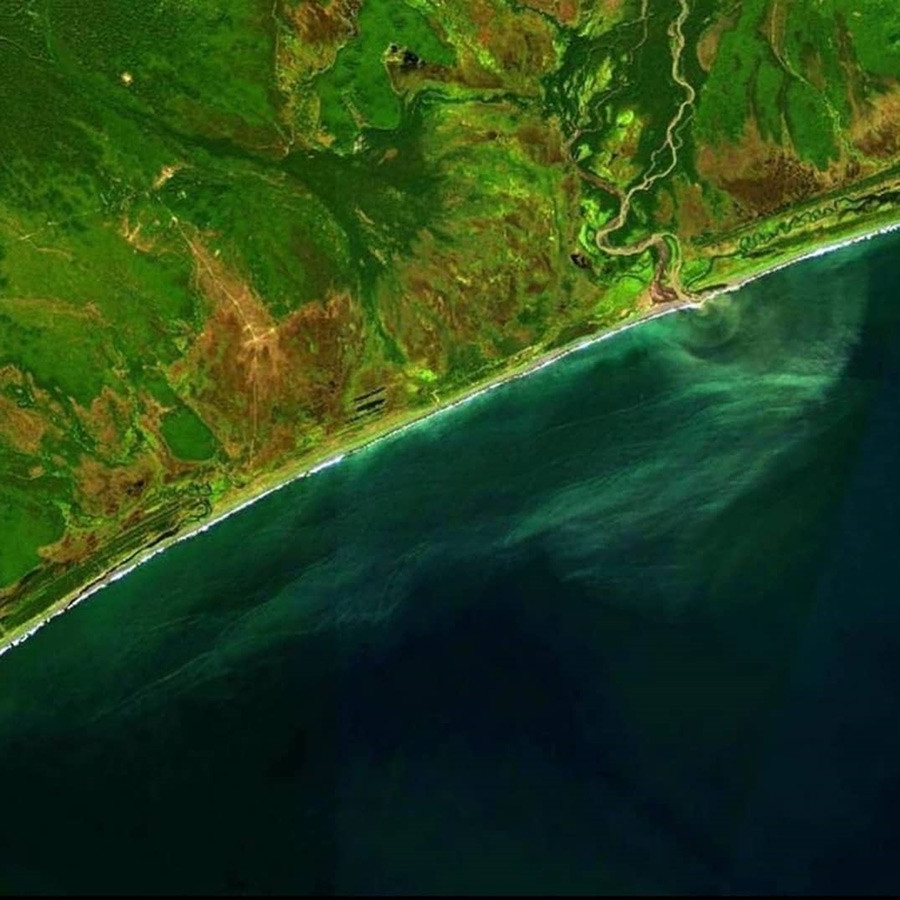 Greenpeace posted satellite images of the Khalaktyrka River flowing into the ocean.

According to local media, there have already been leaks from buried pesticides. Regional agronomist Anatoly Fedorchenko said in 2006 that “this amount [20 tons of arsenic] is enough to poison the entire northern Pacific Ocean.” Although the landfill was mothballed in 2010, additional checks are now due to be carried out.

“I was surprised to learn today that [the Kozelsky landfill] is not within the jurisdiction of any government body. We will correct this and assign a legal status so as to establish who is responsible for it,” said Vladimir Solodov in a broadcast on Instagram on Oct. 5. Solodov’s ill-informedness is partially excusable given that he became acting governor only on April 3, 2020, having moved from Yakutia, and assumed the governor’s office on Sept. 21. 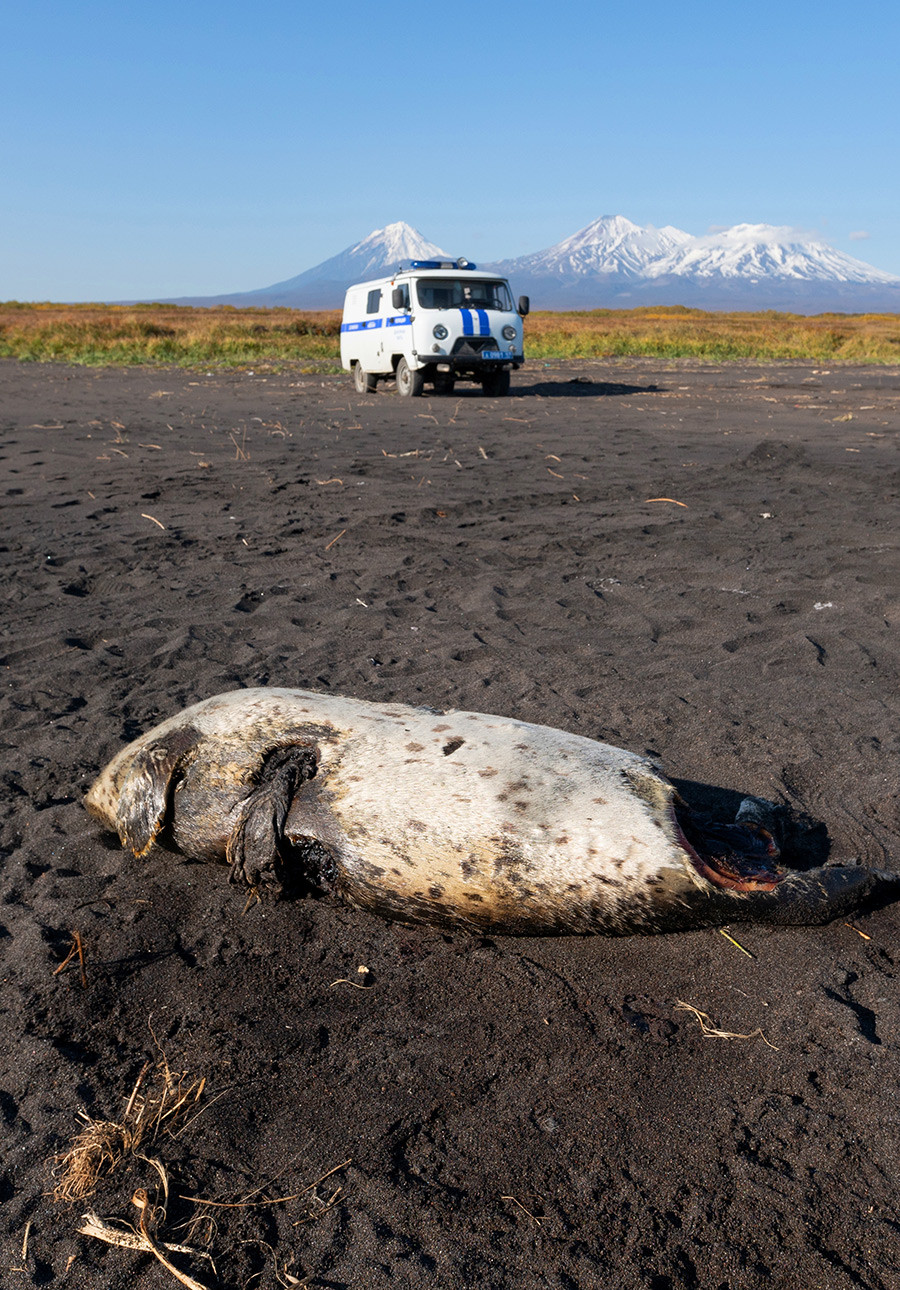 WWF Russia points the finger squarely at toxic substances. This is because, judging by the signs, the pollution runs a lot deeper than just the surface layer of the water, as would be the case after an oil spill. Indirect evidence for this is that bottom-dwelling species of animals and plants, which were washed ashore in some areas, suffered badly.

“The photos depict red algae. It lives at great depths (15 meters and more), and is not afraid of storms. It ends up on the shore only in extremely rare cases, and never in such quantities. Personally, I’ve never seen it on the shore,” says Sergei Korostelev, doctor of biological sciences and coordinator of the WWF Russia program for sustainable marine fisheries. “The same can be said about gastropods, whose shells usually get carried to the shore empty. Here we see a shell with a dead mollusk inside.” 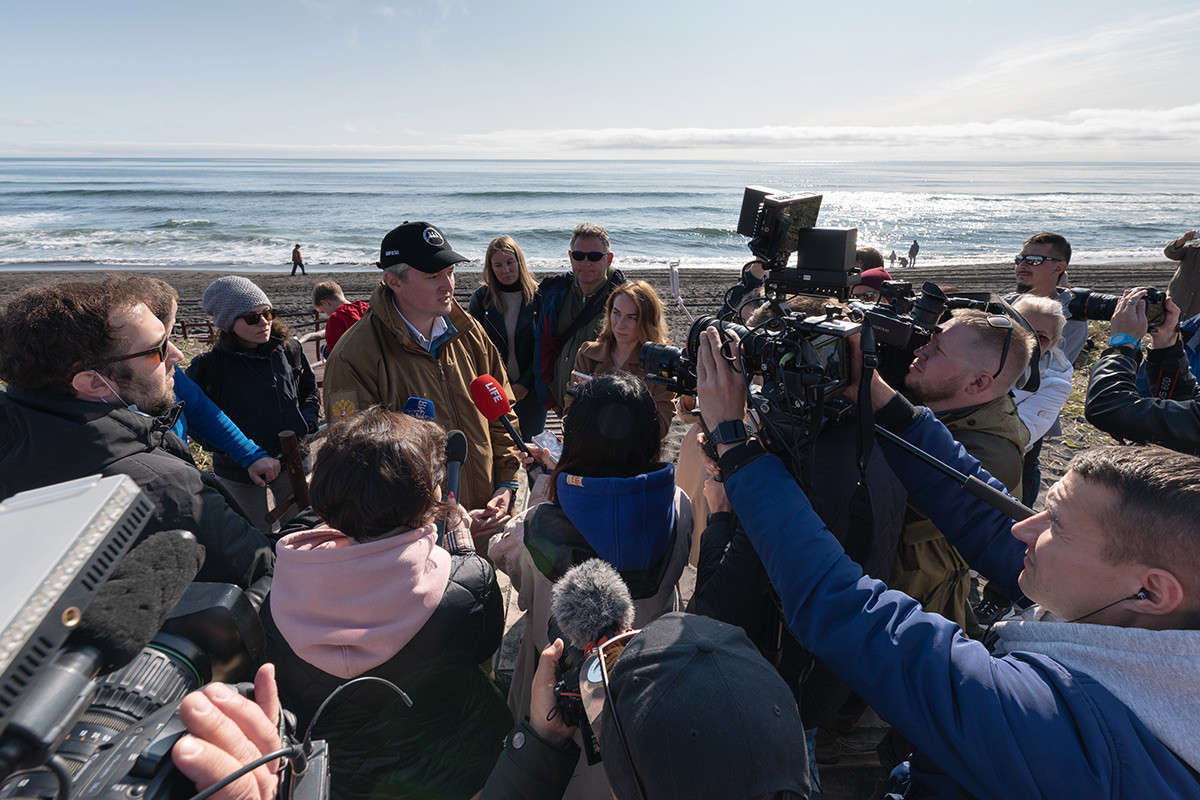 Greenpeace activists also identified pollution in the water off the coast of Kamchatka, in the form of several slicks of unknown origin. “We observed a yellowish foam on the ocean surface in various places. The water too is opaque. In one location, we found dead animals. The slick, or rather volume, since it’s not only on the surface, is moving along the coast,” said Vasily Yablokov, head of Greenpeace Russia’s climate project.

“It’s not an oil slick, but the inflow of fresh water into salty,” the governor explained the Greenpeace images. He confirmed the pollution and death of marine life, but stressed that the only large marine fauna to have suffered were four seals, one of which was physically disfigured. “Most likely, a killer whale bit its head off, and its body was washed ashore,” said the governor.

The scale of the disaster

Because no one has counted the true number of dead and injured marine animals, the scale of the disaster has yet to be assessed.

“Khalaktyrsky beach is a very popular place with tourists and locals. Everyone comes with a smartphone, camera, and internet. However, there are only three videos [circulating online]. Why so few? Is everyone blind? Or did everyone’s camera break at the same time? The most logical answer is that there weren’t ‘thousands of dead’ or a ‘cemetery of sea animals’ or an ‘ecological catastrophe,’” wrote lawyer Galina Antonets from Vladivostok on Facebook, who was visiting Kamchatka at the time.

The absence of vast numbers of dead animals was also noted by other eyewitnesses, including Russia Beyond’s very own editor-in-chief, Vsevolod Pulya, who was in Kamchatka on a working trip: “I walked along Khalaktyr beach, about 4 km in total, and didn’t see any yellow water or smell anything unpleasant. That said, my colleagues, who were closer to Cape Mayachny at about the same time, said they detected an unpleasant smell coming from the ocean that gave them a headache.” Nor did Vsevolod notice any large animals washed ashore, such as octopuses or seals, only “small fish and mollusks in some places,” with no visible damage.