How Muscovites have responded to new Covid-19 restrictions 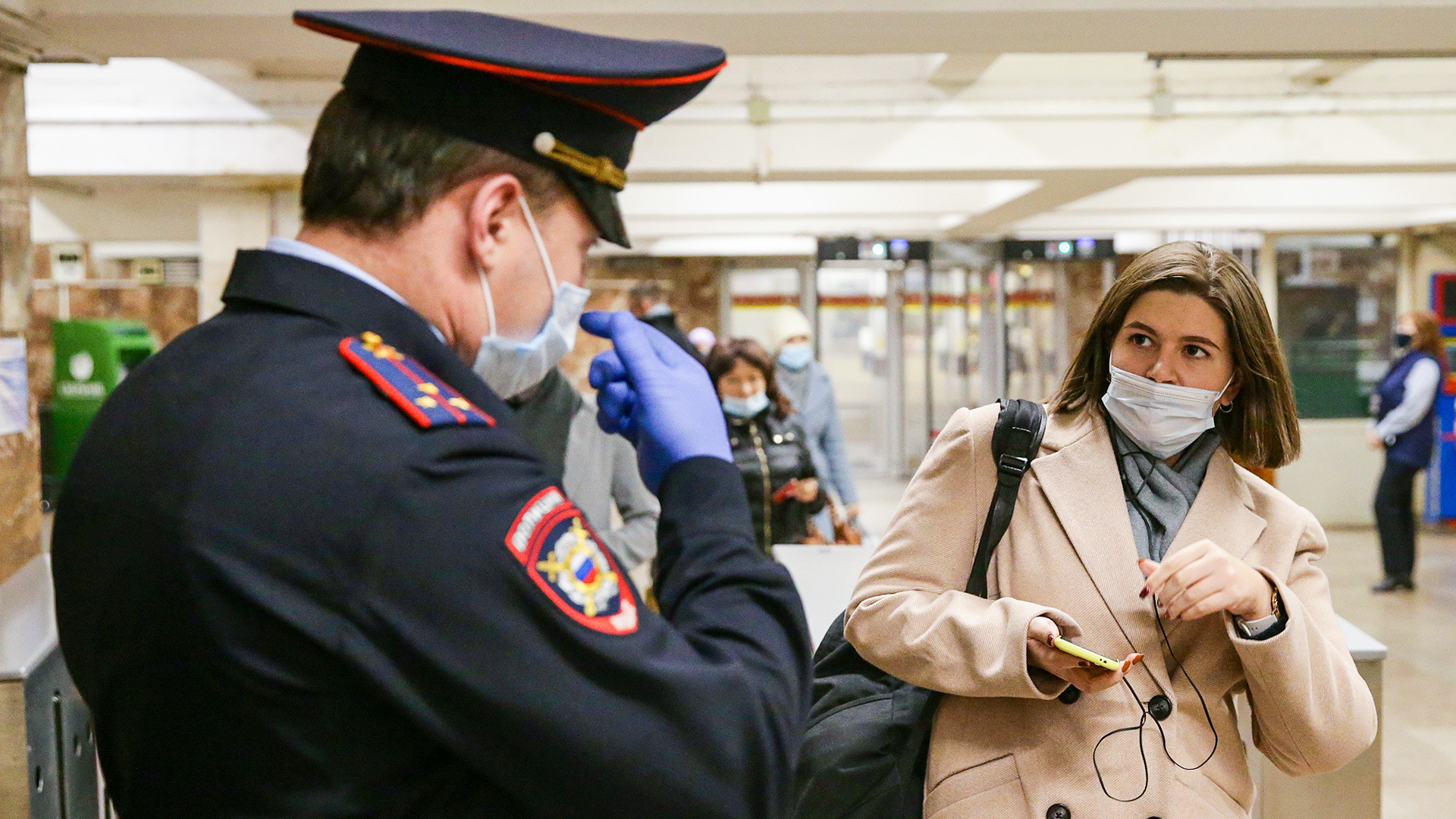 Monitoring compliance with the mask regime during the Covid-19 pandemic

Kirill Kukhmar/TASS
From September to October 2020, the number of daily coronavirus cases in Russia trebled - from 5,000 to 15,000, with 30 percent of all the cases located in Moscow and Moscow Region. So, the Moscow mayor has imposed new partial restrictions. But not everyone is happy and some residents are finding them impossible to comply with

“Do you seriously believe that this piece of rag on your mush will stop the virus? For your information, not even a condom can prevent some viruses and this is just a face mask. Wimps!”,

“I’ll f*cking well beat up the inspectors if they try to nab me. Under no circumstances should you give or show them your ID. Only at a police station. Try to run away. Spit at them first!”

“God forbid you get sick. If you do, though, you’ll see what a horrible nightmare it is. I got it and almost kicked the bucket. Don’t be a denier - put on a pair of gloves!”

These were some of the different comments of Muscovites in the Baza news channel chatroom on the Telegram messaging app on October 16, 2020. They were reacting to the reintroduction of the ban on using public transport in Moscow without wearing face masks and gloves. More than 10 new restrictions have been introduced in total.

One of the main restrictions affects bars, clubs and other late-night venues - from October 19, 2020, staff and guests can only enter entertainment venues from 00:00 to 06:00 after registering their telephone numbers. And, in the rest of Moscow Region, late-night entertainment venues have been banned from operating altogether between the hours of 00:00 and 08:00. 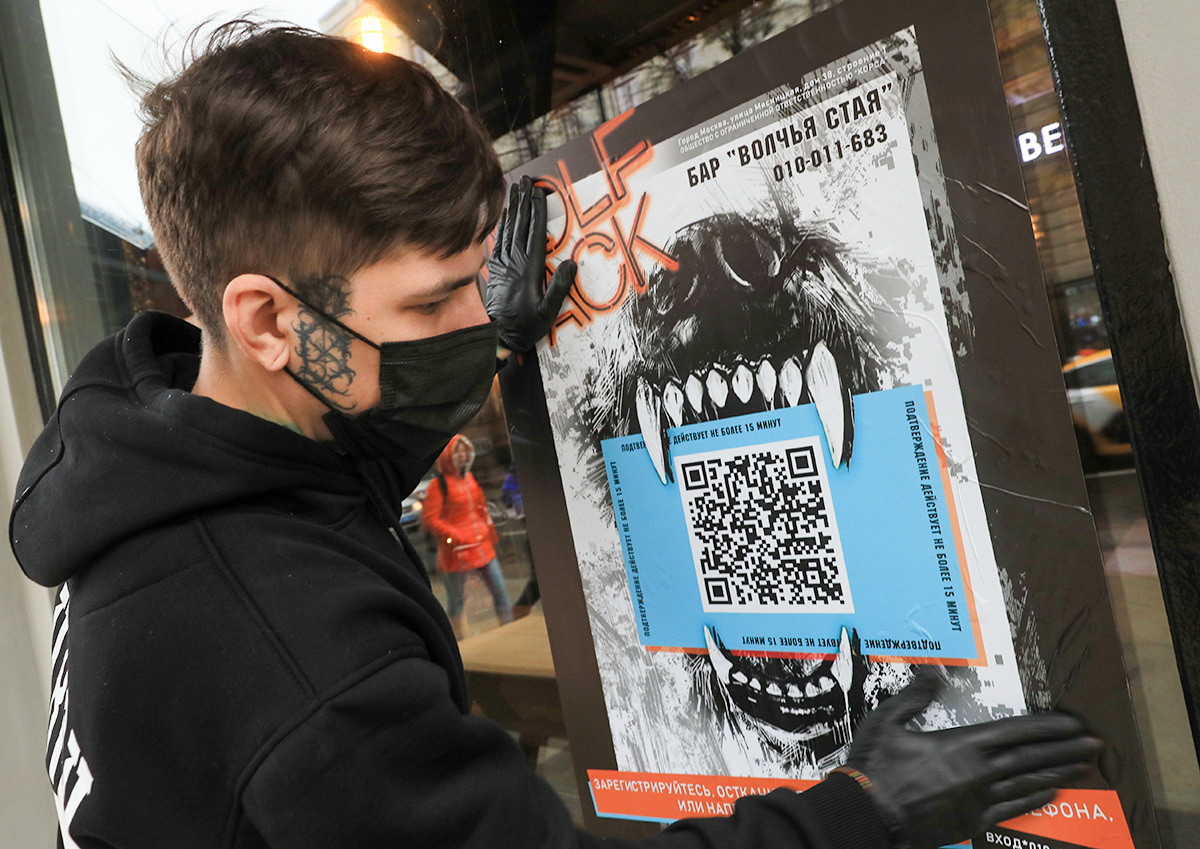 “On entering the premises, guests will either have to scan a QR code or send an SMS message to a special short number,” Moscow mayor Sergey Sobyanin wrote on his blog. If any guest is subsequently discovered to have Covid, everyone else will be notified that they need to take a Covid test.

Most residents of Moscow and Moscow Region reacted negatively:

“What next? Compulsory video surveillance in the toilet?”

“Soon we’ll have our fingerprints taken and a semen analysis done in order - ‘just in case’ - to determine paternity later.”

“And why are the clubs still open anyway?”

These are just a small selection of comments to the mayor’s post on the VKontakte social networking service.

Confined within four walls and partying in communal hallways

“We’re thinking of having a booze-up in the communal hallway, we can come to your place, will you buy beer for us?” Alevtina, the 16-year-old daughter of my mother’s friend, wrote to me on social media on October 15.

Alevtina is in her final year - year 11 - at school. In less than a year, she is to take her EGE (a state exam required to apply to university). Since April 2020, she has been remote learning. 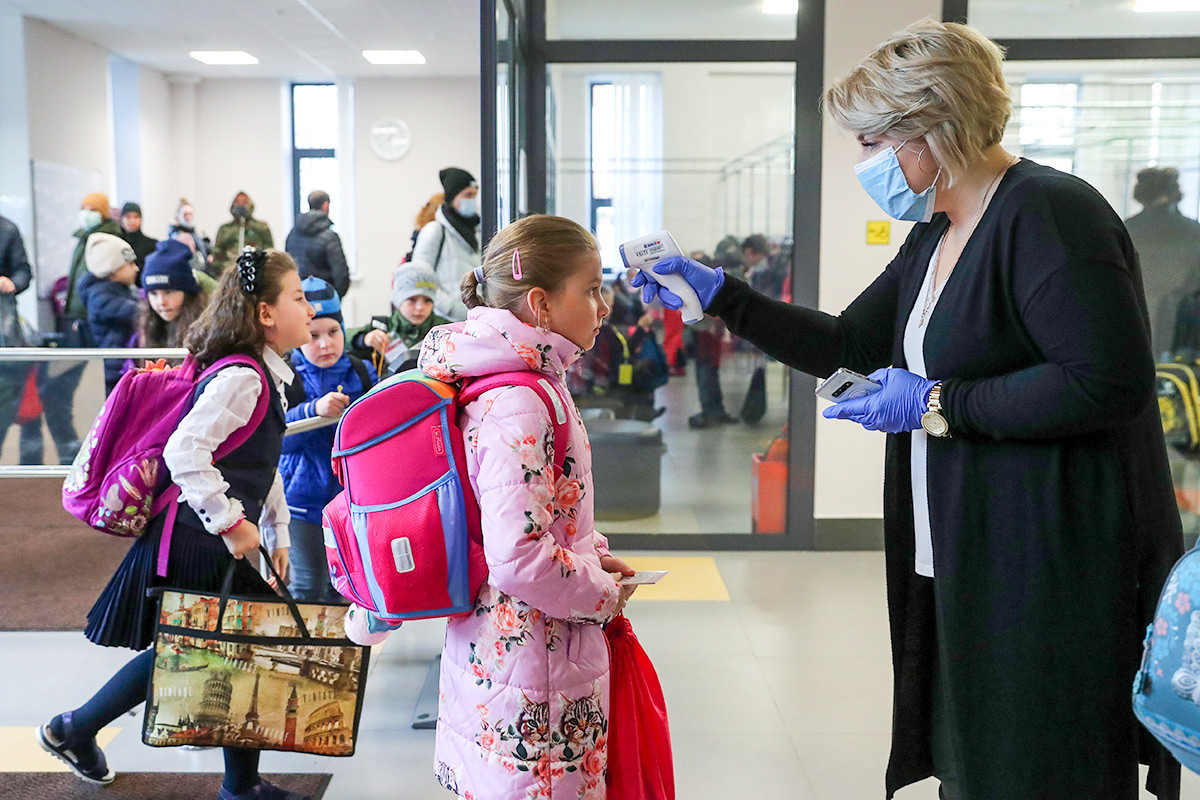 Russia. Moscow. Temperature measurement for students at the entrance to the building of secondary school No. 1392 named after D. V. Ryabinkin

According to Alevtina, studying is now much easier. Also, Sobyanin extended the school half-term holiday from one to two weeks, ending October 18 - so she had a lot of free time on her hands to work part time at McDonald’s. But Alevtina’s mother, Irina, on learning that senior classes (years 6 to 11) have had their remote learning extended until November 1, 2020, “felt like howling with horror from her balcony”.

“My daughter doesn’t study at all and roams the streets and most children are doing the same. Many pupils in her class do not accept this teaching format. It is real child abuse,” Alevtina’s mother complains. 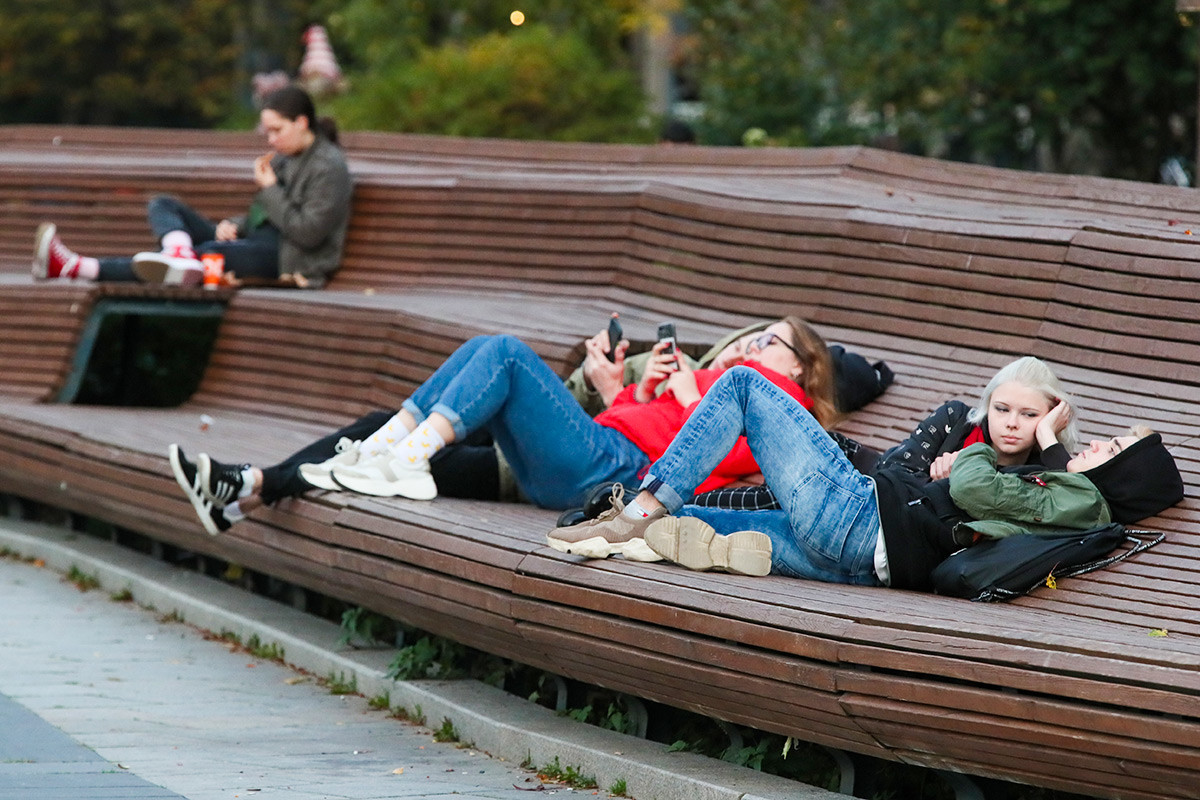 Moscow, Russia - October 11, 2020: People lie on a bench in Moscow's Muzeon Park of Arts. 4,501 new confirmed cases of the novel coronavirus infection were reported in Moscow, and 13,634 in Russia on October 11, 2020, the highest rates since the start of the pandemic

In order to force children to stay at home, the Moscow mayor blocked subsidized travel cards for school pupils and college students until October 18. Moscow pensioners over the age of 65 use similar subsidized cards entitling them to free travel around the city and their cards have also temporarily stopped working. On October 19, the cards of junior school pupils (up to year 6) were unblocked. Anyone older, including pensioners, is still deprived of their subsidized or free travel for the time being.

“My daughter goes to college in Moscow Region. The college has not moved its students to remote learning, so she has to pay the full fare, despite the fact that she is entitled to subsidized travel by law! Who will refund me these costs?” Complains Galina Itskova, a mother of three. Her monthly salary is 10,560 rubles (approx. $136). She has filed a complaint on the hotline, but has had no reply yet.

In addition, Sobyanin has ordered sports groups and clubs to close in Moscow. The majority of them have started online classes. Thus, the two-room apartment of Natalia Shipova, a single mother of four, has become a martial arts gym.

“Two of the children are in secondary school, years 6 and 7, and both are keen karate practitioners. Every day, they are shown via webcam what exercises to do and they do them. We push the sofas together and move the tables to one side and, as I work at my desk nearby, I have their constant tussling going on in front of me,” Shipova laments.

Additionally, she says, the teachers can’t explain new material to each pupil remotely. No more than 20 minutes are allocated for explaining new things and marks are inflated, because it is impossible to give a proper assessment of what pupils know via computer.

“This is a wasted year of learning. It is difficult not to be emotional - the situation is simultaneously a cause of despair and dismay,” Shipova complains.

Working from home with a smell of petrol

In addition to older school pupils, pensioners and people with chronic health conditions, the Moscow mayor’s office has ordered 30 percent of all staff of Moscow companies to be switched to working from home from October 5, 2020. One of them is Yegor, a research worker at a Moscow scientific center.

Every time Yegor tries to sit down to get some work done, he is distracted by noise from the street and the smell of petrol from a leaf blower which Moscow janitors use to collect fallen leaves into piles.

“They’ve also cranked up the heating to plus 20 degrees and there's no air. If you require people to work from home then at least give them decent conditions for being at home!” Yegor complains. 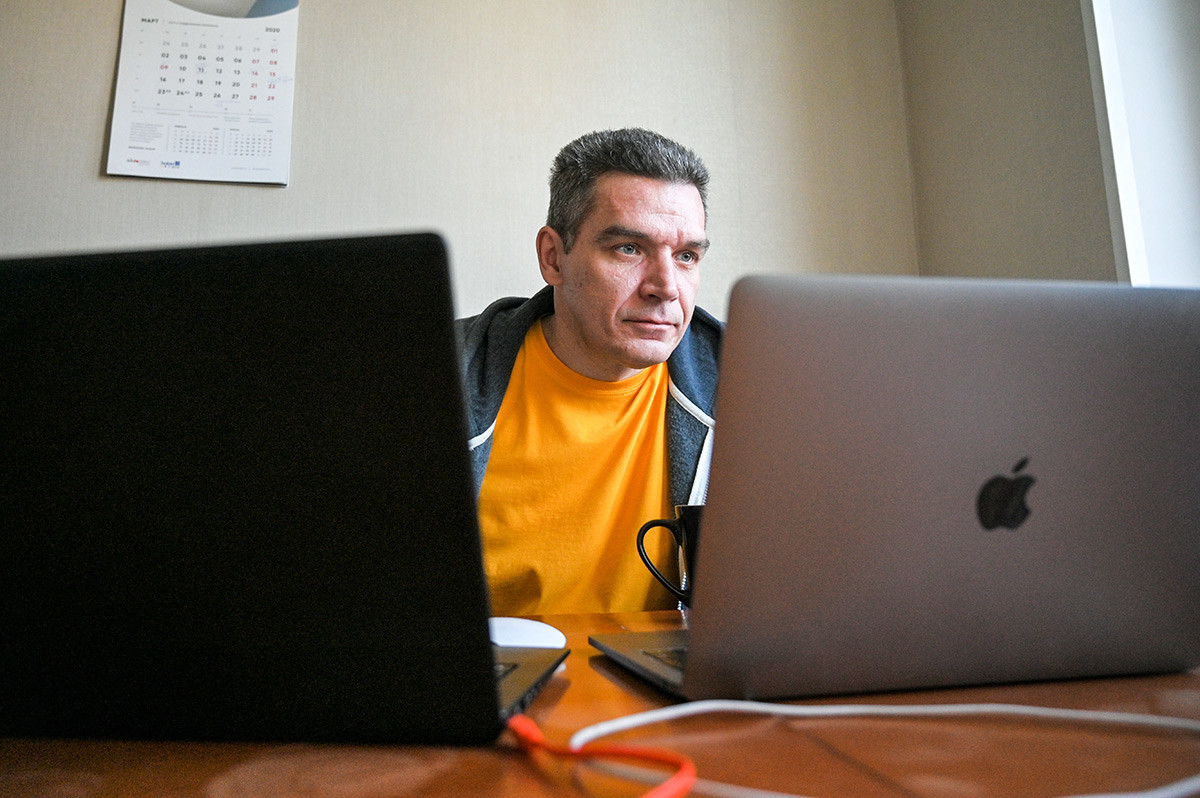 Companies face a fine of up to 300,000 rubles (approx. $3,850) for failing to comply with the home working rules, rising to one million rubles (approx. $12,826) if a member of staff falls ill. Larisa Martynenko, owner of a small retail company, doesn’t know whom to send home - she only has a few staff and one of them works as cashier, loader and sales assistant all at the same time.

“How can you stack shelves, serve customers and work on the till from home? Could someone from the mayor’s office explain precisely how it can be done? What are small retail trade companies supposed to do in this situation? Are we going to be fined?” Larisa asks on the mayor’s personal VKontakte page. 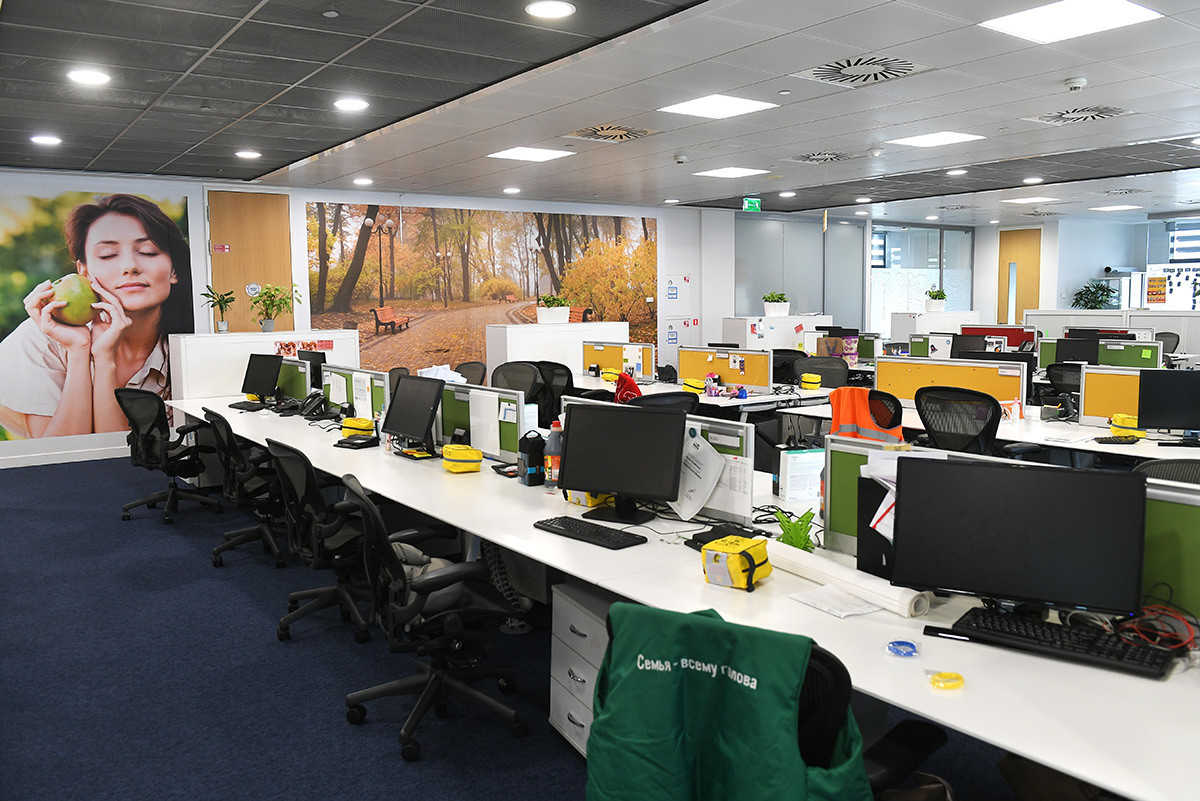 Deputy head of the Moscow City IT Department Dmitry Ivanov subsequently clarified that the data would not be personalized.

“The information is not being collected in order to monitor the movements or specific location of a member of staff. The data are needed to enable an assessment to be made of changes in overall passenger flows and the effectiveness of measures adopted by employers to switch staff to working from home,” Ivanov explained.

Nevertheless, not all residents trust this declaration.

“All our staff are builders, cleaners and office workers who can’t switch to working from home,” complains Yelena (her name has been changed at her own request), an accountant at a small company that builds garages. “What is more, the Mos.ru website, via which we are supposed to provide these lists, isn’t working, the servers are down (the outage occurred on October 12, 2020). We are thinking of not declaring the real lists of staff vehicles to avoid having them traced and then we’ll see what happens.”

The Moscow mayor’s office has yet to respond to Russia Beyond’s request for comment on the negative reaction of Muscovites to the newly adopted measures.