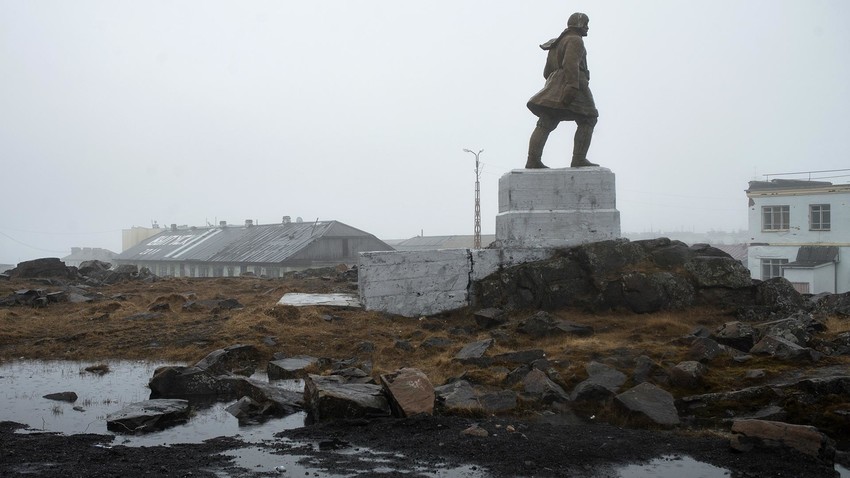 Valery Melnikov/Sputnik
They call the settlement of Dikson “the edge of the Earth” for good reason: It’s situated right on the edge of the Arctic Ocean, on the shores of a bay. And if you looked at the population density, every inhabitant would have 1,500 square kilometers of space to play in!

The urban-type settlement of Dikson measures about 220,000 square kilometers, which is comparable to the British territory, with its 243,809 sq. km. But the latest census in 2018 put its population at a mere 548 people. You can imagine how easy it is for them to avoid each other when they’ve had an argument! We’re joking, of course. It turns out that the population lives as a group in a tight-knit settlement. 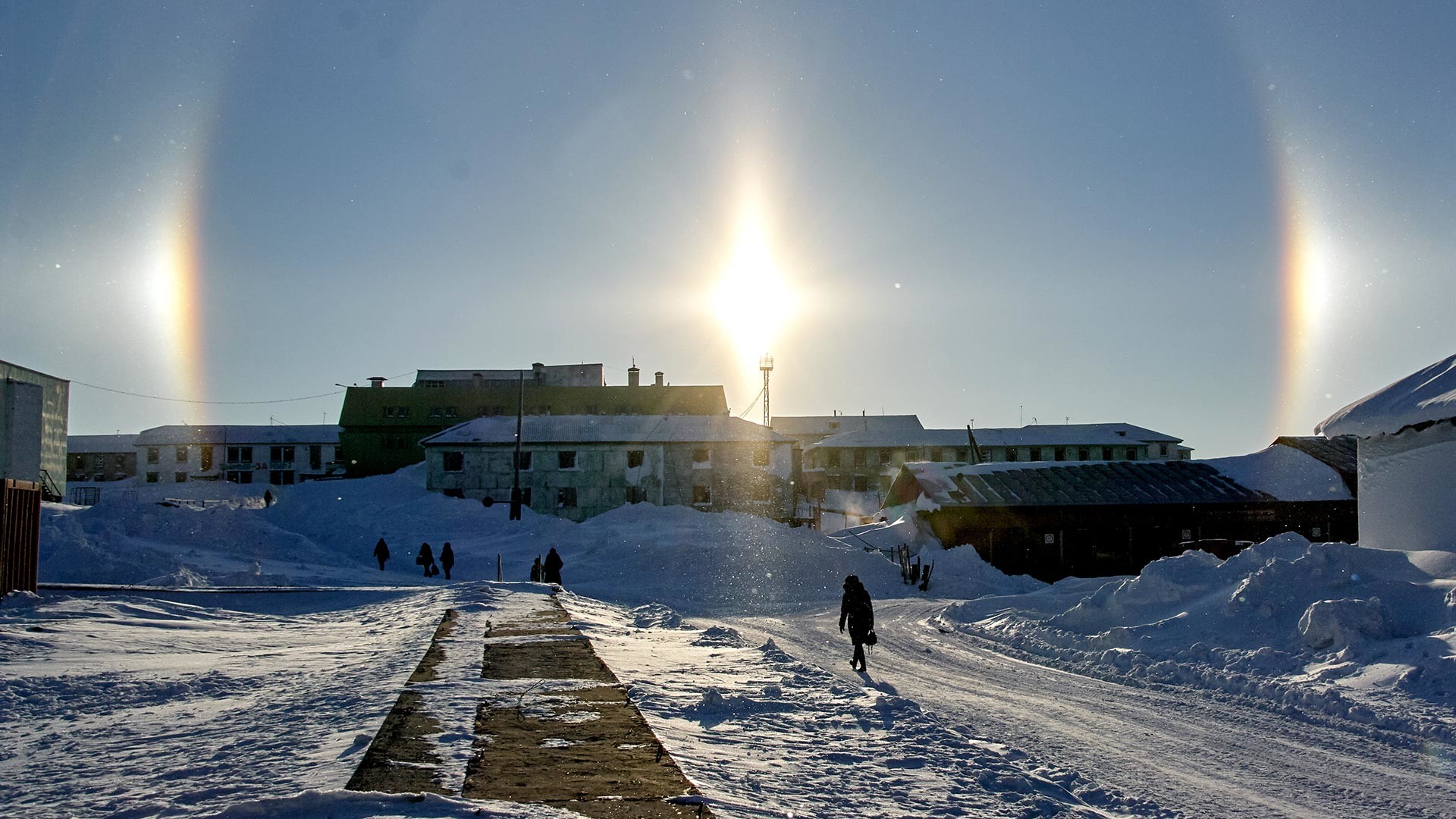 Dikson is currently 105 years old. It was named after Swedish Arctic pioneer Baron Oscar Dickson - it was he who subsidized the expedition to the bay. The area has housed a polar station since 1916.

Over the past 30 years, Dikson’s population has decreased tenfold, with most leaving for the “mainland” - which is what Russians from remote regions like to call the rest of the country.

2) You need a special permit to enter 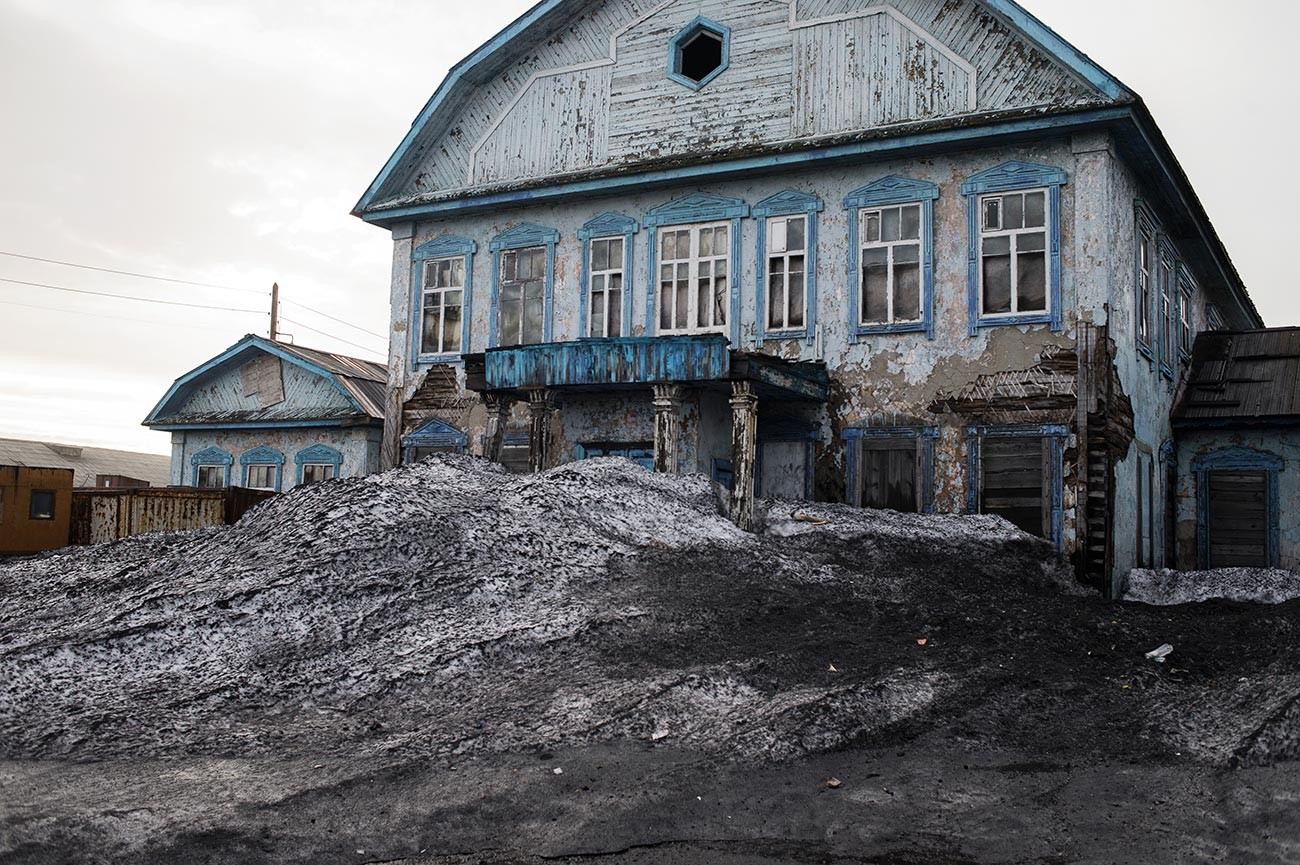 Even locals have to show a passport and registration when entering the territory. Outside visitors need to have a permit, simply because the settlement is coastal and is therefore deemed a state border. You can only get there by air; the settlement’s island has an airport, which receives an old AN-26 once a week. The same goes for all produce and supplies - so shopping is definitely not cheap in Dikson!

3) You can only buy gas once a year

Dikson’s residents can’t just fill up their vehicles when they feel like it. The settlement has no gas station and the nearest one is 500 km away. Not like you could drive there anyway - there are no roads to speak of. 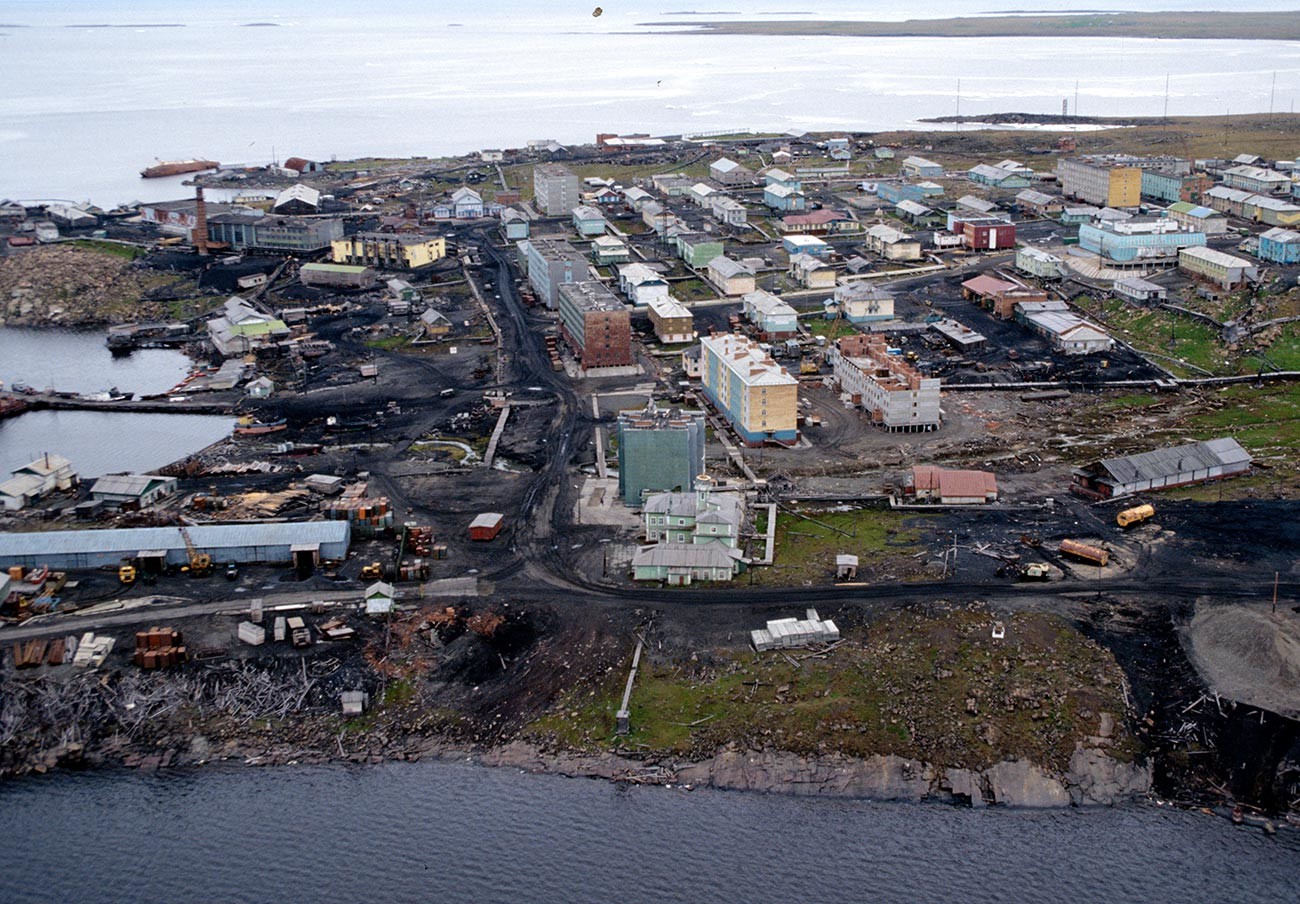 If you need gas, you have to place an order for a shipment that comes in once a year by sea. And you only get one shot. Ironically, there aren’t many cars at all in the settlement. “The gas is needed for snowmobiles and motorboats, for the most part. During [the] navigation [season], we order one to two tons of gas. This is enough for a year,” local resident Aleksandr Anisimov says. 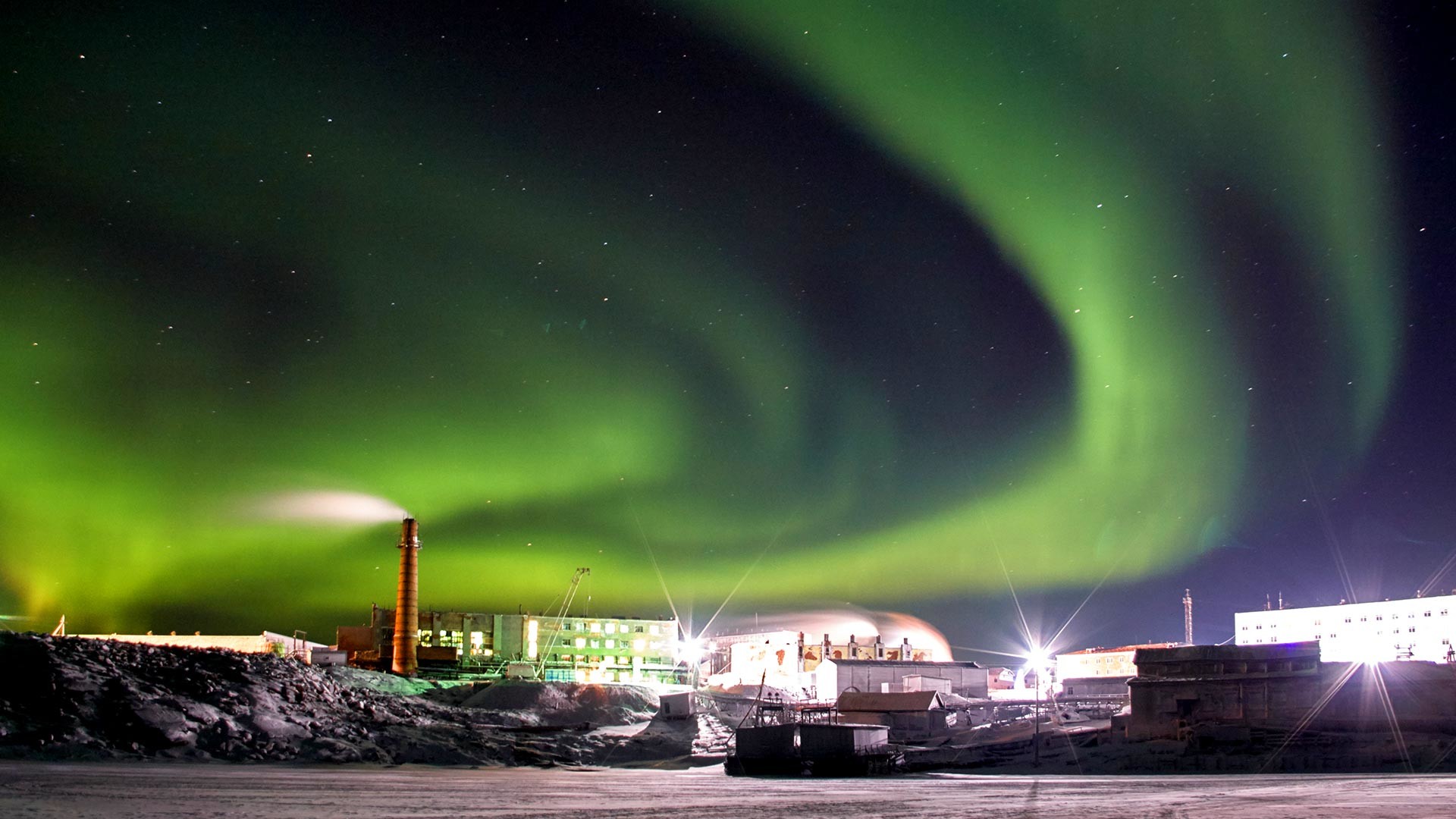 The arctic winter is marked by polar nights, extreme cold temperatures and deadly blizzards, lasting weeks. Dikson gets nine months of that, with temperatures dropping below -50°C (-58°F). But the locals don’t think all that much of it: “The winds are common, the climate is a marine one. But the frosts aren’t as rough as you get in Norilsk or Dudinka, where even a slight gust of wind keeps everyone indoors. There’s wind here, but it’s relatively warm,” believes Albert Mingazhev, an English teacher at a local school.

Most of the snow is constant all year round, so you still see people riding snowmobiles around in June, when it’s +5-6°C (+42°F).

5) There are no trees 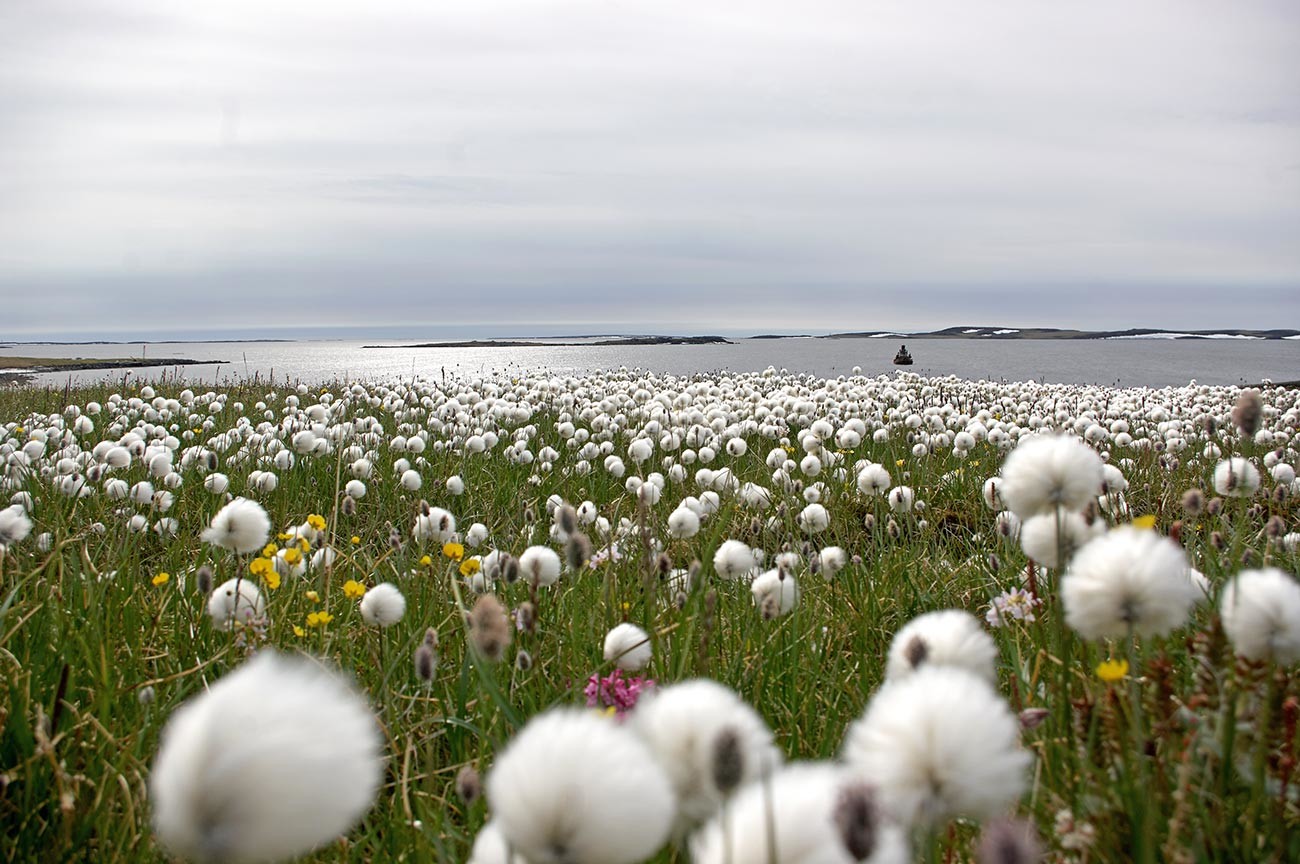 The Dikson territory is an arctic desert. There are no trees, not even the dwarf kind. Summer brings about a green tundra, while winter covers it with endless snow.

6) The police is there to keep you safe… from bears

Crime in Dikson is pretty much non-existent, but the police still have a job to do - which revolves mostly around warding off wolves and polar bears that often wander into the settlement for a snack. There is a local SMS service with warnings of bears approaching, as well as warnings around town: They offer a stringent recommendation to not go out after 8 pm, not to feed the bears or to take selfies with them (it’s the Russians we’re talking about, after all!). 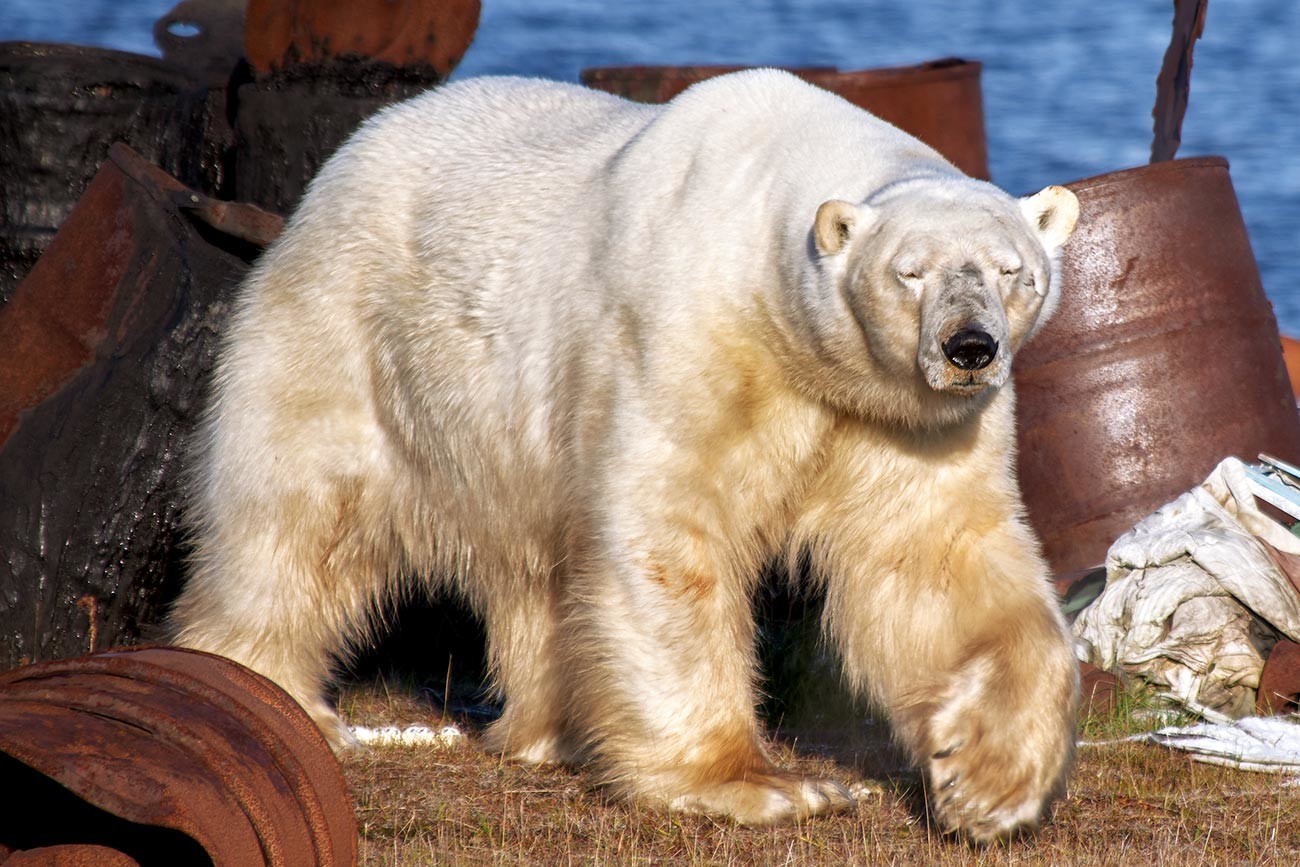 However, the most effective way to predict danger, according to local programmer Robert Prastsenis, is to watch the dogs: “It’s the only safety measure… If the dogs are lying peacefully or running around, then everything is fine. When the locals spot a bear, they call the local administration and police - they arrive and chase away the predator.” 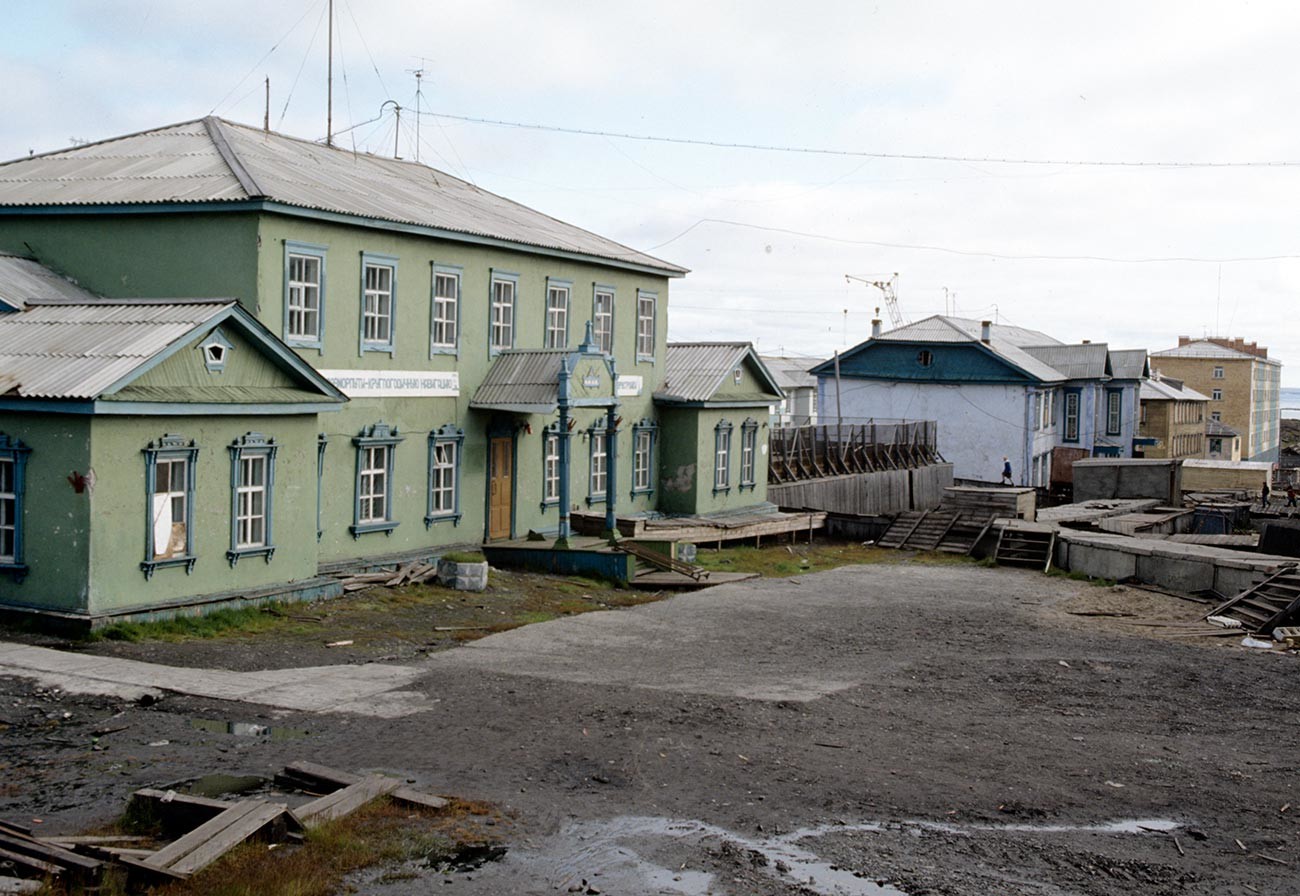 The first mobile network appeared 10 years ago. Internet is available, but the connection is so weak that it would take you an hour or two to load a couple of images (!). To add insult to injury, one month of it costs about as much as half a year of broadband internet “on the mainland”.

8) There are no hospitals

Several years ago, the only hospital in town shut down, because there were simply no doctors in Dikson. If things go south for you, the only way to get help is to radio for an emergency medical aircraft. There is also a medic that comes to regularly inspect the population. 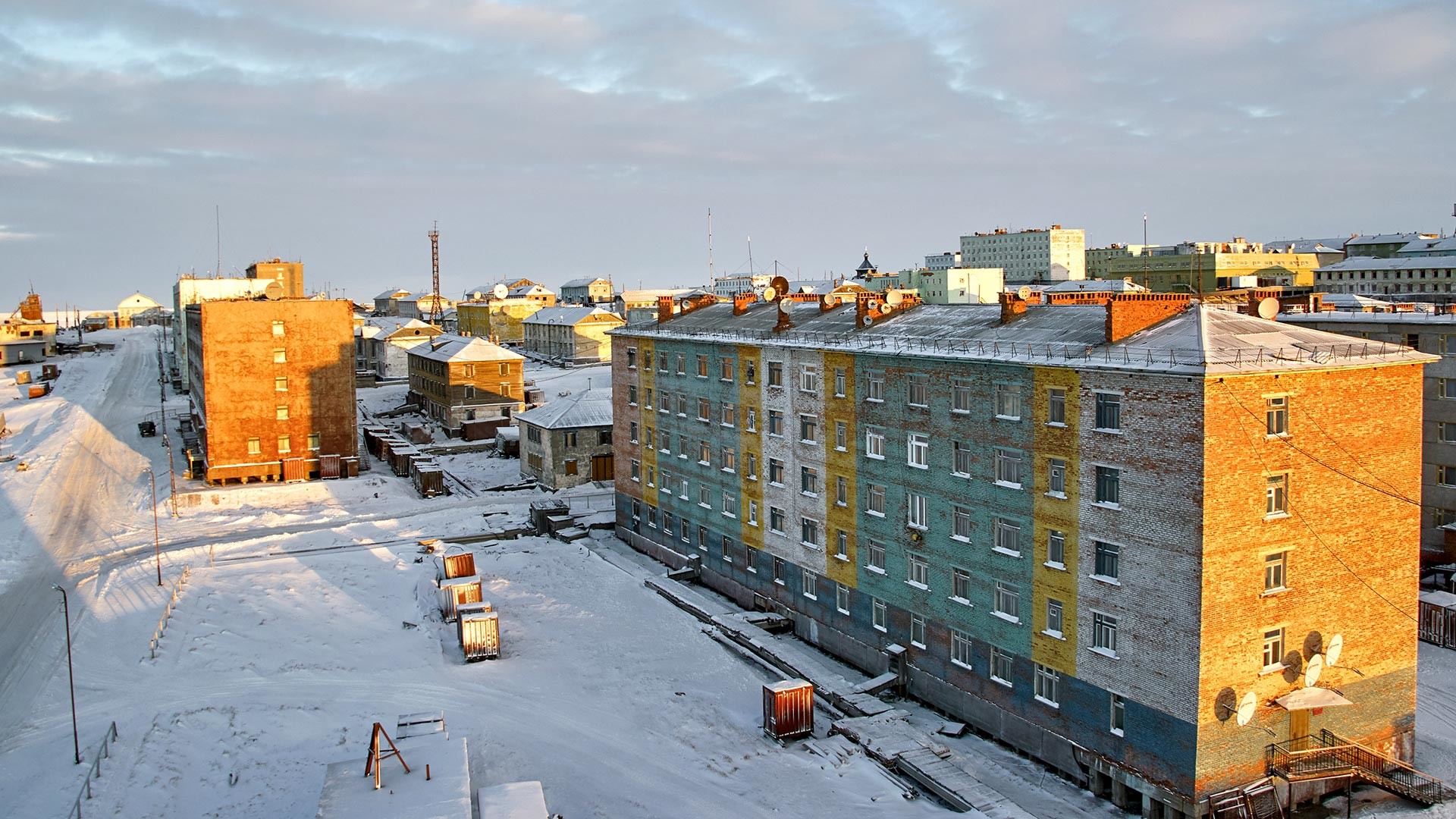 Aside from there being no hospitals, there are also no cinemas… or buses, or cafes, or supermarkets or advertising banners (we’re not sure if that one is a minus). However, there is a gym, of all places. And that’s where most of the settlement’s inhabitants spend their free time. 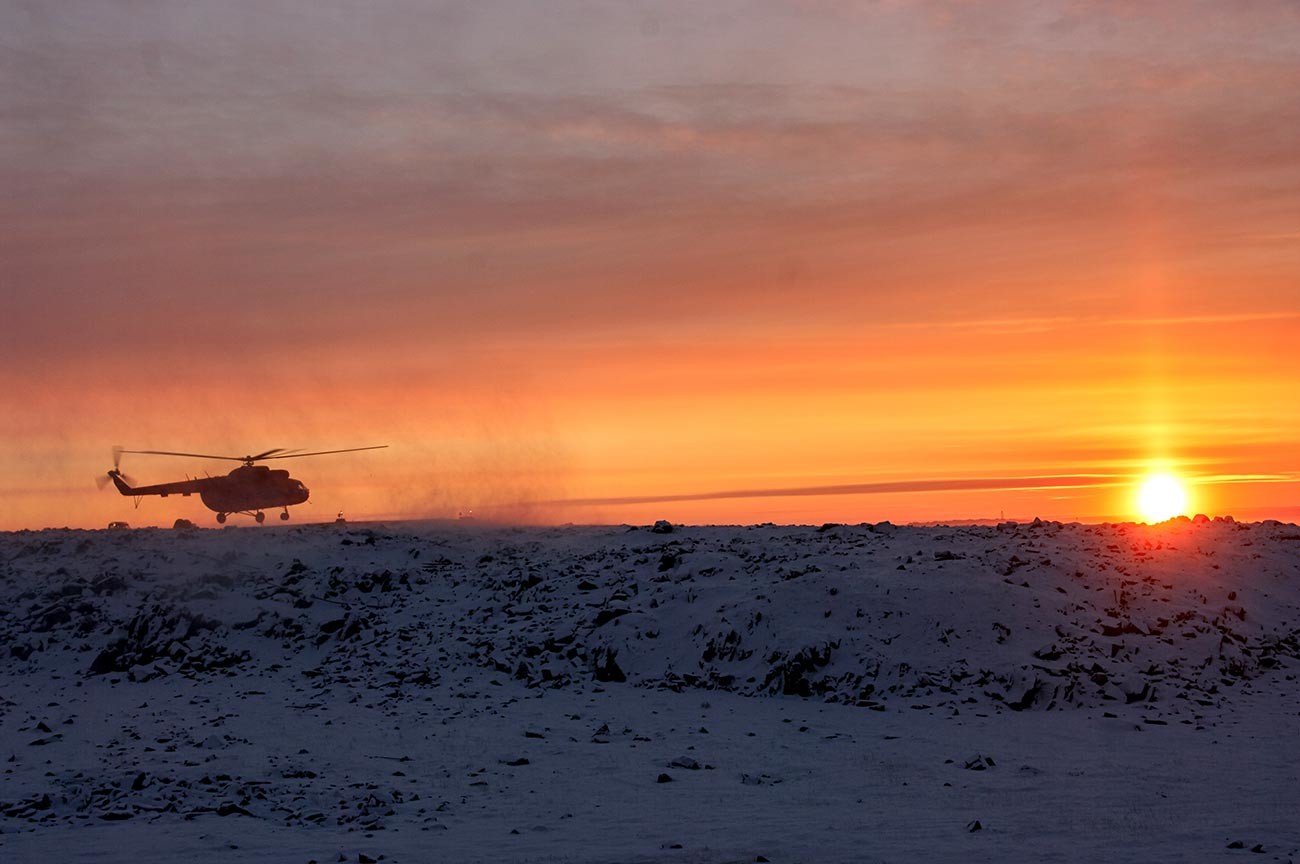 This price tag is 30 times higher than what it costs to keep the same population alive somewhere in, say, the Sayany, another icy place in southern Siberia. Dikson subsists 90 percent on subsidies. Aside from a small number of those who live there all year round, the arctic settlement, for the most part, houses shift workers, almost all of them employed by state-owned companies.

10) It’s the former capital of the Arctic 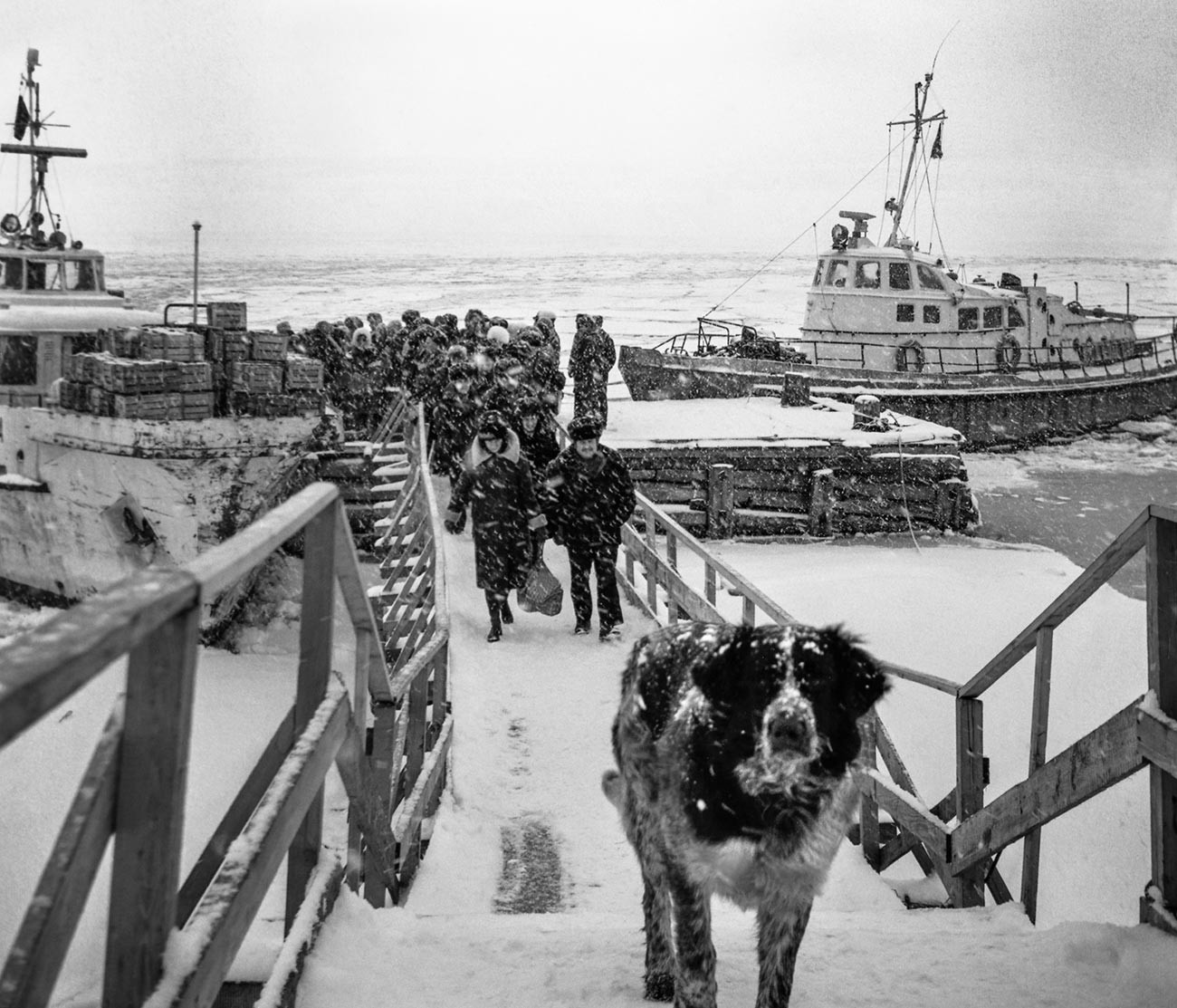 Heavy snowfall in the passenger jetty of the island, Dixon, approximately, September 1980.

In Soviet times, Dikson was the center of trade, development of mines, expeditions and even exile. Geologists, teachers, soldiers, polar pilots and others from across the country  - they all flocked there. In the 1980s, Dikson still boasted 5,000 inhabitants.