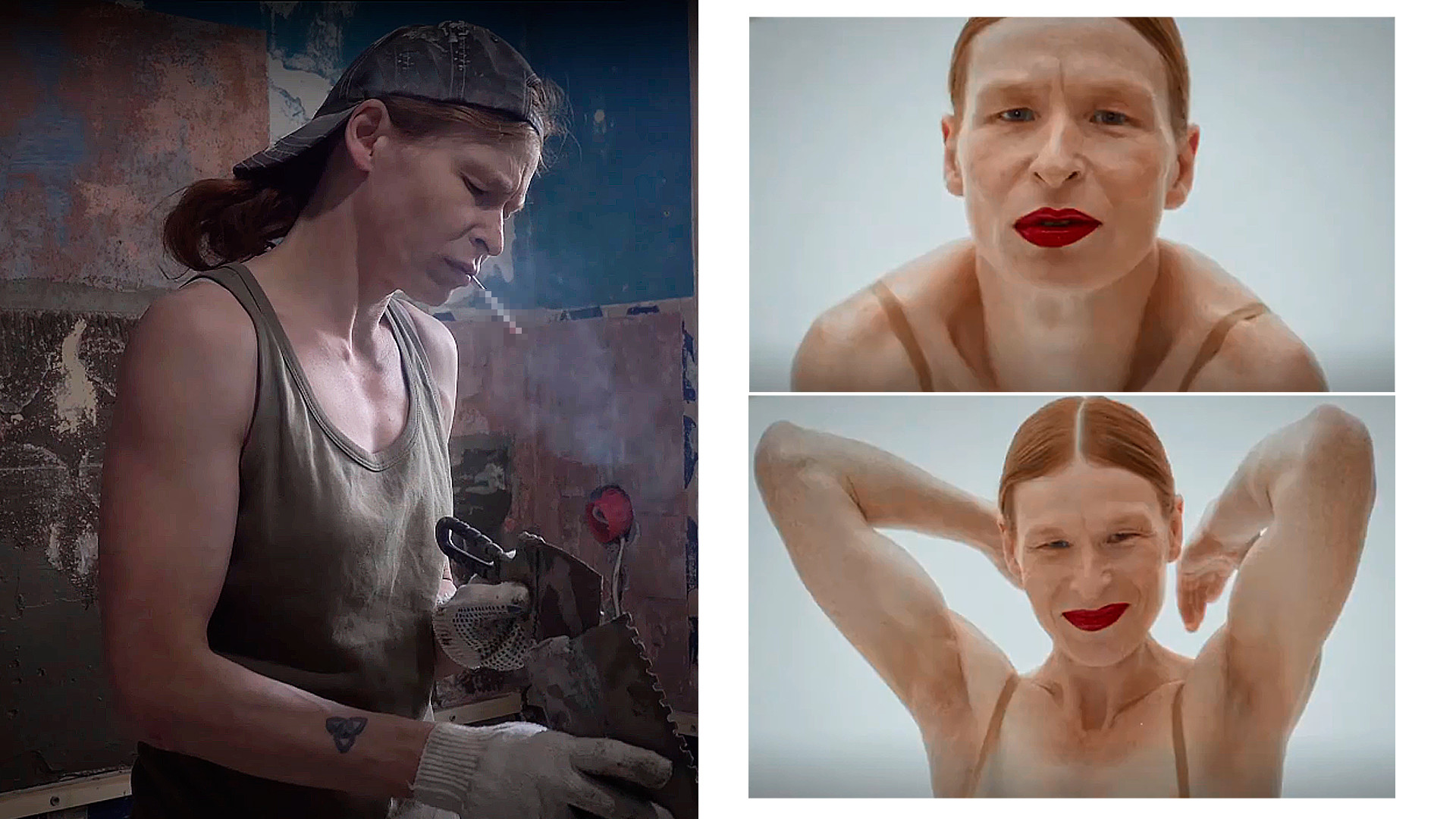 Lumpen Movies; You can do anything
This 40-year-old woman paints walls, pours concrete and demolishes barns every day of the week. But in her free time, she takes part in fashion shows, once even in Paris. Variety sure is the spice of life.

“I’m applying laminate somewhere, covered in dirt and dust. I get a call from the agency: pack your stuff and fly to Minsk for a movie shoot. Okay, I say. I dust myself off, wash my face, change clothes and drive off. They grab me, dress me up and do my makeup. Now, they say, you’re gonna learn an old song in a foreign language. Only a few hours ago, I had a circular saw in my hands,” is how 40-year-old Russian model and builder Nadezhda Lertulo (real last name Zelenova) describes a typical day.

As a child, Nadezhda didn’t even consider modelling. Her parents were deprived of parental rights when she was just one year old and the girl spent her childhood at two boarding schools and played soccer and basketball. In her own words, she was plump with narrow-shaped eyes. Because of her unusual appearance, she often had problems at school.

“They called me ‘ginger’ and ‘fatty’. I learned to disengage, but still it really stressed me out. My peers were even afraid of me, because I might retaliate,” says the model.

Twice she was sent from boarding school to a psychiatric hospital. The first time, due to a medical commission error, the second at the recommendation of her teacher: “She had a strange way of resolving conflicts — by walking off and faking tears, pretending we’d upset her. <...> I had no conflict with her, but she didn’t like me. She understood I knew my own worth and my rights, even as a 15-year-old.”

After boarding school, Nadezhda was offered the choice between sewing and construction college. She already knew how to sew, so she opted for the latter. During her studies, she lived in a hostel and spent her free time painting apartments to earn money for clothes and food.

“Many of the teachers at college said they didn't understand why I was there when I already knew everything.” I have an inquisitive mind, I’m interested in getting down to the nitty-gritty. I was really good at geometry, including graphical projection, as well as physics,” said Nadezhda in an interview with online publication Wonderzine.

After graduation, the future model moved to an apartment inherited from her parents and continued working as a builder.

“Some clients told their friends that I could knock down a shed in no time by applying the laws of physics and a few cables. They were like: ‘Wow, I wanna meet her. Can a woman really knock down a shed?’” Nadezhda says about her experience.

At 37, she visited a friend in Switzerland, who, blown away by her appearance and athletic figure, photographed her. Nadezhda decided to send the shots to Lumpen, Russia's first agency for non-standard models, which artist friends had told her about. A short while later, she was invited to an audition...

Over a near four-year period, Nadezhda took part in the Paris show of Vetements, modeled for lingerie brand My Dear Petra and appeared in shoots for Russian fashion magazines, including Elle Russia and Flacon.

Going forward, Nadezhda plans to start her own DIY channel for women on YouTube and quit her job as a builder.