This is NOT what flight attendants dressed like in the USSR 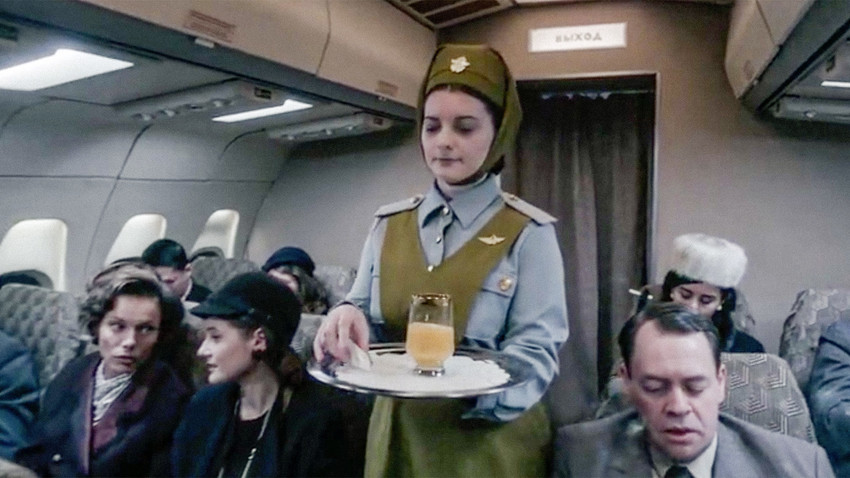 Russians loved Netflix’s new series ‘Queen’s Gambit’ (local movie database Kinopoisk gives it a combined 8.6 rating based on more than 5 thousand user votes). One of the few moments that made the viewers cringe though was the scene on a plane where a Soviet stewardess appears with a tray.

The sight of her is outright spectacular: As her headwear, she wears an odd mix of burqa and a greenish Soviet armed forces side cap; her green khaki apron is tucked underneath misplaced epaulets under a blue shirt decorated with an Aeroflot pin. Ugh!

For all the viewers to appreciate the absurdity of the costume and the creativity of the series’ costume designers, we just have to show you the real-life analog.

At first, there was no standard uniform that the very first stewardesses had to wear. On May 5, 1939, a 20-year-old woman from Moscow named Elsa Gorodetskaya officially became the first stewardess of the Soviet Union, serving on a flight from Moscow to Ashgabat (the capital of Turkmenistan which was part of the USSR back then).

Not only did not Gorodetskaya have a particular uniform, her job wasn’t even officially registered with Aeroflot. Since there were no stewardesses yet, the woman was registered as a storekeeper and referred to as a barmaid while on board. She had to supply planes with tableware and food all by herself, clean the aircraft’s cabin before departure and assist passengers.

The position of stewardess was officially introduced a few months later the same year, however WWII then disrupted commercial flights throughout the USSR, before they resumed in 1946.

Yet, there still was no standardized uniform for all Soviet stewardesses. There was only a general recommendation that stewardesses observe the general “white top-black bottom” rule.

The first standardized uniform was only adopted in 1954 and only applied to international flights. The new uniform was made of high-quality blue wool fabric and included a blouse, skirt, fitted jacket, raincoat, coat, hat, shoes, gloves and cap. 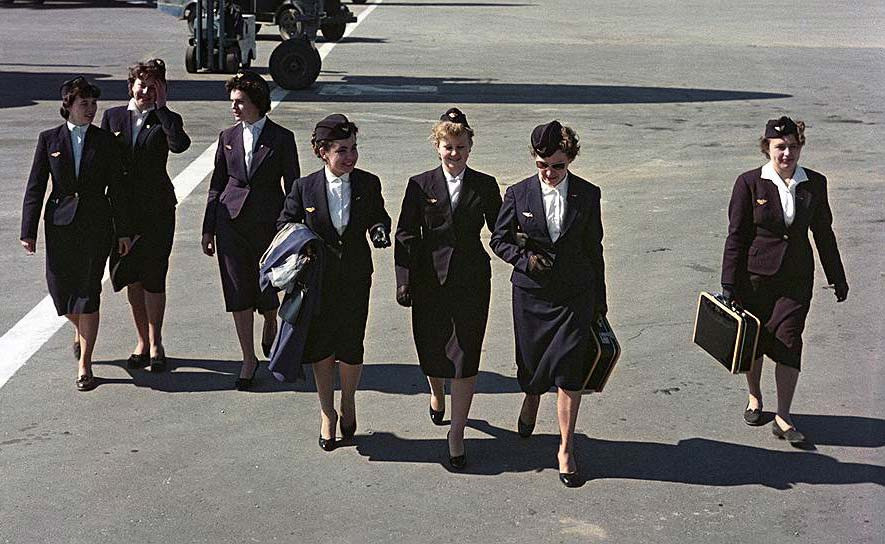 A new stylish gray uniform appeared in 1962, only to be substituted with another one in 1967 that was introduced for new regular flights connecting the USSR with Japan and the U.S. 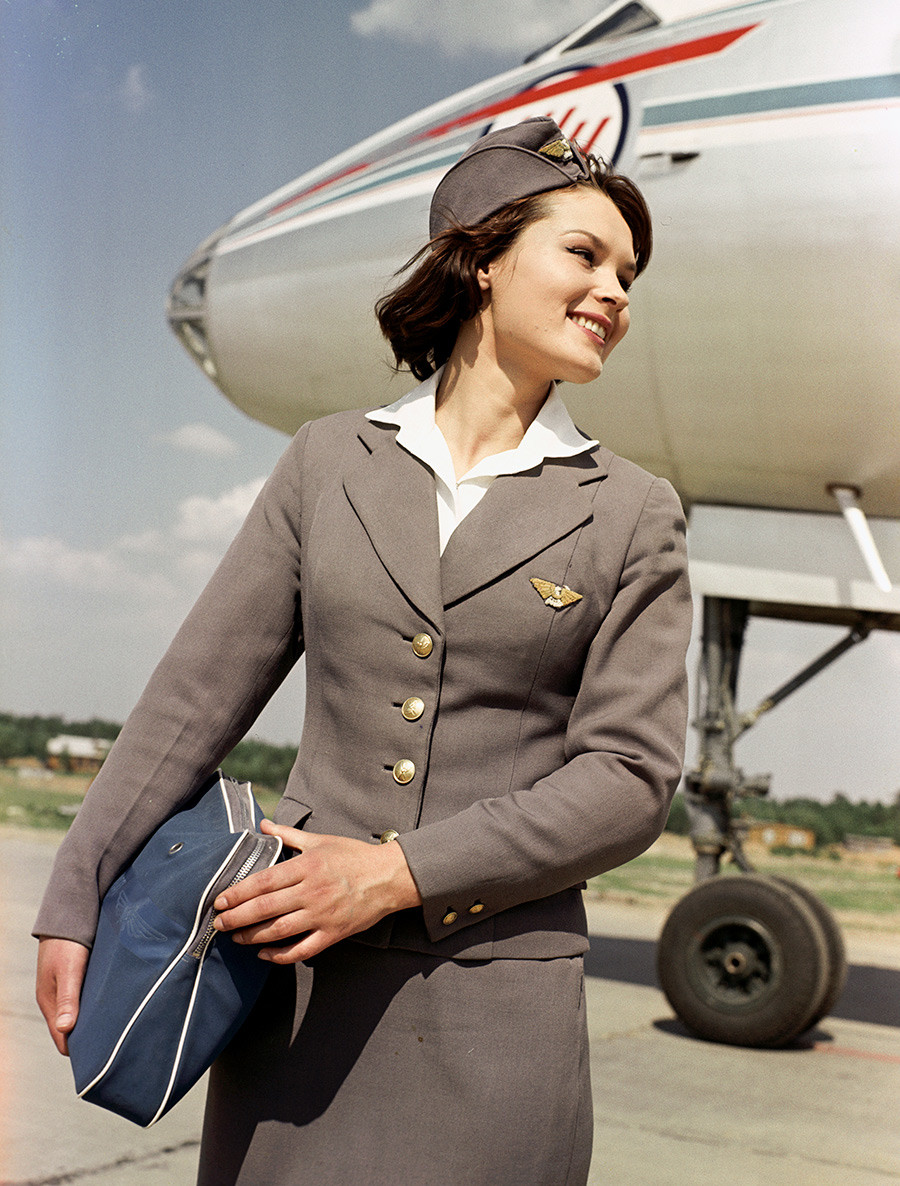 If Beth Harmon was a real person flying from the U.S. to Moscow in 1969, her flight attendant would have looked like this: 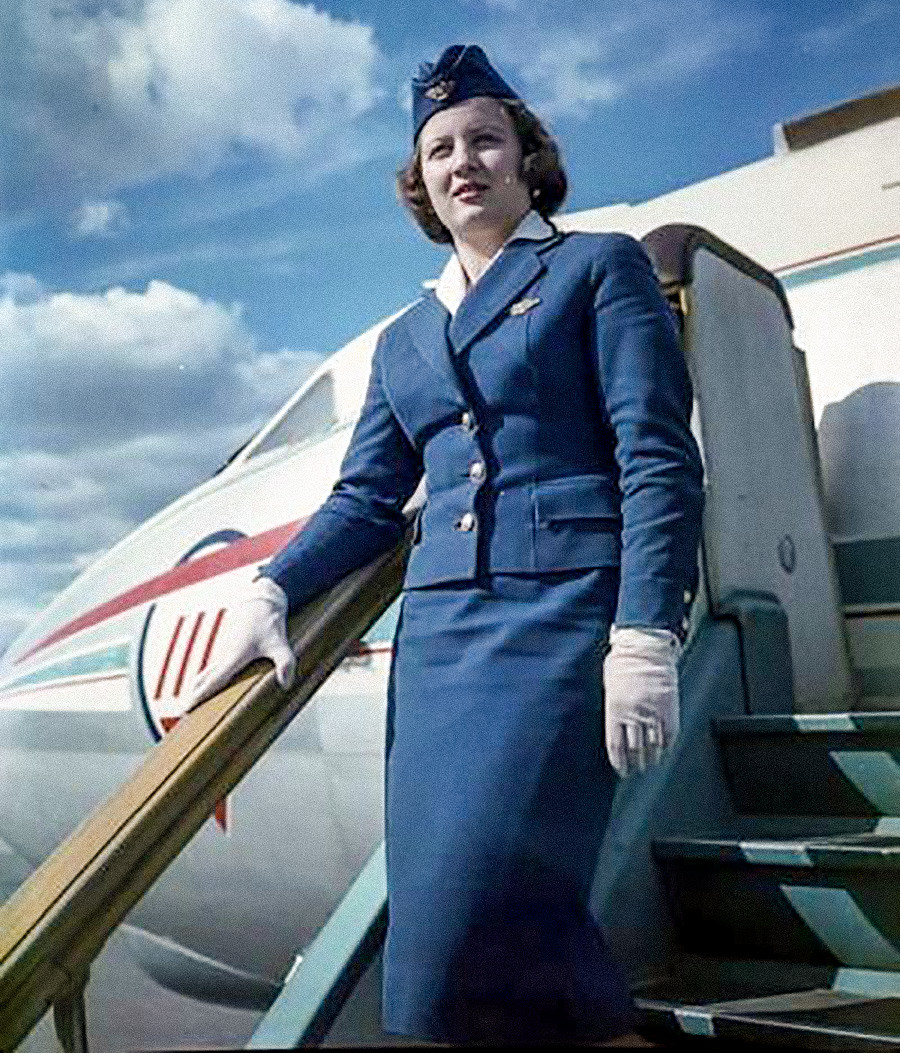 In the 1970s, the uniform became crimson, but the hat remained blue. 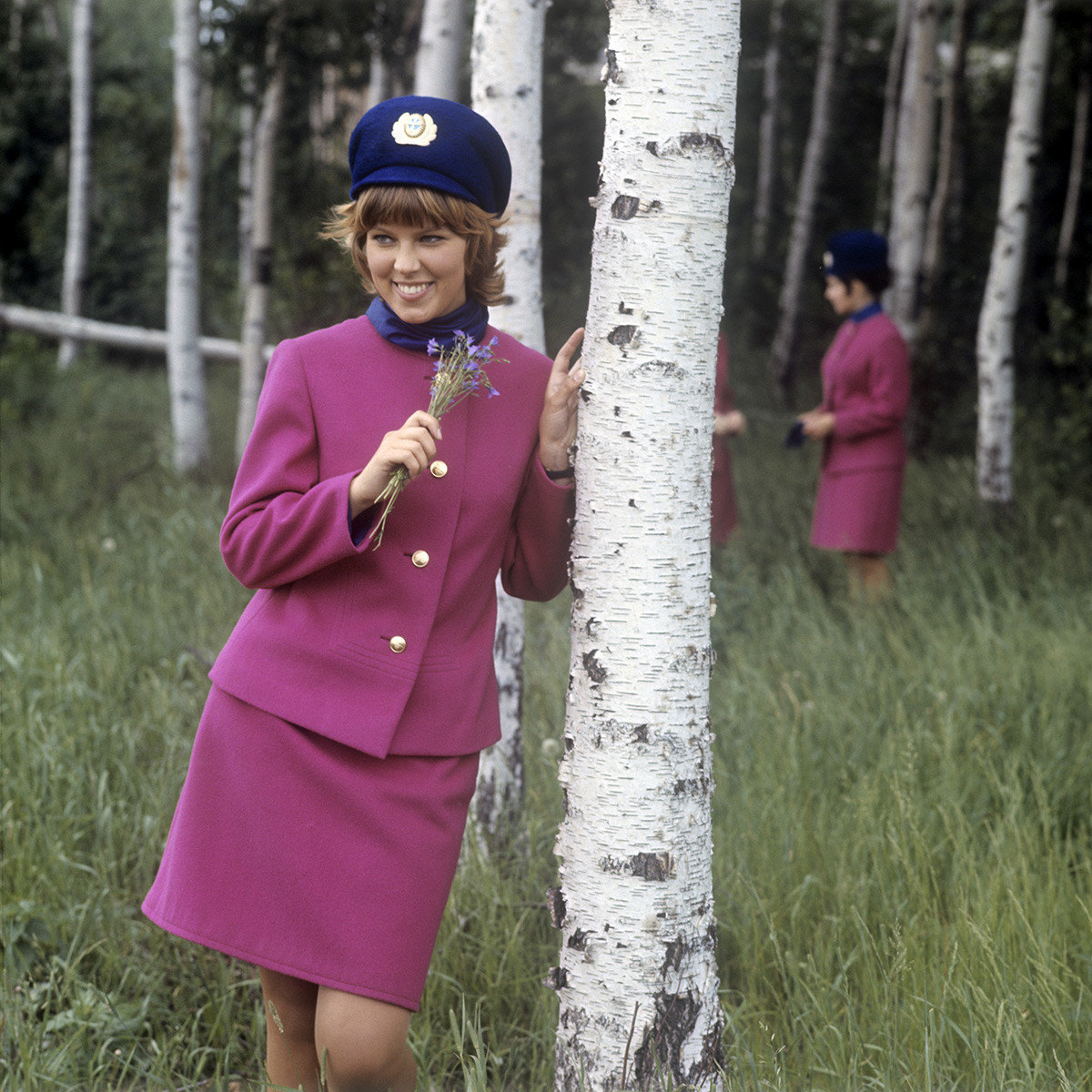 The first uniform exclusively made for the warm summer season was introduced in 1971. Short sleeves was the main feature of the new summer uniform (not pictured).

Yet another new uniform was introduced in 1975 and it was perhaps the showiest of them all. A blue dress with white stripes was complimented with a hat that remotely resembles the one you saw in ‘Queen’s Gambit’ (Click here to see the photo).

...or has no resemblance at all!

At the end of the 1970s, it was changed for another, not so flashy, uniform. 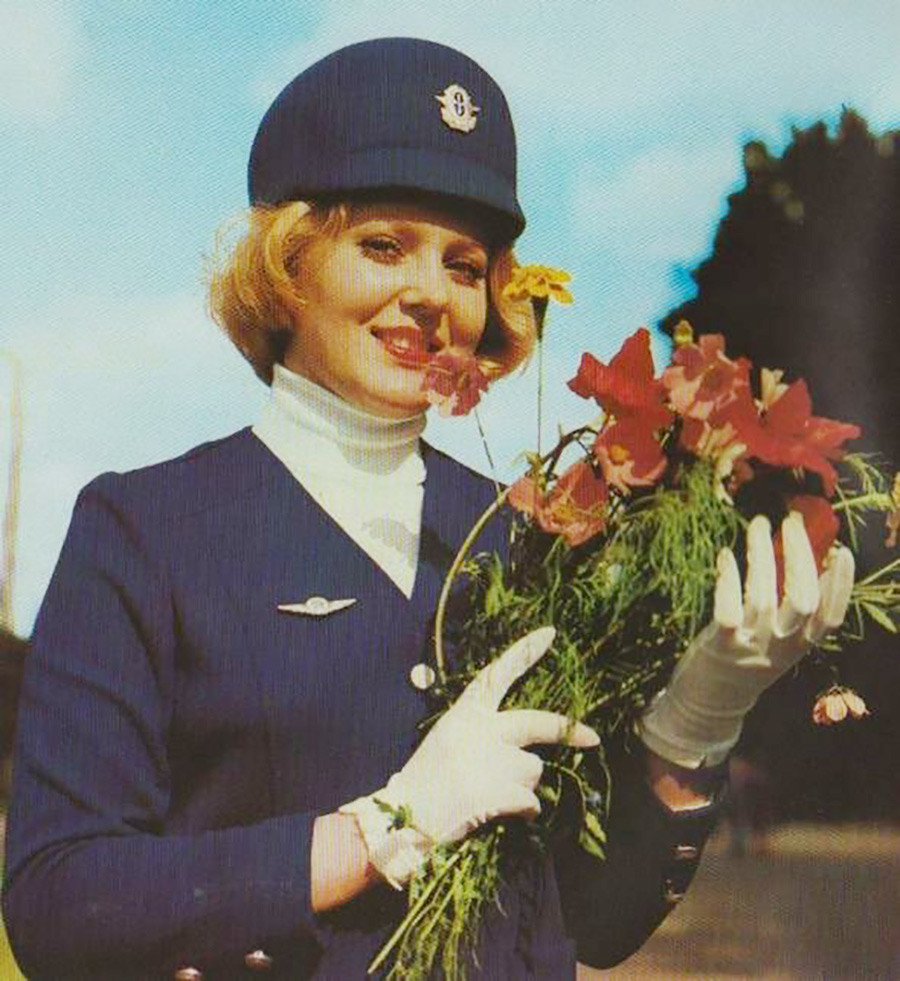 Just before the Olympic Games held in the USSR in 1980, Soviet stewardesses received a revamped uniform that resembled the showy uniform of 1975 (Click here to see the photo).

A renewed summer uniform was also introduced in the 1980s (Click here to see the photo).

1986 was the year the uniform of Soviet stewardesses was updated one last time. A blue dress came with red scarves and hats, while the summer uniform consisted of a blue dress and elegant white gloves. 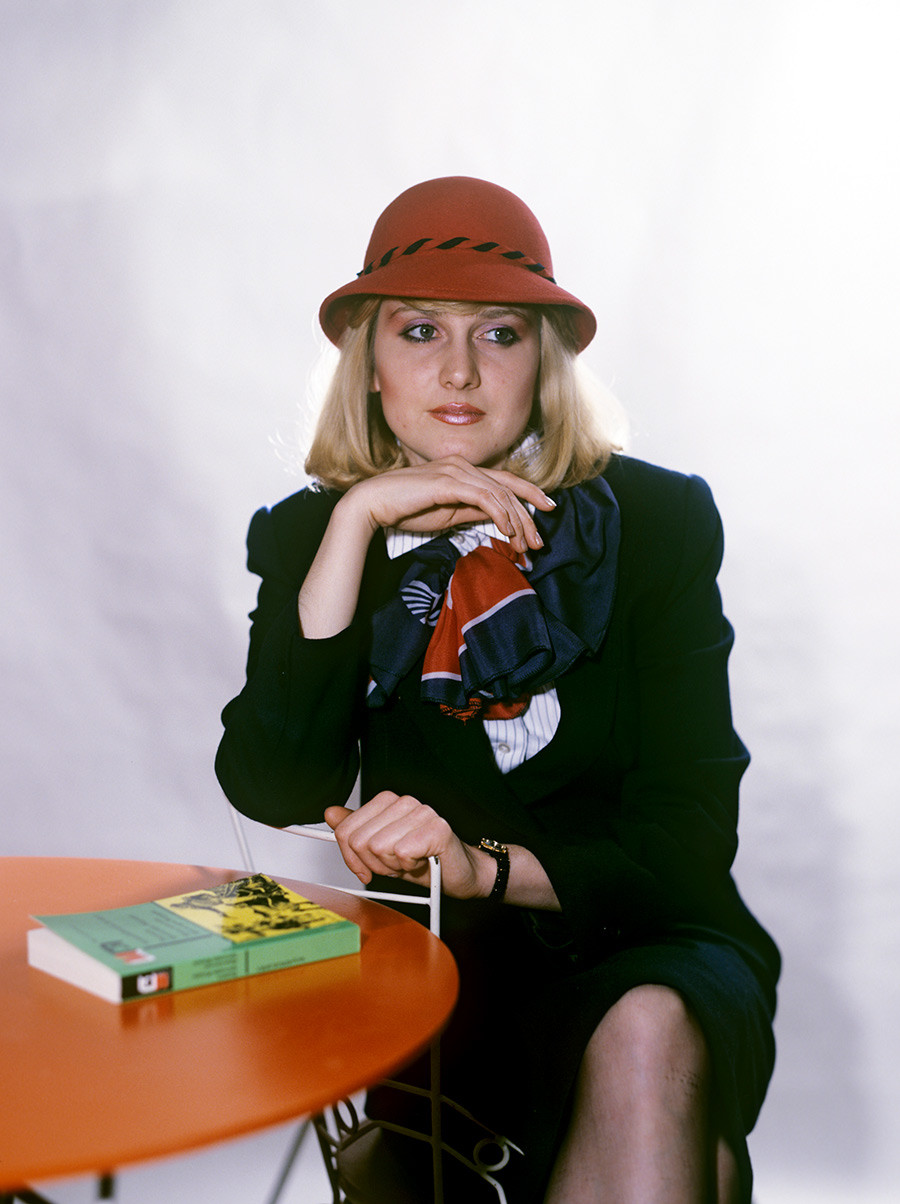