This bear made a Russian airfield his home 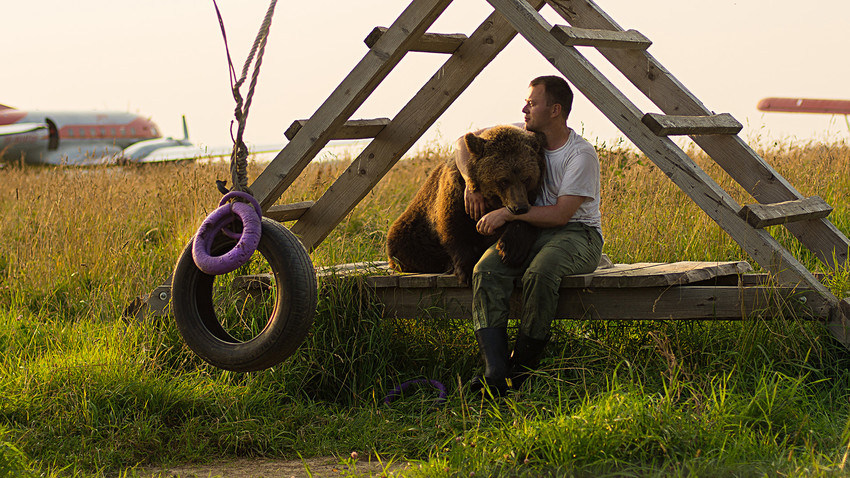 Andrei Ivanov
Mansur loves riding trucks, counts pilots among his best friends, and has even flown on board a plane himself. Oh, and he’s a bear.

Once upon a time, there was a little bear cub who turned up at Orlovka airfield in Russia’s Tver Region. No one knows exactly how he got there, but a good guess would be that he lost his way in the woods when out with his mother. Whatever the case, and despite the danger, his hunger made him approach a human settlement. But far from chasing him away, the pilots took him in. They gave him food and shelter, and then thought about what to do next. First, they named him Mansur, which in the Altai language means Misha (short for “teddy bear” and Mikhail in Russia, as the owner of the airfield was originally from Altai). At the airbase, he quickly made new friends. Closest of all was his relationship with pilot Andrei Ivanov.

Saved for the second time 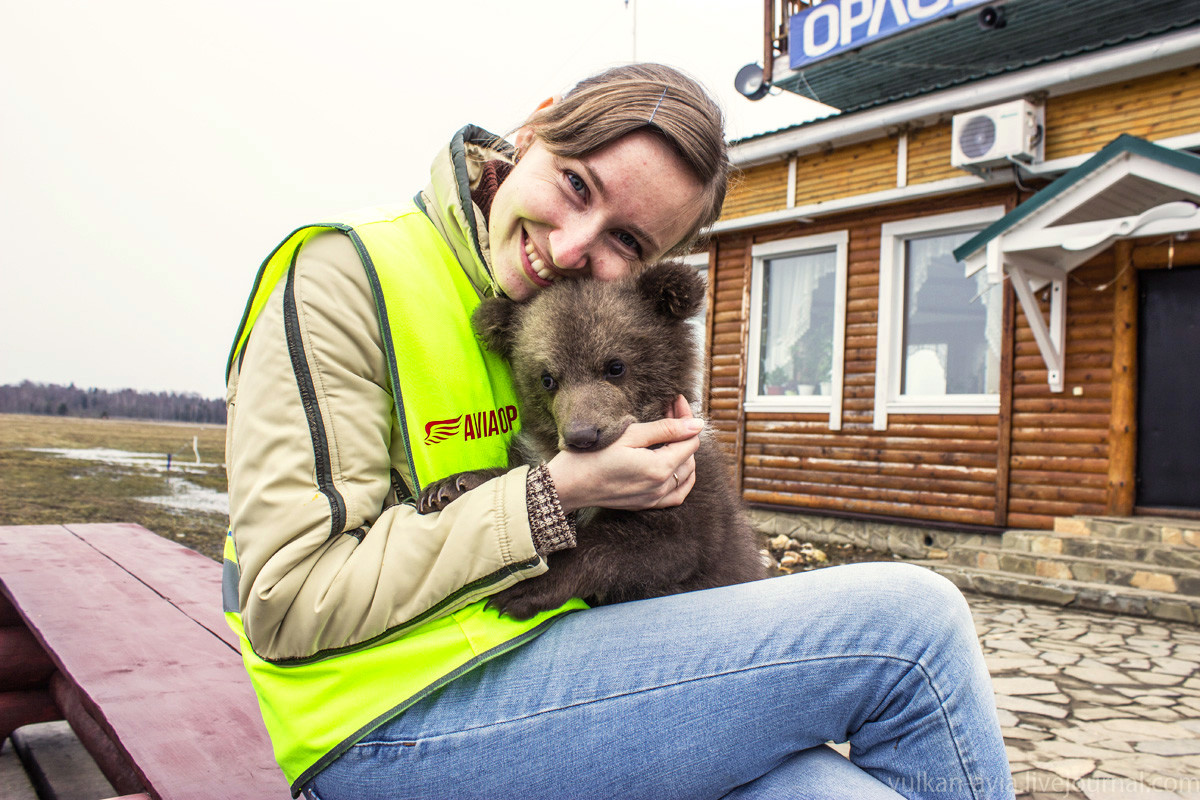 “Sure, we didn’t plan to get a pet bear. He just appeared at the airfield out of the blue,” Andrei recalls. “He was small, the size of a puppy, needed feeding from a baby’s bottle. He was like a toy. For the first year, cubs can be really cute.”

No one knew what to do with him. Returning him to the forest at that age would have been a death sentence. He didn’t even know that bears are supposed to sleep in winter. “The first winter, we had to keep him warm. He didn’t know what was happening with his organism,” says Andrei. “He used to fall asleep on my lap.” 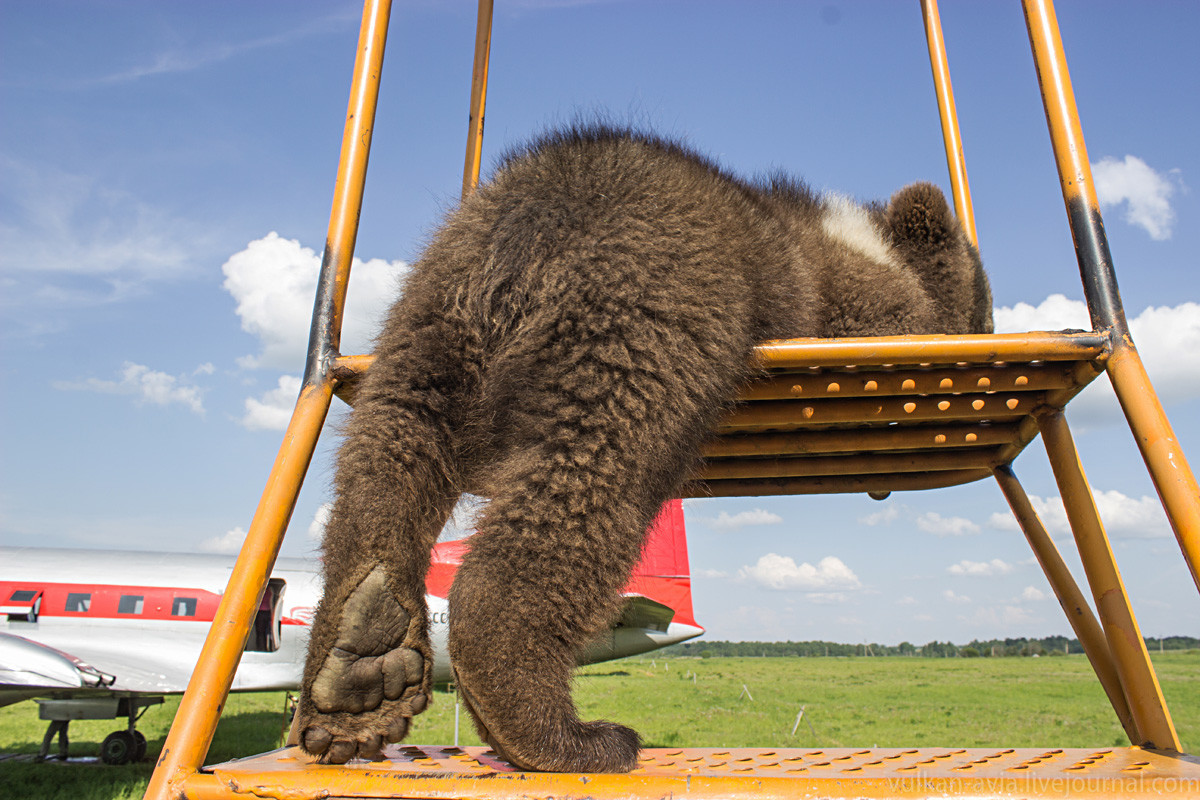 Then the aerodrome workers decided to ask for specialist assistance. The Ministry of Natural Resources and Ecology for Tver Region put them in touch with an expert who was supposed to transport Mansur to the Seliger Reserve. But instead of the reserve, he was taken to a training facility where dogs are taught to track down bears. When Andrei and his friends found out and came to rescue him, Mansur was literally jumping for joy. “It’s good that we made it in time,” says Andrei. “Fortunately, he never found out what fate was in store for him there.” The owner of the training facility handed the bear back without quibbling. 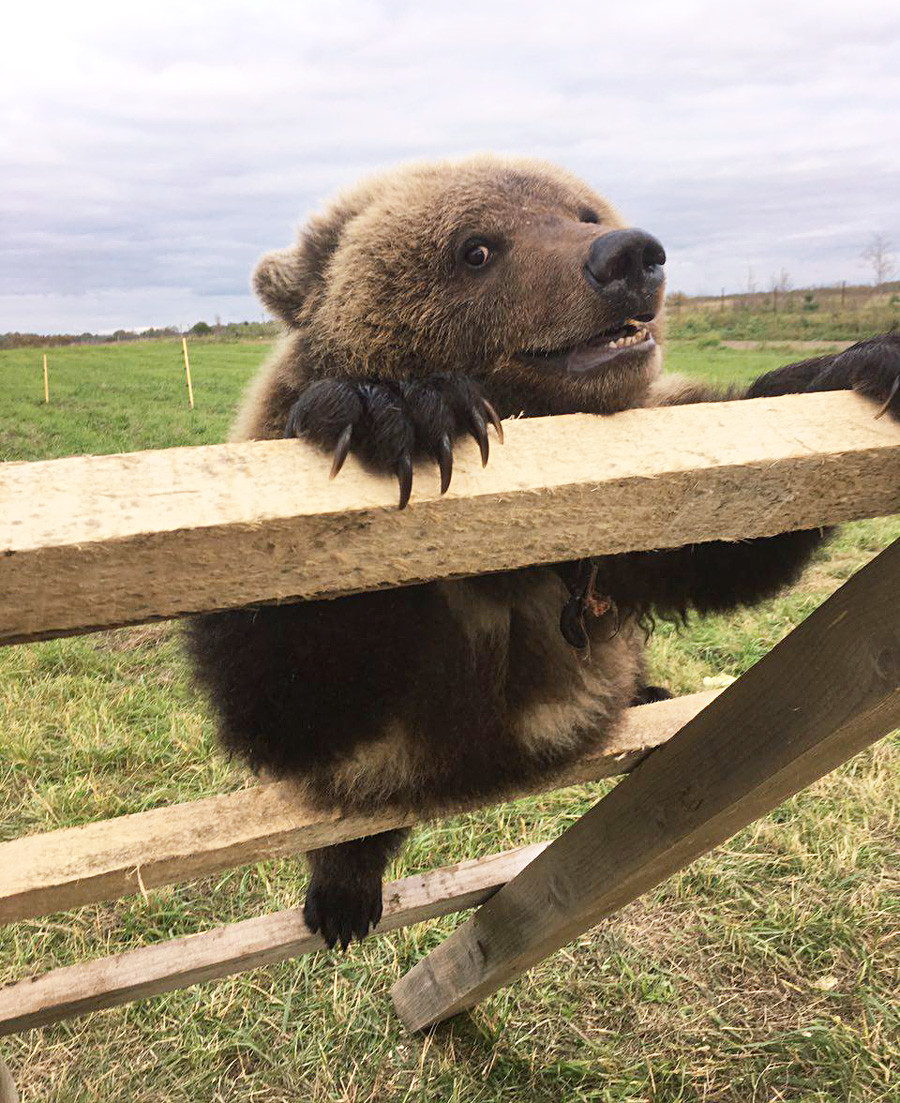 Mansur was taken back to the airfield because there was nowhere else. The pilots also talked to the Pazhetnov family, who are known for rehabilitating orphaned cubs. But they informed them that Mansur was too domesticated, and it was now too late to release him back into the wild.

“When a bear accepts a person as a friend, he’s no longer afraid of him,” explains Andrei. “It would have been possible to return him to nature by the end of the first year, and he would have survived perfectly well, but after a certain period of time in the company of humans, it’s impossible. He’d search for people. And if he entered a village, he’d be shot for sure.” 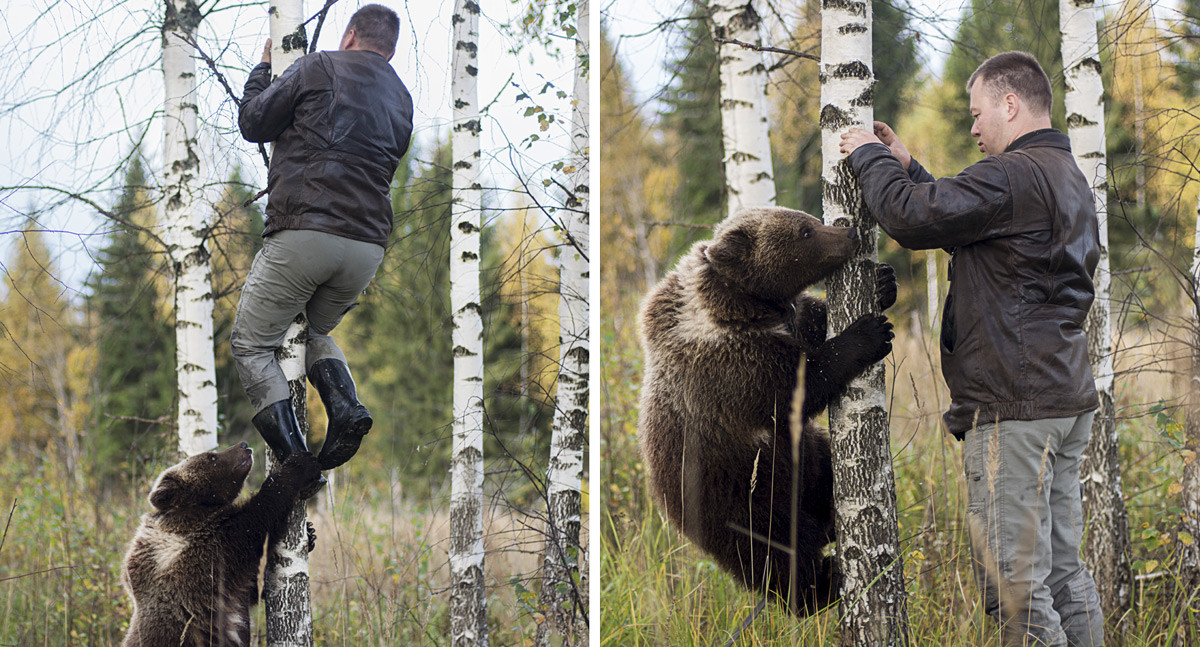 And so destiny decreed that Mansur would remain at the airfield. Only the problem was that he was getting bigger, and there was no longer enough space for him at Orlovka. A suitable place was eventually found in Kaluga Region at the huge Oreshkovo Airfield, which was able to replicate Mansur’s now habitual environment of forest and planes.

Crowdfunding helped build an open-air enclosure. Russians touched by the bear’s story contributed over 4 million rubles ($63,000). The result was a large, safe area inside a real forest, where Mansur could look for ants, climb trees, and even go for a swim (the previous summer he'd had to be watered down with a hose). 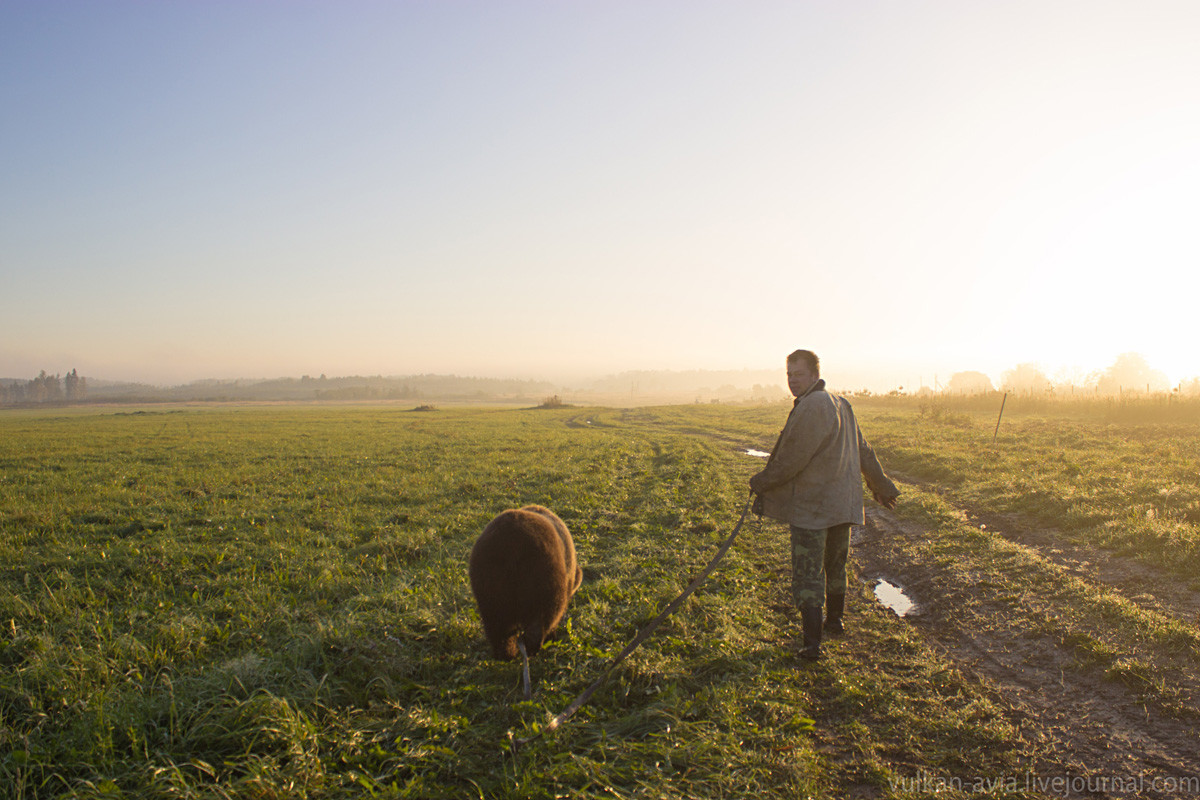 Mansur quickly settled into his new home. There are always people at the airfield – guards, pilots, and, Mansur’s favorite, women who feed him. And, of course, there’s “dad” Andrei, who often visits.

“He’s a healthy adult bear. He weighs 250 kilograms and stands 2.5 meters tall, quite large for a three-year-old. And he’s always wanting to play!” says Andrei. “But before I go and see him, I always try to find out what mood he’s in. If he’s calm, you can communicate with him, but you mustn’t impose yourself on him. He can sometimes go over the top when playing, and that’s the time to stop.” 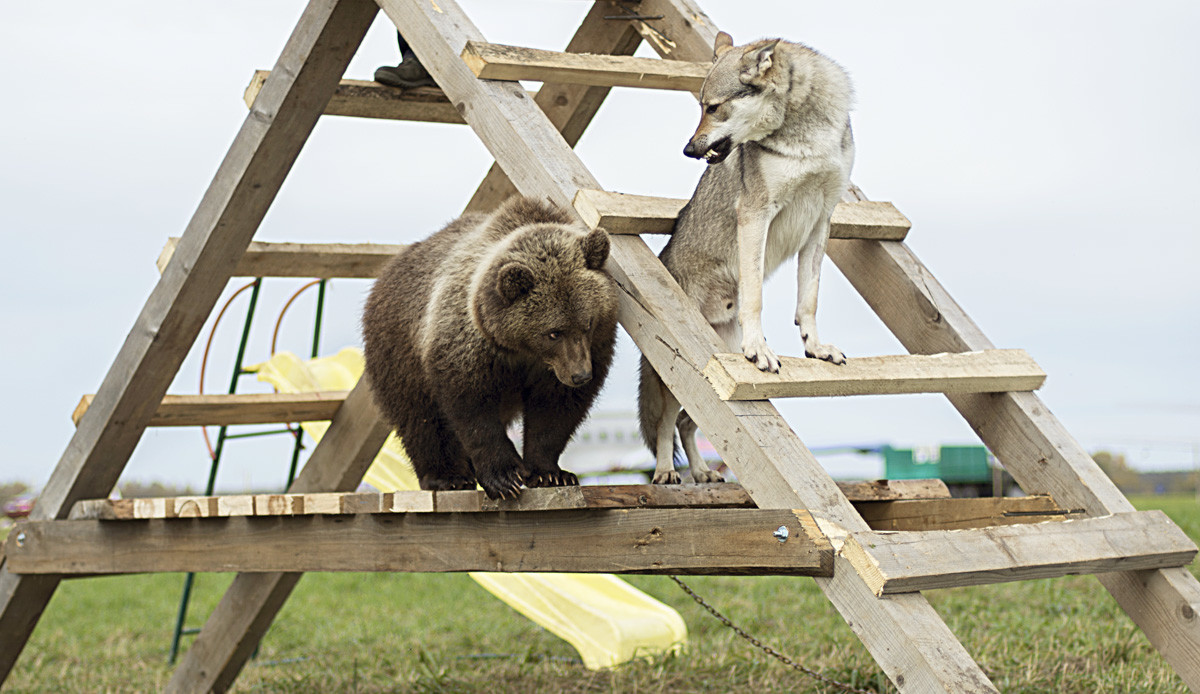 The pilots consult both the Pazhetnovs as well as specialists from Moscow Zoo. Their advice is not to use force. When a bear is small, a person is stronger. But he’ll remember how you overpowered him and later pay you back in kind.

“As far as I know, bears that attack humans have usually been mistreated by people,” says Andrei. “We sometimes find grapeshot in their paws or head. It means they were shot, often in the back.” 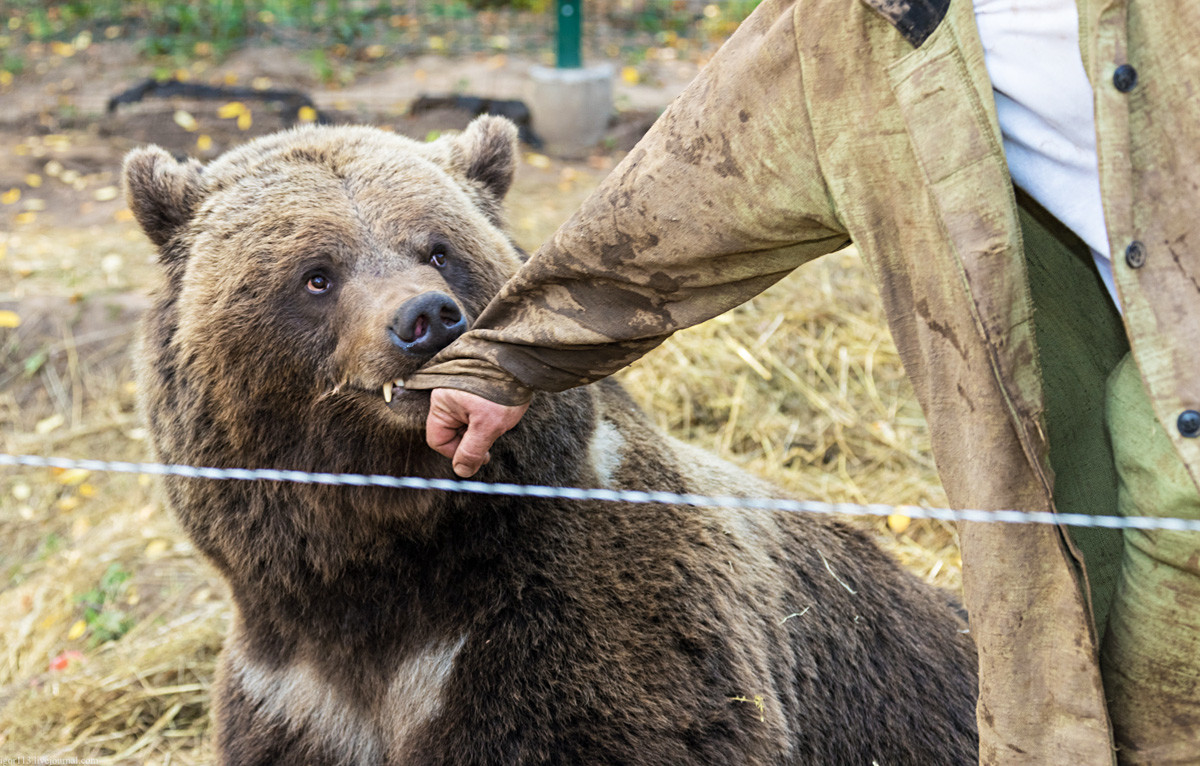 “A crew of helicopter pilots from Magadan Region told how several years ago they noticed two people in a boat – both wounded by a bear,” recalls Andrei. “One died on board, the other said they were poachers who’d shot a bear while it was fishing. They’d only wounded it, mind. When the river doubled back, the bear saw and attacked them. It hadn’t forgotten.”

So the airfield workers try to communicate with Mansur as an equal – no one tries to train him. “A bear isn't a pet. He has his own opinions and desires. It’s possible to reason with him, to attract his interest somehow, just like a person,” explains Andrei.

All the same, the bear’s life at the airfield is very different from in the forest. Mansur is interested in technology. While still a cub, he started climbing over the planes, and the pilots even took him for a ride in the cockpit, but he was frightened. Bears are generally shy animals, albeit highly curious. 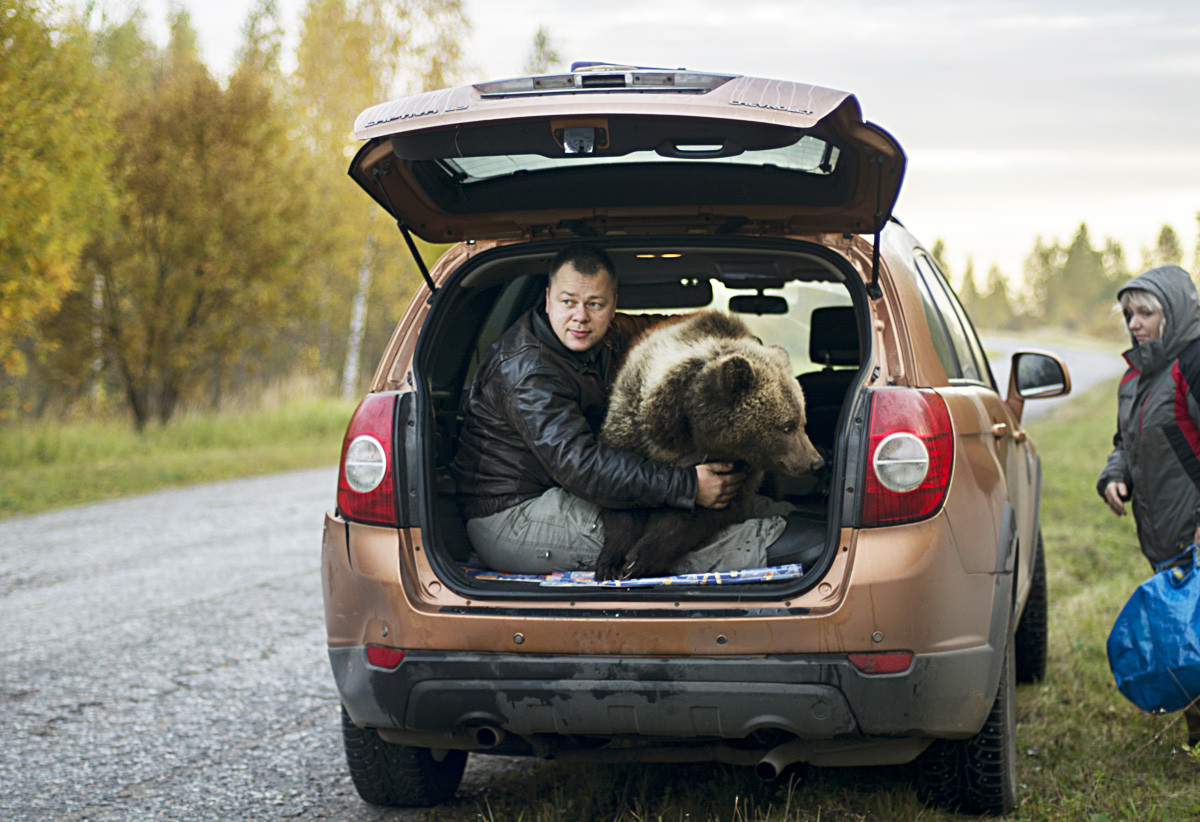 “When we started to steer, he got scared, climbed onto my knees, stuck his face out of the window, and hugged my neck with his paws. I then felt something warm and soft and, yes, rather smelly. Fear really does make you sh… you understand,” Andrei laughs. “But five minutes later, back on land, he was running around like nothing had happened. We decided not to scare him anymore.” Riding in cars, however, he simply adored. Once inside, he was almost impossible to pull out. At the sight of a truck, he would rush towards it and paw at the door handle. 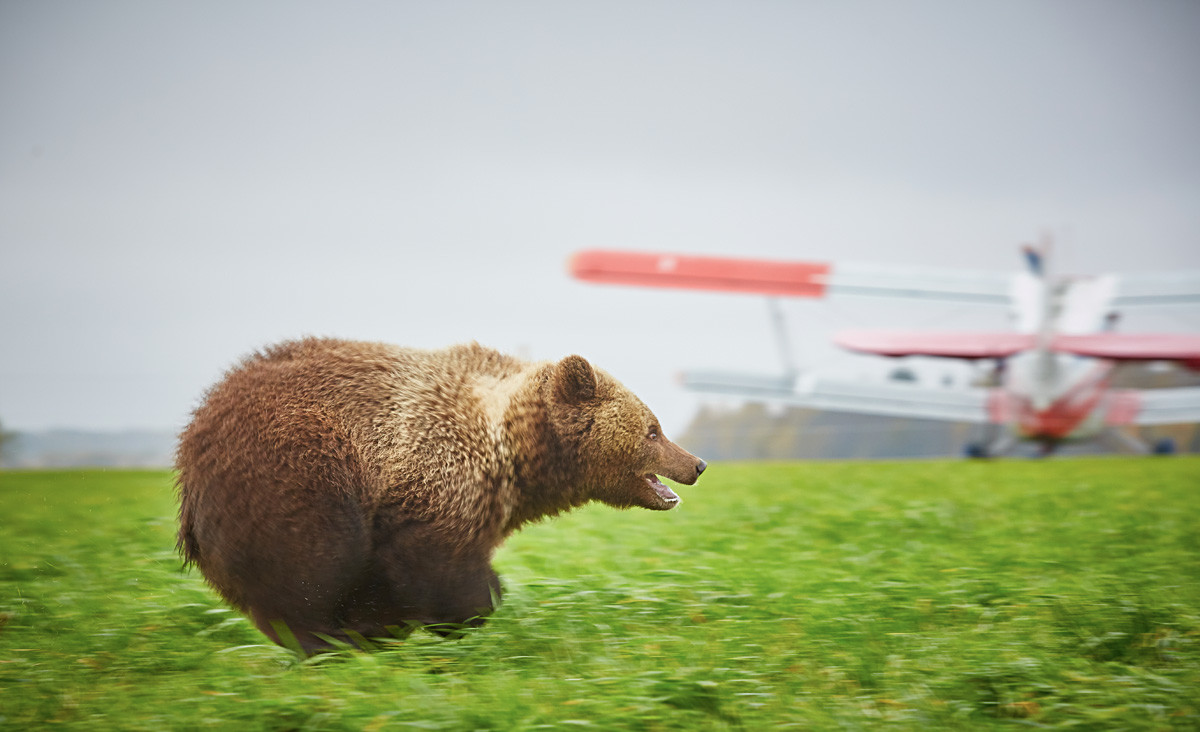 Mansur didn’t even hibernate last winter. “Although the experts couldn’t give us a reason why, they said there was nothing wrong,” says Andrei.

Until recently, anyone who wanted could come and see Mansur, but so many visitors turned up that the aerodrome staff had to limit the numbers so as not to irritate him. Besides, some fed him unhealthy food. “People lined up outside like it was the Mausoleum or Moscow Zoo,” Andrei explains. “We decided to allow visits only if people helped out at the same time, like a subbotnik (‘Saturday cleaning day’). That way they did something useful and got some face time with Mansur.” 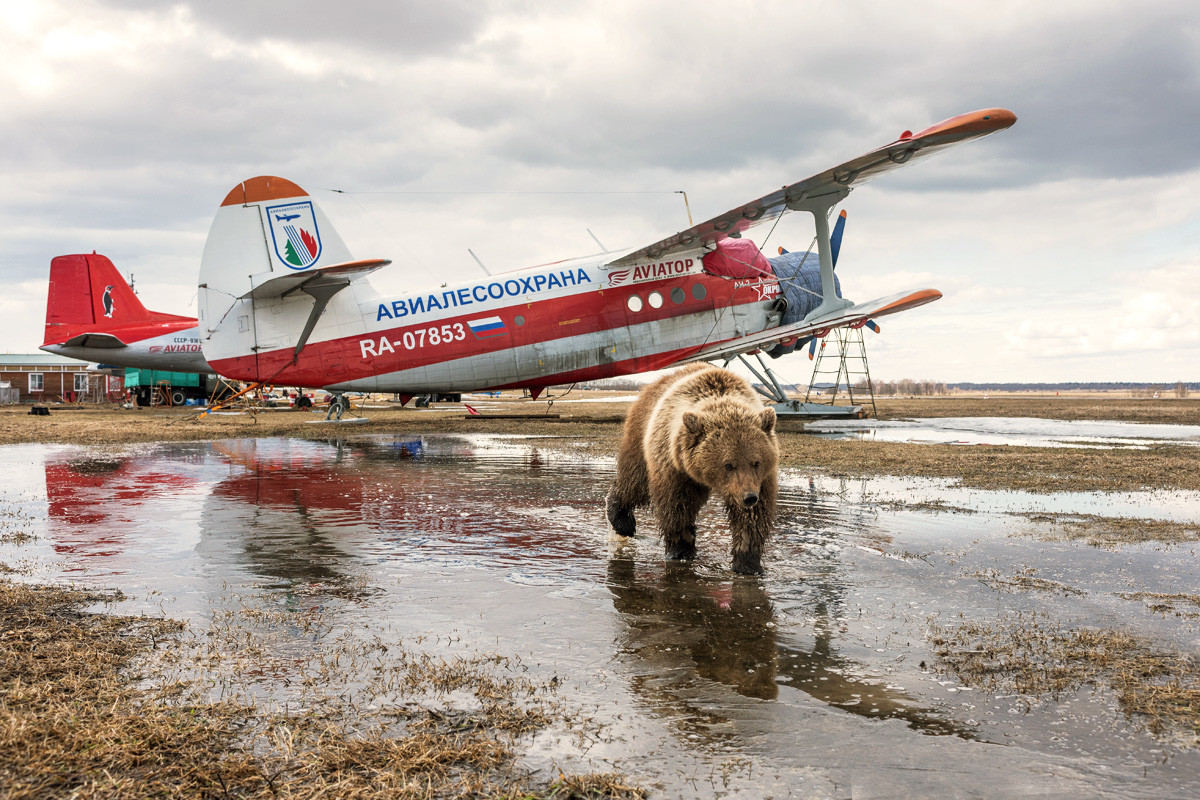