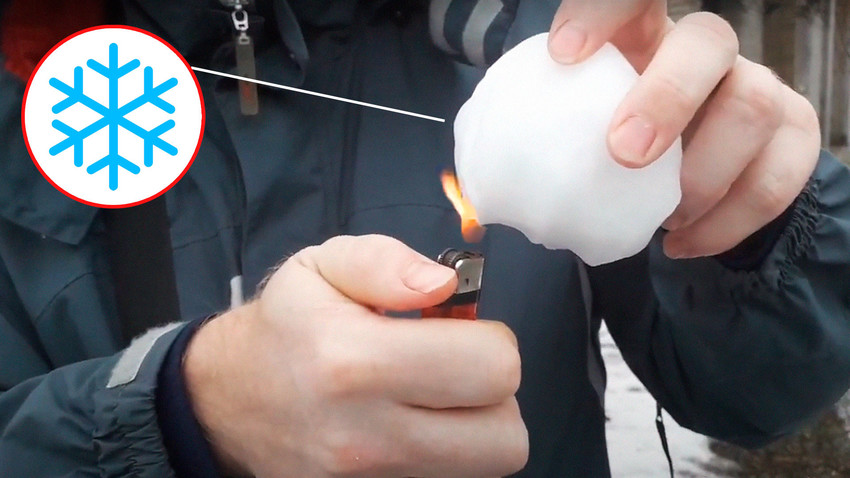 Nikolai Super/YouTube
A new challenge has swept through social networks: Russians setting fire to snowballs and being surprised that they don’t melt, so they conclude that the snow is plastic. On the contrary, it’s all about physics.

The snow challenge began in southern Russia in Krasnodar Krai. Snow is not a regular phenomenon there and usually it melts very quickly. This year, winter in Russia has been colder than in previous years and some locals decided to find out why the snow in their region does not melt.

The video, published by the ‘Typical Krasnodar’ Instagram account on January 12, shows a man, who rolled a snowball in his yard, holding it over a burning kitchen lighter. He holds it for quite a long time, around 40 seconds, but the snow doesn’t melt, just chars. “What should snow do? Melt,” says the man and adds that it’s probably all because of chemicals in the snow.

His video immediately got many views. Other residents of the region also tried to burn snow at home. “This is not a joke. It smokes, but not a single drop falls on my hand, it really feels like plastic,” comments a Krasnodar local about his snow experiment.

The amazing physical properties of snow also aroused interest in the neighboring Rostov Region. “We watched a video from Krasnodar where their snow does not melt and also decided to check,” the lady comments on the video. “It stinks like a plastic bottle being burned. Well done, chemtrails.”

The snow challenge was repeated in Volgograd, also in the south of Russia. “After watching the video from Krasnodar and Rostov, seeing that their snow is plastic, we decided to make the same experiment in Volgograd,” says the woman, who makes a snowball and burns it with a lighter. “Yes, indeed, the snow doesn’t melt, it does not even drip, it melts like an ordinary plastic bottle.” The smell also didn’t impress the locals and the woman concludes that they have “plastic snow”, too.

In fact, this experiment can be very easily explained: A snowball is compressed snow, and it has a high thermal conductivity. Not a single drop will fall from it until the entire snowball approaches the melting temperature, making the impression that the snow doesn’t melt. A soot and a “plastic” smell appear on the snow, because of the gases from the burning lighter. “If you studied physics badly in school, your life will always be filled with magic!” This is how other Russians reacted to these videos.