The most UNUSUAL types of ice found in Russia (PHOTOS) 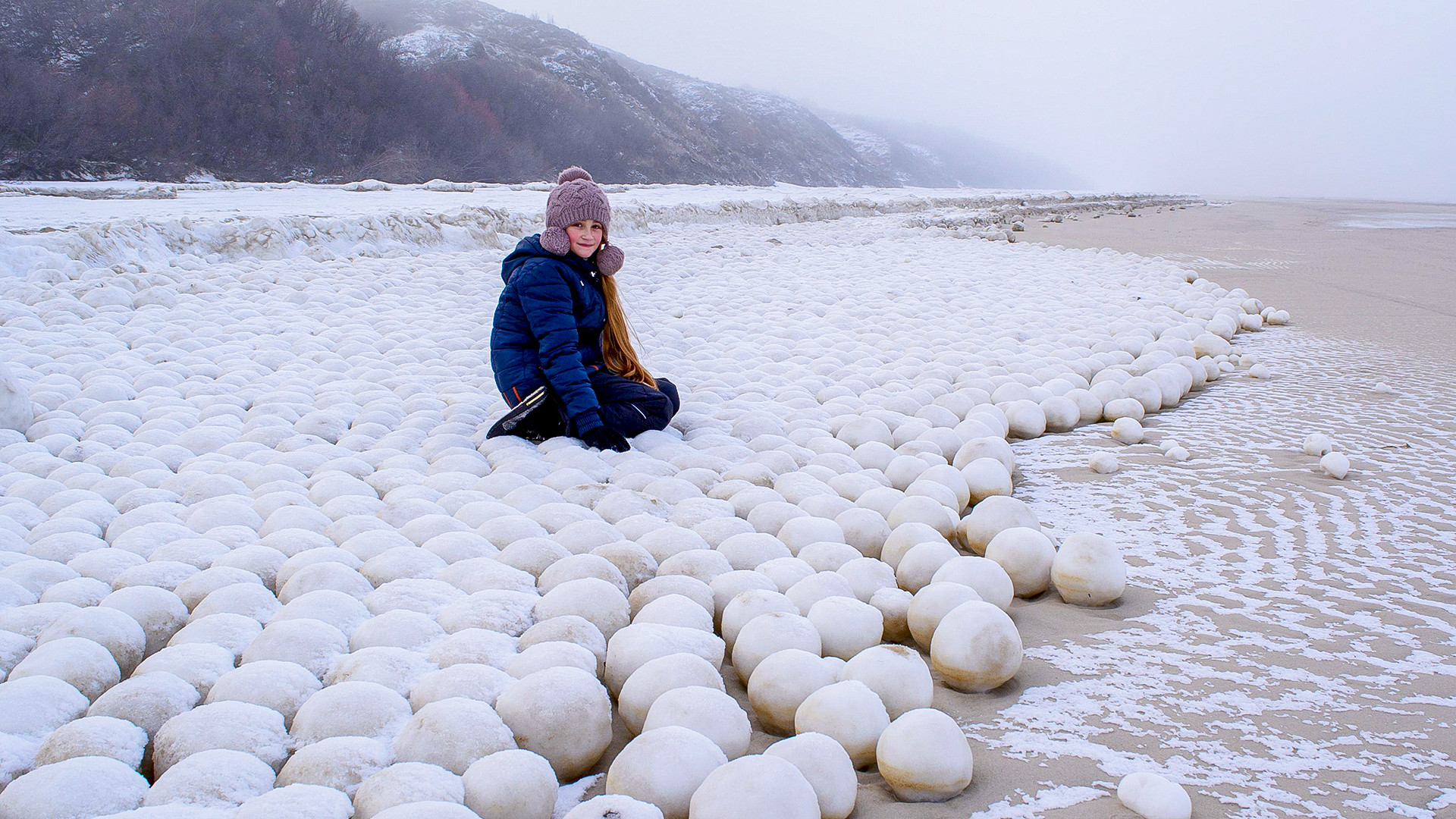 Evgeny Chikotilov/TASS
Did you know that ice in the sea can literally take the shape of cylinder balls, or that you can come across ice “flowers” on lakes?

Ice is not just frozen water. Sometimes nature performs real miracles with this substance. For example, the Gulf of Ob in Yamal and the Gulf of Finland in Leningrad Region produce giant ice balls, while mysterious ice circles appear on the surface of Lake Baikal every spring. 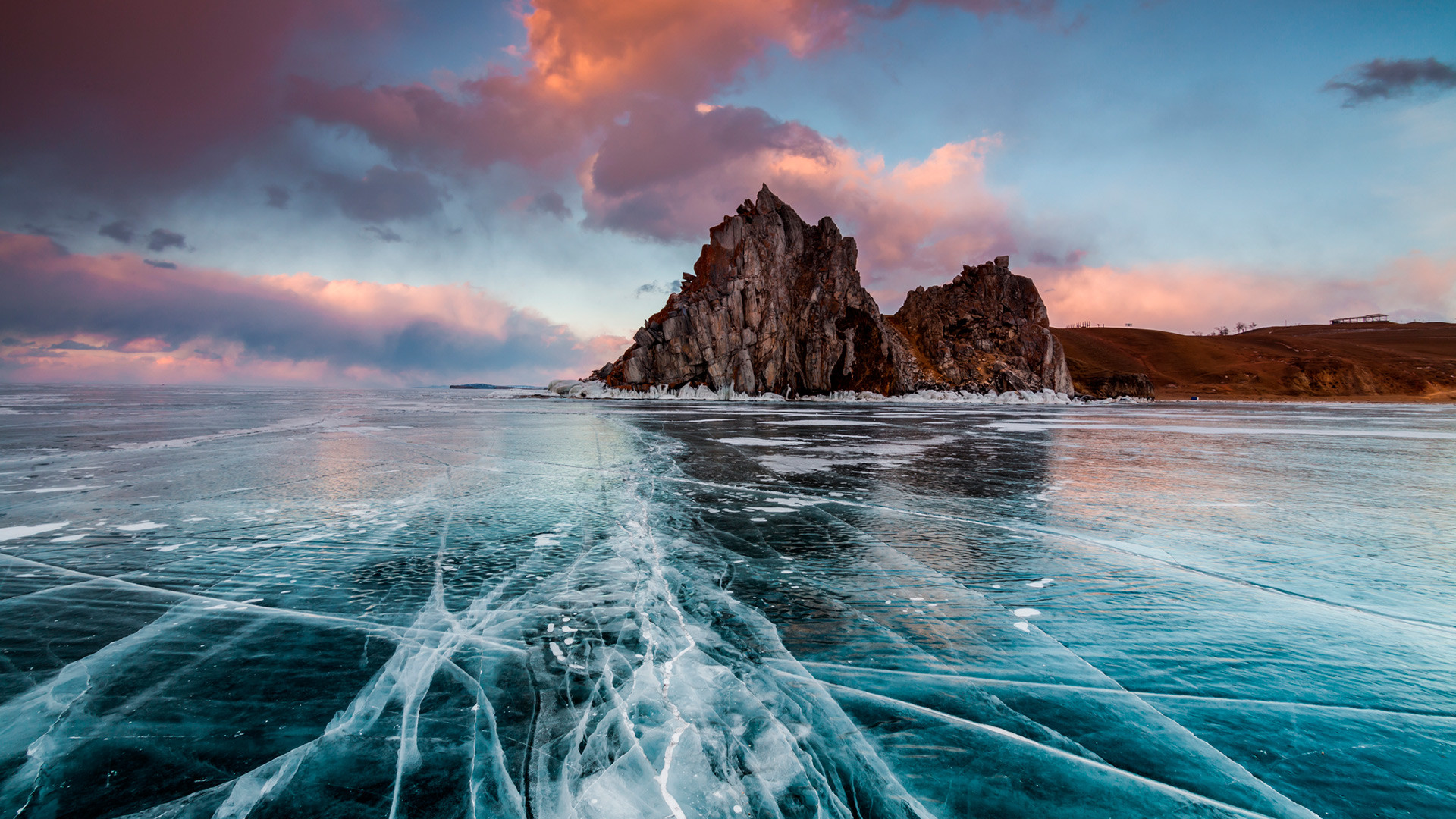 Colorful sunset over the crystal ice of Baikal lake./Legion Media

We discussed these and other ice wonders with Nikita Tananaev, a hydrologist and leading researcher at the Permafrost Institute in Yakutsk.

The most interesting types of ice can be found on water, because their formation is influenced by numerous factors, from the current to the temperature. They affect the safety of sea navigation and, therefore, the different types of ice are fairly well studied and described in the Ice Atlas, published by the Russian Arctic and Antarctic Research Institute. 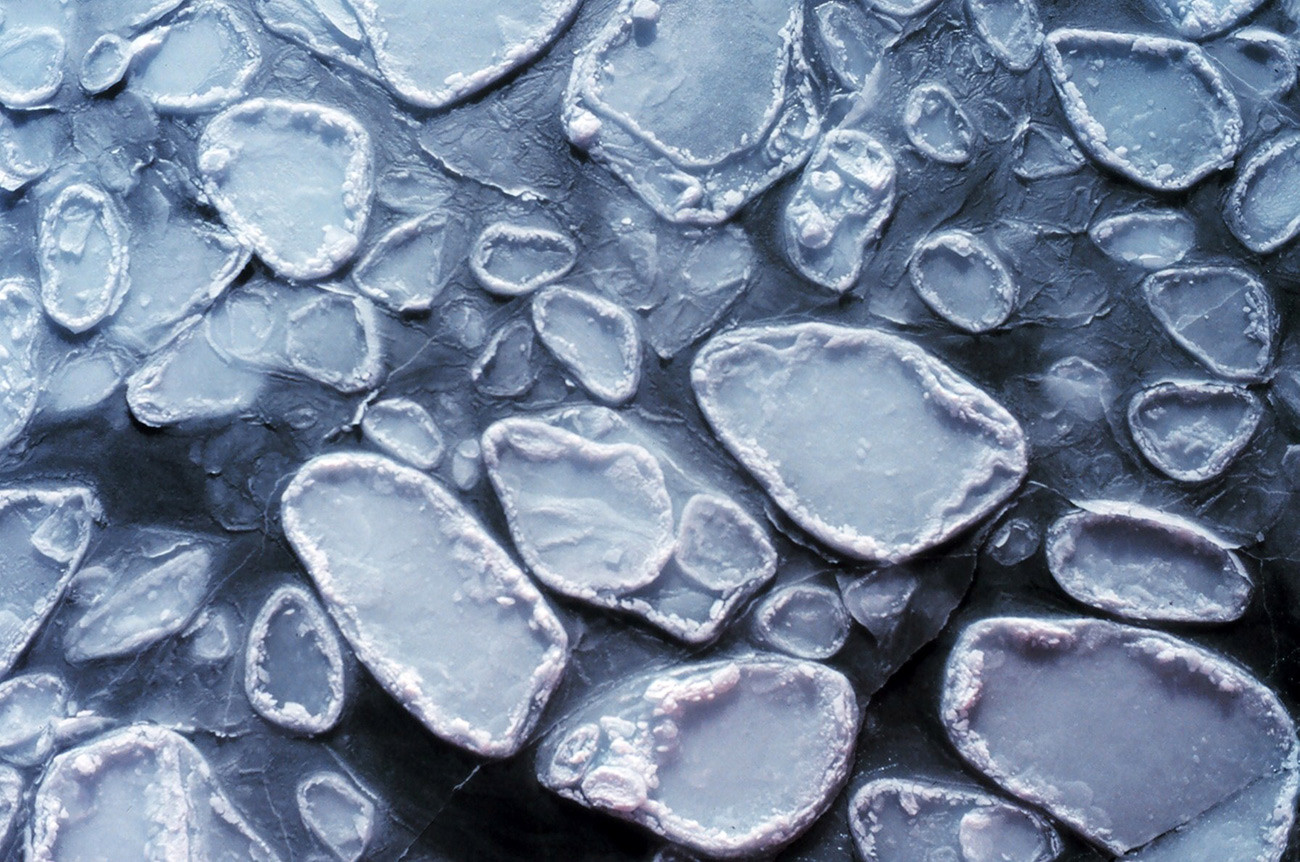 In winter and spring, lakes and seas across Russia are often covered with round pieces of ice with elevated rims, several tens of centimeters in diameter, known as ‘pancake ice’. (more info can be found here)

“Pancake ice is a common occurrence on large open waters, lakes or seas, especially in the north. These serve as ‘pans’ on which nature bakes its ice pancakes,” Tananaev explains. Pancake ice forms when the temperature fluctuates around zero and there are minor ripples on the water. “First, a thin oily crust begins to form on the turbulent water, known as frazil or grease ice, it then forms into round shapes due to surface tension. Sometimes pancake ice forms from needle ice or accumulations of fresh snow (slush). They are sometimes also called ‘ice ballerinas,’ because they spin in the wind,” he says. 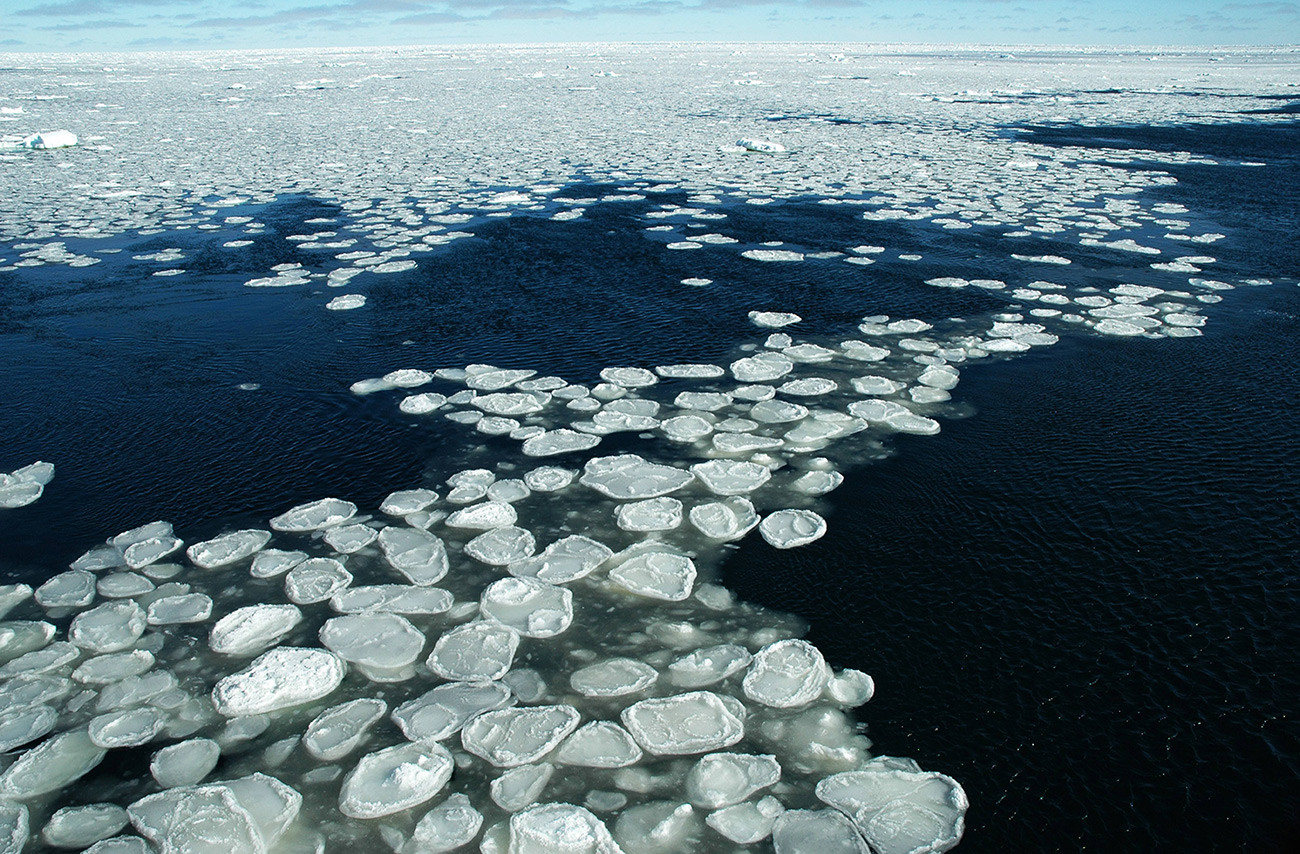 Pancake ice can be spotted, for example, on Lake Onega in Karelia, on the Iset River in Yekaterinburg and in Altai, as well as on Lake Baikal.

Ice pancakes can reach 3 m (9.84 ft.) in diameter and be 15 cm (5.9 in) thick. When the water freezes around them, they can cover the water surface as far as the eye can see. Sometimes, due to lower temperatures, ice floes do not have time to take a perfectly round shape, and end up looking like a multitude of fragments. This mutated form of ice is called ‘scale ice’. 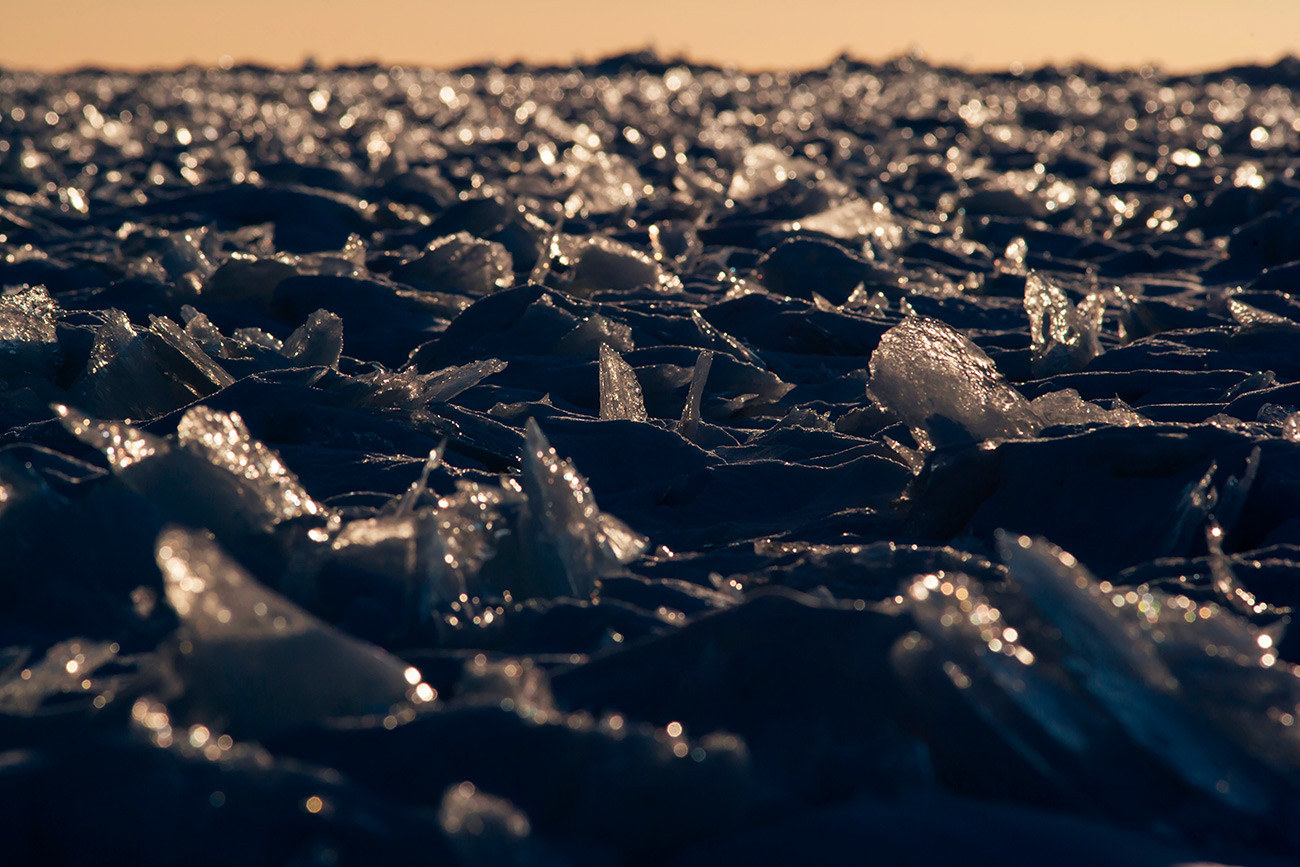 This incredibly beautiful natural phenomenon is more common in the Arctic, but sometimes it can be observed in lower latitudes, too. At the end of November 2019, ‘ice flowers’ appeared on Lake Ilyinskoye in Tatarstan and in Mari-El. 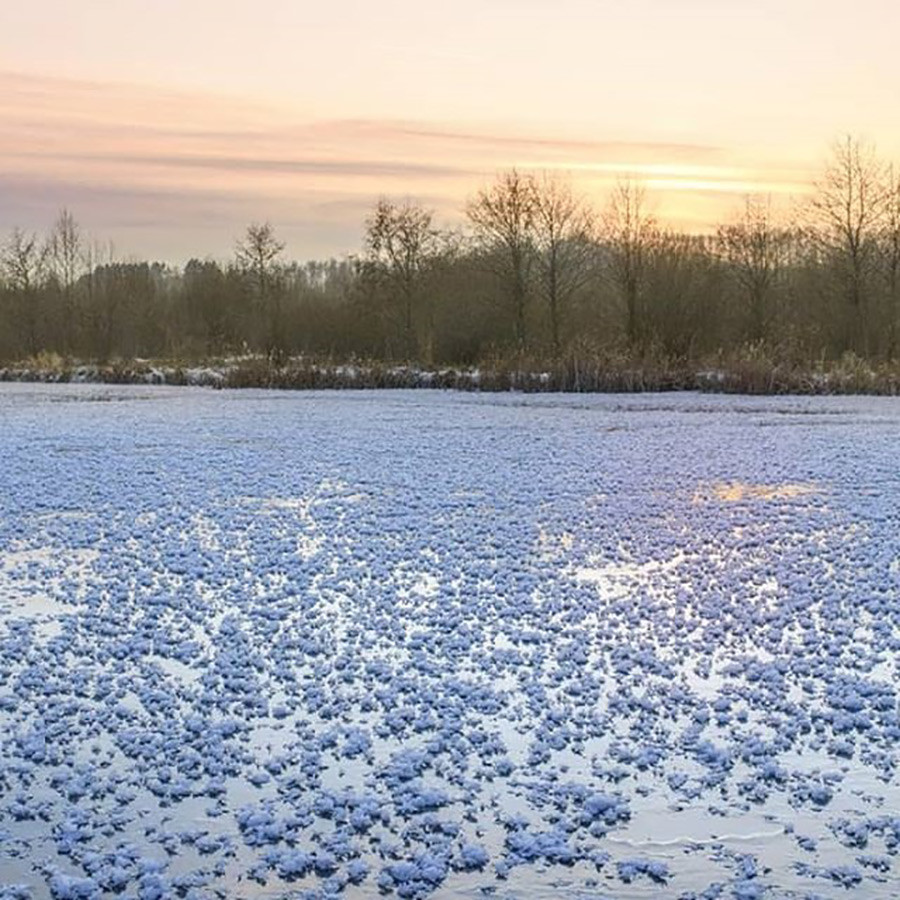 The lake in Tatarstan, November 2019.

The cause was a large difference in temperature between water and air (more than 20 degrees Celsius; 68ºF): the air temperature drops drastically, while the temperature on the surface of the water remains near zero and there is almost no wind. Moisture on the ice surface cools sharply and condenses on the surface in the form of crystals - similar to frozen dew in the morning, only in water. 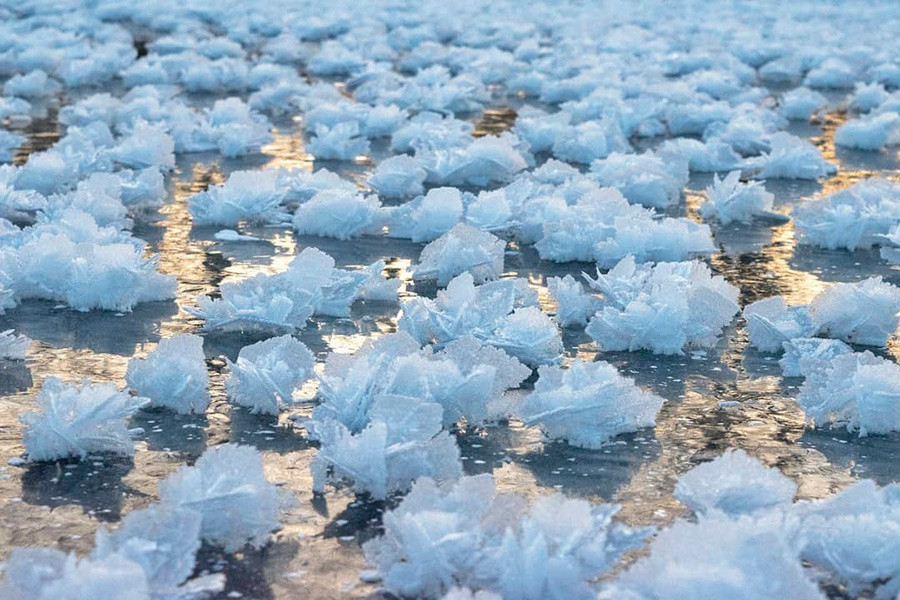 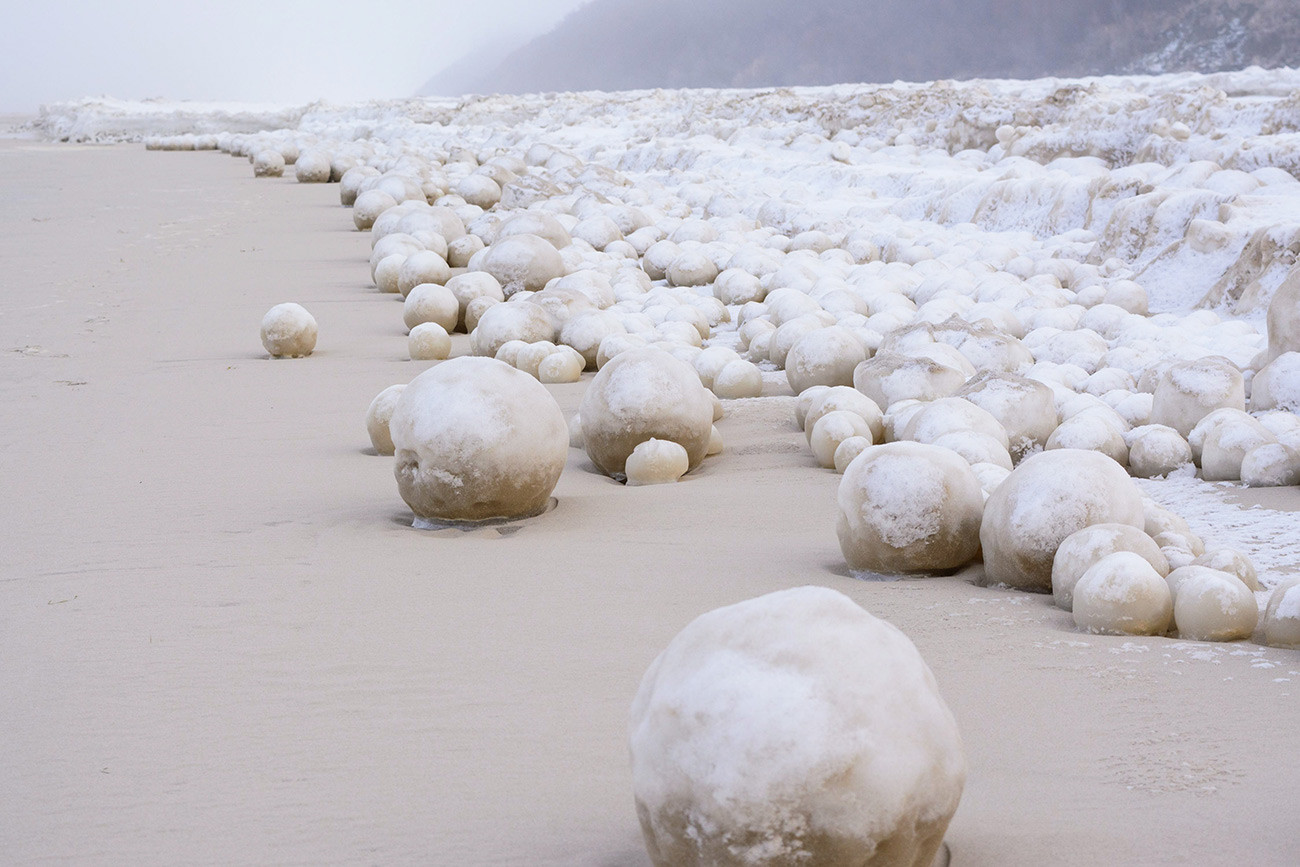 In 2016, this quite rare natural phenomenon presented itself on Yamal Peninsula, and a year later, in the Gulf of Finland. 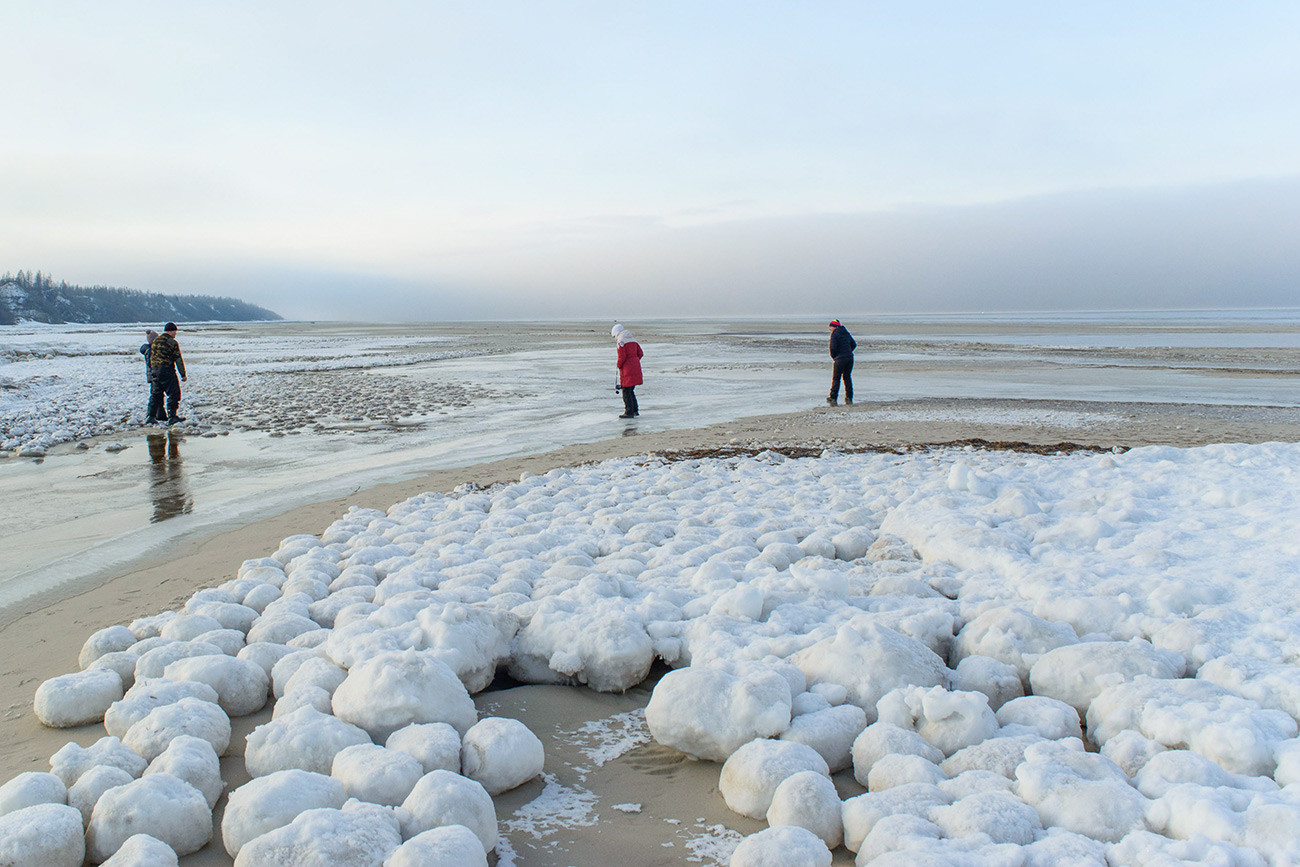 Huge balls of ice, which waves push ashore, usually form during a thaw after a snowfall and a strong storm. Sea waves roll lumps of snow along the shore, “making” snowballs, which are then covered in ice in a cold wind and pushed back ashore. 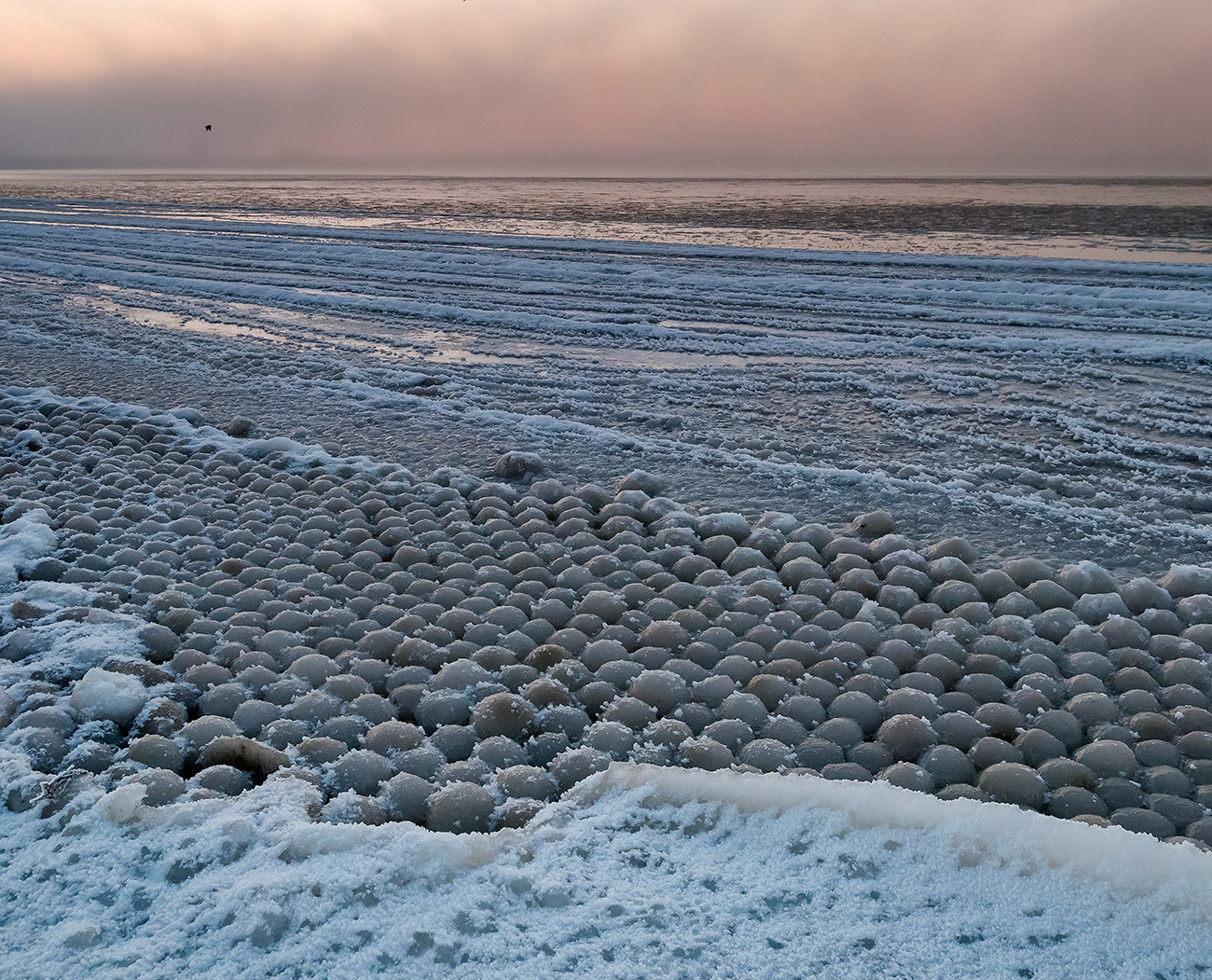 Peculiar ice shapes form not only on water, but also on land and underground, where there is moisture. This ice can be seen on trees, and it is soft to the touch and stretchy. ‘Hairy ice’ forms on rotten trees that are affected by a fungus called Exidiopsis effusa. 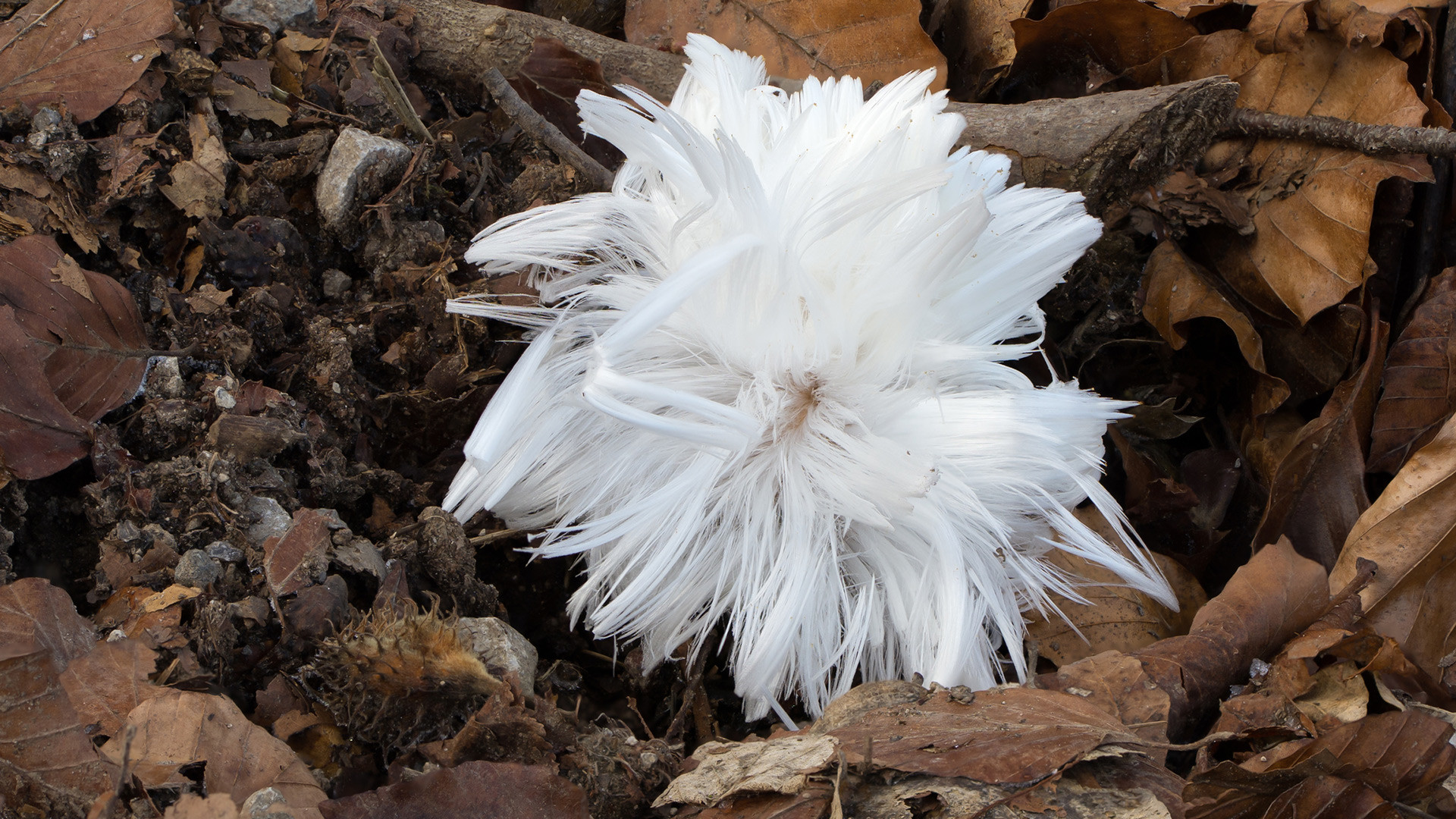 The town of Kungur in Perm Territory has an ice cave, where winter never ends. Its kilometers-long underground passages are dotted with stalactites and stalagmites, “icicles” that never melt. In the cave’s grottoes, air flows with different temperatures mix, resulting in heavy condensation. The moisture settles on the arches and freezes in a variety of forms, from needles to flowers. 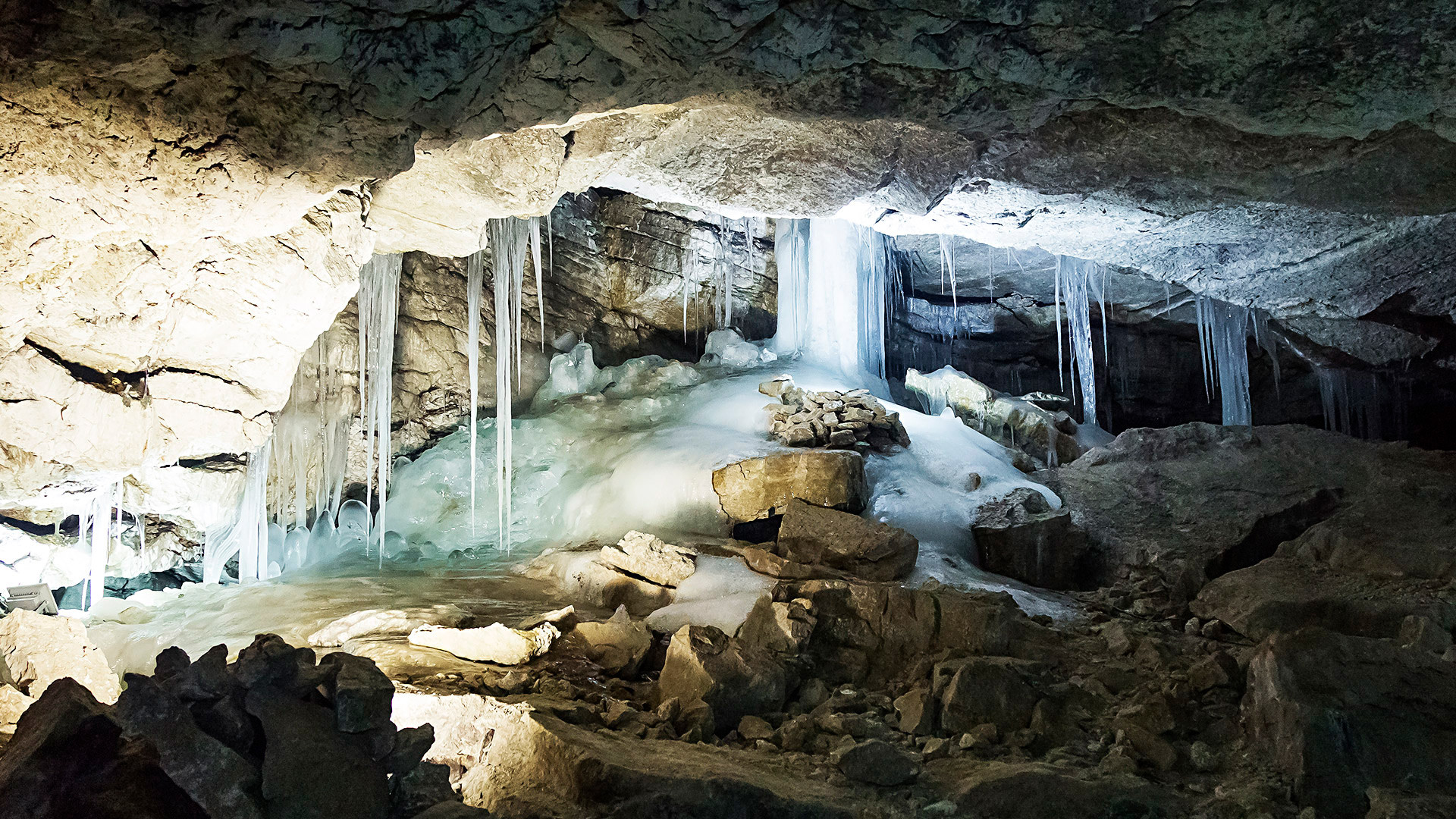 Scientists have come across some unusual forms of ice in the mountains, too. For example, so-called ‘stalk ice’. “It is called that, because it looks like a stalk of some flower. It forms in the mountains when there is a sharp change in temperature: during the day, temperature has to be above zero, while at night it needs to drop to below zero. These ice formations may grow to be up to 10-15 cm long and open at the end with flowers!” Tananaev says. Stalk ice can be found, for example, in the Caucasus. 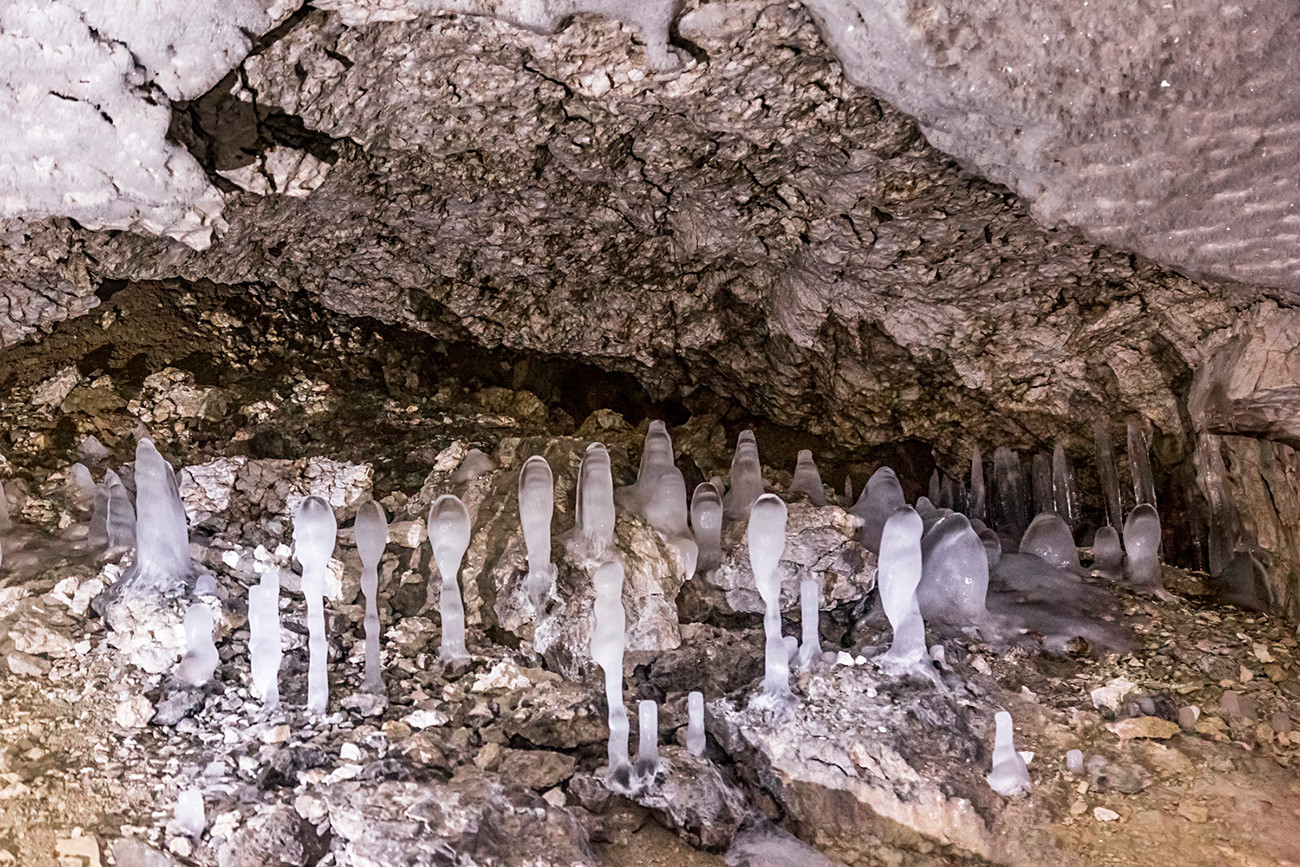 In the mountains in Yakutia, big glaciers are quite common, like the Buluus or Bolshaya Momskaya aufeis, that do not melt even in summer. “They, too, may look quite peculiar. Once, in the river valleys in the Verkhoyansk Range, I saw sky-blue ice pans. Their unusual color, of course, was due to light refraction,” says Tananaev.