Check out these ultimate Russian bloggers with samovars and folk dancing 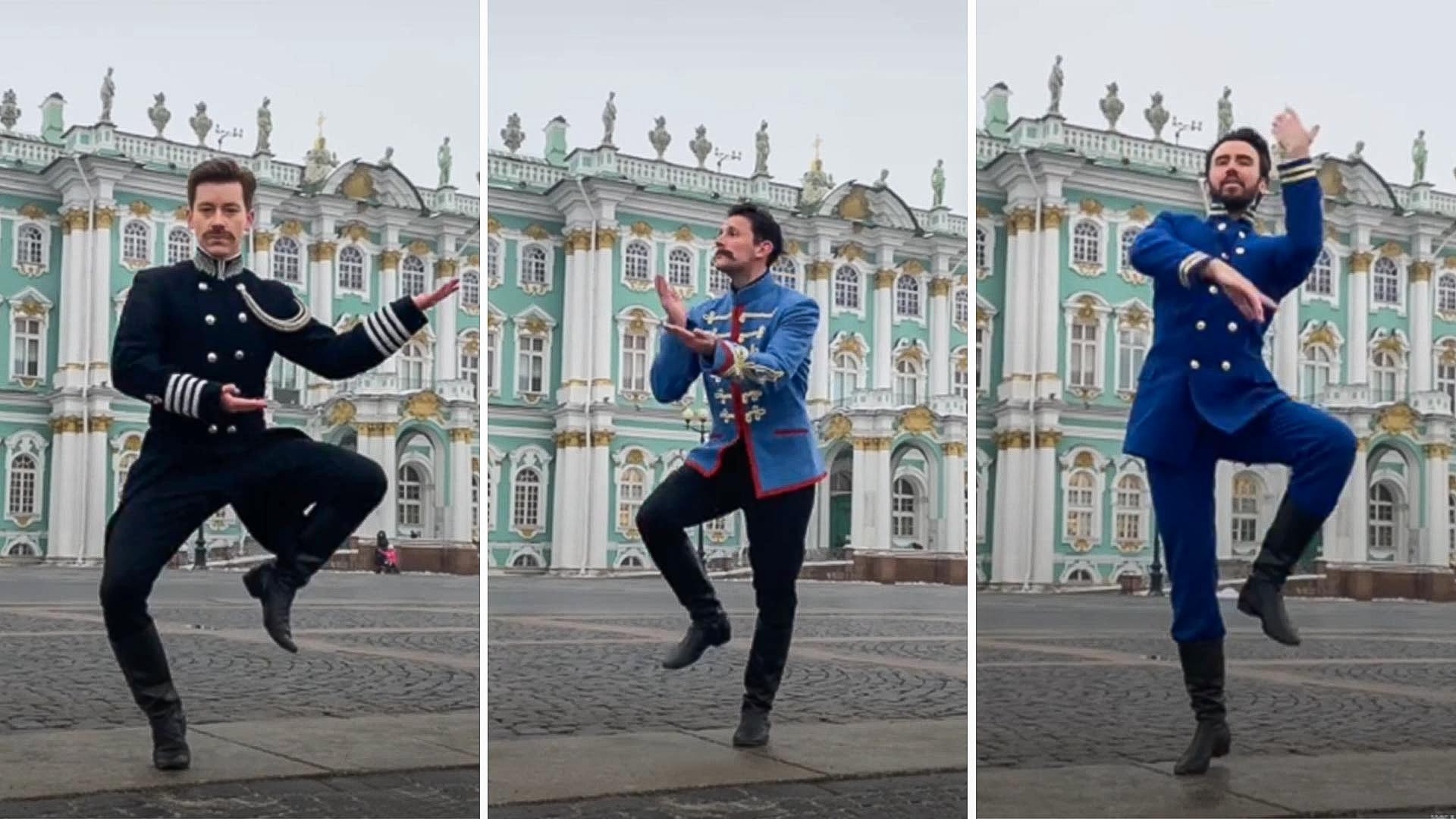 Piterville
Imagine: you’re scrolling your social media and suddenly, in the endless stream of similar content, you come across three Russian peasants or boyars, with long moustaches and in historical costumes, who are cracking jokes about serfdom, dance to Beyonce and garner millions of views in the process.

Two young men sporting long mustaches and embroidered tunics are sitting at a wooden table in a classic Russian hut. In front of them is a huge samovar with baranki (a version of Russian bagels), and the guys are holding small cups of tea with ornate patterns. They’re just drinking tea, but the comments section under the video is full of messages like: “What atmosphere!” or "What's going on here?"

This is an example of a typical live stream from Piterville, a team of bloggers from Russia, who make videos about pre-revolutionary Russia and post them on TikTok, Instagram and Twitter. Some of their TikTok videos have more than a million views and since February 2021, they have been building an international following too after one of their videos was featured on the entertainment portal, 9gag.

Furthermore, Piterville doesn’t just create entertainment content: they also try to popularize Russian history and literature even among users who have no academic interest in these topics.

Piterville consists of four people: actors from Moscow theaters - Kirill Shcherbin, Dmitry Repin and Nikolai Karpov, and their producer Anastasia Martynenko. Apart from Nastya, they all studied together at the Russian State Institute of Performing Arts in St. Petersburg. Nikolai says that as university students they "liked doing silly things".

“We graduated and all ended up in Moscow eventually. When we were already working, we were all in different theaters, and sometimes we were happy with what we had to act, with what kind of creativity filled our day, and sometimes not so happy. So we decided that we also wanted to do something for ourselves,” Nikolai Karpov explains.

It took Spotify a long time to get to Russia pic.twitter.com/A5FDFWNvqK

One of the starting points for Piterville was a birthday-wish video they made for their mutual friend, whose nickname is the Count. So, taking inspiration from the historical period conjured by that nickname, for the soundtrack to their video the actors used a rap written in the version of the Russian language that existed prior to the 1918 spelling reform. That video was shot in 2016, and before 2020 the team made several more videos in a similar style. In the fall of 2020, their mutual friend, producer Anastasia, who at that time was very taken with TikTok, invited the actors to start filming short videos for the social network on a daily basis.

In the first videos the actors made jokes about Pushkin and Gogol, and danced in Russian national costumes to the trending tracks from TikTok. The actors explain that they already had period costumes, so all that was left to do was to shoot the content.

“Mood – dancing in the fields”

“We took costumes that we liked and came up with something inspired by them. Say, we found a peasant tunic, we liked it, and we began inventing a character for it, trying to figure out in what location it would look good. You see something beautiful in the Russian style and immediately your imagination kicks in and starts generating different exciting ideas,” says Kirill Shcherbin, explaining the team's creative process.

This was at the very beginning 😅 And we still love straw-transformation 🌾 pic.twitter.com/1YslZwcalj

The actors made their first videos either at home and in studios, but soon they realized that something was missing, namely Russian landscapes and historical buildings. So Piterville began to take short trips to different parts of Russia once every three weeks.

“We choose cool district centers that are filled with a real Russian atmosphere and that do not have crowds of people in them. First, we went to Suzdal, then to Ostashkov and St. Petersburg. We get there, shoot a lot of material, then post it, and in the meantime start planning our next trips,” says Nikolai Karpov.

Most location shoots took place in late fall and winter, so in most videos the actors are wearing peasant tunics, officer's uniforms or overcoats.

“Very often the guys would be standing in the cold wearing just a shirt, while I – behind the camera – would be wearing a hat, a scarf and a warm down jacket. Freezing cold is our favorite setting,” says producer Anastasia Martynenko.

Fandom and history lessons via TikTok

The group's most popular videos tend to be of them dancing in historical costumes to modern music.

“From what I can see, the spark is struck when there is a juxtaposition of something historical and modern. Take for example, the dance to the song, Rasputin: in effect, it is a modern vintage, plus we shot it in St. Petersburg, an ideal location; so everything just came together,” Dmitry Repin describes one of the most popular Piterville videos.

Our beloved ladies and gentlemen!
Our TikTok video of dancing in the Palace Square, just like Phileas Fogg, made a world-round trip, but just for a week.
It gives us pleasure to inform you that we searched the bins and have a 1-MINUTE VERSION now.
Have a revel!❤️Ъ pic.twitter.com/Ug2DIQDGWw

Also, the group uses pre-1918 spelling in its videos and in the comments - they use the letter "ъ" at the end of words, and replace modern words with their outdated equivalents, for example instead of "to like" they say “lyubo”; instead of "I forgot", “zapamyatoval”, and so on.

In addition, Piterville made a whole series of videos based on Fyodor Dostoyevsky's novel, Crime and Punishment. According to the group’s members, after the videos the young people become more interested in the writer, if only to be able to understand the meaning of the memes about Rodion Raskolnikov, the novel's protagonist.

Raskolnikov is on the left, Sonya Marmeladova is on the right.

“For me personally, it was the best possible praise when, after we already made all those videos, one of the kids on TikTok wrote: 'Today our history teacher based a lesson around your historical TikTok videos.' I just squealed with happiness,” recalls Dmitry Repin.

Mikhail Lermontov is a famous Russian romantic writer and poet.
Sometimes called "the poet of the Caucasus".
When he was 22 years old, he was sent to the exile to Caucasus (for the Poem
“Death of the Poet”).
But In the Caucasus Lermontov found himself quite at home 🧡ъ pic.twitter.com/LahuoH3S0K

In addition to making videos, the actors also take part in live streams on social networks. Furthermore, they conduct them not only from huts or historic apartments: two of the live streams were held from the museums of Joseph Brodsky and Fyodor Dostoevsky in St. Petersburg.

This one is a hard one! Because there are 2 layers, we have to explain: Kutuzov and Jail riddles. pic.twitter.com/jy1imiXCQQ

“On several occasions we recited poetry or tried to tell fortunes on Christmas Eve with the use of a random book. Also, from time to time we recite works by our fans, and we were invited to streams from museums. In effect, we gave people from other cities the chance to visit a place they had never been before. That’s why we love live streams,” Karpov said.

You asked to translate this TikTok!
We can't speak for all Russians, but we’re 100% tea addicted 🫖ъ pic.twitter.com/w1fnFLLL4P

So far, Piterville has been operating at a loss. It only occasionally accepts donations and advertising commissions; for example, for restaurants in historical style, soap or herbal drinks. According to producer Anastasia, thanks to advertising, in February 2021 the group will finally be able to break even.

Nothing complicated, just good vibes. 🧡Ъ to everyone pic.twitter.com/8tla2TUlH6

In the meantime, Piterville fans have set up a Telegram chat where they exchange their writing and discuss Russian history, literature and music.

“You need to understand that we attract people who already have an interest in history and literature. And, indeed, we’re seeing more people trying to educate themselves. We try to convey it to them that reading is fun, that learning something new is fun, and that not knowing something is not a shame, but is absolutely normal,” summed up Nikolai Karpov.