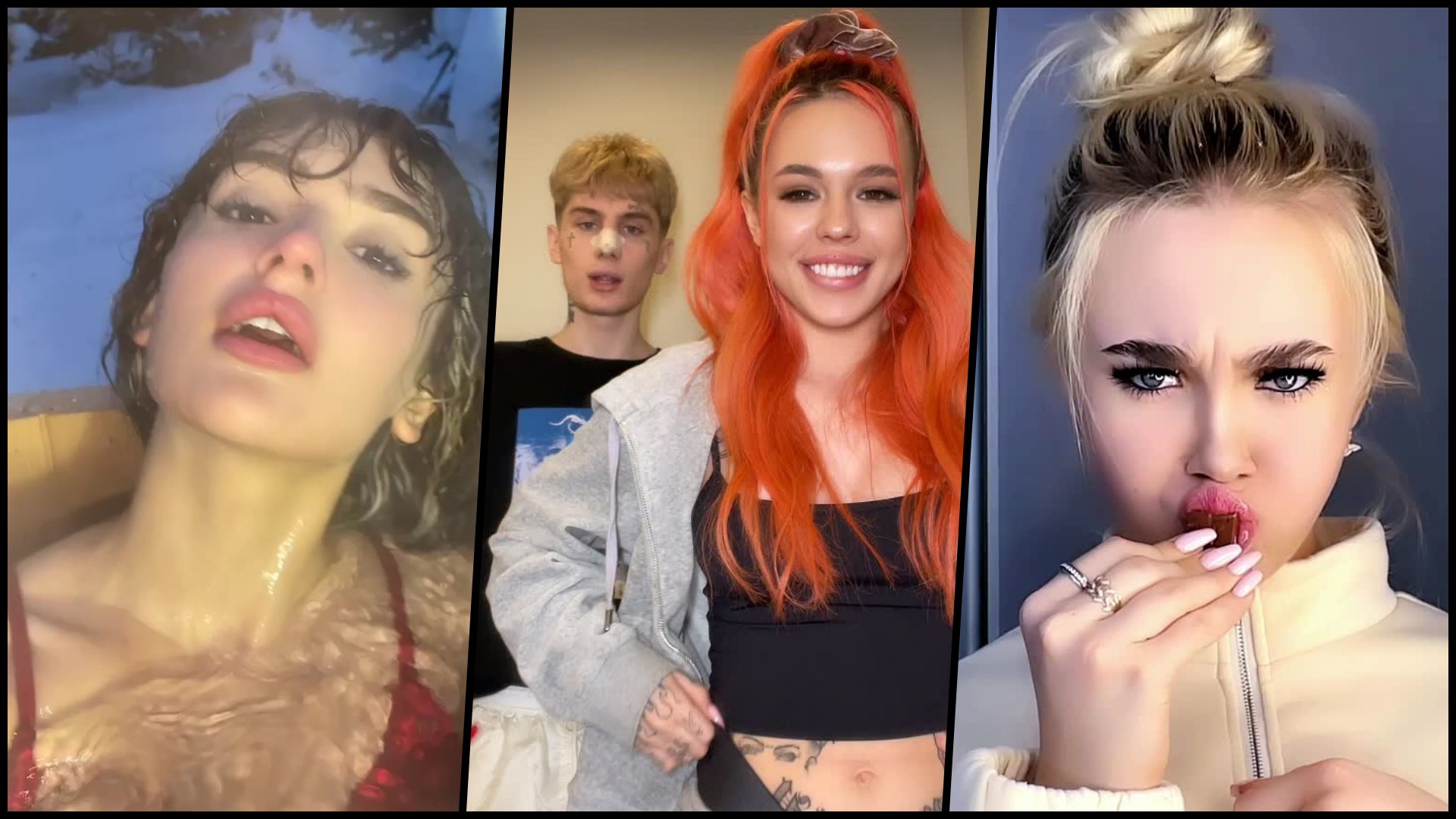 Instasamka; Kira Simurina lips baby; Dina Saeva/tiktok.com
From humorists and fitness trainers to singers, dancers and drama queens, we bring you the most popular Russian TikTokers according to the Russian firm, Brand Analytics, which specializes in social networks and mass media.

In compiling the rating the company counted the number of likes, comments and reposts for all posts by the most popular Russian TikTokers in January 2021. According to Brand Analytics, the most popular bloggers are all under 30 years old, with most views being of challenges, funny clips and duets.

Russia’s youngest and, it seems, most popular TikToker is only 13 years old. Born in Moscow into the family of producer Maria Anokhina, at the even tenderer age of 10 she modeled at Mercedes-Benz Fashion Week in Moscow, hosted a number of Russian shows, and released a video for her first song.

On TikTok, Liza posts videos wearing a short blue wig, looking like a rebellious teenager or an alien (or both). Content-wise, her videos consist mainly of dancing and applying makeup to the sound of trending songs, plus eating anything she can lay her hands on, be it a pack of cereal, Nutella or a huge bucket of ice cream.

A popular Instablogger, and now Tiktoker, from the city of Chekhov (75 km from Moscow) with pink hair and very long nails, who calls herself the queen of Russian rap. Since 2019, Daria has released five albums, the most recent of which, “Family Business”, was released on Dec. 31, 2020, and topped the Apple Music album chart.

Even before TikTok stardom, she was accused of lying to her followers about being the victim of various robberies and accidents in order to win their sympathy — and popularity — vote.

In addition, Daria's fans often spot plagiarism in her tracks, yet this does not affect her popularity in any way — she continues to shoot TikTok dance videos to her (and not only her) music, and chalk up millions of views.

The vlogger is fond of shock-jock tactics: in February 2021, she made a video insulting her own makeup artists, which provoked a backlash among subscribers.

Born in Siberia, in early childhood she moved to Moscow, and in 2014 started shooting Vine videos, dances and covers of popular songs.

Yulia describes herself as a “girlie with a very strange voice.”

The only guy in the rating, and little is known about him.

The 22-year-old Petersburger’s VKontakte page states that he works as a personal trainer for a fitness club chain.

In his videos, he loves to show off his physique and athleticism, sometimes including acrobatic and parkour stunts, plus a few (mostly staged) pranks.

This seemingly ordinary girl from Tajikistan began shooting videos in 2016-17, but first not on TikTok, rather on Instagram and YouTube. To begin with, Dina filmed dance sequences to the sound of Tajik folk songs, which quickly spread across other social networks.

In 2018, she began to do TikTok challenges with other vloggers, which quickly earned her popularity and advertising contracts with top brands like Sprite and Samsung, writes Forbes.

The Russian production center PZ, which collaborates with Dina, calls her “the face of Russian TikTok”. Meanwhile, fans wonder how she manages to sing underwater, has the courage to plunge into an ice-hole in Lake Baikal in winter, and why Bella Poarch, one of the most-liked TikTokers in the world from the Philippines, sings Dina’s only song. Dina herself ascribes it to luck.

“I just made videos I like. I guess they chime with others, too,” she said in an interview with Forbes.

Not much is known about this popular vlogger from Buryatia — she is 20 years old, was a contestant in the 2018 Miss Baikal beauty pageant, and moved to Moscow that same year, writes Baikal Daily.

She began shooting her first TikTok videos in January 2020, becoming popular six months later after she joined XHouse, one of the “houses” where TikTok stars gather.

Kira Simurina is just 16. Her VKontakte page lists her hometown as Pattaya, Thailand, but all her Instagram pictures are from Moscow and Yalta.

In 2019, the youngster began a YouTube vlog about doing makeup and caring for her hair and braces, but the videos gained no more than 25,000 views.

Her similar but shorter videos with trending sounds and strange facial expressions on TikTok, however, made Kira a star. In July 2020, she released the track "Queen of TikTok"on YouTube, the video for which is a series of clips from previous vlog posts.

Valentina was born into a poor family in a village near Rostov-on-Don; her father died of liver cancer when she was 13 years old. According to “Vali”, she entered college in Rostov-on-Don at the age of 15 and began providing for herself, at one time working as a quest animator, depicting a mentally ill patient.

At the same time, she began making her first comic videos for Musical.ly (which became TikTok), where she gained 350,000 subscribers in just the first year.

In 2020, the girl joined Hype House, another TikTok house, and moved to Moscow. Shortly afterwards, she starred in the Russian TV series, Vacation, on TNT and released her first track "Psychushka” (Insane asylum), the video for which garnered 20 million views on YouTube; TikTok users made 1.5 million videos with it.

“When a girl loves a guy, she goes mental and has no idea what’s happening to her. The guy encounters this for the first time and gets cold feet. We just translated this story into rhyme,” Valentina explains the meaning of her song. The vlogger continues to shoot dance routines to her own and others’ songs, and has plans to further develop her musical career.

Alena, from Vladivostok, made her first TikTok videos back in 2018, starting with scenes of nature and kisses with her boyfriend, but the content soon changed to humor. Today, she acts out scenes from her childhood. Donning ridiculous glasses and a child's dress, she shows what happened when guests visited her parents, how she behaved to get a guy to like her, and how she looked in physical education class without proper sports attire. And no dancing (well, almost).

When me and my bestie went to physical education class without proper sports attire:

This 21-year-old vlogger from Vloggergrad (sorry, Volgograd) hit TikTok fame as a singer, shooting her first videos back in 2016 while still a first-year student at the local institute of culture.

That was after graduating from music school, having worked as a waitress and handing out fliers in her teenage years.

Besides this, she acts out scenes and dances to popular songs on the social network.