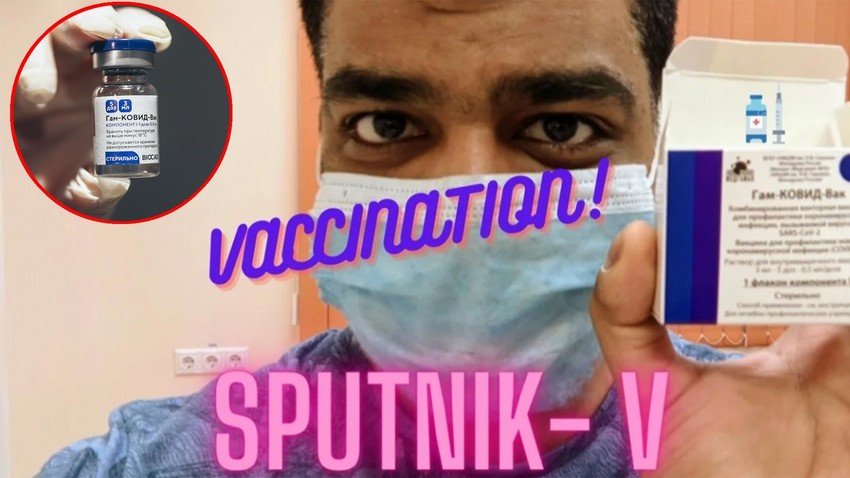 Joshua Levy; Kirill Zykov / Moskva agency
Officially, the Russian anti-Covid vaccine is not available to foreigners living in Russia. De facto, anyone can get it. We spoke to some who did.

Russia’s mass vaccination program began in January 2021. This means that everyone over the age of 18 can get vaccinated against the coronavirus, regardless of their occupation. It is expected that 60% of the country's population will receive the vaccine over the coming year.

Back then, in late January, Anna Popova, head of Rospotrebnadzor (Russia’s consumer rights watchdog), said that foreigners resident in Russia would not be eligible for the vaccine. “Today, the main goal is to reach the maximum number of Russian citizens living in the Russian Federation. <...> That is the national priority,” she stated.

However, in practice, non-Russians can get the Sputnik V vaccine — even if they don’t live in the country.

The scene is the main department store in the country — GUM on Red Square; the time is 5pm Friday. Signs about the vaccination service are placed around the shopping mall, and a voice from the loudspeakers periodically announces that people can make use of it.

In mid-January, it was widely reported that the Russian vaccine was available here — without an appointment and free of charge. Afterwards, as an extra incentive, vaccinees are treated to a free pot of GUM’s deliciously creamy trademark ice cream. 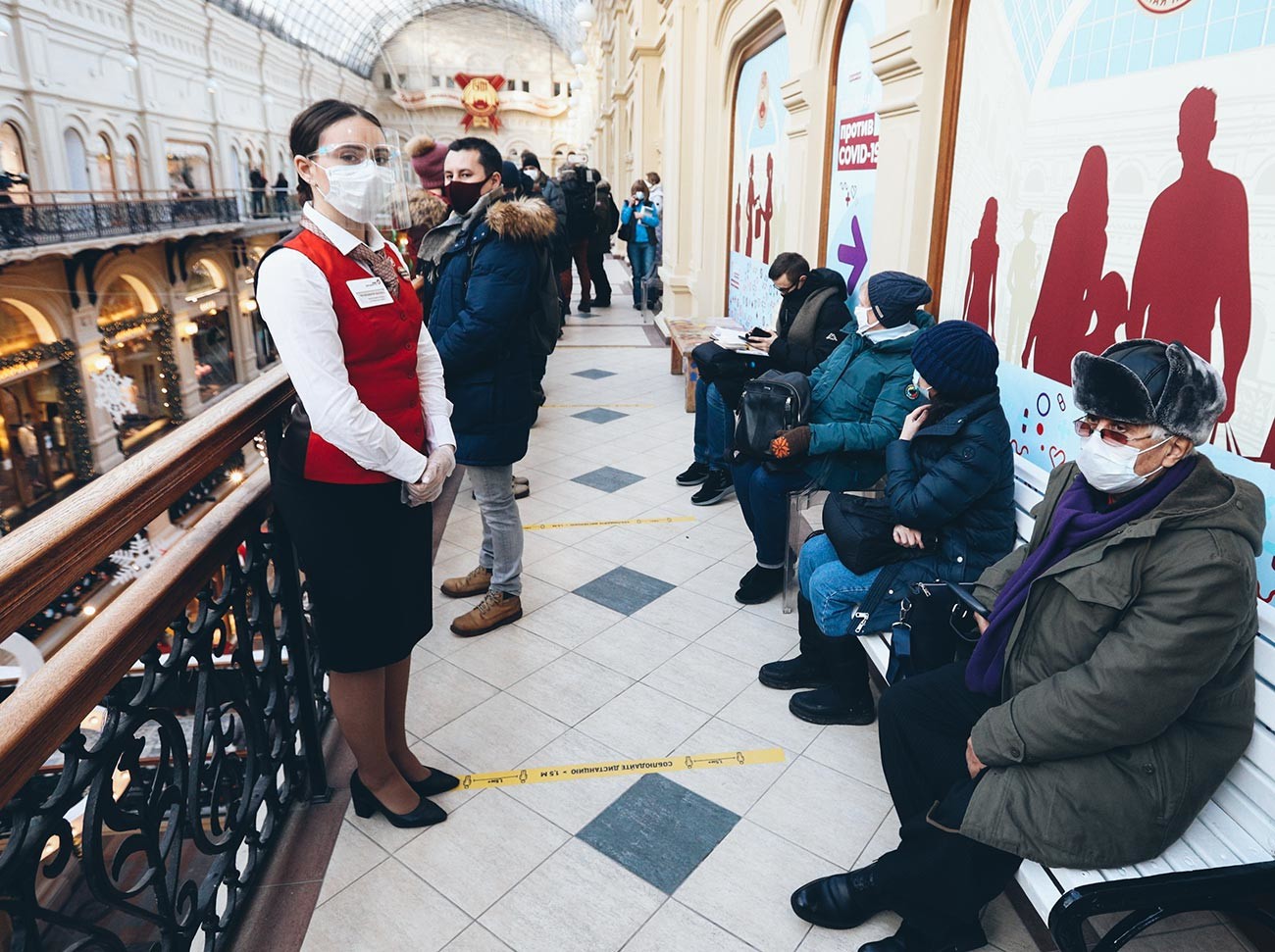 “From 10am till noon there are queues, then in the evening it’s fairly quiet,” say vaccination center staff. The vaccination station itself is located in one of the commercial premises: a small glass door, two people at the front desk, a well-lit hall, a sofa, a coat rack. The process takes just a few minutes: you fill out a form, leave your contact details, and enter the consulting room. Passport and compulsory medical insurance policy are the only documents asked for. If you don’t have the latter, then just your passport will do — no matter which country.

Nicolas Iljine, originally from France, came to GUM for the vaccine, armed only with his French passport: “There was no queue and only three people before me. I did not see any foreigners in the room.” 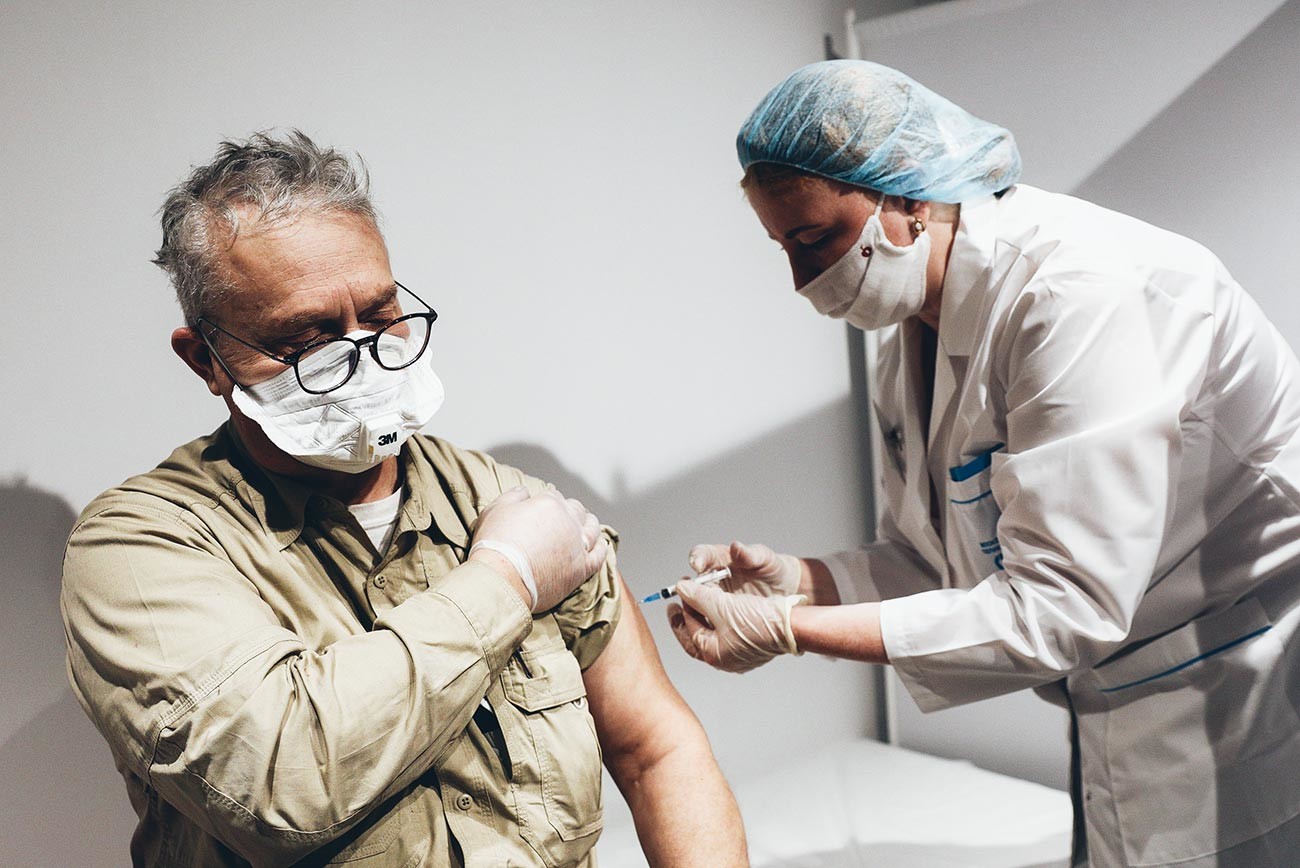 “They were not surprised that I live outside Russia and said nothing about foreigners. A doctor studied the written questionnaire which I had filled out, asked why I had a walking stick and stamped a paper. Everybody was courteous, friendly and the rooms were immaculately clean.”

“After the vaccination I got a stamped certificate and an ice cream as a present. And since I proudly posted my feat on Facebook, several friends from abroad asked me whether it was possible to get vaccinated with Sputnik V in Russia and how it functions. I told them it’s dead easy and personally I did it to avoid months of waiting until it was my turn where I live in Frankfurt am Main.”

Luigi Minari, having arrived in Moscow from Italy on a private visa on Feb. 13, also went to GUM, showed his Italian passport and, after filling out the short health status form, received the jab. “My next appointment will be on March 13. Until now my experience is very good. Although I live in Italy and have the possibility to choose another vaccine, I choose Sputnik because this vaccine was made using old research about other vaccines totally safe [sic]. So, the risk of collateral effects or future problems is not big. More, your technology (at least for me) is more safe than other vaccines, because it does not work directly in the RNA. After the first application I didn’t have collateral effects and I’m ok.”

Just one caveat: this vaccination method does not provide a QR code required for international travel.

“At night I woke up with a fever”

“If you think you can go to GUM and get a vaccine and think you will be certificated for international travel — no, that’s not possible. Because officially you don’t exist in the system, only polyclinics have access to the electronic register of the Ministry of Health,” says British citizen Joshua Levy. 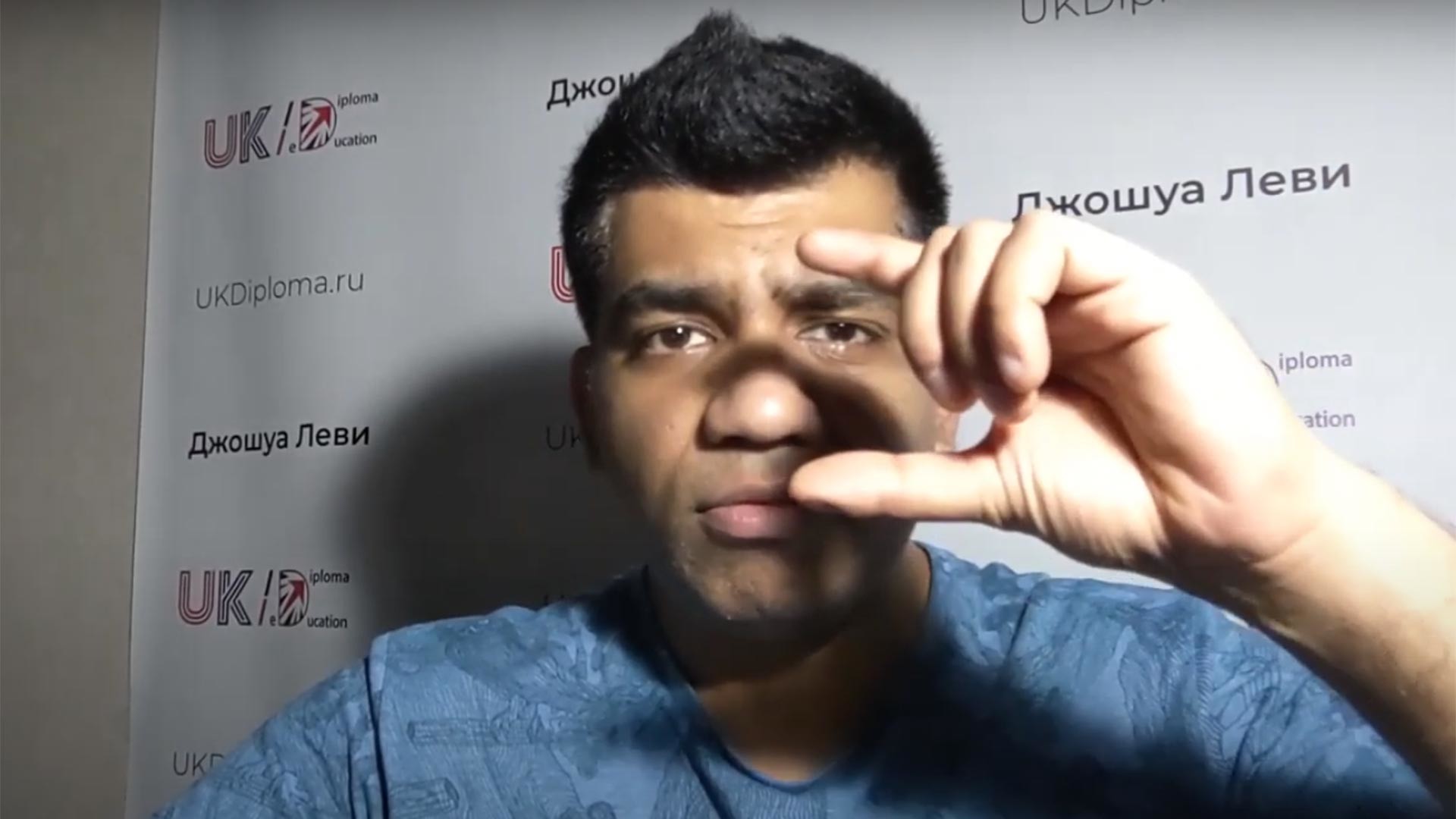 To be admitted to a Russian state polyclinic, you must have compulsory medical insurance; and to get this policy, you need to have a work or residence visa in Russia.

“Also, for international travel, you need to get a notarized English translation and an apostille from the Russian Ministry of Justice. Hardly anyone knows this,” explains Joshua, who himself went to a clinic to get the vaccine.

“I’m one of the few foreigners who got a vaccination QR code. I know it wasn’t officially announced, but this is Russia — anything is possible here. In the first week of December, I went to a regional polyclinic and asked for a vaccine, since I’m an English teacher and work with young children, so I’m automatically entitled to it. At the reception desk, I was sent to a therapist for a consultation,” he recalls.

There, he was asked about recent illnesses, respiratory problems and allergies: “I said none. When the questions were over, I was given the date of the first dose.” 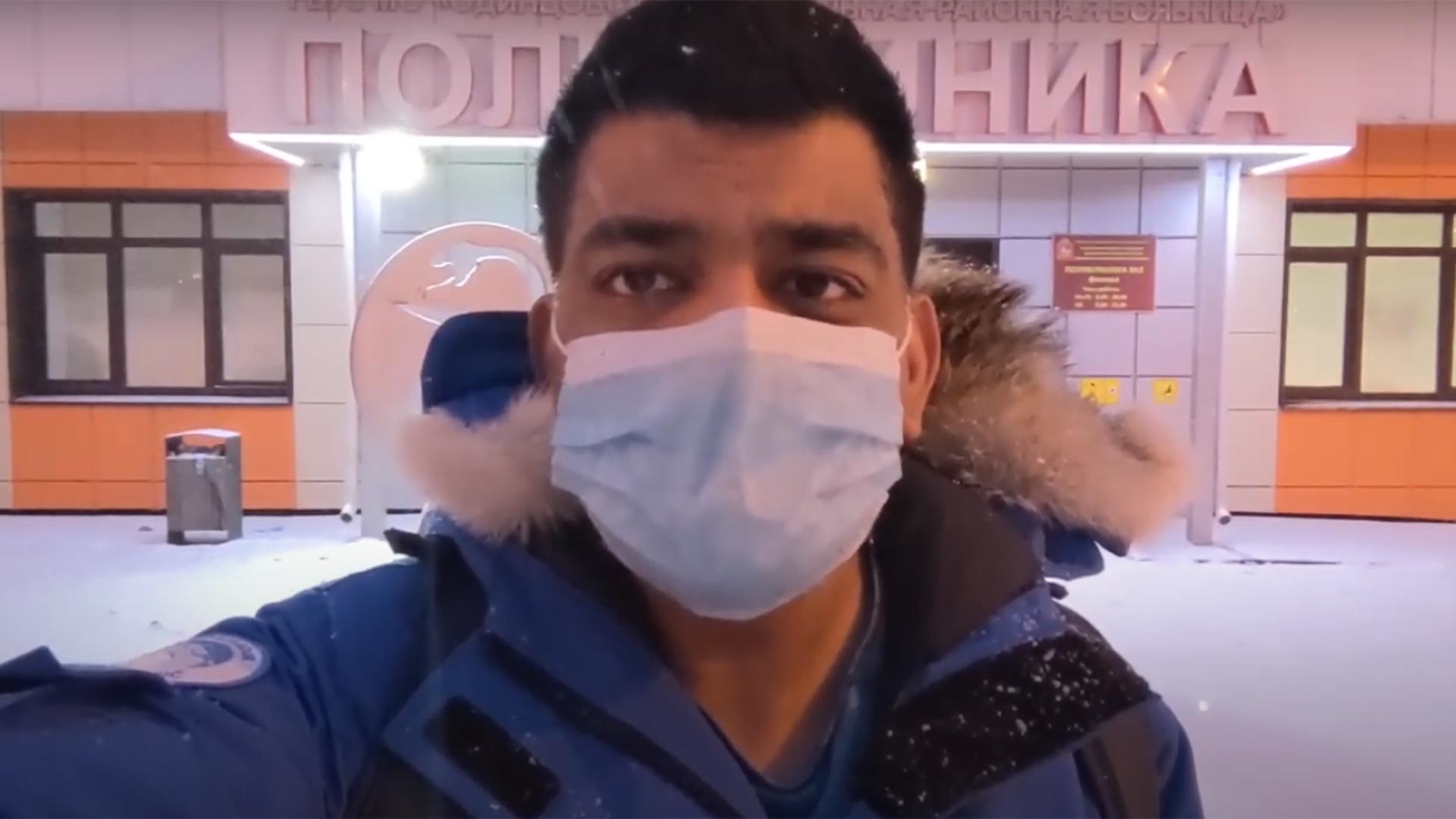 The vaccination is carried out in groups of five people at a time, since each vial contains five doses, which must be used immediately after opening. “When I arrived, there were already four people sitting there. The jab was done in the shoulder. It didn’t hurt — a couple of minutes and you’re done. By the way, I’d already had Covid.”

“The vaccine takes effect in about 12–14 hours. That night, I woke up with a fever, but that was to be expected. I immediately took a paracetamol, and my temperature dropped. During the day, I had Covid-like symptoms, mainly lethargy, severe weakness, body aches and overall lack of energy. However, the symptoms disappeared the day after, and life returned to normal.” 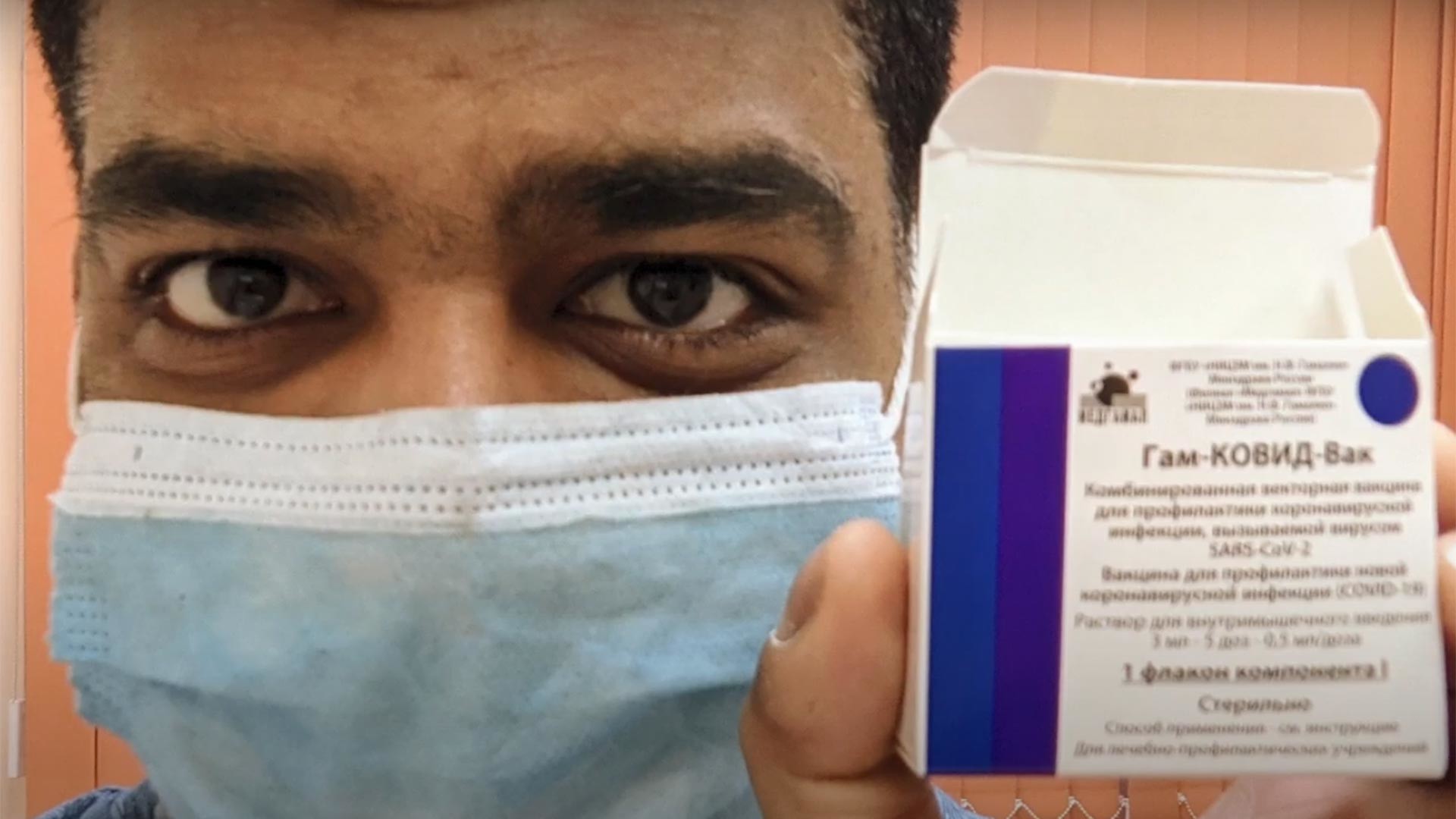 Three weeks later, Joshua received a second dose of the vaccine, when a different viral vector is injected into the body to induce an immune response: “Personally, my reaction to the second dose was stronger than the first. The symptoms were the same, but far more intense. Nevertheless, on the third day, everything calmed down and I returned to normal.”

Damien Rémy from France also received the vaccine at a state clinic. “I thought a lot about doing it, since I’m a teacher here and have an immunity problem, so I was quite concerned about being infected. I’ve been doing most of my lessons online since March 2020, but this is not convenient and not the best for my students.”

“So I asked the parents of one of my students who is a doctor. He told me to come to his clinic. I had a meeting with a virologist, who checked me, asked me to give some samples, and, when the results came back, scheduled an appointment for my vaccination. I’d tried to arrange an appointment by myself, but either it was too long of a wait, or people were asking for too much documentation that I didn’t have on me,” says Damien.

There in the clinic, it was politely explained to him in Russian what was going to happen and what forms needed to be filled out. “The waiting time was super quick, even though there were always around 5–10 people in line.” 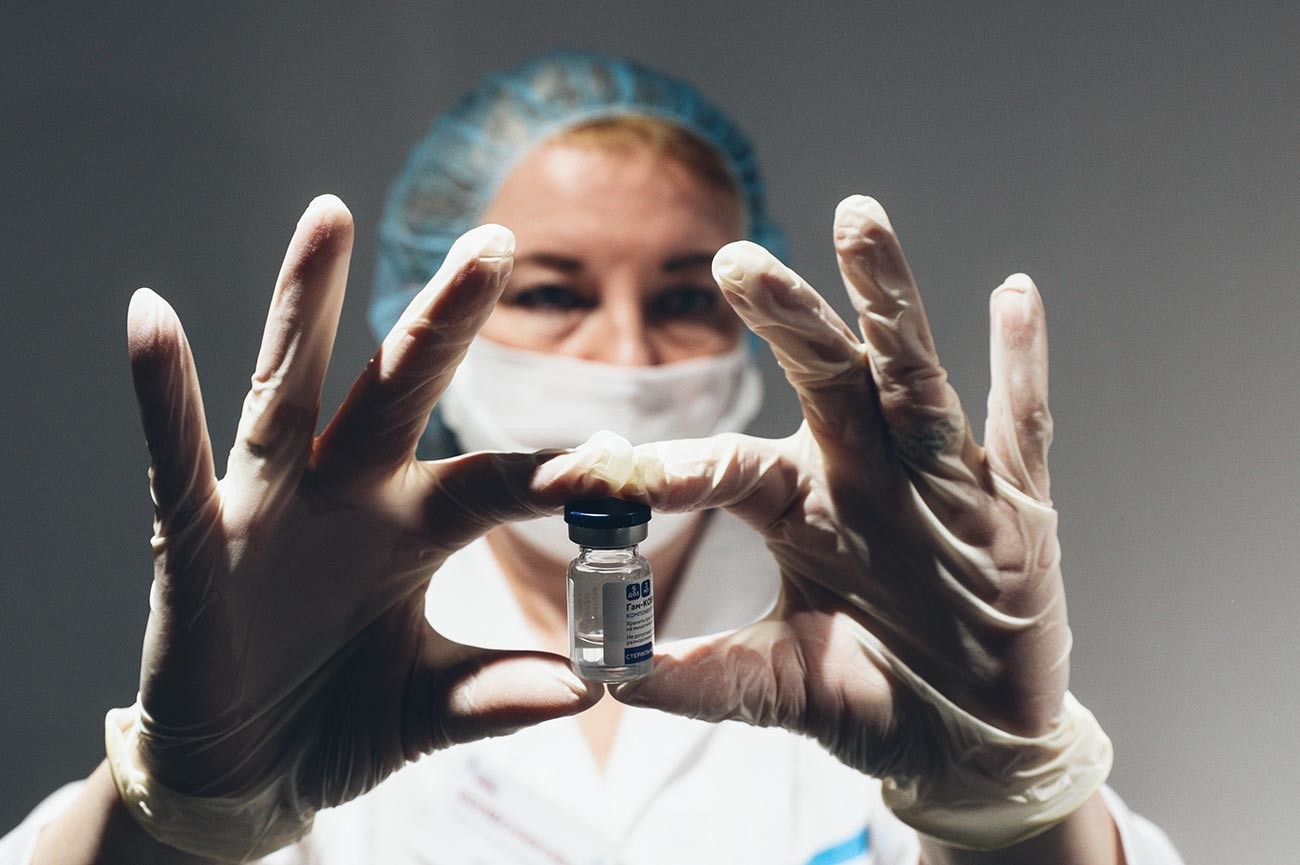 After the first injection, Damien had a high temperature and severe fatigue for 24 hours, after which he felt fine. Following the second jab, the effect was similar, only slightly weaker. In addition, he had no alcohol for six weeks. “Some people in Russia say you shouldn’t drink for two months, others say two days before, two days after. I didn’t really know when I could get vaccinated since I was calling different places for days, so I think I didn’t drink for at least six weeks.”

“Some people in France actually envy me because it takes quite a long time there, and they are still under a lot of restrictions, but also they are just scared of getting infected by the virus.”