The time the U.S. flag flew over the Kremlin 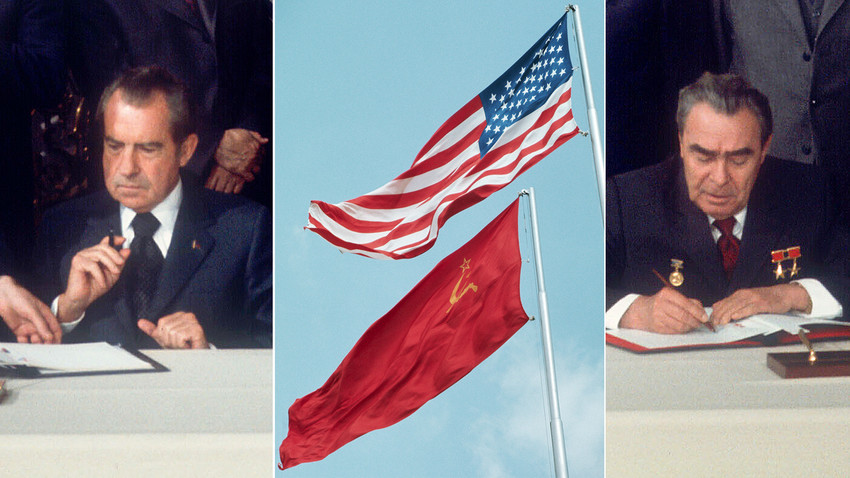 Getty Images
This incredible episode in history had no militaristic overtones, though it did take place during the Cold War. So how did it come about?

Only once in history did the U.S. flag fly over the Kremlin. It was not a scene from a movie or someone’s prank. The flag was raised by order of the Soviet secretary general and, for nine days, it waved in the wind over the bastion of Soviet power - for everyone to see.

May 1972 saw a landmark event in “detente”, a temporary, but long-awaited, decrease in confrontation between the United States and the Soviet Union. The event was the first ever official visit of the President of the United States (then Richard Nixon) on Soviet soil. 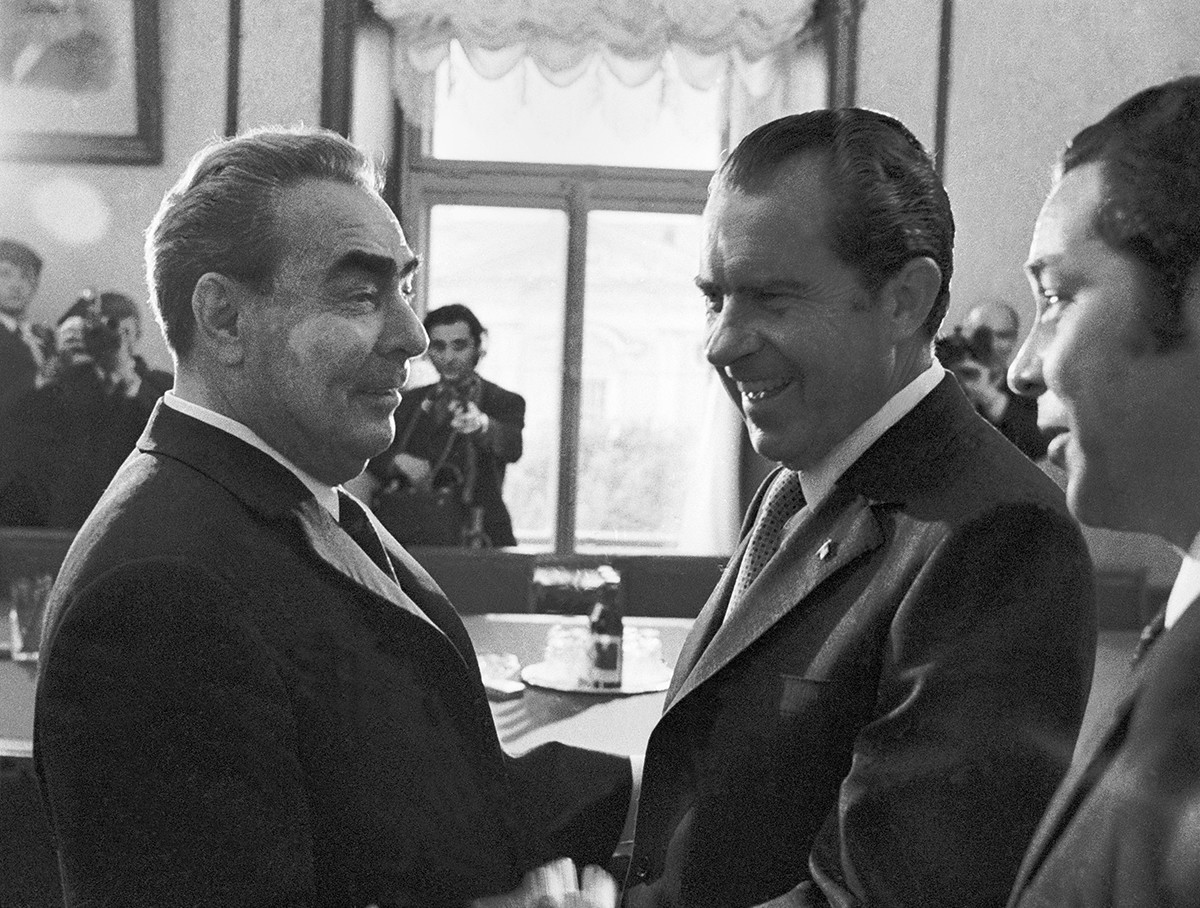 It was preceded by a chain of events lasting five years. In January 1967, the United States and the USSR agreed to work together on the Soyuz-Apollo project, a joint manned space flight, the so-called “handshake in space” between the two powers. In June of the same year, Prime Minister Alexei Kosygin visited the United States and, in December, the Soviet Academy of Sciences set up an Institute for U.S. and Canadian Studies, which later became known as a “hotbed of liberalism”. In 1969, Soviet-American negotiations on strategic arms limitation began in Helsinki and, in September 1971, a hotline was opened between the Kremlin and the White House. In short, the two superpowers were convinced that the nuclear arms race must be ended as soon as possible and began to build bridges. 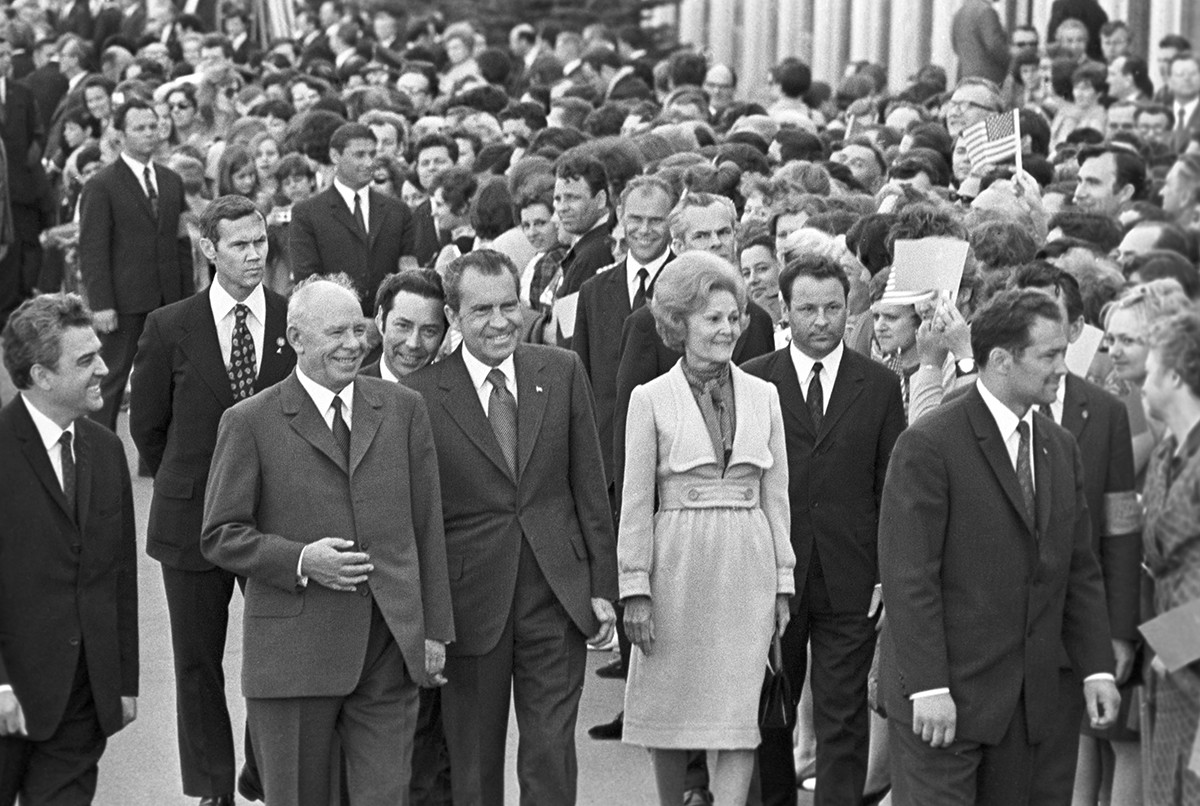 Thus, eventually it came to the first official visit of the President of the United States to the Soviet Union. The dates and the agenda of the talks were finalized. But at the very last moment, everything almost fell through: on the eve of the visit, the United States carried out massive shelling of the two largest cities in Vietnam - Hanoi and Haiphong. The reaction from the Soviets was alarming.

Anatoly Chernyaev, a high-ranking official with the international department of the Central Committee of the CPSU, later recalled that he was in Brezhnev’s office when Prime Minister Kosygin called the Soviet leader to tell him: “Look how insolent Nixon has become! Bastard! Listen, Lyonya [informal for Leonid], shall we perhaps postpone his visit? That would be a bomb!” But Brezhnev disagreed: “It would be a bomb alright, but who will it hit more?” Nixon was expected in Moscow on May 22, 1972.

The flag over the Kremlin and a room with a view

The distinguished guest was greeted at Vnukovo airport by Brezhnev’s right-hand man Nikolai Podgorny, Prime Minister Kosygin and Brezhnev himself.

The Soviet side had thought everything through to the smallest detail, even what image should greet the high-ranking guests upon their arrival. The Soviet leader did not want the airfield to be “empty”. In the end, in addition to the officials and the guard of honor consisting of representatives of the army, the air force and the navy, as prescribed by the diplomatic protocol, there was a crowd of young people gathered on the airfield. The original plan that they should be holding placards with slogans like “Friendship” and “Better to trade than to fight” was rejected, so they were just waving American and Soviet flags instead. 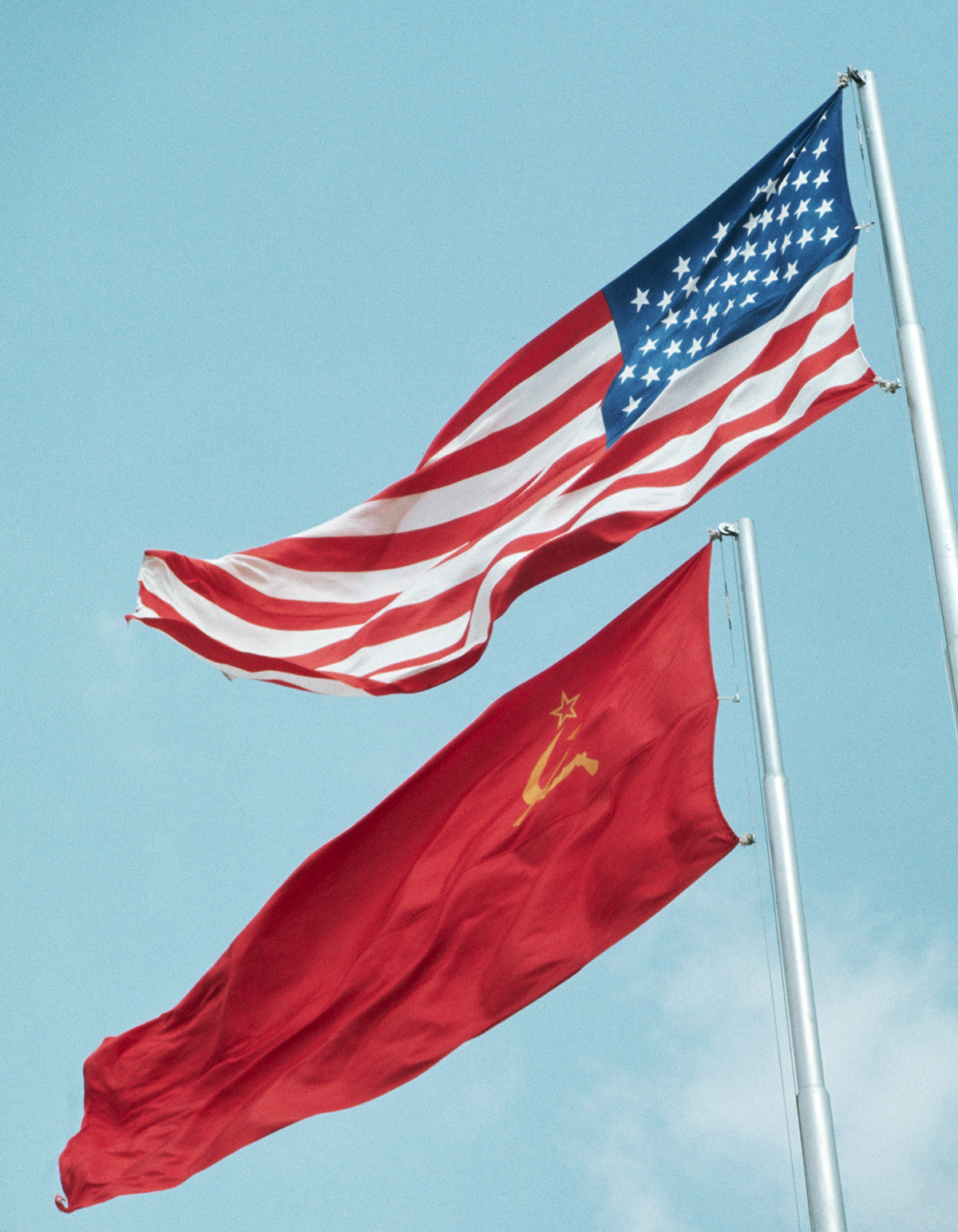 From the airport, the motorcade carrying Nixon headed for the Kremlin, along a strictly calculated route. As the famous interpreter, the voice of the USSR in official negotiations with Washington, Viktor Sukhodrev, recalled, Leninsky Prospekt and other streets leading to the Kremlin were decorated with Soviet and American flags, too.

“What was missing, however, were ‘enthusiastic’ crowds of Muscovites, who were usually assembled by a special order to greet representatives of friendly states. Furthermore, even casual passers-by were not allowed to gather on sidewalks. All this was agreed on in advance,” Sukhodrev wrote. Nixon was put up in the Kremlin, in an apartment next to the Armory, where the flag of the United States of America was raised for the first time in history. 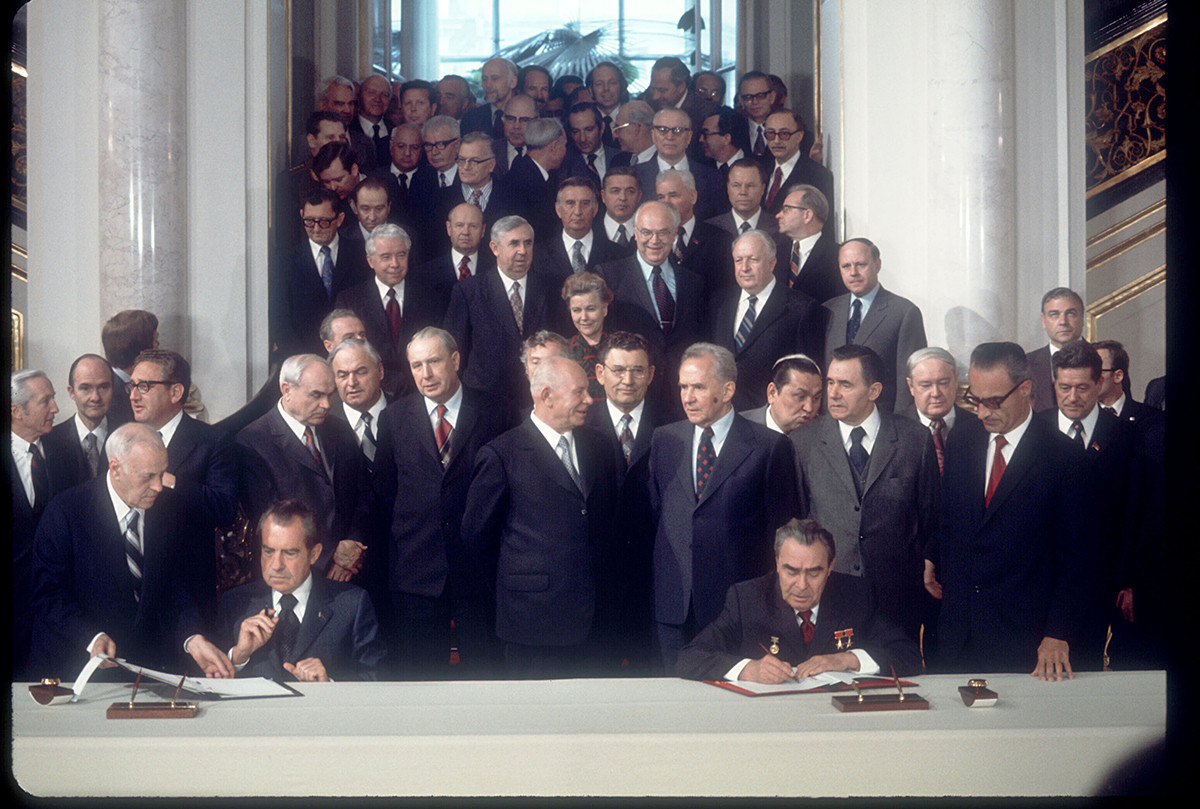 Nixon himself first noticed how deserted the streets were only during his one-day visit to Leningrad (present-day St. Petersburg): wherever his motorcade passed, he did not see a single bystander anywhere, while all the adjacent streets were blocked by trucks. And when he returned to Moscow and visited a Baptist church (which, too, had been agreed on in advance), he found that its congregation consisted only of young males. 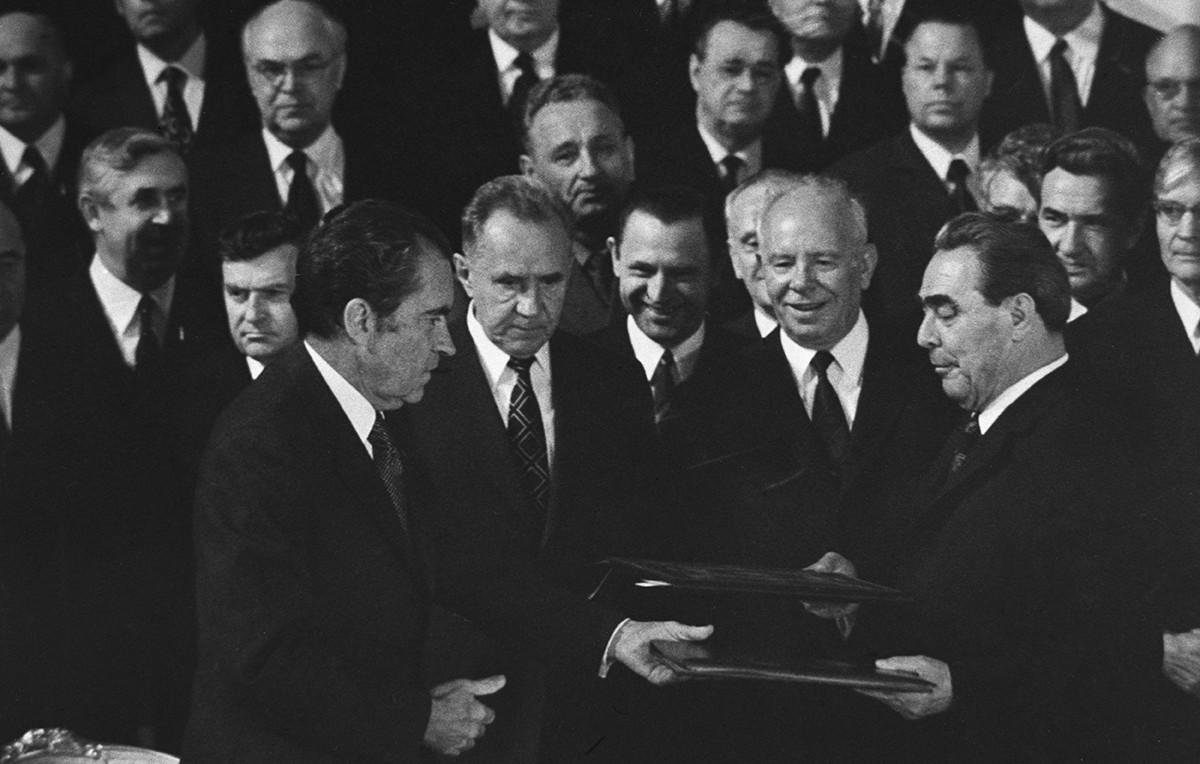 General Secretary of the CPSU Leonid Brezhnev and U.S. President Richard Nixon after signing the final document of the Soviet-American talks on the principles of relations between the USSR and the USA.

As it later turned out, ordinary parishioners were forbidden to approach the church that day and only plainclothes KGB officers were allowed in. And that was “the least” of the preparations taken ahead of the visit: for example, in order to improve the view from Nixon’s apartment in the Kremlin, an entire neighborhood in the historical center of Moscow was demolished as it blocked the panoramic view of a classical 18th century mansion.

On that visit, Richard Nixon spent a total of nine days in Russia. Life in the Kremlin had its limitations: the only place where he could talk to his aides without fear of being overheard was inside the presidential limousine brought from the States. But the visit paid off.

On May 29, the last day of the visit, Brezhnev and Nixon signed eight important documents, including the ABM Treaty and the SALT I Treaty, an agreement on non-interference in each other's internal affairs, and a bilateral agreement on cooperation in science, space, medicine and environmental protection. 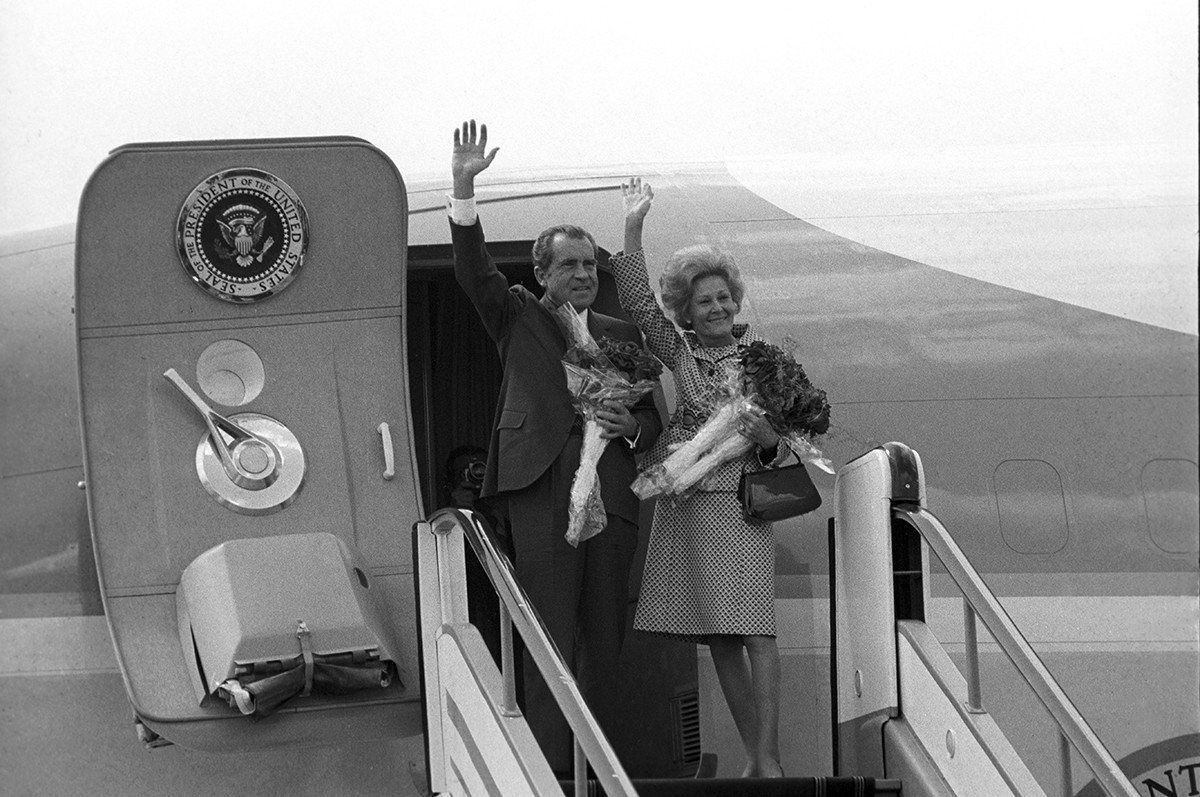 One of the results of the visit was an agreement between the Soviet government and Pepsico to build a Pepsi-Cola plant near Sochi in exchange for the exclusive right to sell Stolichnaya vodka in the United States. By the way, Coca-Cola was interested in that lucrative contract, too, but since the late 1940s, the brand had been seen in the USSR as a symbol of the “corrupt West”, whereas Pepsi back then was relatively unknown.

Soviet schoolchildren hoped that the Americans would also build a chewing gum plant, but that did not happen. The “detente” ended in 1979, with the Soviet invasion of Afghanistan.