What is a typical Russian funeral like and how much does it cost? 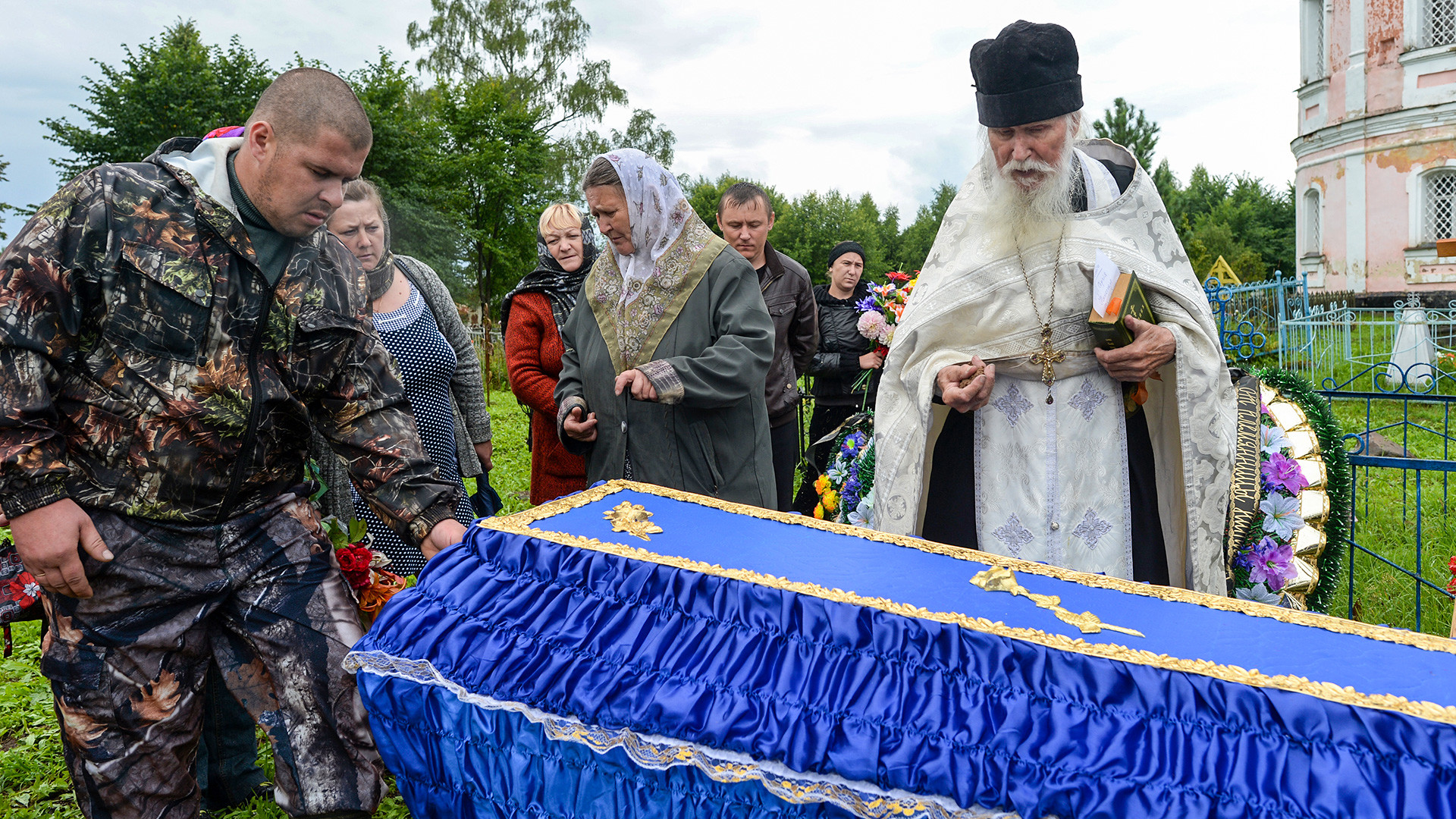 Father Sergiy, a priest and presbyter of St. Flor and St. Lavr Church in Florovskoye, Yaroslavl Region, during a funeral service at the cemetery.

Sergey Pyatakov/Sputnik
Serving pies at wakes, leaving a glass of vodka out for the deceased and trying to fend off illegal undertakers - these are just a small part of what constitutes a traditional Russian funeral these days.

An open coffin upholstered in burgundy fabric stands in the middle of a small cemetery. Inside is the body of an elderly woman. One by one, people approach the coffin with bunches of flowers, wiping away the tears that roll from their eyes and place the flowers on the dead woman.

“Today, we are burying our grandma, my mother,” says Anna Kolesnikova, a resident of Volgograd, who is filming the whole process with her camera.

“Mom, please stop filming,” her daughter pleads with her angrily, trying to take the camera away. But Anna continued to film the whole funeral and later posted the video on YouTube back in 2016. In the several years since, it has generated about 140,000 views, with none of the comments positive - viewers expressed indignation that a somewhat intimate ceremony should have been openly filmed in this way. Nevertheless, it is thanks to this video that we can see what some of the main parts of a typical Russian funeral involve. 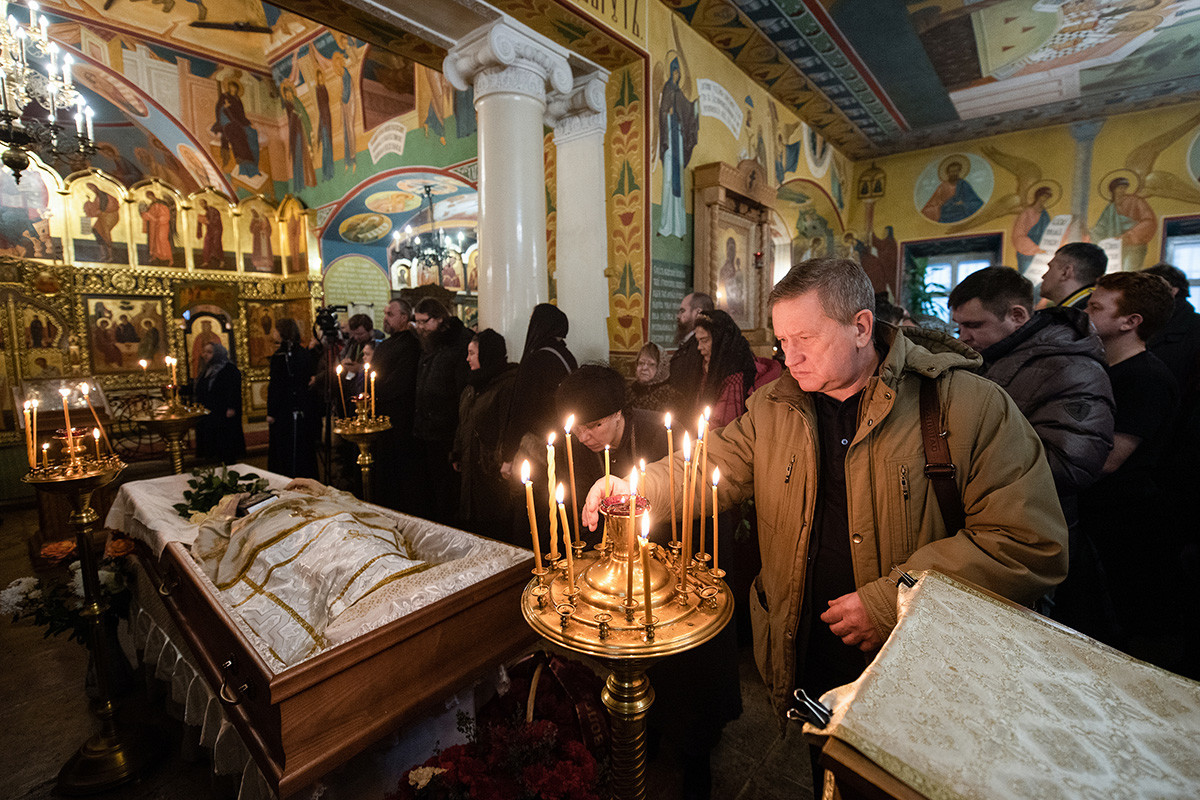 As a rule, the funeral is held on the third day after a person passes away. On the morning of the appointed day, the hearse arrives at the house of the relatives of the deceased. The relatives head to the mortuary where they collect the body and, together with the coffin, proceed to the church, usually situated next to the cemetery, for a funeral service - a special religious ceremony in an Orthodox Church. During the service, a priest recites prayers to accompany the deceased on their way to the next life. The priest asks God to forgive them all their sins and to grant them peace in the Kingdom of Heaven.

Even before Russia’s adoption of Christianity (988 AD), the services of female mourners, or literally “wailers”, as they were more commonly known, were used - women who recited and sang graveside dirges to mark the passing of a loved one. Nowadays, wailers are almost extinct, but anthropologist Svetlana Adonyeva points out that some members of folklore expeditions have recorded dirges even in the 21st century.

Then the hearse, with the coffin already closed, proceeds to the cemetery. Cemetery workers carry the coffin to the grave. The relatives walk strictly behind the coffin on the way to the graveside - according to a Russian superstition, if you walk in front of the coffin, you will condemn yourself to illness and misfortune. 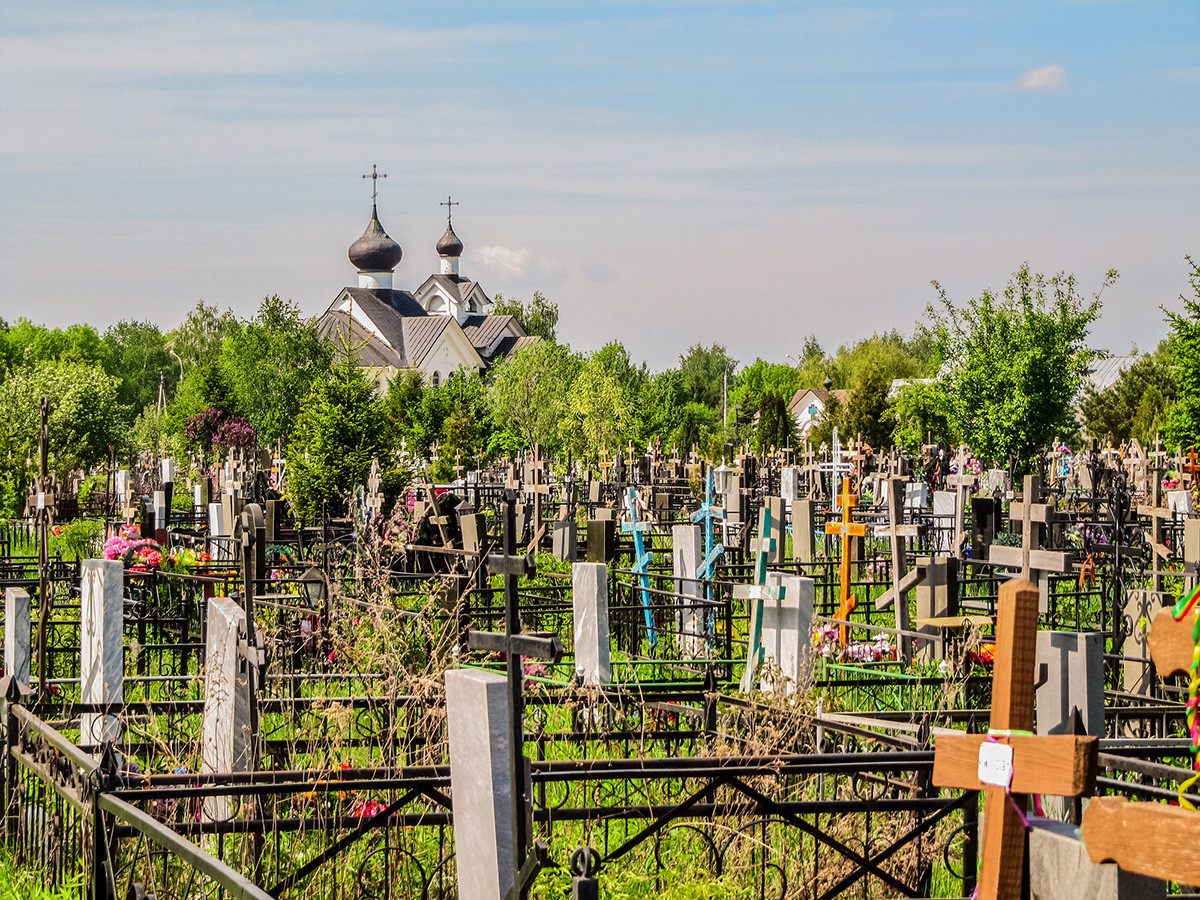 The grave diggers then lower the coffin into the dug-out grave. Relatives throw flowers and sometimes small change onto the coffin - to ensure the deceased has a good start to life in the next world.

Spruce branches can still be found scattered outside some houses in which someone has recently died and, more rarely, spruce branches are scattered along the route to the graveside. This is done in line with an old Russian custom which has different explanations. For example, in Smolensk Region, it was done “to show the deceased the way home for the next 40 days”, Svetlana Tolstaya, head of the Ethnolinguistics and Folklore Department of the Institute of Slavic Studies of the Russian Academy of Sciences, says in her book ‘The Image of the World in Text and Ritual’. 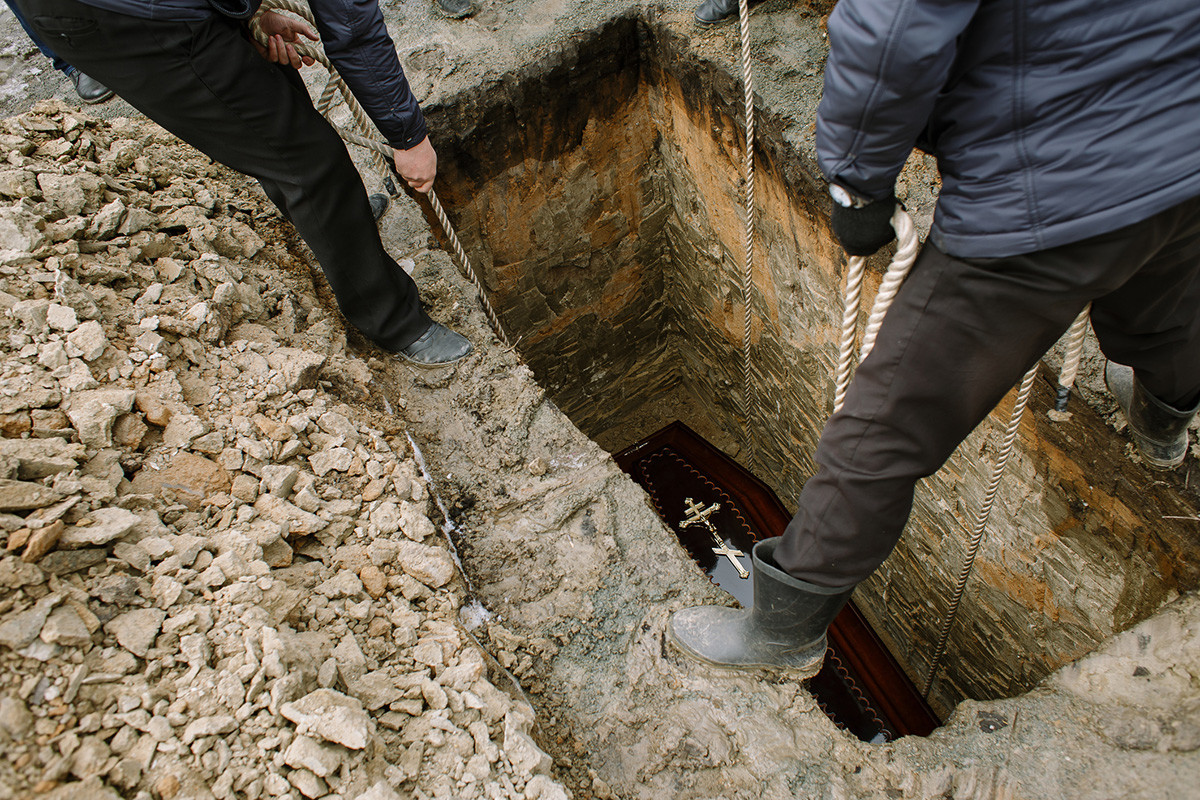 In Vladimir Region, by contrast, the branches marked the way from the house to the cemetery so that the deceased could find their way to the next world and never return to the world of the living.

The relatives visit the grave of the deceased every year, usually during the Easter holidays - by tradition, they tidy up the grave and also bring sweets, Easter eggs or a glass of vodka to the graveside for the deceased.

Funeral wake with pies and kutia

After a funeral, the friends and relatives attend the wake - a traditional Russian meal in memory of the deceased. It is usually held either in the house of the person who has died or at a cafe specializing in funeral wake functions. They can be found in almost every Russian town. 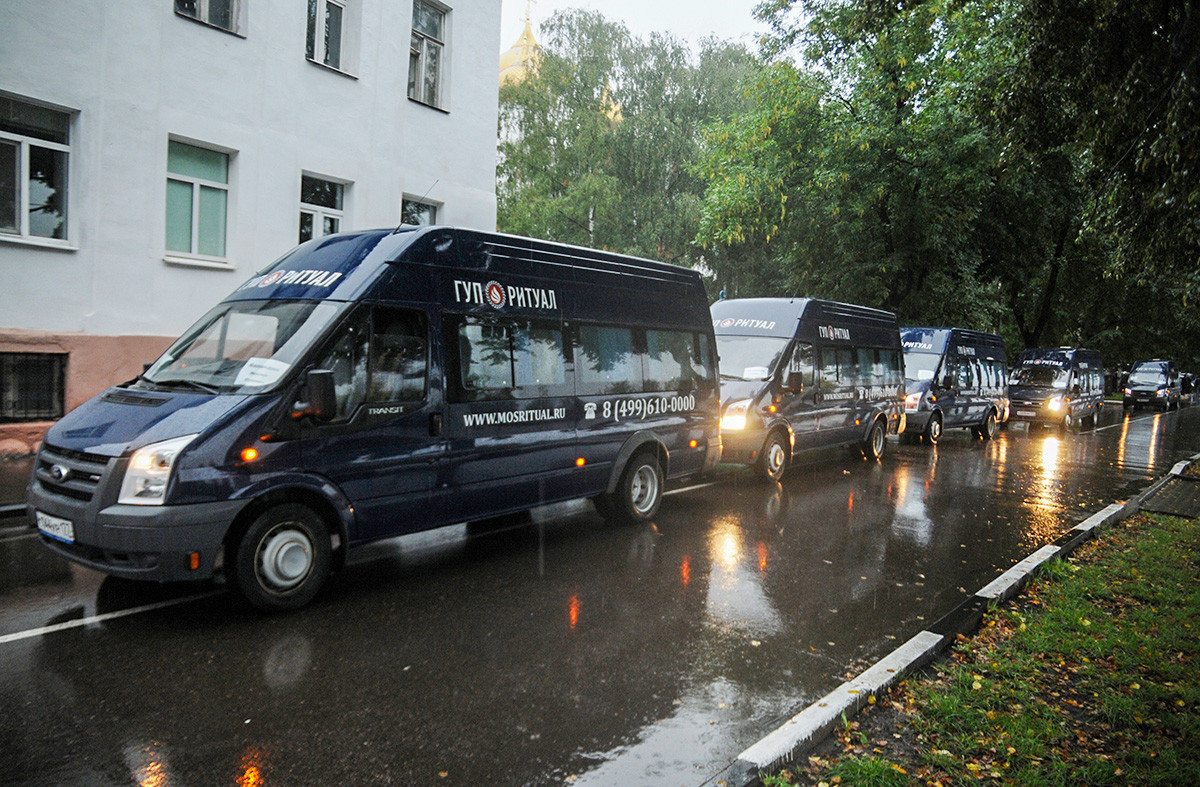 It is customary in Russia to hold a wake three times - on the day of the funeral, on the ninth and 40th day after it. It is believed that on the third day after death, the soul meets God and, for the next six days, it is taken through the abodes of heaven. On the ninth day, the soul meets God again and after that, for 31 days, it is shown hell with its suffering sinners. On the 40th day, the soul again goes up to venerate God and God sits in judgment over it, deciding where the soul is to be sent - to heaven or to hell. It is for these reasons that it is customary to pray on these days and to think of the deceased to give them support at their every meeting with God.

For the second and third wakes, which take place in a church, the relatives of the deceased order an office for the dead from a priest. At the first wake, moreover, a photograph of the deceased is placed by the table and next to it a glass of vodka and a piece of brown bread. The photograph, the bread and the glass of vodka are to remain in place until the end of the 40th day after the person's death, so that the deceased has something to sustain them before their final departure to the next world. 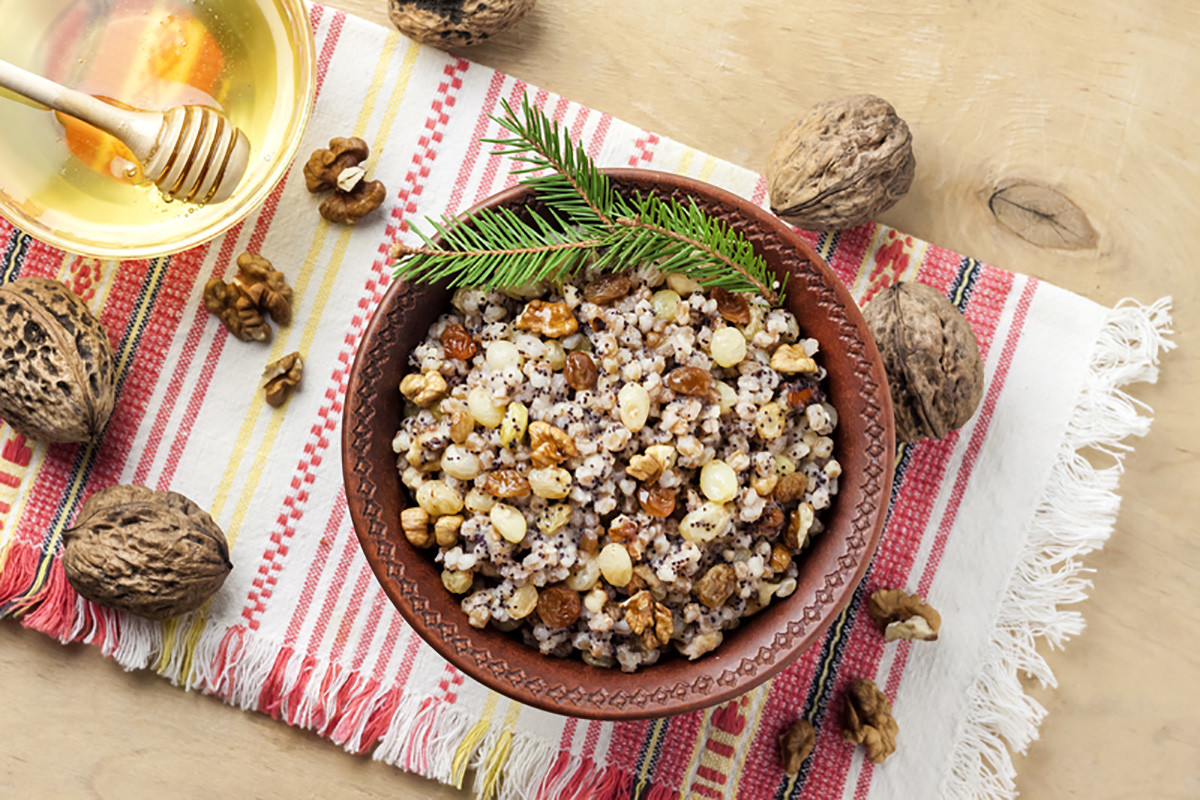 The relatives decide the menu for the wake themselves, but the traditional Russian funeral repast must include the following dishes:

As for drinks, kissel is usually served - a thick sweet drink made with berries or other fruit, to which starch is added. Russian Orthodox priests do not approve of the presence of alcohol at wakes, but the mourners do drink wine or vodka, nevertheless. Sometimes, under the influence of alcohol, some of the guests can start laughing or dancing, which is not a thing to be done at a Russian wake and precisely for this reason the amount of alcohol served is usually limited.

A cemetery plot in return for bribes and ‘grey’ realtors

“My mother had just died and I called an ambulance and just 15 minutes later some unknown men arrived and introduced themselves as representatives of a funeral services firm. They said offhandedly: ‘We’ve come for the deceased.’ I replied: ‘Are you mad or what? They haven’t sent the ambulance yet to take her to the mortuary!’ I barely managed to send them packing,” is how 59-year-old Moscow Region resident Olga Kozlova recalls the day her mother died.

Such funeral agents are called “grey” or “black” agents in Russia - they bribe ambulance workers and the police to give them the latest details of people who have died and then turn up at their relatives’ door to offer burial services at exorbitant prices. According to a Secretmag report, agents of this type make up 20 percent of the Russian funeral sector.

The Russian funeral market is valued at 64 billion rubles (approx. $864.3 million). A majority of Russians (79 percent) spend between 20,000 and 100,000 rubles (approx. $270-$1,300) on a funeral, depending on their budget, while eight percent of the population can afford a funeral costing more than this amount, according to a 2019 Anketolog Institute of Public Opinion poll. 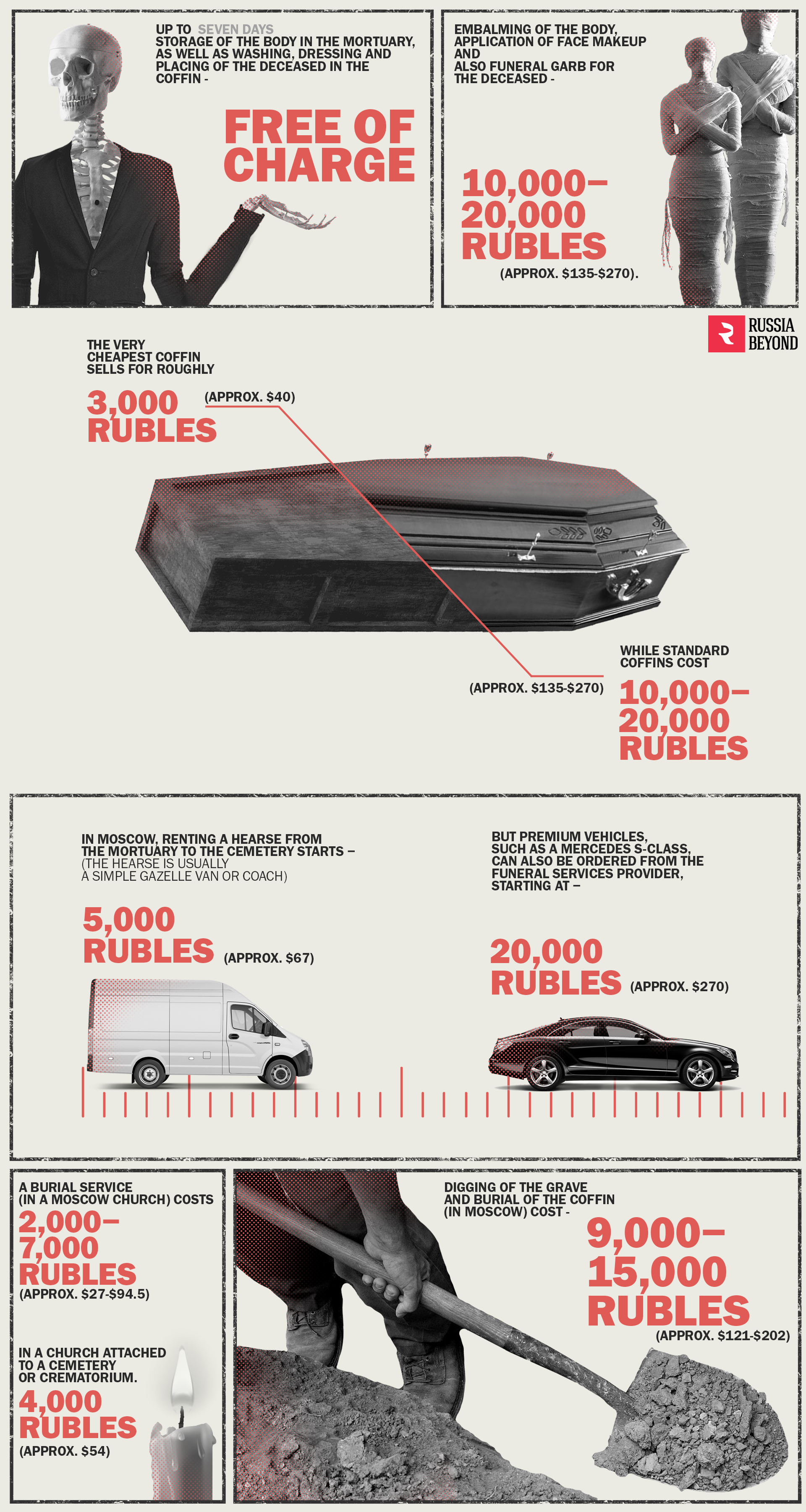 The greatest burial expense is perhaps the cemetery plot. Russians frequently purchase cemetery plots in advance, or bury the deceased in a plot with relatives. If a deceased relative has no-one to be buried with, the managements of open cemeteries are obliged to allocate free burial plots, but cemetery officials frequently apply blackmail - in Nizhny Novgorod, for instance, relatives of the deceased were offered the choice of a more suitable plot for between 20,000 and 100,000 rubles (approx. $270 to $1,300). As a rule, they are located not far from the cemetery entrance, next to graves of family members or on a dry site where ground waters won’t waterlog the grave.

In Moscow, you can bid for a plot at auction, but, again, they don’t come cheap - they start at 200,000 rubles (approx. $2,700). Unidentified individuals also sell plots directly on ad sites, with the price ranging from several tens of thousands of rubles to several million. 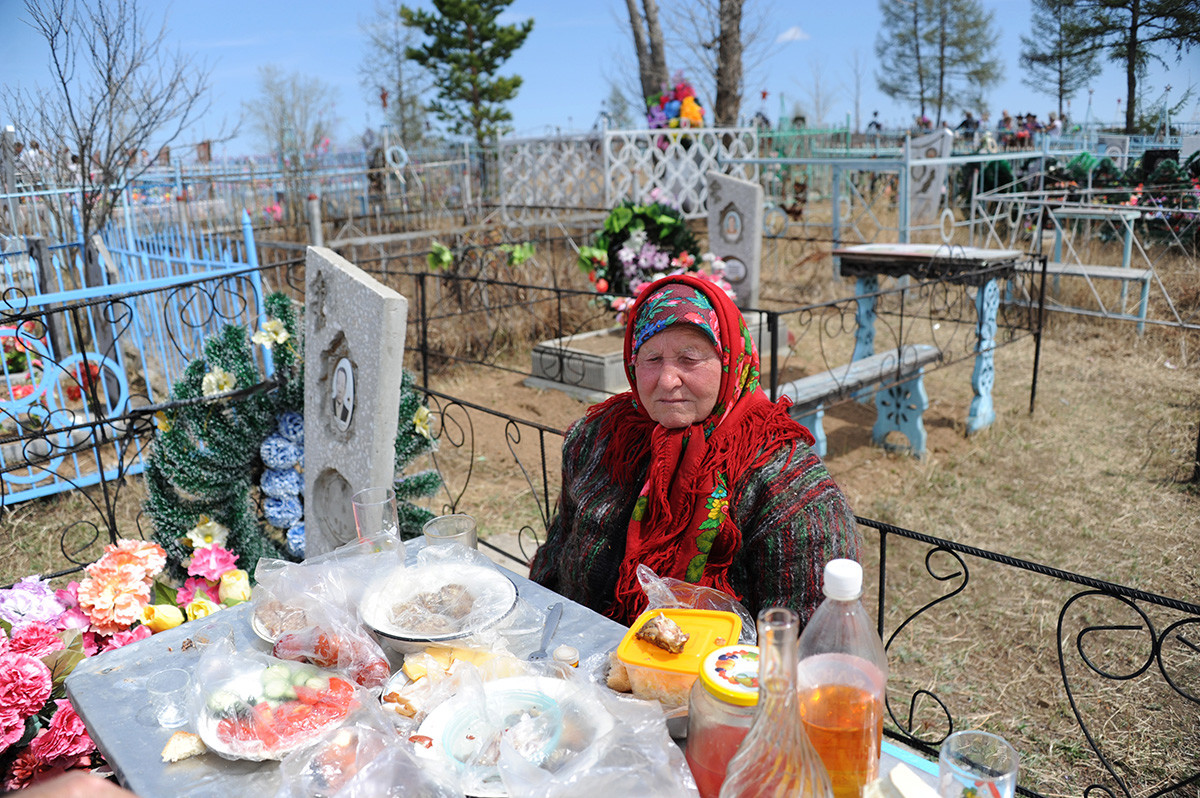 Cremation and subsequent burial are much cheaper - from 15,000 to 20,000 rubles (approx. $202-$270), including burial of the urn containing the deceased’s ashes in the grave plot, but in 89 percent of cases, Russians choose interment in a grave, this being the most long-standing tradition.

Following the death of an unemployed person, a non-working pensioner or a still-born child, the state pays part of the funeral expenses - in Moscow, this allowance is worth up to 18,400 rubles (approx. $248).