Anti-abortion propaganda is rife in Russia. How effective is it? 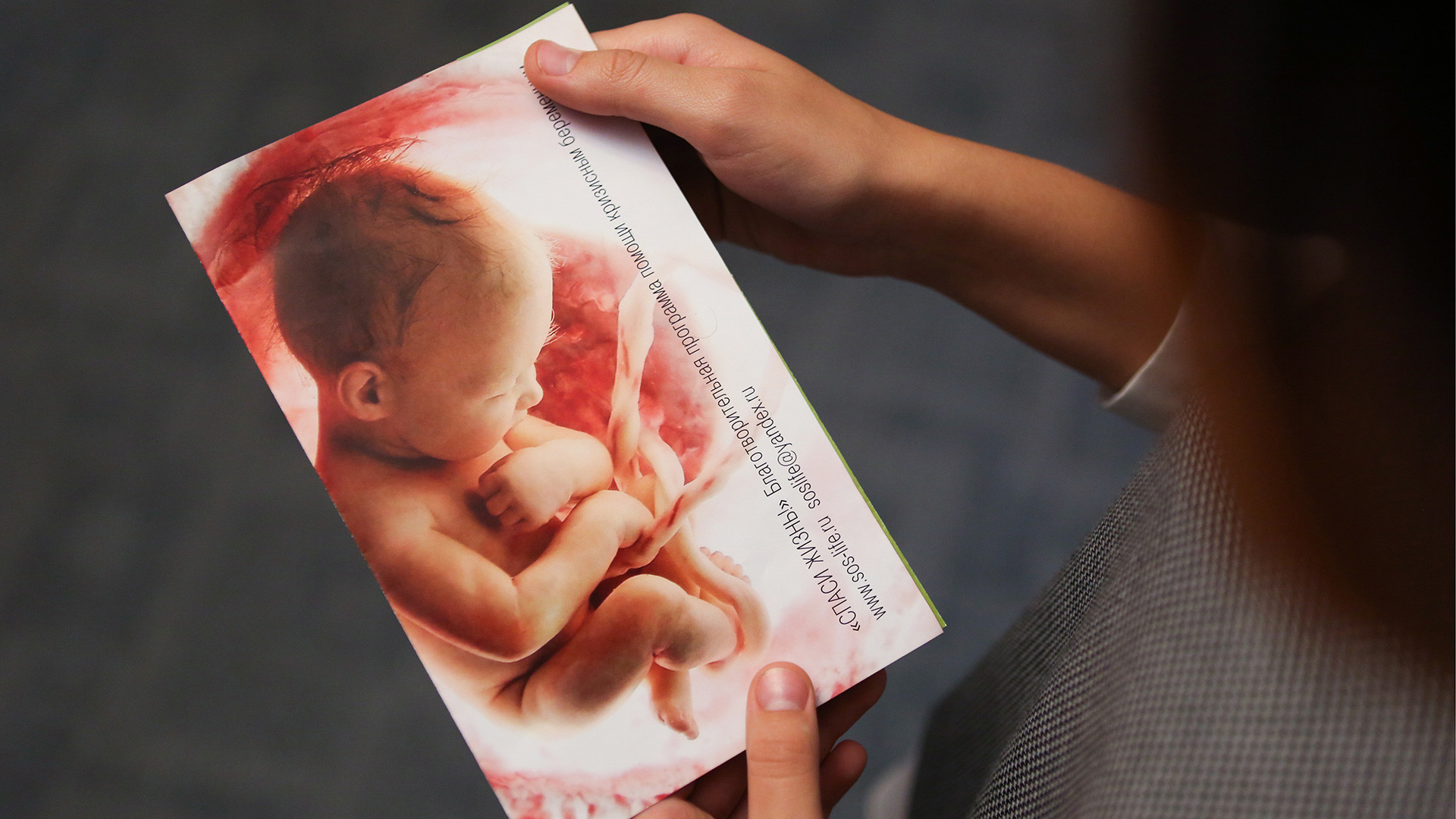 A leaflet of 'Save the Life' charity foundation

Anton Vergun/TASS
Russian doctors get a bonus for persuading women not to have an abortion, while anti-abortion activists advocate childbirth no matter what the circumstances or age, including minors. Some women planning an abortion are even forced to consult a priest.

Moscow housewife Vera, five weeks pregnant, learned that her husband, a removal man, had been laid off back in March 2020 at the start of the lockdown. Together, they tried to find another job, but employers were offering interviews only after quarantine. Realizing that there was barely enough money to feed themselves, never mind a third mouth, Vera and her husband took the painful decision to have an abortion. However, her request was turned down.

“The doctor told me my compulsory medical insurance [free for all Russians] might not cover abortion, and in any case all non-emergency surgery was postponed. He said I could try to argue my case, but by then it would be too late. Judging by the tone of voice, I realized I wasn’t the only one in that position,” Vera said in an interview with Coda. 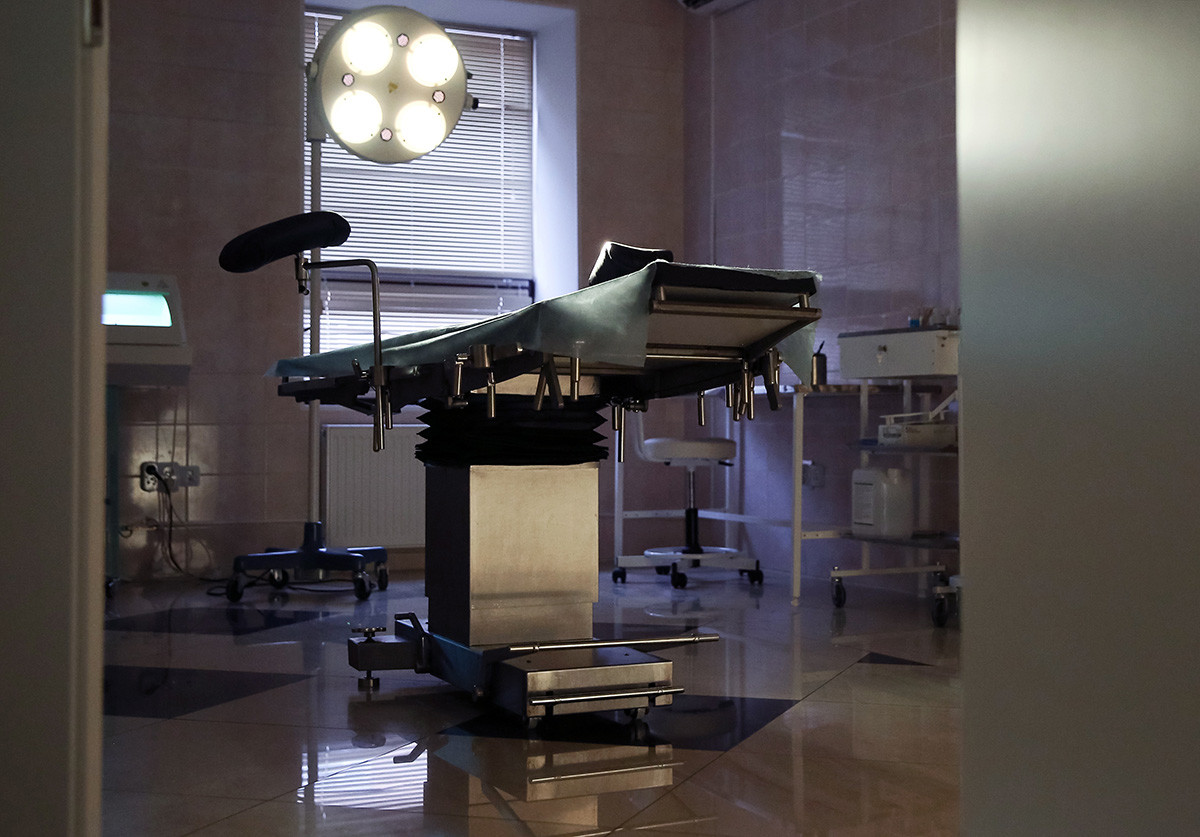 An operating room of a hospital’s department of gynecology

In the end, Vera opted to pay for an abortion at a private clinic. That meant racking up credit card debt.

Vera is indeed not the only woman to be denied an abortion during the pandemic. Some hospitals started refusing free abortions in Moscow and other Russian regions to free up space for coronavirus patients.

That said, even in normal times she might have been refused. Russia’s collapsing birth rate since 1990 means that gynecologists often dissuade patients from having an abortion; sometimes women are even required to receive a priest’s blessing.

According to the most recent official statistics, in 2018 there were 661,000 abortions in Russia against 1.6 million births. Rosstat, the federal statistics service, cite the main reasons for abortion as lack of confidence in one’s partner, housing difficulties, low income, and lack of sex education among young people. According to the medical portal NeBoleem, 40 percent of abortions are done at the woman’s request, 25 percent due to risks to the mother’s health, 23 percent because of social problems, and the remaining 12 percent because of fetal anomalies. At the same time, the number of abortions in Russia is decreasing year on year: from 1993 to 2018 there was an eightfold drop — Vladimir Serov, president of the Russian Society of Obstetricians and Gynecologists, told Izvestia newspaper in January 2018. 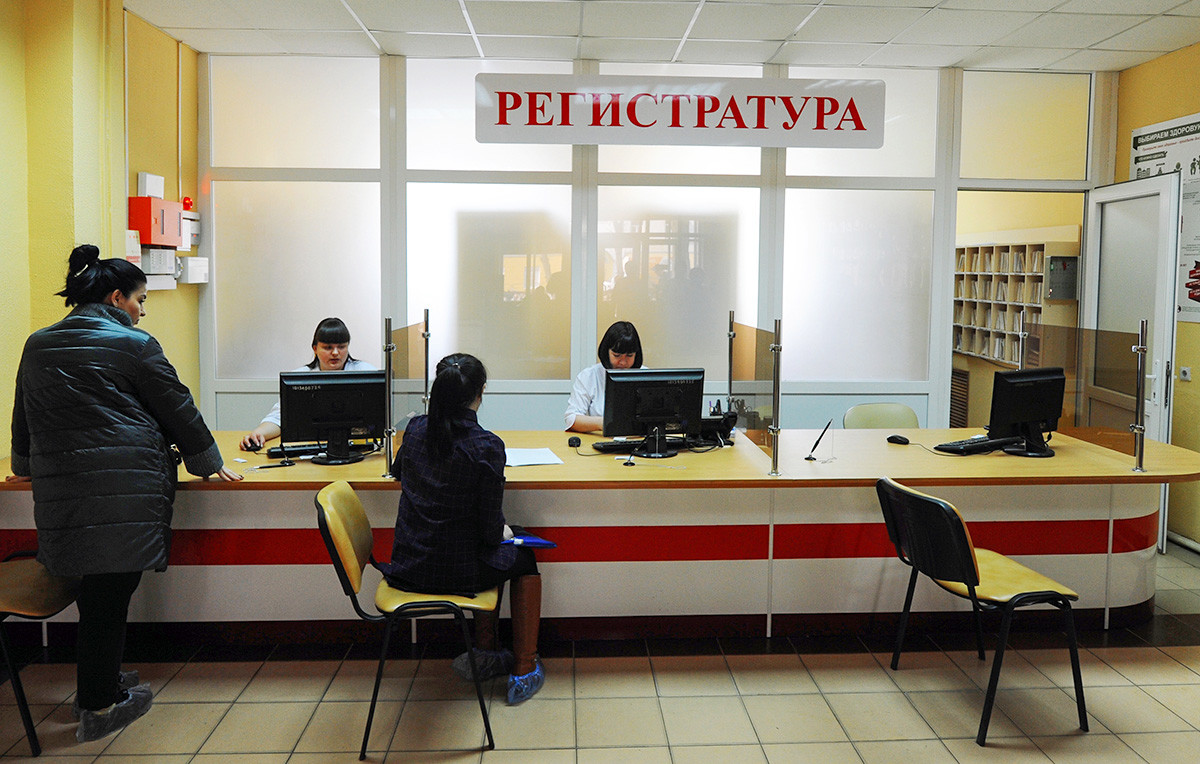 Registration desk at a prenatal clinic in the city of Tambov

Every Russian woman has the right to terminate a pregnancy free of charge before 12 weeks (22 in the case of rape), and at any time if there is a pressing medical reason. One caveat is that women cannot have an abortion on the same day as their consultation — under the law, the doctor must give the woman time to consider her decision. This “period of reflection” is 2–7 days.

Postponing operations is not the only measure that doctors take to prevent abortions. In addition, they are required to show the woman an ultrasound scan of the embryo, including its heartbeat. As an incentive, doctors who dissuade a woman from having an abortion can take part in the “Sanctity of Motherhood” competition with the chance to receive a cash payout of 60–100,000 rubles ($810–1,300). 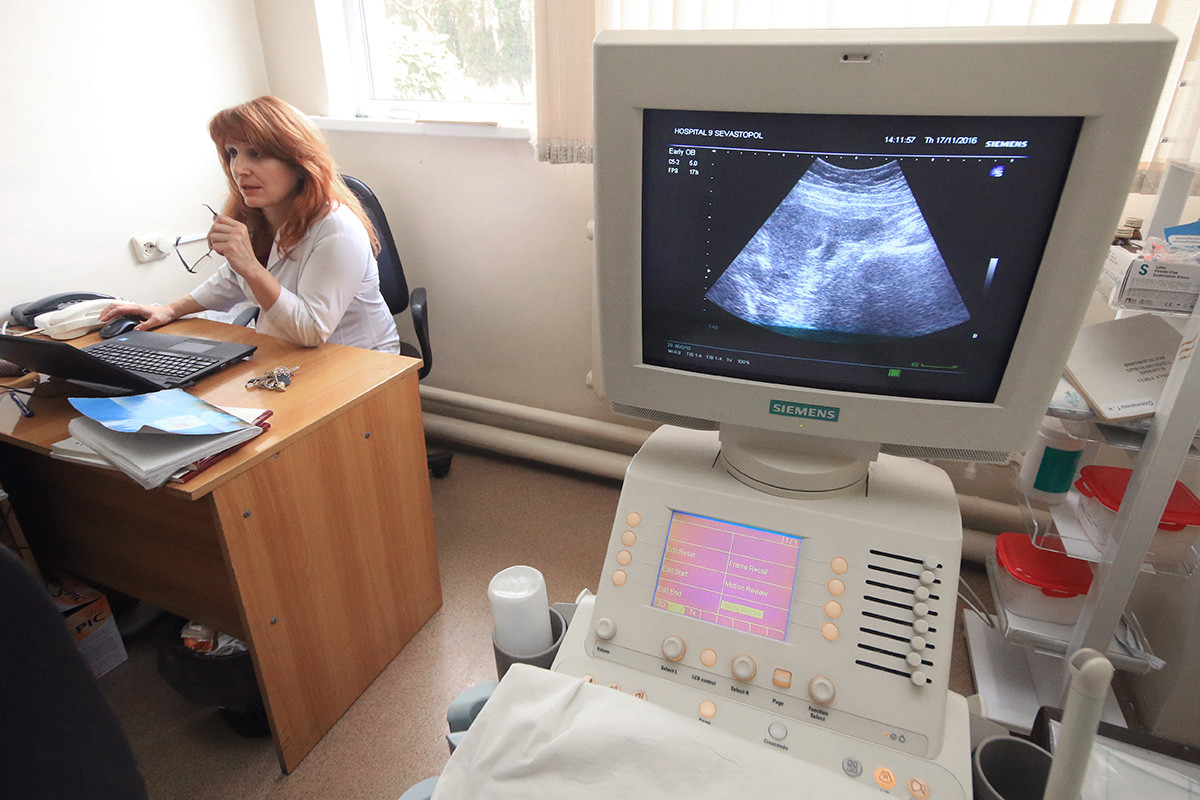 An ultrasound machine at a Crimean hospital

“I’m a fanatical believer in childbirth. Women were created to give birth. It’s our job to talk them out of abortion. I myself have worked in many schools, and believe that children should be taught about this topic at the age of ten,” states obstetrician and gynecologist Elena Ermakova, a recipient of the above-mentioned bonus, in an interview with Snob. She says that she always gives the woman time to think and advises what to do if, for example, she lacks money or support.

Sometimes cruder methods are employed to discourage abortion seekers. In conversation with Afisha Daily, women told how they had been insulted and made to feel guilty by doctors, whose consulting rooms often had posters reading “A real woman should give birth” on the walls.

Eighteen-year-old Tatiana from the town of Zavolzhye (438 km from Moscow) had no desire to give birth to a child from a man who had raped her in a nightclub toilet, but during the consultation she was told that “a girl with enough brains to screw around has enough brains to be educated,” she told Afisha Daily in 2019. The doctor offered her an abortion without anesthesia, saying that “the pain will force her to think twice in future about spreading her legs at any opportunity.” Tatiana ended up paying for an abortion privately, and for a long time afterwards reproached herself for doing so. She later got married, and is now planning a wanted pregnancy.

Maria, a mother of two, from the city of Stary Oskol, Belgorod Region (630 km from Moscow), decided to have her third child aborted back in 2018. After two very difficult births, she feared for her health. The doctor at the antenatal clinic, having tried to talk her out of it, gave Maria a document to sign acknowledging that “abortion at any stage of pregnancy is murder.” After that, they handed her a list of consultations required before the doctor would sanction the abortion. One of them was with a priest.

“I was so shocked that I just walked out. What nonsense. Why do I need permission from a church representative? What’s that got to do with my pregnancy?” Maria recalled in an interview with Lenta.ru. 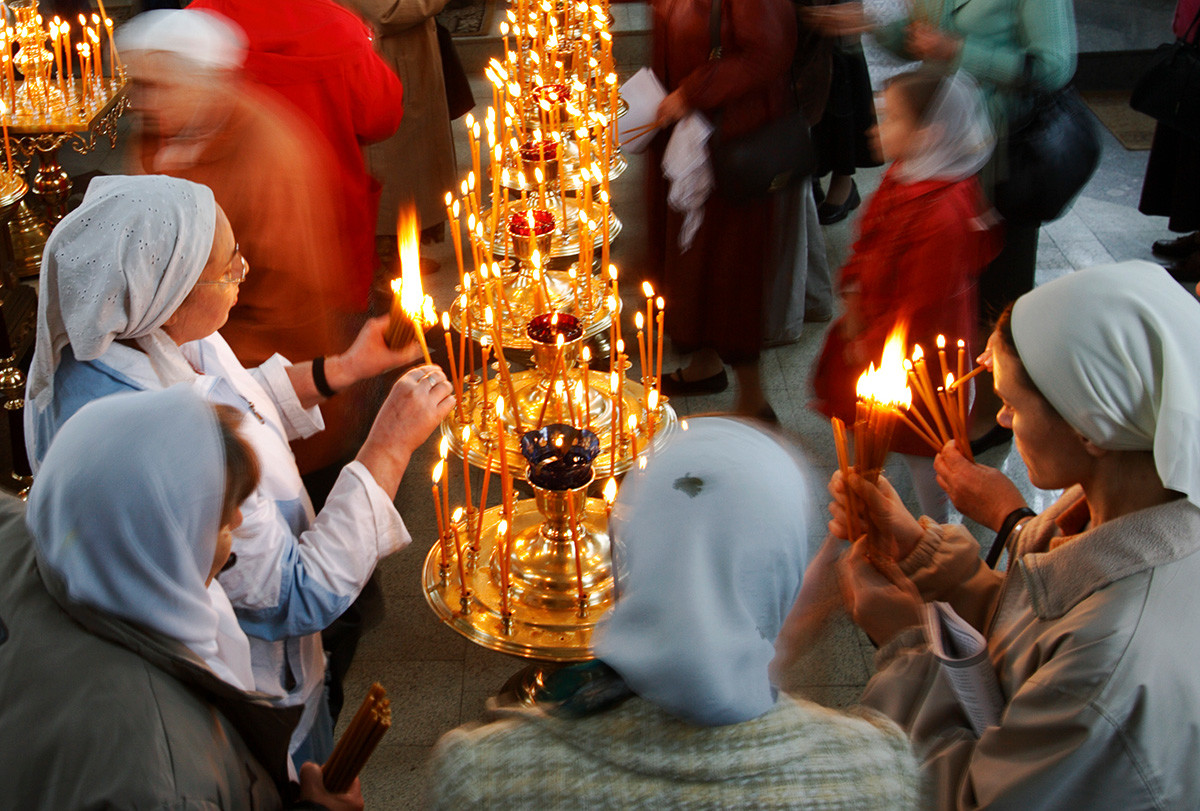 She created a private community on the social network VKontakte. It transpired that the practice had been going on since at least 2009, and that priests were in the habit of denying women abortions. As a result, some had gone private; others had kept their child.

For its part, the Russian Orthodox Church (ROC) states that the conversations with priests are voluntary, and can indeed be included in the medical file, but that this helps save the lives of children. Moreover, the head of the ROC, Patriarch Kirill, has twice requested the Russian authorities to make abortions available only privately, as well as to ban all abortion advertising and propaganda.

The ROC is also pushing for the right to life from the moment of conception to be enshrined in law.

“Abortion is the unwarranted destruction of the life of a human being, that is, murder. Therefore, there can be no talk of one’s ‘right to abortion,’ since that means the right to kill. Abortion cannot be recognized as a family planning method,” reads the text of the ROC’s proposal published on its website in 2019.

'A fifth child is not a fifth wheel'

“Don’t like children? Then sleep alone!”, “Preserve the life inside you,” and “A fifth child is not a fifth wheel” are just some of the slogans used by pro-life groups which, in unison with medical institutions, seek to dissuade women from having an abortion. 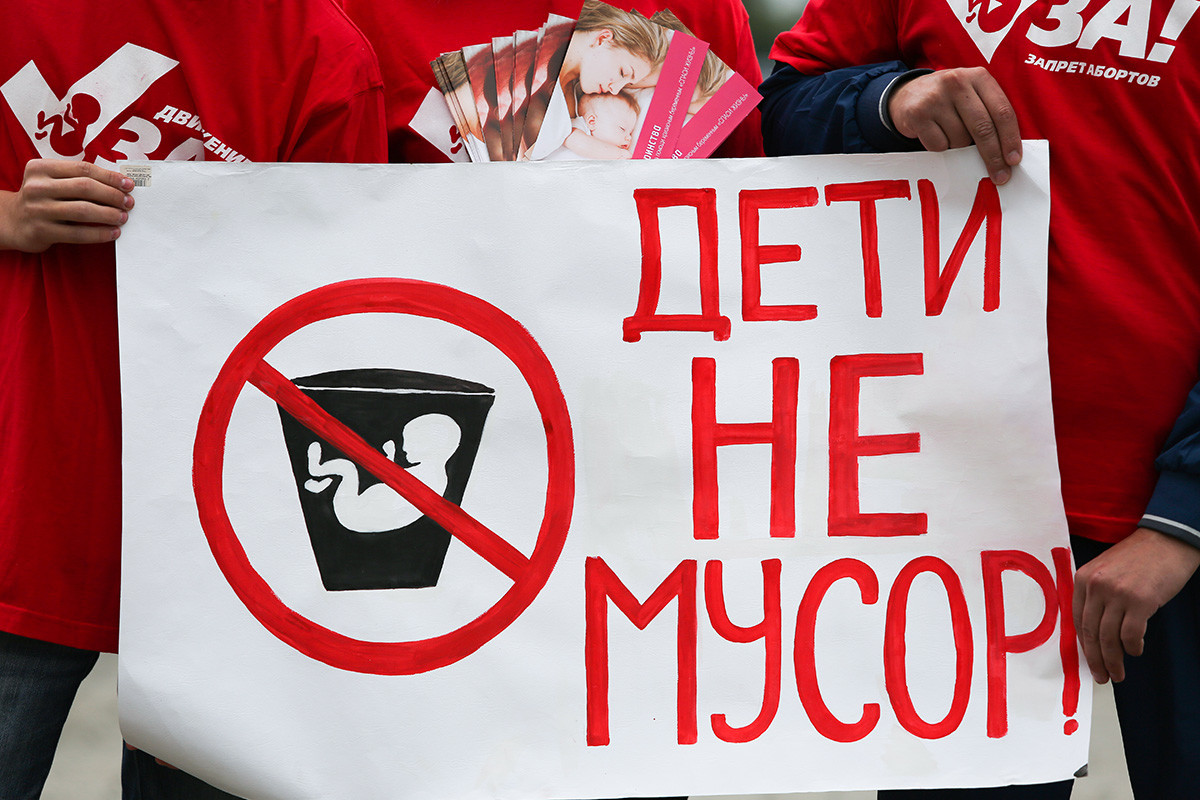 Anti-abortion movement activists held a poster saying "Kids are not a waste" in front of a perinatal center.

Members of such movements oppose not only abortion, but also hormonal contraceptives — in their view, such drugs cut short the life of the embryo, which is murder in all but name.

One of the largest communities of this kind, in existence since 2015, has managed to collect over a million signatures for a ban on abortion. The Za Zhizn (For Life) movement is active in 86 cities across Russia. Besides consultations, its activists help put expectant mothers in touch with lawyers, social workers, and psychologists, and provide financial assistance.

During consultations, volunteers use embryo models — special dolls with “skin” similar to that of a real child. Before an abortion, the woman is asked to hold such a doll so that she understands that “behind cold medical terms like fetal egg and embryo are real children,” activists explain. According to the movement founders, about 15 percent of women they consult decide not to go ahead with an abortion, in contrast to 10–12 percent elsewhere. 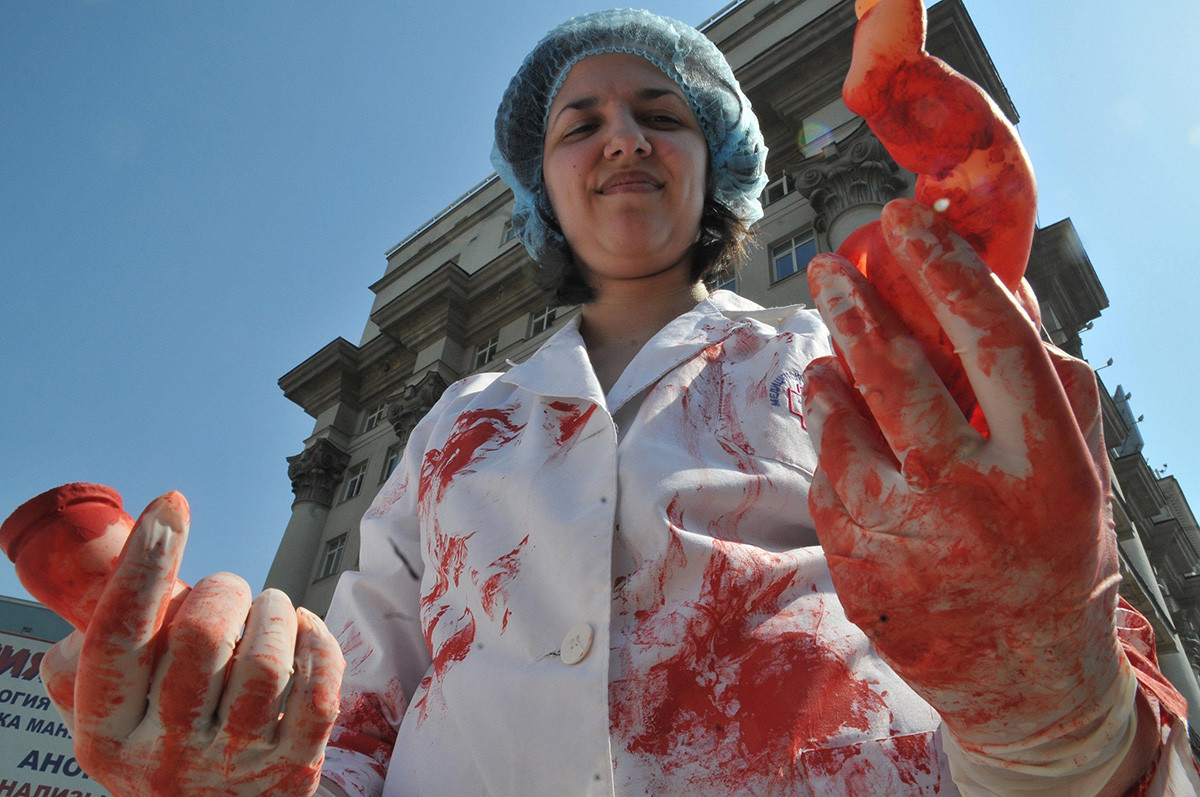 Anti-abortion demonstration in central Moscow. Participants of the rally hold limbs from a doll covered in red paint

The community’s Instagram account posts positive stories about childbirth, including 14-year-old mothers, cases of successful childbirth in a coma, and reports suggesting that mothers of multiple children are less likely to get cancer.

Natalya Moskvitina, founder of the similar Zhenschini za Zhizn (Women for Life) movement, said in a 2016 interview with Wonderzine that affordable contraception corrupts young people and leads to more pregnancies and abortions. In the same interview, she said that even minors should give birth.

“Pregnancy of minors is not a topic worthy of debate. If you as a mother and father failed to bring up your child properly, and suddenly face becoming grandparents, so be it,” believes Moskvitina.

Forty-two-year-old Moscow resident Maria Abga describes such movements as fraudulent. In July 2020, she wrote to several of them seeking help to deal with an unplanned pregnancy. Only Moskvitina answered, but simply sent a broken link to a website about the dangers of abortion. 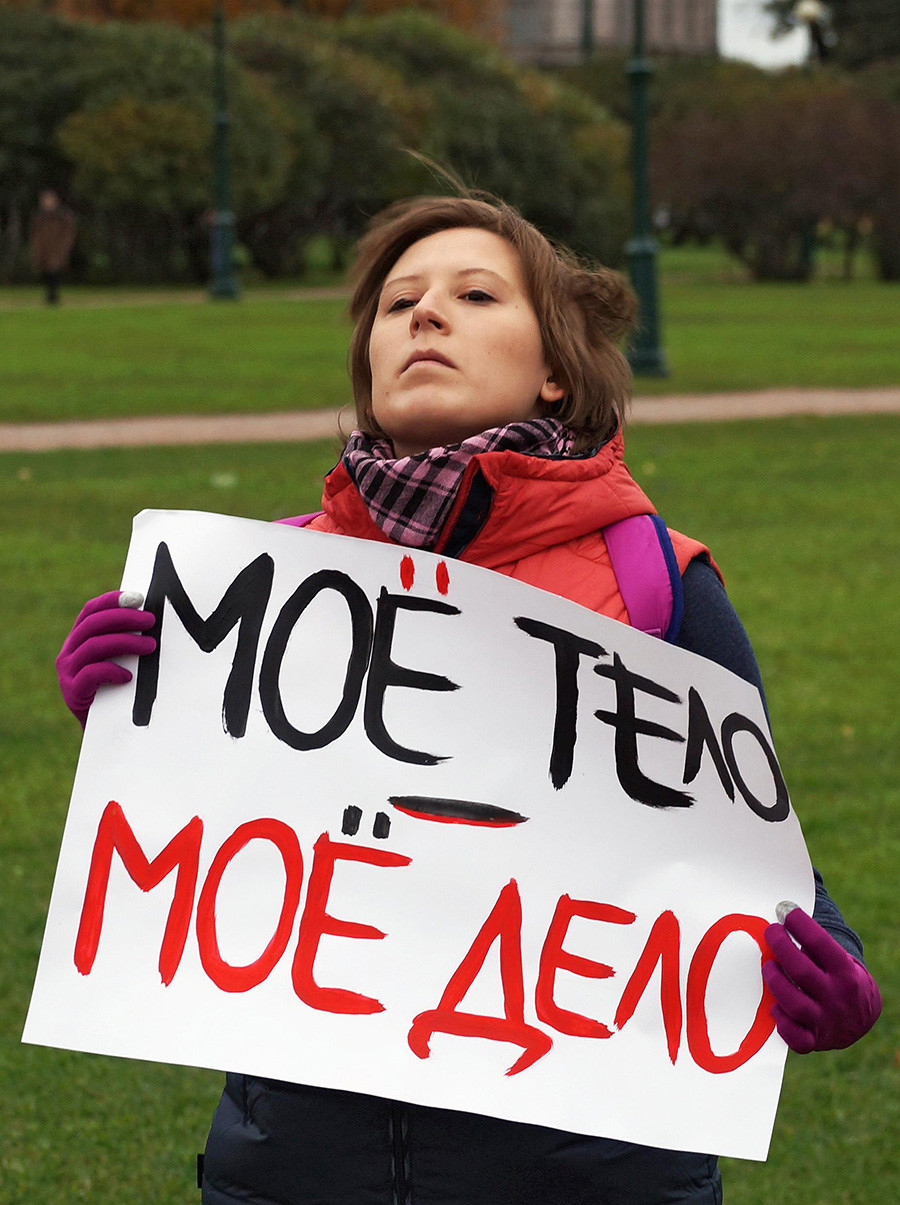 A feminist defends women's rights for abortions: "My body, my business"

“And then she immediately forgot about me. Why? But because I’m 42 and on my page it’s written that I’ve had cancer treatment. Pro-life movements don’t need people like me even if we pay. They need young, stupid girls to make sensational TV reports. That way they rake in more dough,” Abga is sure.

Dying to be born

In the past 20 years, the number of Russians opposed to abortion has tripled, according to a 2018 survey by the Levada Center. The share of people who consider abortion unacceptable stands at 35 percent against only 12 percent back in 1998.

Children's Rights Commissioner Anna Kuznetsova is another advocate of a ban on abortion, having proposed in May 2020 to cut funding for abortion clinics and restrict the sale of abortion drugs in pharmacies. 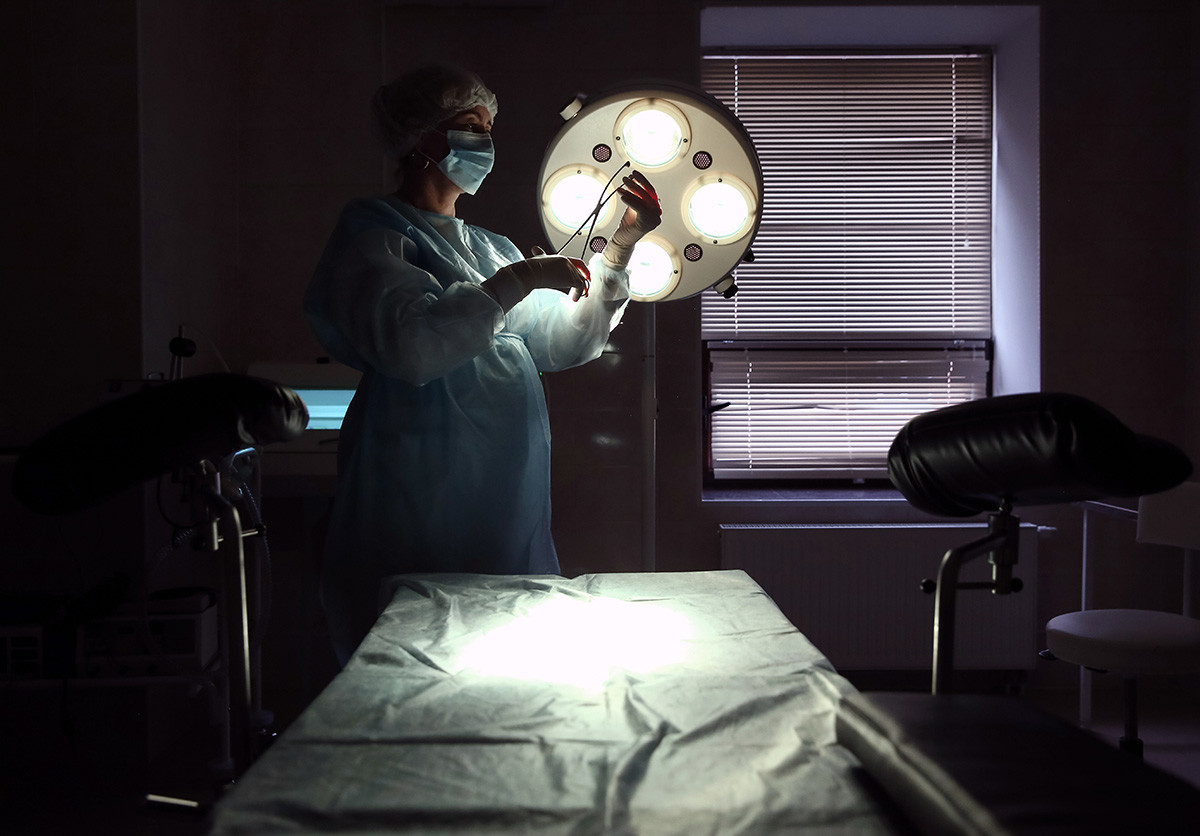 An operating room of a hospital’s department of gynecology.

The initiative was opposed by Irina Kirkova, deputy chair of the Presidential Council for Civil Society and Human Rights, who stated said that “women should be able to receive medical care provided under the law to prevent pregnancy.”

Likewise, the ROC’s stance on abortion is not totally unyielding.

“In cases where there is a direct threat to the mother’s life during pregnancy, especially if she has other children, it is recommended that leniency be shown,” reads the document “Basis of the Social Concept of the Russian Orthodox Church,” adopted back in 2000. 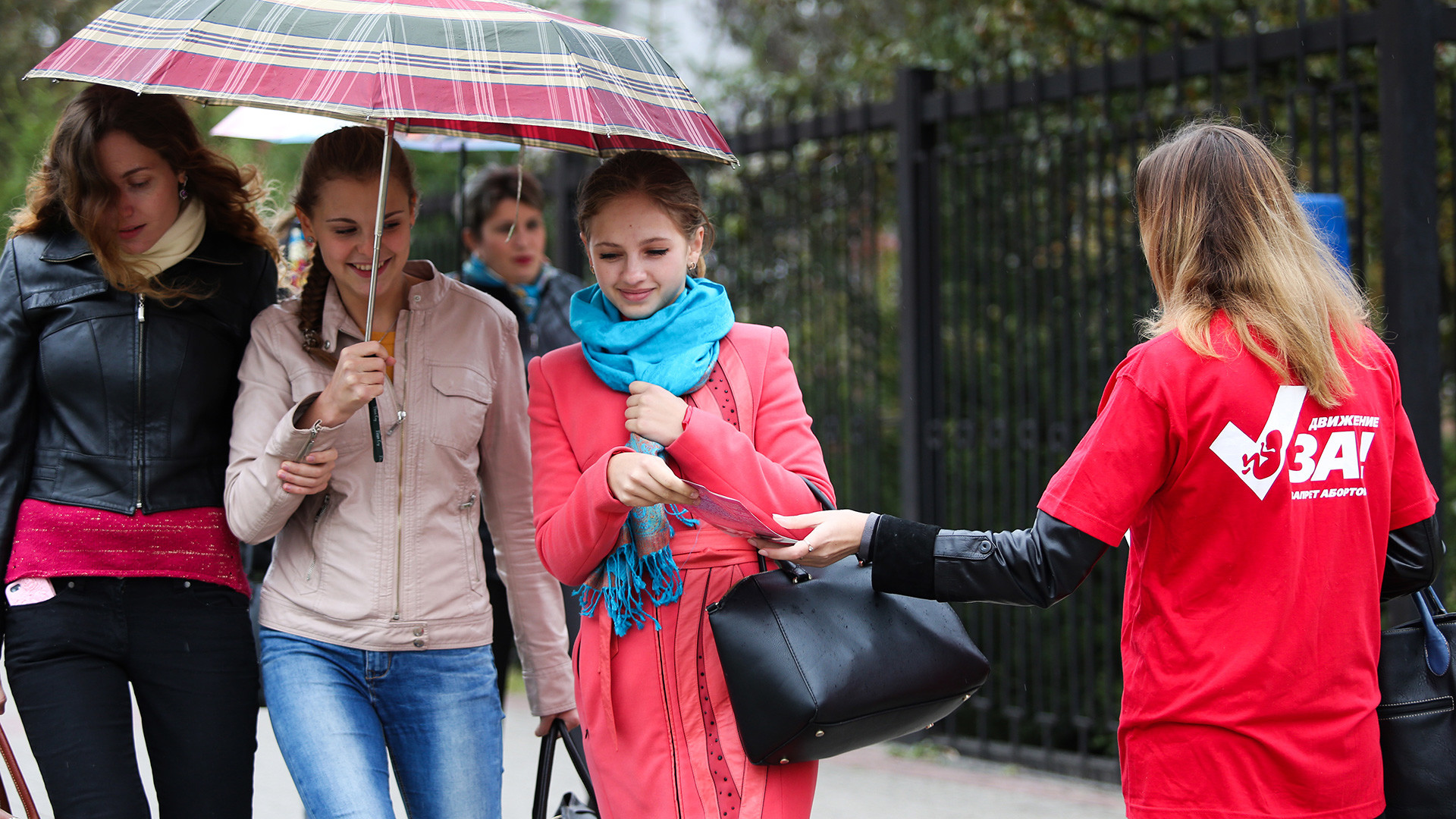 Patriarch Kirill himself admits the possibility of abortion if the mother faces the choice of whose life to save: hers or the child’s.

“The decision, of course, lies with the mother. But the Church says that her life should take priority. In this case, she is absolved from sin because her actions are dictated by circumstances,” explains the patriarch.