How Russia is tackling domestic violence 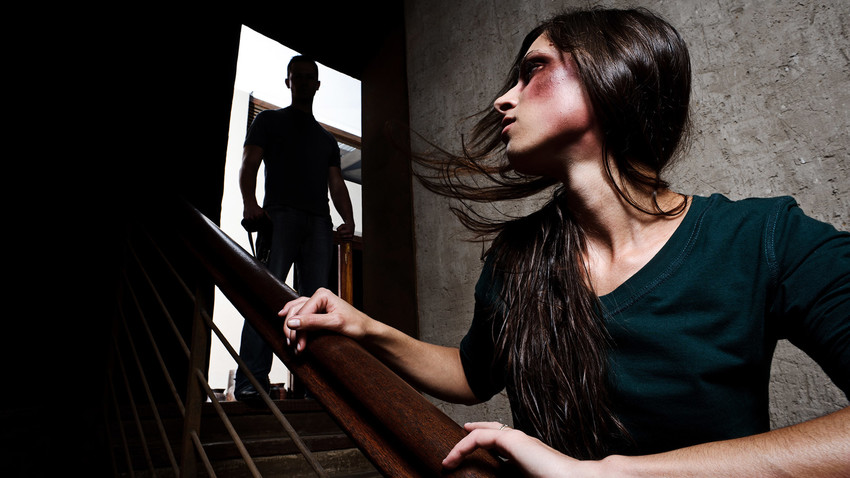 Getty Images
This depressing topic is cropping up more and more in the media, but there is still no law to punish “domestic” criminals.

“You need to be psychologically ill to pick up a camera and say: ‘God, my husband beats me.’” Why don’t you think about what you did to make him hit you?” These words spoken by blogger and TV presenter Regina Todorenko in an interview with PeopleTalk in April 2020 cost her Glamor magazine’s Woman of the Year title and advertising contracts with Pepsi&Co and Pampers.

“Three years ago, or even two, no one would have raised an eyebrow at Regina’s statement. All glossy magazines would have said, ‘So what? It’s true, chicks are basically stupid and enjoy being hit!’ But today the mental fog has cleared a bit,” notes Russian feminist Zalina Marshenkulova.

Todorenko later apologized for her words, made a YouTube documentary about domestic violence titled “What did I do to help?”, and donated two million rubles ($28,000) to Violence.net, an organization for victims of domestic abuse.

In 2017, 59 percent of Russians supported the idea of ​​reclassifying domestic violence as an administrative, not criminal offense, and 19 percent considered it acceptable in some cases to strike one’s spouse or child, according to a survey by the All-Russian Center for the Study of Public Opinion (VTsIOM). But by the end of 2019, the situation had changed: 90 percent of Russians considered any physical violence unacceptable, and a further 50 percent stated that assault and battery in the home were unforgivable. Why the change in Russian attitudes towards domestic violence?

The #MeToo global movement came to Russia in 2018. For the first time, many Russians spoke publicly about how they had suffered harassment and physical and psychological violence. After that, Russian women began launching online flash mobs, including against domestic violence, for example, by uploading photos with artificial bruises in support of other women, or talking under various hashtags about how they themselves were victims of violence or harassment. 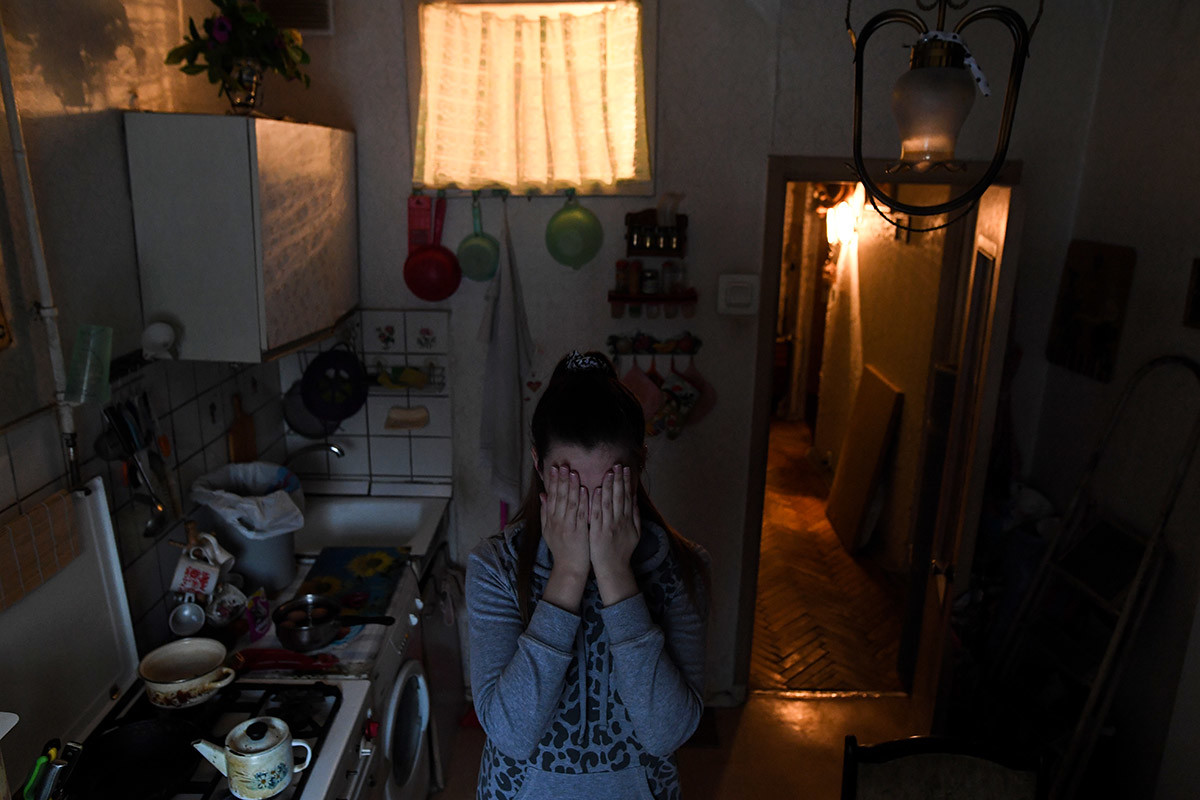 Alexandra from Moscow, 26, a victim of domestic violence

Russian celebrities helped raise even more awareness of the problem. Pop singer Olga Buzova, Agata Mutseniece, ex-wife of actor Pavel Priluchny (The Silver Spoon TV show), singer Nargiz Zakirova and others all told about how they had suffered domestic violence.

“The first time he raised a hand against me, I was six months pregnant. He pushed me onto the bed with all his strength, and I banged my head against the wall. I didn’t file for divorce. Quite the opposite, I tried to justify his behavior, telling myself he’d had a bad day at work,” Zakirova said in 2018 about her now ex-husband.

In 2017, 33 percent of Russians acknowledged that they knew someone who had experienced domestic violence, and in 2019 that number rose to 40 percent, VTsIOM reports.

It is not known exactly how many Russian women are subjected to domestic violence, but in 2019 the social organization All-Russian Parental Resistance cited the figure of 16 million women who endure physical and psychological violence every year.

In 2020, the number of cases of domestic violence in Russia continues to grow, partly influenced by the coronavirus pandemic. During the lockdown, it increased by 2.5 times, Tatyana Moskalkova, Commissioner for Human Rights in Russia, stated in May 2020. In late April, State Duma deputies proposed opening shelters for victims of domestic violence during the quarantine period, but the Interior Ministry denied the reports of a rise in the number of victims.

In the past two years, the number of headline-grabbing incidents has also gone up, provoking public outpourings of shock and sympathy.

“Dmitry hit my hands with an ax. I fell, but he continued to strike my hands with the ax, at least ten times. On the way [to the hospital] Dmitry kept repeating out loud: ‘What adrenaline!’” This quote is from the testimony of 27-year-old mother-of-two Margarita Gracheva, a resident of the town of Serpukhov near Moscow. On Dec. 11, 2017, in a fit of jealousy, her husband took his wife to the forest and attempted to chop off her hands. He had already threatened her, and she had filed a complaint with the police, but the matter was not taken further. After the savage attack, Dmitry drove Margarita to the hospital, then turned himself into the police. 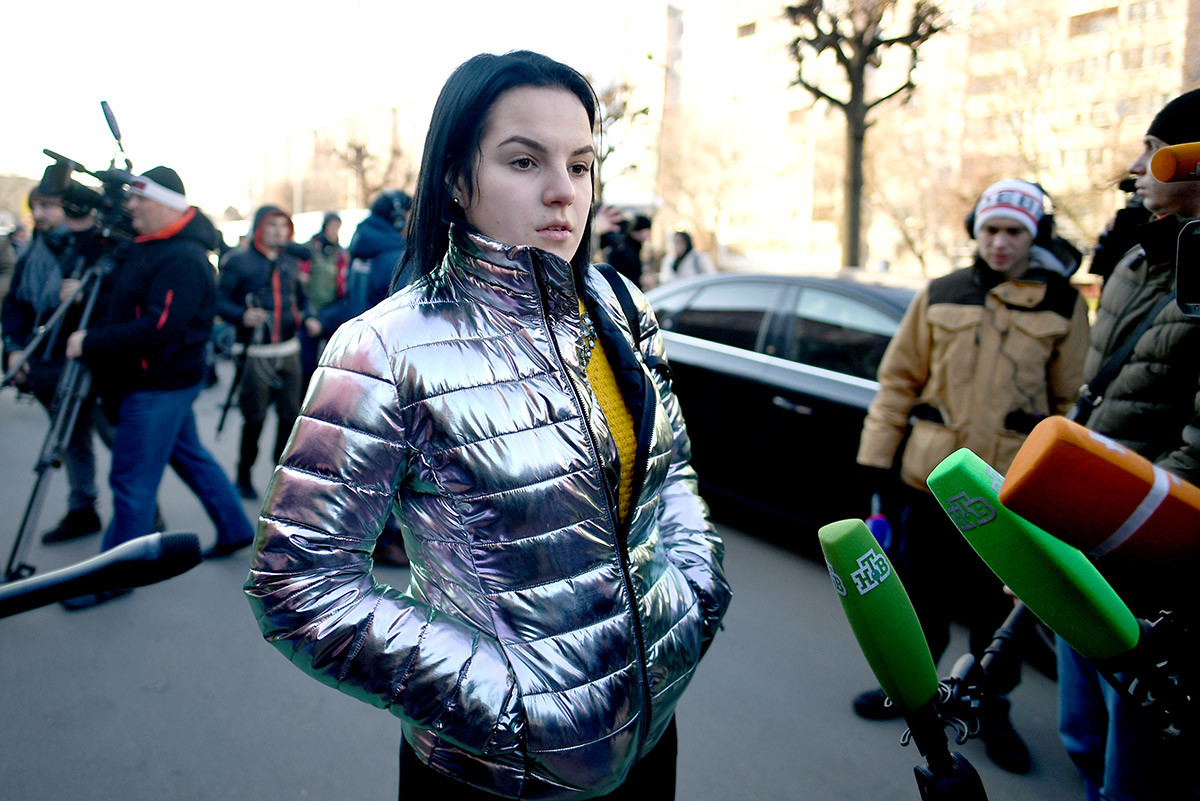 The incident made the national news, and women set up a support group for Margarita in social networks. The court found Dmitry guilty and sentenced him to 14 years in a strict regime penal colony. Doctors managed to partially recover her left hand, while her right had to be replaced with an artificial limb. She says she made a good recovery after the trauma, and has even written a book about it.

An equally talked-about case was that of the three Khachaturian sisters, who in the summer of 2018 killed their own father after enduring many years of domestic and sexual violence. After lengthy proceedings and public protests, the investigators refused to reclassify the charge as self-defense, which means that, if found guilty, the girls face 8–20 years in prison for conspiracy to murder. Rallies were held in support of the sisters, and a petition demanding their acquittal has so far gathered around 400,000 signatures. For the time being, the sisters remain in custody; the criminal case against them was filed with a Moscow court only in July 2020. 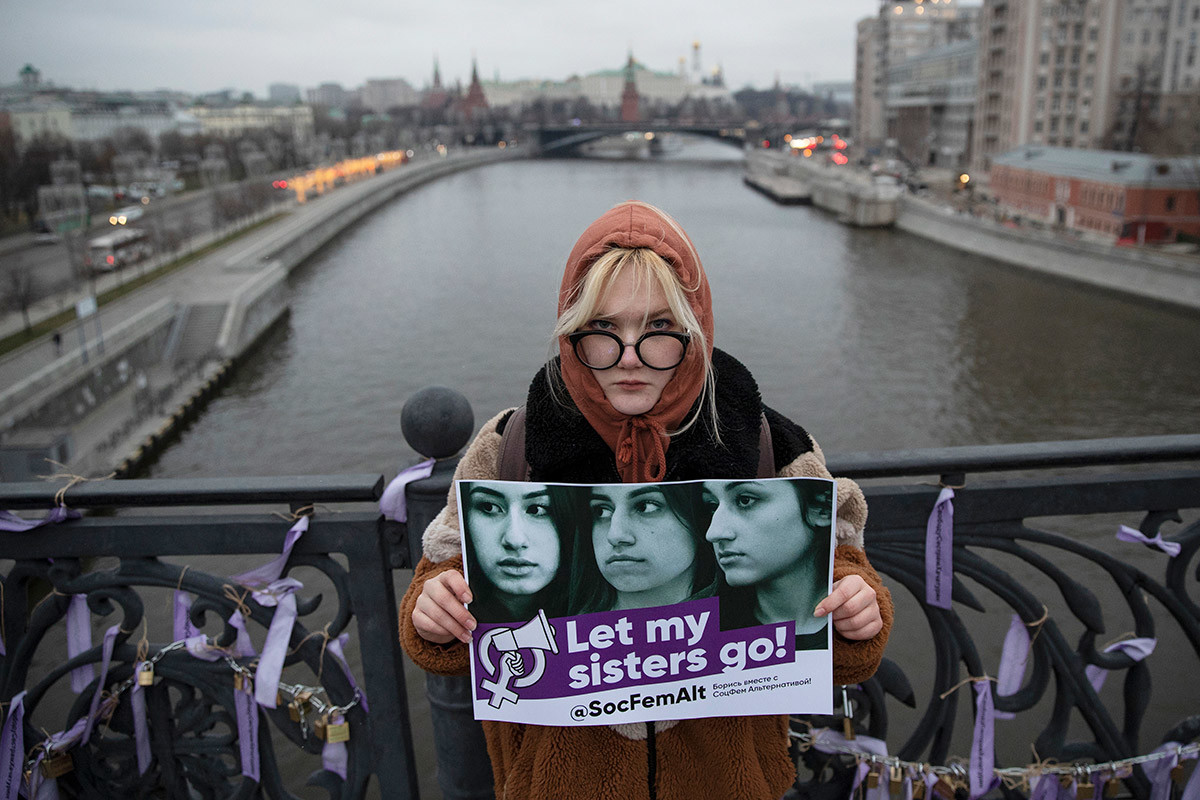 In the spring of 2020, two high-profile cases against young children produced a public outcry. In April, neighbors found a six-year-old boy beaten to death by his mother in a flooded apartment in Novorossiysk. And in April, a court in the town of Bugulma (Tatarstan) acquitted a man accused of raping his 18-month-old baby daughter. After a mass flash mob on Twitter demanded that the rapist be sentenced, the acquittal was repealed, and the case sent for retrial. The man himself eventually admitted that he had inflicted sexual injuries on his daughter after a quarrel with his wife.

“Openness, the ability to speak out about difficult things, and the desire to support and help others underpin the movement against violence. Documentary films about domestic abuse, high-profile cases and celebrities who talk about their experiences have a strong influence on public sentiment. People have started talking openly about domestic violence, recognizing it as a problem that requires preventive measures. Russian attitudes are changing,” says psychologist Ziyada Saydutova.

In turn, public opinion has an impact on the life and safety of ordinary people, she continues. In particular, online information portals, helplines and support centers for victims are gaining popularity in Russia, and the unacceptability of domestic violence is becoming ingrained.

Waiting for a law

In Russia, the draft law on the prevention of domestic violence has yet to be adopted. The final text of the bill was published on the website of the Federation Council in November 2019, but the wording came in for widespread criticism. The Federation Council had planned to revise and adopt it in the spring session of 2020, but this did not happen.

Instead, the law on the decriminalization of domestic beatings has been in force in Russia since February 2017. Under the law, the first reported case of domestic violence is classed as an administrative violation, not a criminal offense, punishable with a fine of 5–30,000 rubles ($70–$425) or 15 days’ community service or arrest. 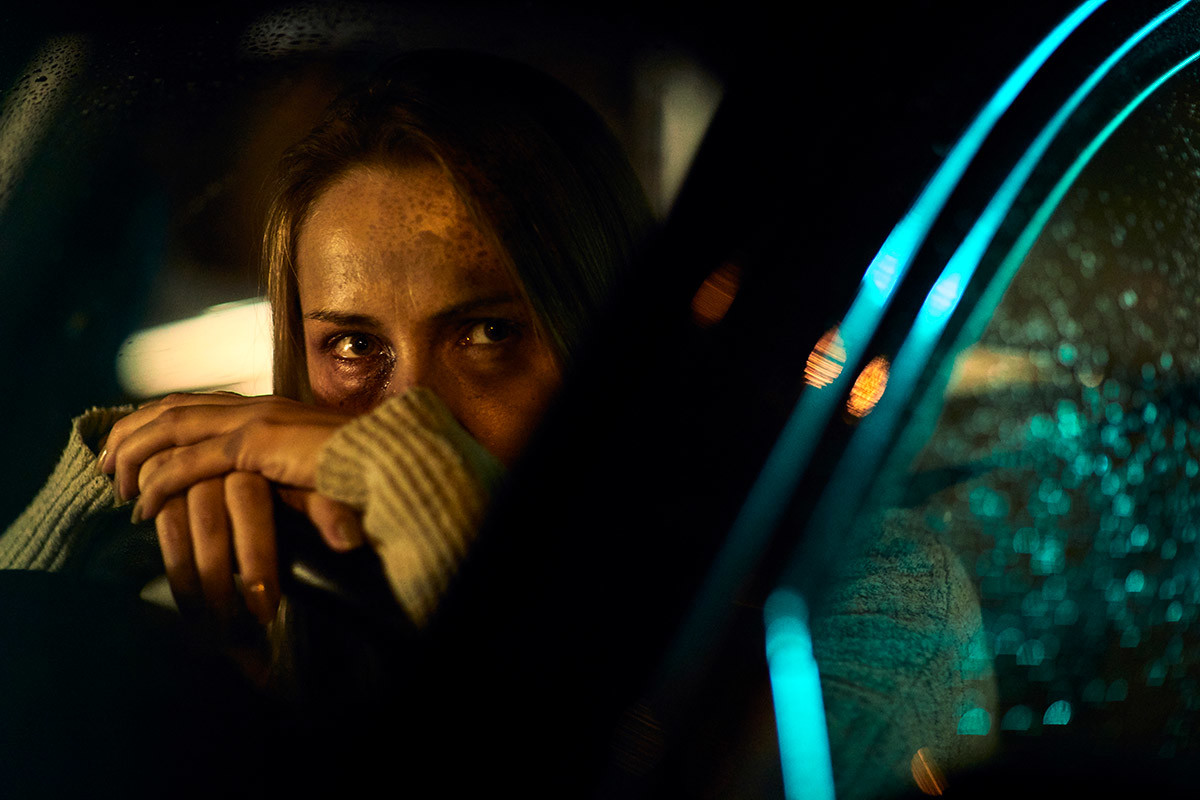 The second reported case is registered as a criminal offense, for which the fine rises to 40,000 rubles ($564) and the community service or arrest to up to three months. That said, any physical injury caused on the first occasion can result in two years in prison.

However, the main problem is not the presence or absence of legislation, but law enforcement practice. According to Sulim, law enforcement agencies are unwilling to consider victims’ statements if there is no visible sign of injury, and courts tend to be lenient on offenders.

“Therefore, control over the implementation of legislation needs tightening, which requires not so much revising the legal framework as strengthening the actions of law enforcement agencies and the structures supervising them,” explains the lawyer.

At the same time, Russian law stipulates no preventive measures against violence—for example, the right to prohibit offenders from communicating with or approaching their victims. Nor are there penalties for violation of such prohibition, adds Sulim.

“If the law were adopted, it would significantly reduce the number of cases of domestic violence, because potential perpetrators would be restrained by the fear of criminal or administrative punishment,” she concludes.