5 unique Russian watches being made now 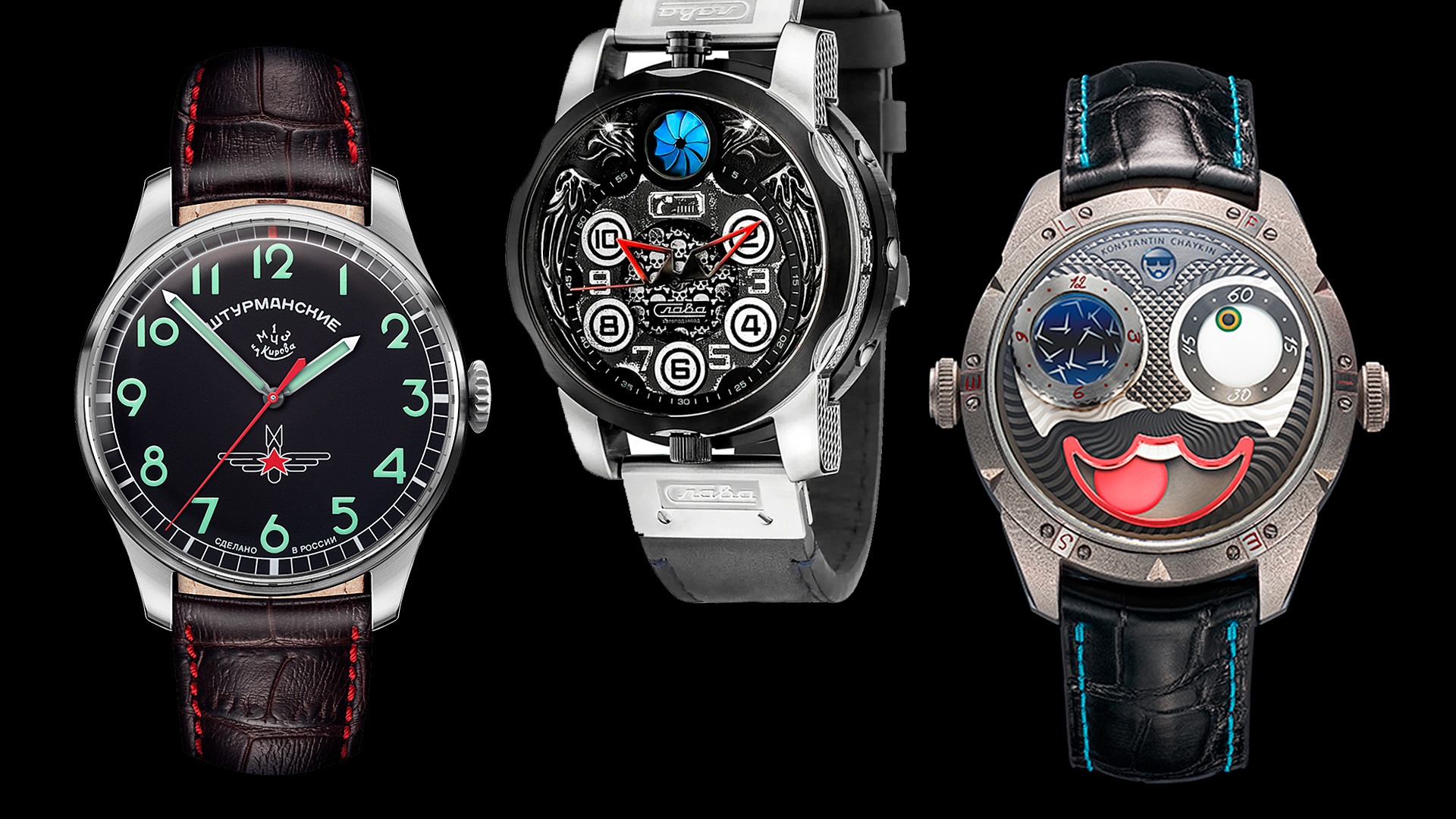 chaykin.ru; sturmanskie.ru; slava.su
The Russian watchmaking industry is going through a creative renaissance and has produced all kinds of unique models in recent years, ranging from a reproduction of Yuri Gagarin’s famous Sturmanskie watch to the world's first watch for measuring the time on Mars. 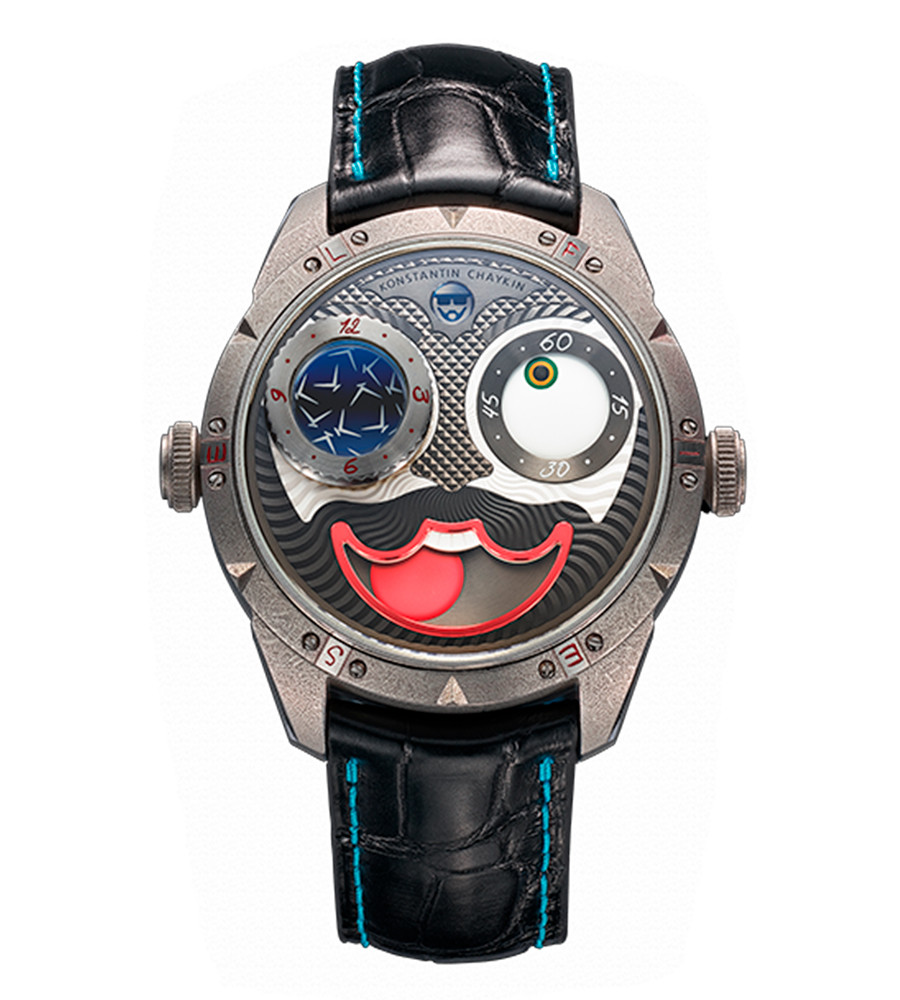 This model designed by Russia's most highly awarded watchmaker, Konstantin Chaykin, is well known throughout the world of watch connoisseurs. Chaykin's workshop has been in operation for 18 years, and during this time he has invented a number of revolutionary watch movements that gained him access to the world of Haute Horlogerie. To date, Chaykin is the only Russian admitted to the prestigious international Academy of Independent Creators in Watchmaking (the Académie Horlogère des Créateurs Indépendants, or AHCI).

Joker is not just a watch but also one of Chaykin's inventions. The dial is made in the form of the Joker's face. The hour and minute hands have been replaced with rotating discs that form the Joker’s eyes, while the phases of the Moon are indicated by the Joker's trademark smile. The watch’s unique movement has been recognized internationally—to such an extent that three years ago the Clown watch, a variation of the Joker model, was awarded the watchmaking industry's Oscar, a special prize of the Grand Prix d'Horlogerie de Genève. This was the first time in history that a watchmaker from Russia won the prize.

All parts of Joker are made exclusively by hand and to get a hold of one you will need to get put on a waiting list (Chaykin's manufactory specializes in limited editions and produces no more than 100 timepieces a year). 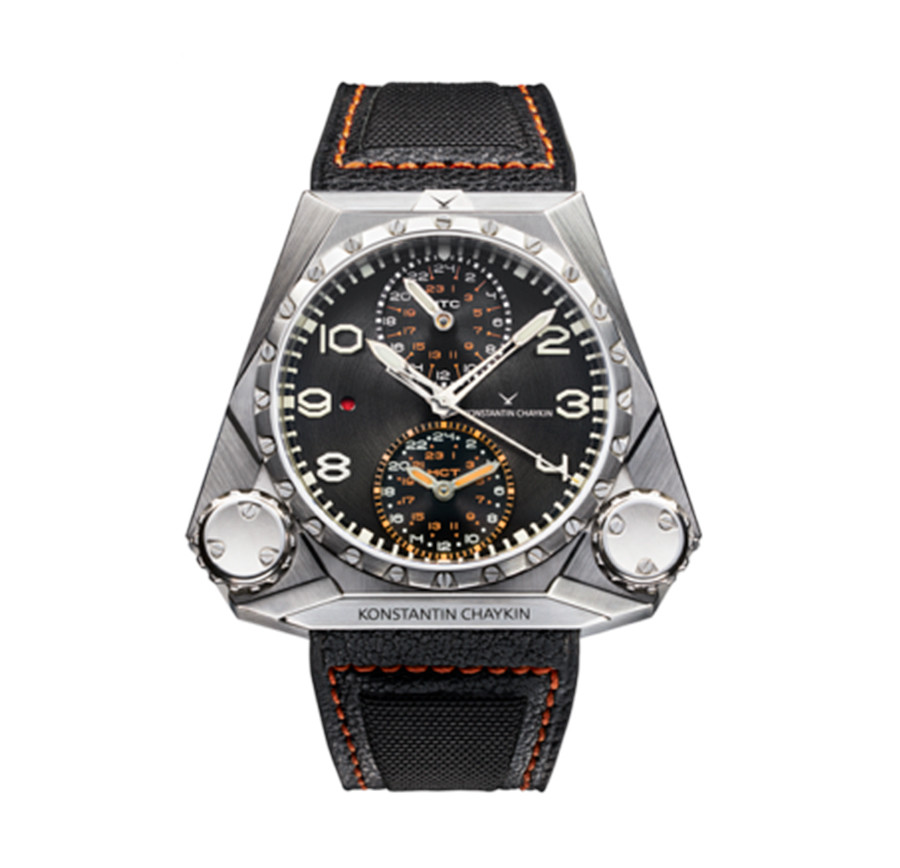 The "Martian Chronicles" project is several years old. When Elon Musk announced that humans would soon colonize the red planet, Chaykin was inspired to create a watch that would tell the time...on Mars. After creating a number of prototype pieces, a model went into production in 2020, although only eight finished timepieces will be made.

The watch’s titanium case resembles spacecraft docking bays. The hands on the dial are in the shape of booster rockets. The biggest hands show the time on Earth, while at the 6 o'clock mark there is an additional dial that simultaneously displays the time on Mars. The model also includes a Mars calendar indicating dates in sols (a sol is a solar day on Mars). Chaykin designed and patented a unique mechanical movement that makes this exercise in cosmic mechanics possible.

3. Polyarnye watch from the Raketa factory 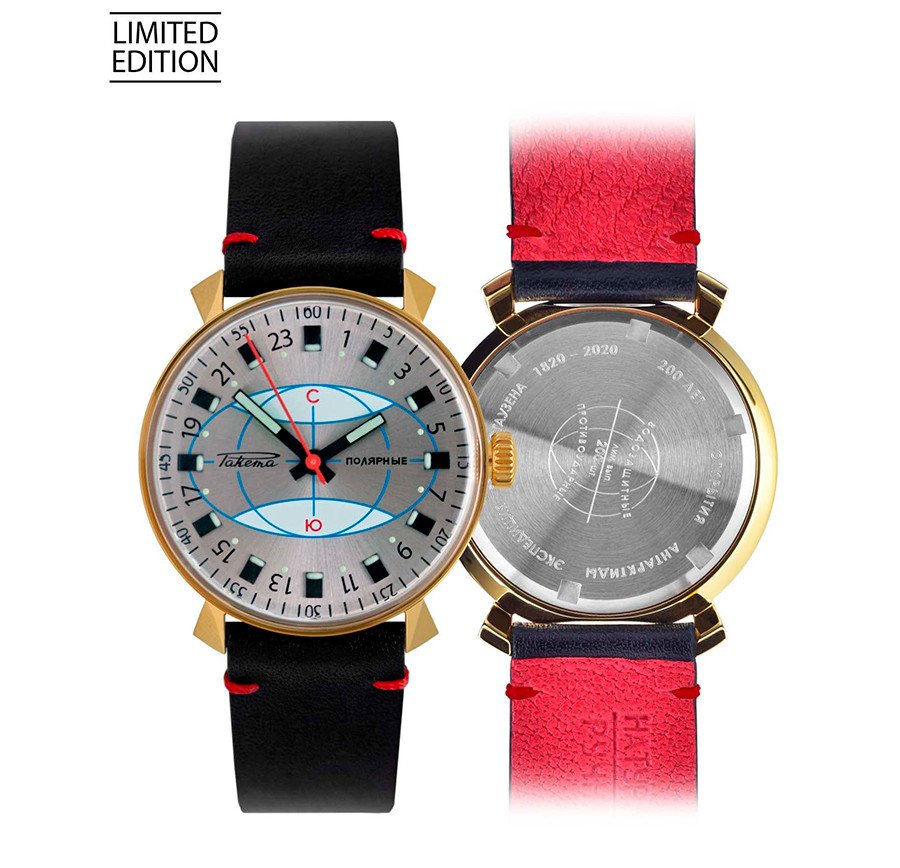 This watch factory in Peterhof takes pride in its 300-year history. In recent years, the factory has been modernized with the help of French consultants and aristocrats with various long-standing ties to Russia (the family of Count Pahlen, for instance, played a role in the plot against Emperor Paul I). The newly-relaunched Raketa factory took off several years ago, and the enterprise has ambitious plans. Watch collectors are on the look-out for Soviet-era watches, and the factory’s new owners are convinced that today's productions will be greeted no less enthusiastically, both domestically and abroad.

The Polyarnye watch is a replica of a legendary 1970s model that never entered series production (and is thus particularly coveted by collectors). The watch was made specially for polar expeditions, and its uniqueness lies in its mechanism, which is able to cope with just about any non-standard requirements. It is difficult to tell when it is daytime in the Antarctic, and so the time is not indicated by a standard 12-hour dial but rather with a 24-hour one. The modern Polyarnye only differs from the original in a couple of minor details. Moreover, it is made using the same Soviet-period machine tools as the original. The limited-edition model was released last year. 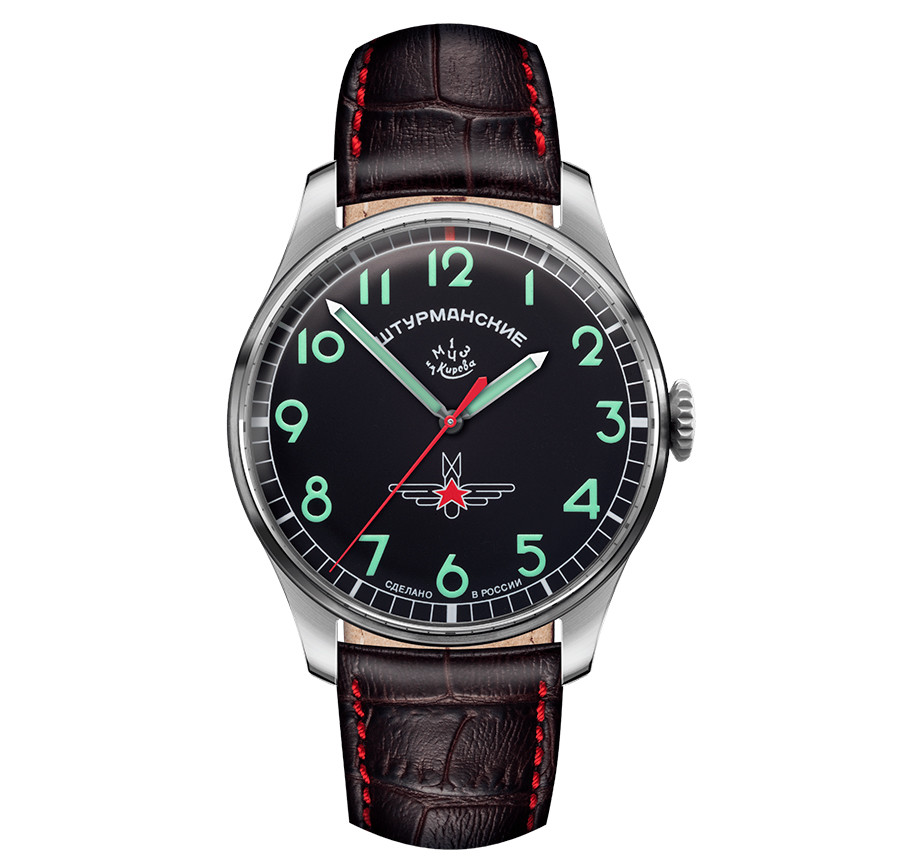 Poljot, or the First Moscow Watch Factory, was a legendary Soviet plant that made up to a third of the USSR's watch output. However, after perestroika it broke up into several smaller companies, and its famous watch lines were distributed among various brands and copyright holders. The Sturmanskie model, which had once been made for Soviet pilots (production of this series began in 1949, but only for the air force, and the watches were not sold to the public), went to the Volmax Group, which makes them today under the Sturmanskie brand name.

Gagarin wore the Sturmanskie when he went up into space. The model has several basic versions. The most famous and popular one is the Gagarin Heritage. The watch is mass produced and reasonably priced, but, just as in 1961, it is fitted with the highly accurate trademark Poljot 2609 movement that was developed in house. To mark this year's 60th anniversary of the first flight into space, a limited jubilee edition of the watch —an accurate copy of the original Gagarin watch—has been released with commemorative engraving.

5. Russian Roulette from the Slava factory 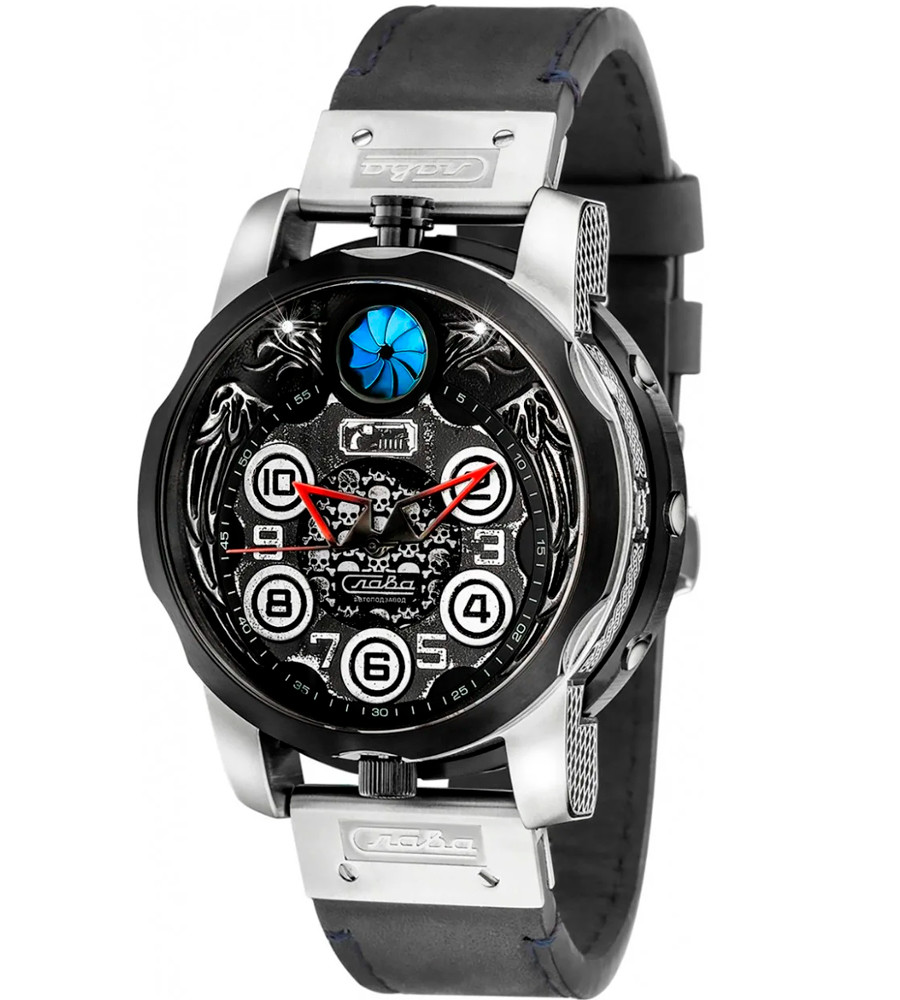 The Slava factory (formerly the Second Moscow Watch Factory) is another watchmaker with a complicated past. In the 2000s, it belonged to a bank before being ultimately auctioned off. The assets (technical designs, rights to its unique movements) were acquired by the Verny Khod (Right Move) watch company, which in subsequent years bought out the actual brand name. These days, Verny Khod makes reproductions of many historic Slava models, which were once worn on just about every Soviet wrist.

Russian Roulette is perhaps the most notorious contemporary Russian watch. The idea for this unique model was born in 2017 as part of a collaboration with the Russian actor, Ivan Okhlobystin, who suggested a design based on a revolver with a single bullet in its cylinder. It took three years to finalize the design. The result is a mechanical watch with an additional feature in the form of a revolving disc with a bullet. By rotating the cylinder, just as in the Hussars' game of chance, you can tempt fate and a window in the upper part of the dial tells you whether you won or lost. If luck is against you, you will see a bullet engraved with a skull and crossbones in the window. The mechanism driving the disc's movement and stopping the bullet in one of the chambers is stabilized with 16 magnets. According to the designers, the watch is also good for one’s health since it is similar to magnetic bracelets that are worn to normalize blood pressure.