5 secrets of the famous Kremlin Clock 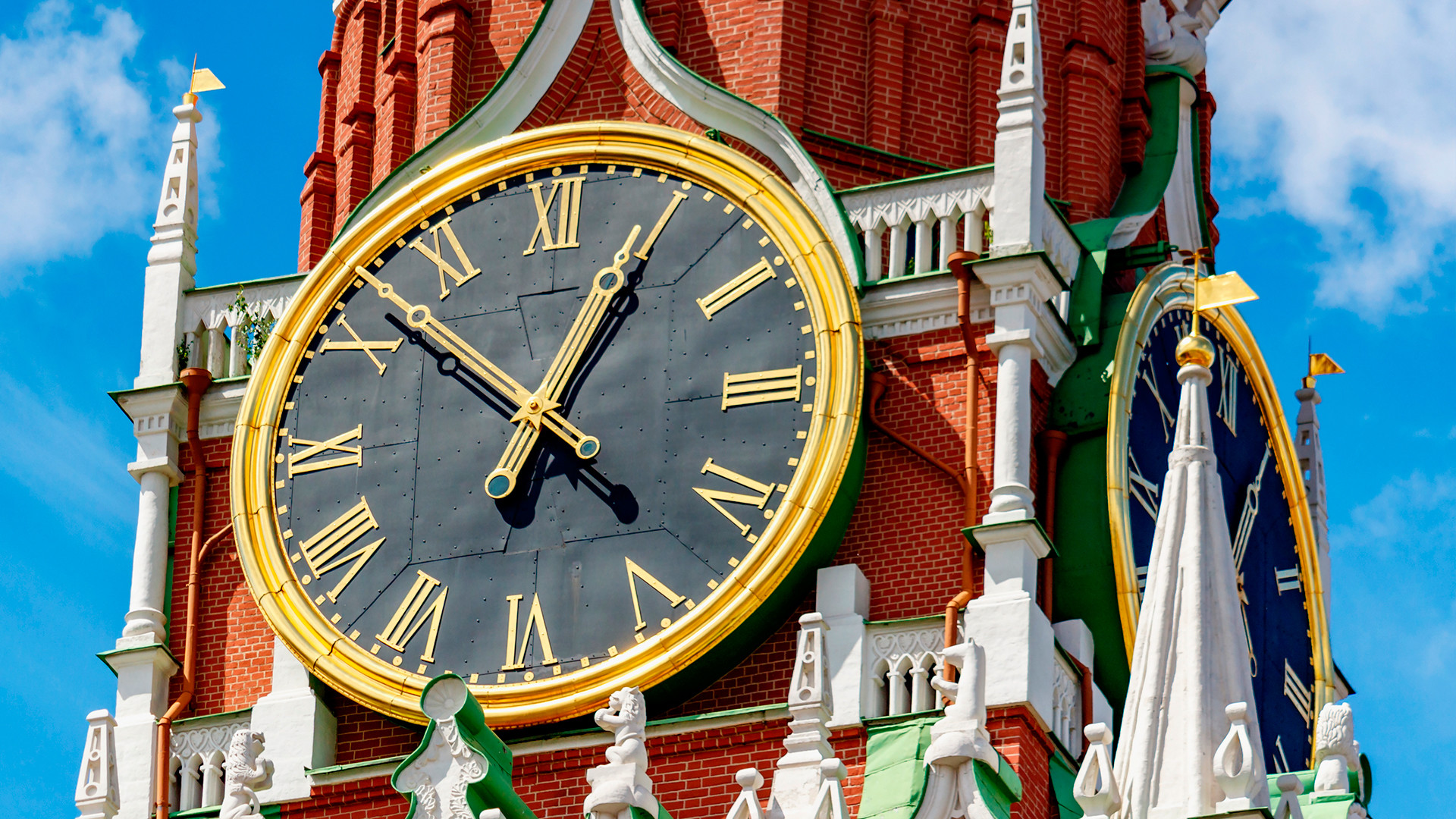 Legion Media
Why did Russia's most famous clock have its bells replaced, and what melodies do they play?

From a young age, every Russian knows the clock on Spasskaya Tower in the Moscow Kremlin because its chimes symbolically mark the beginning of each new year. Let’s find out the main secrets of the country's main clock. 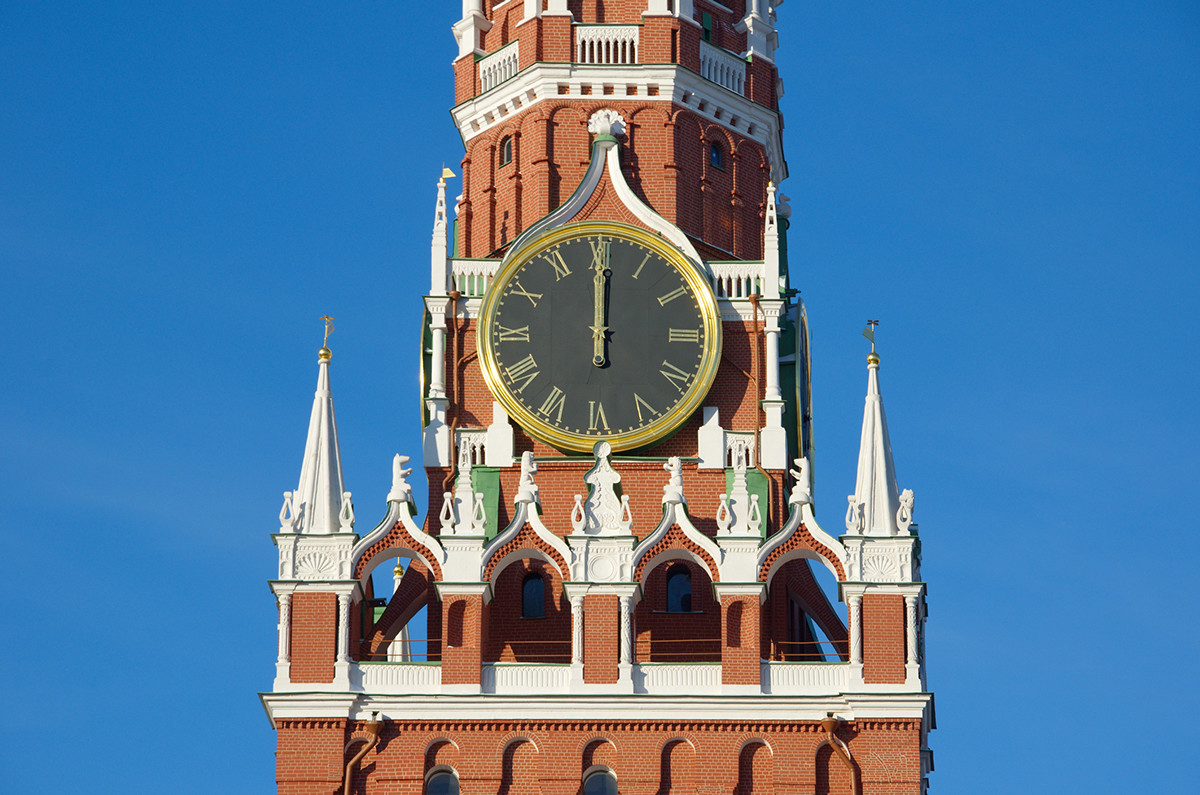 The clock on Spasskaya Tower plays the Russian national anthem at six in the morning, noon, six in the evening and midnight, while the chorus to Glinka's Glory comes on at three and nine in the morning and then again at three in the afternoon and nine in the evening. In other words, the chimes can be heard every three hours. In addition, the main bell strikes every hour. Most famously, every New Year the whole country counts down to this clock striking midnight since the celebrations here are broadcast by all TV channels and radio stations across Russia.

The chimes initially played different tunes. At first, it was the Preobrazhensky Regiment March dating back to Peter the Great's rule and the unofficial anthem of the Russian Empire, How Glorious is Our Lord in Zion by Dmitry Bortniansky.

“In the USSR, at first they tried to use The Internationale and You Fell Victim [a Bolshevik funeral march], but after 1938 the bells on Spasskaya Tower did not play any melodies except for a chime every quarter-hour,” says Konstantin Mishurovsky, a bell ringer at the Moscow Kremlin and the Cathedral of Christ the Savior. “It was only in the 1990s that it was decided that after the quarter-hourly and hourly chimes the bells would perform the Russian anthem and Glinka's Glory.”

2. This is actually the fifth clock to grace Spasskaya Tower 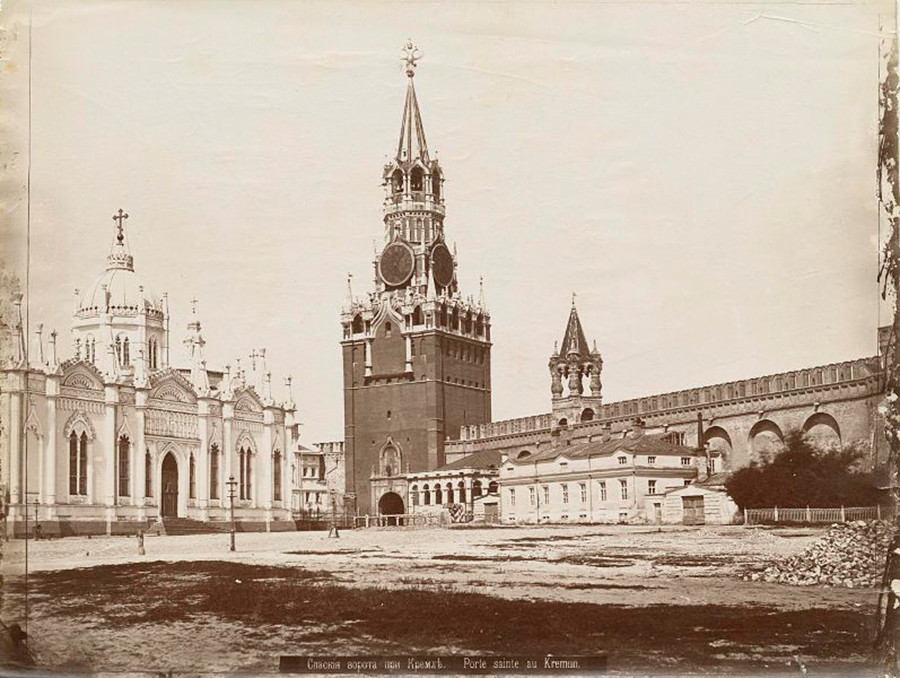 The first clock on Spasskaya Tower (which was called Frolovskaya at the time) appeared right after its construction in 1491. Nothing is known about what that clock looked like. But we do know that when the clock broke down, it was sold for scrap to the Spassky Monastery in Yaroslavl for the princely price of 48 rubles (in the early 17th century, one ruble could buy you a herd of sheep).

A second clock was installed during the reign of Mikhail Fyodorovich, the first tsar from the Romanov dynasty (1596-1645). For its construction, they invited Scottish clockmaker Christopher Galloway. He created an absolutely amazing device in which it was not the hands but the dial that moved. The clock face was painted in the color of the sky, with tin stars and an image of the sun attached it to. A ray of that sun served as a clock hand, and the bells rang every hour. Time then was divided in nighttime and daytime hours, measuring the time between dawn and sunset. At dawn, the clock showed one o'clock daytime and at sunset one o'clock nighttime. In the summer, a day could last 17 hours, so the dial was divided into 17 sections. The clock burned down in a fire in 1701.

The third clock was installed in 1709 by a decree from Peter the Great. This one was a modern-type clock from Holland since by then the tsar had switched the country to the 24-hour standard of time used in Europe. The clock had 33 bells that played melodies and rang each hour. In addition, the bells were used to alert Muscovites to fires in the city. This clock also burned down, in a fire in 1737.

The fourth clock was installed under Catherine the Great in 1770. This one was an English clock that was installed by a German clockmaker named Fatz. He turned out to be a man with a quirky sense of humor and set the chimes to play the song Oh, You Dear Augustin. The tune was used as the clock's chime for around a year until an order was issued to replace it. The clock remained in a good working order for several decades and even managed to survive Napoleon's invasion of Moscow. It was only in the middle of the 19th century that the clock's condition deteriorated to the point that it needed to be replaced.

Finally, the present-day clock was installed in 1852. It is the work of two clockmakers of Danish origin, named Ivan and Nikolay Butenop. They installed new black dials on all four sides of the tower, replaced the old mechanisms and selected 35 new bells from Kremlin towers based on their distinctive tones.

The clock was hit by a shell during the 1917 revolution. It was restored a year later by order of Vladimir Lenin, and still continues to work.

3. The clock's mechanism weighs as much as 25 cars 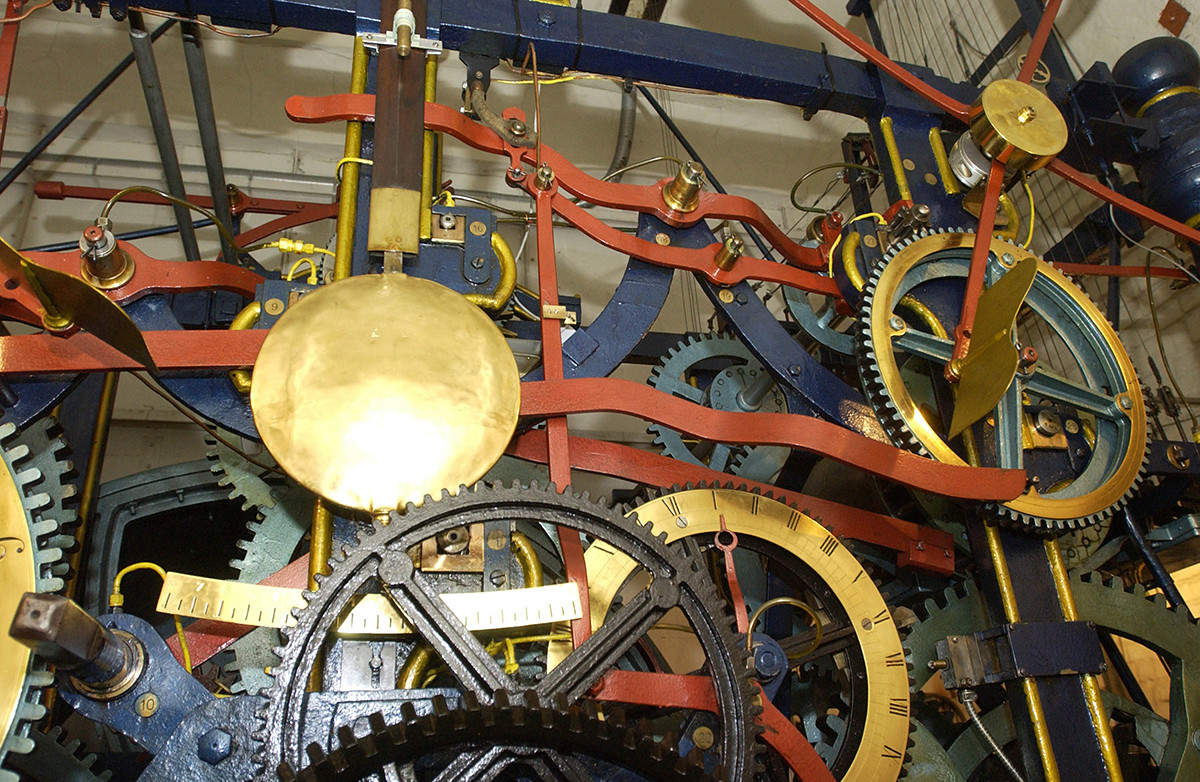 Without the bells, the clock mechanism weighs 25 tons and consists of several thousand parts. It is about 3 meters high, while its gears each span one and a half meters in diameter. The clock is fitted with a 32-kilogram pendulum and three weights ranging from 160 to 224 kilograms each. The musical mechanism looks like a copper cylinder rotated by a weight. The drum makes the pins press on the keys, which in turn are connected with cables to the bells on the belfry.

The main bell, which rings out the number of hours, weighs over two tons, while the largest musical bell weighs over a ton.

4. New Russian bells were tuned to a Dutch one 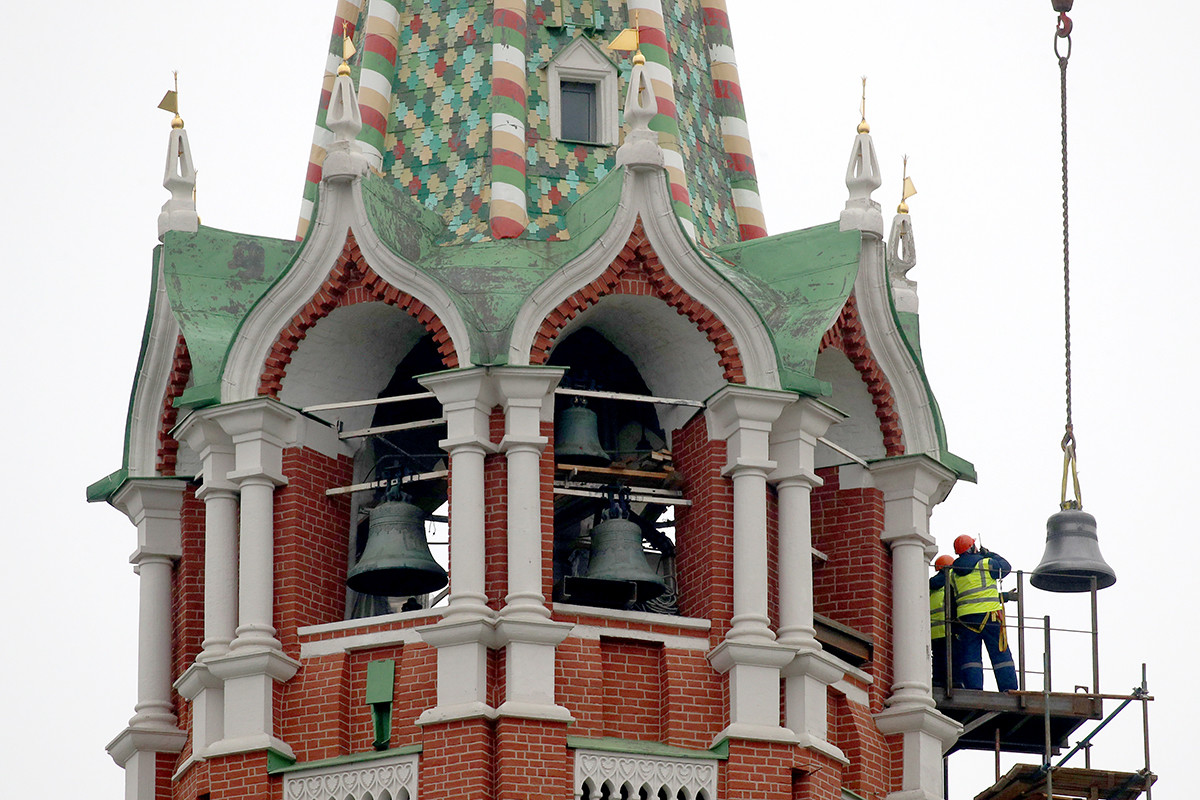 Until recently, the Kremlin Clock used 17 bells (maximum there were 35 bells), which eventually needed to be replaced. Now the clock has 23 bells, only one of which is one of the original bells. There are also nine small bells that strike quarter-hours, plus a large Dutch bell that was ordered in the 1990s. This is the one that weighs more than a ton.

In November 2020, 12 new bells were installed on Spasskaya Tower. These were cast in the southern Russian city of Voronezh specifically for the Kremlin Clock. Specialists spent more than a year tuning the new bells to the Dutch one. In the end, some bells had to be thinned from the inside in order to lower their tone, and some even had to be cast again from scratch. The tuning was supervised by the conductor of the Presidential Orchestra, Yevgeny Nikitin.

5. New Year starts with the first strike of the Kremlin Clock 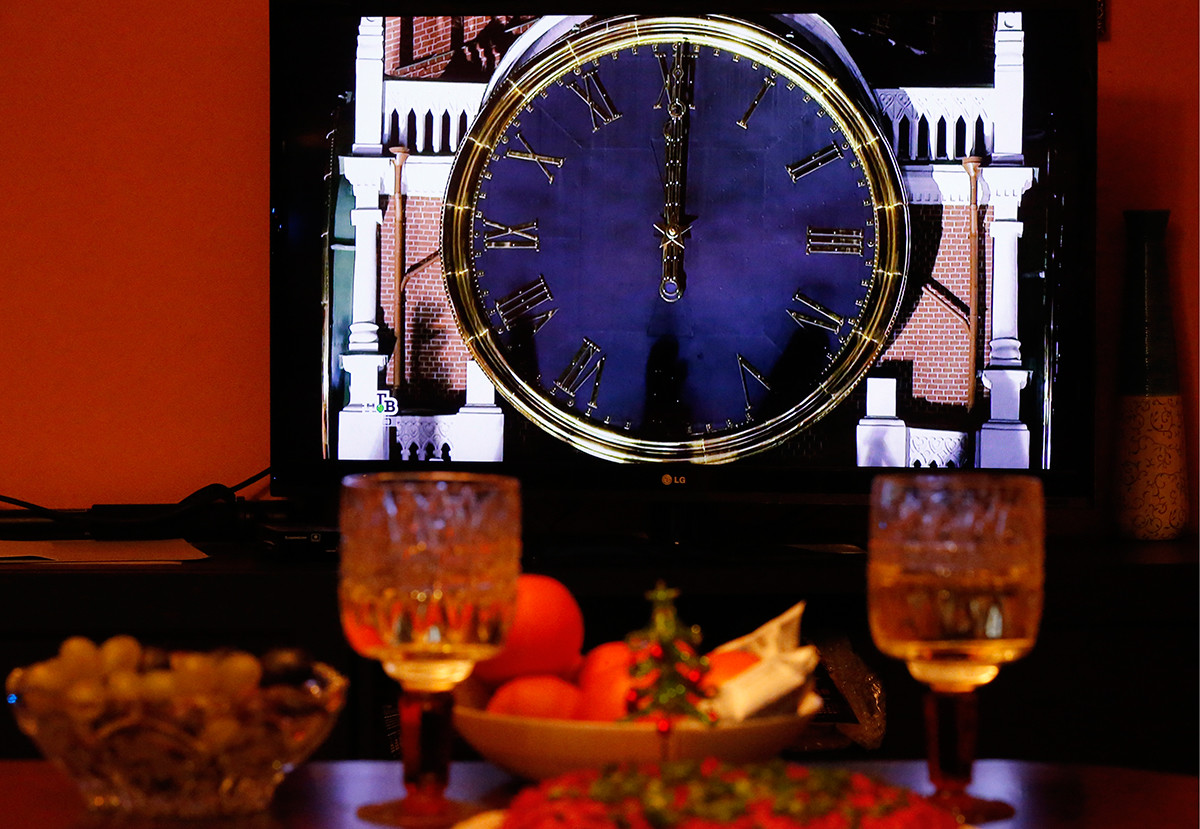 Waiting for the New Year.

One of the traditions that Russians have for New Year's Eve is to write their greatest wish down on a piece of paper, burn it and then place the ashes into a glass of champagne that must be drunk before the Kremlin Clock strikes 12:00, ringing in the New Year. This tradition began in Soviet times, when people learned the exact time from the radio and a new hour began with the last pip. The tradition of televised new year addresses to the nation was introduced in 1970 by Soviet leader Leonid Brezhnev, whose speech was followed by the strikes of the Kremlin Clock that were broadcast throughout the country. 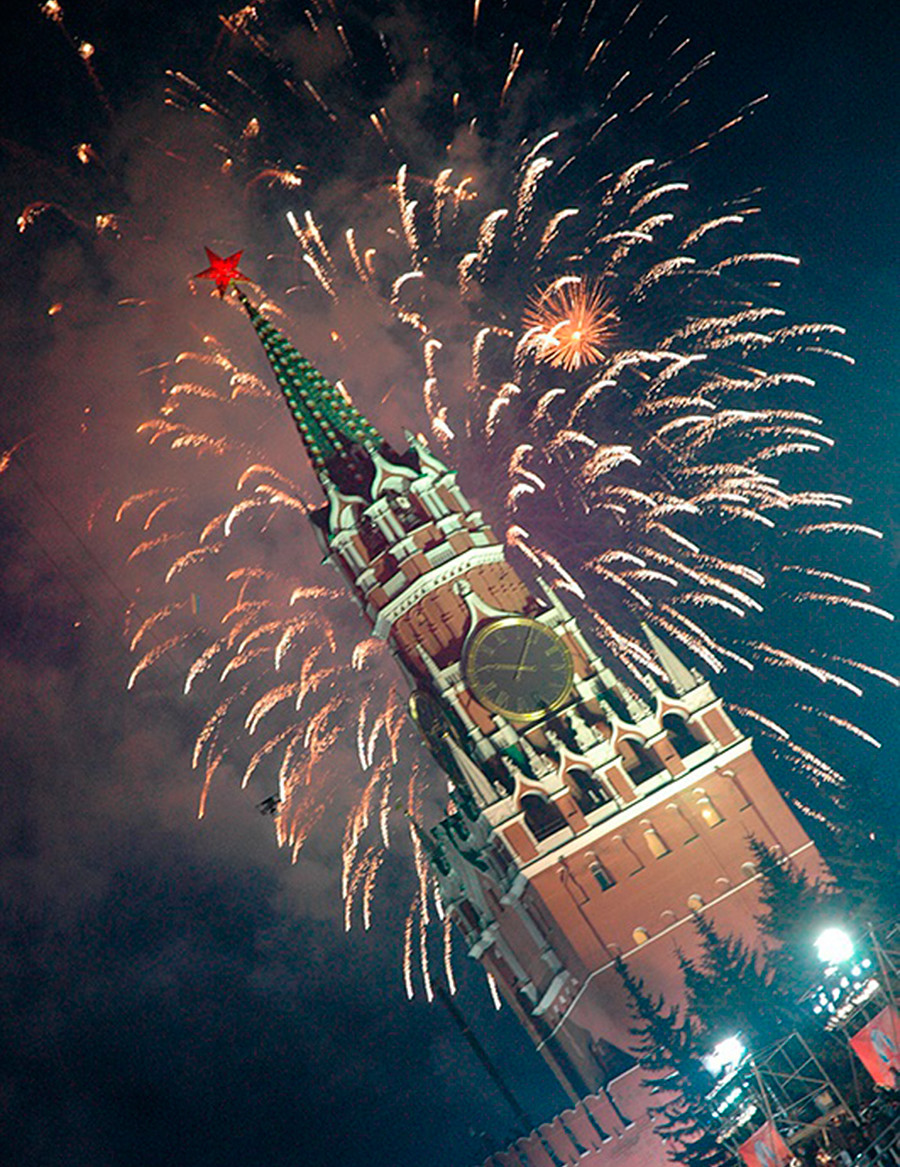 The New Year on the Red Square.

However, it turns out that the new year doesn’t actually begin with the last strike of the clock, but rather 20 seconds before the first strike so that the beginning of the chime and the 12 strikes are already part of the new year.