Where outside Russia can you find Stalin's skyscrapers? 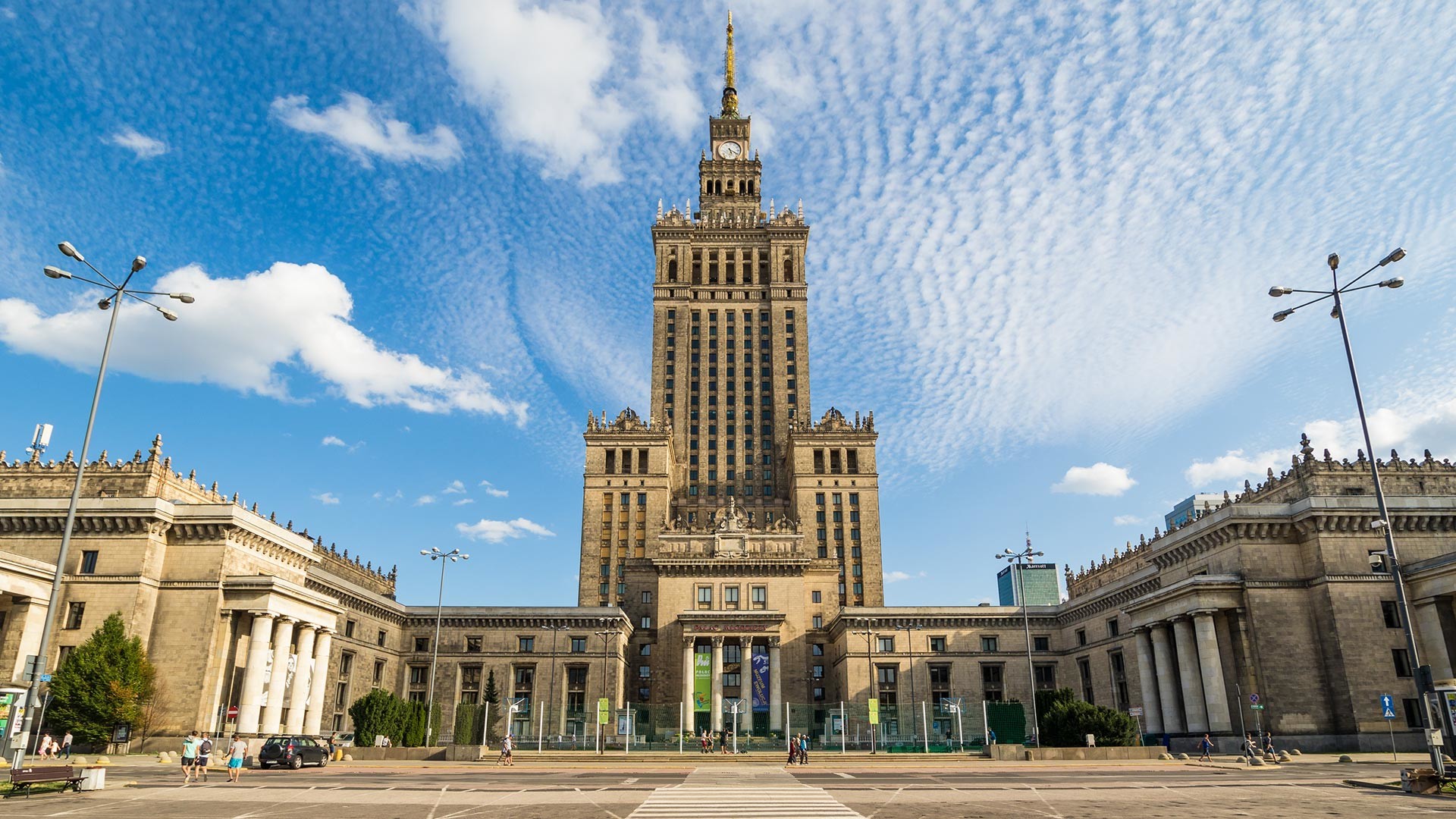 The Palace of Culture and Science, Warsaw.

Legion Media
These Soviet skyscrapers are still regarded as some of the tallest and most spectacular buildings in their countries.

The Seven Sisters, which were built at Stalin's behest in the 1940s and 1950s, are some of the most famous and instantly recognizable buildings in Moscow. Following Soviet designs, similar buildings in what became known as Stalinist "Empire style" were soon built abroad as well. These included not only residential buildings, but also hotels, office buildings and even an Academy of Sciences.

Palace of Culture and Science, Warsaw 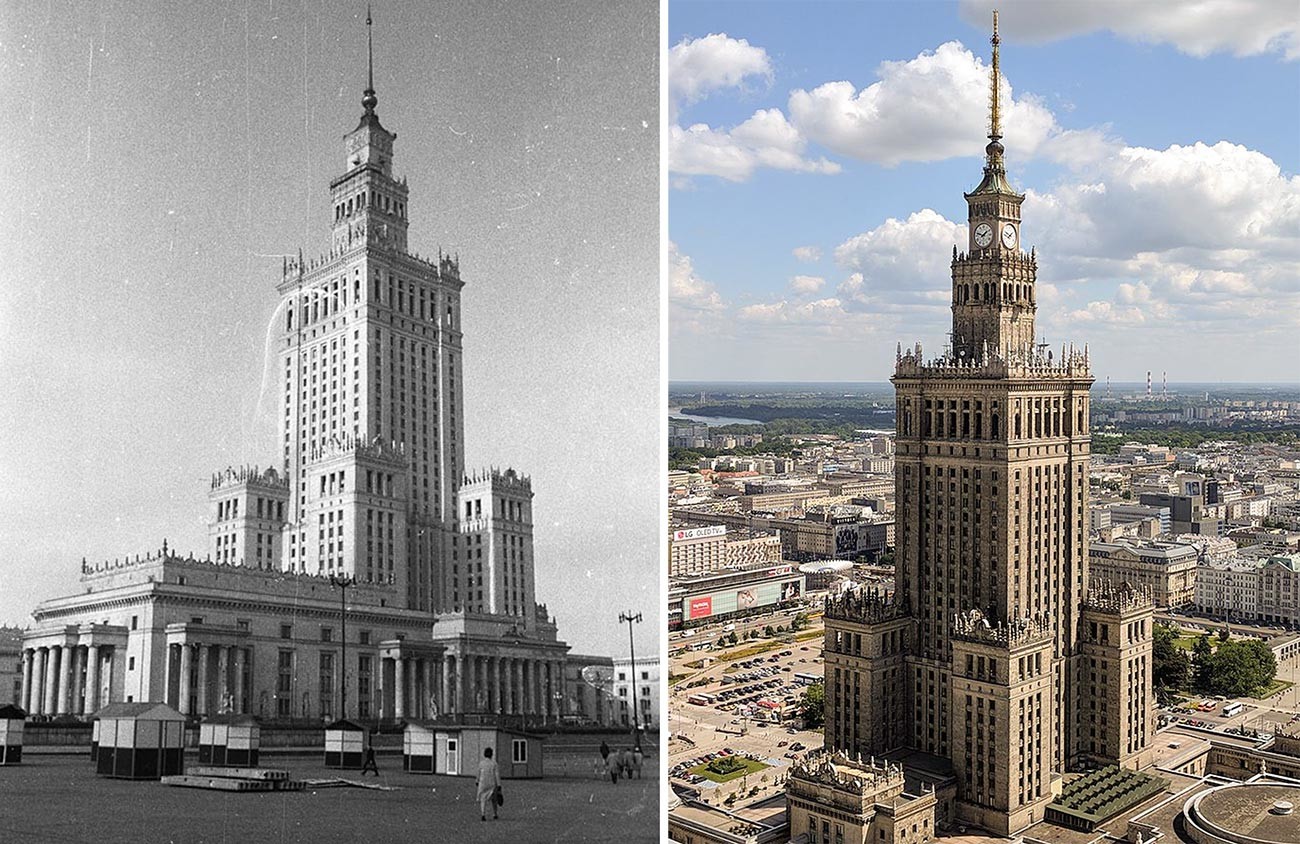 Palace of Culture and Science Warsaw.

This 187-meter-tall building (or 270 meters if you count the spire) was built according to Soviet design in the center of Warsaw as a “gift from the Soviet people.” More than 3,000 workers were involved in the construction of the Palace of Culture and Science, which lasted from 1952 to 1955. Initially the architect Lev Rudnev (who had previously designed the main building of Moscow State University) had planned a much more modest building that would be just 120 meters high. However, Soviet leadership in the end opted to create something on a much grander scale. Throughout the construction process, the media at the time devoted a great deal of attention and coverage to its progress.

Today, the 42-storey building houses an observation deck, exhibition halls, office spaces, four theaters, four museums, the Polish Academy of Sciences, cinemas and even a swimming pool. And it still remains the tallest building in Poland. 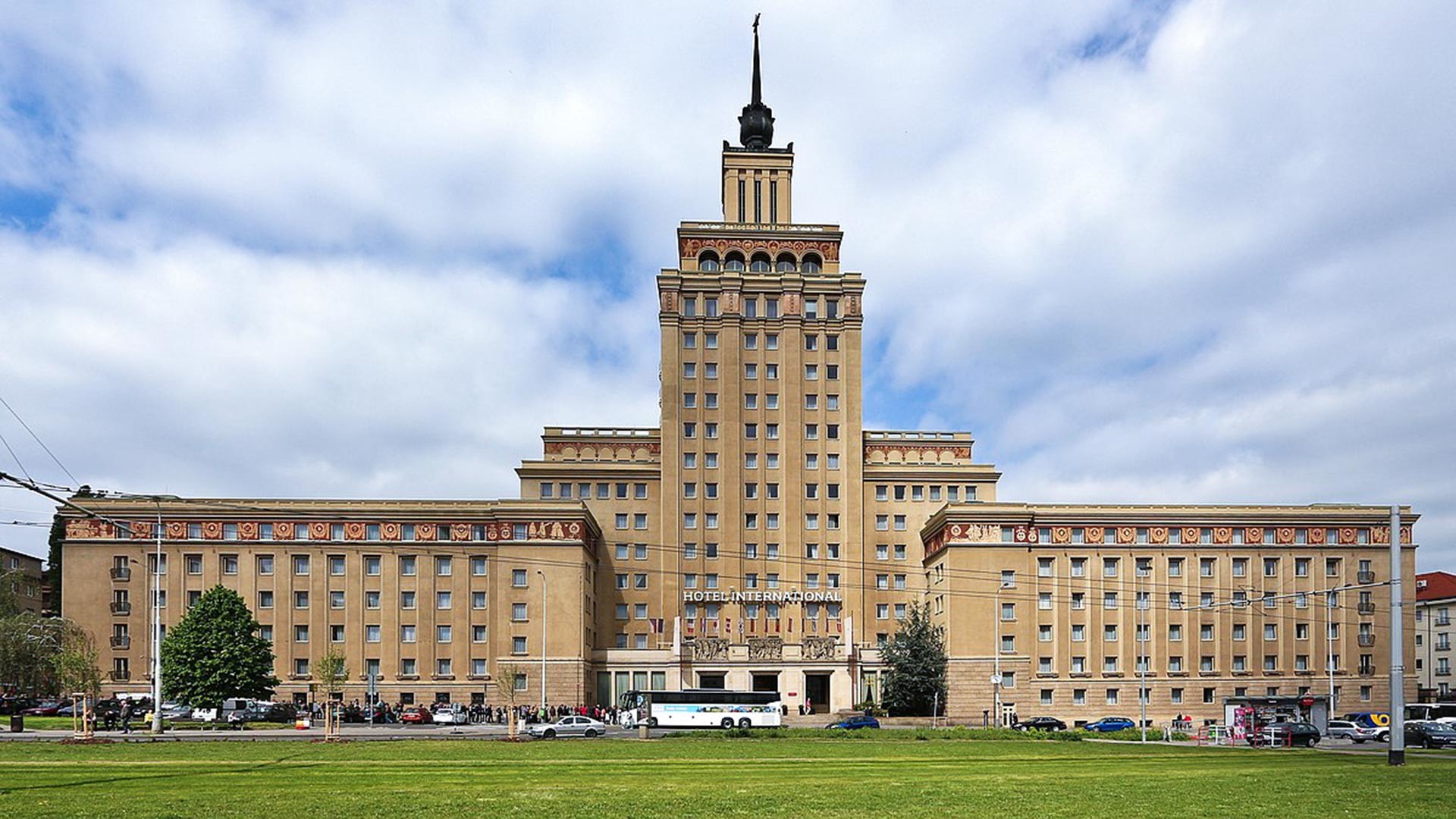 These days, you probably wouldn't think of a 16-storey building as a skyscraper, but in the mid-1950s it very much stood out against the low-rise background of old Prague, and even today it is one of the tallest buildings in the city. Originally, it was supposed to accommodate apartments for the military and some government facilities, but it was later decided to use it as a hotel instead. Inside, the lobby is decorated with mosaics with Czech folk motifs and views of Prague. 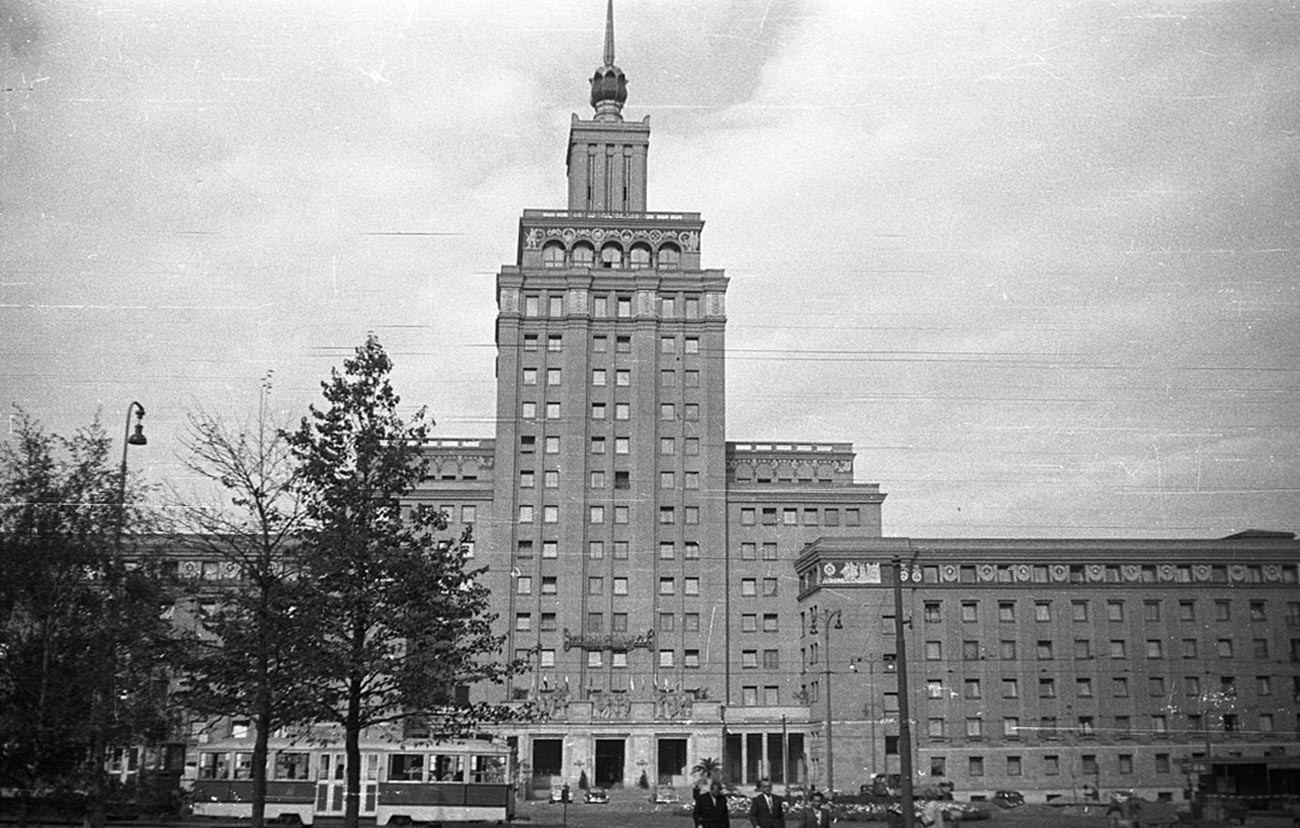 Incidentally, the building still has a fallout shelter that can accommodate up to 600 people, although hotel staff currently use it as a clothing warehouse. 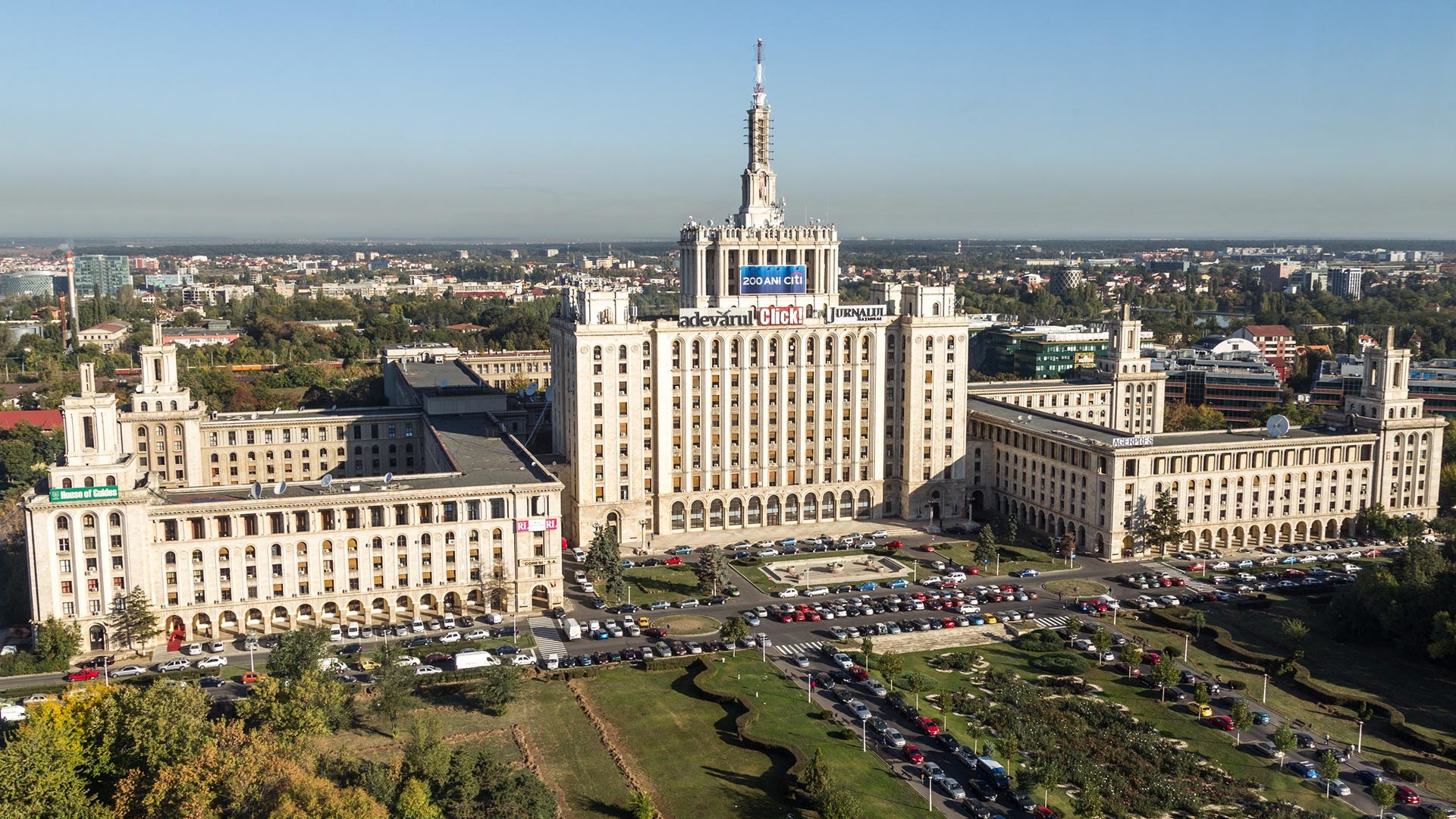 This 1950s skyscraper housed the editorial office of the Skynteya newspaper, the official media outlet of the Romanian Communist Party. From 1960 to 1990, a huge statue of Lenin graced the square in front. At 92 meters, not counting a 12-meter antenna, it was the tallest building in Romania until 2007. It was even featured on the 100 lei bill, Romania's largest denomination banknote at the time. 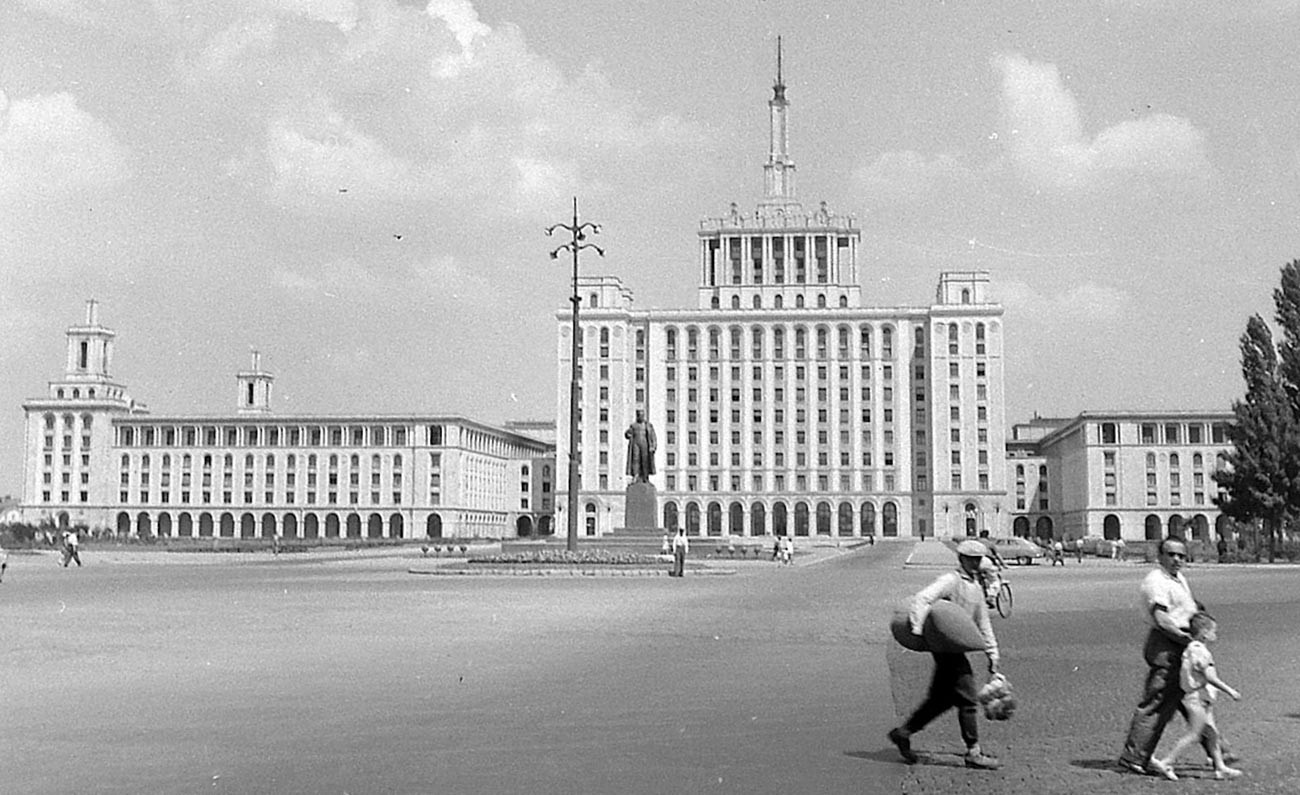 These days, the building houses the editorial offices of various local publications, while the Lenin statue has been replaced with a monument depicting wings and commemorating the anti-communist movement.

The Latvian Academy of Sciences, Riga 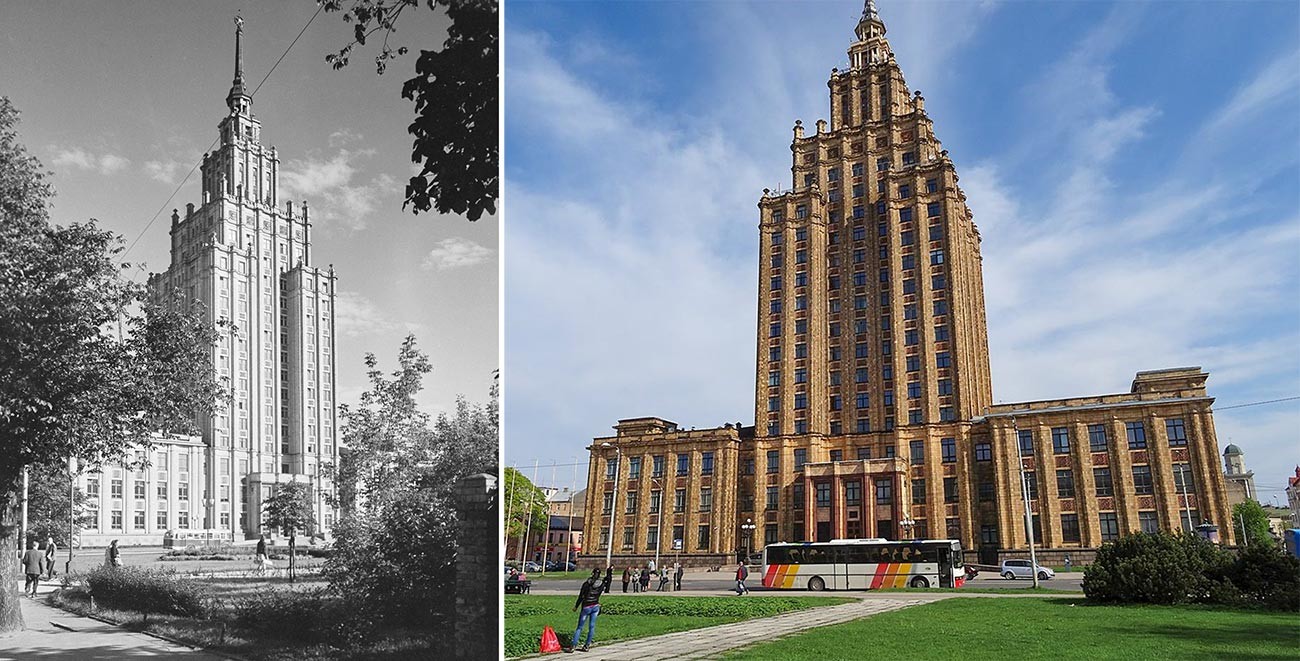 Latvian Academy Of Sciences, 1962 and now.

This building for scientists was designed by Latvian architects in the style of the Moscow skyscrapers. It still houses various institutes of the Latvian Academy of Sciences and centers for the study of the Latvian language and culture. There is also an observation deck at a height of 65 meters.

The interiors of the building underwent a radical change in 1991. After the collapse of the USSR, all the “ideological” bas-reliefs featuring Lenin and Stalin were removed, along with the star on top of the spire. 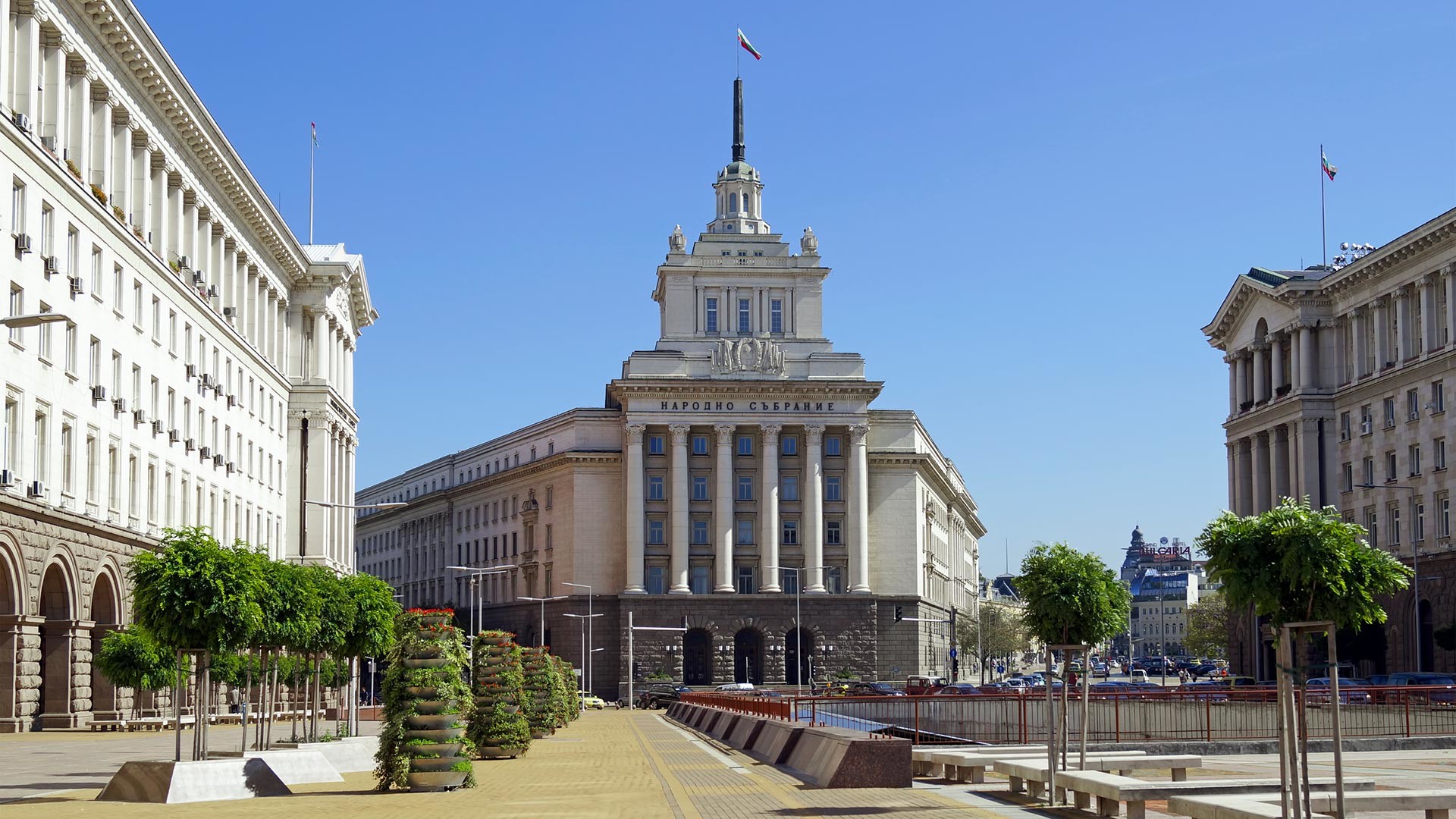 These three Stalinist Empire-style buildings were built in the center of the Bulgarian capital in the mid-1950s and were intended to house different government agencies. The building in the middle is the former Party House, where the Bulgarian Communist Party used to be based (now it is home to the People's Assembly of Bulgaria). One of the buildings next to it houses the Council of Ministers and a department store, and the other contains the residence of the President, the Ministry of Education and the Balkans hotel. 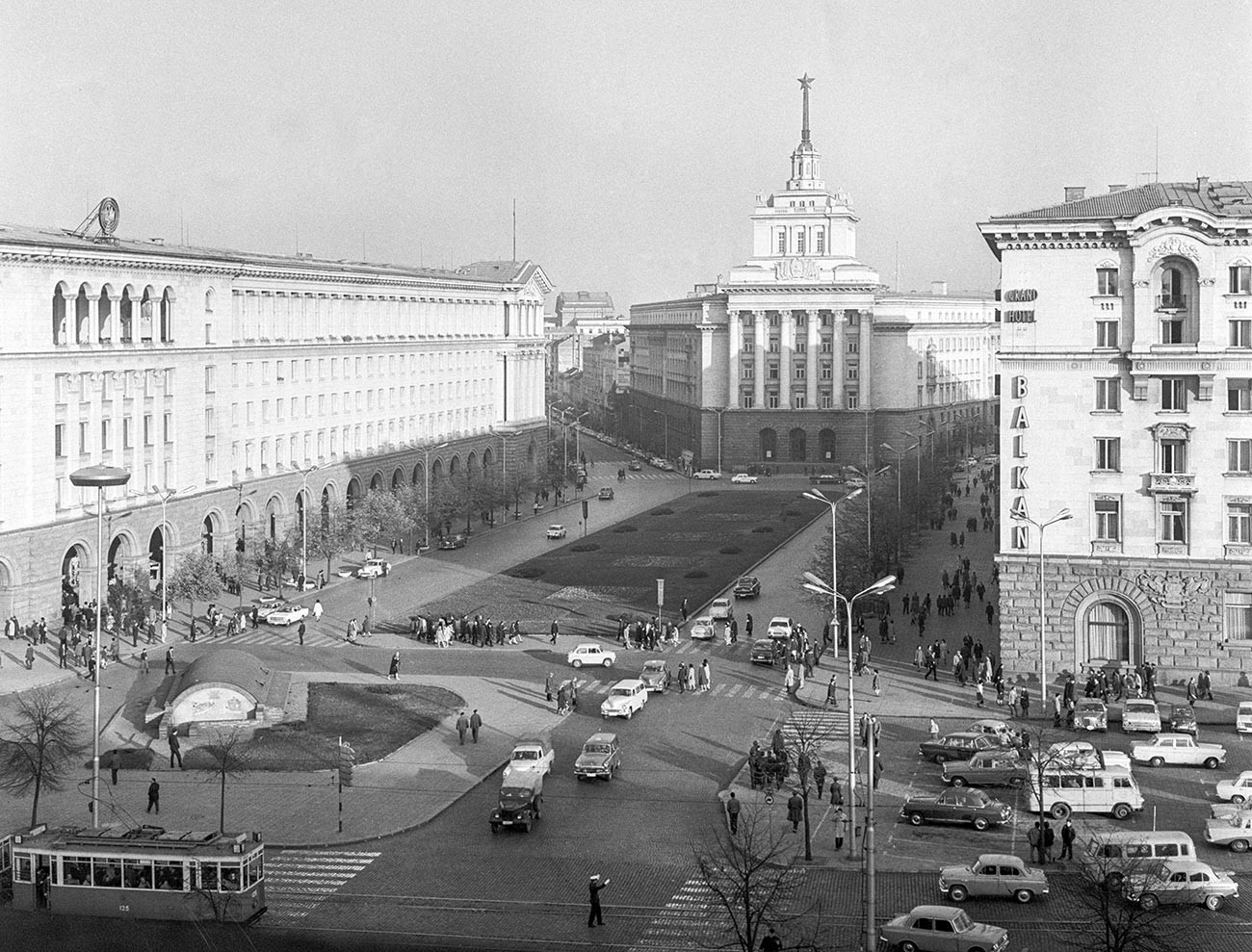 In 2000, a monument to Vladimir Lenin that formed part of this ensemble was dismantled and replaced with a statue of St. Sophia. Instead of a star, the steeple now has a flagpole with the national flag flying on it.

The House with a Spire, Kharkov 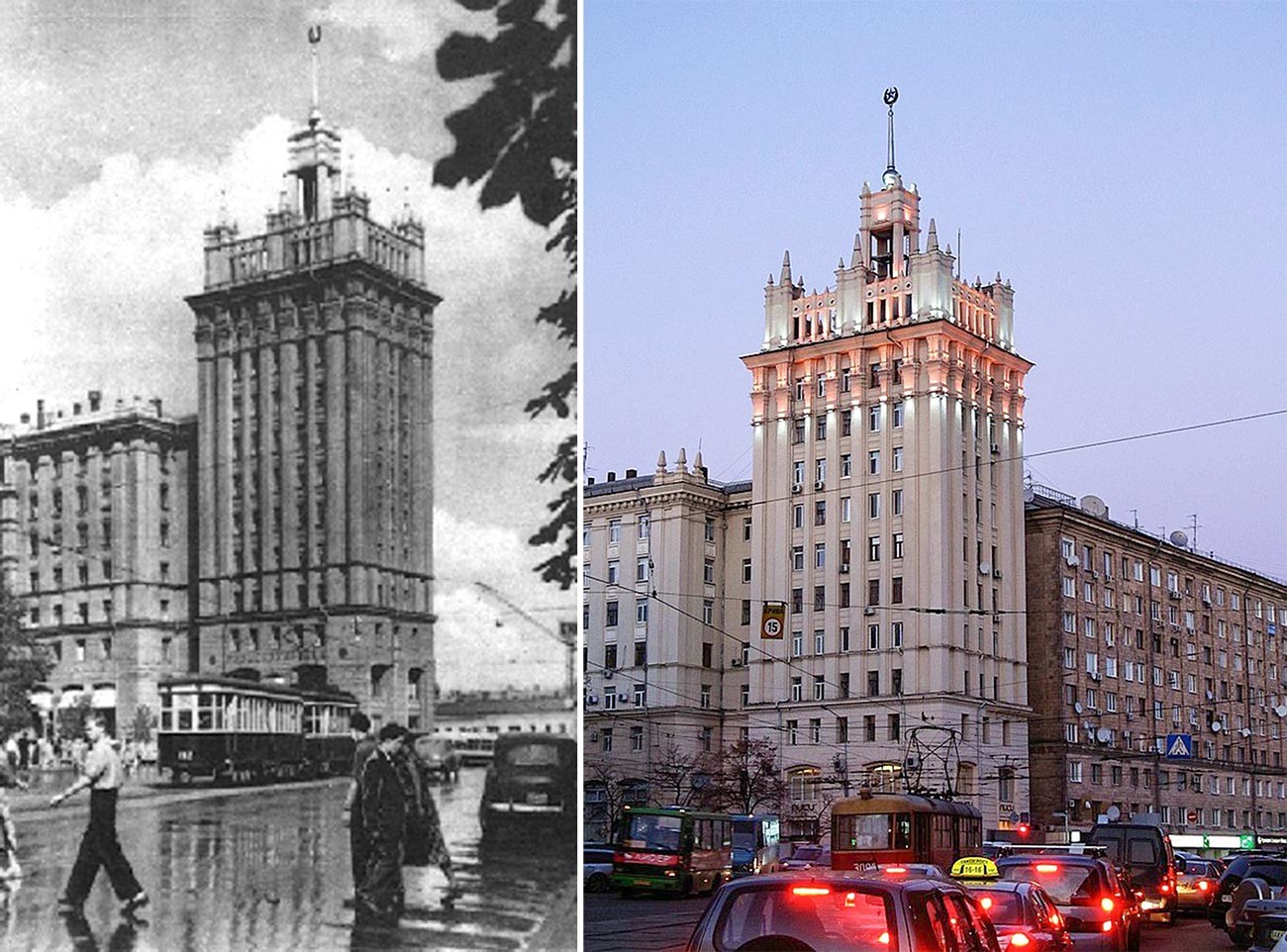 This residential building in the center of the Ukrainian city of Kharkov has become a popular tourist attraction. Central Kharkov was badly damaged during World War II, and in the 1950s this block of flats was built on the site of destroyed buildings for the employees of a local turbine plant. Interestingly, one wing of the building stands out as very different and more humble than the rest. This is because it was only completed in the 1960s, already under Khrushchev, who was not a fan of architectural excesses. 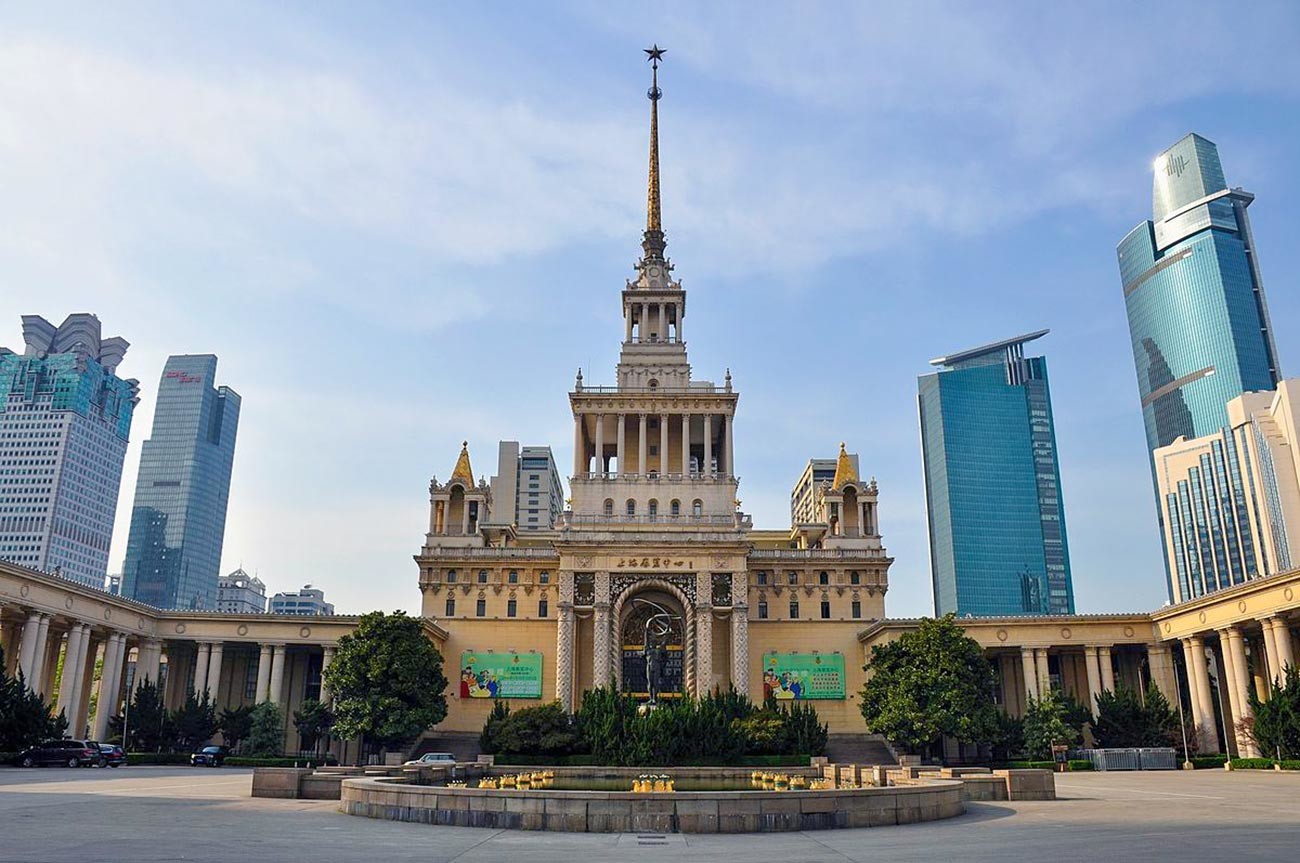 In 1955, a House of Soviet-Chinese Friendship was opened in Shanghai. It was built by Soviet specialists, while Chinese architects created the interior design. 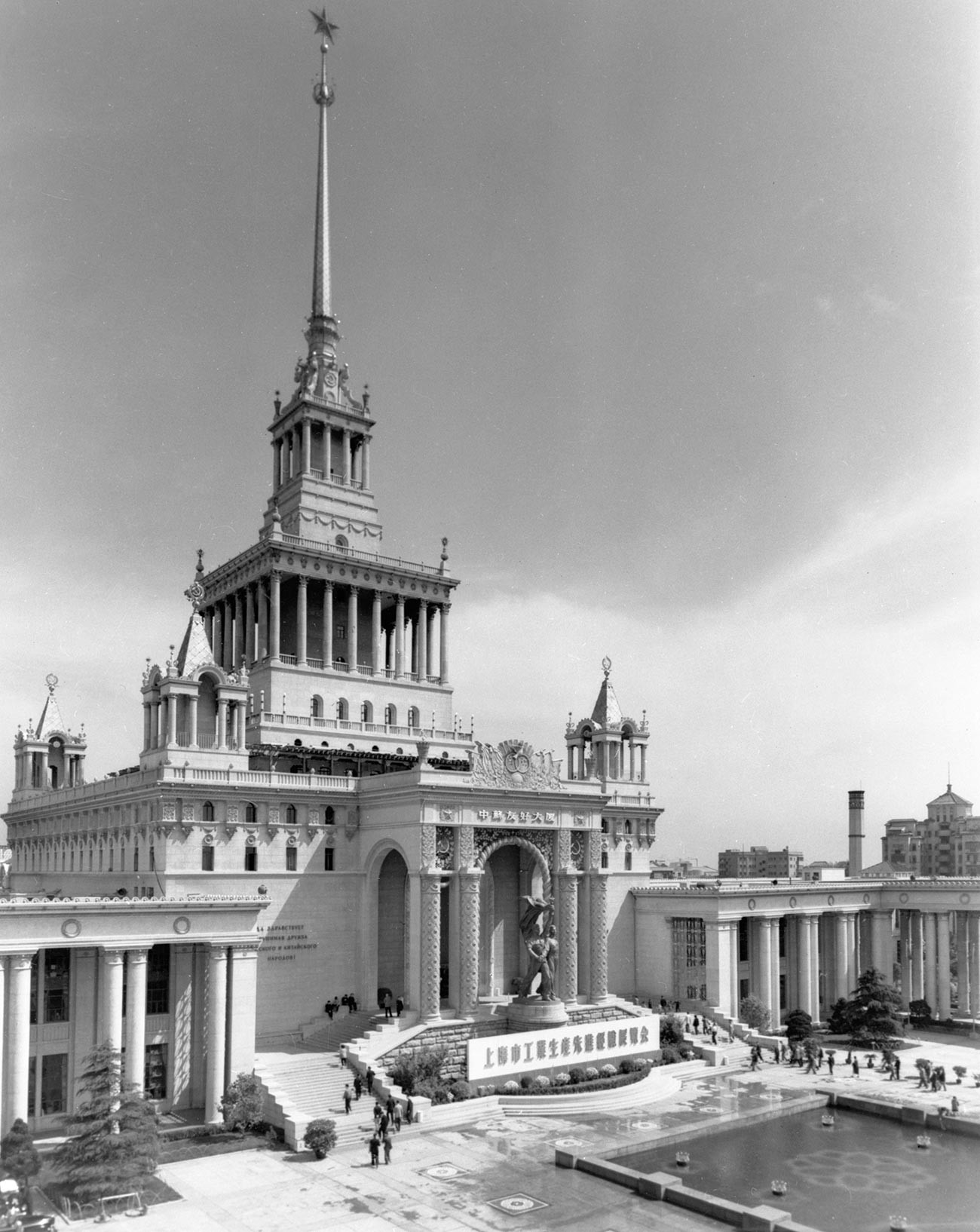 The Sino-Soviet Friendship Mansion in 1956.

From the outside, the building resembles the main pavilion of VDNKh, which is not surprising since the author of the project was Viktor Andreev, the same architect who designed the famous exhibition complex in Moscow. Nowadays, this building in Shanghai is used as a venue for different business exhibitions.