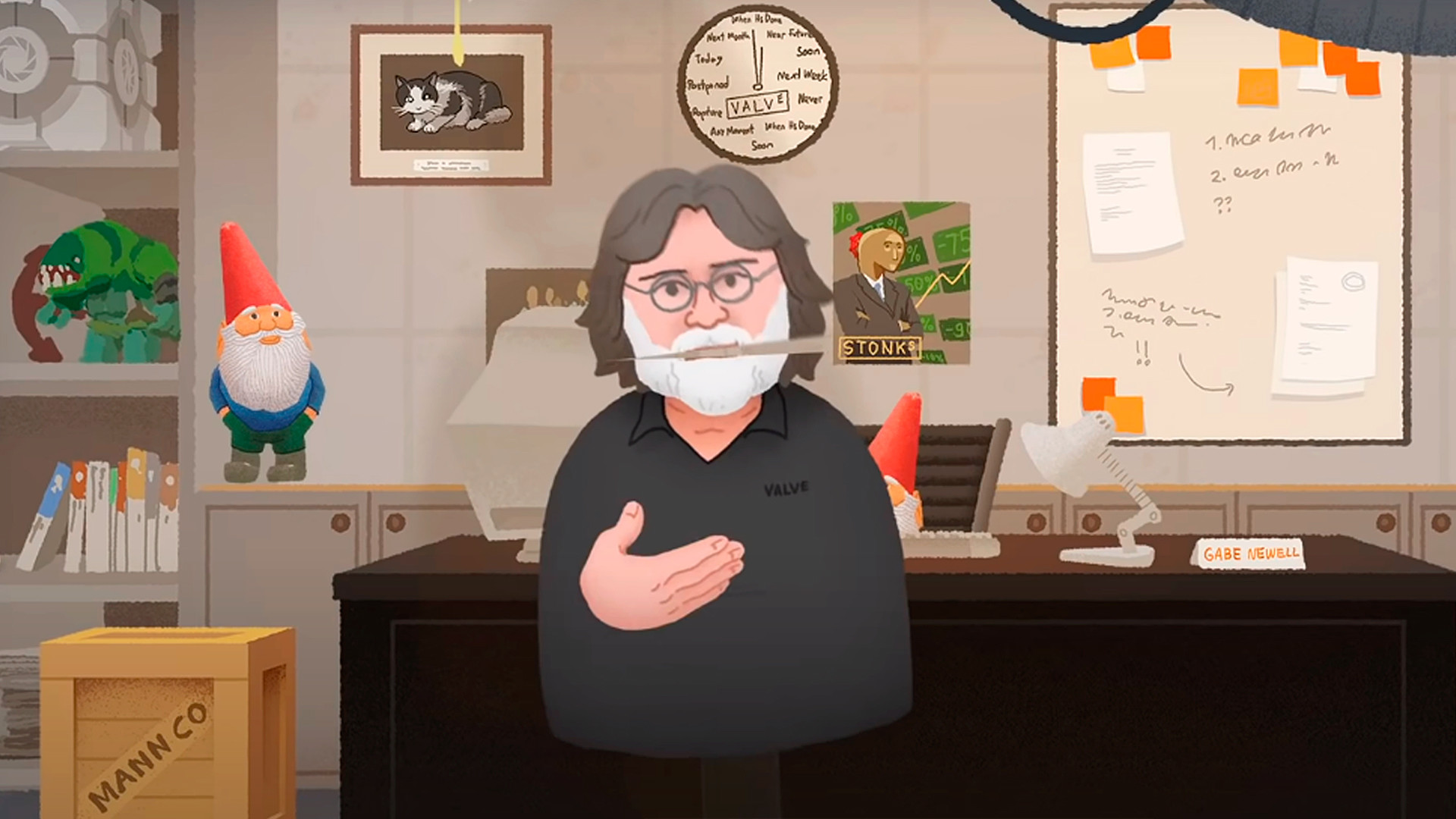 The Chalkeaters/youtube
Three musicians from St. Petersburg write songs for hardcore gamers, and the introduction to one was performed by none other than Valve and Steam founder Gabe Newell.

“Is this what you-ve been waiting for? Say one, two... and four?” semi-raps a middle-aged man with a white beard and blue shirt. This is how Gabe Newell begins a song about himself by The Chalkeaters, a band from St. Petersburg.

In the actual video, vlogger Stipendium voices the cartoon Gabe. He talks about Steam sales and the lack of a third installment in the series, Left 4 Dead, Half-Life and Portal. In just two weeks, the video chalked up 3 million views. According to the leader of The Chalkeaters, Alexander Serebro, aka Alios, Gabe himself congratulated them on the release of the song.

“It was the most challenging and ambitious project. We aimed for a high level of detail in the video: there are lots of hand-drawn characters and backgrounds, plus 3D graphics, which we’d never used before. Ours is a small team, so the three-minute video took more than six months to make. The legal formalities over the use of the character also took a while,” says Alexander.

The Chalkeaters formed in 2019. The original and still current lineup is: Alios, who writes the songs; Ergia, who does the arrangements and guitars; and Masela, the sound engineer. The trio had performed songs about anime and games since 2012 as part of the St. Petersburg rock group BroniKoni, but decided to create their own game-themed project.

“Games have always been a pretty big part of my life. As a child, I had a Sega Megadrive console. The Sonic the Hedgehog and Shining Force series were my first big gaming passion. When I got my first computer at home, I played everything I could lay my hands on — The Elder Scrolls, Call of Duty, Need for Speed,​​” Alexander recalls.

First of all, The Chalkeaters made a track about Bowsette, a fan-made female version of Bowser, the main antagonist from the Mario series. That’s when the band also put together a video team: motion designer Lenich, artists Pondis and Ilya Tetin, and animator Yumi.

“The song was inspired by lines from a fan comic: ‘Your princess is in another castle, but I’m still here.’ I thought we weave a funny story from it in which Bowser is actually trying to win Mario’s heart by constantly kidnapping Princess Peach,” explains the leader of the group.

The band’s most popular track is “DOOM CROSSING” — with 30 million views on YouTube. On March 20, 2020, two games were released at once: the ultra-violent shooter, Doom Eternal, and the super-cute Animal Crossing: New Horizons. This resulted in many online memes about how the main characters, Isabelle and Doom Slayer, would make a great couple. The guys from St. Petersburg also wrote a song about it.

“It was fun to make a song about the contrasting themes of the two games, and to write lyrics about the friendship of such different characters who complement each other so well. We ended up doing the animation and the song at the same time, and the whole process took about six weeks — a record for our team. To our great surprise, the track became super-popular and helped the project find its feet,” recalls Alexander.

In the spring of 2020, in connection with the coronavirus outbreak, The Chalkeaters released a video about an avid gamer in quarantine. The cartoon hero is in seventh heaven, because now he can play The Witcher and other games non-stop.

As Alexander explains, the last track (with Gabe Newell) was initially intended to mock the failure of various projects, the lack of new cool single-player games and Steam’s high fees for developers.

“But the release of Half-Life: Alyx threw a monkey wrench in the works. All of a sudden, Valve was back in the spotlight with an amazing single-player game. So the song had to be reworked to reflect this. There’s still a bit of teasing in the first verse, but the protagonist is now Gabe himself, who changes during the song, realizes his mistakes and commits to turning the rusty Valve around and moving into the future,” explains Alexander.

To date, The Chalkeaters have been making money from monetizing YouTube videos, streaming on Spotify, YouTube Music, Apple Music, Deezer and Amazon Music, and selling exclusive content through Patreon.

Going forward, the group plans to team up with game developers to record a track “for a promising game,” the name of which remains a secret.