7 unbelievable places for weddings in Russia 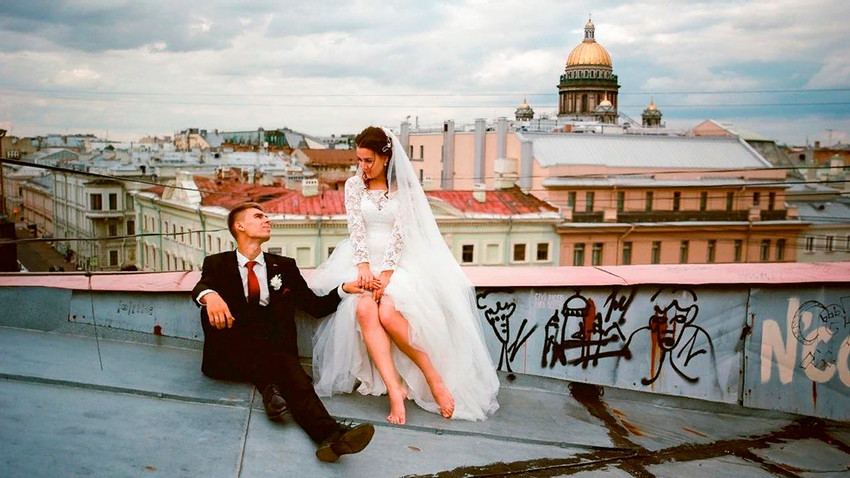 @dimas.kazakov
In Russia, couples can get married not only in civil registry offices, but also with so-called “on-site marriage registration.” Most couples choose old noble estates, but it turns out there are also a lot of very unusual spots for weddings.

1. At a football stadium 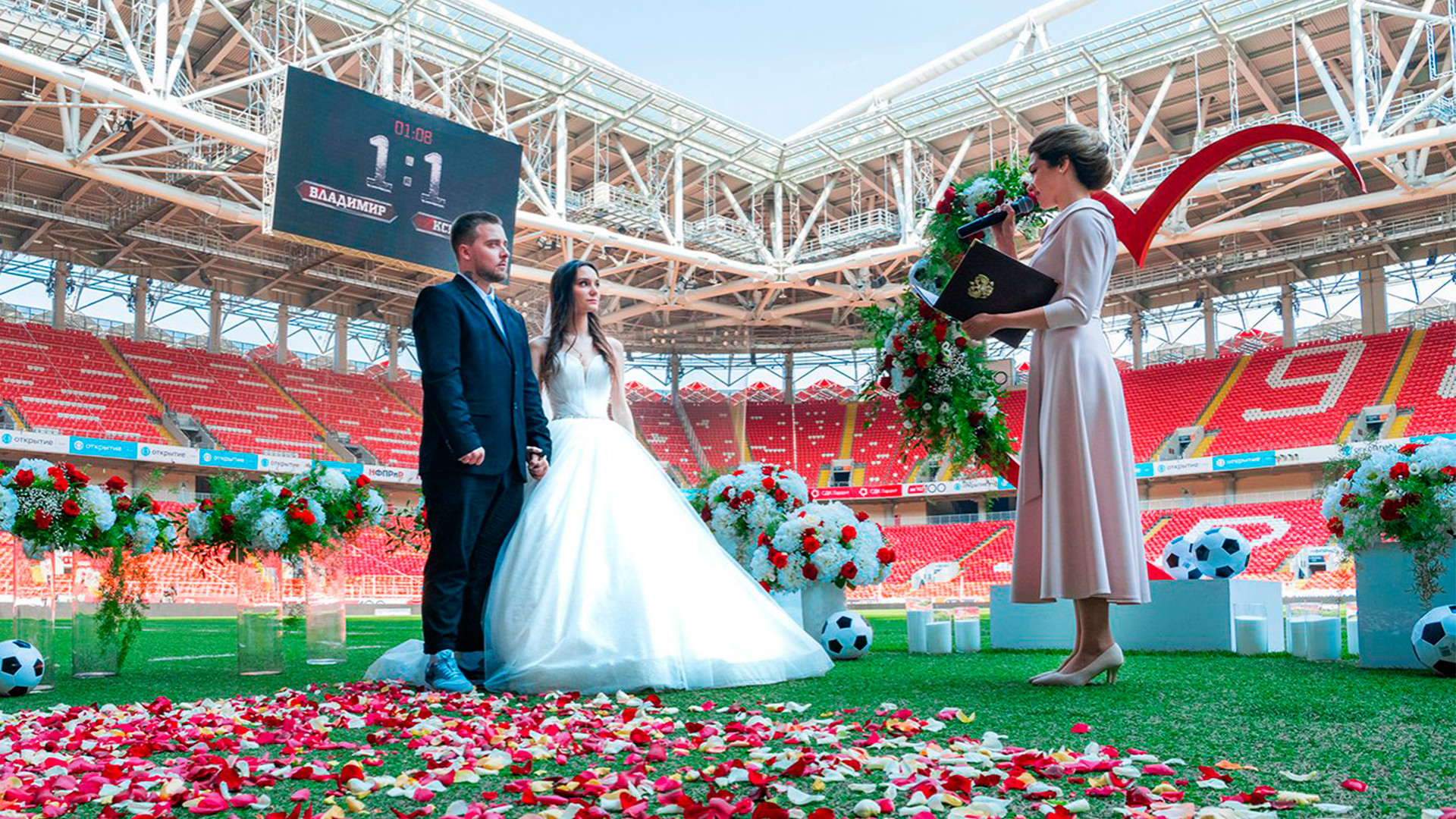 Just imagine: A bride and a groom stand on a huge football field, but instead of fans the stadium is full of their friends and relatives. Many stadiums of popular football teams (in Moscow, for example, “Luzhniki,” “Spartak” and “Russian Railways Arena”) sometimes rent out their stadiums for wedding ceremonies. Moreover, they can organize a festive banquet, a football-themed photo shoot and arrange entertainment for guests. Of course, this kind of event is only possible on days when a football match is not being held.

"I’ve been a fan of FC Spartak since I was a child, and such a chance to get married at the stadium doesn't come around for everyone, we shouldn't miss it," says Victor Lobanov from Moscow. 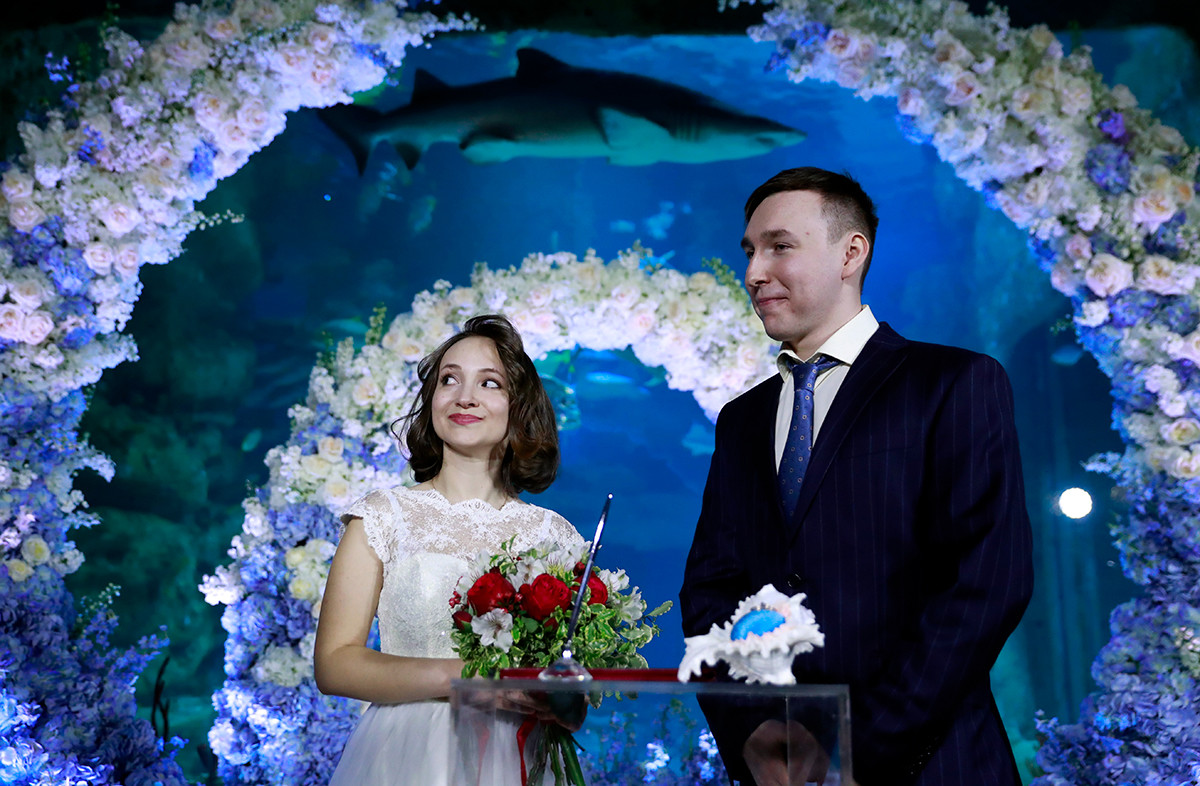 Lovers of the underwater world can register their relationship in the Moscow aquarium, which is one of the largest in Europe with more than 12,000 species of marine animals. The ceremony takes place against the backdrop of an enormous aquarium with orcas. 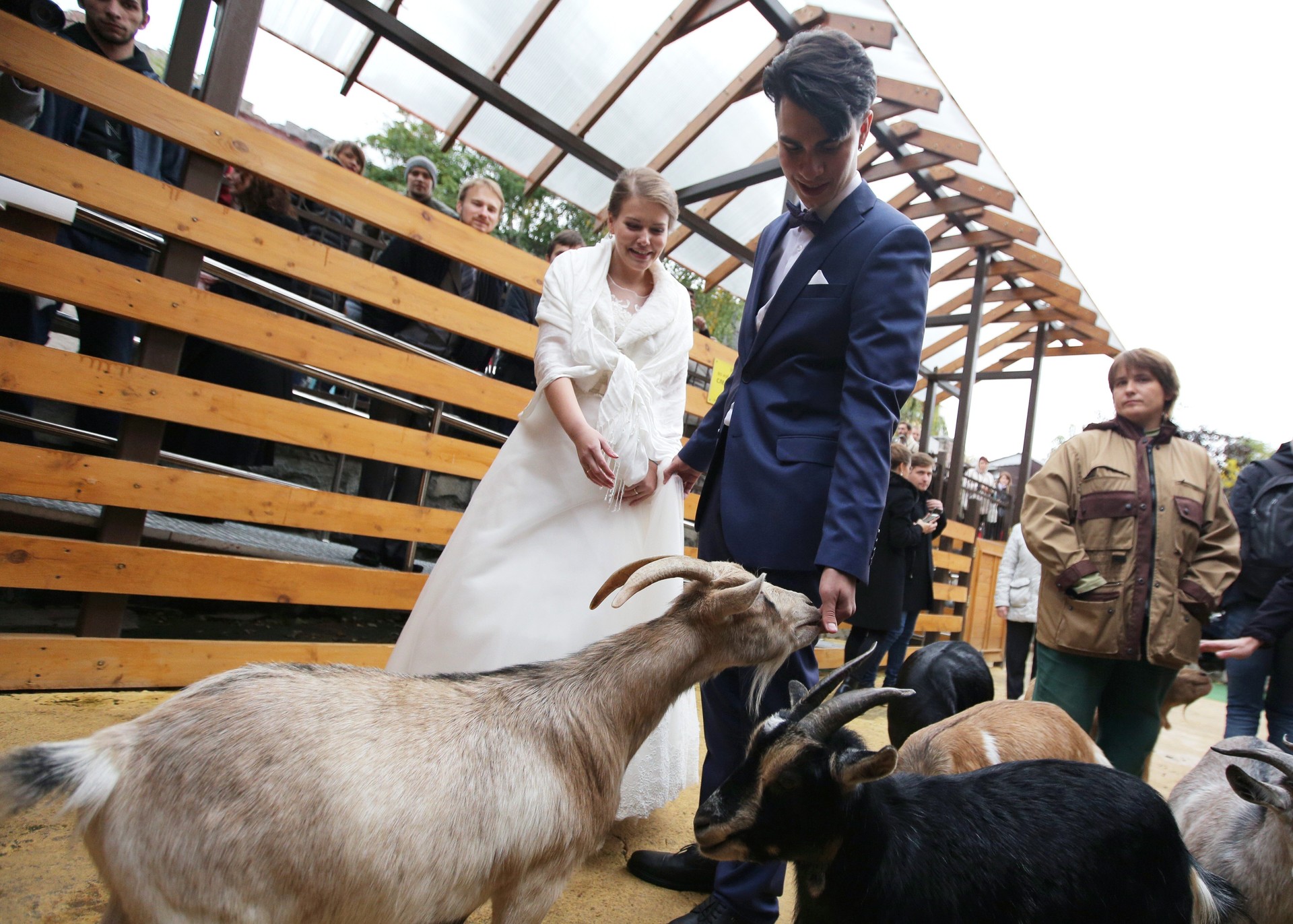 To stroll around a zoo wearing a chic white dress in the company of animals is a rather unusual choice for a wedding day. To create an even more immersive atmosphere, the Mendelssohn March can be supplemented with the croaking of frogs, the hissing of lizards and other wildlife sounds.

"We thought it was original, and we decided to apply for registration at the same time when it started here at the zoo," said Maria and Anton, who were the first couple to get married in the Moscow zoo in 2017.

4. On a commuter train 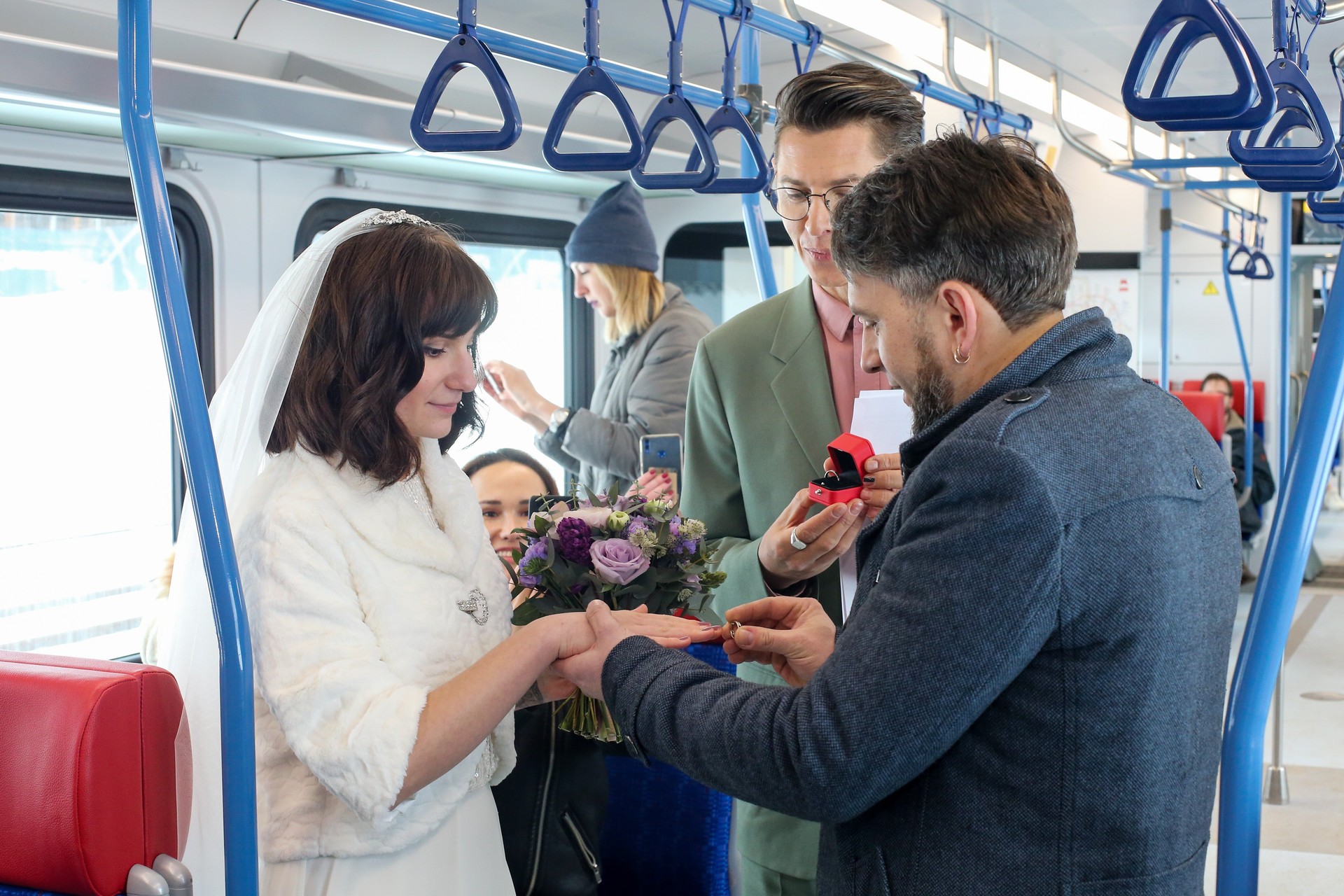 One couple decided to register their marriage on a train because they work on the railways. He is a train driver, and she is an assistant driver. Railway management presented them with this unusual gift for their wedding day, which took place on Feb. 14, 2020. The wedding guests were actually passengers riding on the same train at that time. 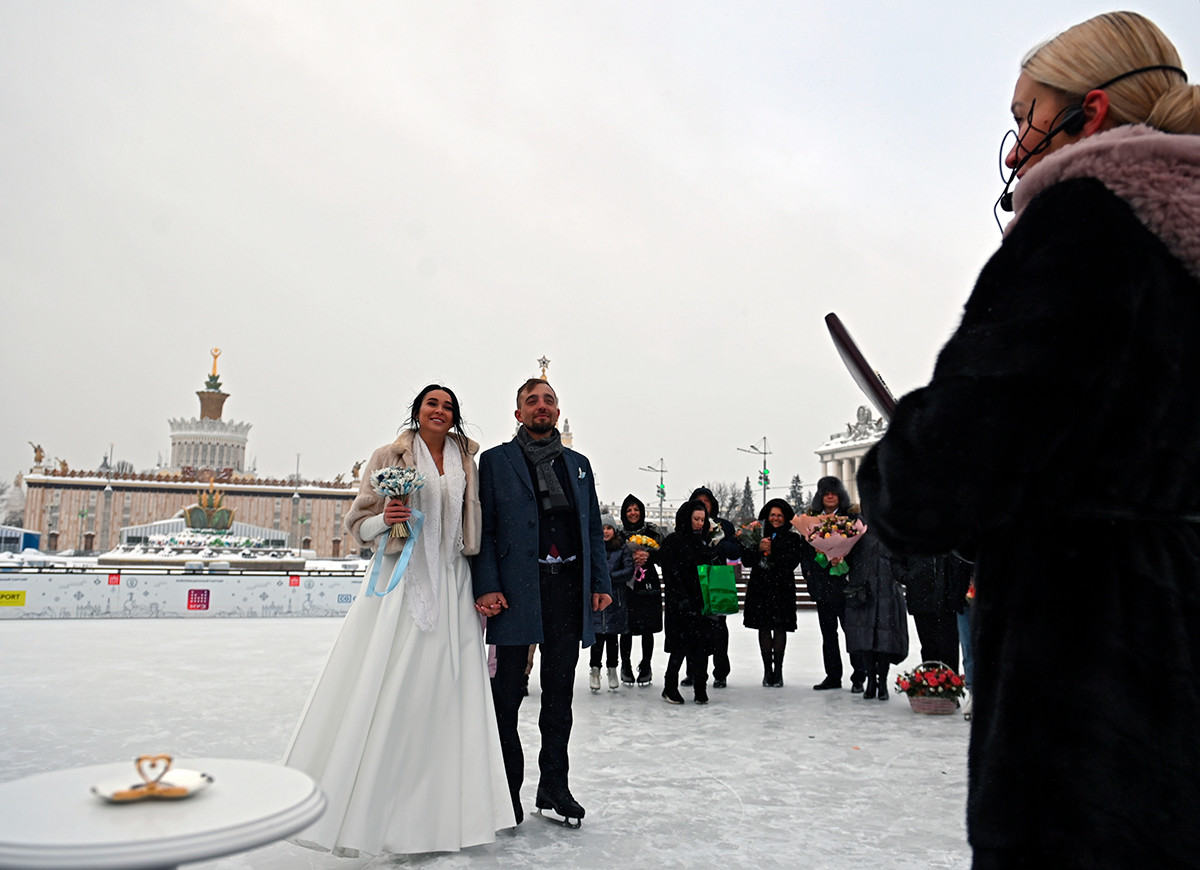 In winter, a couple can choose a skating rink for a wedding ceremony! If guests get cold, they can easily warm up by skating to the nearest coffee kiosk or playing hockey with the newlyweds. Ilya and Anastasia planned to hold their wedding in the usual registry office at VDNKh, but a few days before the ceremony they were asked if they would like to hold the official ceremony on the ice rink, and they agreed. "A skating wedding is so unusual," the newlyweds said. "We told our relatives that we don't insist that they wear skates, they could just watch." 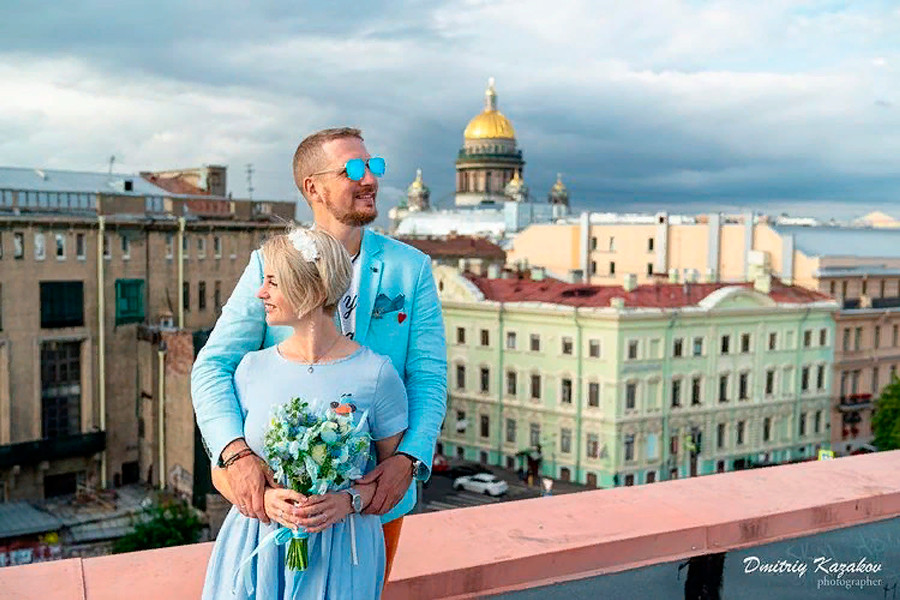 Such wedding ceremonies are often held in St. Petersburg, which offers stunning views from the roofs above. Climbing up onto roofs has long been a popular pastime in the city, but now it has become safe and easier with many specially organized sites that offer excellent views of the entire city. The main thing is not to look down!

What could be more romantic than strolling beneath the starry sky? Only a wedding ceremony under the stars! On their wedding day, newlyweds at the Moscow planetarium can see the Northern Lights, star rain and a parade of planets. And they will be able to tell everyone without exaggeration that their union was made in heaven!