Polar bear cub rescued by gold miners in the Arctic 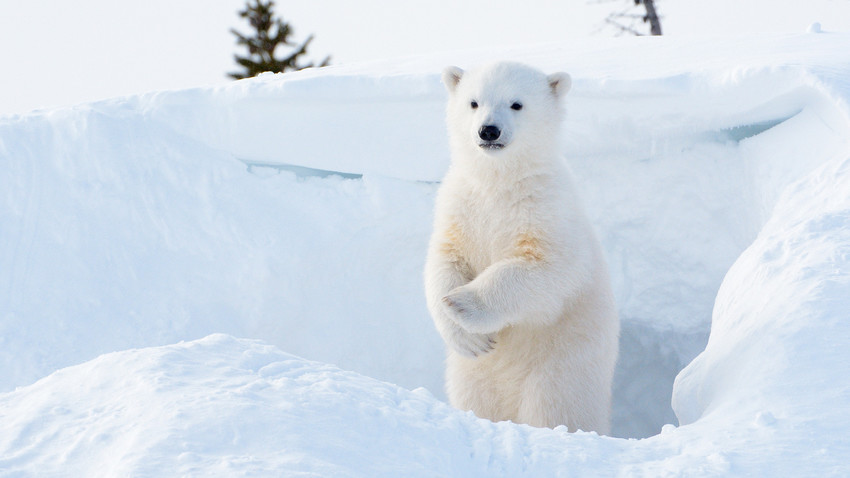 AndreAnita/Getty Images
The orphaned cub will now reside in the Moscow Zoo.

Russian gold miners working a shift on the island of Bolshevik, part of the Severnaya Zemlya archipelago in the high Arctic, tamed a polar bear cub “like a dog” who lost its mother and came to humans for food.

A video shot by the workers shows how a totally tamed female cub climbs a ladder to the sound of human encouraging voices, then it comes to play with one worker while the other calls for it to come and take a selfie with him.

After the cub lost its mother, it came to the humans attracted by the smell of food.

“For right or wrong, but they fed the endangered animal and through that tamed it”, Andrey Gorban, 56, director of the Royev Ruchei Zoo in Krasnoyarsk who, among others, played a part in saving the cub, was quoted as saying.

Although a tragedy was temporarily averted, a new danger appeared when it was time for the shift workers, who fed the cub, to leave their station and return to the mainland.

“The shift workers were leaving, the bear cub may have died of starvation [because] it was very small. We didn’t have time to do anything [about it]. The only hope was that the [nearby] dump was big and the cub may have lasted for two months [before the next shift came in],” Gorban posted on his Facebook page.

When the new workers arrived, they saw no cub and had to assume the worst. However, news came from a different station that the cub had appeared there, “Skinny, dirty, but alive!”

This time, people had to reach a lasting decision on what to do with the tamed cub who would soon grow up and transform into a two-hundred-kilogram heavy predator which, nonetheless, would no longer be able to survive without humans.

Since polar bears are in Russia’s red book as endangered species, the decision had to be coordinated with wildlife authorities in Moscow. As a result, the cub was caught and transferred to the Moscow Zoo, where it would undergo a quarantine period of several months.

As tamed polar bears cannot be reintroduced back into wildlife, the cub will most likely be transferred to one of the zoos in Russia.

“Thank you to everyone who helped, who did help with deeds and not with words. The most important thing is that the bear cub is saved and will find its new home,” said Gorban.

Click here to read about a Russian family who tamed a bear.