What is slyakot and how do Russians cope with it? 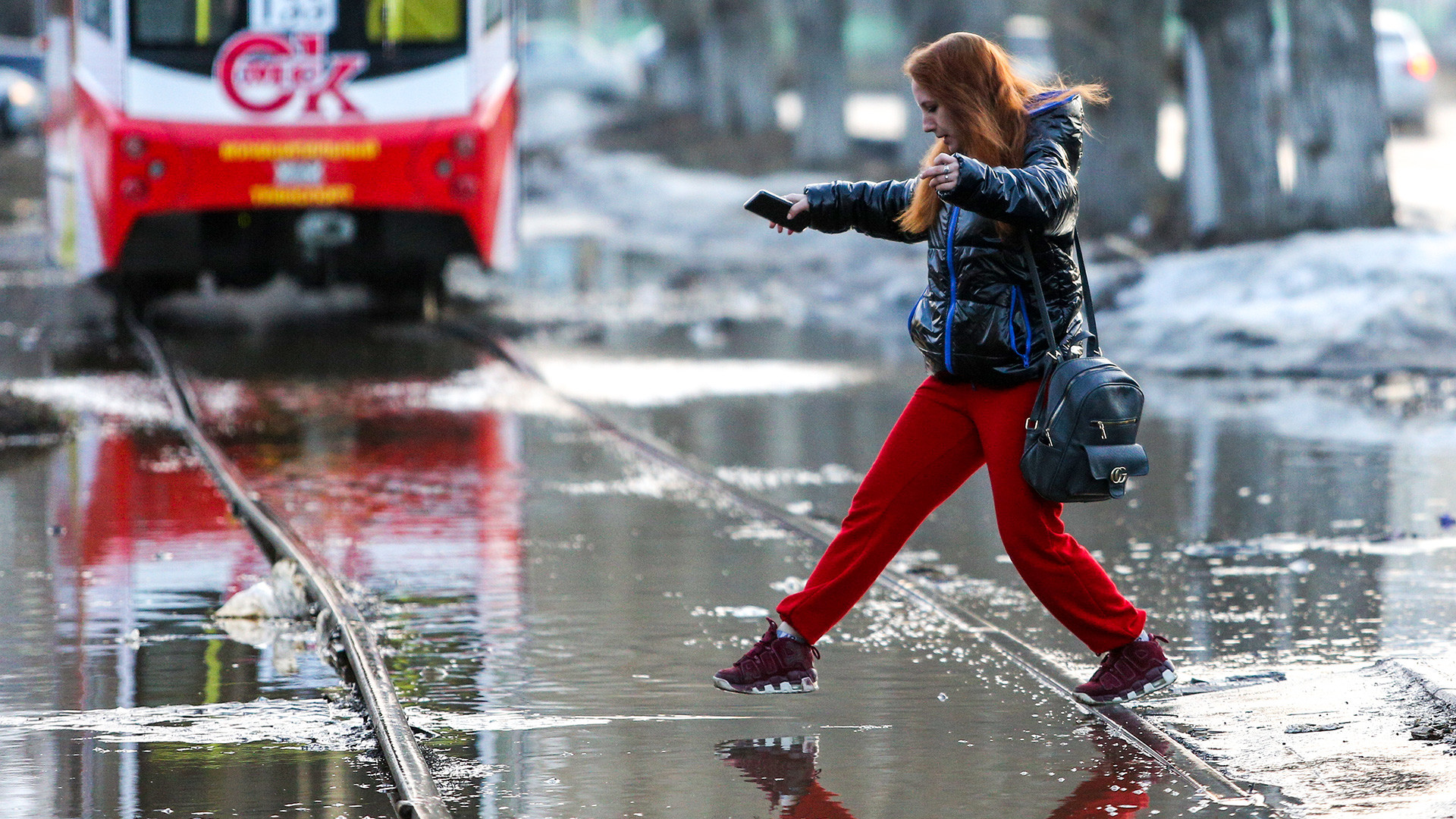 Omsk,Russia - April 7, 2021: A woman oversteps water in a flooded street. The flooding is caused by snowmelt

Yevgeny Sofiychuk/TASS
Imagine there are three roads – one with brown slushy snow, another with a huge puddle and a third with dirty snow in a huge puddle. Which one would you take? Residents of most Russian cities face this choice every spring.

On a spring day in 2020, Maria (the name has been changed per request), a medical college student from the small town of Kamensk-Uralsky (in Sverdlovsk Region, 1,500 km from Moscow), together with a friend, was standing at the entrance to an underground passage, filled knee-high with dirty water smelling of feces. Instead of a “lifebuoy”, there were just a few wooden planks floating in the middle of the underpass. But it was the only way to get to the other side of the rail tracks, so it had to be crossed. Maria would have gladly climbed over the tracks, as was her habit, but just the previous day she had been caught by a police officer while doing exactly that and issued a fine of 100 rubles (approx. $1.30).

There was a little less water on the sides, next to the walls, so the two young women decided to walk along the edge, clinging to the walls.

“I took just a few steps, but my feet were immediately wet, I slipped and hit my head on an electric cabinet that was right in front of me. There was blood coming from the wound, at first I was scared, but there was no concussion - just an open head injury,” Maria said.

Several days later, the water from the underpass was pumped out. Exactly a year on, the underpass was filled with water again and local residents again had to get to the other side, either by walking on “wooden planks” or by crossing the railroad tracks.

When spring comes, water resulting from melting snow with soil and small debris mixed in it fills sidewalks and destroys roads in almost every city in Russia. Even in Moscow, when you get out of a taxi or run out of the metro, there is a risk of stepping not on dry asphalt, but in a puddle or slush.

This phenomenon, sometimes fraught with injury and familiar to most Russians, is described by the word слякоть, which is rather tricky to translate into English, since the most common equivalent – slush – does not quite cover it, so it just became known as slyakot (transliteration of the Russian word). In foreign media, the word was first used in the Miriam Elder column in The Guardian in 2013. But slyakot has existed in Russia since ancient times and people have still not been able to come up with an effective way of tackling it. It’s also not clear if they ever will.

Tires and inflatable boats vs puddles

An inflatable boat is floating out of a flooded underpass in the small town of Ob in Novosibirsk Region. In it, there is a young guy dressed in a sailor’s vest, with a bucket on his head and a guitar in his hands. There are roses and lit candles in the boat. He starts playing a simple tune on his guitar and soon he is surrounded by young women in full skirts and masks, who begin to dance around him.

This video, titled ‘The Carnival of Venice in the city of Ob’ has garnered more than 50,000 views on YouTube since 2018. It was shot and edited by Denis Yeliseyev, a 19-year-old student and editor of the Ob online community on the Russian social network VKontakte, who dedicated the video to the city administration that, year after year, fails to tackle spring slyakot, which quickly turns into flooding.

“Every year, when it starts to get warm, the snow that has not been removed from the city streets begins to melt <...> What we have for storm drains here cannot cope with the large amount of water, the wells that are supposed to accumulate all the water are overflowing, there are huge puddles on the streets, the underpasses are flooded. <...> People have little choice but to run across the federal highway, though some decide to risk getting their feet wet ... There are also those who take off their shoes, roll up their pants and walk barefoot,” Yeliseyev says. 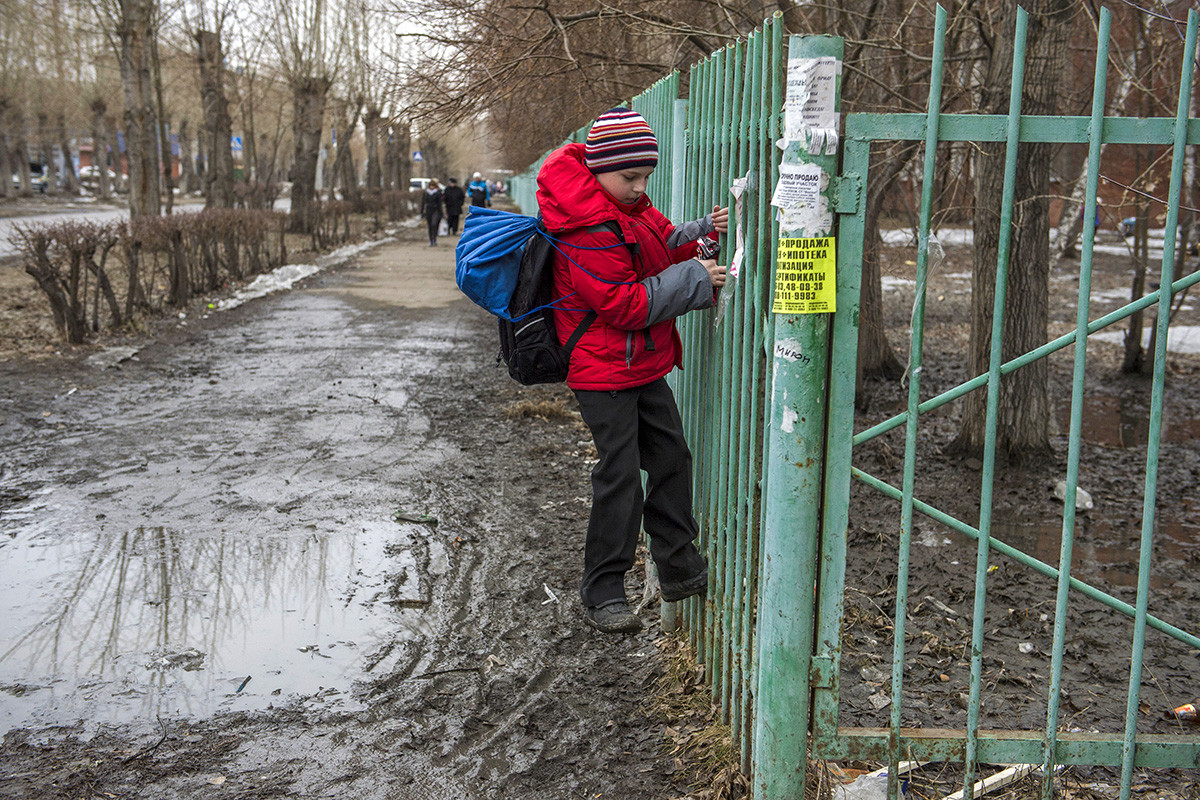 According to Yeliseyev, after the video was posted online, the city administration launched a free bus service to transport people from one side of the underground pedestrian crossing to the other, but the demand for it was low, as people were not prepared to spend a long time waiting for a bus.

Several years on, the problem has still not been resolved - in April 2021, users in Yeliseyev’s online group were still publishing photos of enormous puddles, only this time the puddles were near a pedestrian overpass. Judging by the photos, in order to reach the steps, city residents, including elderly ones, first have to jump onto a deflated tire at the foot of the overpass.

Some 650 km from Ob is another city that is all too familiar with slyakot - Omsk. According to a local resident, Lyudmila Makaryeva, every year, children have difficulty reaching school because of puddles.

“This is how the kids have invented a new amusement for themselves - crawling and walking on the pipes that are laid along the building. But they are so easy to fall off from. The city administration told us to contact the management company - but in the two weeks it took to establish who the flooded street belongs to, it had already dried up. It’s hard to believe that for two weeks we were walking almost knee-deep in ice water,” Makaryeva complains.

In late March 2021, in order to clear the city of snow, several districts of Novosibirsk had an emergency regime introduced because of slyakot and possible flooding. By mid-April 2021, some of the streets and highways in the city were still flooded, the local emergency department reported. 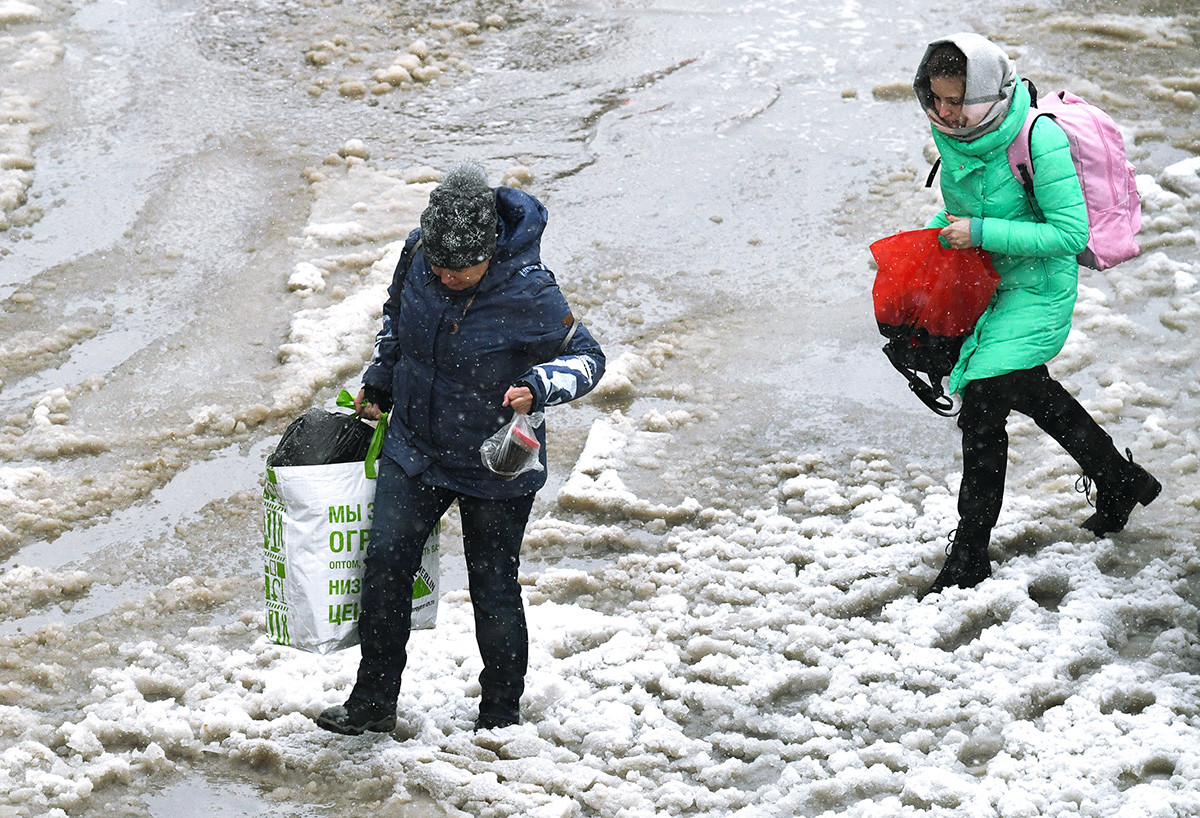 Passers-by on a street in Novosibirsk

According to local resident Dmitry Sakharov, the municipal services did not manage to remove the snow in time and, as a result, the snow melted right on the roadway, damaging the asphalt.

“There are no roads left, they have been simply washed away. I got into potholes several times because of this. Over the past two years, I had to change a set of wheels which was supposed to last 5-10 years. Potholes are simply filled with asphalt and tapped down with a shovel, this is what the emergency regime comes down to,” Sakharov says.

Unequal battle with the elements

According to the Association of Pipe Manufacturers, out of Russia’s 1,092 cities and towns, 960 experience flooding - including Moscow, St. Petersburg, Novosibirsk, Kazan and other large cities.

According to a study by the Institute of Industrial Ecology of the Ural Branch of the Russian Academy of Sciences, the main source of slush and mud in Russian cities are: 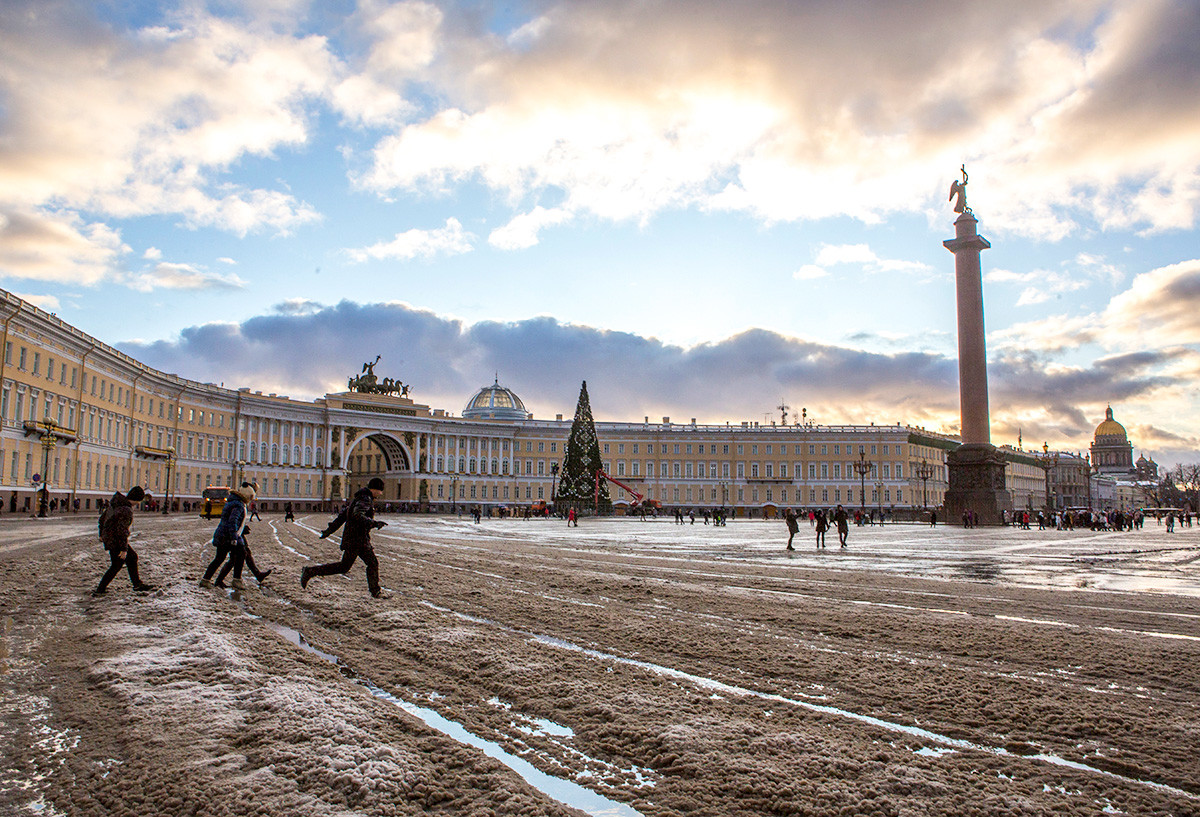 Different cities try to prevent flooding in the same way – the municipal services try to remove the snow that is about to start melting with shovels and special snow removal equipment. This is, for example, how things are done in Yaroslavl and St. Petersburg.

Since 2017, in addition to the consistent removal of snow, the Moscow city administration has been repairing and building new sections of storm drains. According to the Moscow mayor’s website, this has made it possible to reduce the number of places where slush tends to accumulate.

However, these measures are not enough, experts say. In their opinion, snow and dirt should be immediately removed from residential areas and yards should be designed in such a way so that soil does not come into contact with pedestrian zones and cars cannot drive onto unpaved areas. 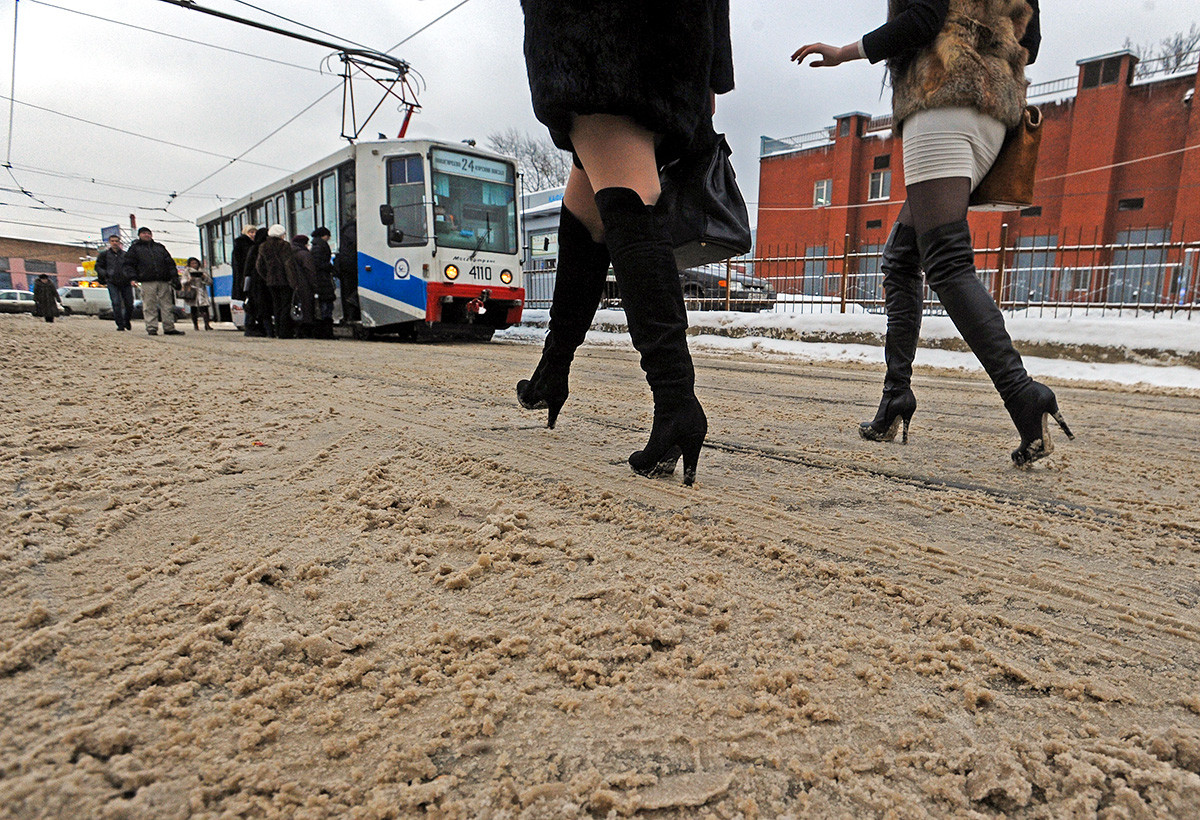 The result of treating streets with deicing agents

Another factor that contributes to slyakot is the worn-out state of storm drains, which are not cleaned regularly enough, while the sewage system itself is in need of an overhaul, according to the Association of Pipe Manufacturers.

The problem is partly caused by the fact that, in Russia, there is no requirement to build storm drains when laying roads in cities – the requirement is in place only for roads built outside of settlements. In a bid to save money, many municipal administrations decide not to install storm drains near highways, underpasses and pedestrian zones, which contributes to flooding and increases the likelihood of traffic accidents, while the service life of flooded roads is drastically reduced, according to the association’s general director Vladislav Tkachenko. 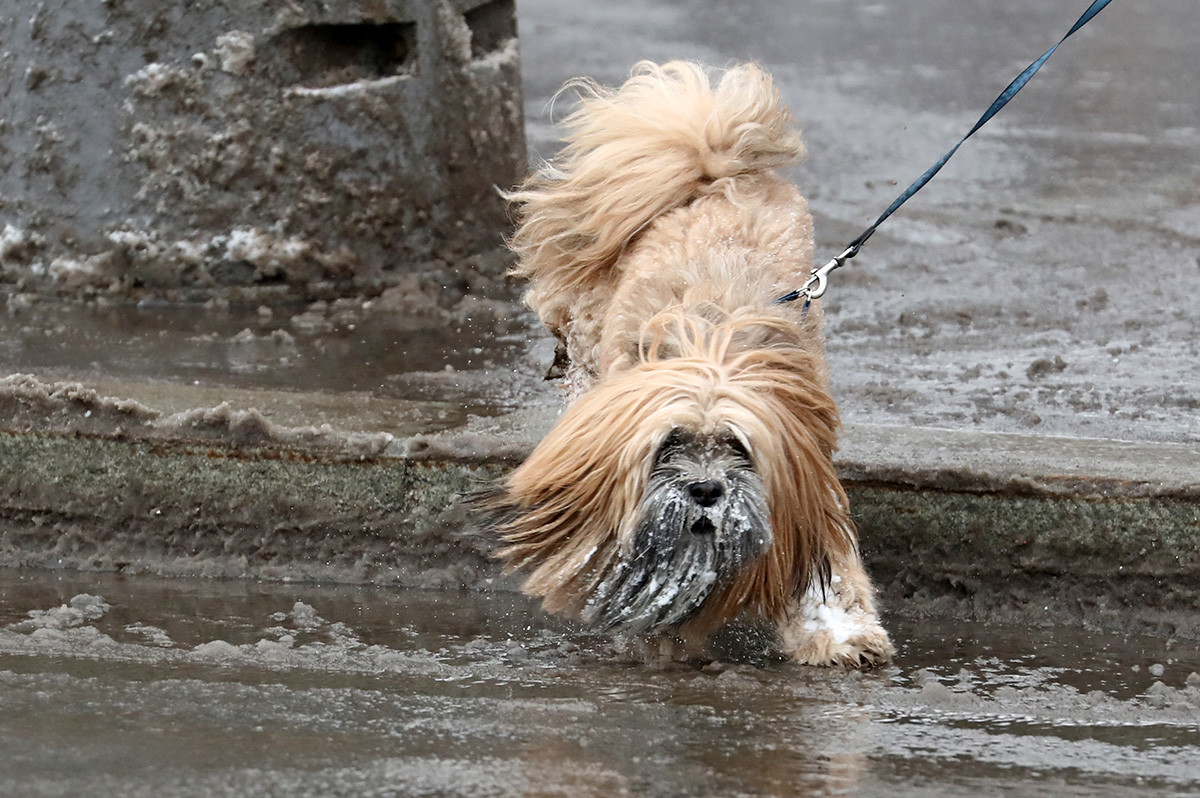 Russia. Moscow. A dog on one of the streets of the city

As a result, roads in towns and cities are designed as the local administrations see fit, without storm drains, that is why we have to repair our roads more often, cars are more likely to get into accidents, stall, get flooded, people continue to be inconvenienced as they have to jump over puddles, get their feet wet and fall ill,” Tkachenko explains.

The association has asked the State Duma Committee for Transport and Construction to introduce a mandatory requirement for all roads in Russia to have storm drains to the draft law on amendments to the law ‘On road and road activities in the Russian Federation’. At the end of April 2020, the association’s motion was rejected by committee chairman Yevgeny Moskvichev. 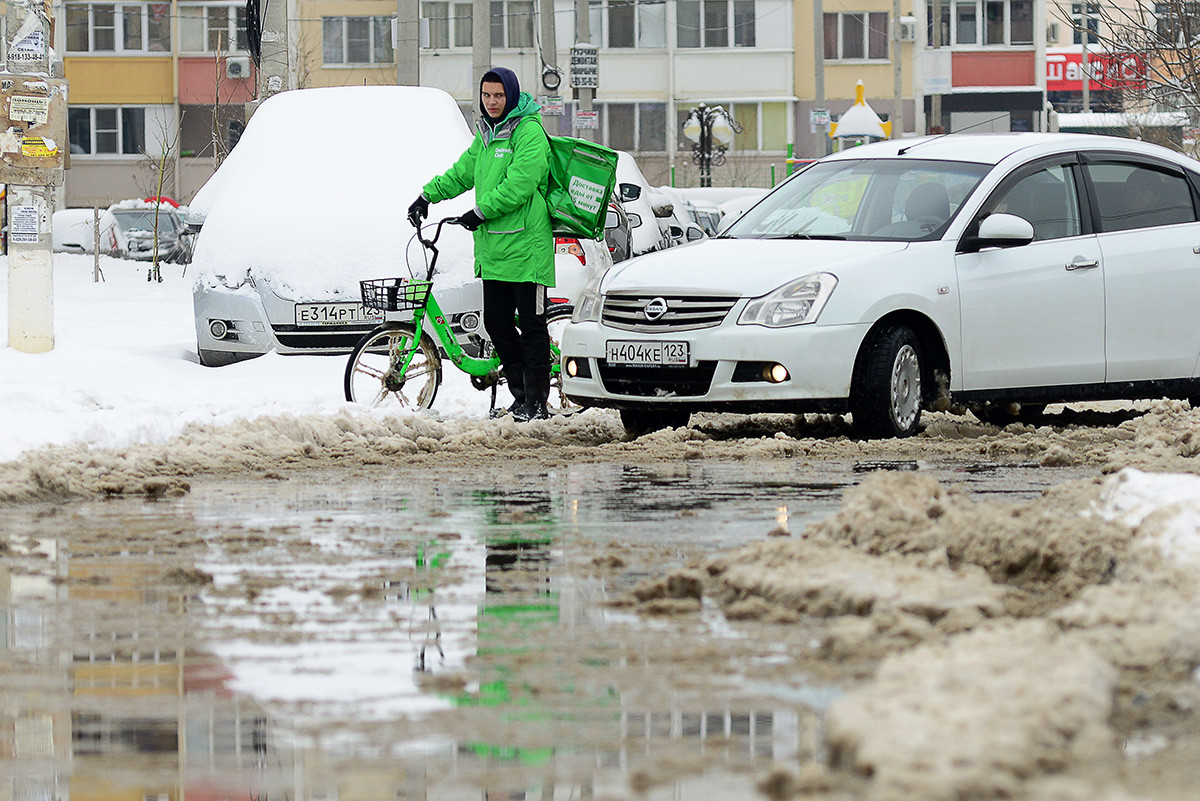 Krasnodar,Russia - February 7, 2021: A courier in a street after a snowfall. Since the evening of February 6, the city has been exposed to snow showers; the city airport has been closed

In response to a query, Moskvichev noted the importance of storm drains for improving traffic conditions and ensuring road maintenance. “However, the issue of fitting all roads with them is in no way related to the regulation of road funds that the draft law in question is about.”.

Russia Beyond has sent inquiries to the State Duma Committee on Transport and Construction, to the Russian Federation Ministry of Construction, Housing and Utilities, and to the administrations of the cities of Kamensk-Uralsky, Novosibirsk, Ob and Omsk.