How does Russia cope with its HUGE amounts of snow? 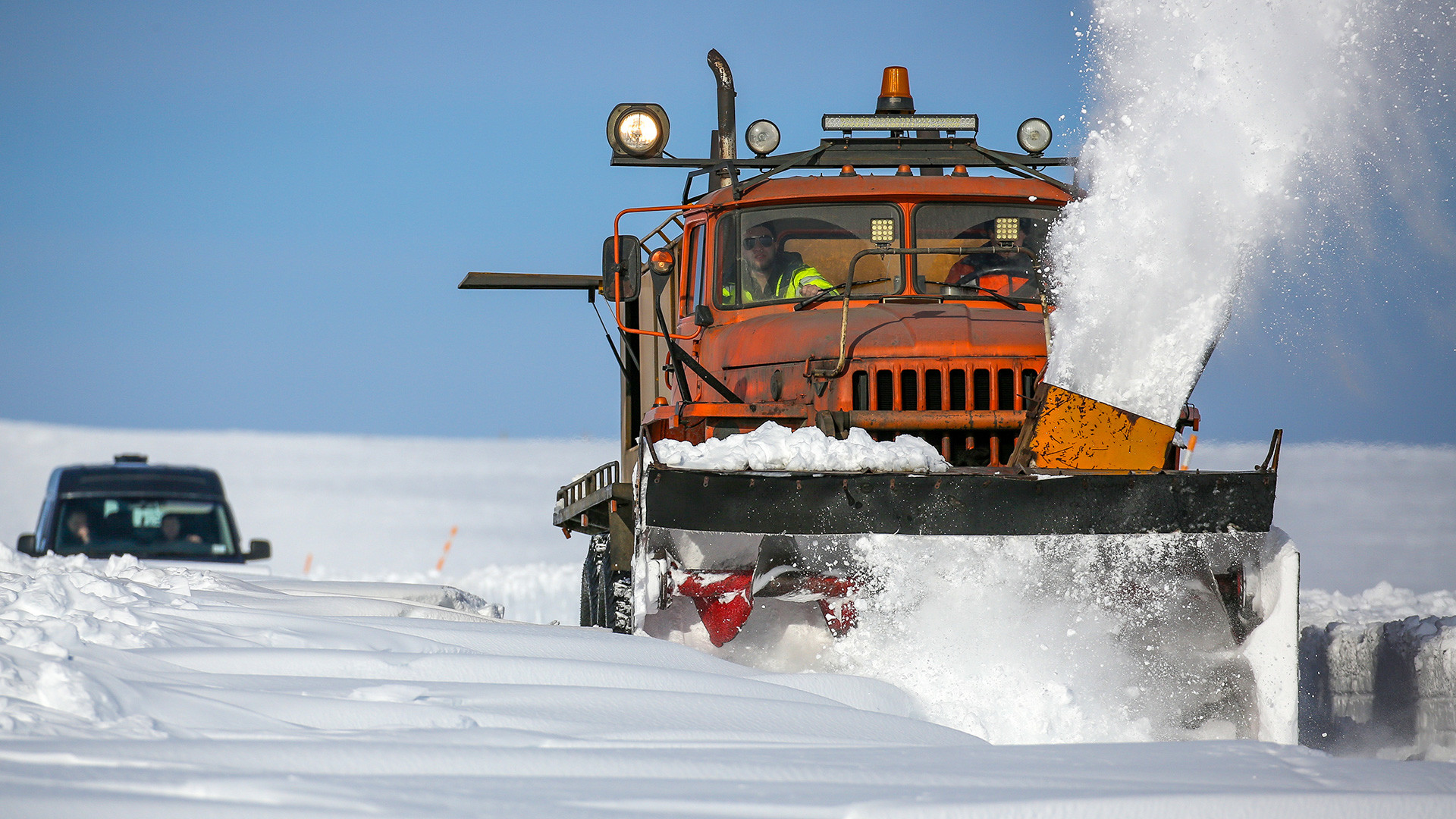 Pavel Lviv/Sputnik
Snow-removing tanks, inventive street cleaners and snow-melting pools – these are some of the secret weapons Russia uses to fight snow.

Usually, municipal services find out about an impending snowfall just four hours in advance: They get a warning from the weather forecast service. As little time as this seems, it does allow them to prepare for upcoming bad weather - ie. get snow removal equipment out and treat sloping streets, bridges and public transport stops with de-icing chemicals.

In every Russian city, all streets and avenues are divided into several categories, depending on their importance. When it snows, the municipal services first clear the most important areas of the city. These are the main thoroughfares, public transport routes, busy pedestrian streets and driveways to key buildings and facilities, such as hospitals, fire departments and police stations. 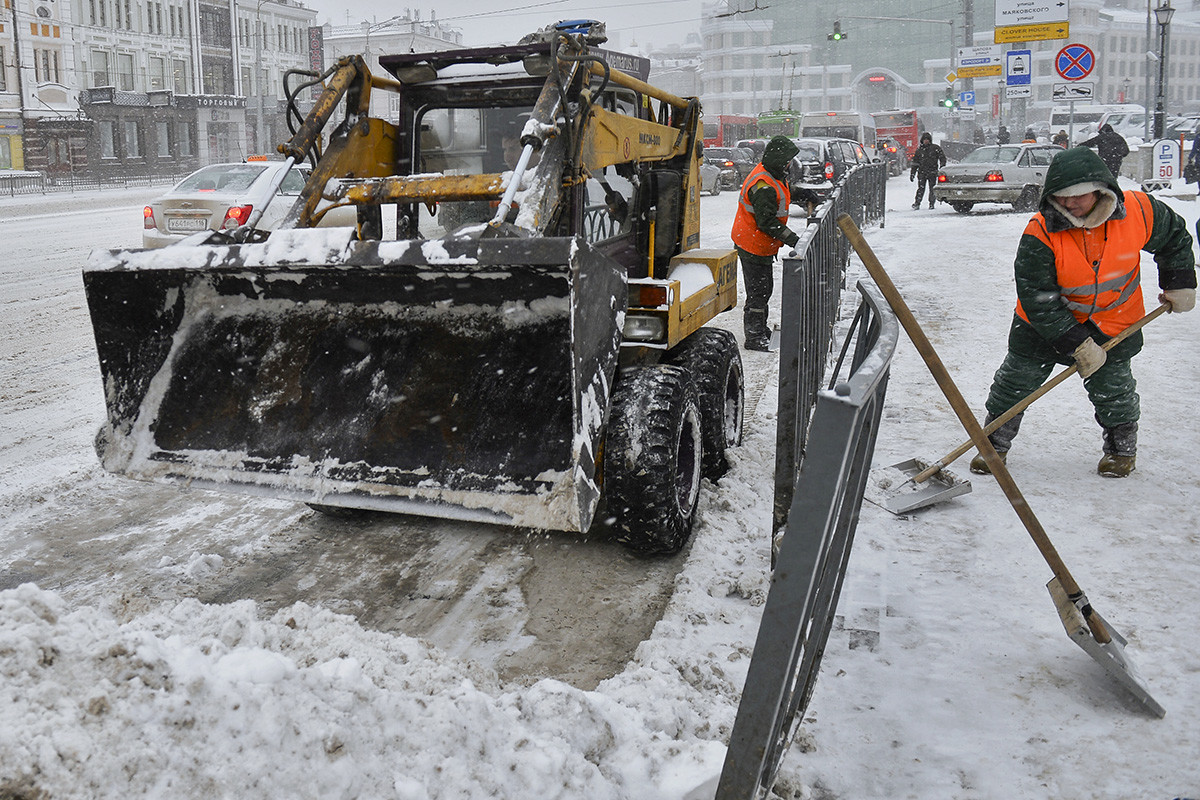 Then they clear snow from minor streets and driveways, gradually getting to schools, outpatient clinics, kindergartens, small sidewalks and entrances to residential buildings.

Also, cities have their own snow removal requirements for residential neighborhoods. For example, in Moscow, clearing of areas outside apartment blocks must begin when sidewalks are covered by at least 2 cm of snow. The intensity of snowfall also matters: If there is 1-2 cm of snow falling every hour, street cleaners have four hours to clear the snow and ice and must do it before nine in the morning on the following day. If the snowfall leaves more than 2 cm of snow per hour, they start cleaning it as soon as snowdrifts become 4 cm high.

Often, there is so much snow that all the schedules are thrown out of the window and municipal services have to clear the snow around the clock. In the fall of 2020, round-the-clock snow removal had to be implemented in Volgodonsk (1,100km from Moscow) and Saratov (842km from Moscow). 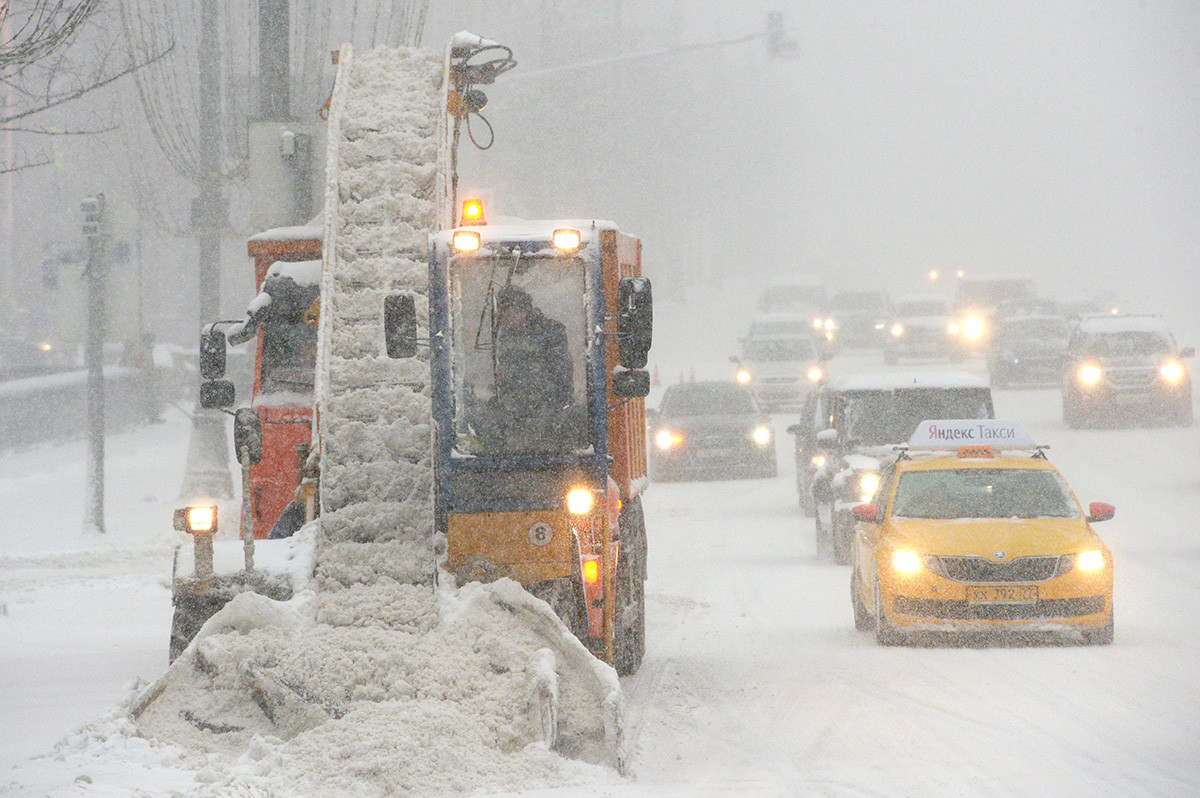 Municipal services are issued with various utility vehicles for snow removal: most often, these are snowplows (on the basis of KamAZ trucks) or snow loaders. Moscow, for example, has a fleet of some 7,600 winter service vehicles, while in other cities these fleets can be less numerous, but still have hundreds of vehicles. In addition, street cleaners armed with ordinary shovels clear the snow outside residential blocks or sometimes collect remaining snow once utility vehicles have passed.

Municipal services’ task is to sweep the snow into piles and then load them onto dump trucks. Pedestrian streets and roadways covered with ice are treated with de-icing chemicals or just sprinkled with sand so that people do not slip on their way to school or to work.

READ MORE: How Moscow is rescued from snow and ice every winter

Until 2002, snow collected in Moscow was dumped into the Moskva River. However, now, snow in the capital is melted into water with the use of special snow melters, as well as in other large cities with a population of over one million people, such as St. Petersburg, Kazan and Novosibirsk. 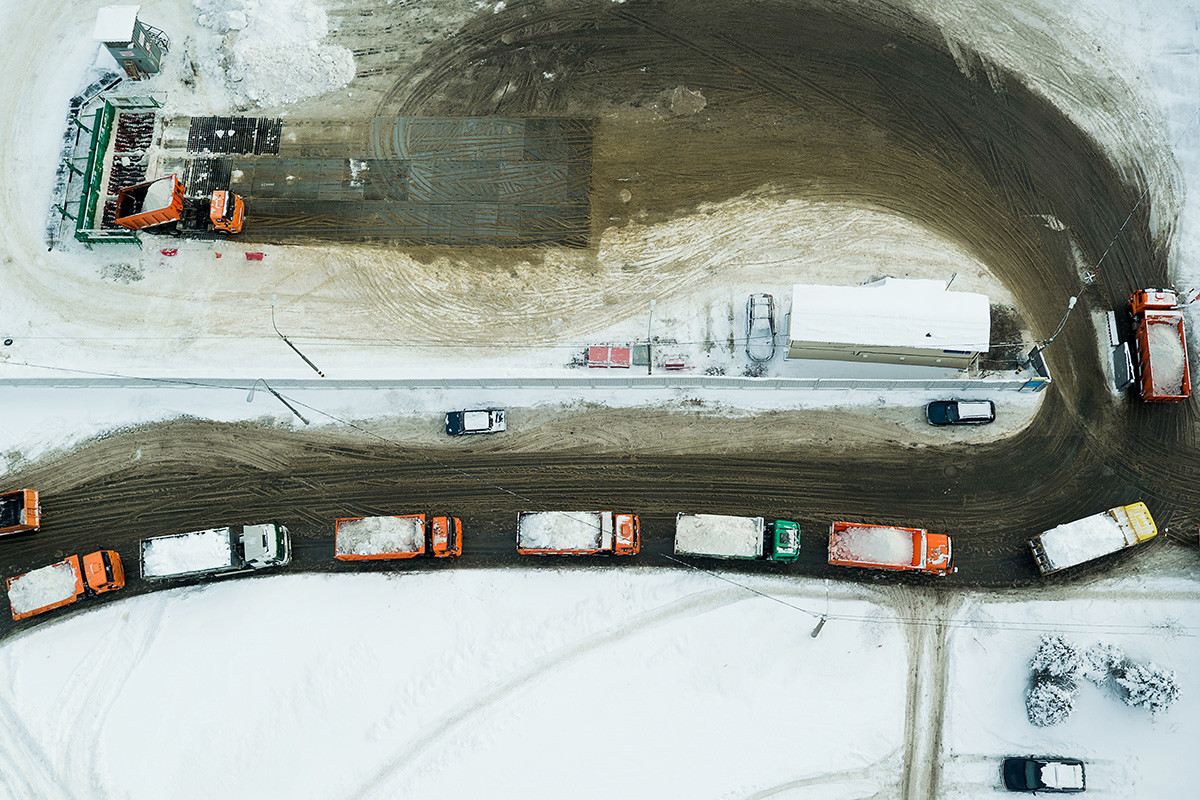 Snow melting facilities consist of two concrete “pools” and two pumps, says Georgy Levin, an operator with Mosvodostok, the city’s water drainage systems company. Snow is dumped into the first pool, into which hot water is pumped - there the snow is melted. The meltwater is then transferred to the second pool, from which it is discharged into the sewer and then into the Moskva River. The pools are fitted with grates for catching large debris that may have been scooped together with the snow.

“[Among the debris] there may be flower beds, curb stones, once there was even a baby carriage,” says Alexei Boykov, deputy head of operations at a district snow melting facility in Moscow. 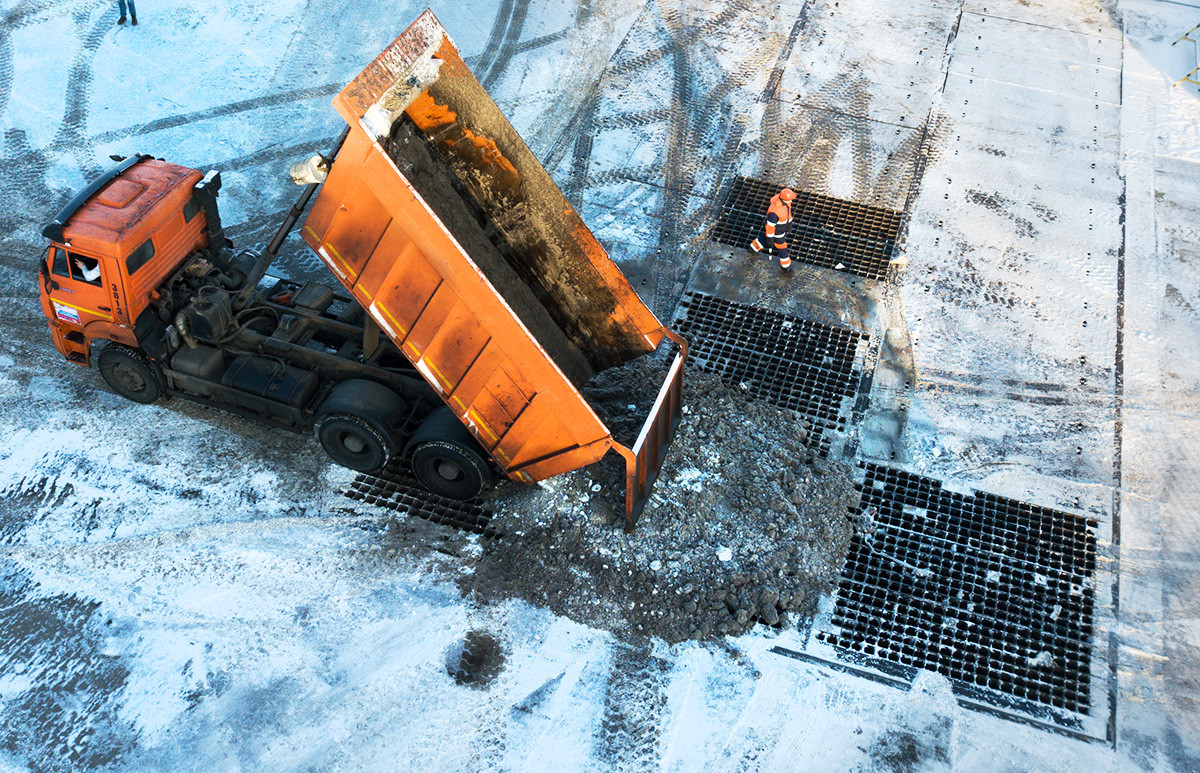 Work of the snow melting point in Moscow

In addition to snow melting machines, all cities have snow dump sites. All snow is taken there and is left there till it melts in the spring. For example, one such snow dump site in Yekaterinburg can receive about 120,000 tons of snow during one winter.

Help from the military

On November 20, 2020, Kaluga, a city 195 km from Moscow, with a population of just over 300,000 people, was hit by freezing rain and snow. Roads, cars, road signs and benches were buried under snow. It snowed for two days, but already on day two, the local municipal services realized that they could not cope with 22 cm-high snowdrifts.

“Let’s try to negotiate with our military units. <...> Because the city does not have enough resources to cope with these weather conditions,” head of the city Dmitry Denisov said on November 23. 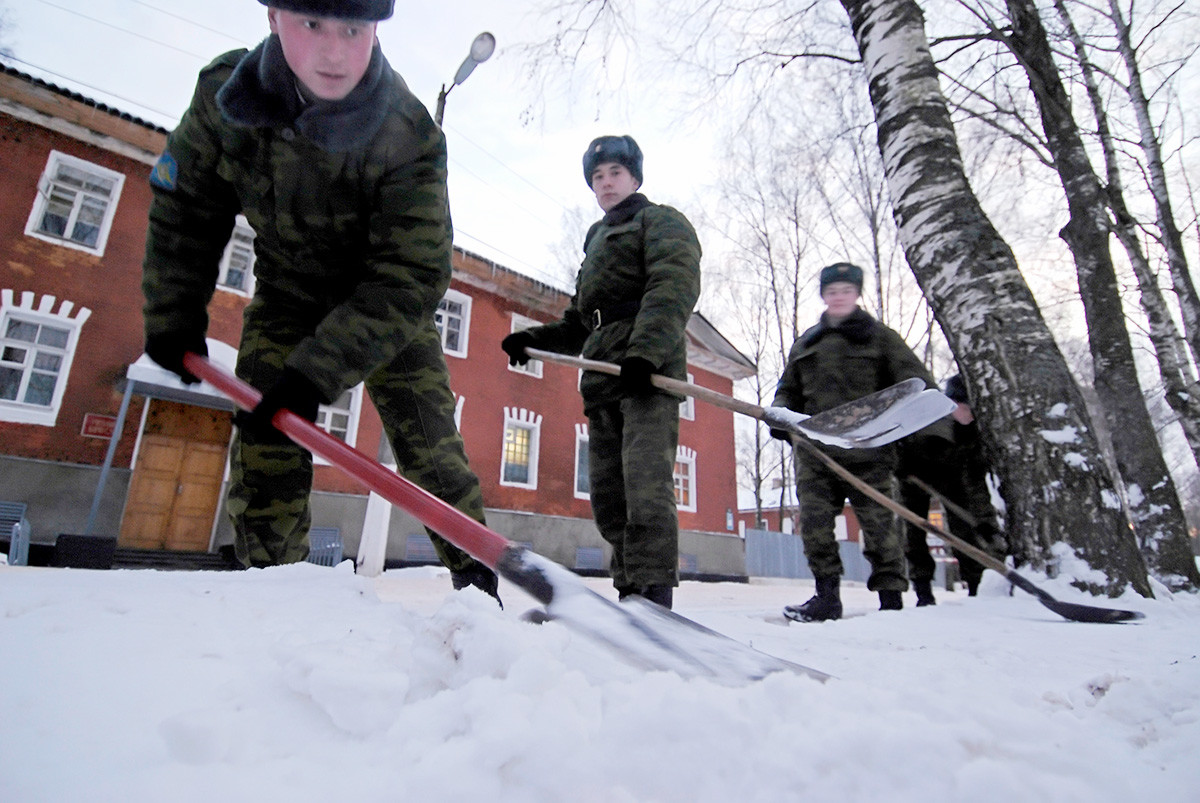 Snow removal on the territory of a military unit located in the village of Novoselitsy, Novgorod region

This practice is not new: In the event of an unusually strong snowfall, local administrations often ask the military for help with clearing the snow. Thus, in 2018, after the heaviest snowfall of the past 140 years, the military cleared roads in Moscow and Moscow Region and, in 2019, in Kursk Region (525 km from Moscow), Volgograd (969 km from Moscow) and Saratov (842 km from Moscow). However, even tanks cannot always cope with snowdrifts.

“This tank skidded and this one broke down,” says a serviceman in this mobile phone footage of tanks stuck in snow in January 2019.

Some snowdrifts cannot be reached even by tanks. In April 2020, the northern village of Teriberka in Murmansk Region was cut off from civilization for two weeks due to snow that had blocked the road to it. Food for local residents was delivered by sleigh, while the road was eventually cleared with the help of a convoy of special vehicles. 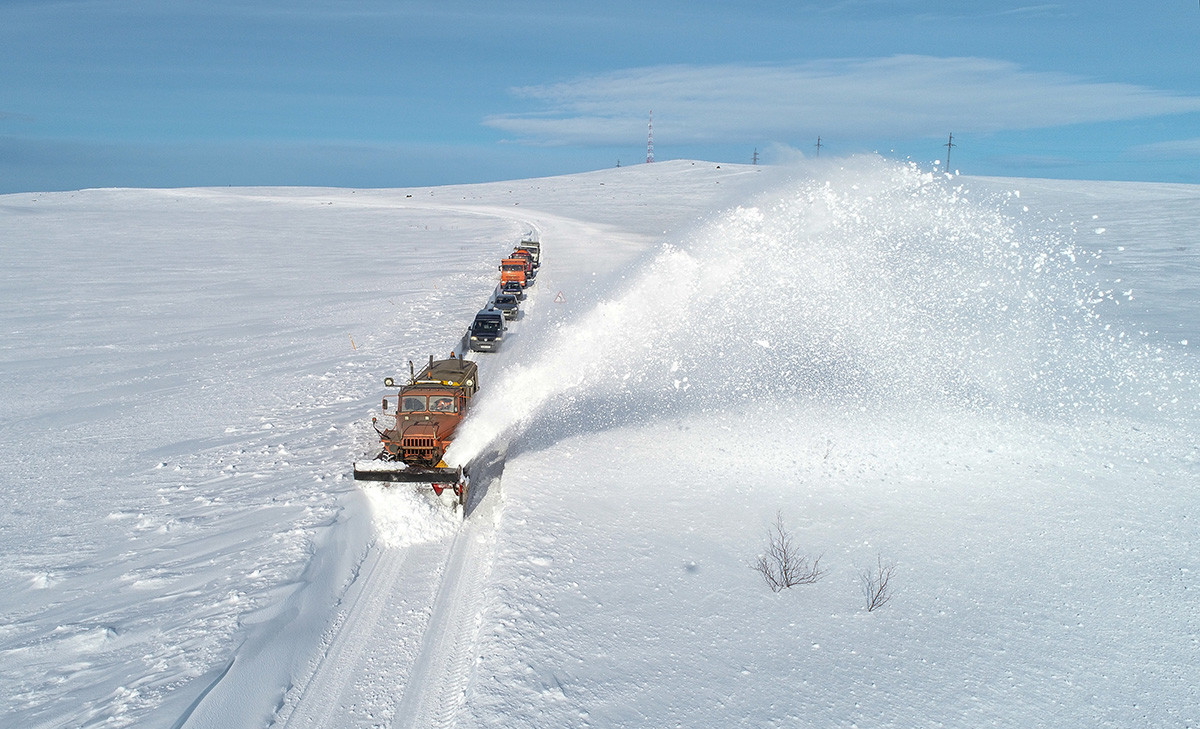 “We have lived in the village for 20 years. There were instances when you would leave the house and find yourself in a snow tunnel, but things have never been as bad as this. Everything should be done on time and there should be good equipment,” a resident of Teriberka, Larisa Kholodova, complained.

In 2013, three inventors from Perm (1,400 km from Moscow) designed an automatic snowplow, a small robot with a bucket for clearing areas outside private houses, which can be operated remotely with a joystick.

“The robot has three modes. The first is when the user operates it remotely, standing by the window, looking out and controlling it, without going outside. The second mode is akin to a computer game - you look at the monitor and operate the robot. The third mode is offline. The user cleared the snow, pressed the ‘Save’ button, and the next time it snows, they press the ‘Play’ button, and the snowplow robot performs the exact same task again,” said Oleg Kivokurtsev, one of the developers. 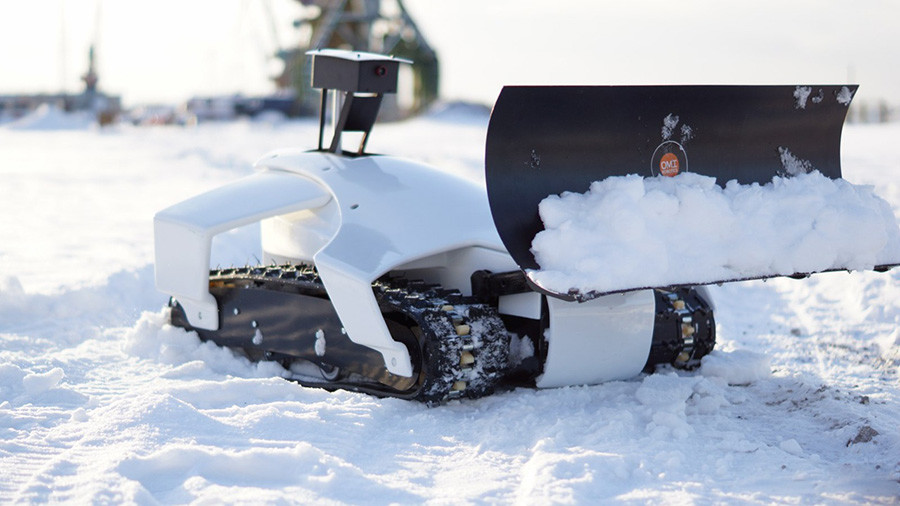 At the time, the inventors managed to sell some 50 robots to Europe, but none of their devices made it onto Russian streets.

In 2020, in Perm Territory, street cleaners were issued with leaf blowers instead of shovels, while one street cleaner from Kemerovo (3,600 km from Moscow) used a lawn mower, which turned out also to be quite good for clearing snow.

Similar inventiveness was demonstrated by Moscow street cleaner Andrey Petrov: In February 2020, he started clearing snow on an electric unicycle and using a snowplow he had made himself.

“I made the bucket from a gas cylinder cut lengthwise, took the wheels from a garden cart, and the handles from a pipe. <...> This work is physically demanding, but still there is a feeling that you are doing something that people need,” Petrov said.