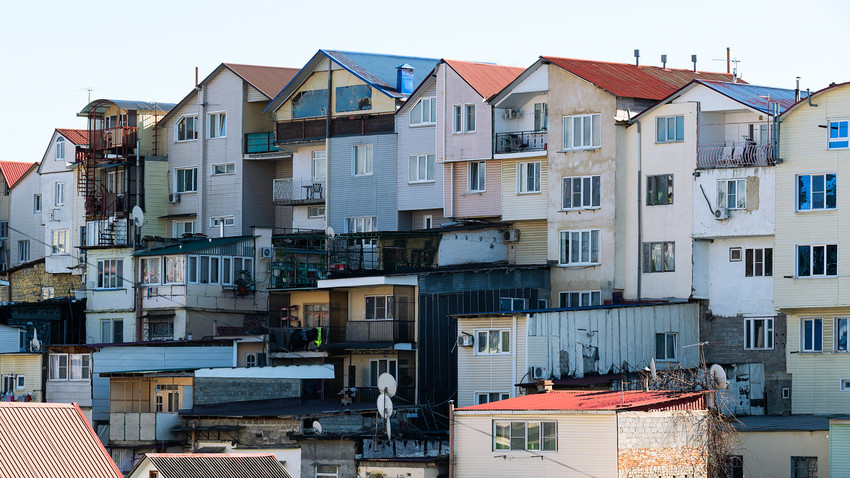 Residential garages in the city center.

Arthur Lebedev/Sputnik
Sochi is the city that hosted the 2014 Winter Olympics and that hosts millions of tourists every year. And yet, at the very heart of it there is a “favela”, but – unlike its Brazilian counterpart – this one may surprise you with what you’ll find inside.

The resort city of Sochi on the Black Sea coast is associated with luxury hotels, wine terraces, pebble beaches, mountains, relic forests and waterfalls. And... a real “favela” practically in the city center. 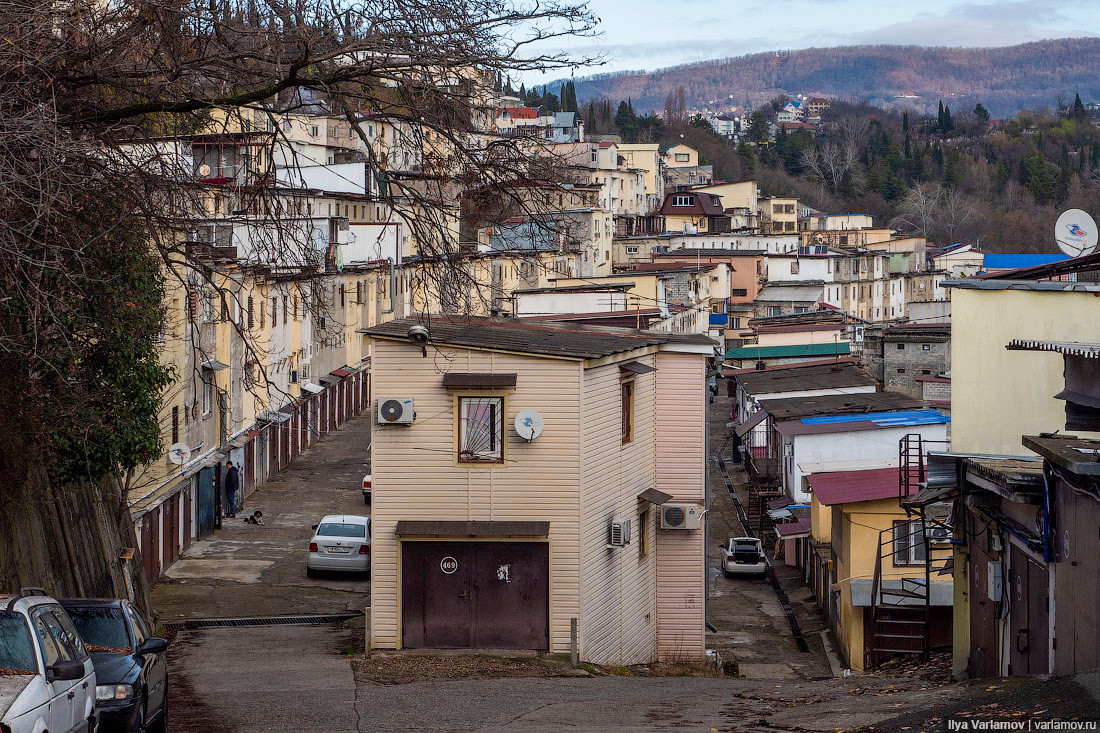 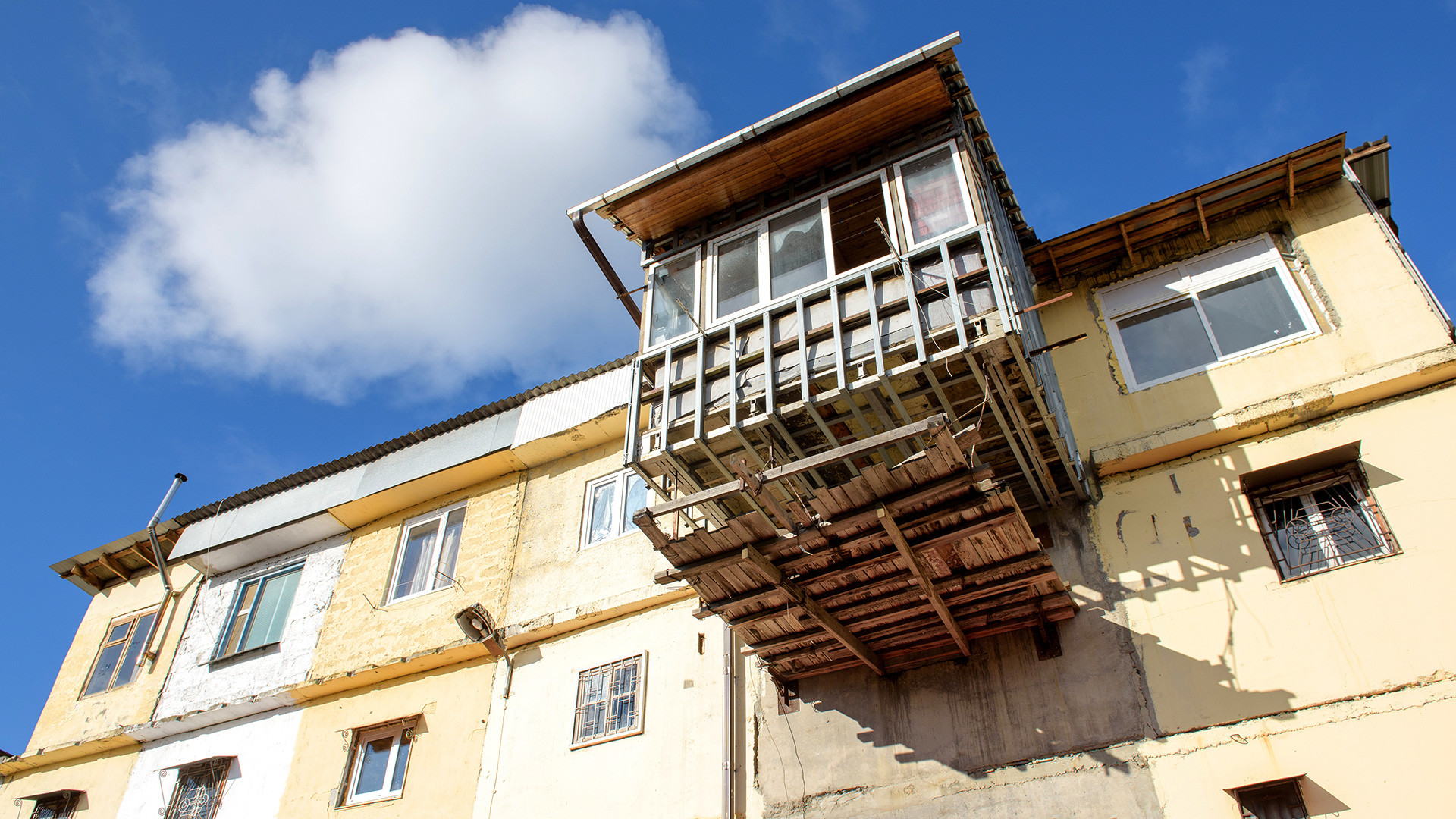 "They were built in violation of all possible rules and regulations, common sense and laws of the Russian Federation”.

Unlike the infamous Brazilian favelas, the one in Sochi is not as dangerous, but no less colorful. You can go on a guided tour around it, it’s featured in video blogs, police raid it from time to time and, for two decades now, city authorities have not been able to figure out what to do with it.

How did it come about?

In fact, these multi-storey buildings were once ordinary garages. Alpiyskaya Street is in the very center of Sochi and it is there that garage blocks were converted into a makeshift residential neighborhood currently housing several hundred people. This is the largest area of garages in Sochi that has been converted into residential buildings.

Some of these houses are several storeys high. An absolute record for Sochi is a 10-storey “garage”. They are known as “garage skyscrapers”, a Russian phenomenon that exists only there. 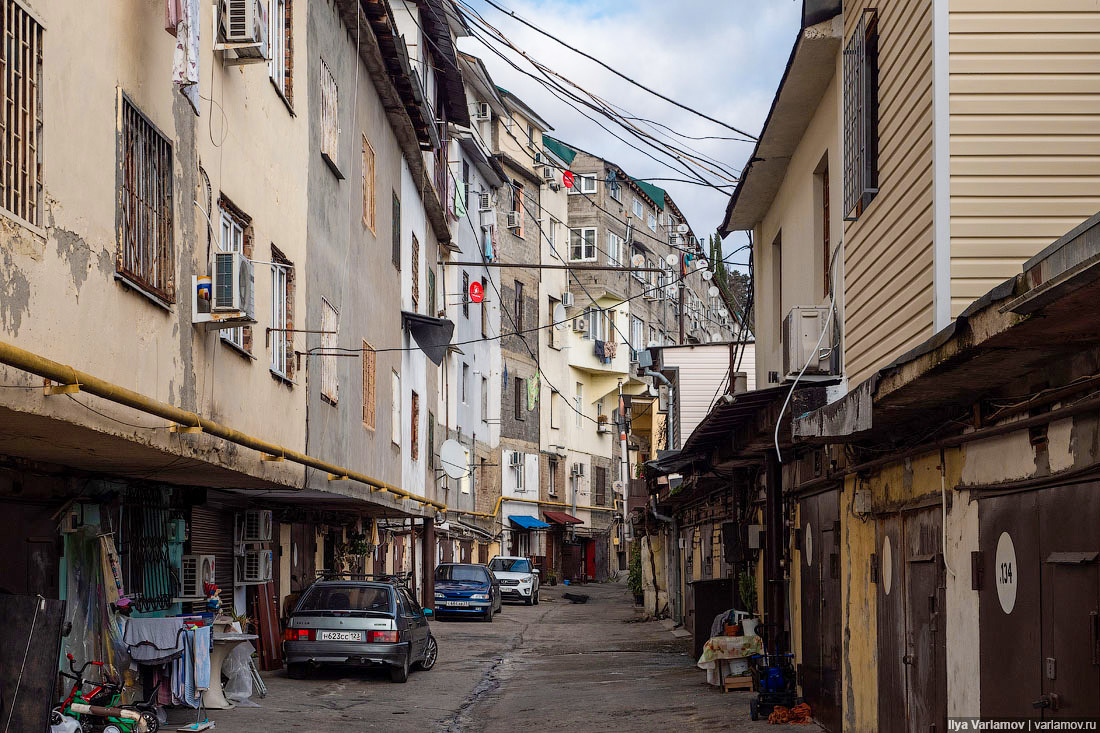 Mass construction there began back in the 1990s.

Mass construction there began back in the 1990s, thanks to amendments to the City Planning Code, which allowed for the expansion of existing buildings, but only vertically. Sochi, where real estate prices are traditionally high, took advantage of this. Thus, storey after storey would be added to an ordinary garage, turning it into an apartment block, offering the cheapest housing to be found in this popular resort city. 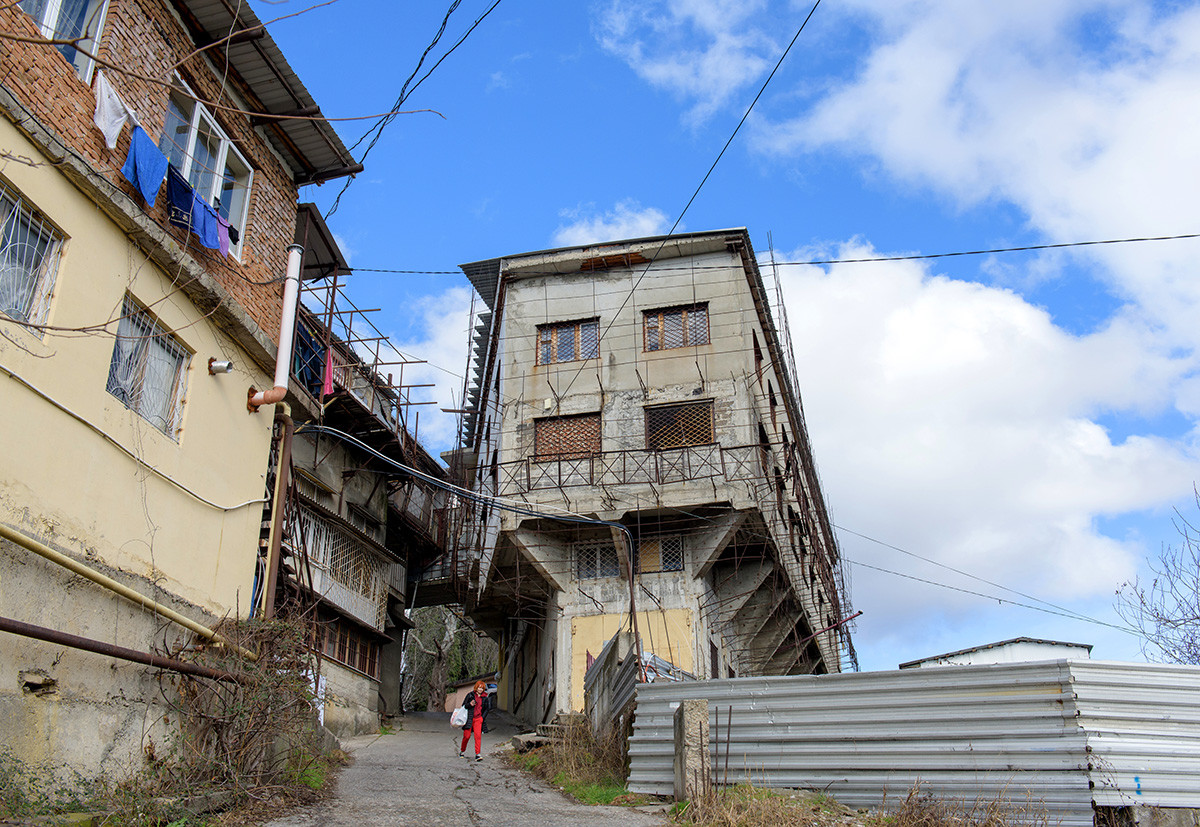 These buildings have a controversial legal status.

Since the law does not allow for a garage to be re-registered as a residential building, these buildings have a controversial legal status. No matter how many floors it has and whatever is inside it, as far as official papers are concerned, it is still a garage. Which creates numerous problems for people living in them.

“People do not settle here without a reason. I would have never moved here if I had a choice.”

“Unlike in [Brazilian] favelas, here you won’t get robbed. Maybe only at night.”

“There are no proper living conditions here, there is no sewerage. God forbid I should live here.”

This is just a fraction of what Sochi residents themselves have to say about this neighborhood. From the outside, this collection of improvised buildings crowding a hill slope does not look particularly appealing. However, on the inside, they are little different from what you would find in an ordinary apartment block. 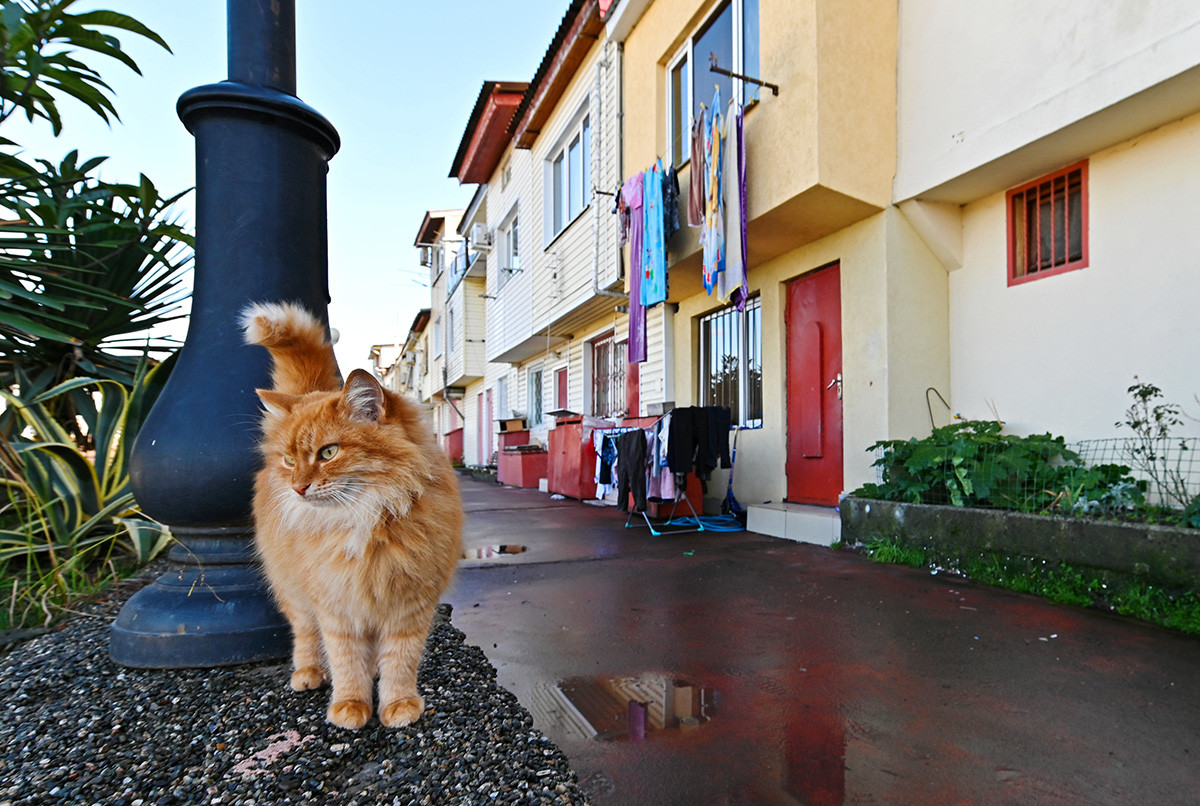 Garages are available for long-term rent.

Most of the buildings there are, in fact, connected to electricity, water mains and sewerage. What they do not have is connection to gas mains, so residents have to use electric cookers or cylinder gas, which is fraught with tragic consequences in the event of a fire, for example. 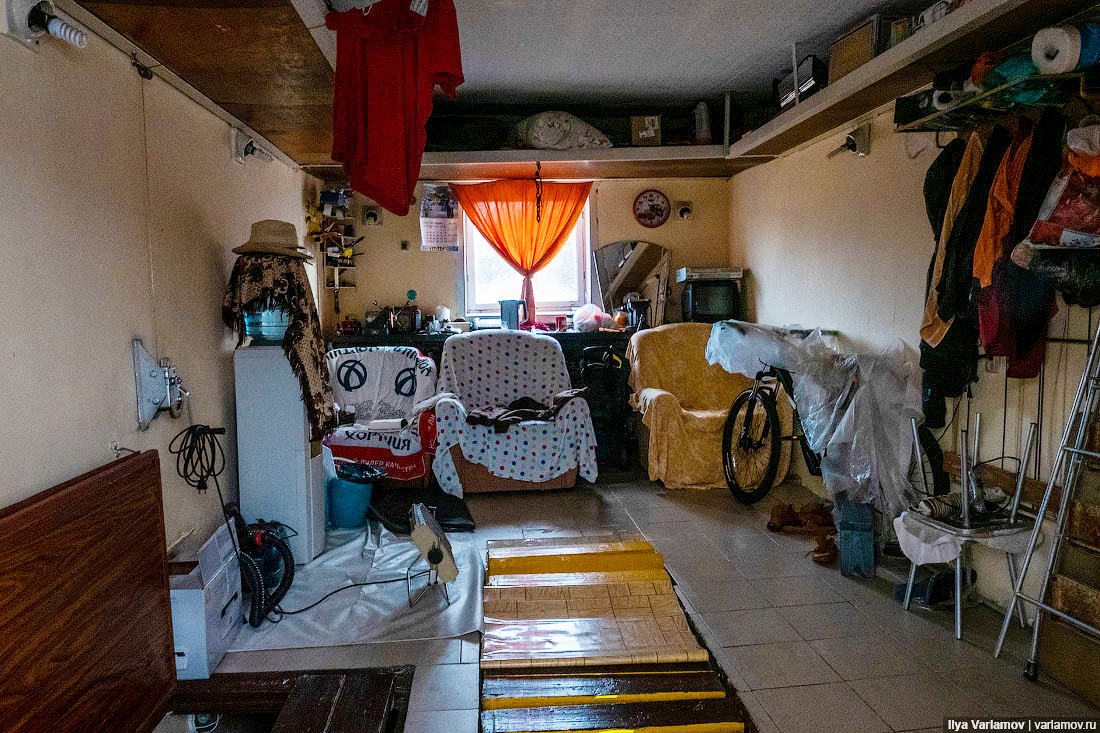 Buildings there are connected to electricity, water mains and sewerage.

The ground floor is still often used as a garage, while the floors above it are arranged as an ordinary apartment: there is cold and hot water (there is usually a boiler installed), a washing machine, a shower, a toilet, a kitchen with an extractor hood and other amenities.

Some of the former garages have been converted into a semblance of a suite in a luxury hotel: “I was staying in a residential garage - three floors. On the ground floor, there is a heated garage with a pit, on the first, a studio, a kitchen, a bathroom with a swimming pool and a sauna for two and, on the second floor, two more rooms and a jacuzzi. It was cool, except for one snag – to get from one floor to another, you had to use outside stairs,” writes Loki23rus. 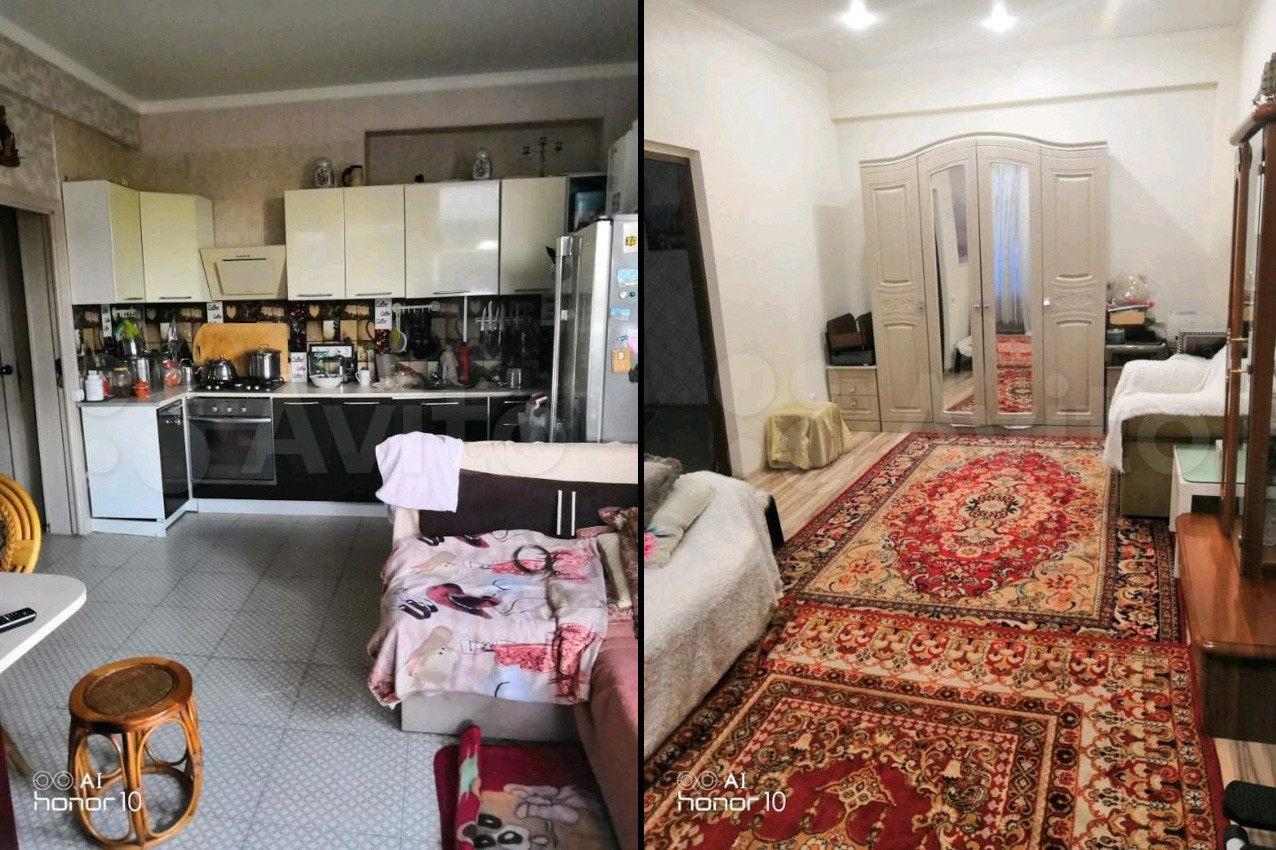 Floors are arranged as an ordinary apartment.

Installing outside stairs is a popular option here for connecting the floors or making a separate entrance for each floor, especially when they are rented out. So that residents of each floor can book a taxi or order food delivery with ease. 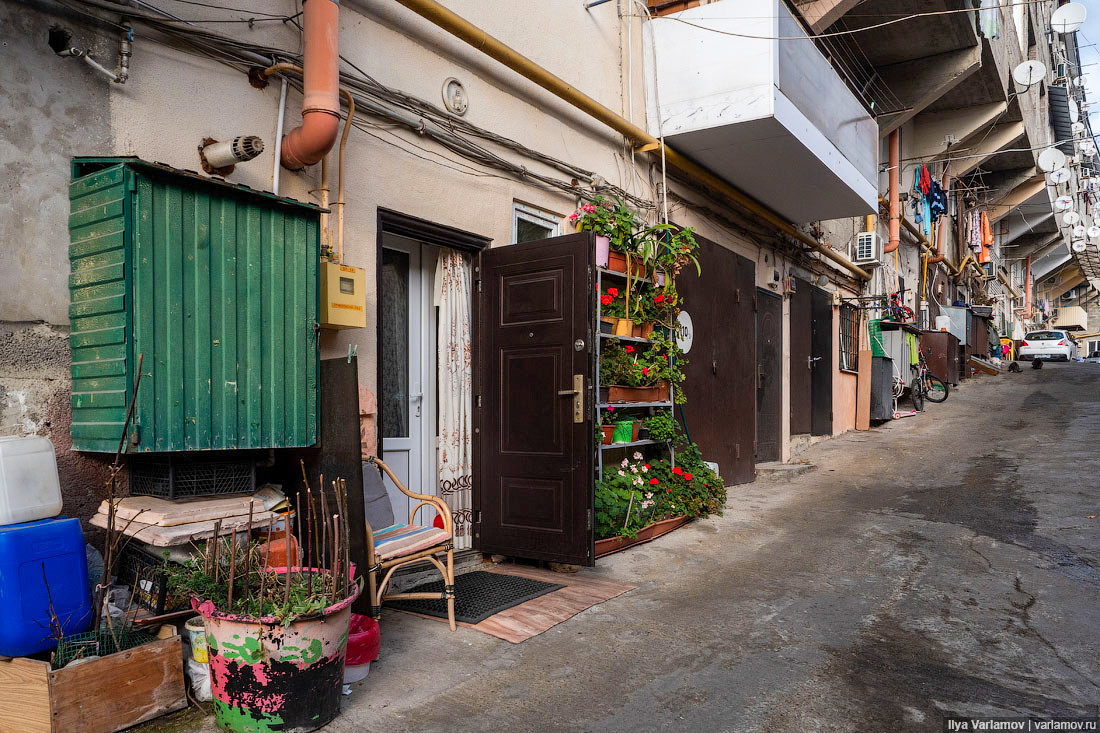 “In general, these residential garages are a kind of a state within a state. There is a tire service, one of the garages works as a gym. There used to be a sauna in another, but it burned down. There are many families with children there, almost every other garage. Suffice it to say, they are attached to a local children’s clinic as a separate neighborhood,” says Sochi resident Evgenia.

How much does it cost and who lives there?

As a rule, garages are available for long-term rent, at least for a season. Although, the favela offers plenty of weekend accommodation options for tourists, too.

“Everything that can be rented out here, is. Even a chicken coop. As long as there is demand. Especially, if it is within walking distance to the sea,” writes Evgenia. 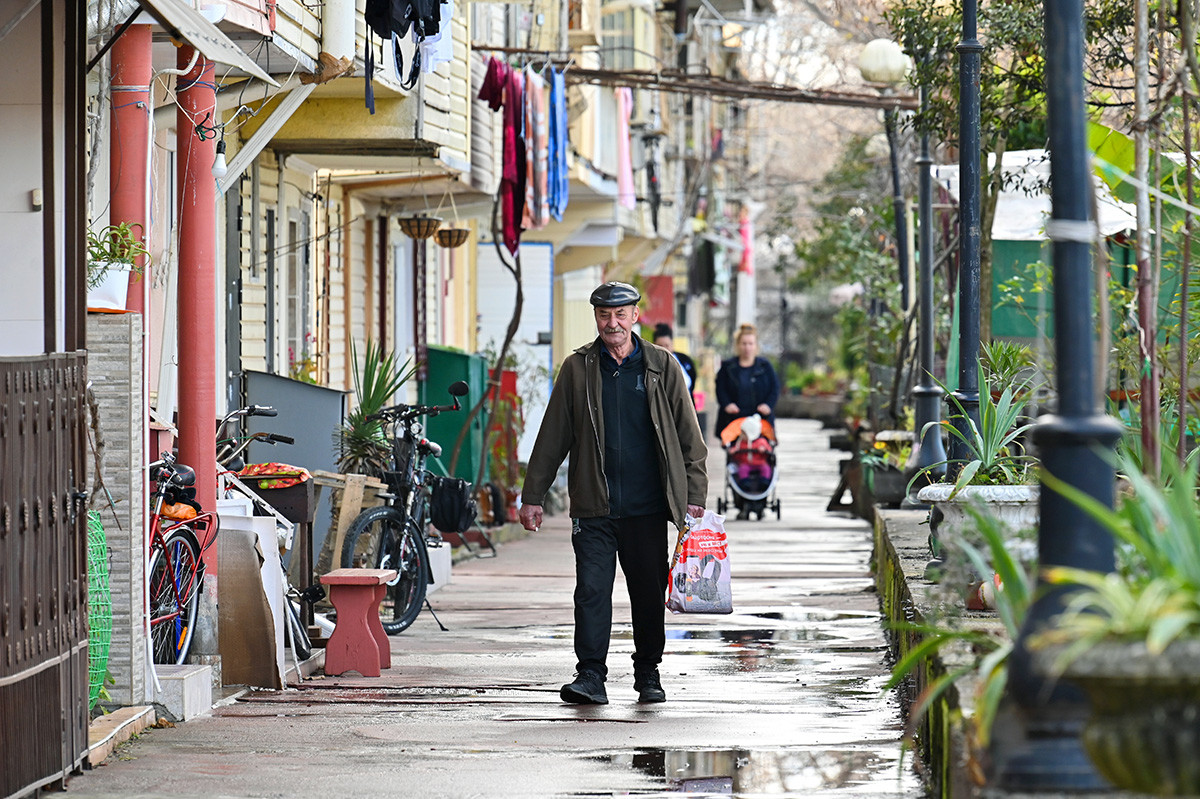 Furthermore, these properties do not come cheap and sometimes are sold at prices comparable to those of ordinary apartments of the same size. For example, a room (a floor) in a garage costs about 1.5 million rubles (approx. $20,300), while a two or a three-storey garage would cost in the range of 6-10 million (approx. $81,000-135,000). 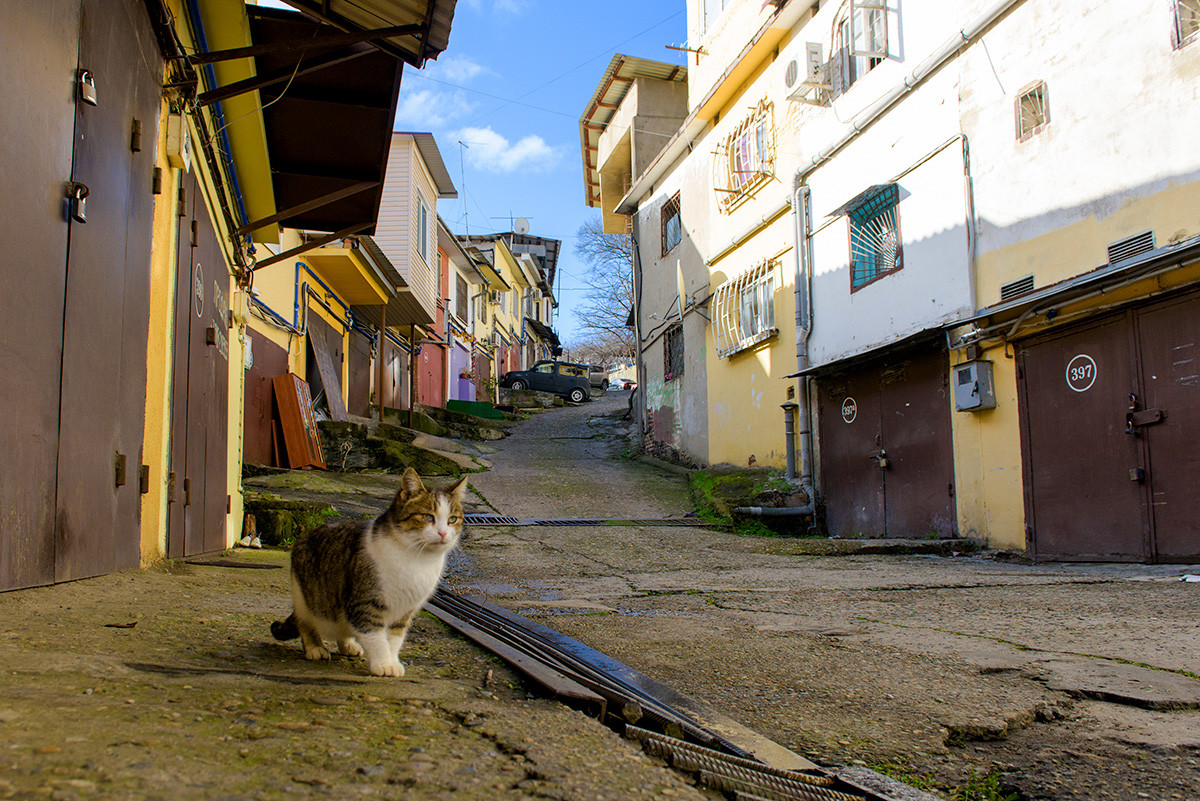 Russian phenomenon that exists only in Sochi.

The local population is mostly made up of visitors to the city, guest workers, students, tourists on a small budget, or the original owners of the garages, who have, over the years, managed to build themselves a “penthouse by the sea”.

‘All this can go up in flames’

Crime in this “favela” is not rampant, but since people live there without registration, this part of the city has turned into a bit of a “gray zone”. The head of the press center of the Sochi Internal Affairs Directorate, Alexander Runov, says police conduct raids of the favela on a regular basis: “As you know, there is the phenomenon of ‘rubber apartments’ [with 10-20 people, usually illegal immigrants, living in one apartment]. We also often find brothels there. Sometimes garages become a haven for guest workers from the Central Asian republics. Often these ‘tenants’ rob their landlords, those who rent out garages as accommodation.” 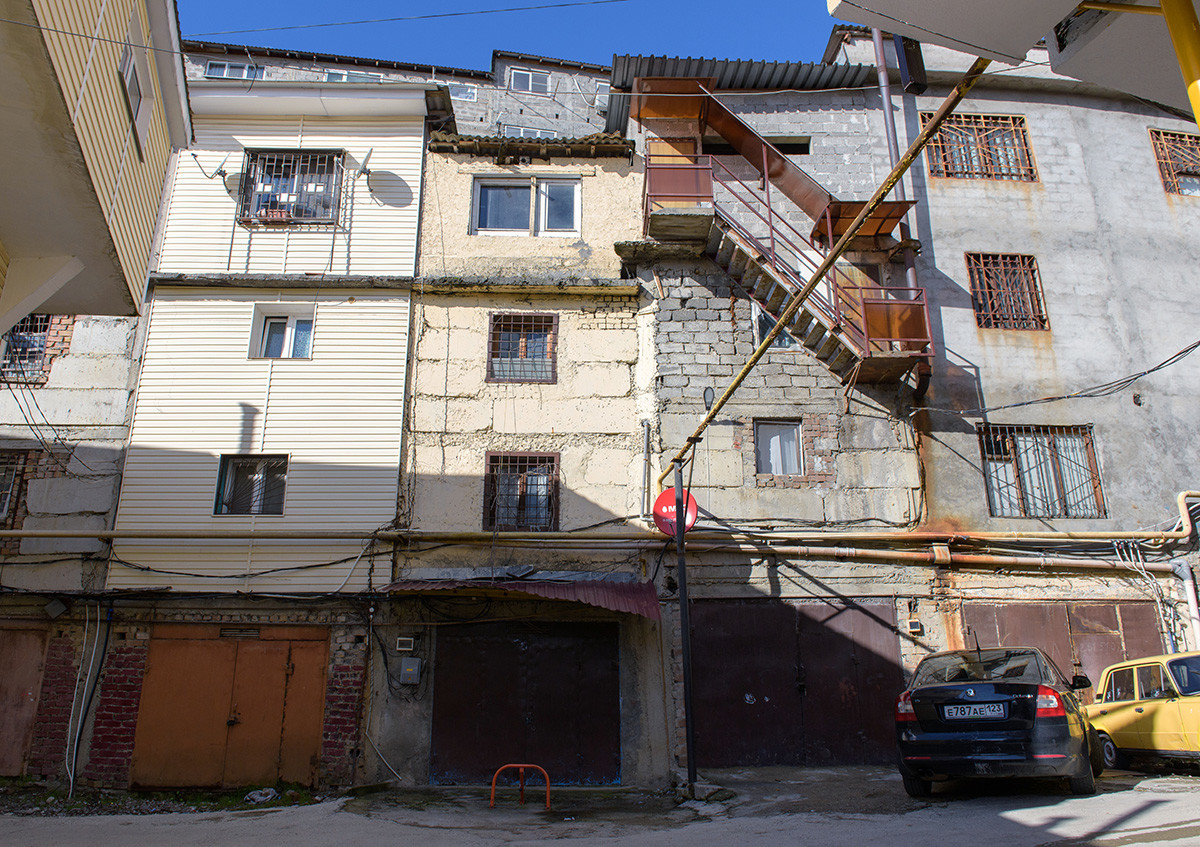 There is the phenomenon of ‘rubber apartments’.

Sochi residents have their concerns about the favela, too. “It’s one thing that they are cheap accommodation, but they were built in violation of all possible rules and regulations, common sense and laws of the Russian Federation,” comments DsmiollaCnews. “Living there is not just dangerous, but very dangerous, because they were built in a seismically active region, there are gas cylinders inside and no-one has ever done any structure analysis there. 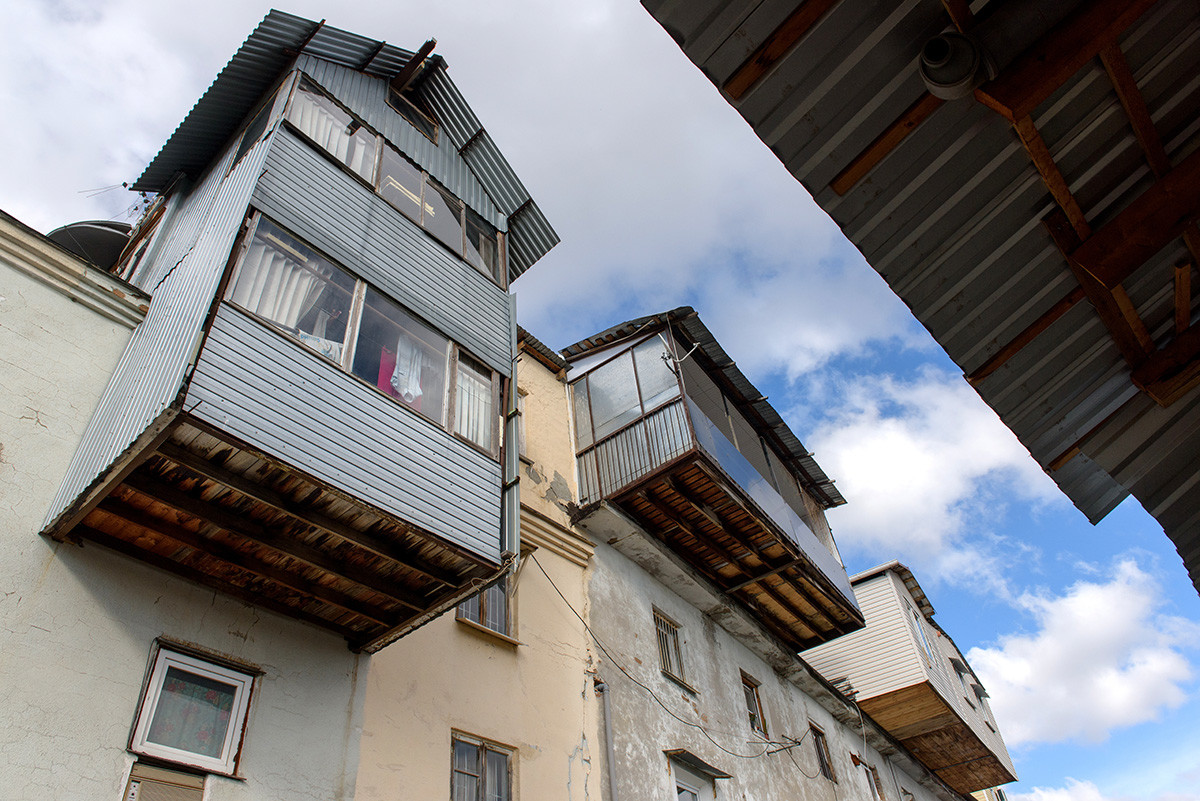 No-one has ever done any structure analysis there.

“All this can explode, collapse or go up in flames at any moment. Furthermore, there are no water pumps there for fire engines, no free access to buildings, no space. To say nothing of the fact that people living there cannot officially register in that address, apply for a pension, postal services and so on.”

City authorities have been struggling with what to do with the “favela” for several decades: on the one hand, it is private property and they cannot just raze it to the ground; on the other, the properties are being misused. In the meantime, residents of the favela are waiting for the so-called garage amnesty, which would allow them to re-register their garages as residential property. The relevant bill has already passed two readings (out of three) in the lower house of Russian parliament.