Have Russians started to smile more? 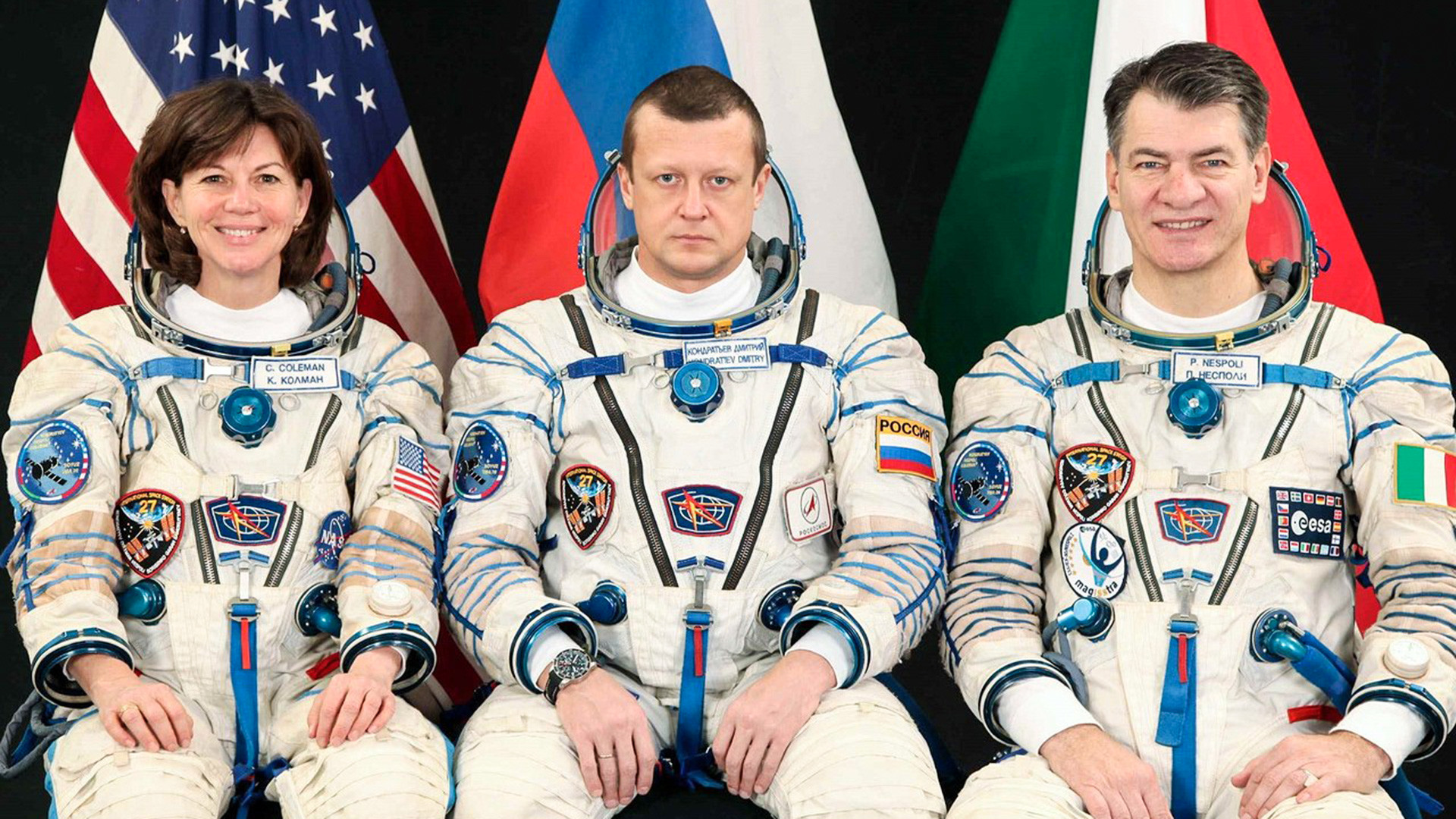 Gagarin Cosmonaut Training Center
“Russians never smile” is a long-standing stereotype among foreigners. Whether it’s true, and whether smiling plays any role in Russian life, we found out by talking with Russian flight attendants, retail and restaurant employees, as well as others in the “smiling” professions.

It’s 5 a.m., a young waiter with black curly hair, after his latest shift at the club where he works in Orenburg (1,400 km from Moscow), lies on the bed and stares at the ceiling. The lines of Russian rapper MiyaGi ring in his ears:

Bosses and kites without love

Lanterns fly over the city above.

Bilal has been working as a waiter for 12 years. Six days a week he wears his uniform and shows off his perfunctory smile for several hours each shift.

“I was always told that if you smile, people will like you and tip you. The stereotype still exists, so I now smile automatically. Half the time I get a smile back in response,” says Bilal. “The only downside is that it drains your mood. My colleagues have the same thing. Maybe we give them [customers] our energy.”

He plays the MiyaGi track after each shift and dreams of opening his own restaurant, as well as writing a book about the restaurant business. Then, he’d no  longer have to serve cocktails and smiles for a living. 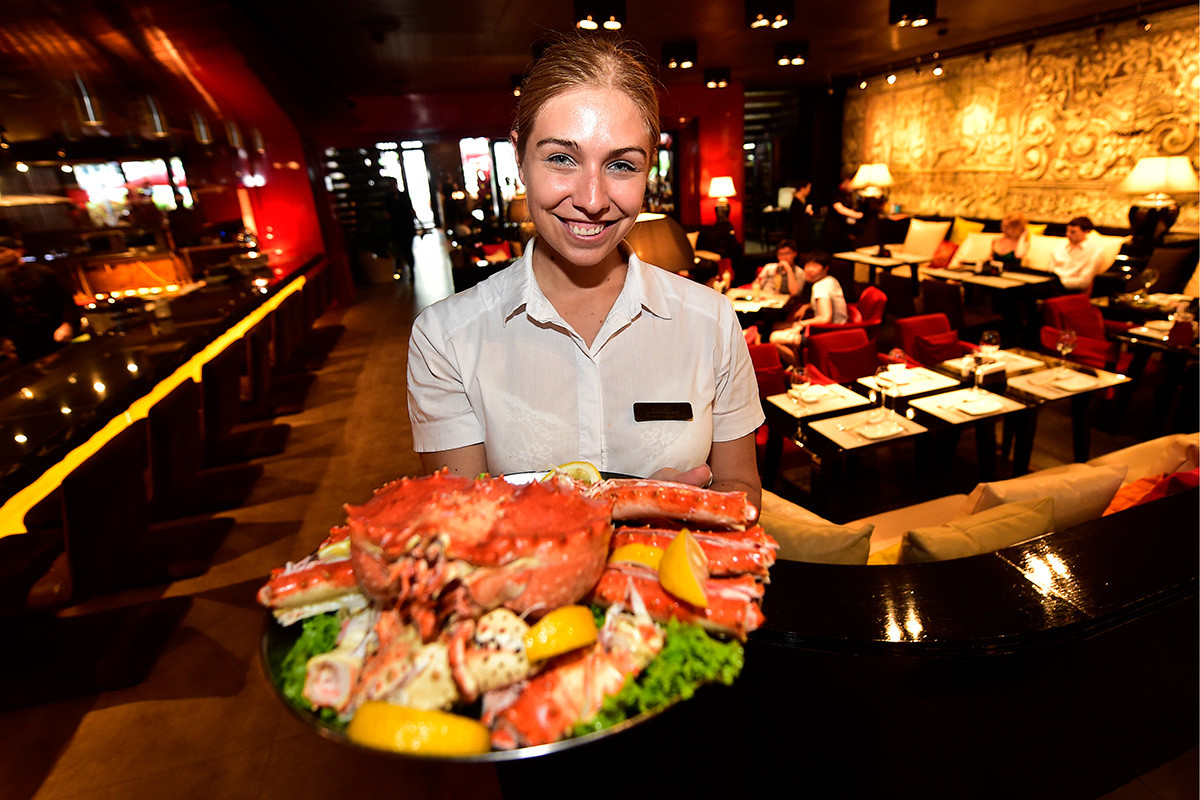 According to the 2019 Smiling Report by the Mystery Shopping Professionals Association (MSPA), employees in Russian stores, cafes and restaurants  now smile 18% more often than in 2010. The top smiling year for Russian sellers was 2017, when they took second place in the ranking for the first time. In the opinion of Karina Pipiya, a sociologist at the Levada Center, this was due to the general rise in public sentiment that year – studies from that period painted a picture of overall satisfaction with life, income and the powers-that-be.

Pandemic-stricken 2020 has had a negative impact, however, and judging by conversations with flight attendants, waiters and retail workers, Russians now smile less.

Daria became a flight attendant at a major Russian airline in April 2021, after completing her training.

“We were told in class to put on a smile together with our uniform, to leave all problems on the ground. Psychologists taught us to think positively and recommended meditation, but when a passenger violates the on-board rules of conduct, does not fasten their seat belt or takes off their mask, there is no time for smiles – we have a very serious word,” says Daria.

Daria said that most Russians’ reaction to flight attendants’ smiles is "neutral", that is, they rarely smile back. She says that Europeans, as well as Russians who often fly abroad, smile most often. But Russians on domestic flights tend to be straight-faced. Daria has not yet flown to Asian countries.

Anna, a flight attendant with more than three years’ experience, said that Russians smiled most often during the 2018 FIFA World Cup, which the country hosted. With the onset of the coronavirus pandemic, there’s been a sharp drop in on-board smiles (as well as flights). 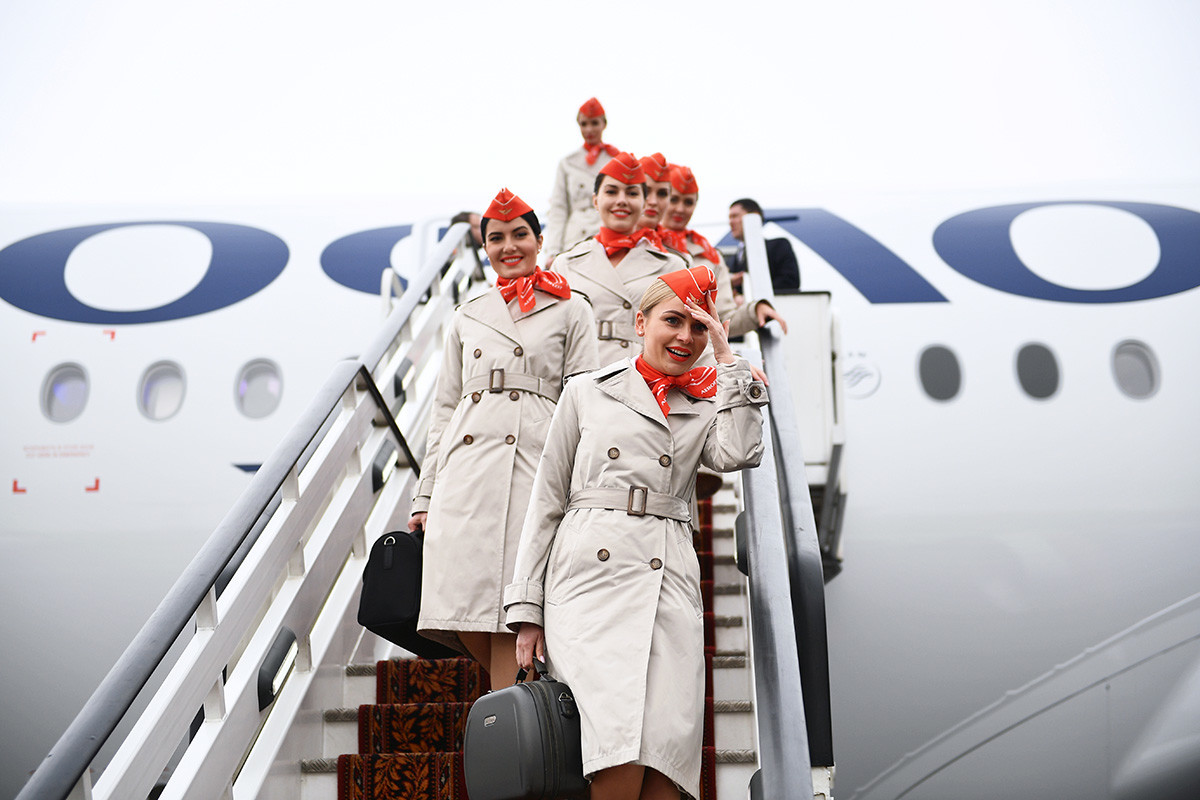 “You can’t imagine how happy people were when we announced the scores of matches during flights when the World Cup was on. Everything was simpler, people were more warm-hearted. Today, a rude person might react nastily to a smile, anything can happen. Even if people do smile, we can’t see it behind the masks, and it’s increasingly hard for flight attendants to keep smiling, since the virus has decimated the industry, people are losing their jobs. People have become angrier, everyone’s tired of all this,” surmises Anna.

According to Natalia, a flight attendant with more than two years’ experience, the requirement to wear masks during the pandemic has made smiling less common.

“But we’ve learned to smile with our eyes, which passengers feel and respond positively to,” says Natalia.

In October 2020, Pobeda, a leading Russian airline, even planned to purchase 3,500 “face trainers” – mouth braces to improve smiling technique – for use at its flight attendant training school. But the company canceled the order, explaining that it first wanted to test the effectiveness of the device on a small sample of wearers.

“Our flight attendants have mastered the art of the flawless smile: every day we get feedback from appreciative customers who note the mood on board,” the airline's press service told Russia Beyond.

According to Natalia, who has waitressed for nine years, cafe- and restaurant-goers in Russia’s regions almost never smile.

“In Volgograd, people practically never smile, but when I moved to Moscow, I was shocked by the friendliness and kindness of Moscow customers. There’s probably no point smiling at people in the regions,” she admits.

In regional shops and showrooms, the situation with smiles is the same, says Roman Gotovko, a sales assistant at the Abrau-Dyurso wine boutique in Irkutsk.

“I think customers’ capacity to smile and radiate warmth depends on their emotional load of personal problems and worries. If you smile sincerely, not forced, you can extract a reciprocal smile from the customer. But in ordinary situations, I feel that Russians generally are smiling less often,” explains Roman.

According to Ksenia Semenkina, a sales assistant at a Svyaznoy cell phone store, the number of smiles among customers has dropped sharply in the past five years, but not due to personal problems, but because the public has grown accustomed to smiles from salespeople. 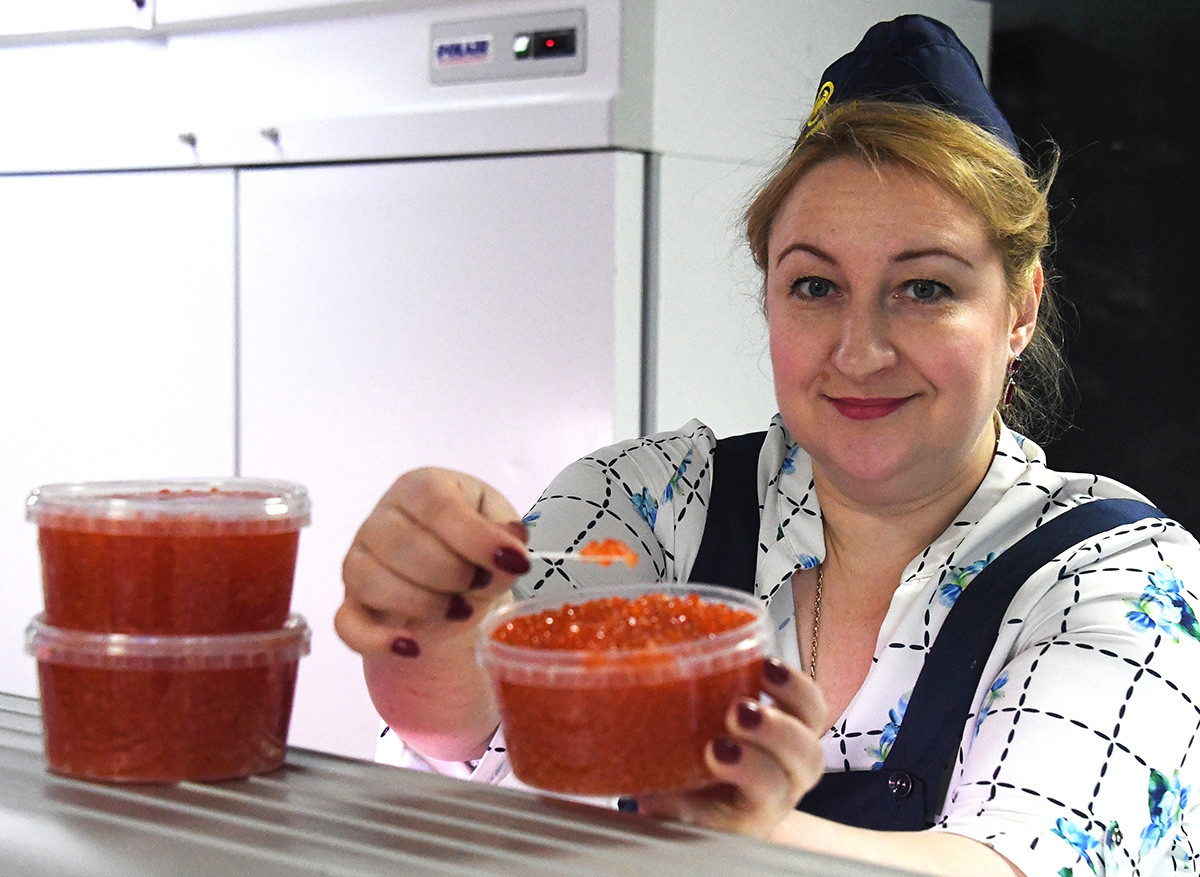 “Lots of competitors have appeared where the customer service is no worse, so [customers] have started taking it for granted. Why should they bother smiling back?” reckons Ksenia.

Furniture seller Leonid Sobchenko agrees that the number of smiling Russians has declined, but attributes this to rising poverty.

“I remember back in 2012 people smiled much more often when buying new furniture for their apartments. Now it’s much harder for them to part with the cash, there’s no time for smiles,” Sobchenko is sure.

Smiling is not for Russians

Almost half of all Russian citizens are likely to experience negative emotions, such as ill-treatment, fear, resentment and envy, says Karina Pipiya.

“In general, smiling is not synonymous with happiness and positivity in the minds of Russians. Moreover, the negative emotions experienced by Russians are unlikely to ever be voluntarily converted into ‘smilingness.’ Another matter is that work standards and ‘algorithms’ in the service sector (the obligatory smile and greeting as a job requirement) are perhaps changing, which in turn affects the positive dynamics,” explains Pipiya.

According to psychologist Olga Golitsyna, the Russian service sector is indeed trying to accustom people to smiles and positive thinking, but the perma-smile “everything’s great” attitude does not work.

“Smiling all the time is not inherent to human nature. It is natural for a person to react emotionally to many things, and all these emotions get reflected on the face. You can’t constantly conceal household, financial and family problems beneath a smile, this will negatively affect your health. Another question is the culture of working through such problems with a psychologist, which is developed in the U.S. and Europe,” says Golitsyna. 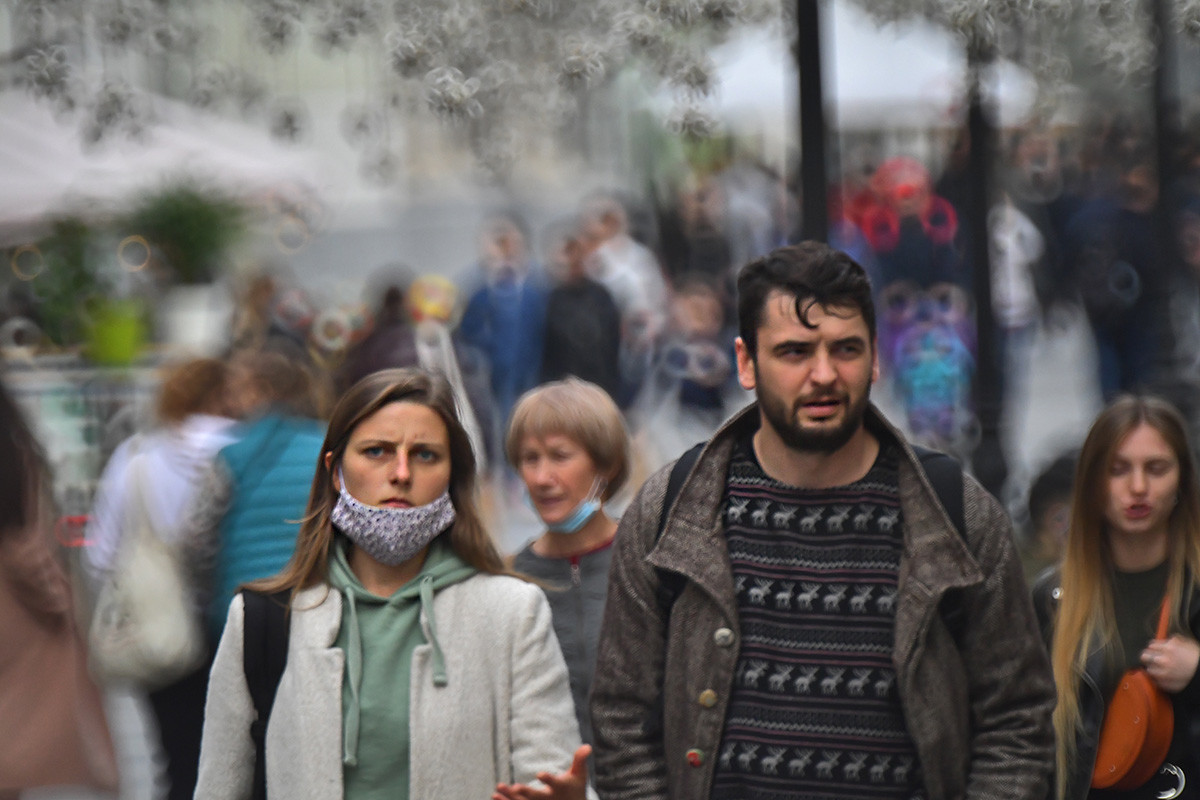 People on a street in central Moscow

In her opinion, Russians do not smile not because they are rude or tetchy, but because they do not know how to handle their emotions, which leaves an imprint of “national gloom,” Golitsyna believes.

“In order to smile, it’s first necessary to learn to communicate with yourself and your inner being; then Russians will start smiling more often,” the psychologist concluded.