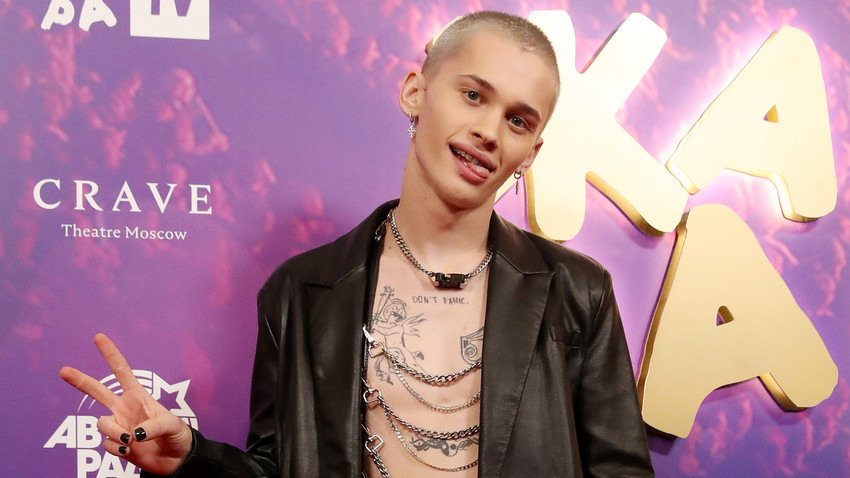 Vyacheslav Prokofyev/TASS
Just two years ago, he was selling balloons, doing drugs and shoplifting food. But now, he’s sitting in the same room as multimillionaires and discussing where to invest money. Find out more about the phenomenon of Russia’s leading TikTok influencer Danya Milokhin, whose popularity makes the country’s top businessmen lie on the floor, literally.

“I need to make a TikTok video, but to do it you’ll need to lie on the floor... Raise your hand who is ready to do it,” says Danya Milokhin, a 19-year-old guy in a pink shirt and an Adidas cap, at a session at the St. Petersburg International Economic Forum (SPIEF), the country’s main business forum, which has Russian President Vladimir Putin among its speakers and where an entrance ticket this year cost almost one million rubles ($13,830).

Everyone raises their hand, including the marketing director of Russia’s largest bank Sber, a vice-president at Aliexpress in Russia and a former presidential candidate. A couple of seconds later, people in jackets and shirts are lying on the floor of the conference room, some with their legs raised and resting on the chairs. Milokhin is lying down on the desk. Dozens of cameras are filming the proceedings, which look totally out of character for an event like that.

“Somewhere at a serious event”

Milokhin is one of the most popular TikTok bloggers in Russia; he already has 12.9 million followers. According to Forbes, he makes 2 million rubles a month (approx. $28,000). In 2020, he won GQ’s ‘Discovery of the Year’ award. He posts videos with dances, his songs, jokes and challenges. The more shocking, the better. At the St. Petersburg economic forum, after the session and filming his TikTok video, he fled from journalists saying: “I need to pee.” Some were outraged by the very fact of his appearance at such an event: “This is some kind of surrealism!”; "The boy became famous not for his work, but for his trashy popularity on social media."

Not such a long time ago, Milokhin himself could not imagine such popularity. Two years ago, he was working as a waiter in Anapa in southern Russia, shoplifting “for fun” and spending all his money on drugs. 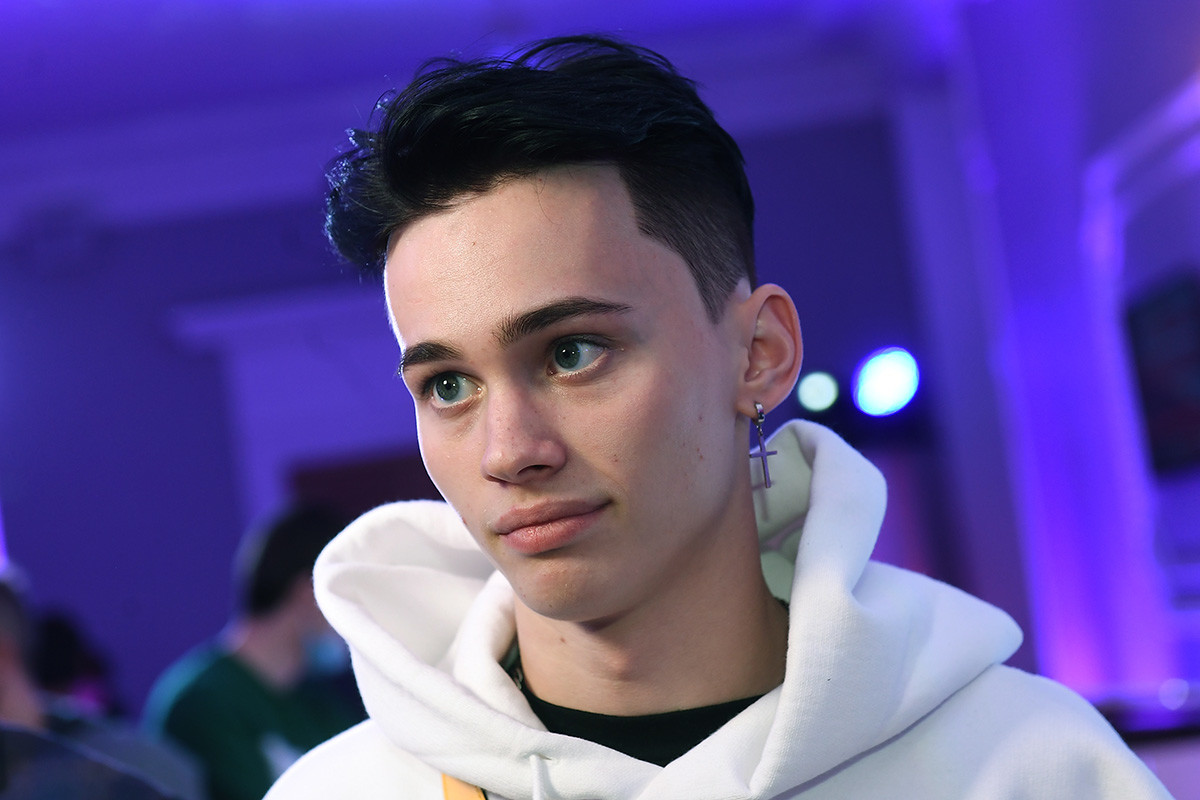 Between the ages of three and 13, Danya Milokhin lived in an orphanage in Orenburg, together with his brother Ilya. Their mother had brought them there after divorcing her husband because of his alcohol addiction and deciding that she would not be able to raise two children on her own. Danya does not like reminiscing about those 10 years of his life. Painful memories include beatings and not being allowed to eat outside meal times. “In the first days after I was taken from the orphanage, it was unusual not to be beaten for getting a poor grade at school. At the orphanage, everyone was beaten, that was part of the teaching process. They beat us in the face, slapped us. A teacher could take a stick or a skipping rope and lash you twice - so that it would not be very noticeable,” Danya recalled in an interview on the Pushka YouTube channel. 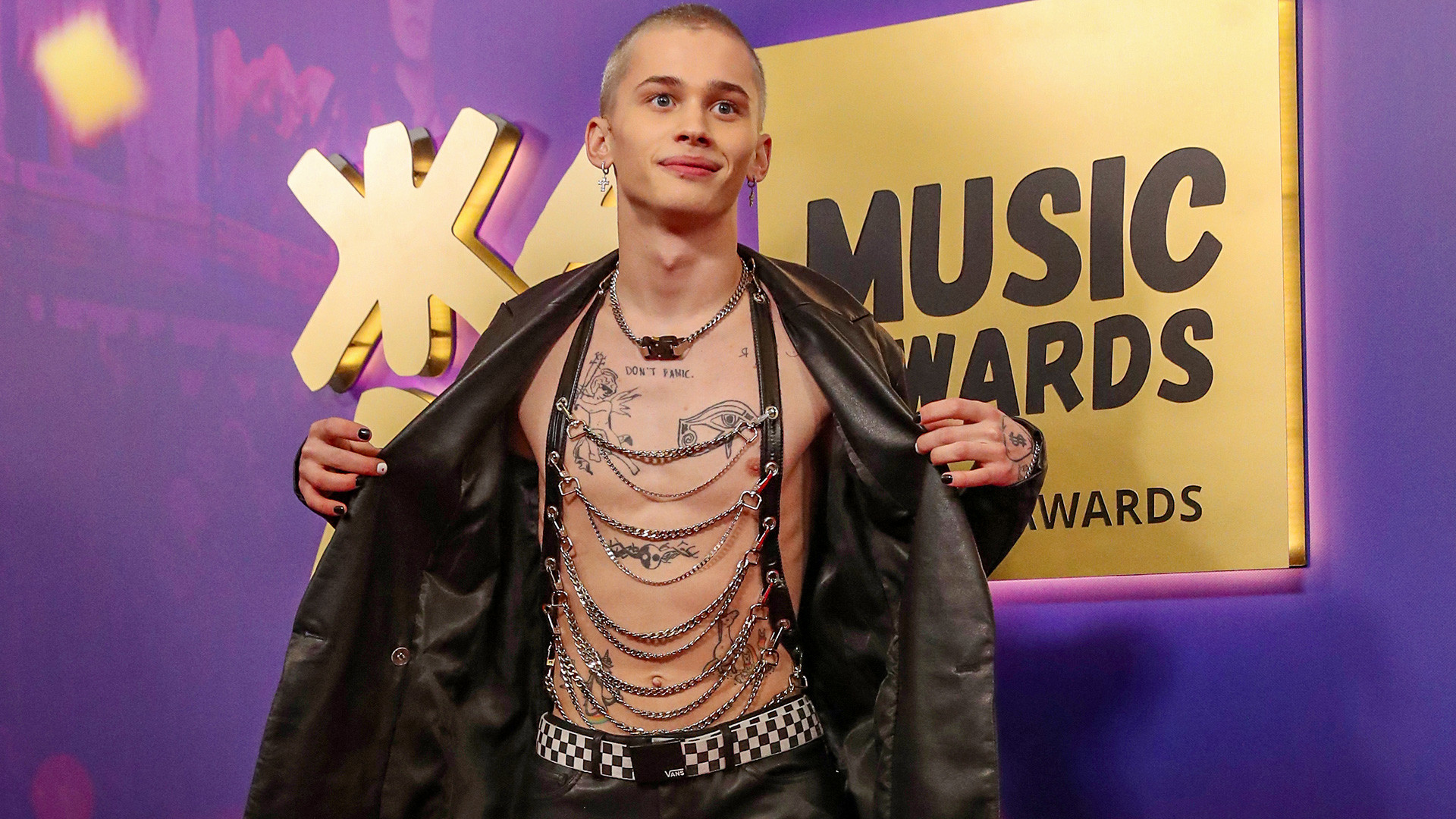 Entrepreneurs Dmitry and Yelena Tyulenev took custody of the Milokhin brothers. They already had five children of their own. The two brothers moved into their house near Orenburg and, a year later, the family moved to Anapa, closer to the sea. But things were not easy. Danya was a difficult teenager: he refused to go to school, began to drink and smoke and did not always come home at night. The Tyulenevs often received visits from the police. The main cause of conflicts was that Danya did not want to study.

“I didn’t want to do anything apart from making money online. They did not let me. And I didn’t want to study, it didn’t work.” Danya says that, by way of a compromise, he entered a technical college to train as a car mechanic and moved from the family home to a hall of residence. Away from his foster parents, he began to shoplift chocolate bars, chewing gum and other snacks from supermarkets for fun and when he was caught, he lied that he had nothing to eat. His foster parents did send him meat and cereals, but Danya was too lazy to cook.

At 16, he started using drugs and telling everyone that he would one day become a blogger. He set up an account on VKontakte and began posting everything: a photo from a supermarket where he is sitting in a trolley loaded with instant noodles, or a selfie with a naked torso. He got tattoos and dyed his hair blonde, seeking to attract followers with his appearance. By the age of 17, he garnered 2,000 subscribers and started an Instagram account, where “he began to cheat people for money: selling advertising and then not doing it and buying banned stuff [with the proceeds]”, he admitted. Later, in an interview, when asked “So it turns out that you deceived people just in order to have fun,” he replied: “So it does.”

In addition to his social media activity, Milokhin sold balloons, handed out leaflets, but did not stay anywhere for long, saying he “got bored”. In the summer of 2019, Dmitry Tyulenev arranged for him to get his first serious job, as a waiter in a cafe, but, two months later, Danya deliberately got fired. He wanted to spend more time with his friends. It was then that he set up a TikTok account, posting “everything that came to mind” there. His videos were a success with viewers: he grimaced at the camera, trolled other TikTok bloggers and lip-synced songs. 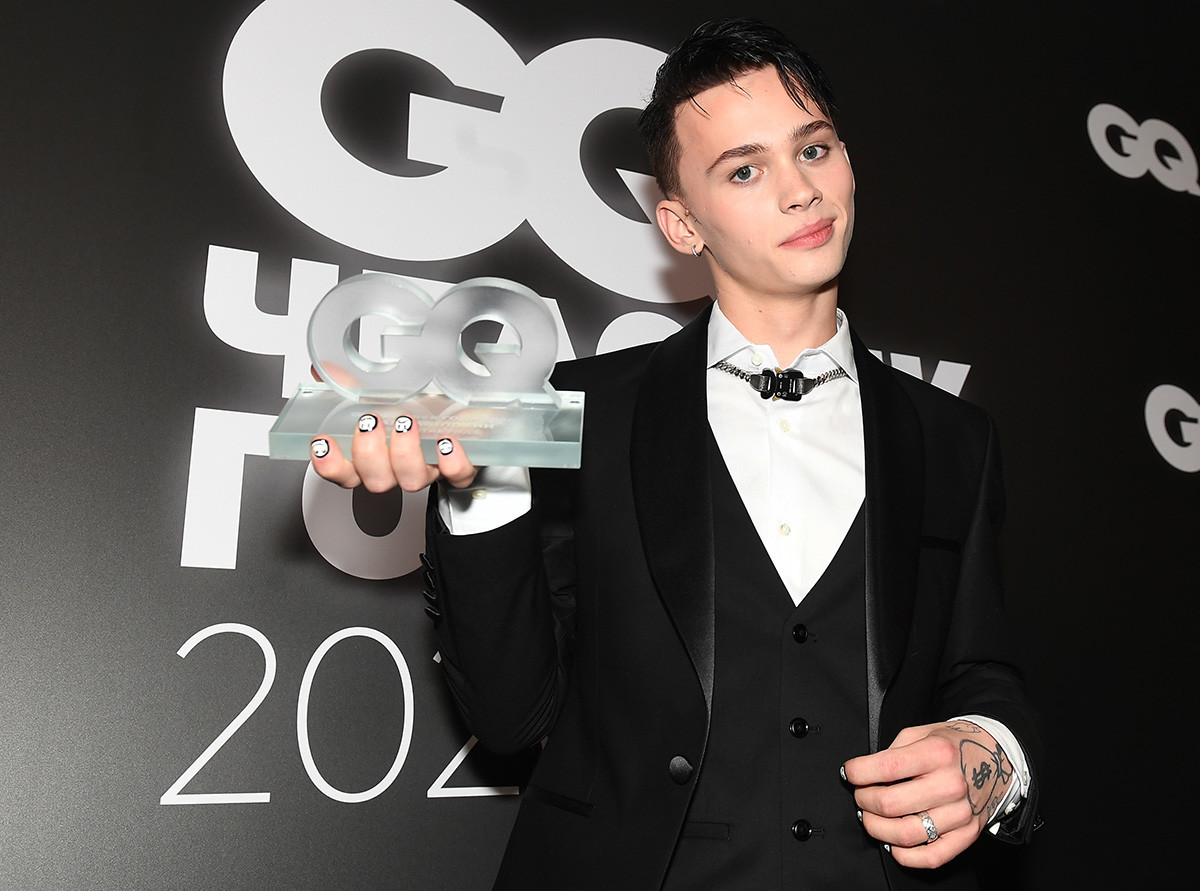 “My foster father told me a little secret: thoughts are material. I believed it. So, every evening, I would write on a piece of paper: I am the most popular boy in the world, I am the most beautiful, people like me, I have a lot of friends,” Danya says. His dream was to move to Moscow. As soon as he came of age, he received the 200,000 rubles (approx. $2,800) from the state that orphans are entitled to, spent the money on a new phone and a ticket to Moscow and cut off all ties with his family, including his brother Ilya.

“I put everything on the line. Either it would work out, or, no matter how it may sound, there was no point in living,” Milokhin says today about his move. It did work out, as users liked his approach to content. By December 2019, he already had 700,000 followers on TikTok and 150,000 on Instagram. His popularity was further spurred by a frank video interview, in which he talked about his troubled childhood and which was viewed more than 6 million times, as well as by his flirting with the topic of bisexuality (Danya says he is heterosexual, but the image of having alleged relationships with other men is drawing additional attention to him). “I have a crush on you,” teenagers, both girls and boys, write to him in comments. 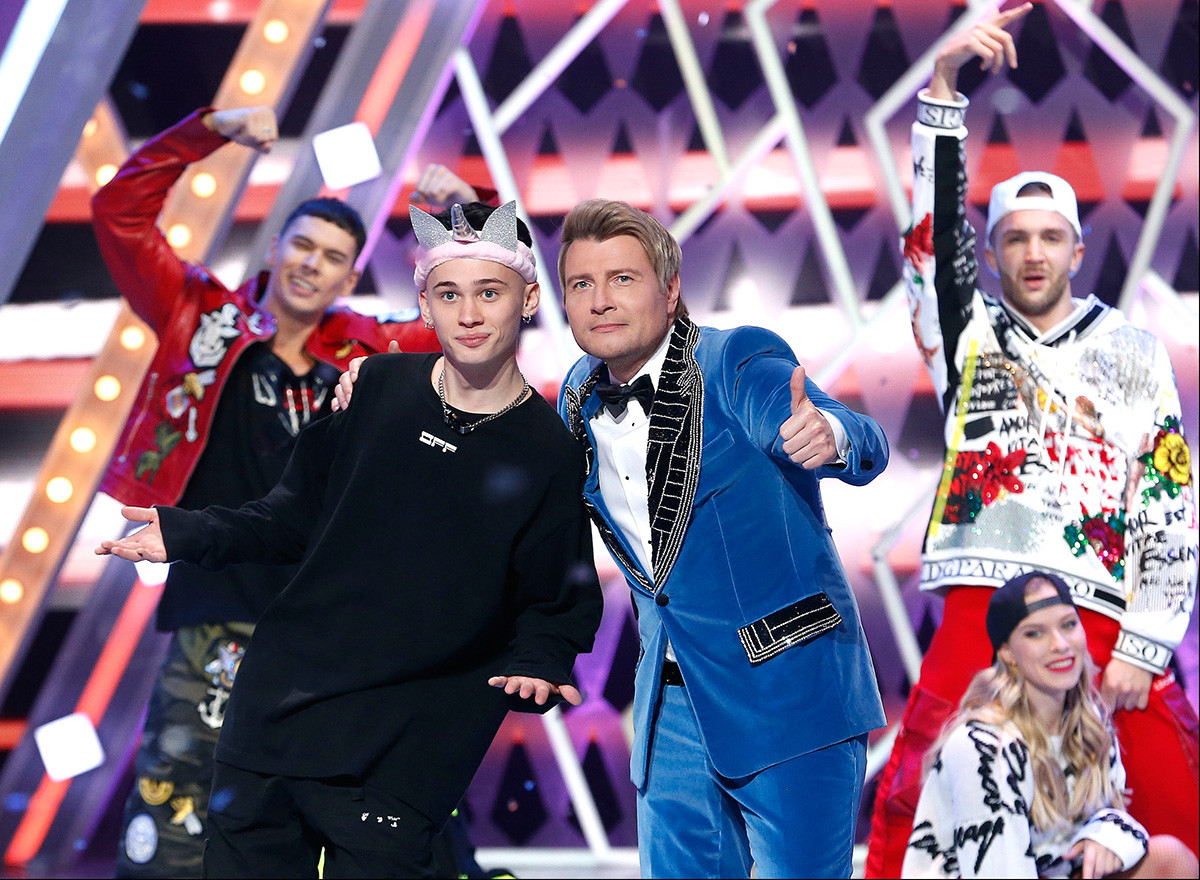 Then Milokhin got an invitation from Yaroslav Andreyev, the founder of the WildJam advertising agency, which specializes in working with bloggers. He was invited to join Russia’s first collective of TikTok content creators, Dream House, an equivalent of the Hype House project in the USA. In it, several TikTok influences live together, film content for their own accounts and for the “house” account, which boosts their audience figures. Danya, together with another partner, were in charge of selecting residents for the house and creating content. At first, Andreyev admitted, he expected the project to be loss-making for a year, however, it started to generate a profit in six months’ time.

In 2020, during Russia’s two-month lockdown, Milokhin came up with the idea of recording a humorous track titled: ‘I’m at home’. Its lines: “Guess where I am? I’m at home” referred to the self-isolation regime imposed due to the coronavirus pandemic. The song was written in a day and a short excerpt from it went viral, as users ended up recording 1.3 million TikTok videos with it. Milokhin took the next step and released a video of the song, which currently has more than 28 million views on YouTube.

By that time, Milokhin says, he had already given up drugs: “I had an overdose. After that, I could not sleep normally, the sound ‘mmm’ kept playing in my head all the time. I completely lost it. It scared me.”

“You do realize that with your reputation as a drug addict, big brands will not touch you,” he was asked in the same interview on the Pushka channel. “So what? If some don’t want to touch me, others will,” he replied and soon proved to be right. After the success of his music video, he was approached by large advertisers, including PepsiCo, Honor, Huawei and other major brands. He has also become one of the faces of Sber.

“It is not at all surprising that they need an influencer like Danya Milokhin. He does not add anything special to the giant’s brand as such. But Sber is thus sending a message: look, everyone is with us, teenagers and elderly women alike, we are everywhere, we are for everyone,” says Anton Bulanov, an expert with the Competence Development Centre for Marketing at the Higher School of Economics.

Milokhin too believes that having a multi-million audience behind him, he can fit into any context and any business. Now he is developing a musical career, at the same time openly saying that to become a singer, one does not need to be able to sing. “What for? I want to sing, but I’m too lazy to spend time learning how to do it. With Auto-Tune, you can tweak anything.”

He describes himself as follows: “I am not a professional in anything - except for character. I’m a professional in character.” Recently Milokhin, at the age of 19, bought a Maybach for 10 million rubles (approx. $137,000) and released 21 tracks - solo and collaborations with famous hip-hop performers and bloggers.