These Russians pave the way for electric cars despite the odds 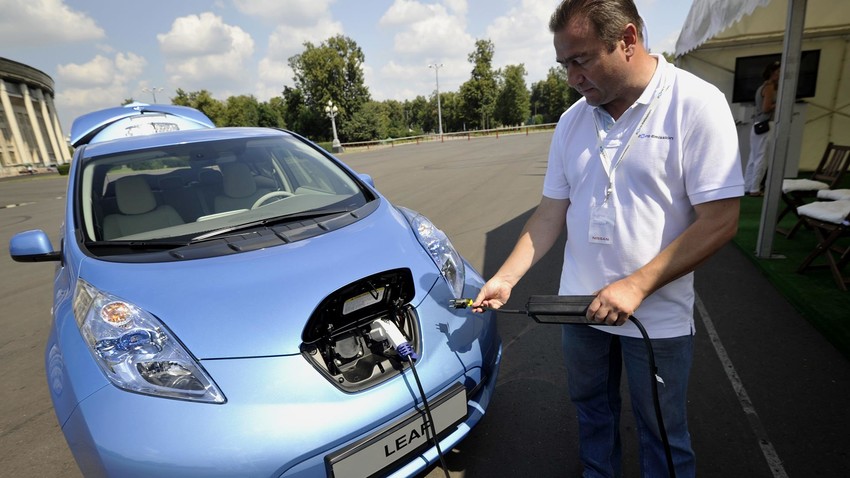 Mikhail Fomichev/TASS
Nissan Leaf is the most popular e-car in the country while there are some Tesla cars around, too.

When Denis from Kemerovo bought a Nissan Leaf, he had to collect neighbors’ votes and then go through a myriad of bureaucratic procedures to receive permission to equip his apartment complex with a charger for his electric car.

Despite growing in numbers, electric cars still make a tiny fracture of all the cars in Russia. But some drivers defy the odds by choosing e-cars in the country where long distances and severe winters define the roads.

A drop in the ocean

Despite a recent spike in numbers in 2021, electric cars are still a rare sight on roads in Russia. At the beginning of 2021, only 10,800 electric cars were registered in Russia. 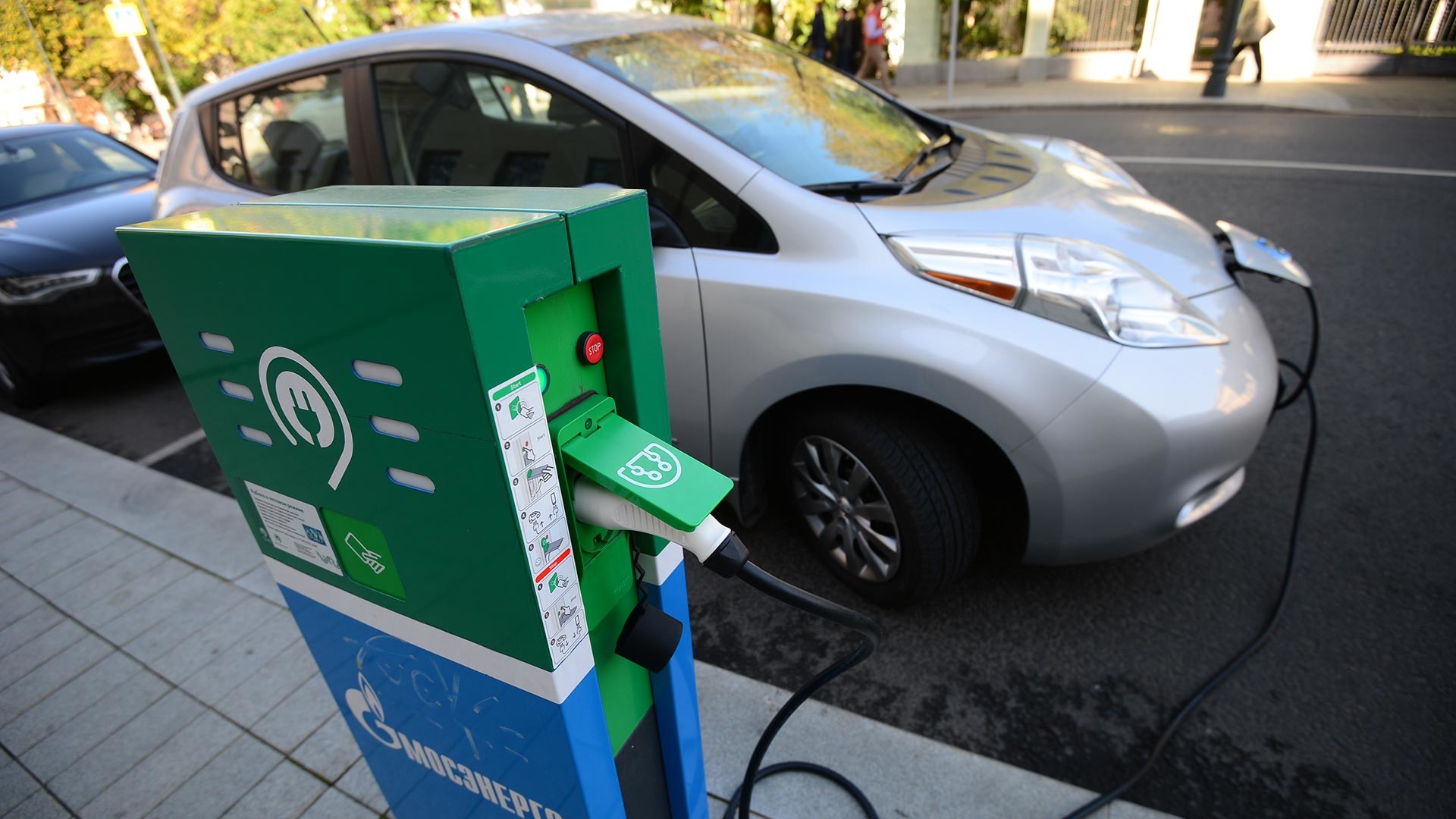 Compared with 2020, the number of electric cars grew by 71 percent. Yet 10,800 seems laughable, considering that the number of passenger motor cars in the country in 2021 amounted to 45 million.

Curiously, 97 percent of all the electric cars in Russia — mostly Nissan Leafs — are right-hand drive systems, despite Russia officially using left-hand systems. And most of those cars are registered in Russia’s Far East. There are a few people who believe, though, that electricity is the future.

A Tesla in Siberia

Blogger Kirill Petrov defines himself as “the biggest fan of [Elon Musk] in the Russian Federation” He owns a few Tesla cars and regularly uploads video reviews on his YouTube channel (link in Russian). Originally from Novokuznetsk, Siberia, Petrov is also an expert on driving electric cars — specifically Tesla — in subzero temperatures. 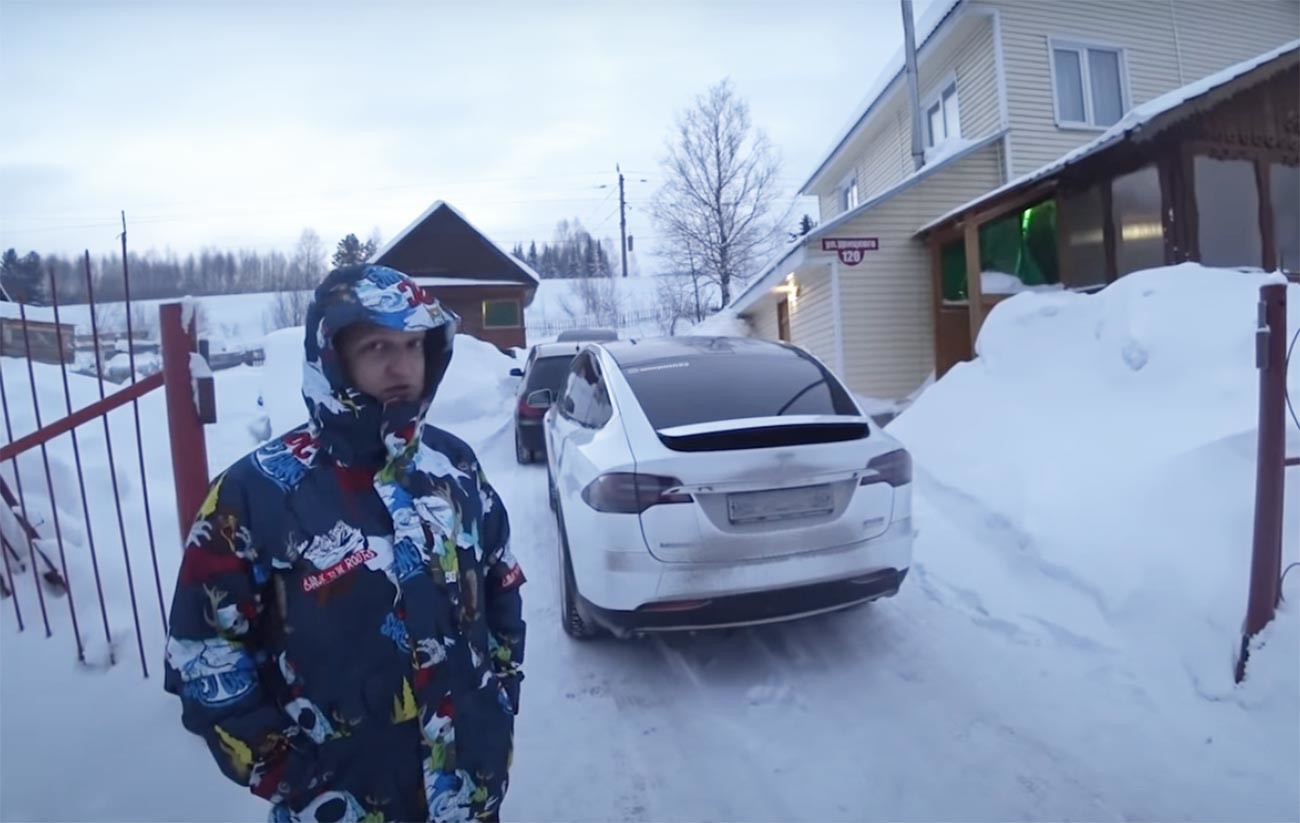 “Elon Musk certainly did not prepare this car for this,” said Petrov while he took his Tesla for a 170-kilometer-drive from Novokuznetsk to Siberian ski resort Sheregesh in harsh winter conditions.

In spite of the car consuming twice the usual amount of battery power, the blogger and his crew arrived in the ski resort without major problems, not counting one time when the car’s front door refused to open as it froze. 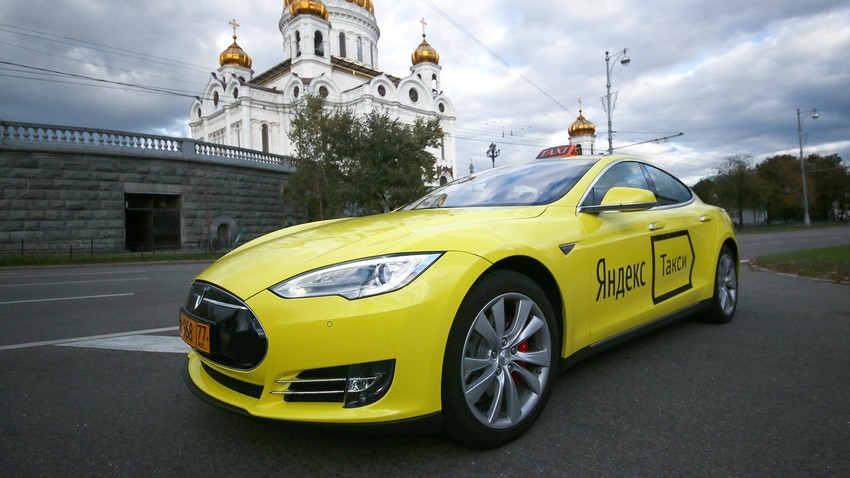 Given severe conditions of -25°C degrees, the car calculated it would have enough power to drive back to Novokuznetsk in 24+ hours. Despite these small adventures, Petrov’s review was positive, as it actually proved the car is reliable enough even in harsh Siberian winters.

In contrast to Russia’s Far East — where the Nissan Leaf makes up a majority of electric cars — the pioneers of electric vehicles in Moscow are, mostly, people of power and wealth. 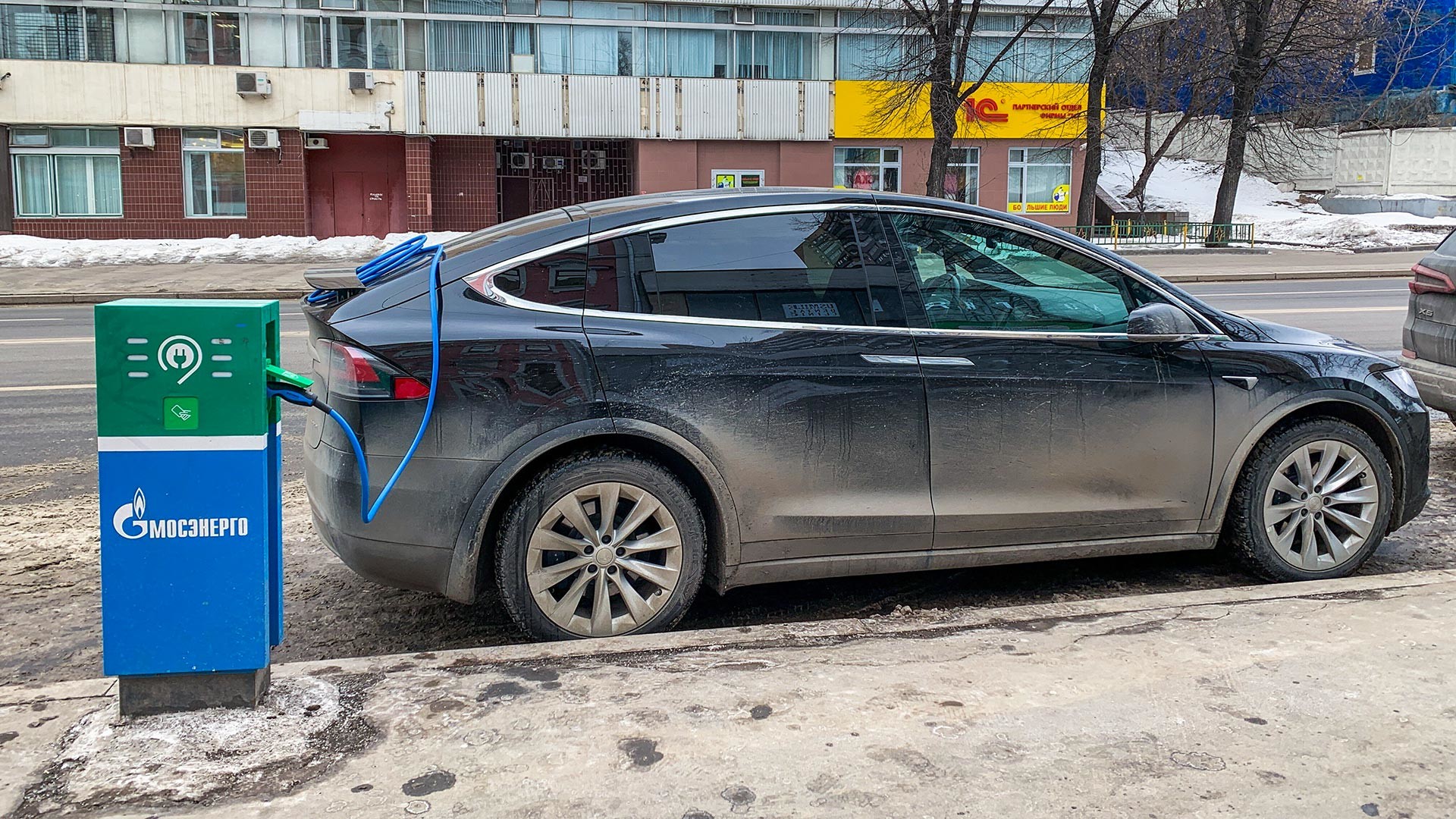 Russian oligarch Roman Abramovich reportedly brought 20 Tesla cars to Russia to distribute among his “confidants and partners”, in order to spread knowledge about the benefits of electric cars in the country where it retains a status of a suspicious novelty (link in Russian).

One of the people who received a Tesla from the oligarch, according to reports in mass media, was Anton Belov (link in Russian).

“It seems to me that Tesla creates a positive image for its owner: [people] look at me as if I was some kind alien [who came] from the future. I think, gradually, the whole world will switch to electric cars and hydrogen cars. And our country will, too,” said Belov in one of his interviews (link in Russian). 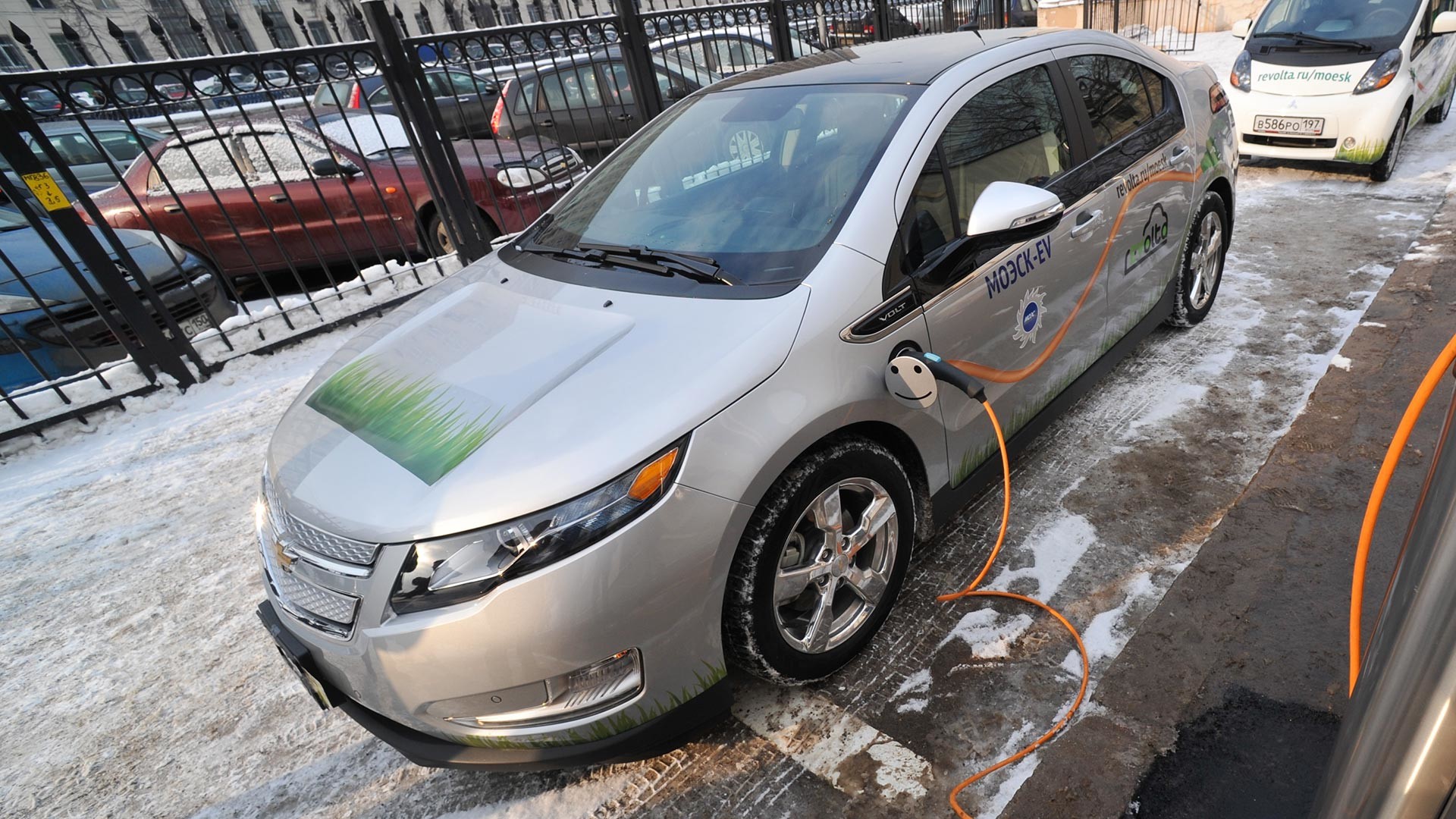 Maxim Spasenenko, another owner of a Tesla car in Moscow and a co-founder of a local Tesla-rental business, shares Belov’s view on the superiority of electric cars compared to conventional vehicles in Russia.

“Tesla is a car for a city. Although long-distance journeys are possible, it is not 100 percent comfortable here in Russia [to drive Tesla on prolonged rides] because, compared to the U.S., the [complementary] infrastructure is not as developed yet. But it’s a fine car for driving inside a city,” says Spasenenko.

“[In Moscow] there are enough charging stations. But, if the government wants to popularise electric cars in Russia, they need to develop infrastructure. If the infrastructure won’t develop, electric cars will only belong to people who live in private houses or own private parking spaces and, also, to those who idealize Elon Musk. The rest will feel as if [owning an electric car] is not a comfortable experience,” he added.

Click here to find out why the Russian youth turn Lada into a cult.