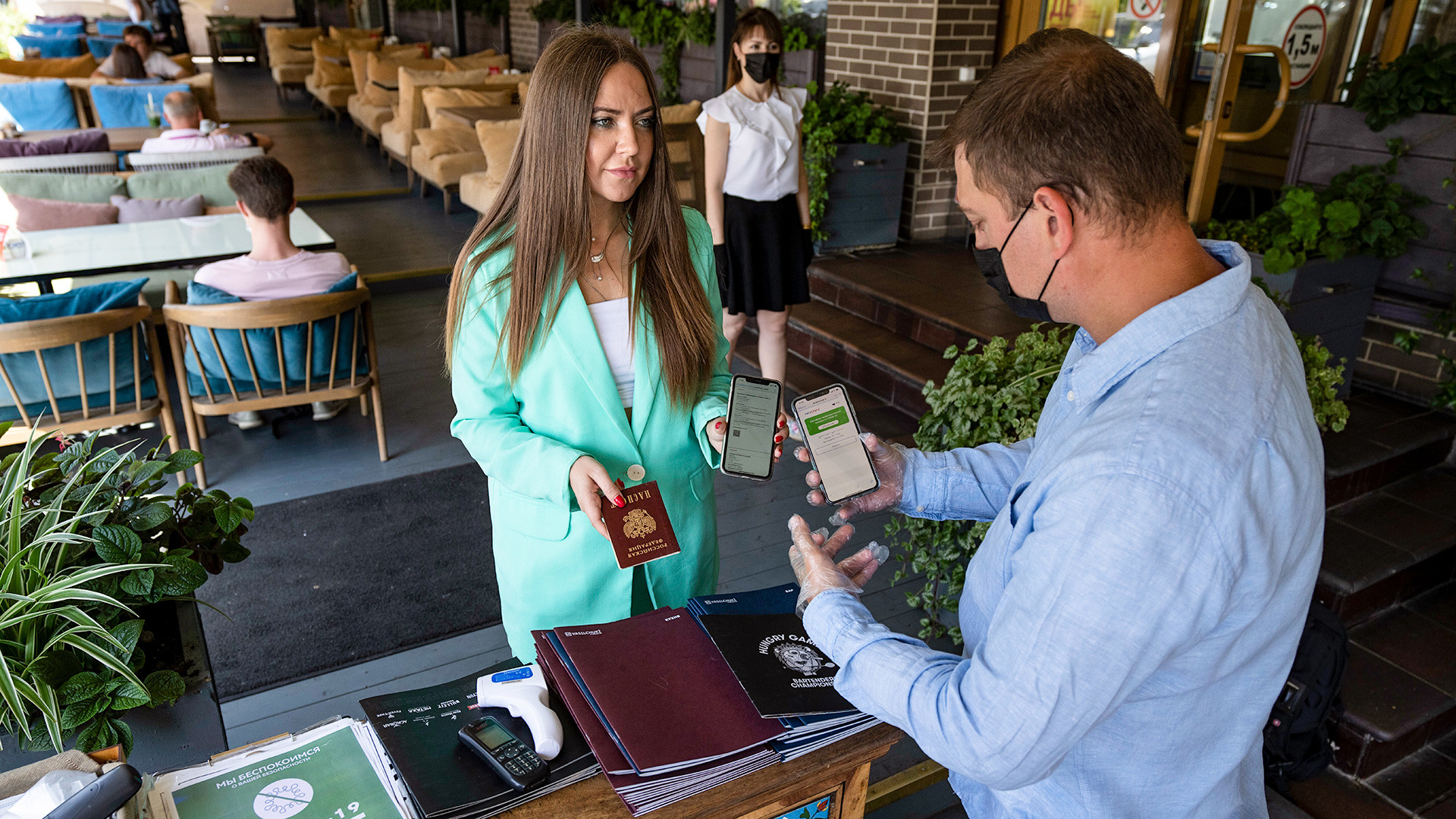 A restaurant employee checks a visitor's COVID-19 vaccination QR code at the entrance of a restaurant in Moscow, Russia, Tuesday, June 22, 2021. As proof of vaccination for entering a restaurant, customers must visit a government website and get a QR code.

AP
With warnings of a new COVID-19 wave, authorities have passed a new law banning entrance into cafes and restaurants without a negative PCR test or QR code confirming vaccination as of June 28, 2021. The rules apply to both Russians and foreigners.

On June 22, Moscow Mayor Sergey Sobyanin enacted the new restrictions, which came into effect on June 28, and affect Moscow bars, clubs, cafes and restaurants. Only those who tested negative and/or possess proof of vaccination in the form of a QR code will be allowed to enter. The category, however, also includes people who contracted the coronavirus over the last six months. The PCR tests are valid for a period of three days. 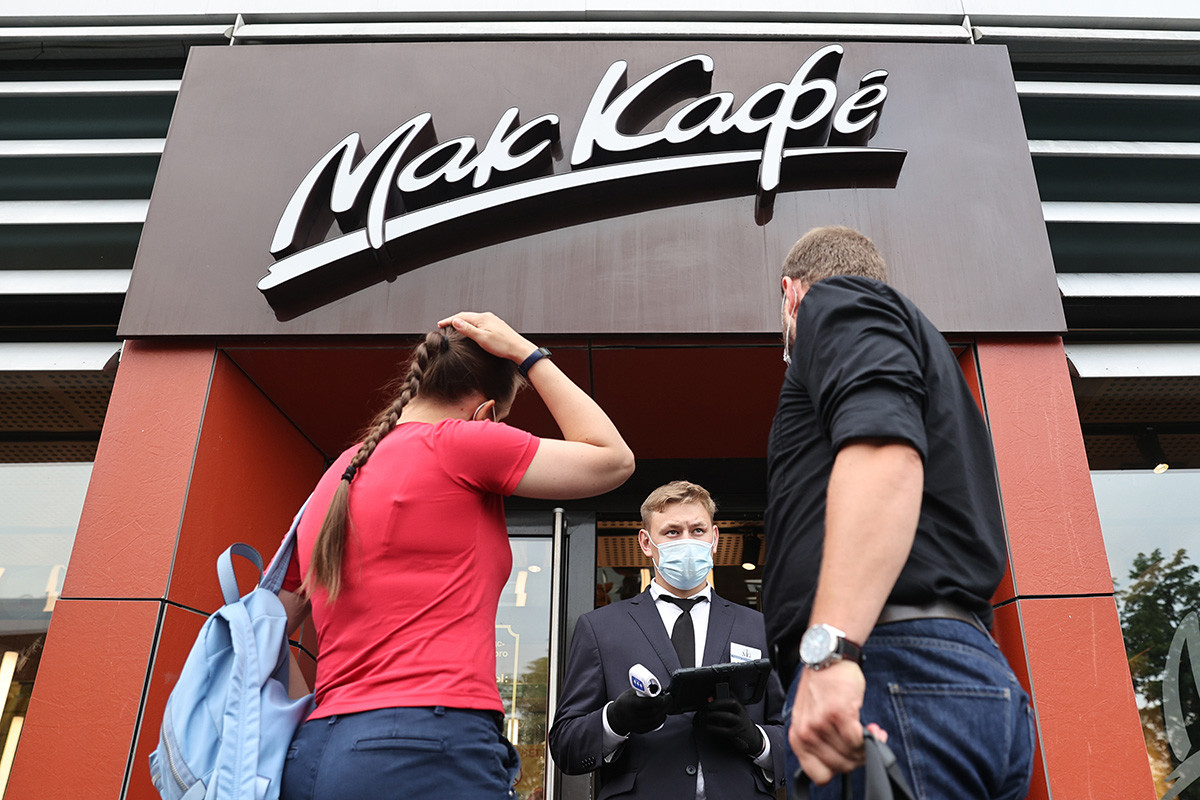 People wait outside a McDonald's fast food restaurant in Bolshaya Bronnaya Street, central Moscow. As of June 28, 2021, McDonald's introduces a contactless system for takeaway orders and starts serving customers who have a QR-code.

People with QR codes will be scanned at the entrance. The codes will be available to those who already had the coronavirus or have received their second shot. They can be found on the Moscow municipal services website.

Exceptions are made for establishments that deliver takeout and cafes with summer verandas, where no QR codes will be required until July 11.

Russia’s coronavirus headquarters added that foreigners can get PCR tests done at any official laboratory in Russia’s EMIAS system. The list of labs can be found here. Upon receiving a negative result, a form will have to be filled out to receive the QR code. The code will be active for a period of 72 hours from the time the lab enters the negative result into its database. Those who’ve already had the virus, or have received both of their vaccine components (in Russia), can also apply for a QR code using the same form. 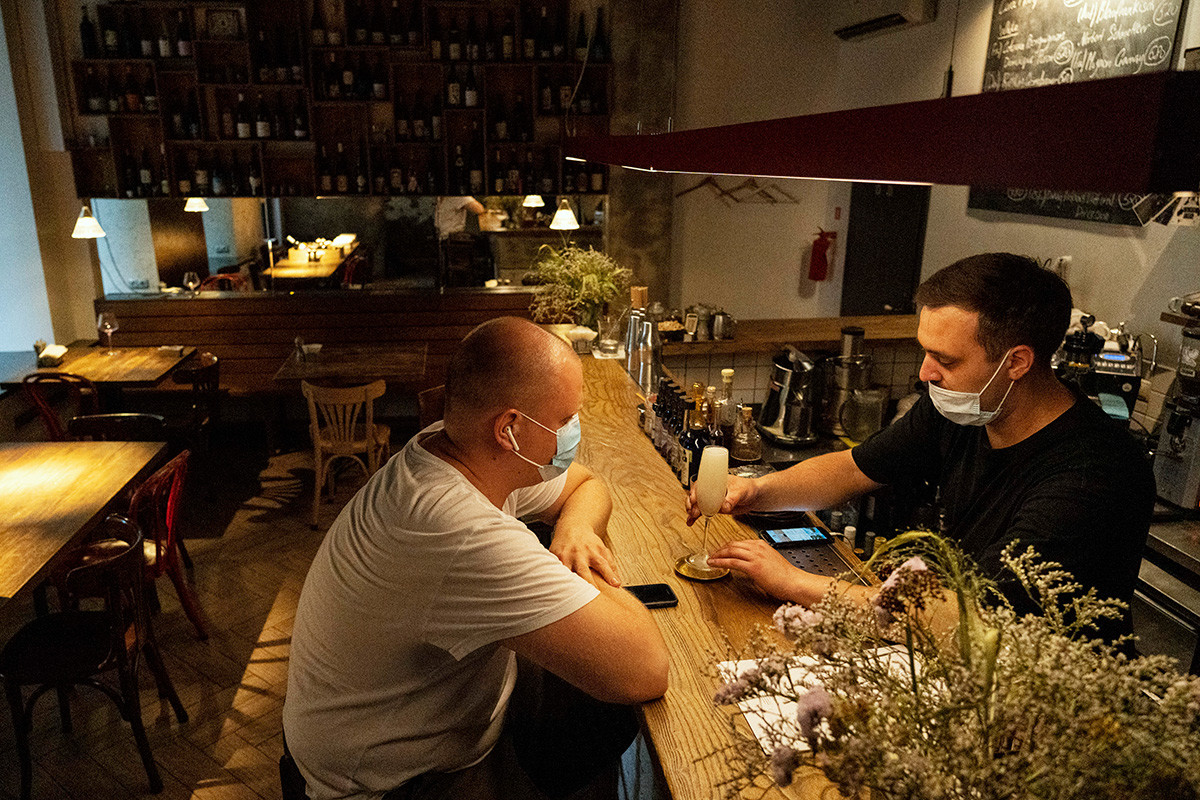 The first day the measures were enacted wasn’t a pretty sight: restaurants and cafes were all empty, for the most part. The following photos from people wielding QR codes tell a story.

“Entered Starbucks. Had my QR code scanned and cross-checked with my passport,” writes @velvetisblack.

“Sitting all alone at a Burger King in Kosino… the staff is laughing and saying I’m only the tenth customer they’ve had all day with a QR code,” @martin_camera says.

Some establishments saw massive queues, with people waiting for takeout. Starbucks among them.

Customers have been complaining that McDonald’s didn’t sort out its QR code system in time for the June 28 measures. The chain only offered takeaway that day.

Those who didn’t feel like queuing opted for the summer verandas.

Some Moscow cafes and eateries ignored the ban, continuing to let in customers without QR codes, according to the BBC and Muscovites themselves.

“Popped into the ‘Rossiyanka’ eatery next to my office in downtown Moscow. They let me in with a mask, didn’t check my temperature, didn’t ask for any codes,” Aleksandr Rubtsov told Russia Beyond.

On June 28, the first day of the regulations, restaurant profits fell by 80 percent compared to the previous week on Monday, according to Moscow restaurant business minister, Sergey Mironov. He added that if the measures continue, 70 percent of the eateries and cafes that don’t do home deliveries might go out of business.