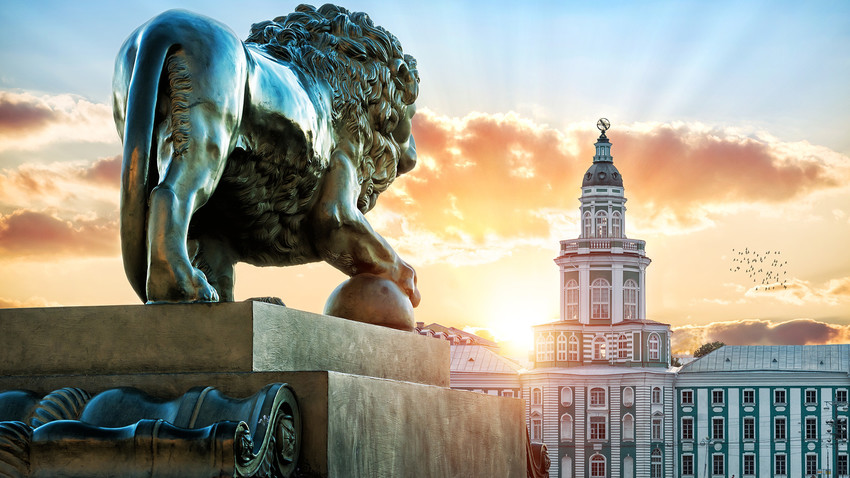 yulenochekk/Getty Images
These places of Russia’s northern capital will surely give you goosebumps. 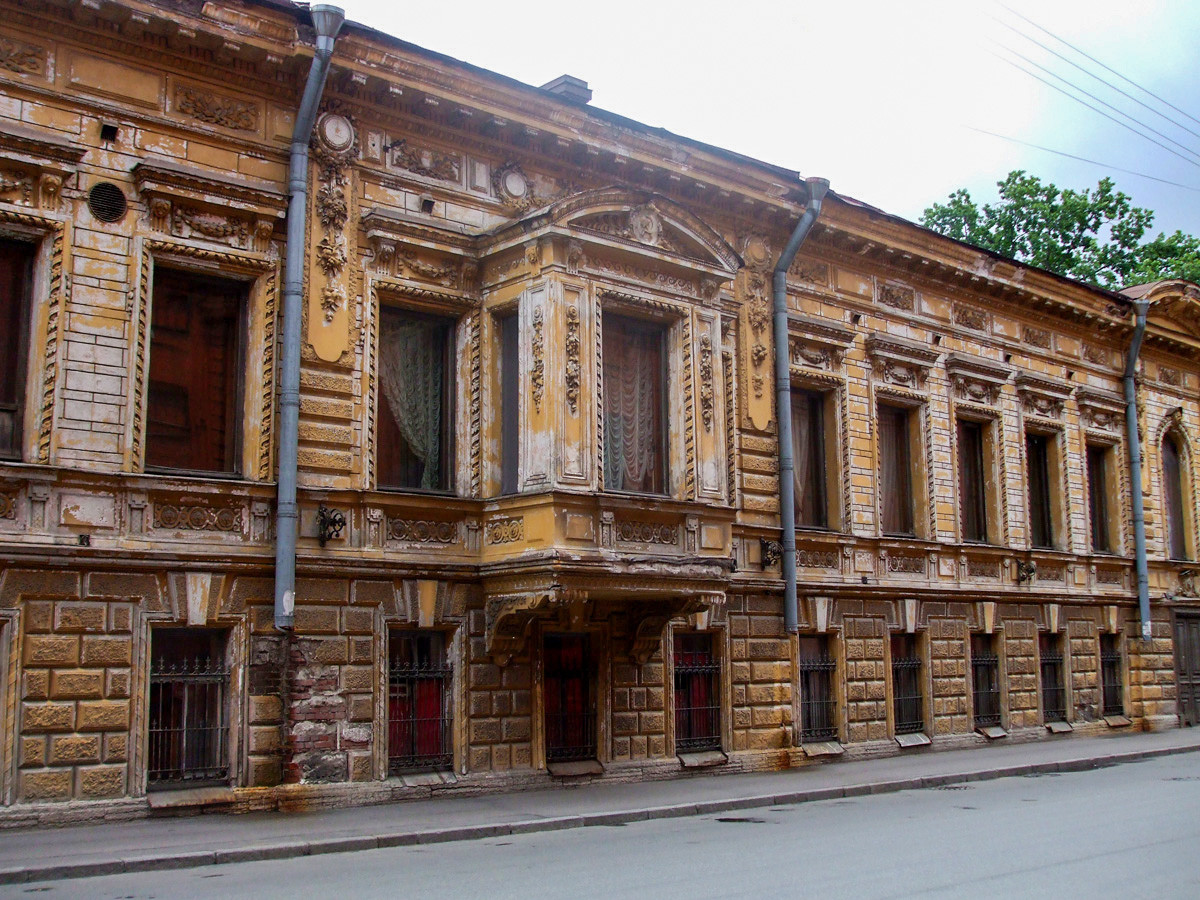 This old mansion on the outskirts of St. Petersburg belonged to a rich merchant family who owned a factory and made millions producing leather products before the Russian Revolution broke out in 1917.

The owners of the mansion invested a lot of money into its decoration. An exquisite chandelier, a giant fireplace, walls made in natural silk and stucco work that looks sinister at times graces the mansion’s many halls.

A city legend has it that the head of the family ordered a mirror from Italy to decorate a spacious dance hall inside the mansion. Allegedly, this was the exact mirror that had previously hung in Count Dracula’s castle.

In spite of Dracula being a fictional character, numerous people recounted strange incidents related to those who looked in the mirror. Reportedly, these unfortunate people became sick, died, or even vanished without a trace.

It’s not known what happened to the cursed mirror after the Bolsheviks expropriated the mansion from the family. One version of the legend has it that the mirror was hidden in a secret chamber inside the mansion and could eventually resurface. 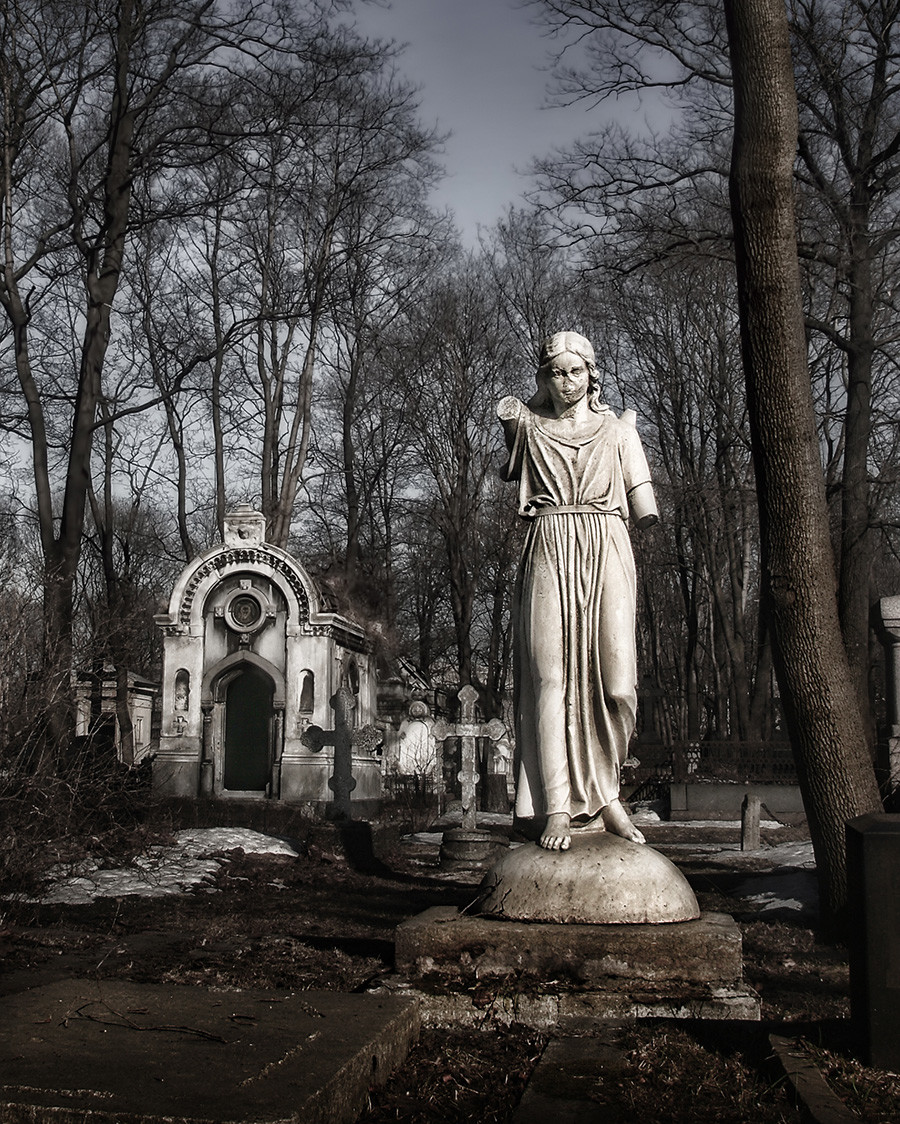 This St. Petersburg cemetery is sometimes referred to as the Russian ‘Père Lachaise’ for the abundance of unusual crypts that have survived from the past centuries. Many notable scientists, artists and statesmen found their final resting place here.

After the 1917 Revolution, some of these crypts were desecrated by grave robbers, who hunted valuables many of the notable deceased were buried with. Disturbed graves amid majestic tombstones and aged crypts may easily spook a susceptible visitor. 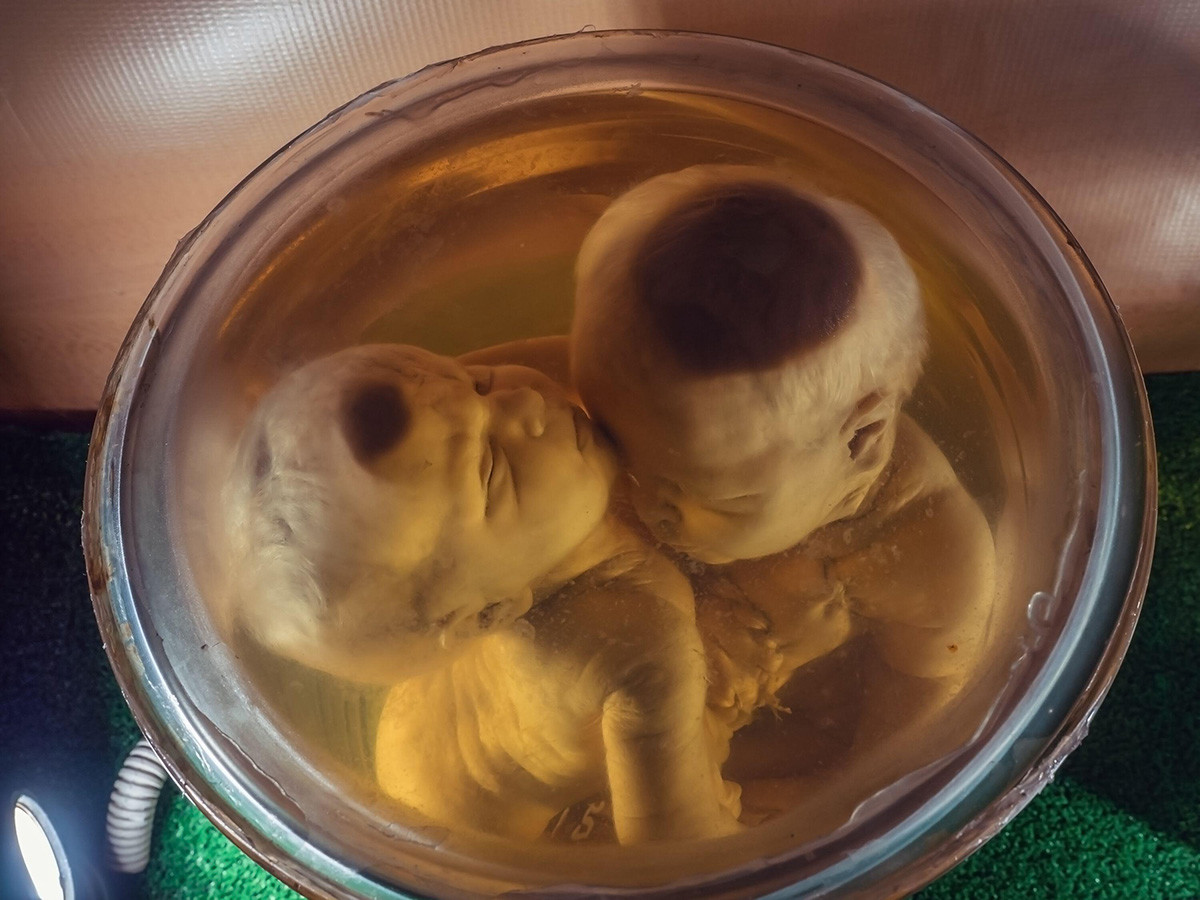 Peter the Great gave birth to the first museum in Russia by putting on display a bunch of rare things he owned. Since its launch in 1727, the Kunstkamera — which means the Cabinet of Curiosities — grew significantly.

Perhaps, the museum is most famous for its collection of repulsive oddities, like a skeleton of a two-headed child, siamese twins, two-headed calf, etc. all preserved in glass jars. 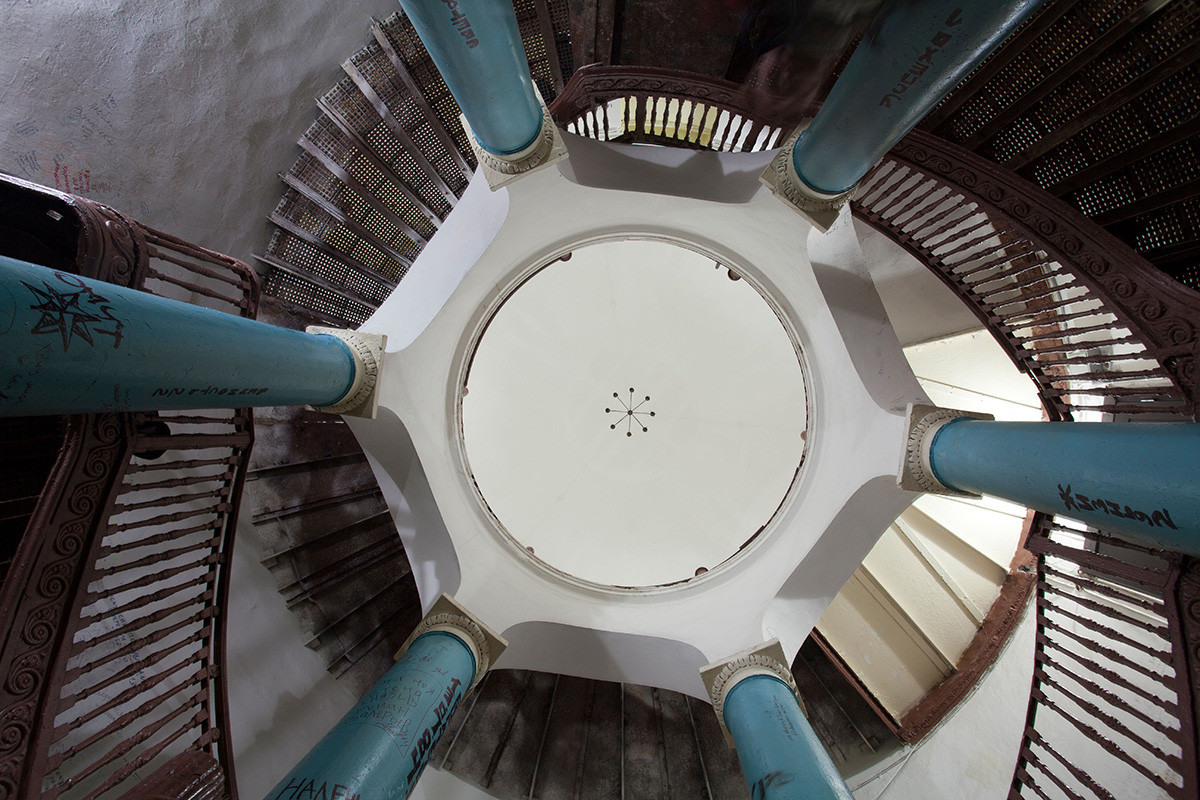 This building became popular with various informal cultural movements of the Soviet youth in the 1970s and 1980s. The rotunda is also famous for its unique acoustics: people say even the quietest of sounds will not go unnoticed inside despite, curiously, the total absence of any echo.

The rotunda is regularly cited as one of the most mysterious places in Russia’s northern capital, as it reportedly was the place where freemasons hosted their elaborate secret ceremonies in the 18th century. Today, city residents credit the rotunda with mystic qualities of its own. One city legend has it that there was a person who entered a disappearing door, which revealed itself for a brief moment and returned as a fragile old man despite being absent for only a few minutes. 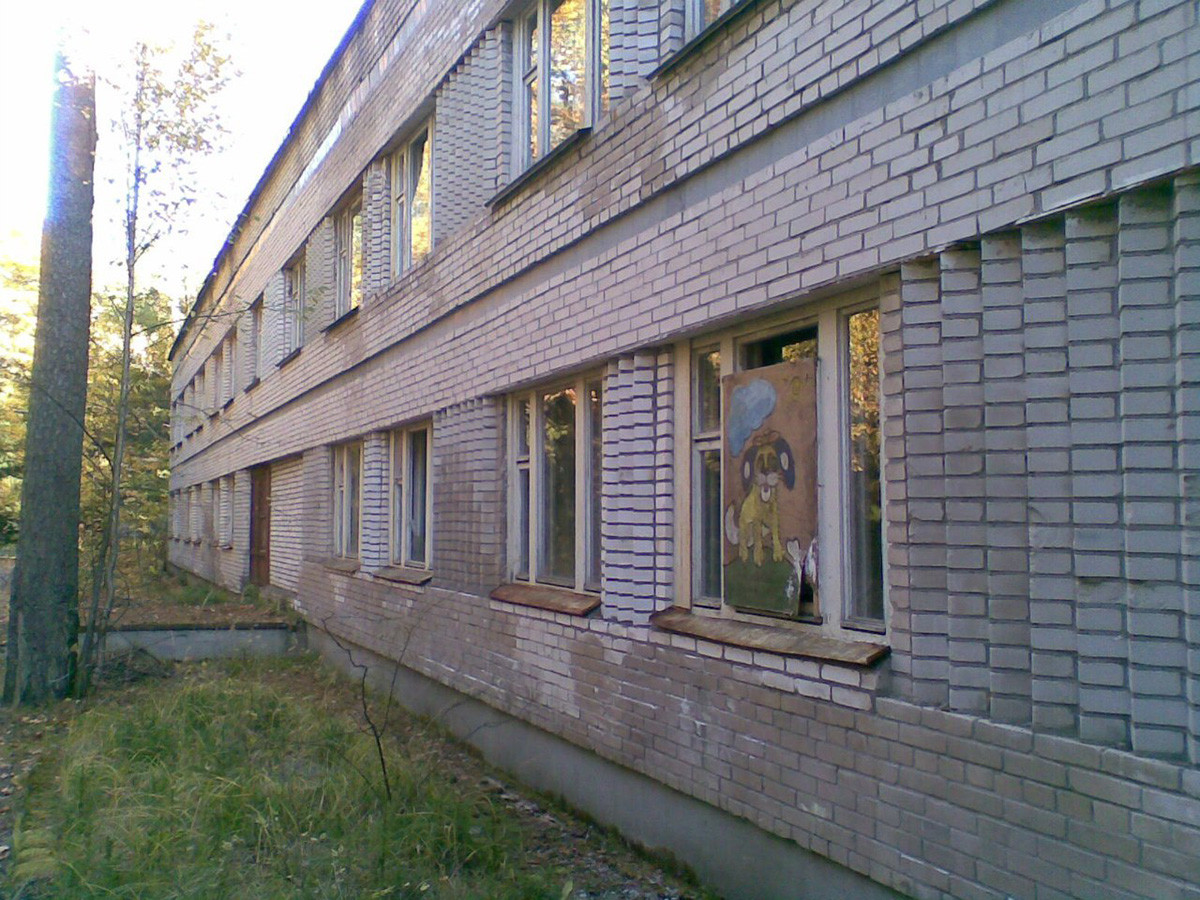 In the Soviet times, when the camp was not yet abandoned, there was one block that was the least popular among the pioneers who stayed in the camp. The reason nobody wanted a room there was a pump house standing nearby.

A legend has it that during World War II, the Nazi soldiers killed a young woman inside the pump house where they had erected gallows. After the war was over and pioneers flooded the camp, which was believed to be the site of the terrible crime, visitors reported seeing the abandoned water pump being lit with light at night. Strange sinister voices were also heard by those staying up late at night.

After the Soviet Union collapsed, the ‘Swallow’ (Lastochka) camp became abandoned and the territory was reportedly sold to real estate developers. Perhaps, the owners of new apartments which could be built on the spooky site will also report strange things happening in the vicinity. Only time will tell!