If Russia is so big, why doesn’t everyone live in a huge house with a garden? 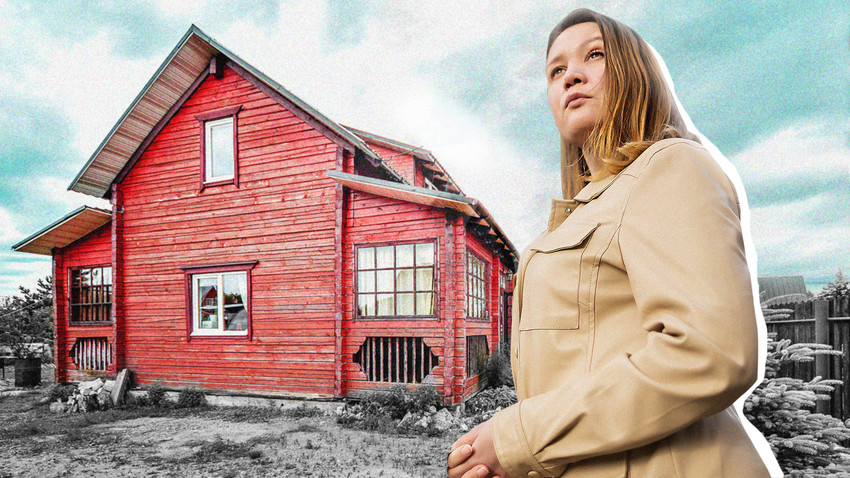 Kira Lisitskaya (Photo: Legion Media)
Russians dream of having their own private house, but despite living in (by far) the world’s largest country by area, they still squash together sardine-style. Why?

“Fresh air and breakfast on the veranda, the option to go straight from the computer to the garden, your own yard where the children play, no imposing fences,” Diana Laretskaya, an image coach from Moscow, lists the advantages of having her own home.

A couple of years after getting married, the family faced the question of where to move: to a house or an apartment. She chose a townhouse, about 300 square meters in area, 15 km from the Moscow Ring Road. The road to the city takes 15 minutes, and then there are the usual Moscow traffic jams. “I plan my week as follows: several days of home working on my computer and phone, a couple of days in Moscow. I make several appointments in a row. Shopping days are scheduled. After all, any unplanned meetings during busy hours means sitting in traffic.” 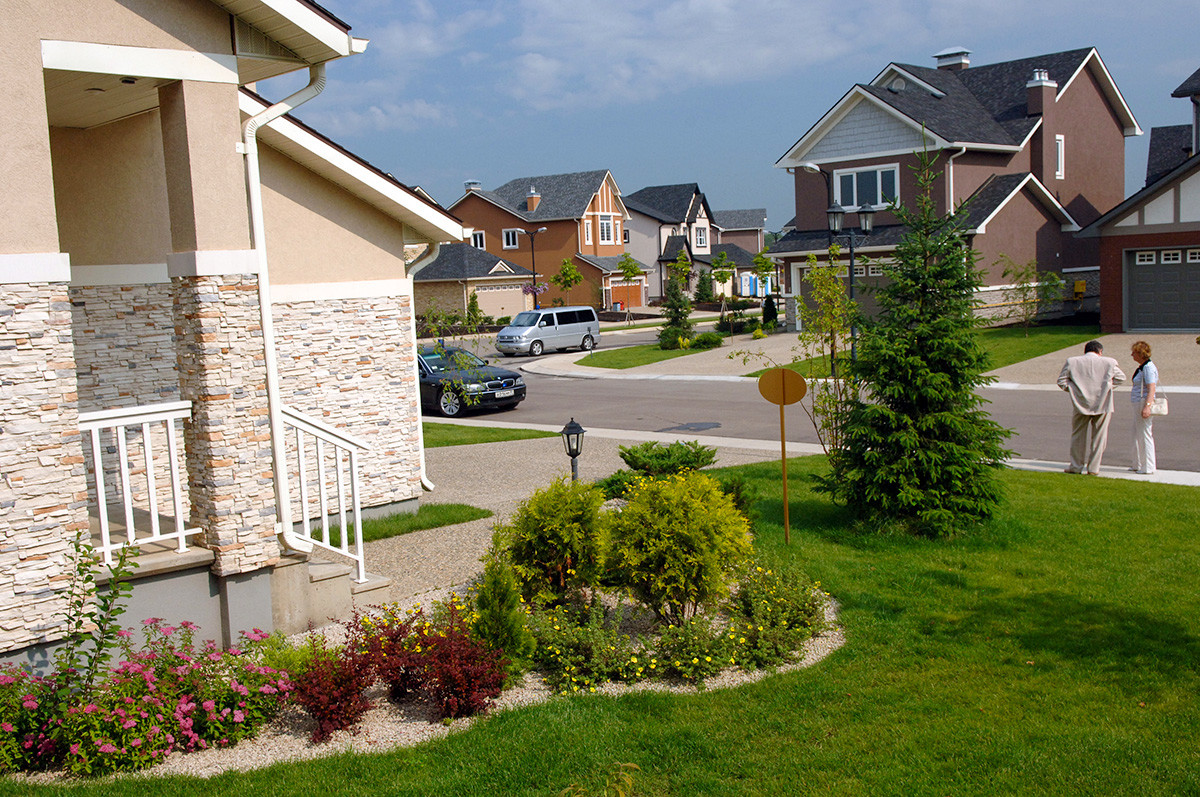 Roman Alekhin, an entrepreneur, also bought himself a house: “When I was buying the property, I thought every evening I’d spend by the fireplace or on the riverside. But everything turned out differently.”

Ask Russians where they would prefer to live — in an apartment block or a private house — almost 70 percent say the latter. No one pictures their dream home in the form of a high-rise building surrounded by neighbors on all sides, with a common stairwell and strict noise rules. So why don’t Russians utilize more of the vast emptiness of their country? Less than a third of the population live in their own houses. And that’s despite the availability of sweeping tracts of relatively inexpensive land.

Studies show that the idea of living in one’s own home is very popular among urban residents in Russia. “I’d even say it’s a dream. But a house with all amenities and utilities is, first, expensive, and, second, a bureaucratic nightmare,” Mikhail Alekseevsky, head of the Center for Urban Anthropology at Strelka KB, a consultancy firm, told Russia Beyond.

More often than not, the house owner is the one responsible for garbage collection, lawn mowing, pool cleaning, pest control and other maintenance services, or pays a fee to a management company. Often, ready-made houses are sold on the market without being hooked up to utilities and without infrastructure: owners themselves have to sort out gas, electricity and water supplies. 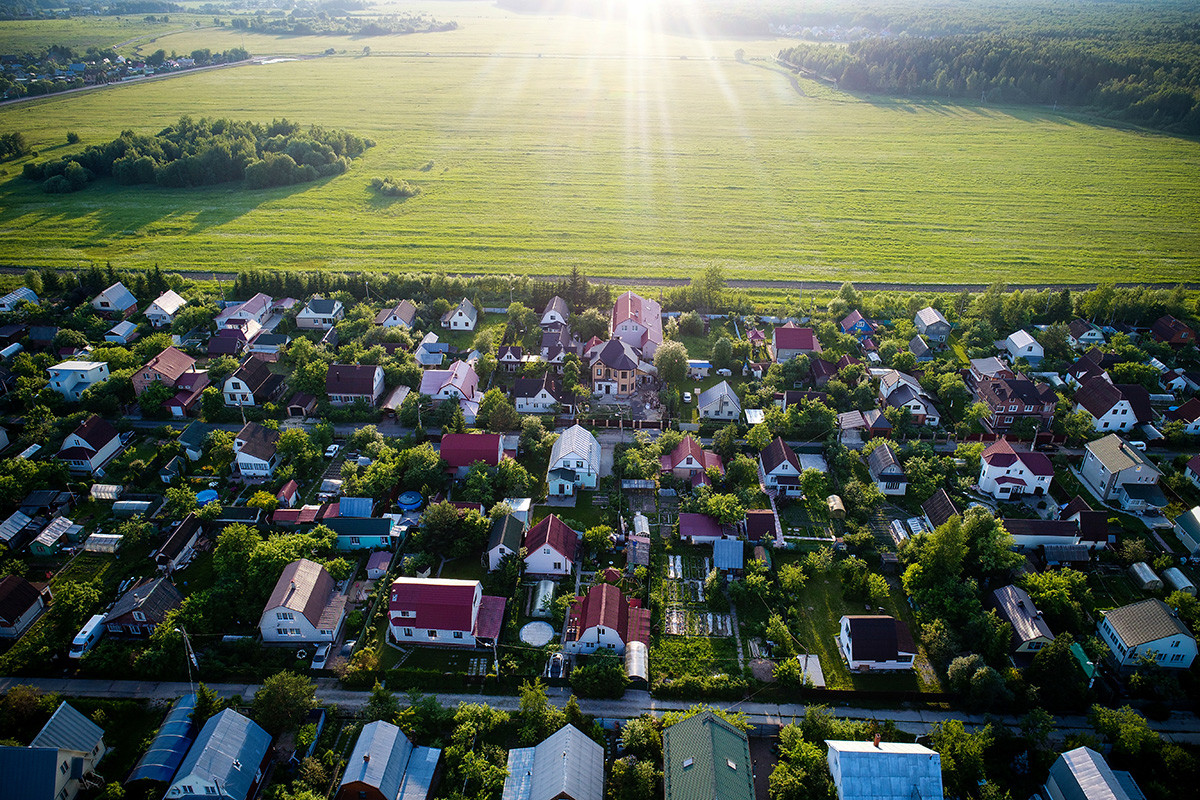 Private houses in the Moscow region.

“We interviewed cottage owners who had longed for their own home, and the maintenance issues they regularly face make them curse and scream. They ask themselves: ‘Why the hell don’t we live in an ordinary apartment where you can just call the housing department and get a handyman to come out?”

In 2001, Konstantin bought a plot of land and built a house in the village of Dudino near Moscow, about 1.5 kilometers from the nearest subway station. The land and 300- square meter house cost him the price of a two-room apartment in Moscow. The gas had to be connected separately, which cost a further million rubles ($13,500). 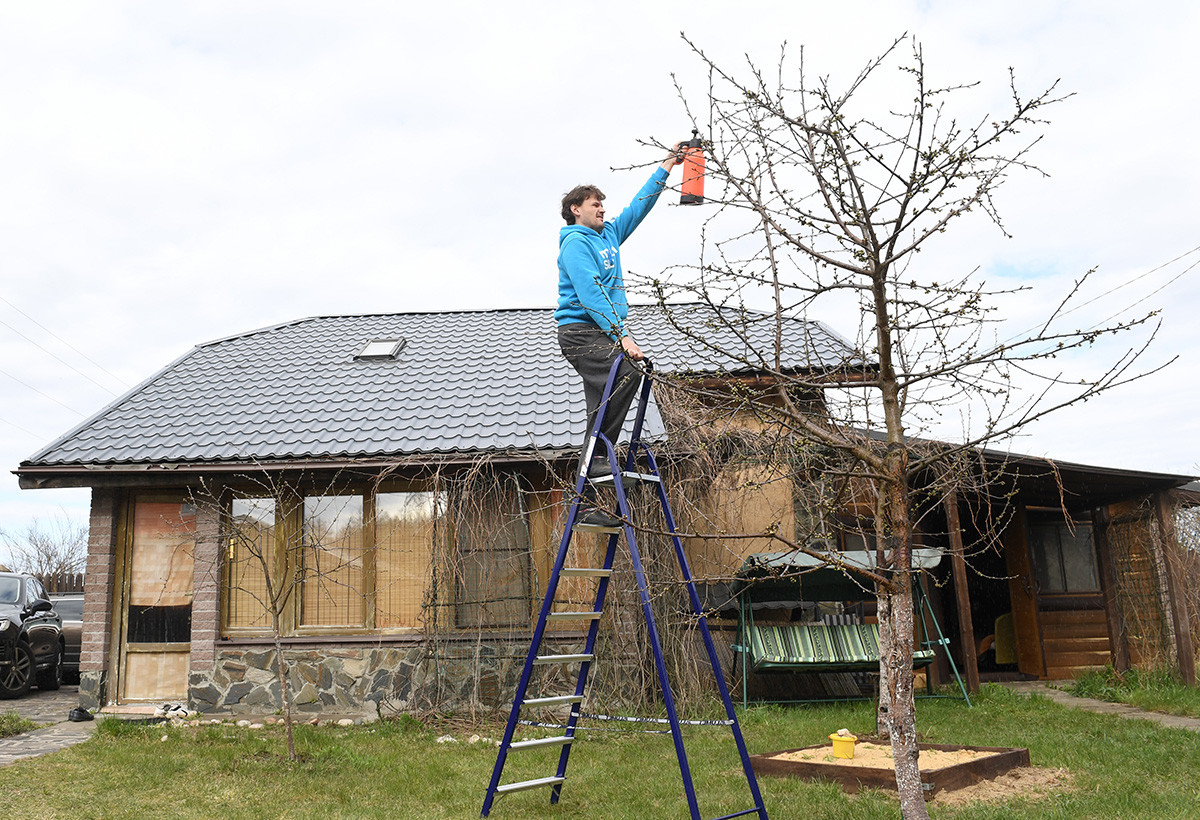 “There are no schools, kindergartens or sports complexes here. You have to drive to all the shops. The only thing within walking distance is a small stall selling bread, pasta and beer. It would be difficult to live here without a car, especially with children. But we calculated that all the infrastructure we’d need was in the city, a 7-minute drive away,” he says, assuring that they would not want to live in an apartment again.

Besides, they already knew what it means to be have your own house: “Here you decide everything yourself. We were ready for that, but it scares some people. It shatters the “quiet life” myth. For many, it’s a significant psychological factor: if you’ve never lived in a house, you don’t even know how to.” 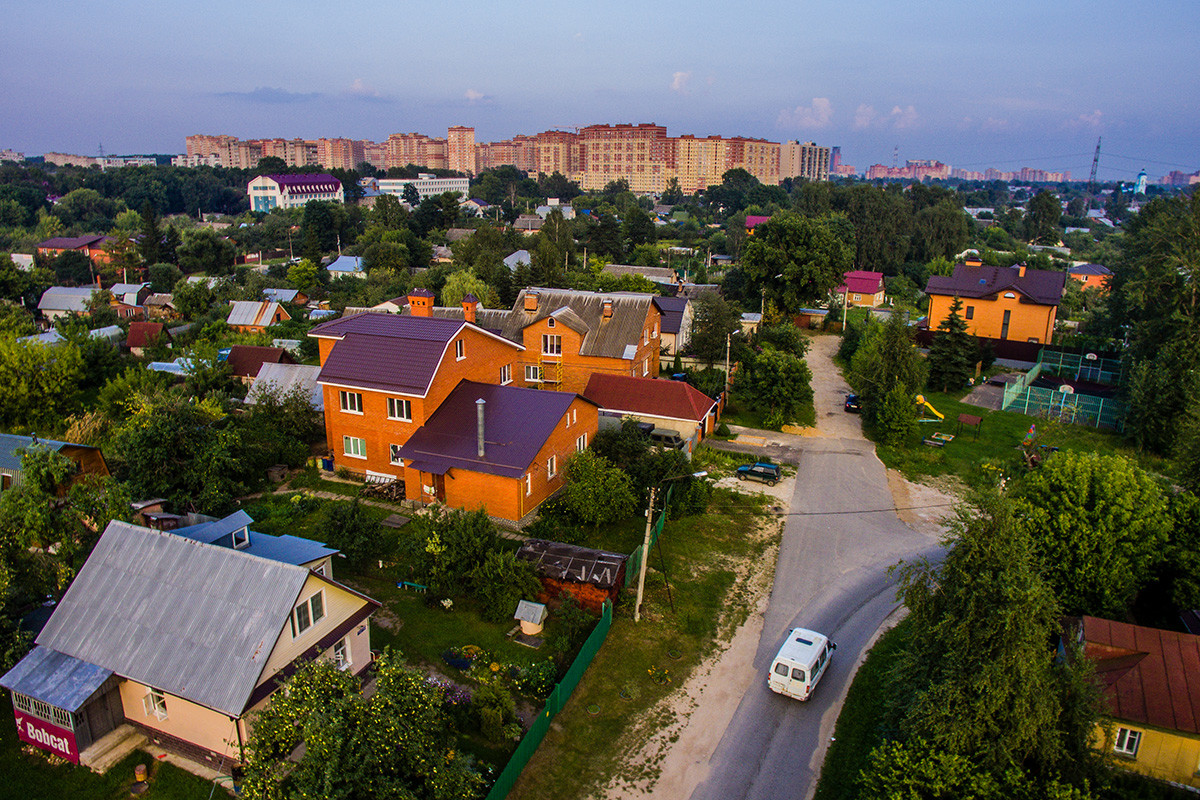 Apartment buildings and garden plots in the city of Shchelkovo, Moscow region.

The “I’m not mentally ready for such change” argument is often heard, but the number one reason for not pulling up stakes remains the bank balance. “It’s generally only the very well-off who can afford the adventure of building their own dream house. Such housing isn’t on tap. It’s not so much the cost of the land as the lack of utilities and resulting expenses,” says Alekseevsky.

If you want a house, you’ll most likely have to build it yourself. The construction industry in Russia is focused solely on apartment buildings, at all levels, says Roman Popov, associate professor of the Faculty of Urban and Regional Development at the Higher School of Economics in Moscow. “One of the traditional indicators of economic success of a region is the amount of housing commissioned. Hence, governors and mayors demand square meters,” he remarks. 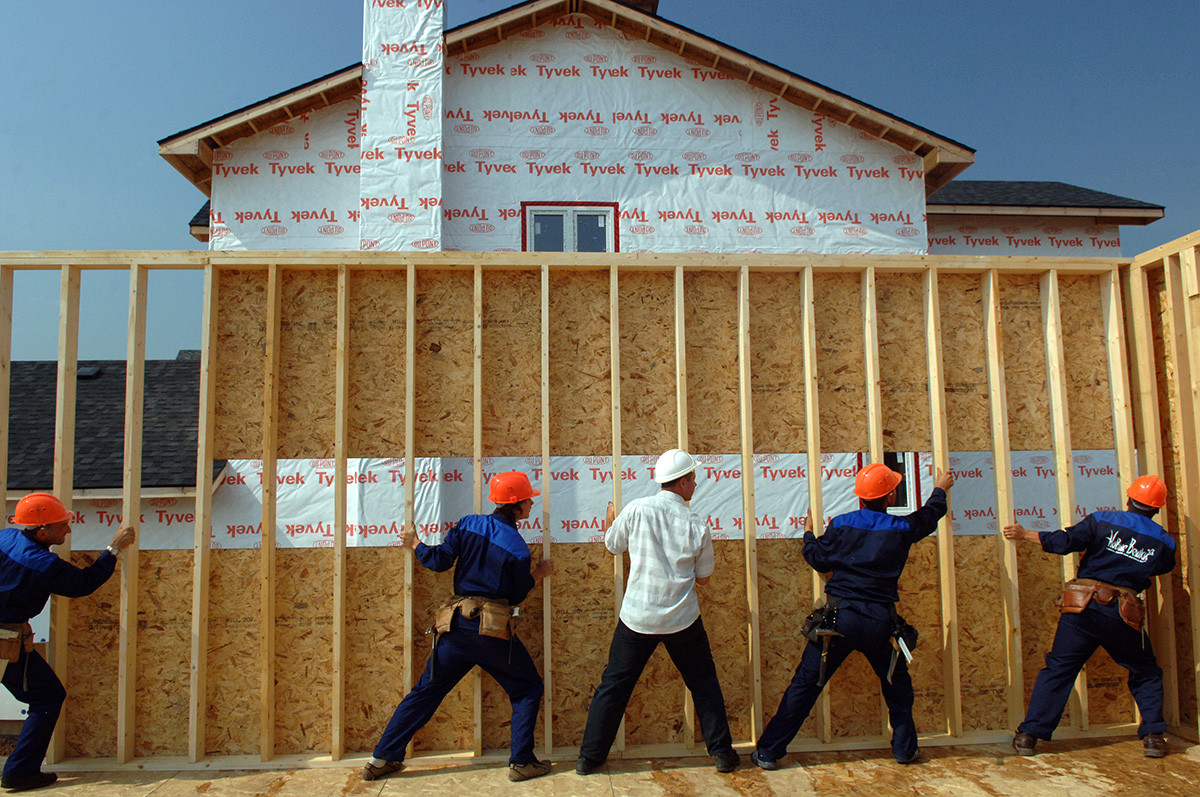 At the construction of the cottage village "New Veshki" in the Moscow region.

As before, the construction industry continues to blot the city skyline with apartment blocks. In April 2018, Russian Prime Minister Dmitry Medvedev stated that homogeneous microregions (“with a densely packed built-up environment and not always well-developed urban infrastructure”) accounted for 77% of the total housing stock. The private sector, on the other hand, is made up of the luxury market (usually outside or on the outskirts of the city) and old housing stock, where families have lived for generations.

Konstantin, who spends 50% of his time in the Netherlands, says that the construction industry regulations are a key difference between Russia and Europe. “Your quality of life in the Netherlands does not depend on whether you live in a city or in the middle of a field. You will have a decent sewage system, enough kilowatts of light, some kind of medical facility nearby and a store. Otherwise, as per the urban planning rules, the developer won’t be issued a building permit.” 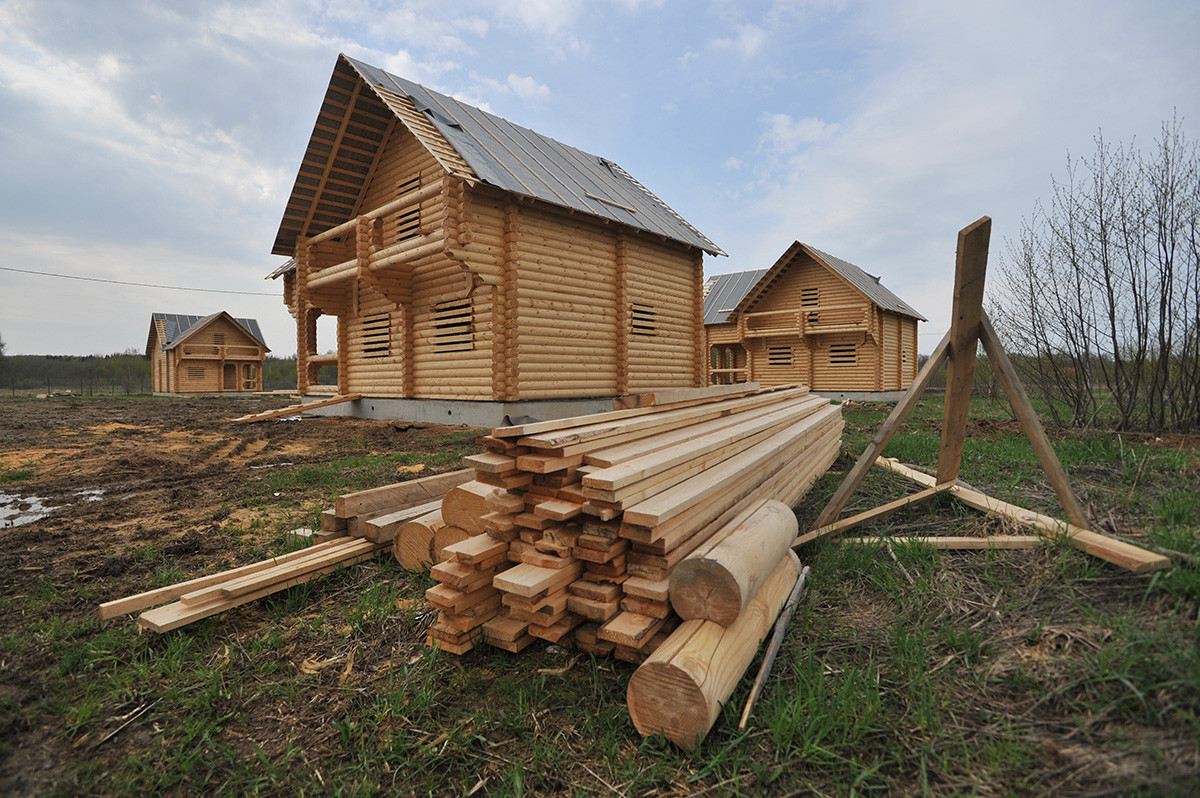 In Russia, meanwhile, available infrastructure is not a prerequisite. Moreover, since 2018, there is no need even to get a permit to build a private house; suffice it to submit a mandatory notification prior to and on completion of construction. “What utilities you hook up is your own business. Our neighbors say: ‘We don’t need electricity. We’ll go and turn on the generator, fry some meat and leave. And they have the right to. You can’t do that in the Netherlands,” says Konstantin.

However, despite the dream of owning a house, many Russians still harbor a Soviet mindset. “One aspect of this is that we still tend to see private houses as a temporary dwelling, something like a dacha (summer house). Even if it’s a proper, well-equipped house,” says Popov. 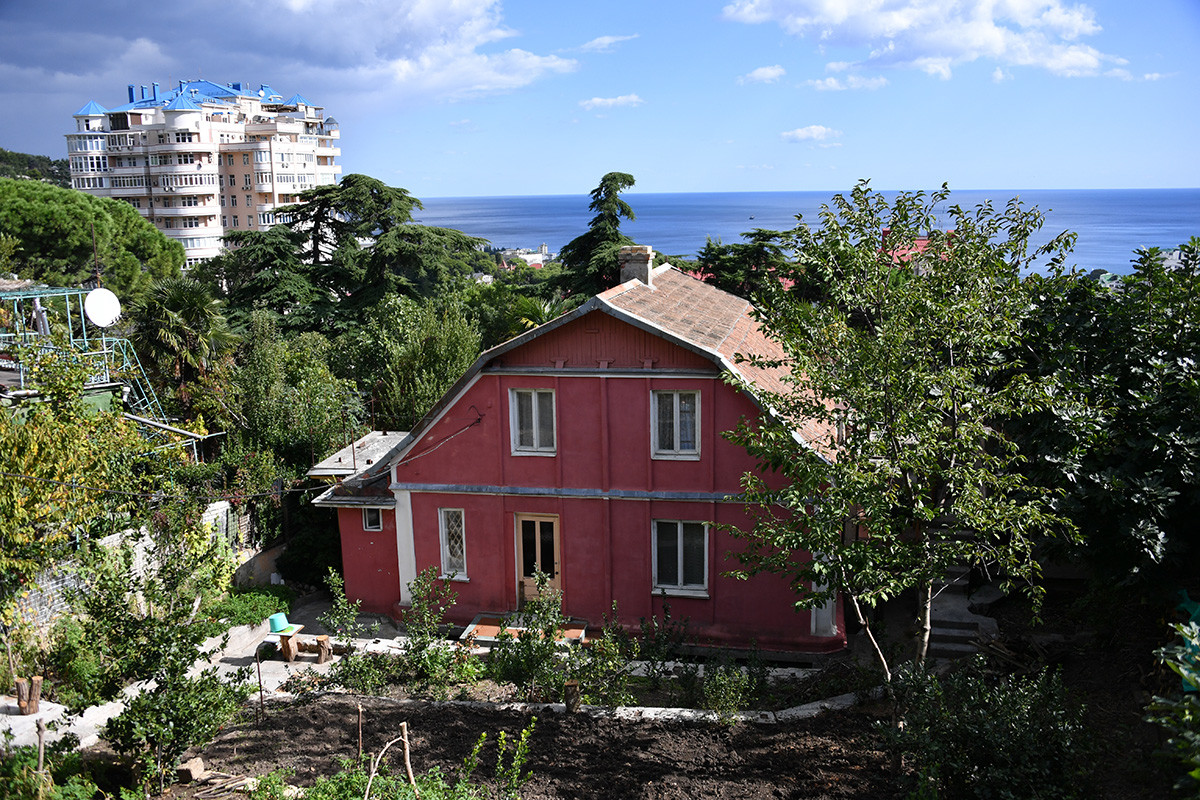 Living in an apartment block is perceived as more comfortable and therefore more prestigious. In the Soviet Union, having an apartment, a car and a dacha was considered the true marker of success. In modern-day Russia, most of those who build or buy a private house don’t abandon their apartment. “In other words, a house is not an alternative to an apartment, but a kind of add-on. Or it’s an ‘old age’ option. In the south of the country, it has to be said, private housing occupies a higher position in people’s system of values than in central Russia or, all the more so, Moscow and St. Petersburg,” Popov notes.

Read more:Why do Russians live in ‘anthills’ if the country is so big?

One such resident of southern Russian is Tatiana Fedortseva from Taganrog. This smallish city, the birthplace of Anton Chekhov, with a population of 255,000, is located on the shore of the Sea of Azov. For the past 25 years, Tatiana has been living in her husband’s six-room house and does not want to go back to living in an apartment. “Nowadays residential areas are being built up with apartment blocks. Before that, the private housing sector was large: we have a large old town with 18th-century buildings. Now the ratio of private houses to apartment buildings is about one to one.” 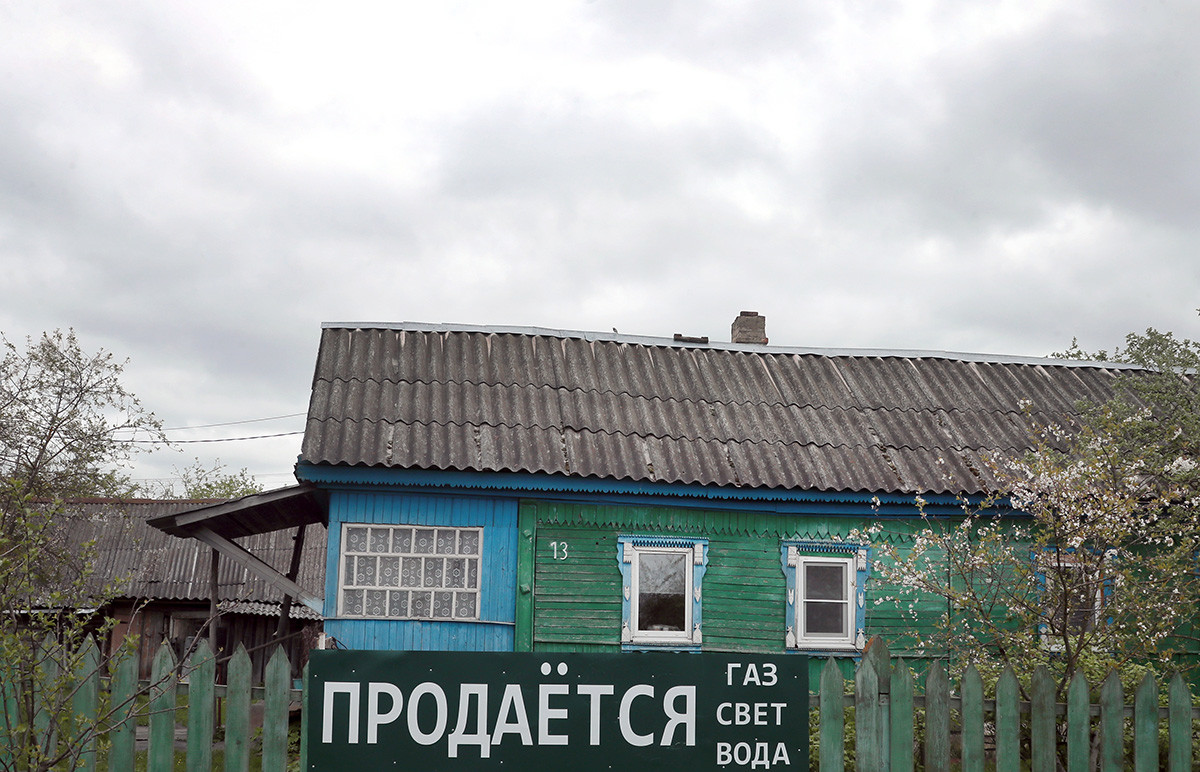 Sale of a private house in one of the villages of the Tula region.

Many of those who buy or build houses in southern Russia are newcomers from further north. Lyubov Aleksandrovna moved from Yakutia to Taganrog a decade ago. “It was my dream to move south for retirement,” she says. Her family bought a two-story house, 240 square meters, for 4.5 million rubles ($60,700). There was no interior decoration or utilities; they had to finish and connect everything themselves. Nearby there is a school, a kindergarten and a shop.

“About five years ago there was a huge influx of new arrivals here. They’d call us up on the intercom and ask if we were selling the house by any chance,” she says. 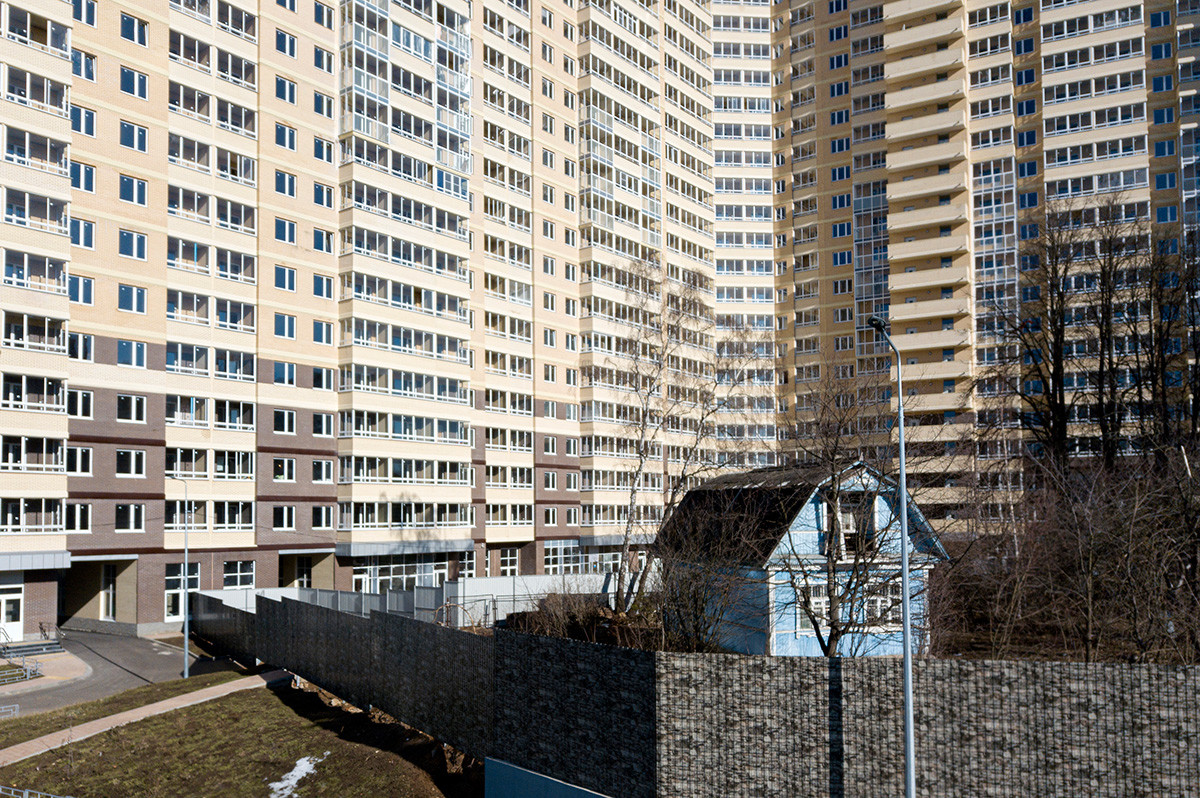 Private house in the courtyard of the "Odinburg" residential complex.

A feature of provincial Russia is the large swathes of private-sector housing, says Popov. But it’s often shabby and lacking amenities. “Although it’s detached, such housing is still viewed as second-rate. People there dream of moving into ‘normal’ accommodation, which in their mind’s eye means an apartment in a communal block. The Soviet stereotype, urban-planning policy and economic reality all feed this notion.”

About 22.6% of the Russian population has no access to a centralized sewerage system, with most using waste pits, says a report by Rosstat, the federal statistics service. According to another Rosstat study, almost 40% of residential buildings in Russia are in need of repair, reconstruction or demolition.

Even demand for that most Russian institution, the dacha, is on the wane. During the pandemic, when many found themselves self-isolating, dacha demand picked up again, but this trend is unlikely to be long-term, believes Alekseevsky: “The very idea of ​​a dacha was a key element of the Soviet myth of prosperity. Now these dachas are becoming more trouble than they’re worth. The endless traffic jams to get there and the cost of maintaining them are causing everyone to sell, but no one wants to buy.”