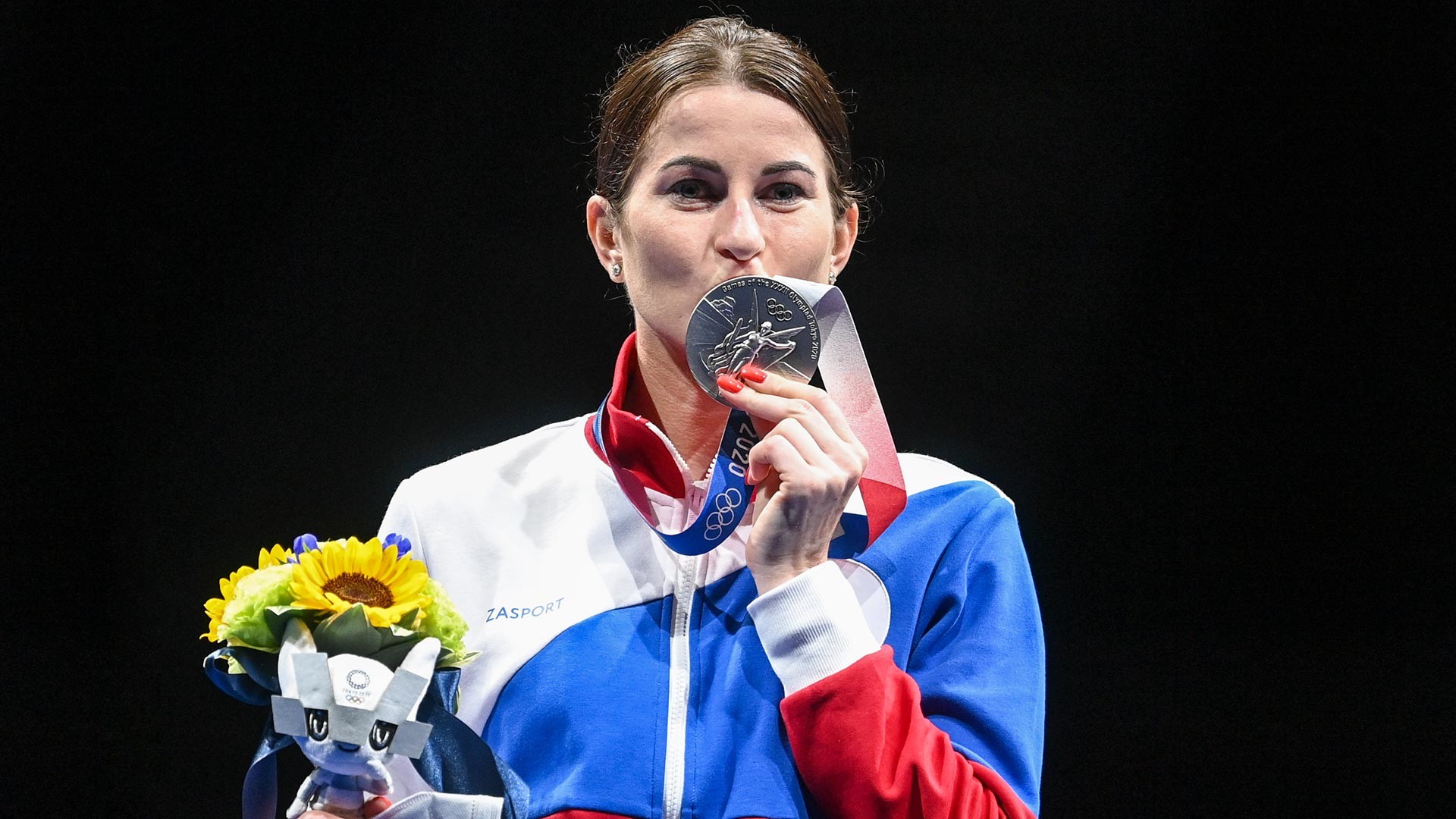 Russian athlete Inna Deriglazova, a member of the Russian national team (ROC team), who won the silver medal in the women's foil fencing competition at the XXXII Summer Olympics in Tokyo

Alexei Filippov/Sputnik
She trained with rapiers while eight months pregnant, participated in three separate Olympics and won medals in each one. We took a closer look at, perhaps, one the most dedicated athletes in Russia today.

“I’m extremely disappointed, you can’t imagine. I didn’t have time to think about anything during the bout, I just fought for each point… I used to beat her,” said the 2016 fencing champion, 31-year-old Inna Deriglazova on July 25, after winning silver at the 2020 Olympic Games in Tokyo. 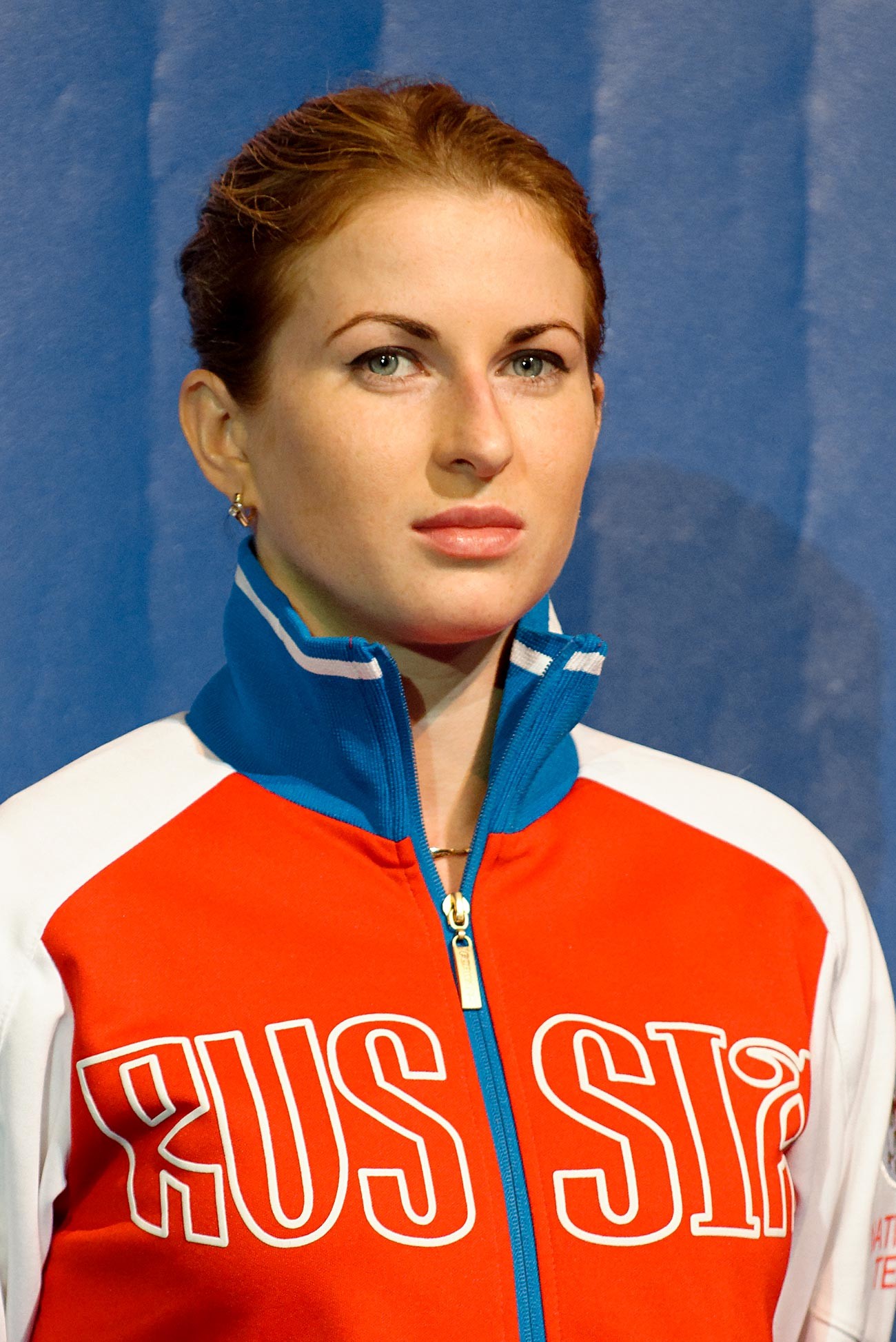 Russia's Inna Deriglazova stands on the women's foil podium of the 2013 World Fencing Championships 2013 at Syma Hall in Budapest, 10 August 2013

Inna easily got second place, but lost in the final to American Lee Kiefer with a score of 13:15. Her disappointment is understandable: six-time world champion, four-time European champion and winner of medals at three Olympics, she’s not one to take defeat lightly.

She made the hilarious choice of walking out to the Imperial March from Star Wars at the Games.

They really played Imperial March before the fencing match 😭😭😭#Tokyo2020#starwars#USA#ROCpic.twitter.com/dW0EVOQLhu

From the start, Inna’s rival was on the offensive. Several times, Deriglazova evened the score, before finally submitting to the American.

Inna was born on March 10, 1990, in the small town of Kurchatov, Kursk Region (474 km from Moscow). When the girl turned eight, her school received a visitor - Lidia Safiullina, who was looking for future star athletes.

“I was faced with a choice. I really liked rhythmic gymnastics and figure skating. I had no idea what fencing was and couldn’t have imagined [doing it], but that’s how it all turned out… I even went to my mom and asked: ‘Can I please take up fencing?’ She was very surprised, telling me that the sport is suitable mostly for boys, ‘musketeers’ and so on. But I was interested, so I enrolled in the class,” Inna remembers. 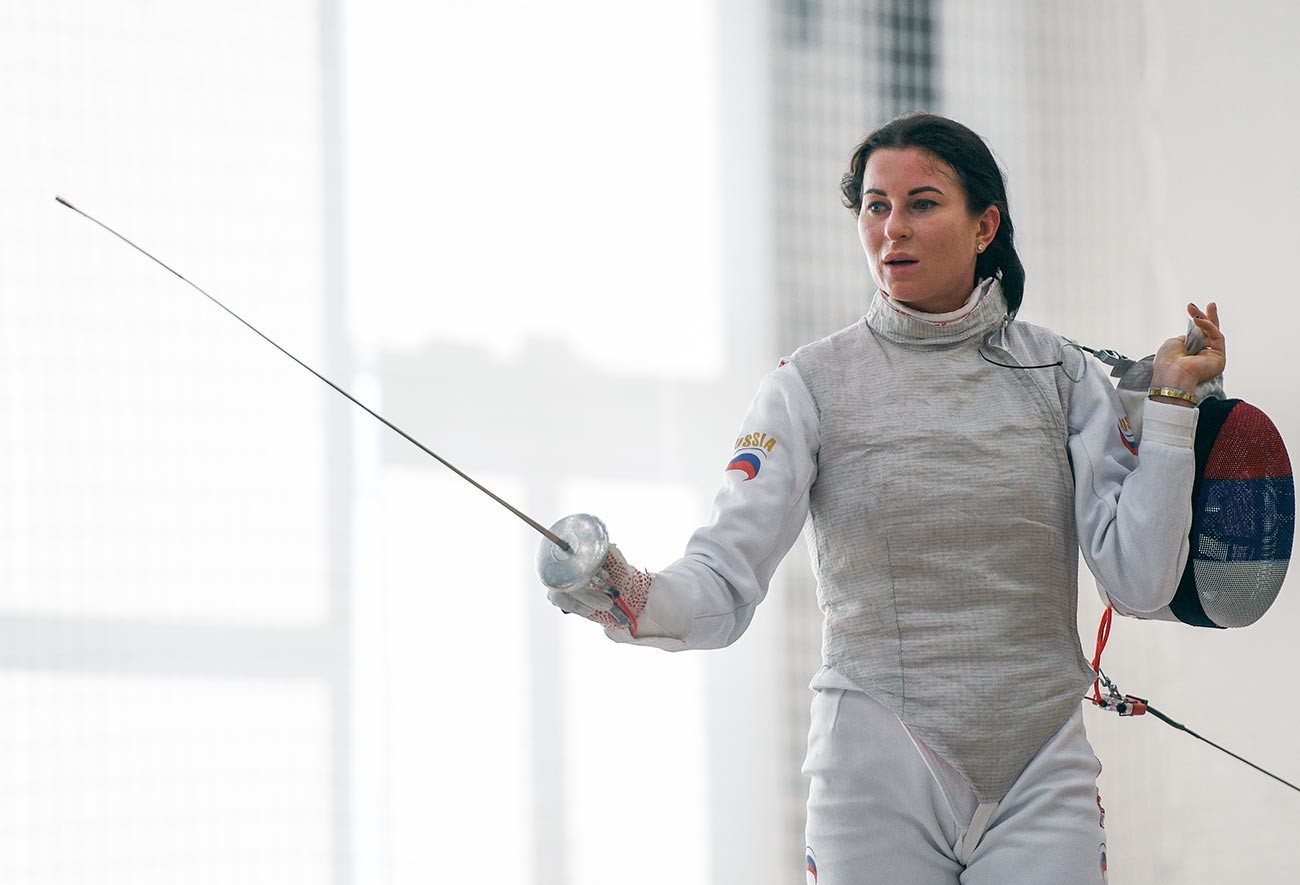 At first, Inna and her friend were simply curious and even missed some classes occasionally, but soon, the girl received her first real rapier and was competing at city level. It was then that Deriglazova understood that she had fallen in love with the sport - after tasting her first competition victories. 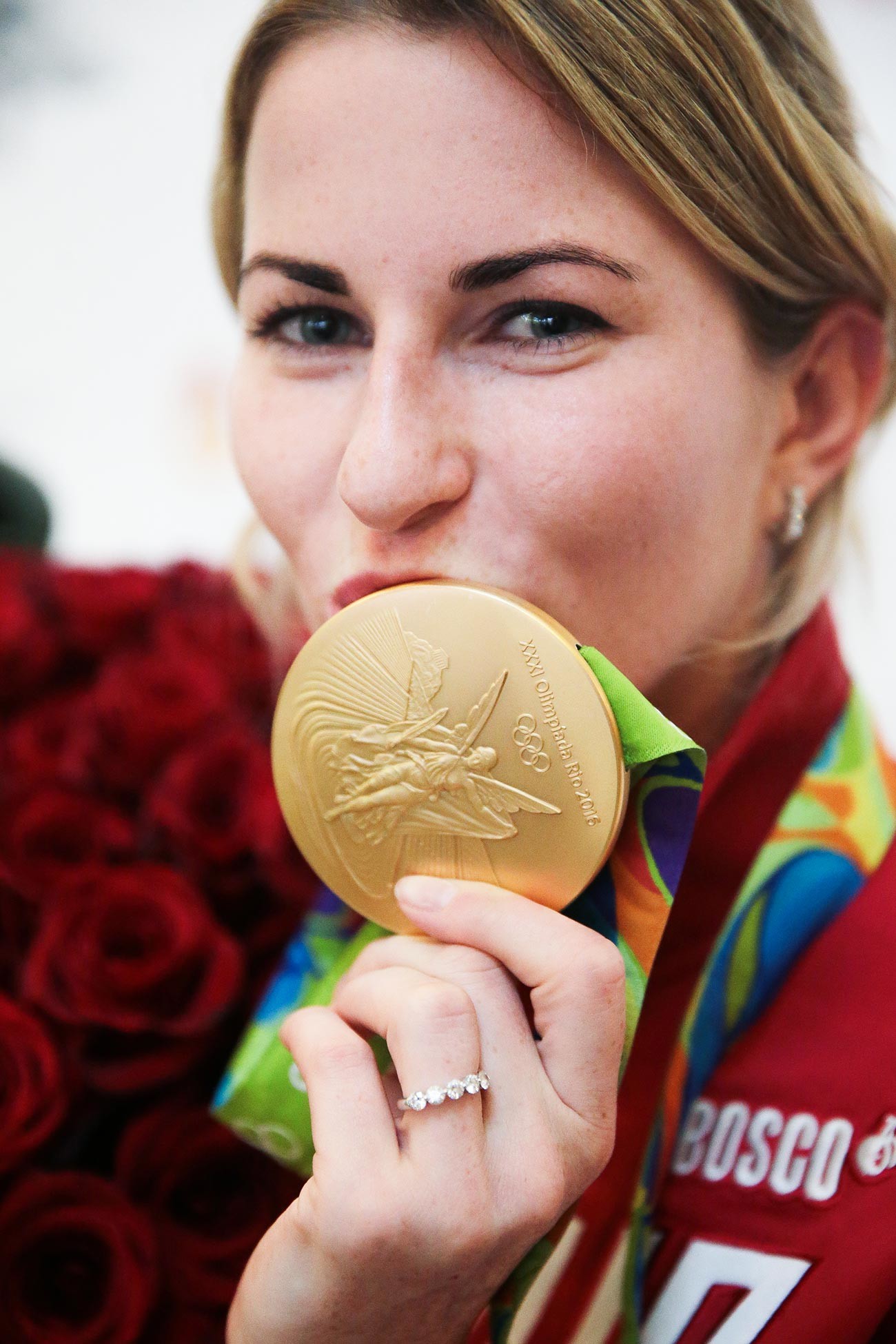 Already at age 12, she became accustomed to beating more experienced 16-year-old fencers. In 10th grade, Inna was already participating in tournaments with cadets and her academic performance reflected that: she started getting Cs, instead of her usual Bs. 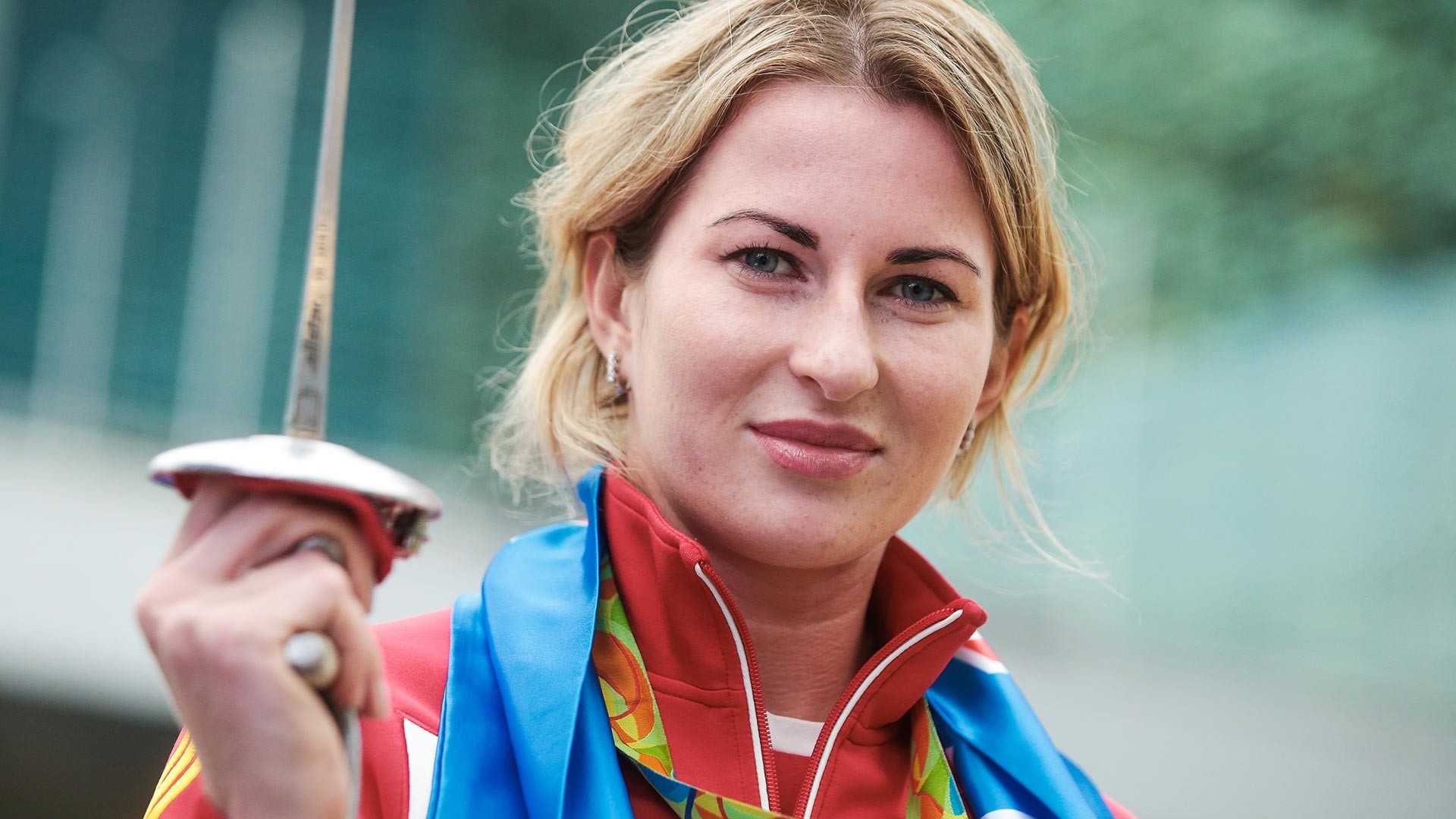 Nevertheless, after graduating from school, Inna enrolled in the South-Western State University in Kursk and began studying law. It wasn’t all smooth sailing, but Inna remains grateful for the strict academic standards the institution is known for.

At 18, Inna married and, the following year, gave birth to her daughter. According to her, she continued training while several months pregnant.

“I understood that sports would only become more difficult with time. I had no idea if I could even return, but my coach trained with me even during pregnancy - gave me classes [while I sat] on a chair, eight months pregnant. Of course, coming back after pregnancy is difficult, but my really young age made it possible,” she says. 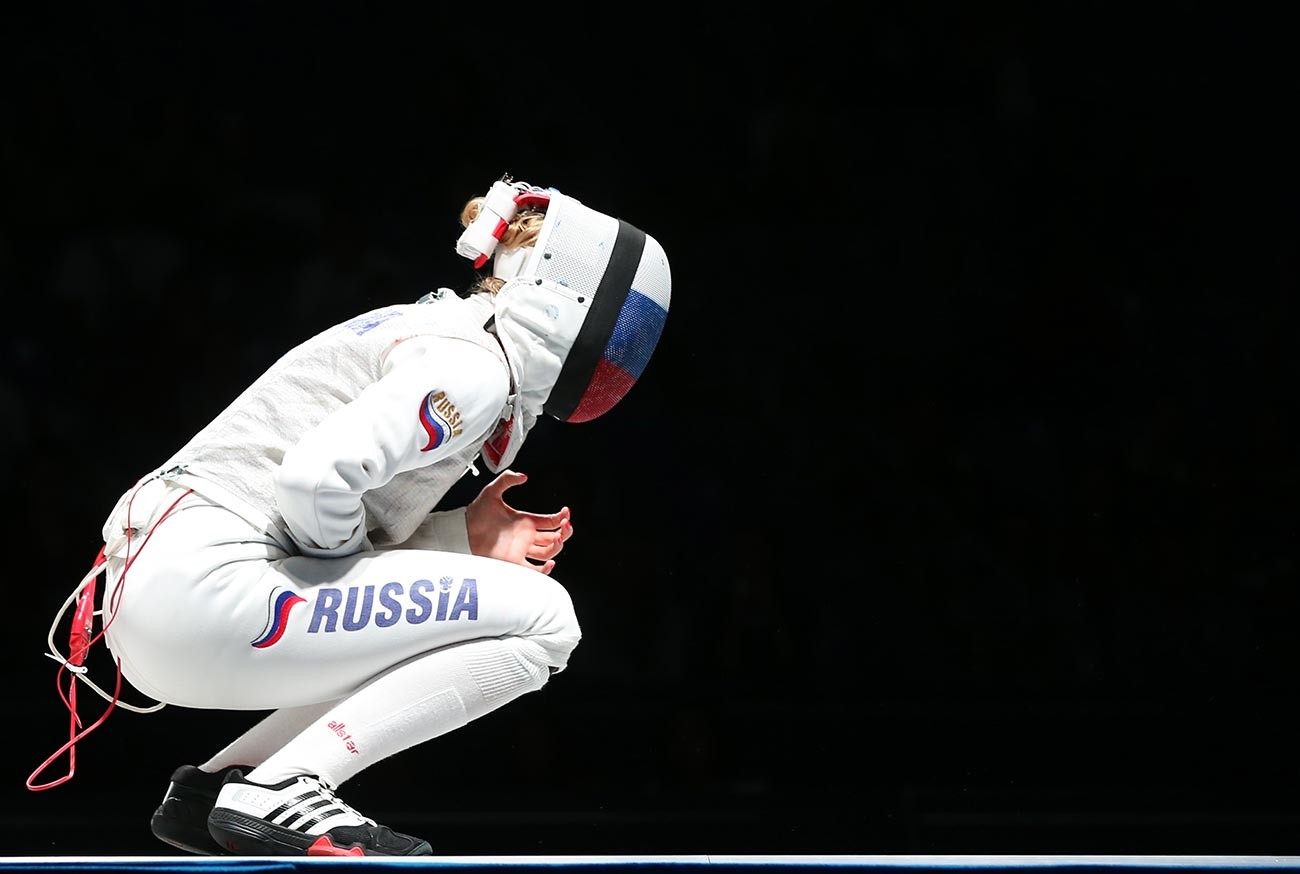 In 2010, the athlete made the national team. And in less than two months, she took second place at the Russian Championships. A few months later, the young mother scored a personal and a team bronze medal in Europe, losing in the semi-finals to Italian Valentina Vezzali. In 2011, Deriglazova won her first team gold at the world championships.

Two years later, she took part in the 2012 Olympic Games in London, winning silver in a team competition. In 2016, she received gold at the singles in Rio de Janeiro - the only other Russian to achieve the feat was Elena Belova in 1968. 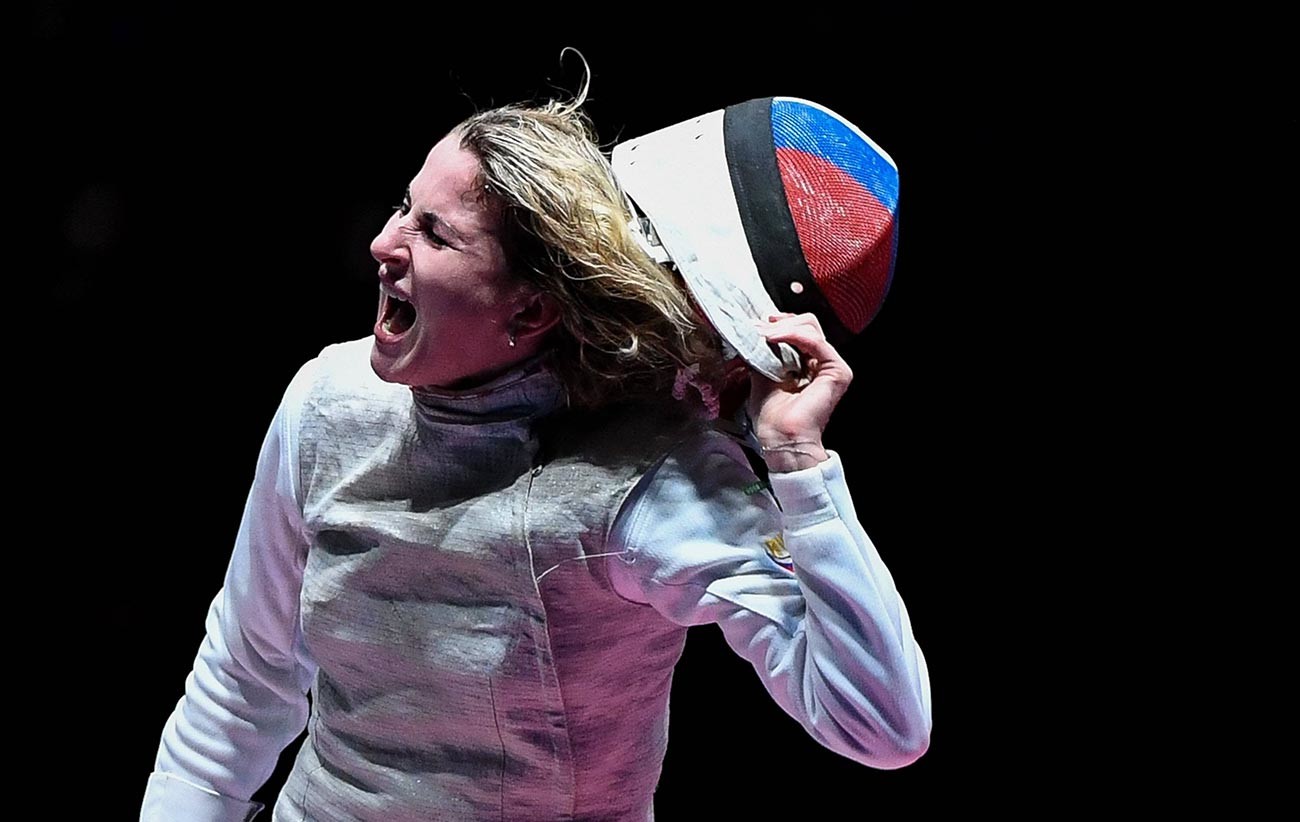 “In the battle of characters, bravery always wins… I don’t believe that becoming Olympic champion made me reach my limit. There are five-time Olympic champions in existence. There are far higher achievements we can strive towards,” she commented on her victory then. 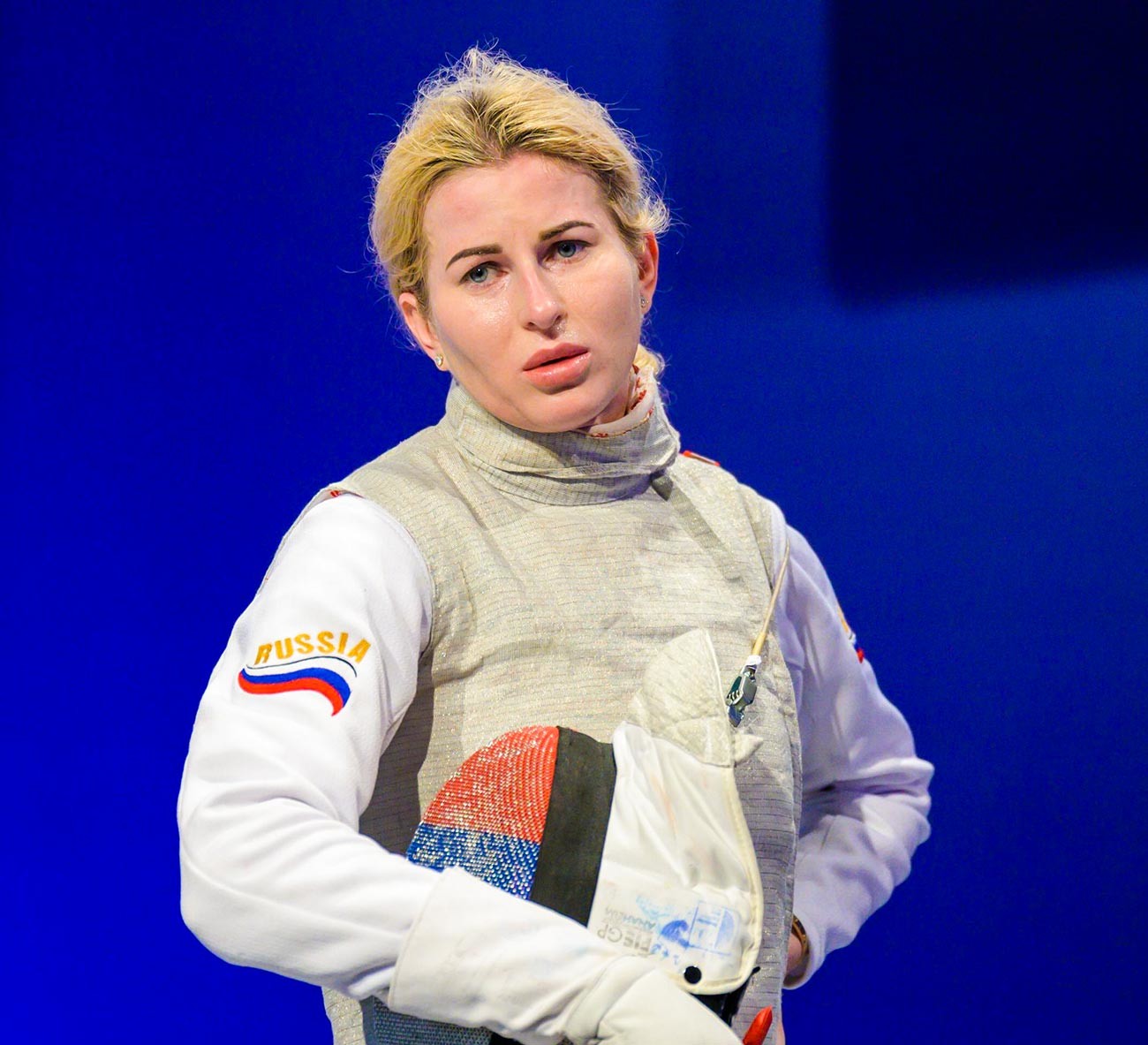 Inna spent most of the time preparing for the Tokyo Olympics in her native Kurchatov, where she lives today.

“For me, rest amounts to work and training, but here, in Kurchatov. I continue to train twice a day for the entire week here, as well, except Saturday, but it’s much easier to handle the intensity here at home,” she claims. 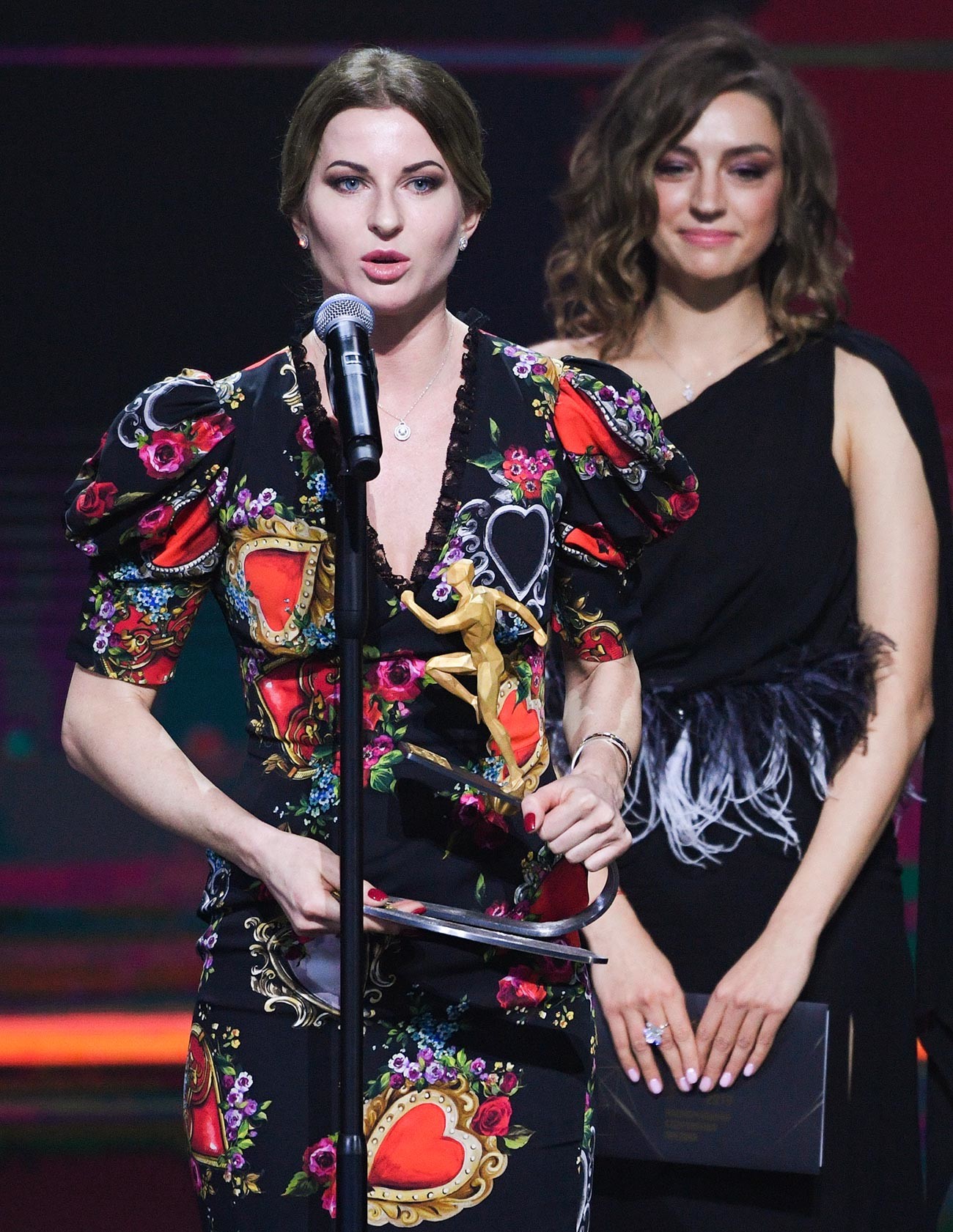 Winner of the 2019 National Sports Award in the "Pride of Russia: Athlete of the Year" category, Olympic champion and six-time world fencing champion Inna Deriglazova at the award ceremony

Deriglazova divorced her husband in 2019, retaining custody of her daughter, Diana, whom she raises with the help of her mother. Diana is also into fencing, as well as dance. 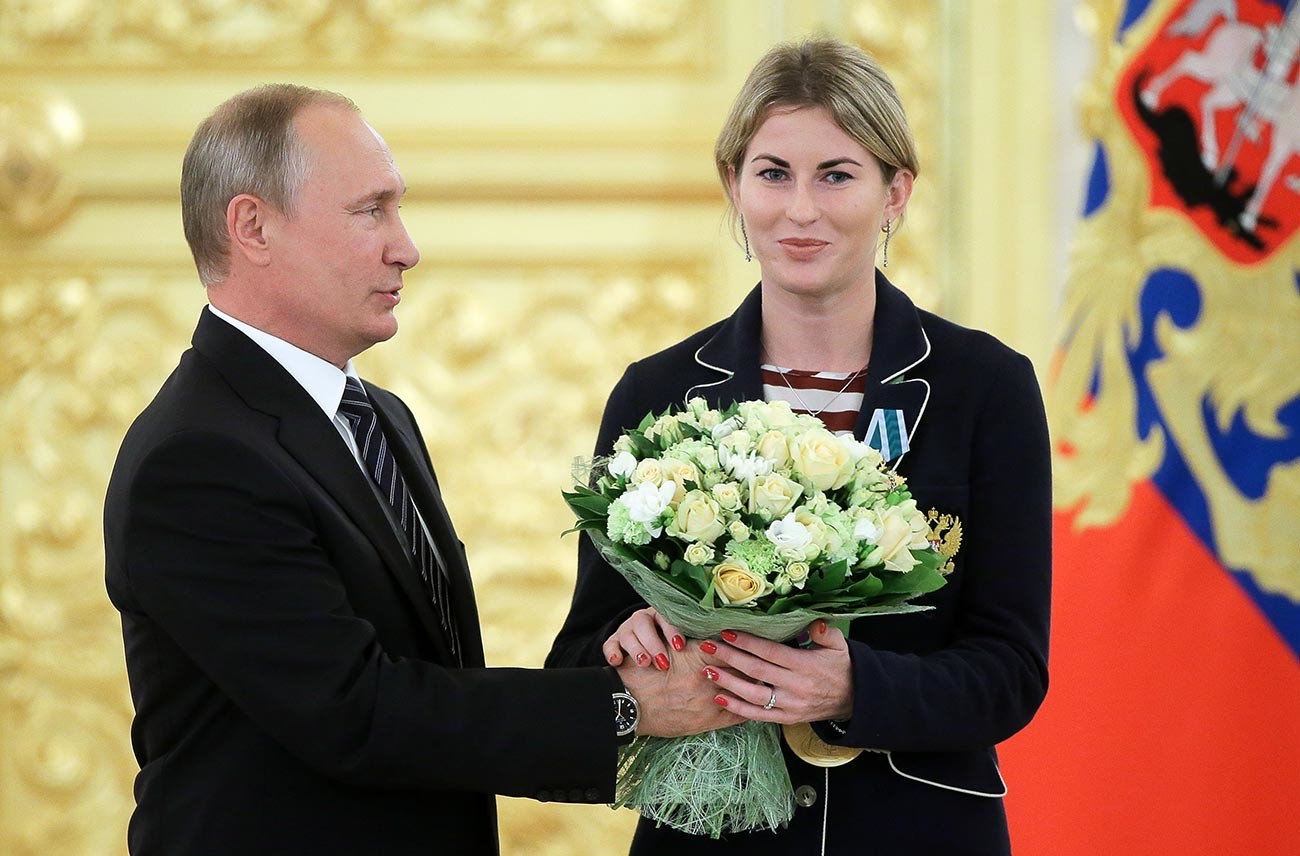 Russian President Vladimir Putin and Olympic saber fencing champion Inna Deriglazova, recipient of the Order of Friendship, at the awarding ceremony for members of the Russian Olympic team - winners and medalists of the 2016 Rio de Janeiro Olympics in the Kremlin

Deriglazova plans to win gold in the team division at the Tokyo Olympics. And she hasn’t yet considered what her plans are for the 2024 Olympics in Paris.

“At this time, I have to think only about the team matches. The Olympics continue. I’ll unwind for a couple of months later on and decide. I’d like to carry on competing. And I want to be successful at it. But, in order to do that, I need massive resources of willpower and health. So, we’ll see,” Inna said after her first match.