Traditional female costumes from all over the Russian Empire (PHOTOS) 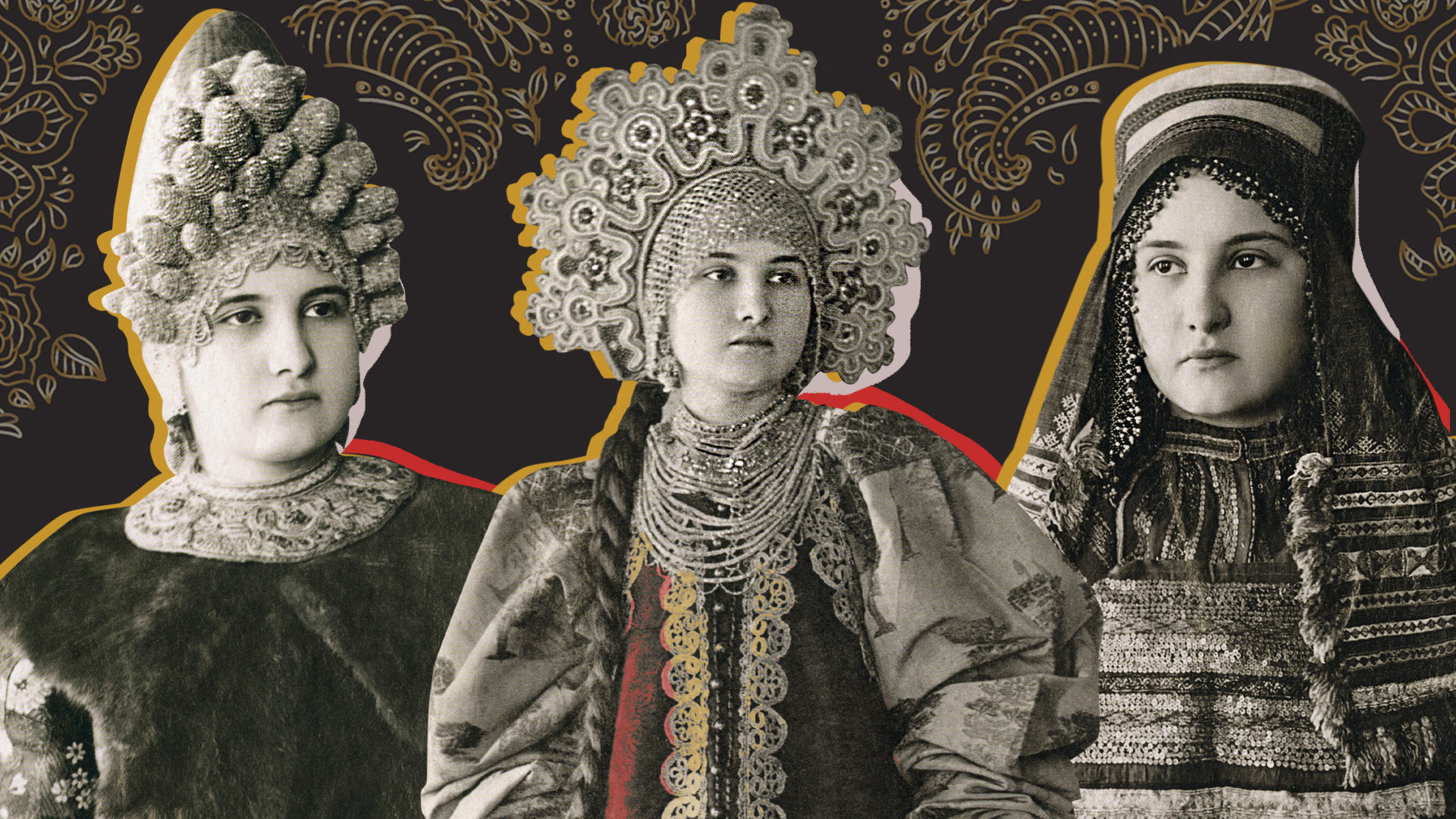 At the 1900 Paris Exposition, the photo exhibition of Russian traditional costumes was tremendously popular. It featured images from the private museum of antiquities belonging to Natalia Shabelskaya. Visitors were particularly fascinated by the starkly different elements of clothing from different provinces of the Russian Empire. The difference in costumes between the country’s south and the north made the strongest impression.

Historically, different parts of Russia developed apart from each other, which left an imprint on their cultural characteristics. Each region had its own unique craft, its own unique style of painting and architecture. So it’s no wonder that each province also had its own traditional costume.

Shabelskaya's photographs are of great historical value: they were made at the end of the 19th century in a studio with her daughters and models posing in the costumes. The private photo collection was bought by Nicholas II and donated to the Russian Ethnographic Museum, where it’s kept still. Let's take a look at some of these fascinating images. 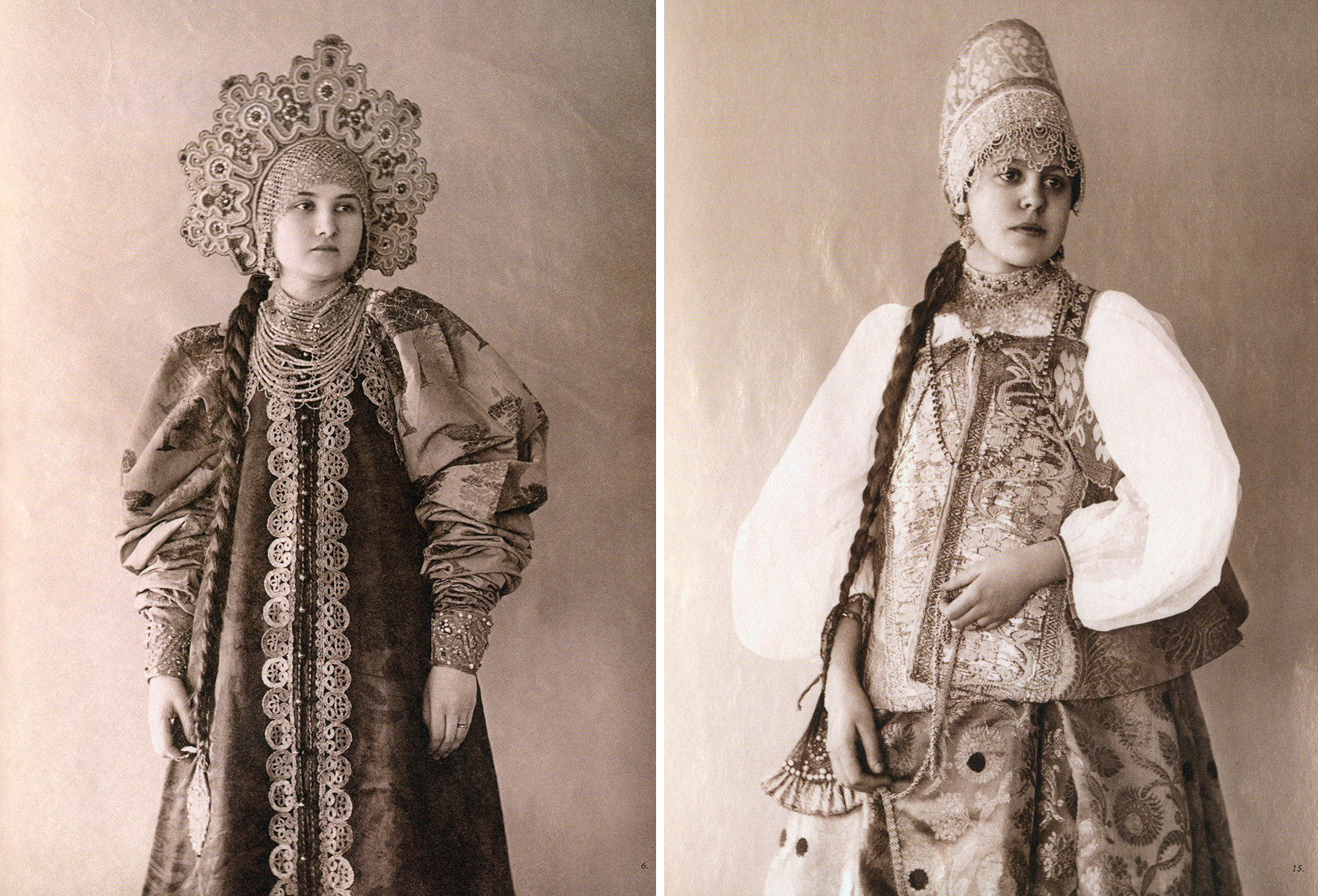 The main element of women's costume in Russia was a sarafan - a long sleeveless dress that was worn over a shirt with puffy and beautifully embroidered sleeves. This form of dress was worn by both peasant women and merchant women, the only difference was in the fabric used and the wealth of decoration and accessories, such as cuffs and beads. 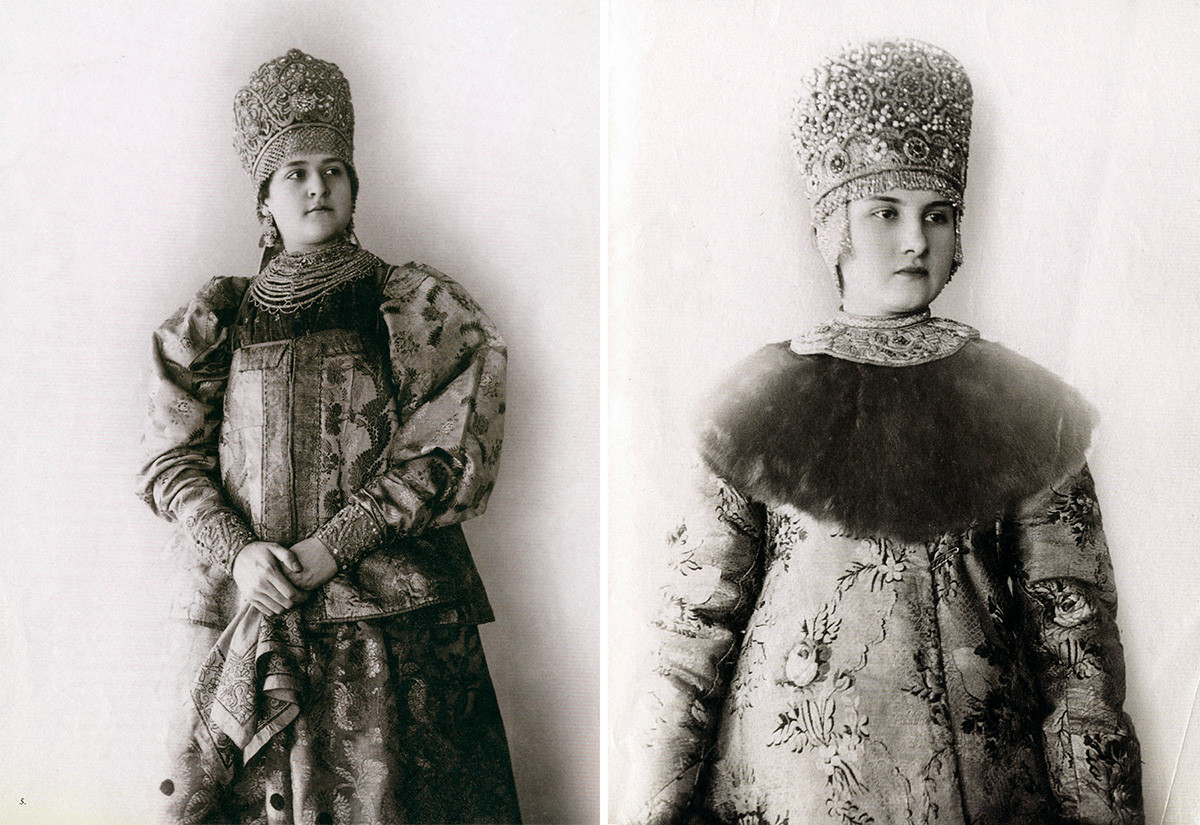 The second most important element of the Russian costume was the headdress, which is often generically referred to as a kokoshnik. In fact, there were dozens of varieties of headgear – take the example of just one region, the Arkhangelsk province above, and you can see how different the headdresses were. 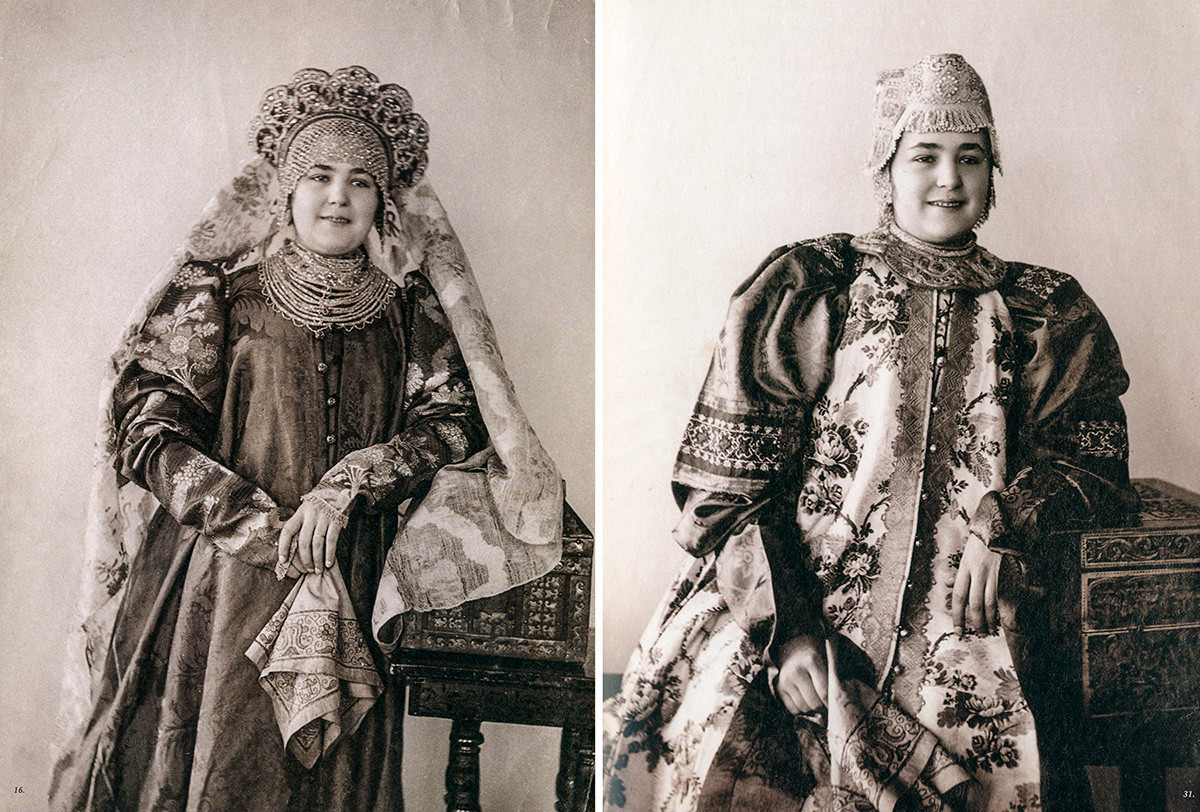 Shirt sleeves were often made very long and fastened on the arm in a way that made them look puffed. Wrists were covered with richly decorated cuffs made of velvet, silk or other expensive fabric, and embroidered with beads and pearls. 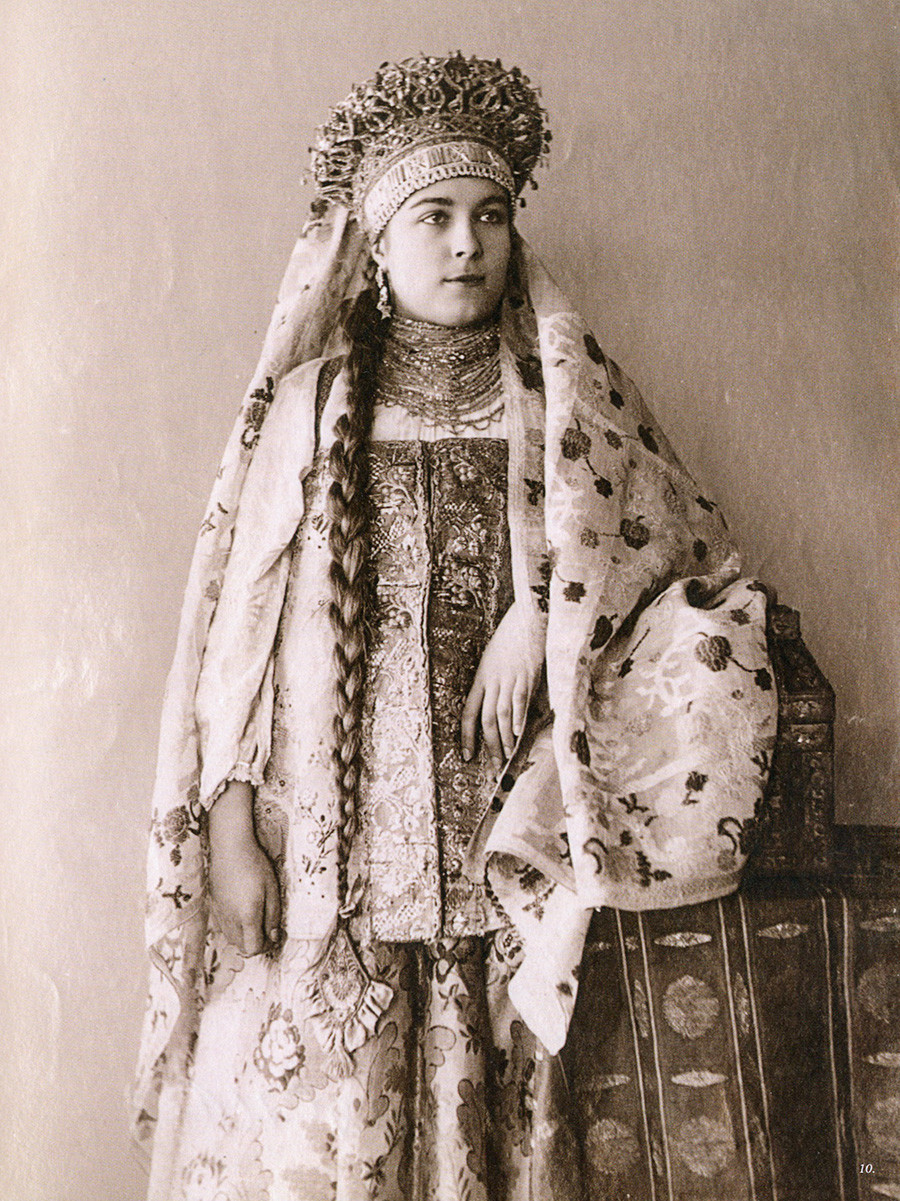 The headdress in this photo is a unique Vologda kokoshnik worn for weddings, called coruna. Such a headdress, embroidered with beads, was very expensive and was made by the best craftsmen. A kokoshnik was often worn with a headscarf, while this coruna has a whole shawl attached to it. 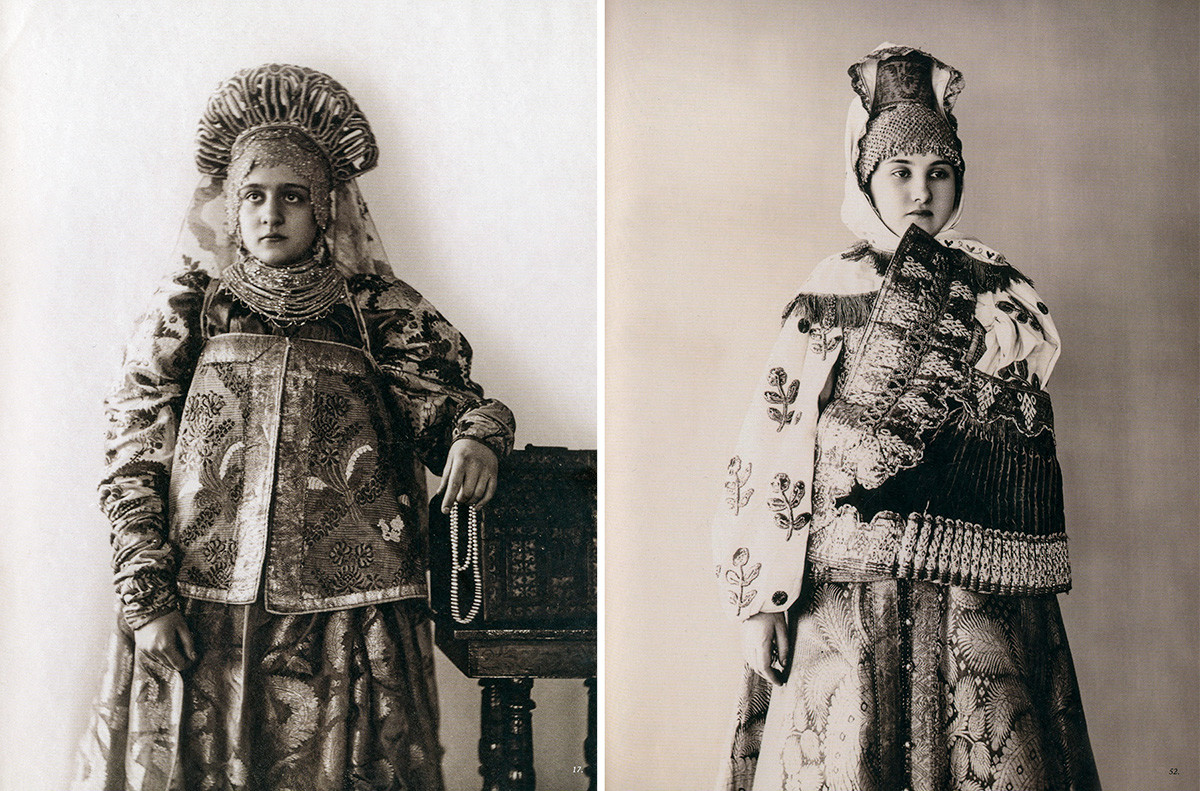 An apron was often worn over a sarafan, and a sleeveless jacket (dushegreya, meaning warming the soul) was worn as outerwear in the cold season. It could be short or knee-length and was often lined with fur. 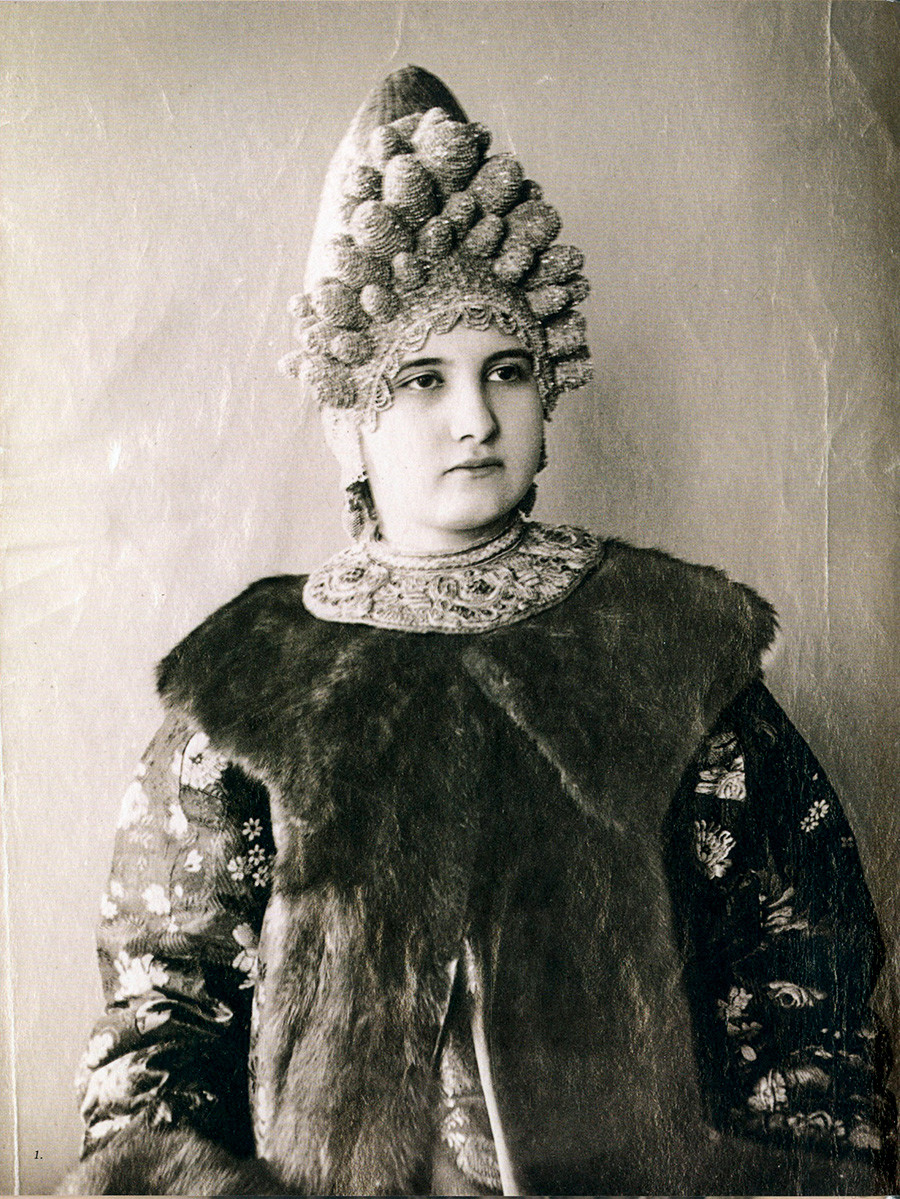 One of the most unusual headdresses can be found in the Pskov province. It is called shishak (from the Russian word for ‘cone’). Embroidered with mother-of-pearl, this type of kokoshnik was very expensive, so it was worn only on special occasions. Its unusual shape, of course, had a special meaning as cones symbolized fertility, representing grain and seed. 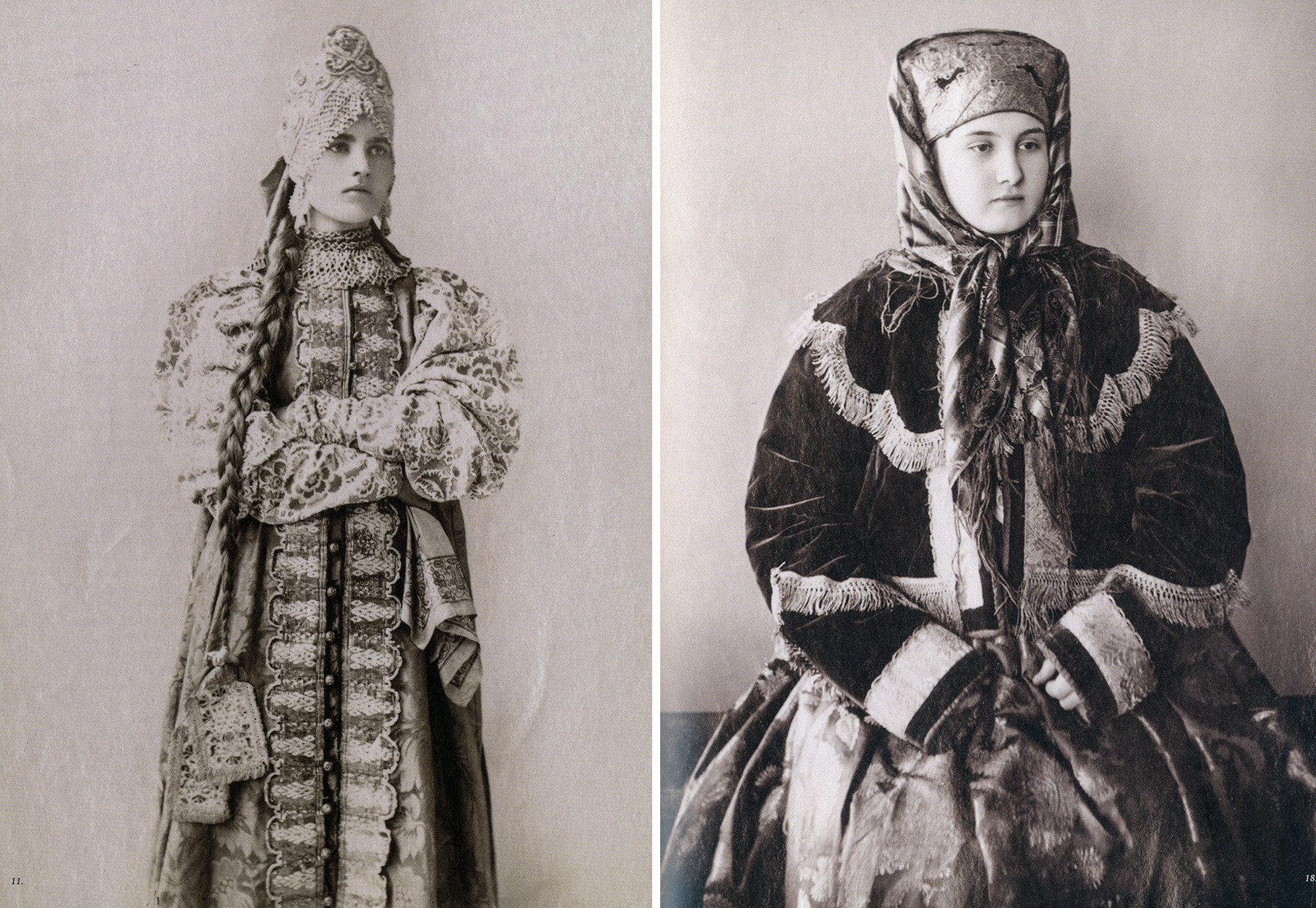 Nizhny Novgorod was the venue of one of Russia’s leading fairs, where the finest craftsmen from nearby provinces gathered. So, the local version of the traditional costume had the most variety and elaborate decorations and elements: a crown, earrings, lace, gold thread embossing, and a most incredible selection of fabrics and kokoshnik shapes. 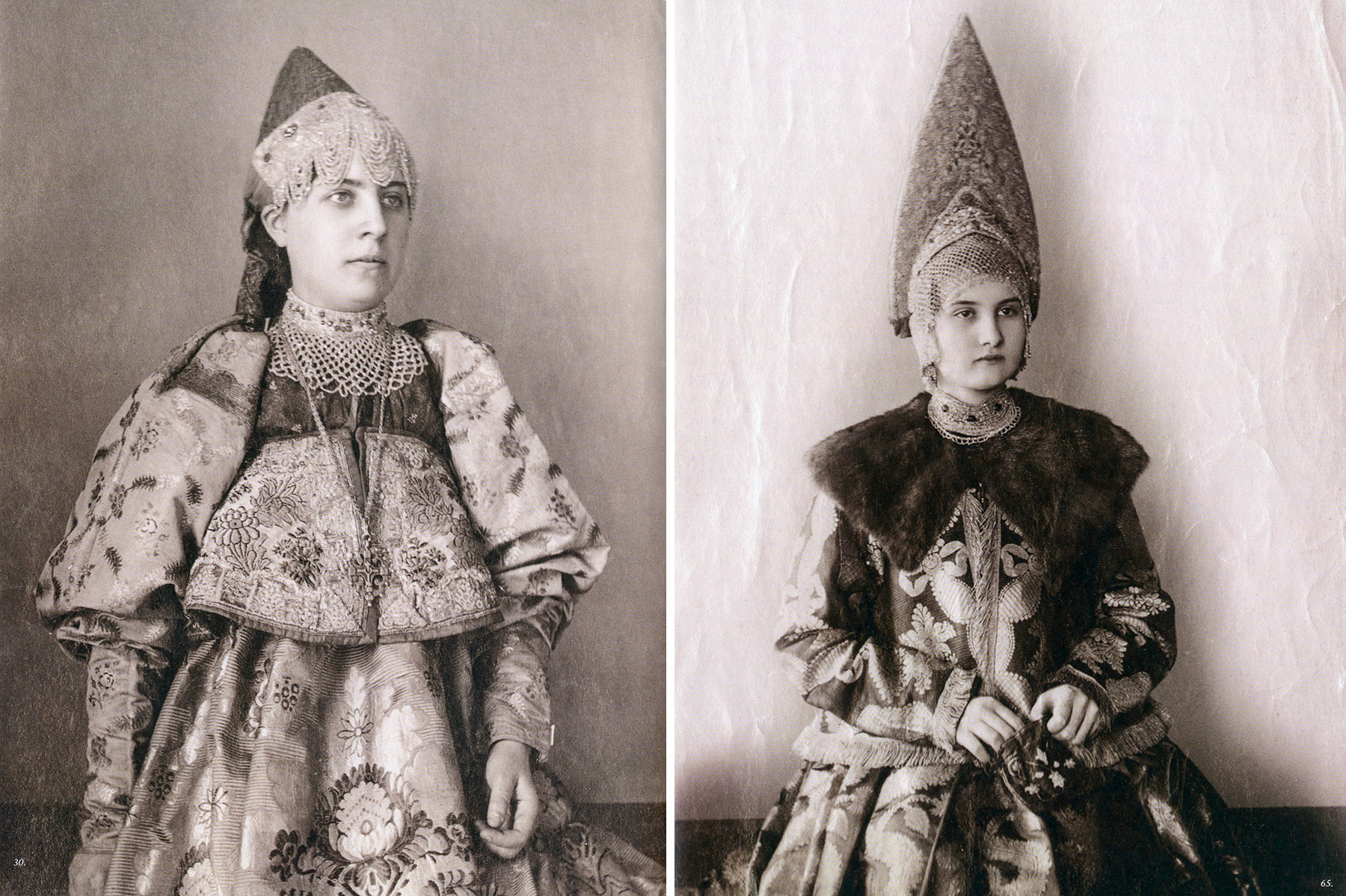 In the photo on the left, you clearly see a decoration made of a special string (gaitan) with a pectoral cross. Often the string was made of a strip of fabric or braid and decorated with beads, with a cross or a small icon attached. It could hang as low as the waist. In the photo on the right, you see a tall "one-horned" kokoshnik, a festive headdress typical of the Kostroma province. 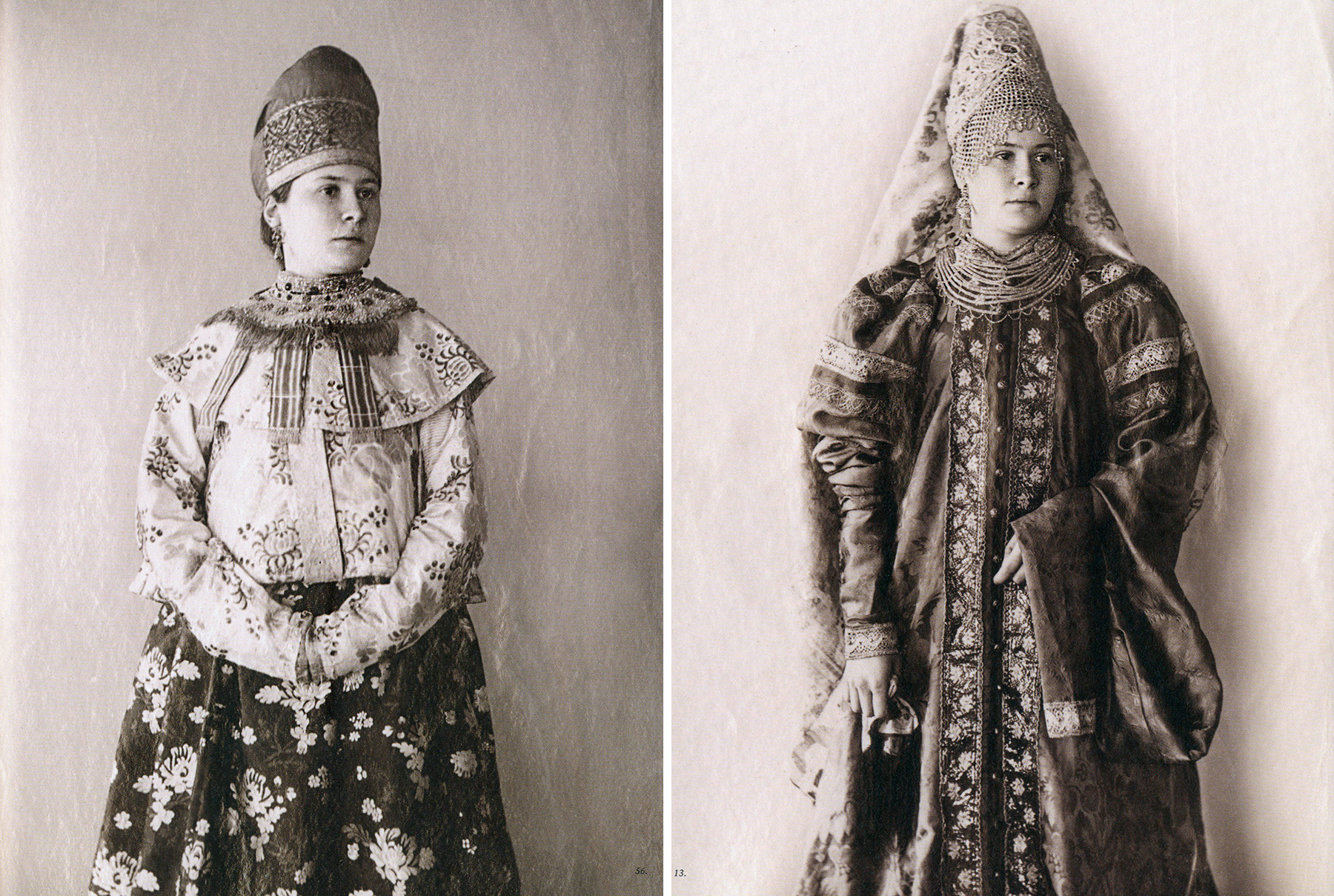 An interesting feature of some shirts were double sleeves with slits, and which was usually part of a wedding costume. The long part of the sleeves went down almost to the floor. This type of sleeve is mentioned in the Russian folk tale, the Frog Princess. Having been transformed into a beautiful girl called Vasilisa, the princess danced at a feast waving her sleeves and white swans flew out of them at each swing. 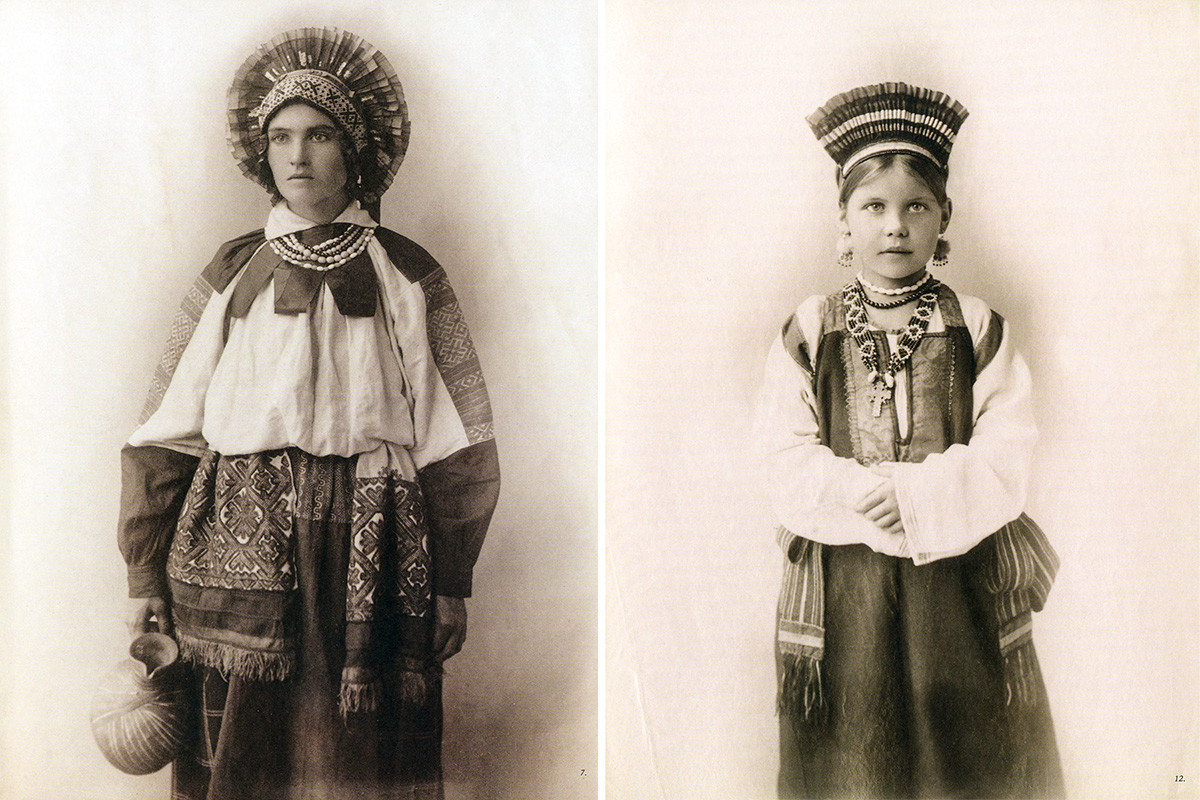 In the south, traditional "sarafan sets" became popular only in the late 19th century, brought there from northern and central Russia. A more widespread form of local traditional costume consisted of a shirt and a poneva skirt, which was tied with a wide and elegantly embroidered belt. 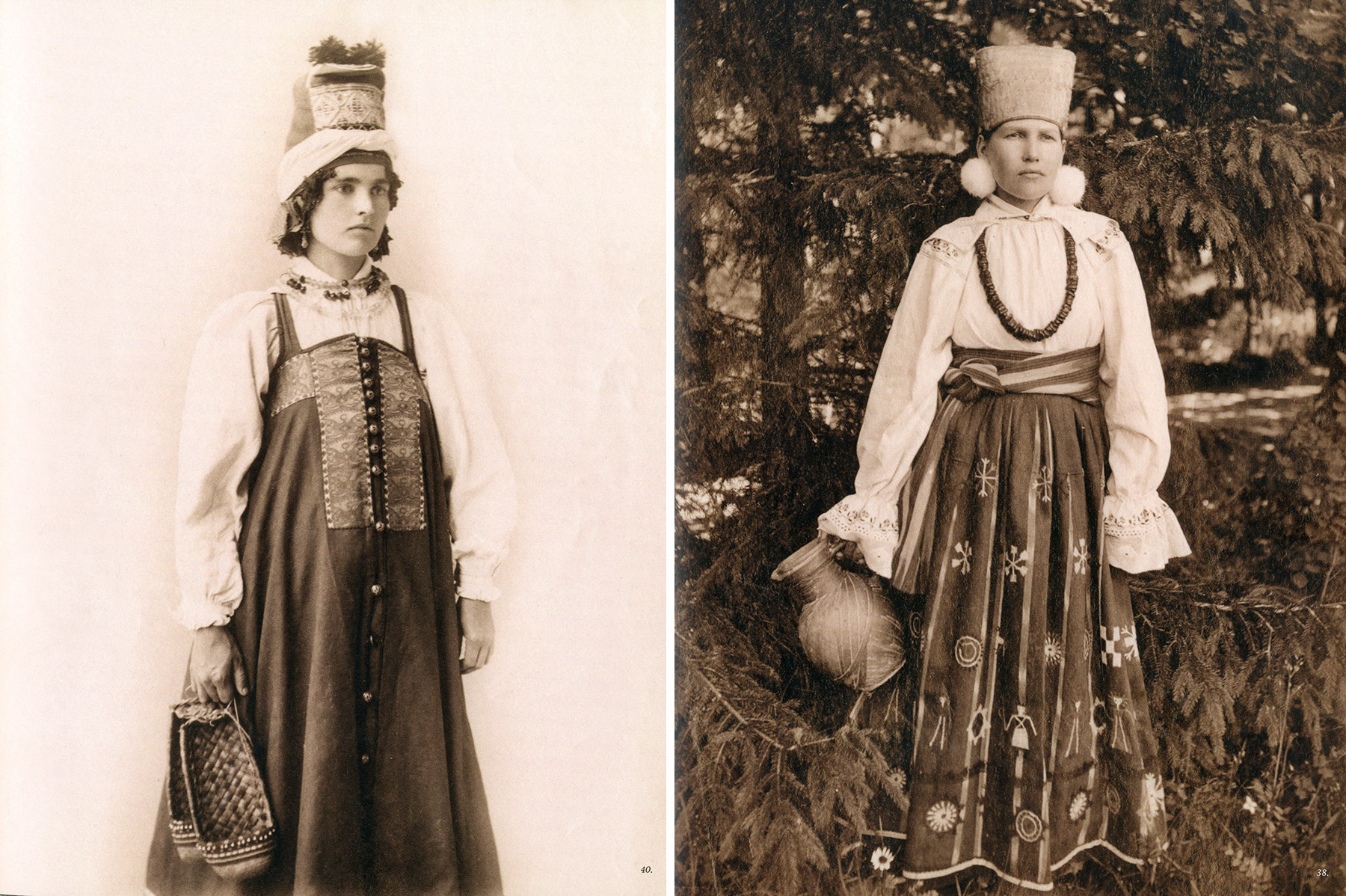 A popular decoration in the south of Russia was "cannons", as in the photo on the right. Round balls of goose down were usually attached to a headdress. Incidentally, headdresses in the south were often soft and did not have a hard element on the forehead, as in the north. 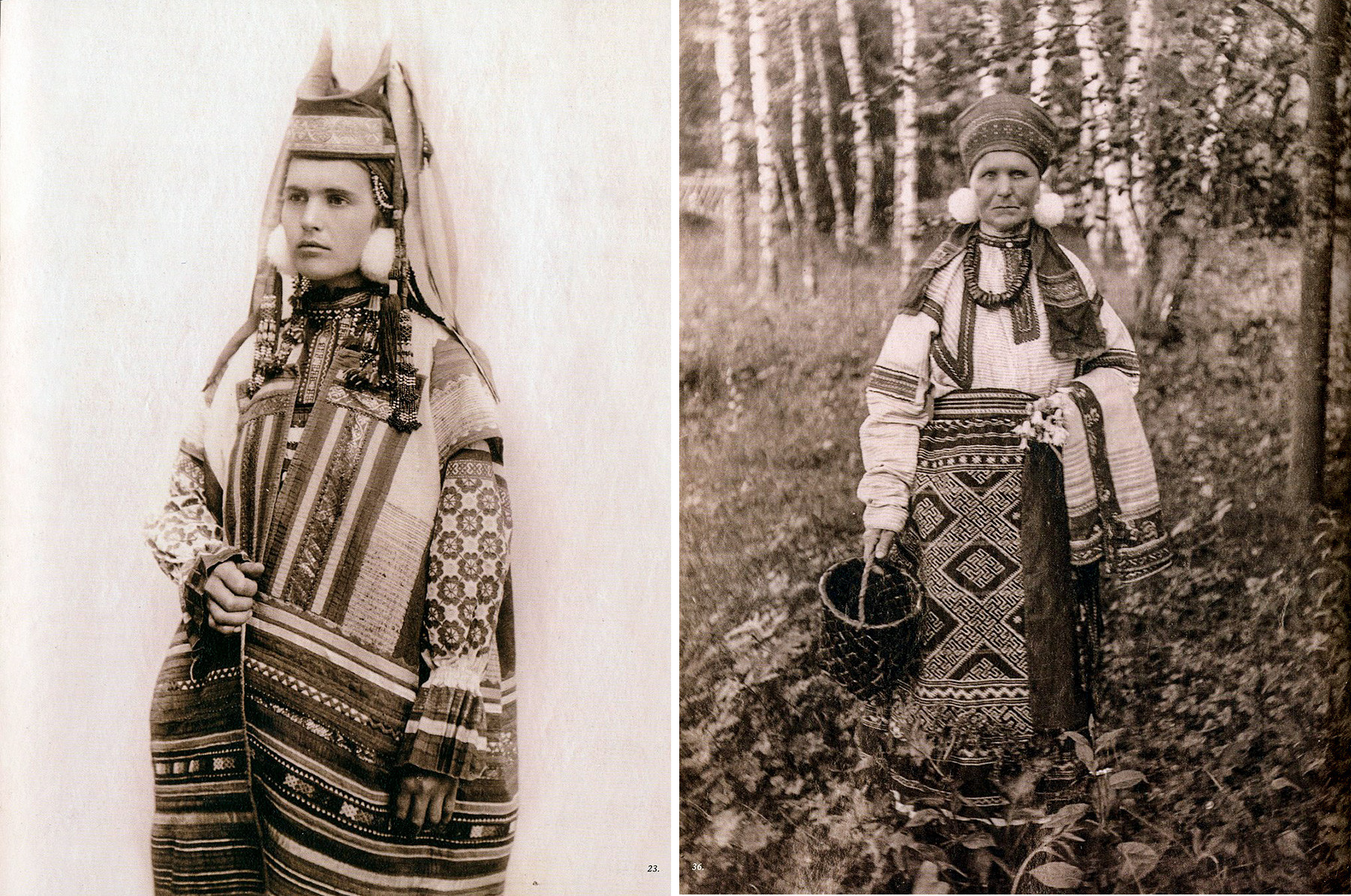 A distinctive feature of a costume for married women was a kichka kokoshnik in the form of horns, as in the photo on the left. This headgear was also found in central Russia. The horns were meant to protect the woman from evil spirits, and also symbolized her youth and ability to bear children.