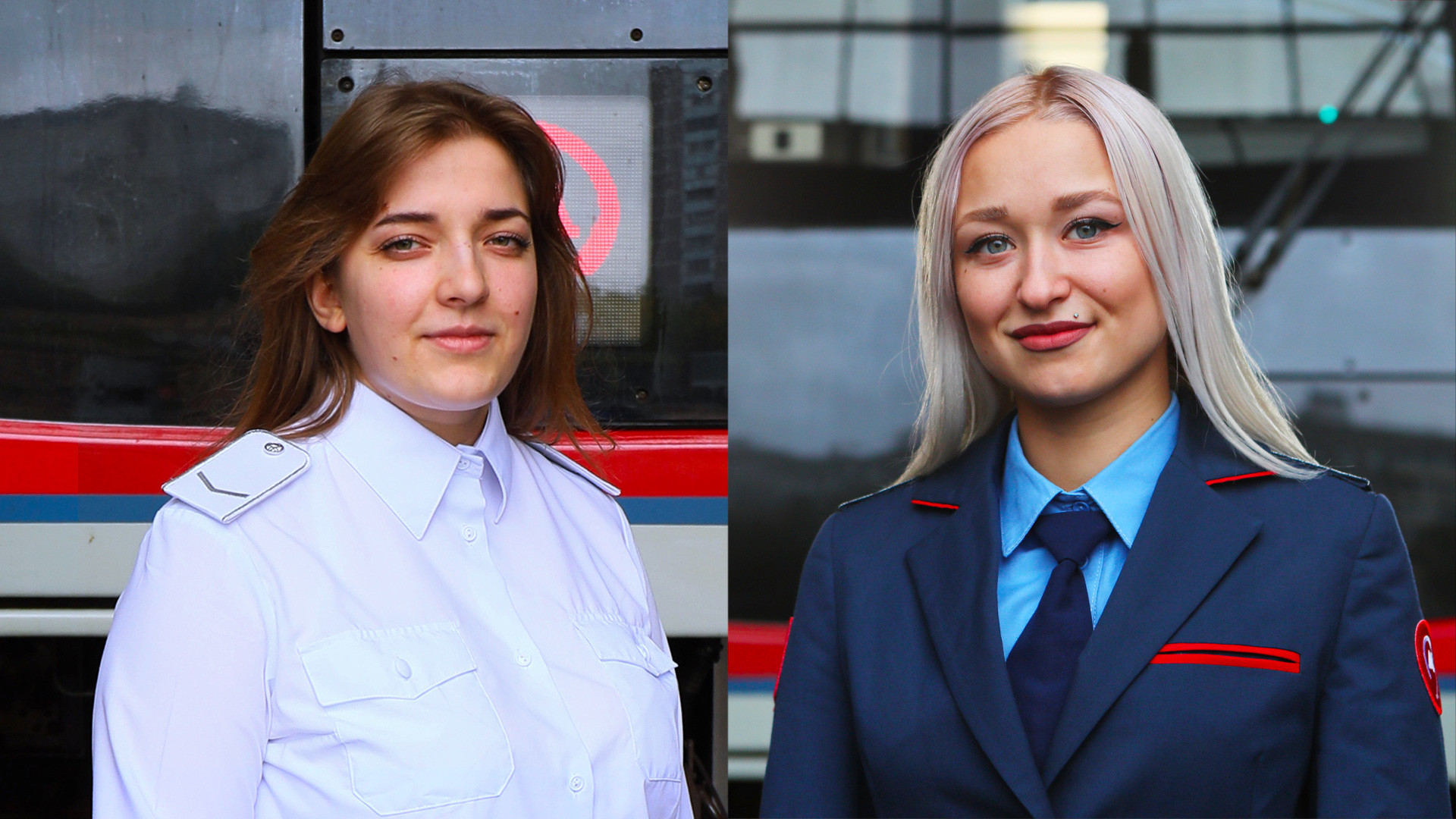 A. Gerdo, Moscow Metro Press Service
For more than three decades, the profession of metro train driver was off-limits to women in Russia. However, in January 2021, 12 of them got the job at the Moscow Metro, but the everyday grind proved much tougher than they’d imagined.

“They interviewed me very often, it was all the same, like a broken record. I wanted to get to work as soon as possible. It’s probably going to be more of the same now,” says Olga Buravleva, 24, who operates the Filevskaya line.

It’s not difficult to get her: In order to get the job, the young woman had to pass an interview, a full medical, a nine-month course, a practical and, finally, several exams (with one of them even attended by Moscow mayor Sergey Sobyanin). 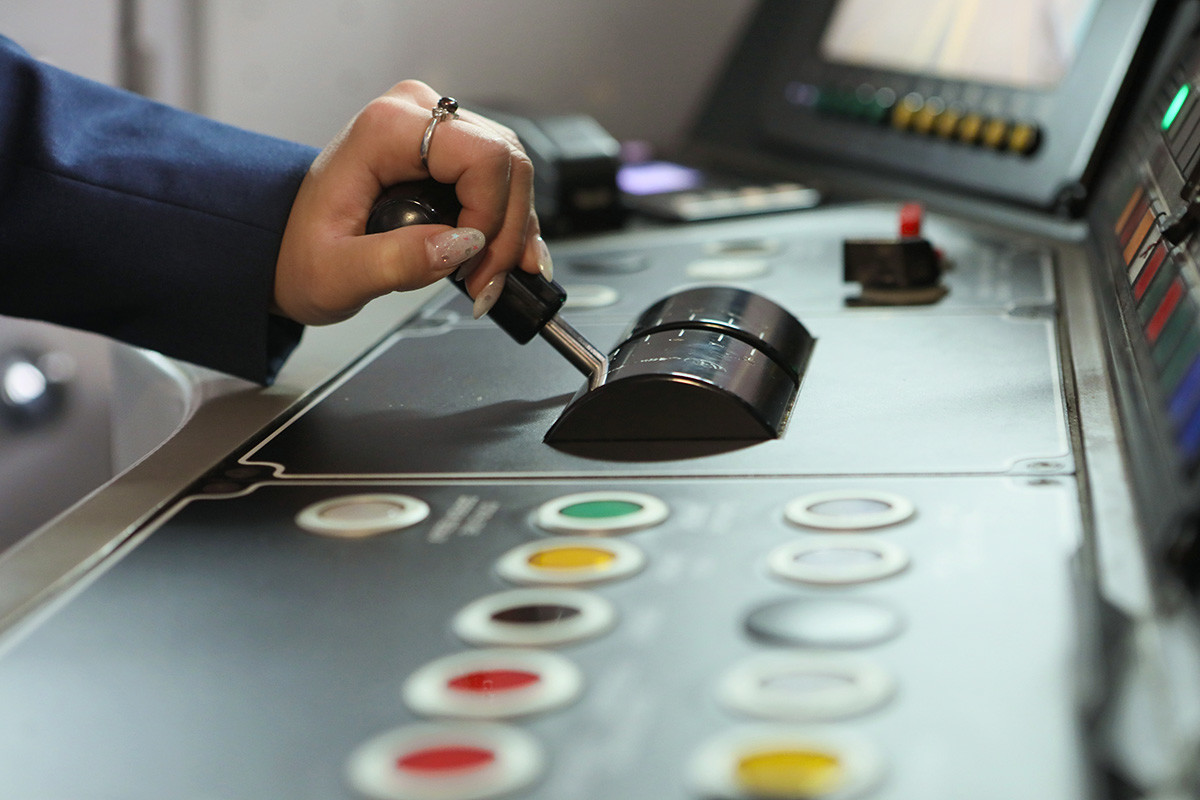 And there would be no buzz, were it not for the long-standing ban on female subway train drivers, in place until very recently. Women had been operating trains in the Moscow Metro from 1936 until the 1980s, when the USSR put a stop to the practice of hiring female staff, with the profession being deemed too physically demanding.

On January 1, 2021, the Ministry of Labor reversed the official position and 12 women almost immediately started in their new positions as train drivers, with a further 42 currently studying, according to the Moscow Metro’s press office.

Russian media actively began interviewing the young women, Olga among them. Social media, meanwhile, was awash with controversy at the news.

“We’re going back 40 years. This is a case for crying - not celebrating.” “God forbid I get a broad for a driver! Not one foot in the metro ever again!” “Let’s see someone jump onto the tracks and see how she’ll handle scraping them off…”

Such were the comments left by some VK users. Happily, they were not the only kind, with many choosing to celebrate together with the female drivers.

Monotonous tasks and drawing to pass the time

Olga Buravleva began her subway career as an operator six years ago, all the while studying at the Moscow College of Railway Transport, then the Russian University of Transport, where she’s currently in her final year. She used to dream of becoming a flight attendant, but says that Russian airlines wouldn’t accept her because of her tattoos - an official policy.

Olga already had plenty of driver friends, so when they suggested that she apply, she quickly thought: “Why not?”

“I knew a lot about the metro already, the job was clear. But that it would be difficult was immediately clear,” Buravleva remembers. 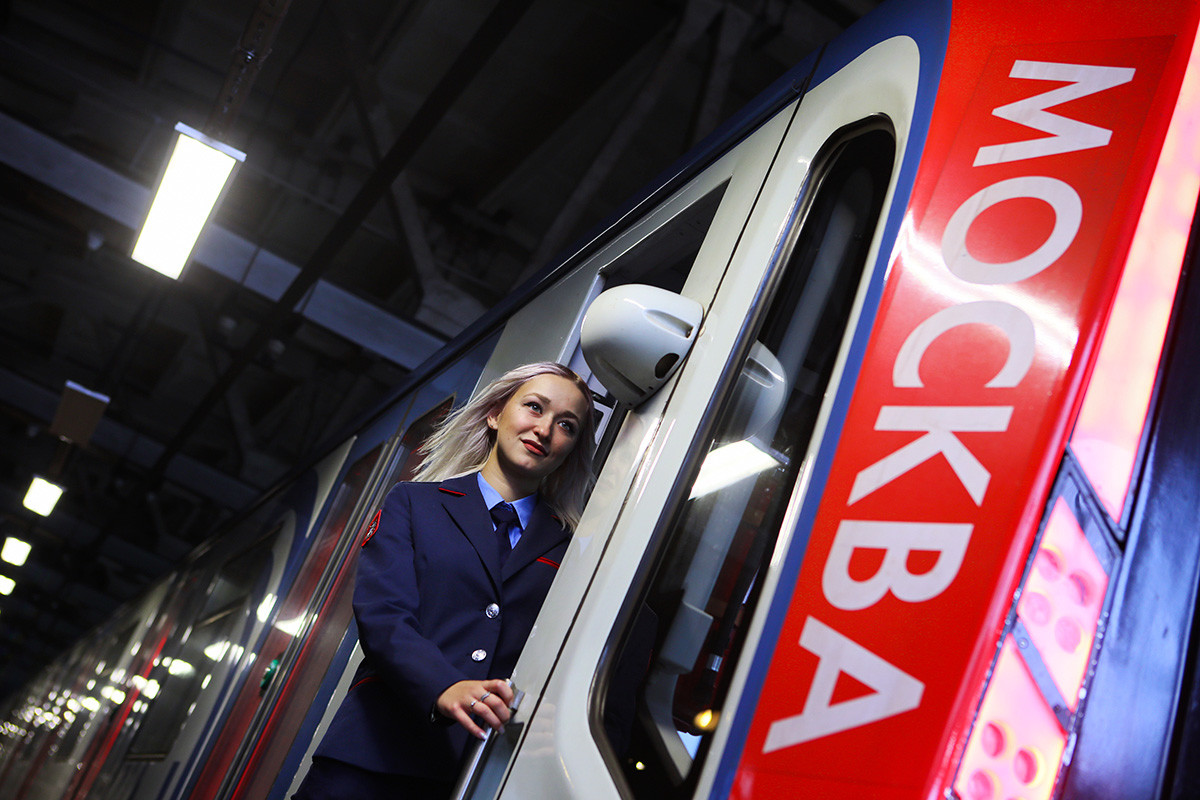 First, all train drivers have to pass an interview. This is followed by a psychological, then physical examination. After that, there’s a two-week trial period, where prospective candidates learn the role of assistant-driver, which teaches them the way the carriages and equipment work, as well as safety skills and the handling of emergency situations. This is followed by another several months of driving practice and the exams that go with it - and only after all that has been completed can they start operating a metro train. The students receive a monthly stipend of 26,000 rubles (approx. $357). They can choose to expand their skill set after qualifying.

“We were closely monitored by Metro management, even visited by Sobyanin and Liksutov [the Minister of Transport]... During our studies, we got to drive a simulator, based around the old ‘Moscow’ train, but it was a toy and I was eager to know what the real thing felt like,” Buravleva remembers. 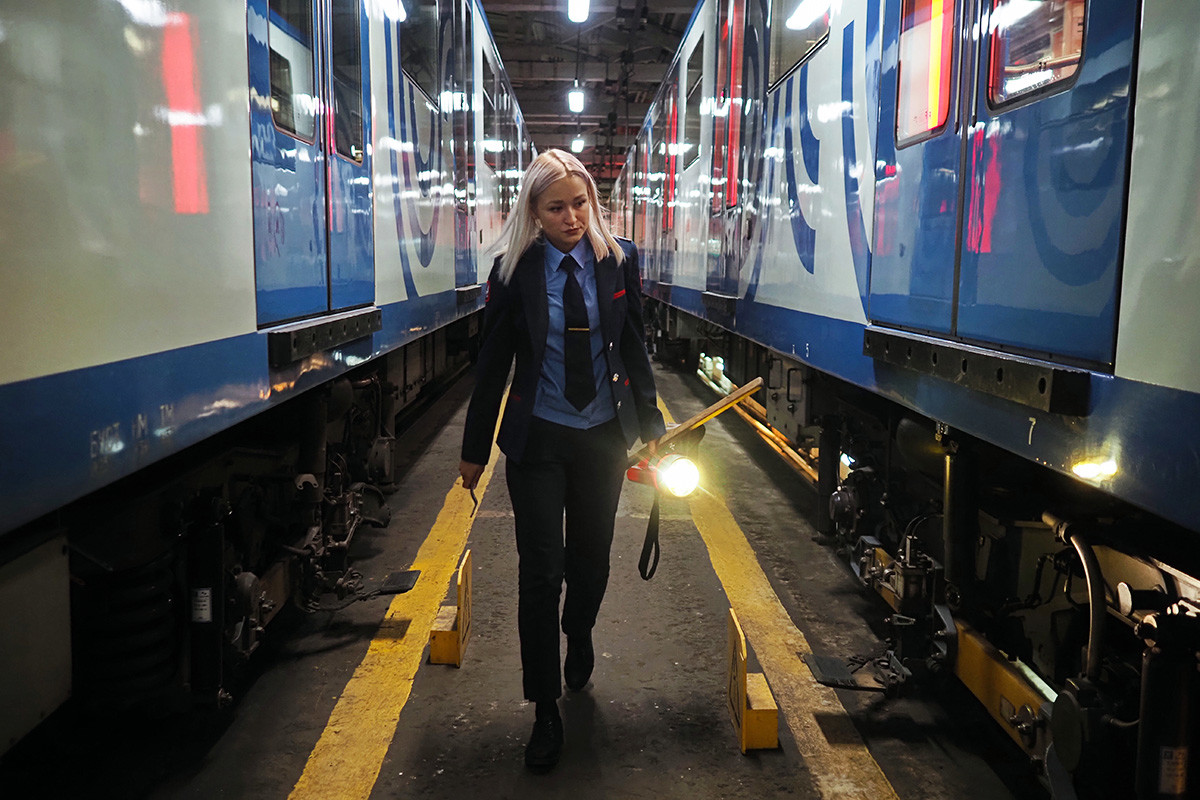 “These are their opinions, they’re welcome to think what they want. I had an aim and I achieved it. My life isn’t going to change because some guy calls me a bimbo and tells me that this isn’t the place for me.”

The toughest part about the job for Olga are the non-standard working hours. Her day starts at 6:00 AM. She spends an hour and a half getting to her workplace, then spends 20 minutes receiving a medical checkup and goes over the rules and regulations one last time before her shift. 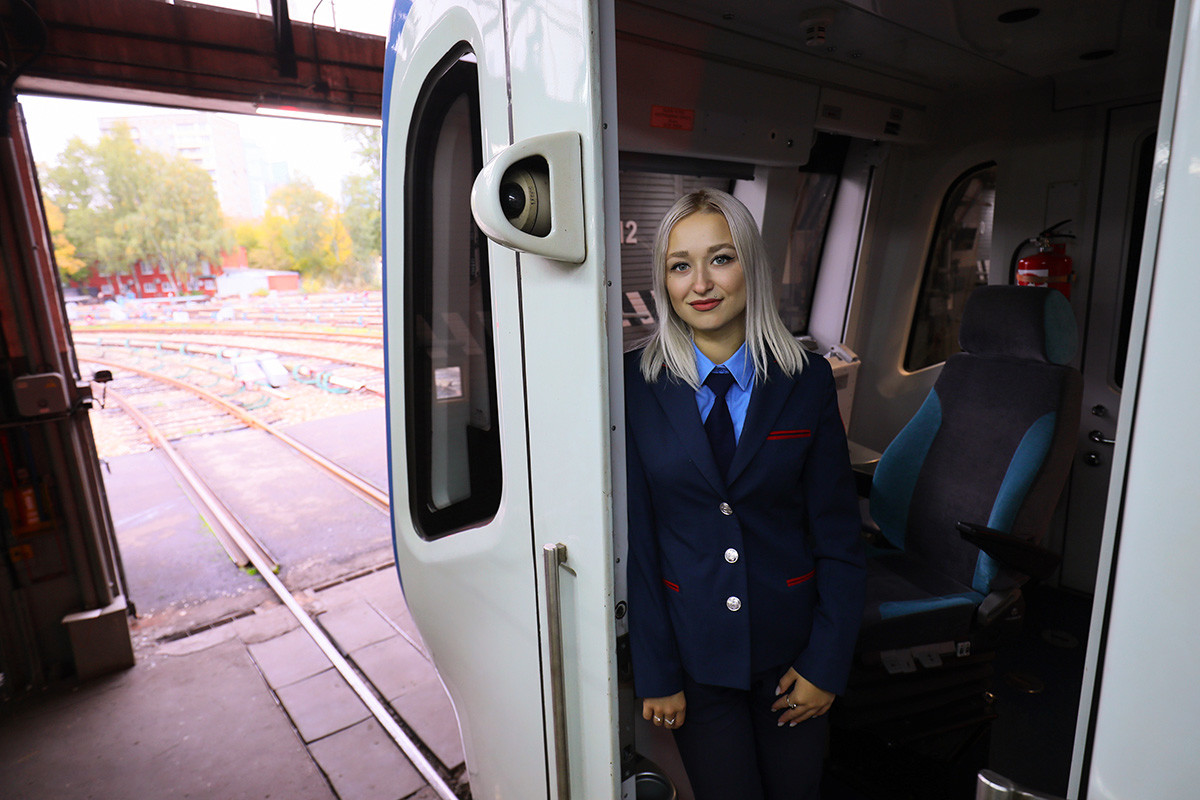 “It’s a monotonous job, of course. There are times when you’re traveling home all sleepy and think: ‘When will I finally get home?’ Other days, you get nice weather, birds chirping and the shift just flies by. So, it’s all about the mood. And you can never daydream or be in a state of zen, either - everything must be monitored and controlled. It’s always stressful work, since an emergency situation can occur at any moment,” Buravleva says.

In her free time, she likes to hang around the house, do some drawing, perhaps - she says it really helps with taking the edge off after a hard day’s work.

“So, I arrived for my interview, entered the room and there were men everywhere! I was the only woman and everyone was looking at me sideways. And I was also quite scared, as I’d dreamed of becoming a driver for so long and they weren’t accepting of women. I was immediately told that I’d have to study complex machinery. I remember thinking: ‘Darn, OK, I guess, we’ll just wait and see,’” says Anastasia Mamkina, 25, another recently qualified metro train driver.

The woman ended up in the job accidentally: A few years back, she saw an ad about the Moscow Metro looking for male drivers and found herself wanting to be in their place. Her parents, however, wanted her to study accounting, so she did after graduating 9th grade by enrolling into a college. This was followed by a degree in economics. 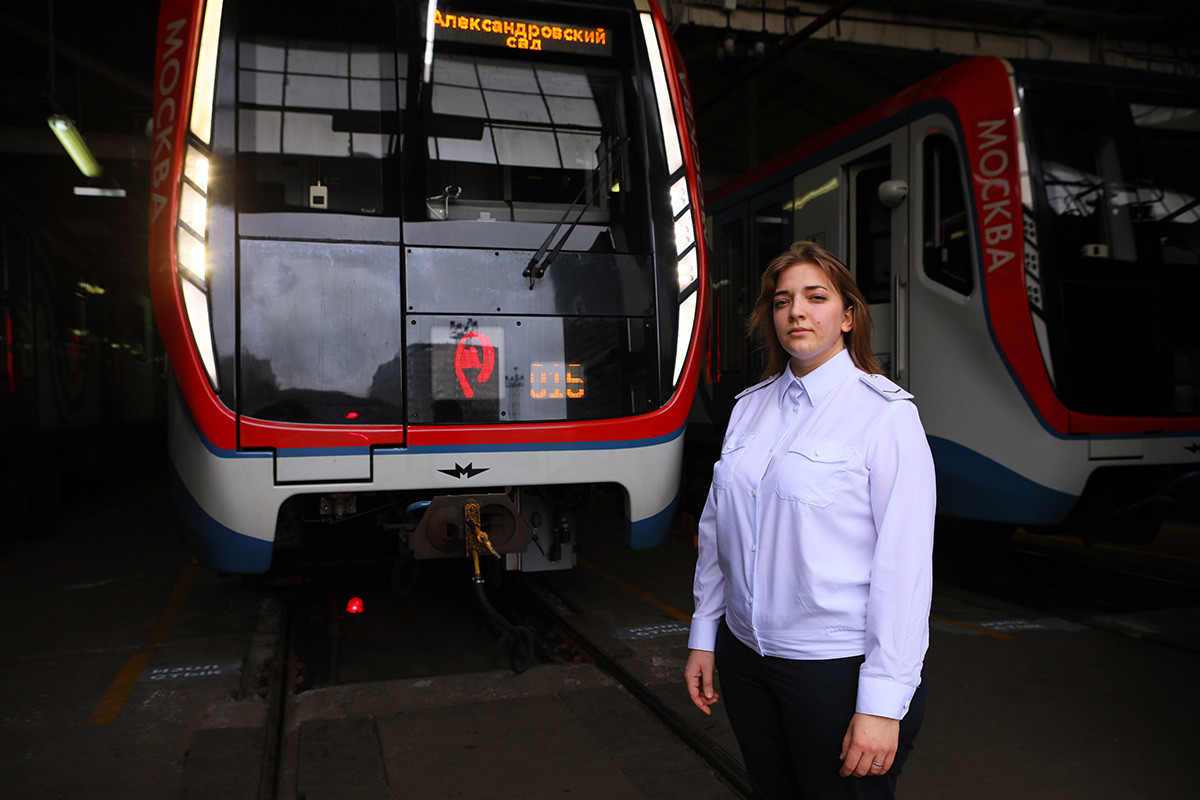 She worked at a store, then as a consultant at a bank, but she never liked working in sales. Going through vacancies online, she came across one that was looking for female train drivers. She immediately sent in her CV and was invited for an interview a mere two hours later.

Anastasia says she heard stories of many women failing to pass even the mental aptitude test.

“There was a lot of button-pressing, which they used to check your reflexes and readiness to engage in monotonous tasks. Those who couldn’t stand it simply left. As for me, I got a false reading on my ECG and was sent for a repeat medical examination. When the doctor finally said the words ‘fit for work’, I was so happy I began to cry, I wanted to get in so badly,” the woman remembers.

A total of 68 people were accepted onto the course, 20 of them women. By the end, there were only 17 people left. And Mamkina was the only woman. 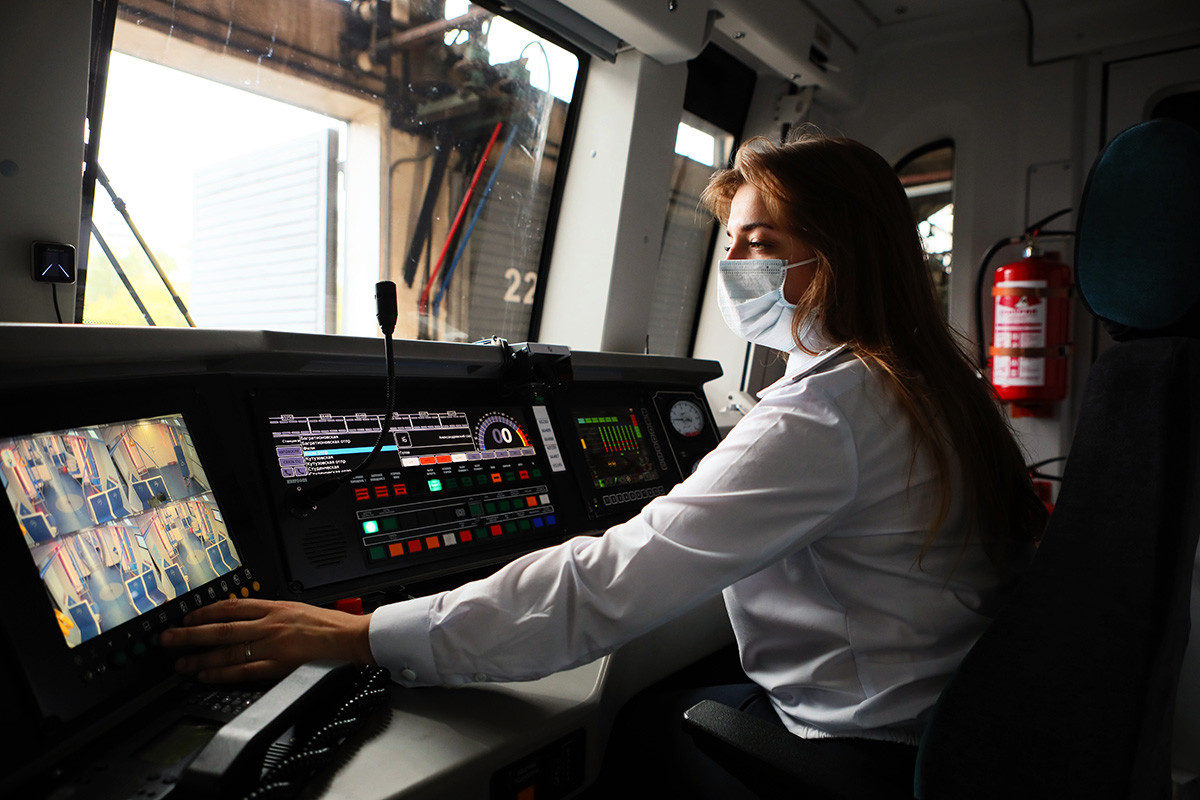 Anastasia says that many weren’t ready to get to grips with complex terminology, or know the train’s mechanisms inside out, as well as study numerous action algorithms, designed for all manner of emergencies. Some students are put off by having to get in shape, which, while not a daily problem by any means, is still a requirement.

“An ordinary day does not require one to get very physical. But you still need to be prepared for any emergencies. For example, the breaks get jammed, or you need to force a lever shut - and they get turned so rarely that they tend to jam up and it’s incredibly hard to do. You’re practically pulling the lever toward your belly with all your might. But this doesn’t occur often,” Anastasia adds.

Mamkina is finishing her training, which will be followed by the practical, then an exam and, finally, her first days as a train driver. She’s already worked as an assistant-driver and is happy to report that her shifts really fly by fast.

“We make our way out of the depot, reach the final station, then turn back - we call this the ‘bagel’, and having done two of them, you can go for a break, maybe have lunch, go outside, read the instructions again, if necessary. Then another two ‘bagels’ and time to go home. Although you need to really make it in time, as every minute and second matters there and you’ll be saying the speed and describing the situation out loud the entire time. It’s difficult, but interesting,” Anastasia says. 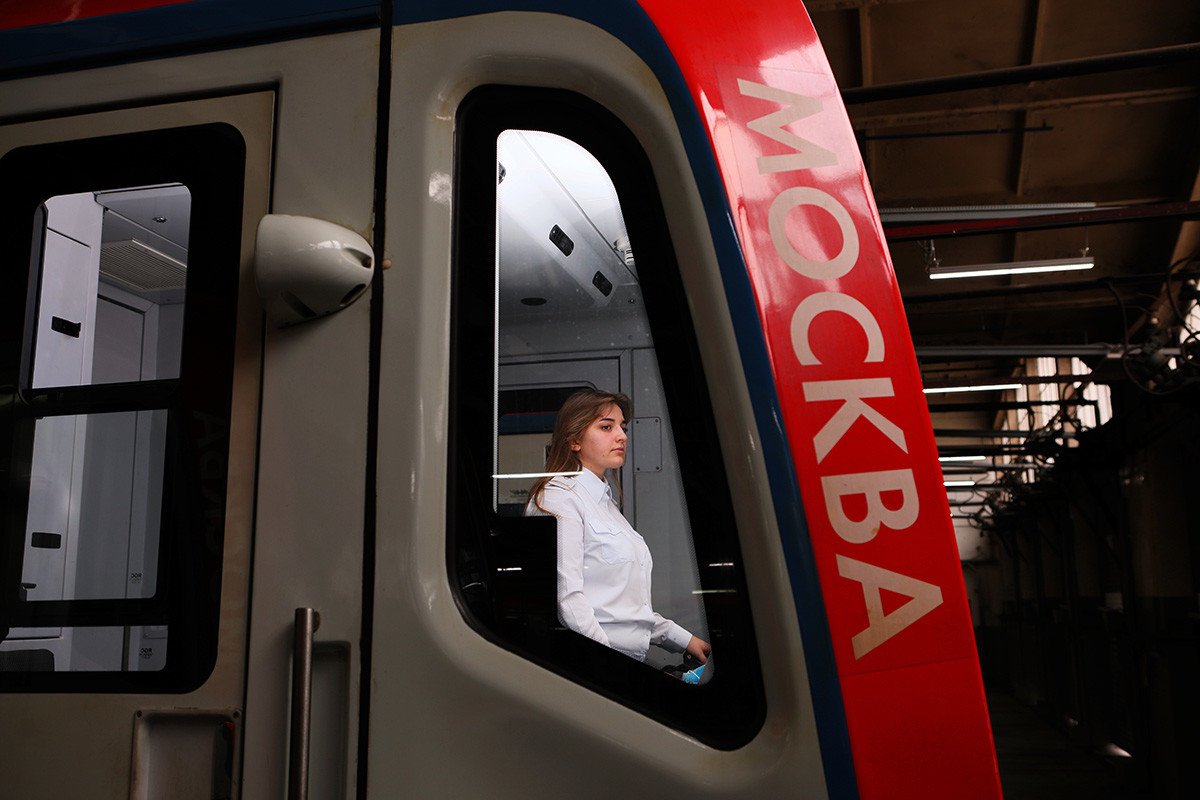 Mamkina noticed that some passengers smile at the sight of her, while others begin to complain - not so much at her personally, but, say, when the doors shut in front of their faces. She’s only experienced negativity toward female drivers online; in real life, people often show an interest in her work and confess that they, too, at one point, dreamed of becoming a metro train driver, but were afraid to fail.

“My mom wanted me to have a different profession, but is listening to my stories today and saying: ‘So that’s why you took apart every alarm clock and flashlight as a child. Well, good luck.’ I try not to dwell on other people’s stereotyping too much. I want to get to work as soon as possible, then qualify for bigger things,” Mamkina sums up.