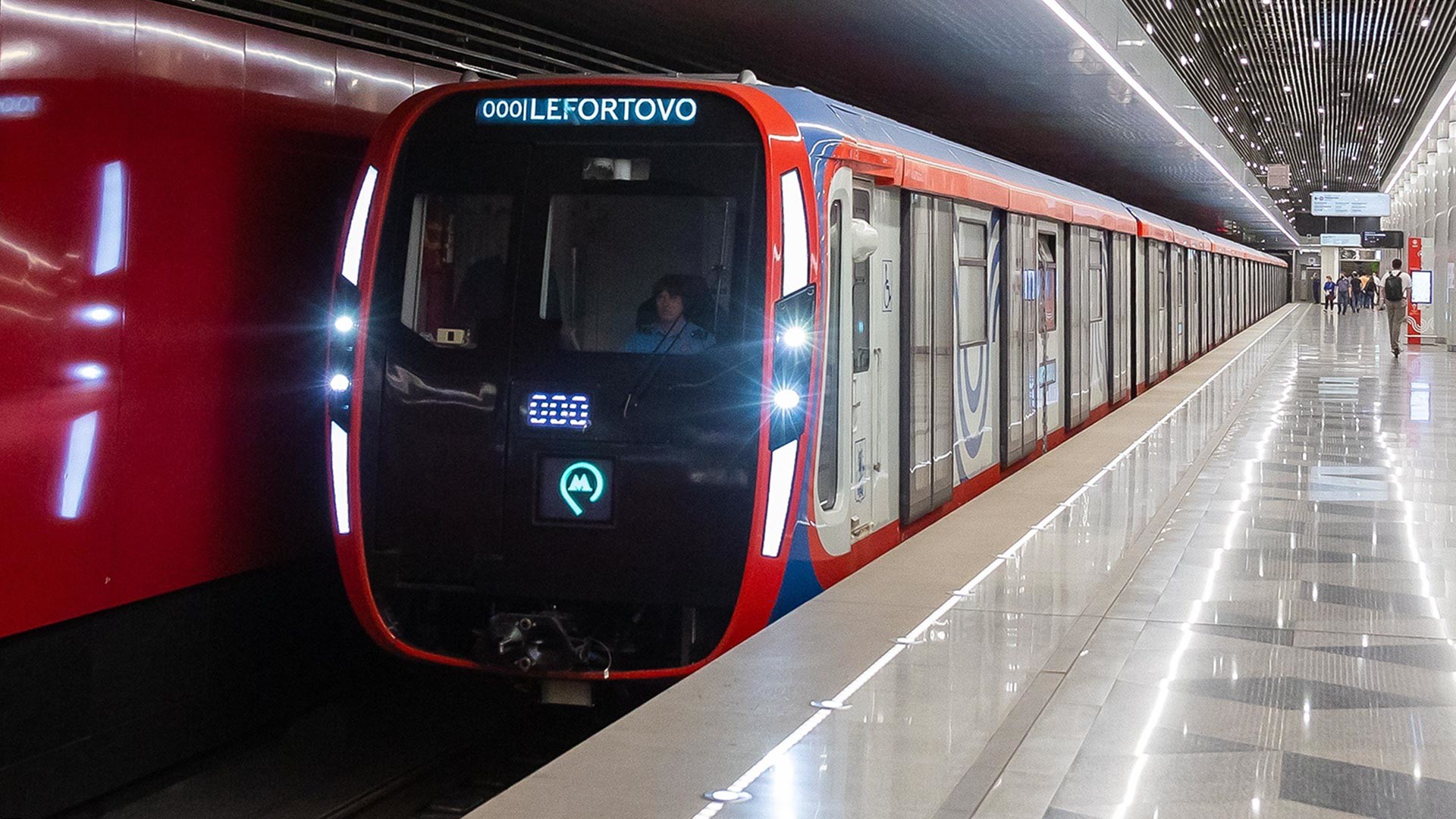 Moskva Agency
The Moscow subway is often described as the most architecturally beautiful in the world. Now it is also one of the most technologically advanced: Moscow subway trains get regularly upgraded to increase passenger comfort and further stimulate the switch from cars to public transport. We investigate the new breed of futuristic trains, complete with USB sockets and “selfie” doors

It’s early May, the end of the working day. Muscovites who have to work during the May holidays stare with downcast eyes at the subway platform. Soon the train rolls up. But instead of the usual gray-and-blue carriages, a red-and-black monster with wide, darkened windows appears before them, as if from the pages of a sci-fi comic book. The front of the train bears the words “This is Moskva-2020”, and each of the doors displays its main advantages: Convenience, Technology, Care, etc. The name of the next station is shown above the windows. 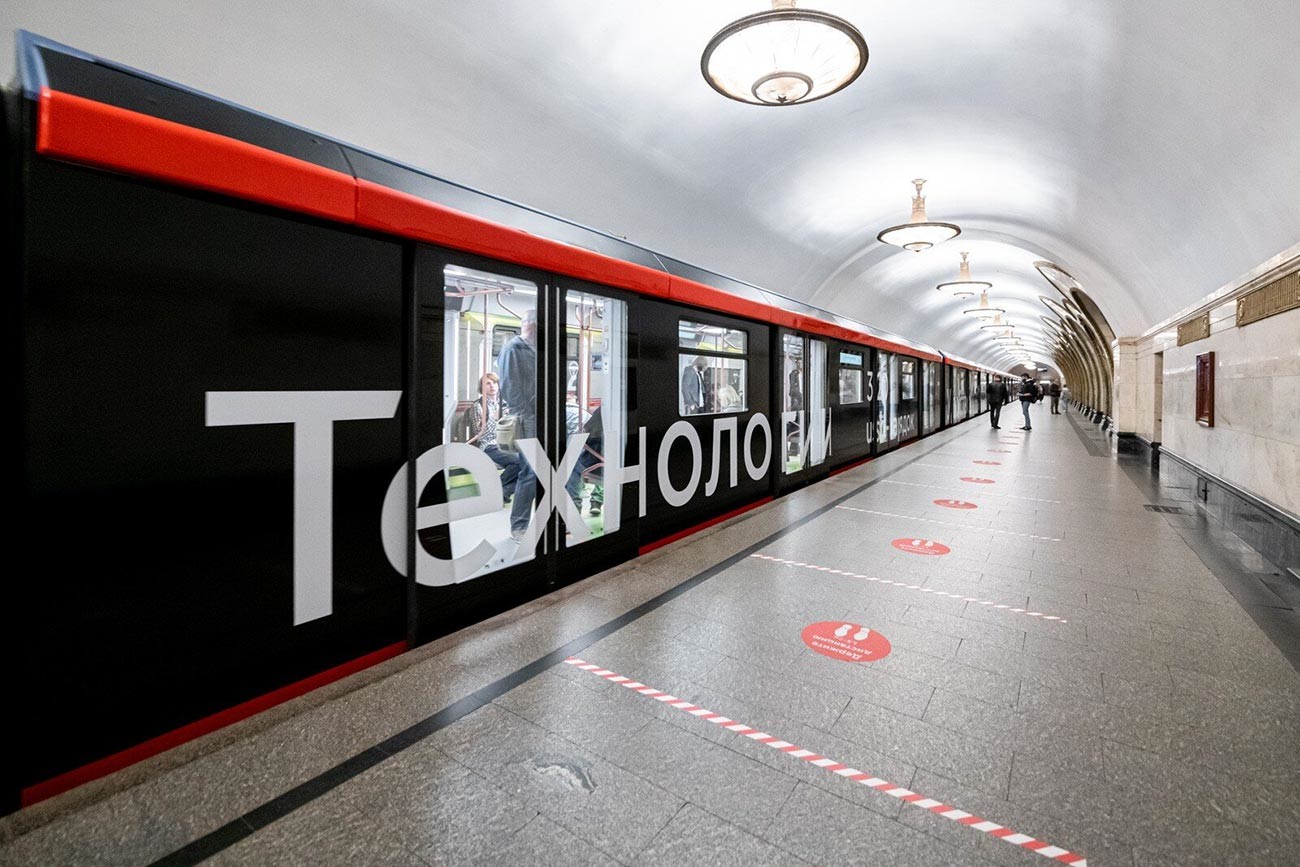 This is what the new Moskva-2020, built by the Oktyabrsky Railcar Factory in St. Petersburg and the Metrovagonmash Factory near Moscow, and launched on the Koltsevaya (Circle) line in the fall of 2020, looks like. The design was developed by Italian company ItalDesign, which also works with Audi, Airbus, McLaren and Lamborghini. 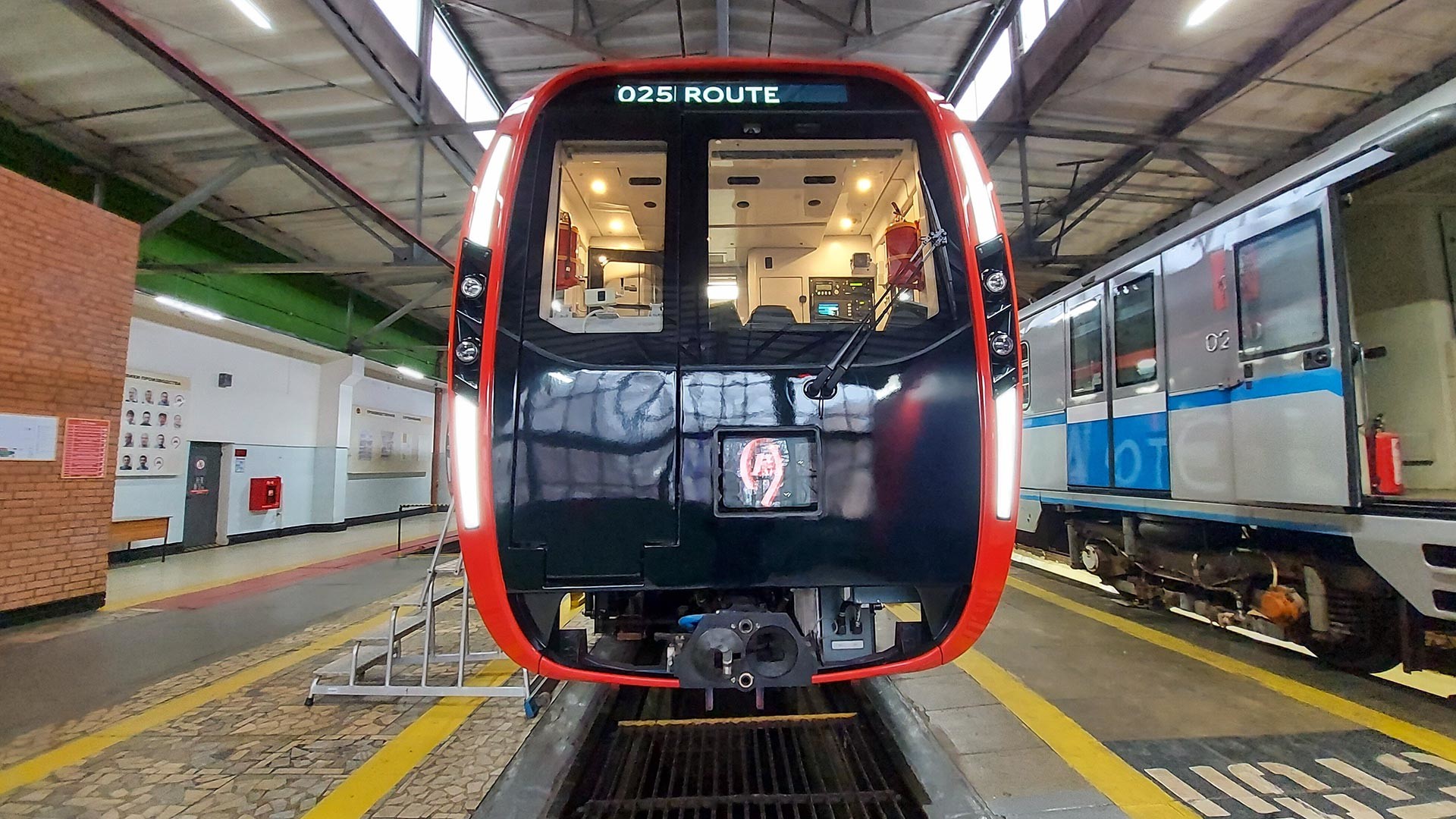 The austere appearance gives the impression that stormtroopers are about to burst forth from the carriage... But when the doors slide open, instead of space marines, you are greeted by a comfortable well-lit compartment. 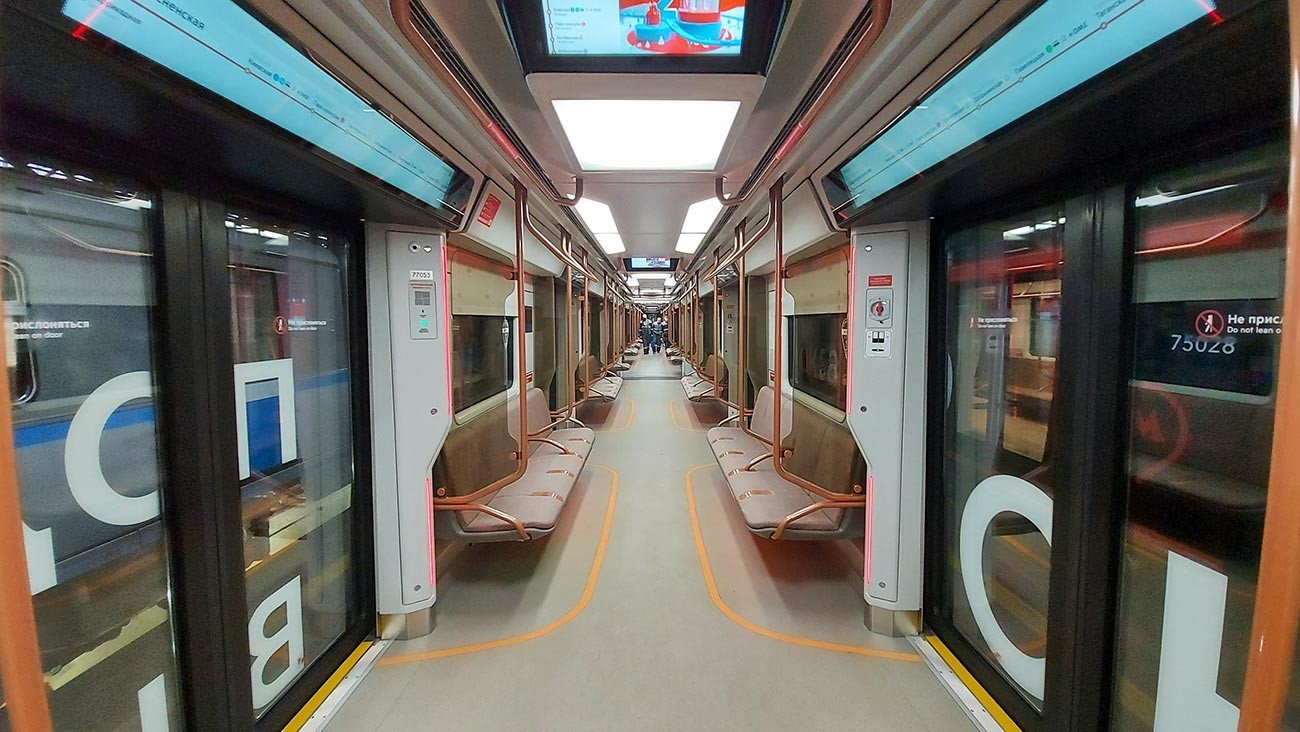 The handrails and soft seats (only five places per bench instead of the usual six) are a rose-gold color, as described on the website of the Moscow Mayor’s Office, and embossed in fine print on each seat is a capital M, the symbol of the Moscow subway.

At the end of each carriage are two more seats on one side, and a fabric-upholstered wall panel on the other, for passengers to lean on. 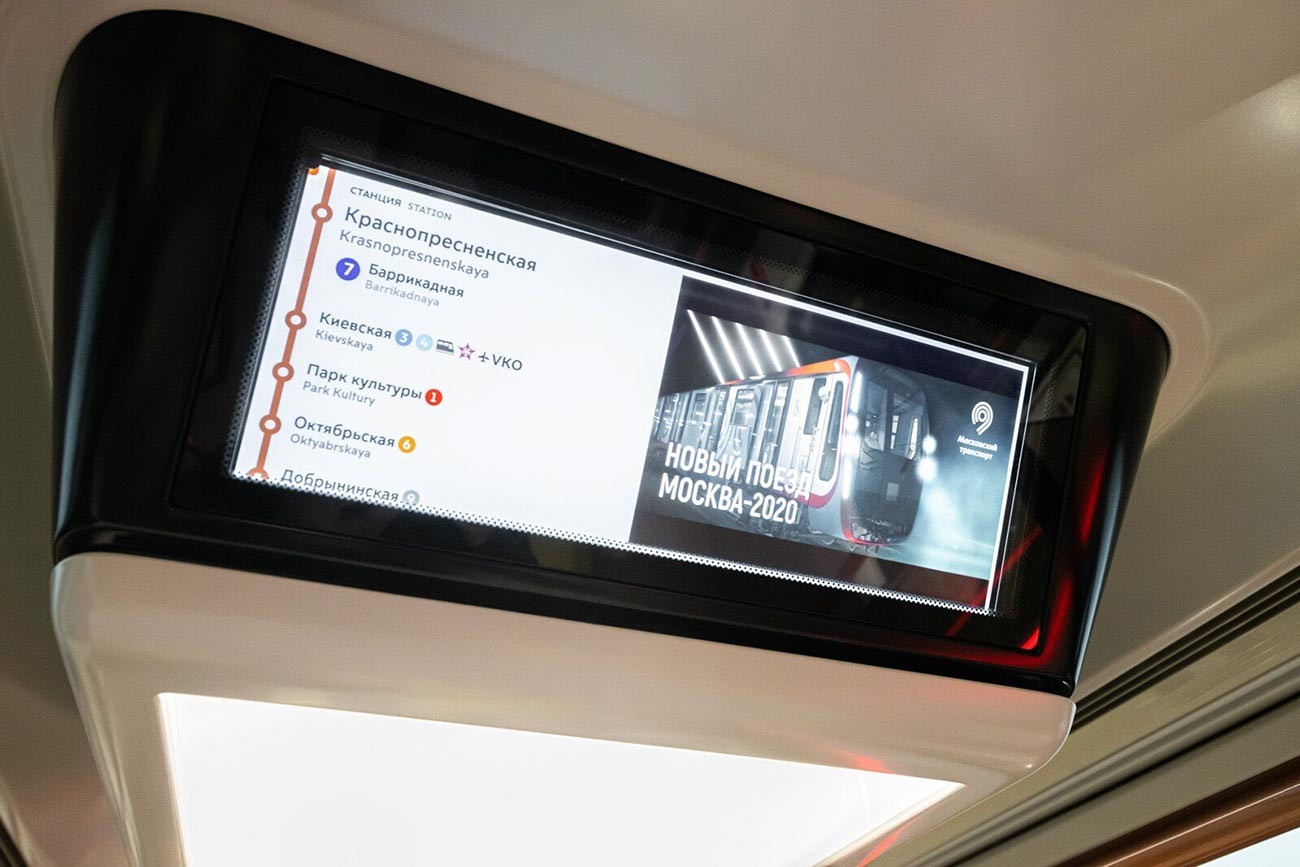 But the biggest quantum leap is the availability of two USB ports per place, even the standing ones at the rear of the car. 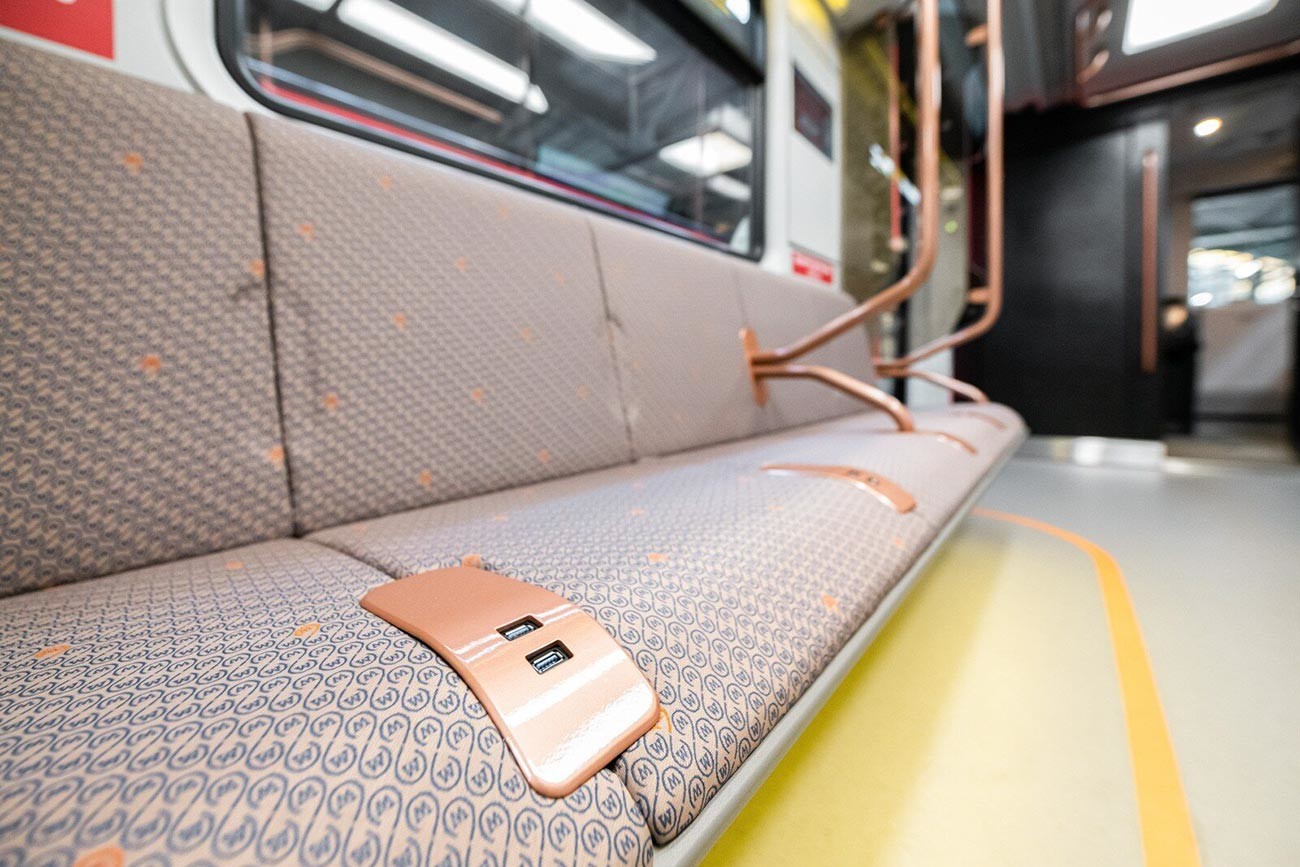 What surprised me was the minimal advertising. Sure, there’s a small display above each row of seats, but during my trip along the Koltsevaya line, it showed only informational messages about the temporary closure of various stations. All the same, that doesn’t mean commercials won’t be appearing at a later date. In addition, touchscreens offer an interactive map to get directions to your desired station. 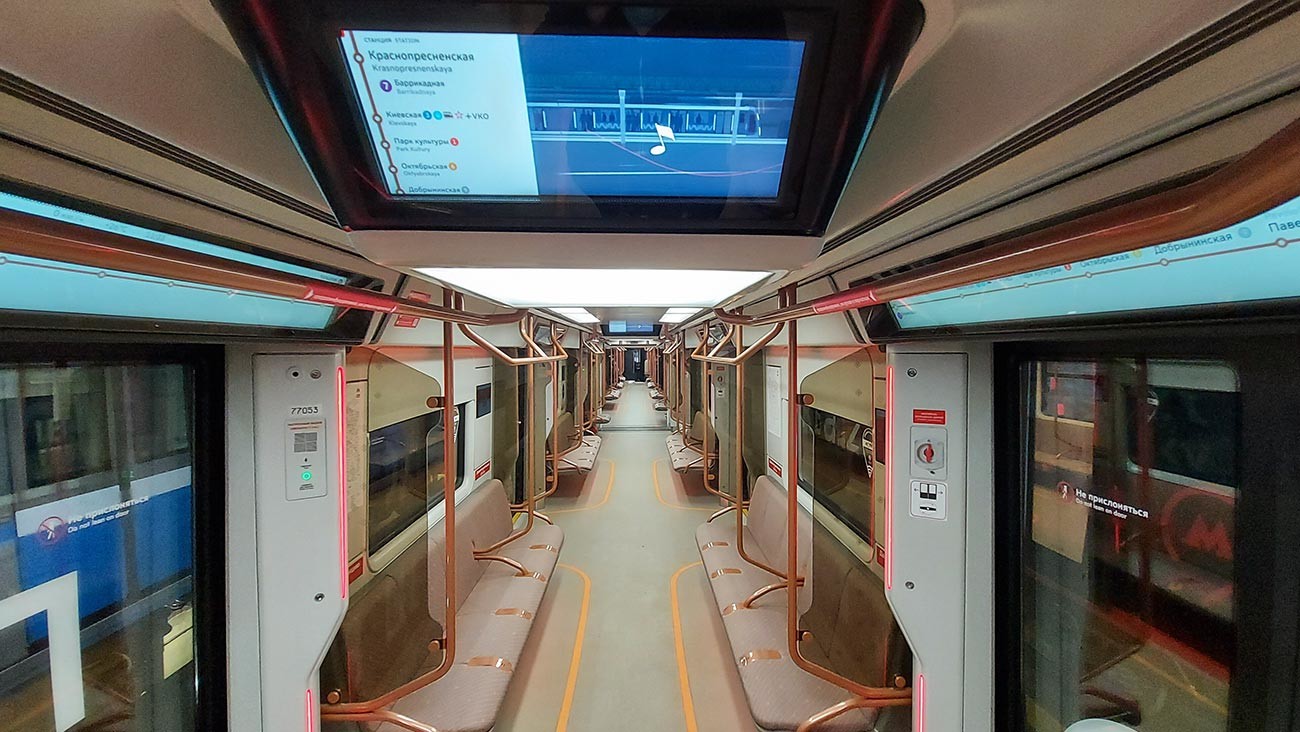 There are also small display panels located right under the ceiling, giving information about stops. The same goes for the doors — the screens above them let it be known when they are about to close.

Info messages even appear on some handrails, albeit in the form of stickers: they report that the handrails, like the air inside the railcar, have been disinfected, but gloves (and masks) are still advisable. Although the mask-and-glove regime on Moscow public transport has not yet been officially lifted, you wouldn’t know it by looking at most of the passengers. 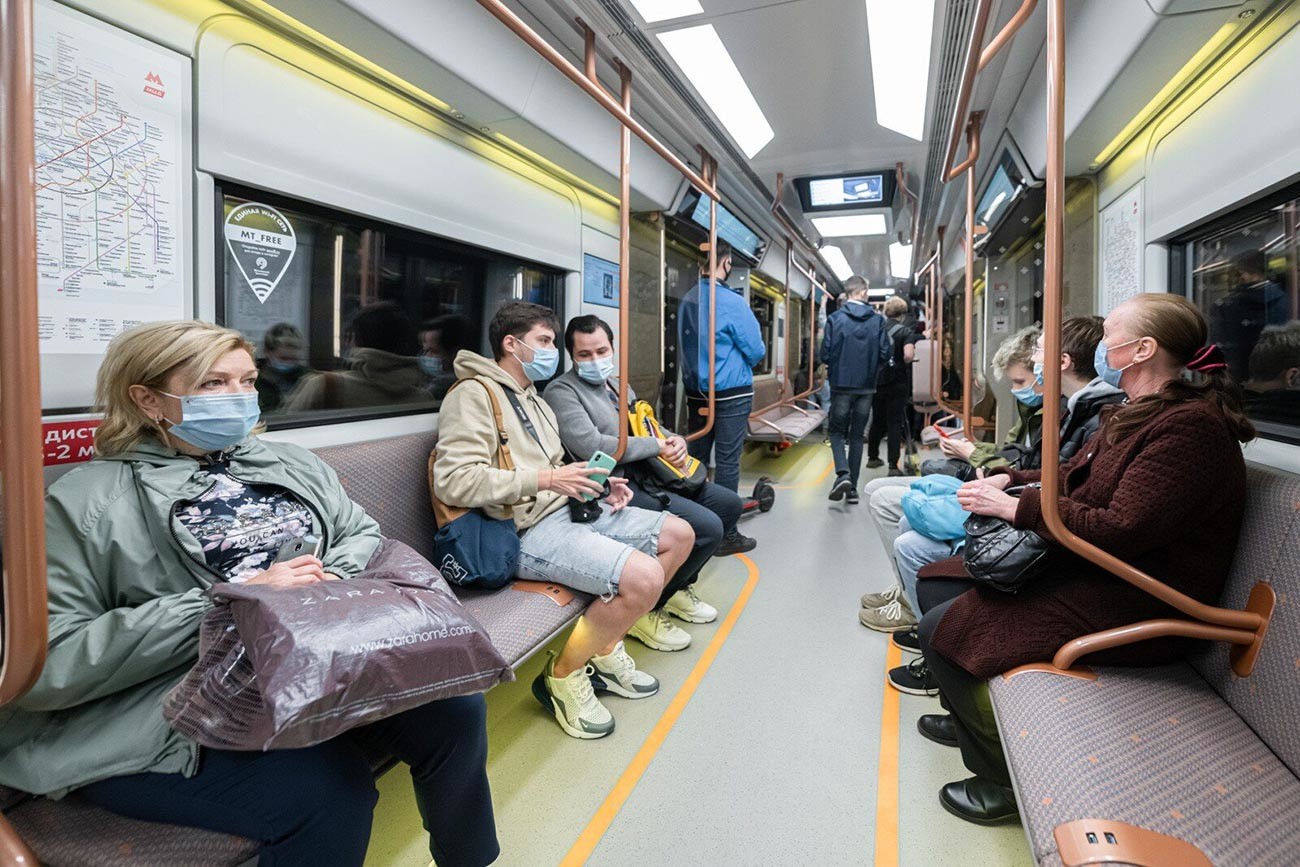 Another major advantage is the transparent screens that separate the seating area from the entrance so that anyone who didn’t get a seat can safely lean back without touching another passenger.

The website of the Moscow Mayor's Office additionally states that the gangways are 57% wider — from 102 to 160 cm. In a half-empty carriage, the difference is imperceptible, but it will certainly be felt during the morning rush hour. 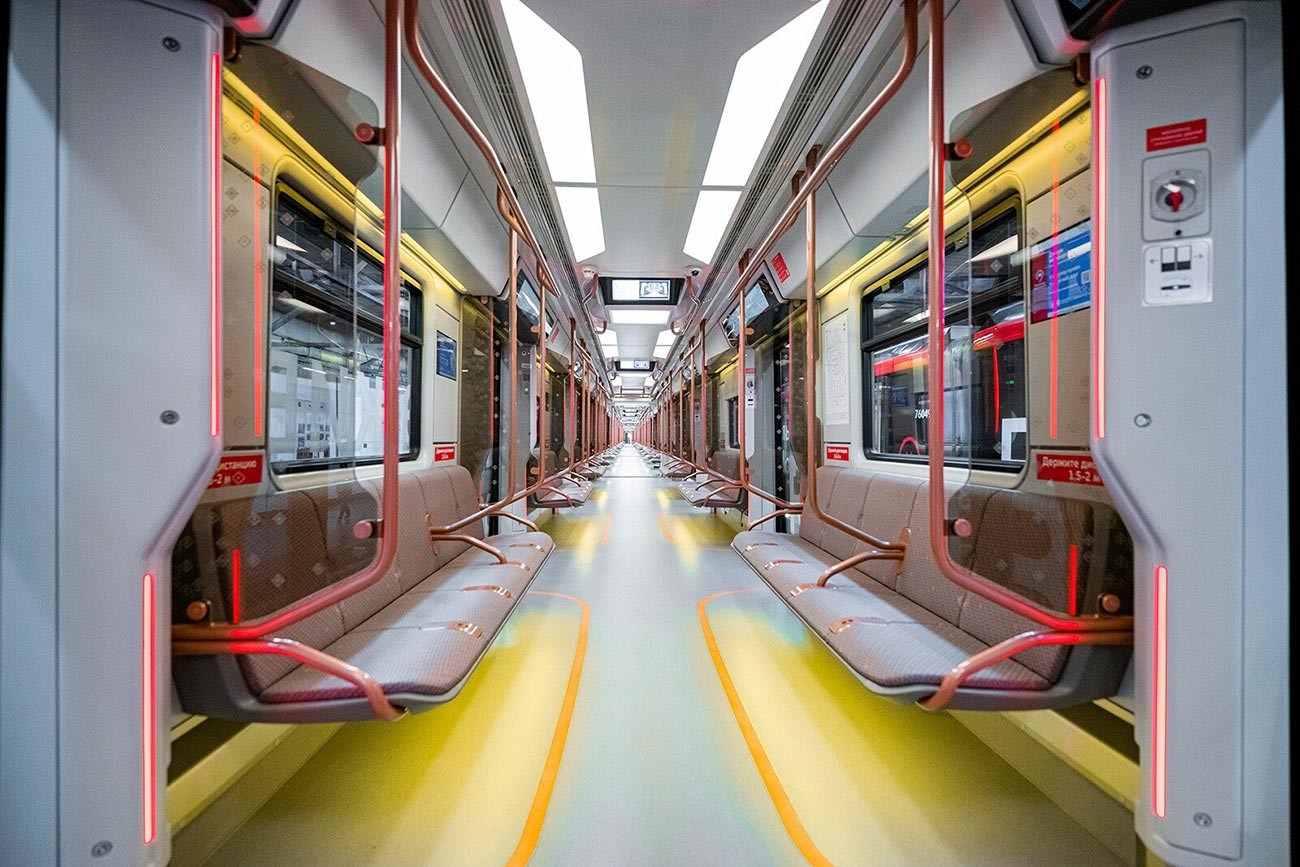 Another claim from the manufacturers is that the train is 15% quieter. This is most likely true: during the ride, I could clearly hear the soft conversation of the people sitting opposite me (and my hearing is mediocre at best, shall we say).

When the time came to exit, I noticed another sticker on the door saying that the doors themselves are 28% wider than on the previous generation  Rusich rolling stock. Door width is another parameter that can only be judged at rush hour, but when leaving the carriage you do notice how much better and brighter the reflection in the door is — perfect for a selfie. If they cleaned the doors more often, they wouldn’t be able to fight off the Instagrammers and TikTokers. 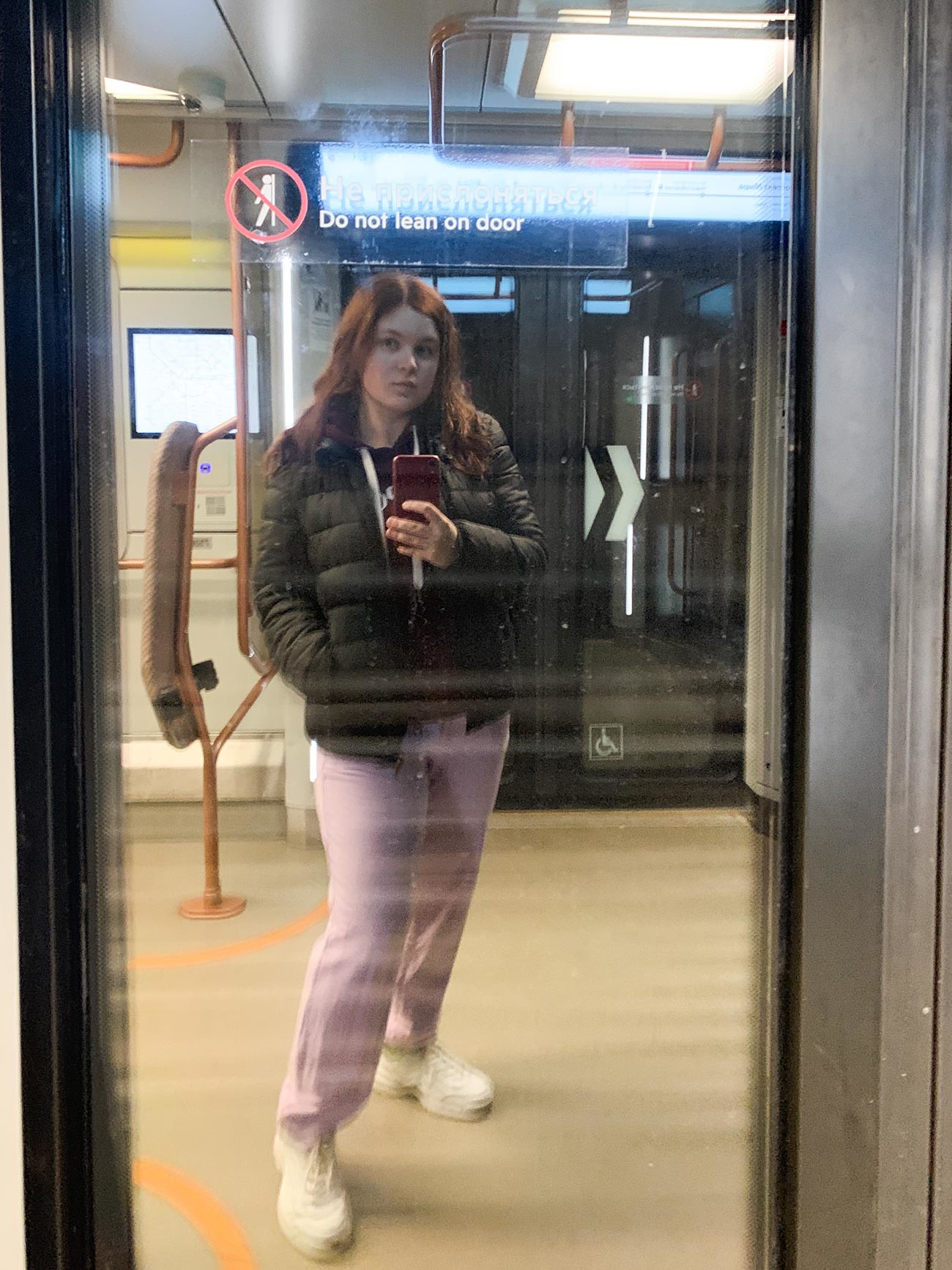 However, Muscovites are not overly impressionable people: none of my fellow passengers even bothered to examine the new carriage, everyone was engrossed in their phone. Only one man, glancing at me, grumbled in a thick accent: “Why are you taking pictures?” Then, having left the carriage at the same stop as me, he gazed down the track for 10 seconds as Convenience, Technology and Care pulled away.