Rave wake and Stalin’s speech: the most unusual events in the Moscow Metro 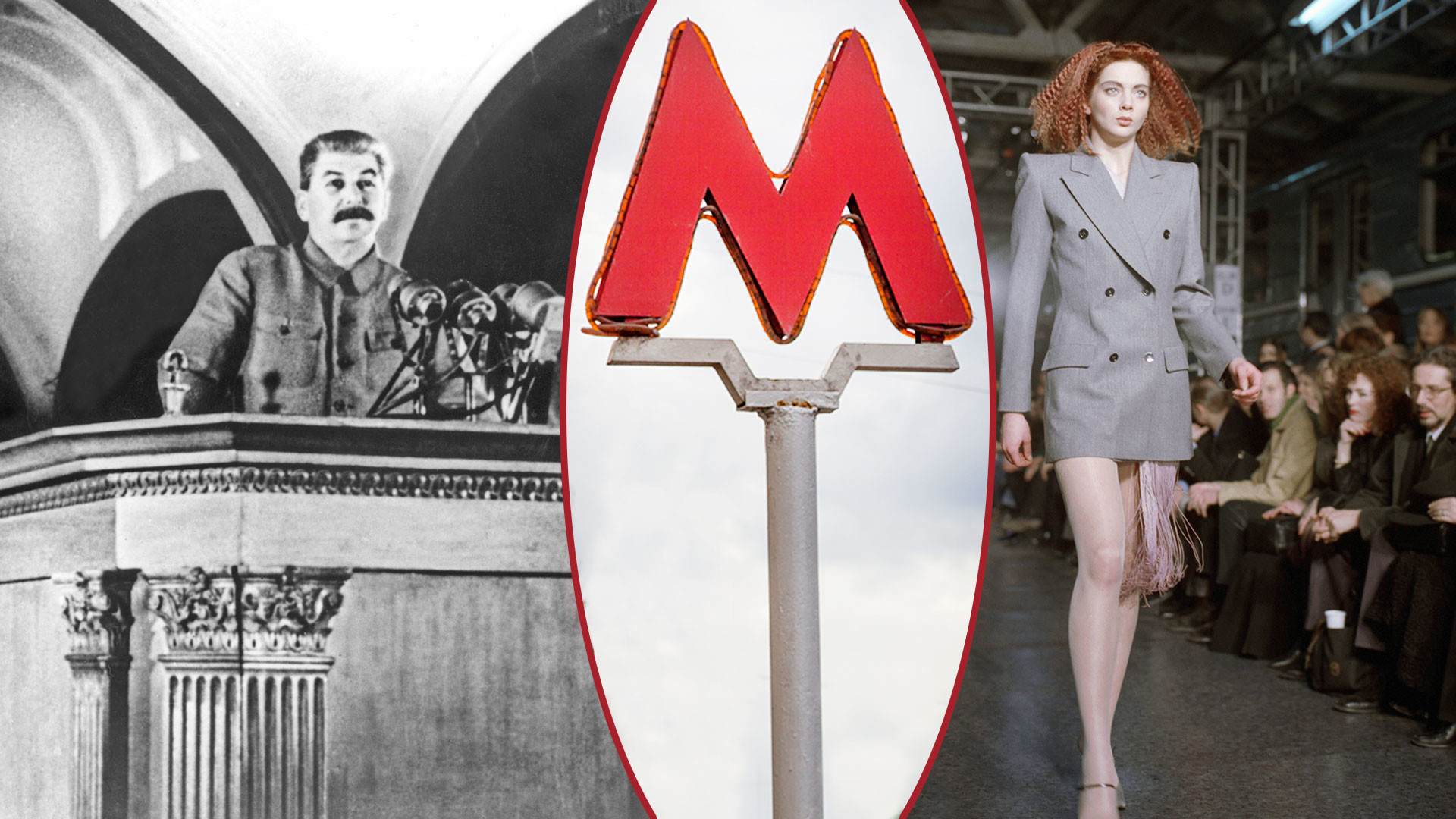 Sputnik; Olga Shveitser/TASS; Legion Media
Throughout its 85-year existence, the Moscow Metro has not only carried passengers, but served as a dance floor, a catwalk, a library and even a maternity ward. We tell about the most interesting events that have taken place deep under the Russian capital.

"I stop by almost daily. Not because this station’s on the way home, but to have time to read newspapers and other literature... The only drawbacks are the circulating air from the moving trains and the continuous flow of passengers,” civil engineer Bogdanov (first name unknown) described Kurskaya metro station in the first year of the Great Patriotic War. 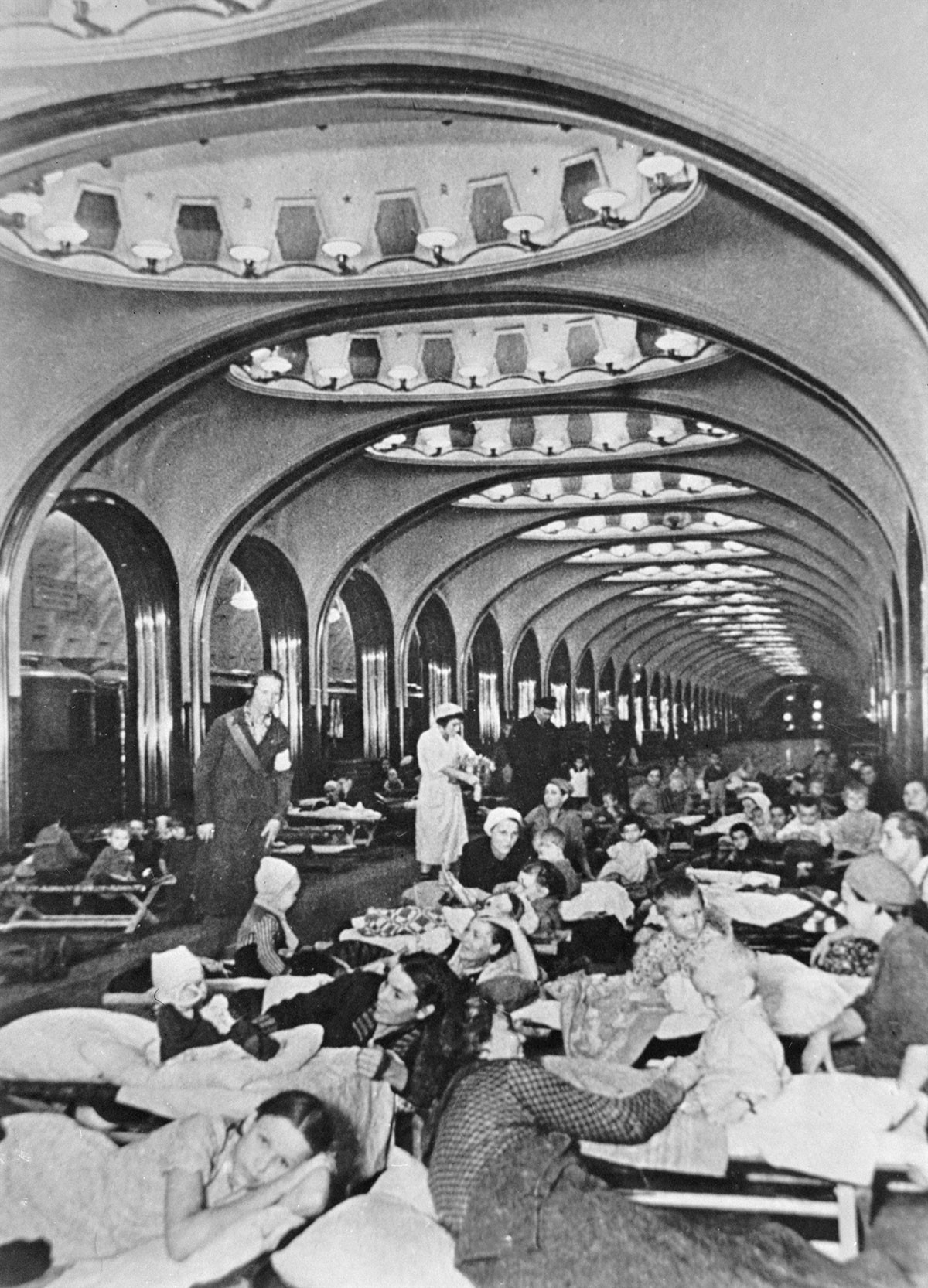 By the time the war came to the Soviet Union in 1941, three metro lines had been built. During the bombing of Moscow, residents sought shelter there. It’s hard to imagine now, but during the war the Metro operated 24/7 — trains carried passengers by day, and stations became shelters by night.

The stations were equipped with toilets and water fountains, as well as loungers and cots for people and babies to sleep in. Women with infants, the elderly and the disabled spent the night in carriages, according to historical documents available on the website of the mayor of Moscow.

Speech by I. Stalin with a report dedicated to the 24th anniversary of the VOSR at the solemn meeting of the Moscow City Council. Mayakovskaya metro station, November 6, 1941

In some stations, people received medical treatment, including the delivery of babies; shops and hairdressers also operated. Children were given DIY lessons and taught how to sew and draw; while film screenings, concerts and historical exhibitions were organized for adults.

Even Stalin himself descended there on November 6, 1941, to deliver a speech at Mayakovskaya station before the Moscow City Council of Deputies. In preparation for his arrival, the floor was carpeted and a rostrum installed, and the commander-in-chief’s portrait was hung on the wall in front of the bust of Lenin. The speech was followed by a buffet — guests were treated to beer, bread-rings and sandwiches inside the rail cars.

READ MORE: What went down in the Moscow Metro during WWII? (PHOTOS) 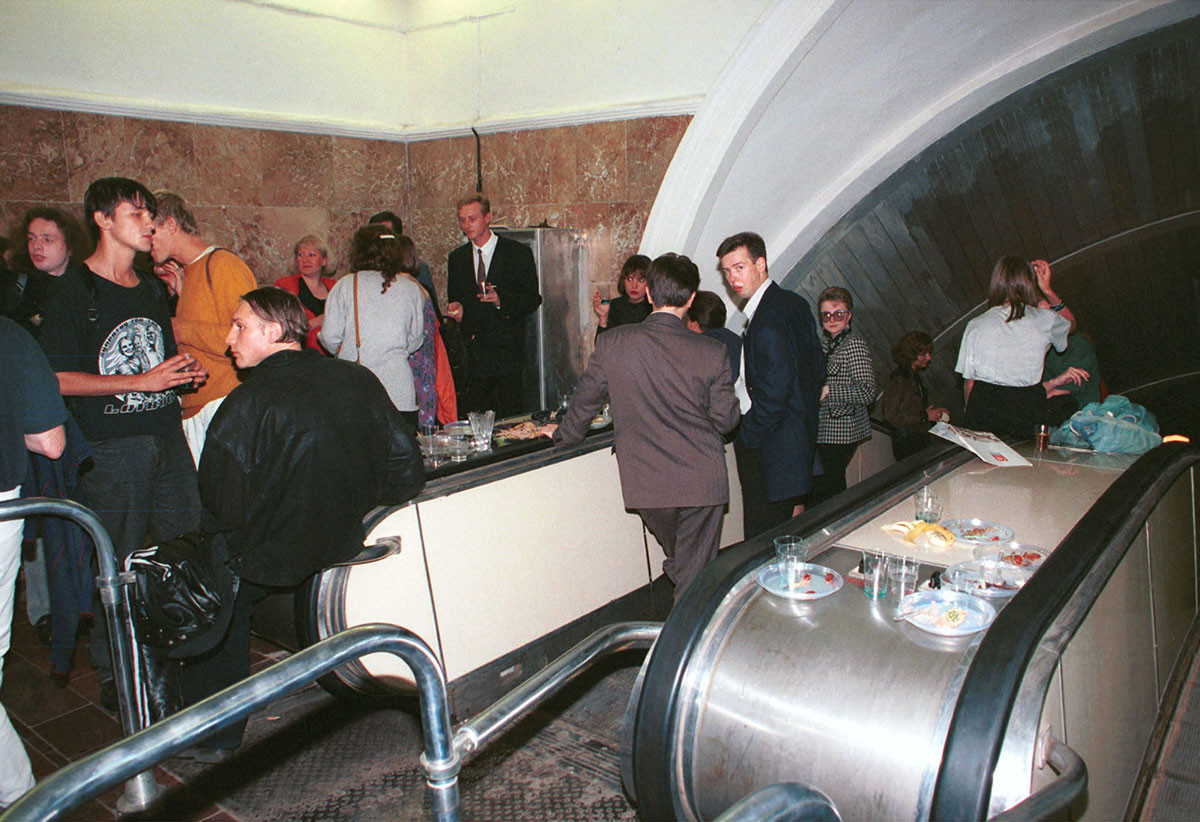 Disposable cups and plates with leftovers were scattered on the escalators, nearby were young people — some wearing windbreakers, some in denim, some in printed T-shirts, some in suits.

Sounds like a trendy rave, but this is how the glossy magazine, Ptyuch, was launched in 1994 — right inside Moscow’s Krasnye Vorota metro station. Appropriately enough, the magazine covered mostly techno music and shock-jock stories about raves, including from the eponymous club in Moscow, owned by the same person as the magazine. The front cover was often adorned by androgynous models, transvestites, designers and musicians.

Even by today’s standards, Ptyuch was radical. “It printed images of urinating boys with non-child size members, and used curse words liberally. I'll never forget the cover title: GO F*** YOURSELF. And then the cover girl might calmly declare: ‘Drugs are a permanent part of my life,’” is what former contributor Maxim Semelyak has to say about the magazine.

Ptyuch was closed down in 2003, after the wildness of the 90s had subsided. According to journalist Dmitry Mishenin, the magazine should have “called time before the turn of the millennium when it was still a not-young, but still smoking hot chick.” Nevertheless, the memory of its equally smoking hot launch in the subway lives on forever. 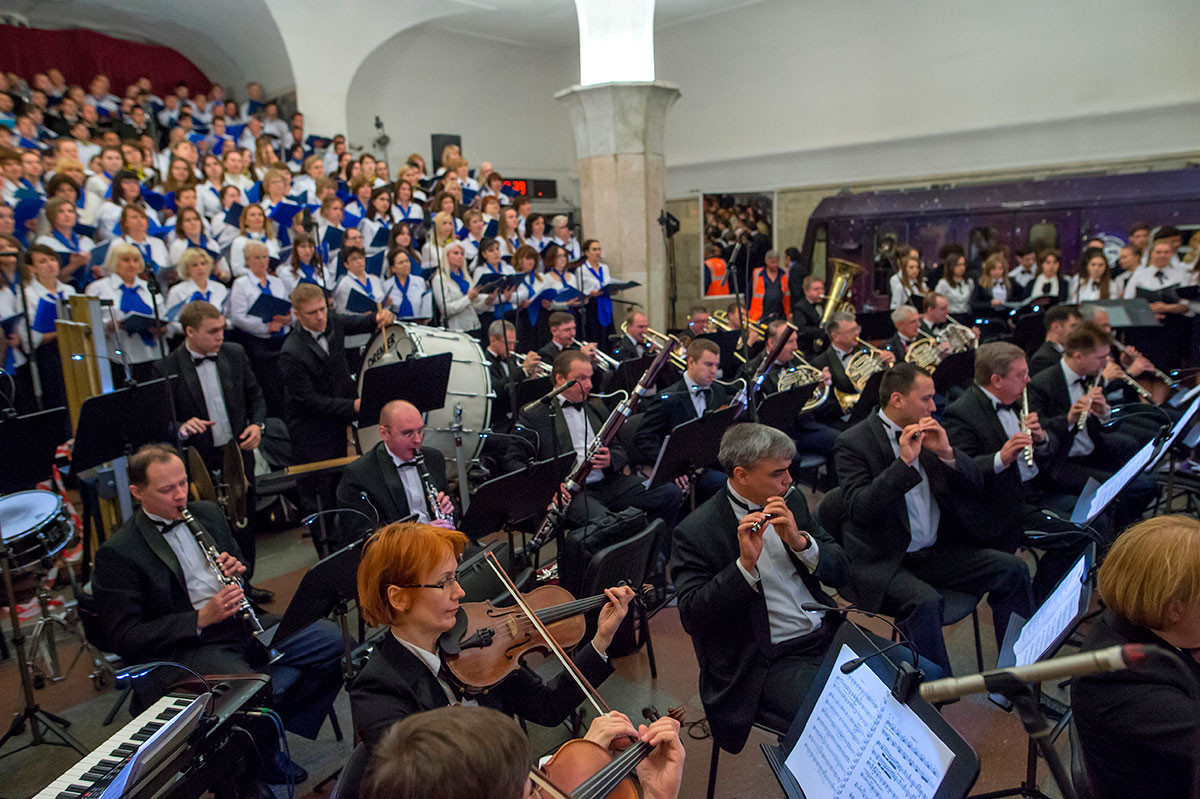 The Moscow Metro usually runs till 1 a.m., when the last handful of passengers can be seen dashing to catch the last train.

But on the night of May 14, 2016, a whole crowd gathered at Kropotkinskaya metro station, where the platform had been converted into a mini-stage for a 170-strong choir.

The Moscow Metro was celebrating its 81st anniversary, and subway employees were treated to a performance of Pietro Mascagni's opera, Rural Honor, by the Russian Presidential Orchestra, replete with conductors and five opera soloists. One of the solo parts was performed by the Danish Royal Opera prima donna, Natalia Leontyeva. “During World War II, my mother hid from the bombing in this very station,” said Leontyeva. A symphony orchestra had performed at the same station in 2010, but the opera in 2016 was the largest event in the Metro’s history.

4. Fashion show at a depot 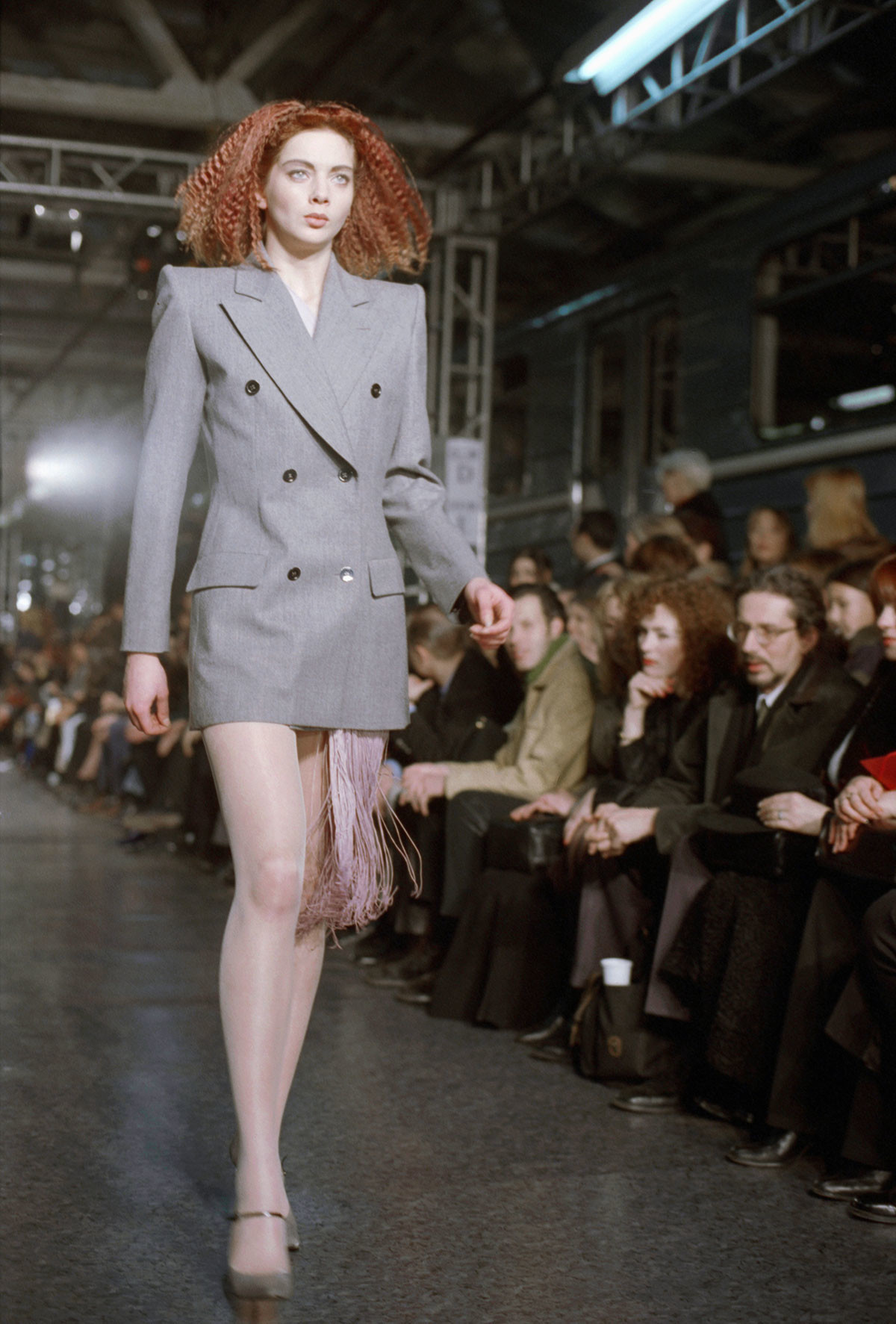 Police officers stand guard while contented, luxuriously fur-coated passengers are served champagne by waiters right inside the moving train. The train pulls into the station, where the platform is decked with several rows of chairs and a podium on which models are about to begin strutting to music, as if in the TV series Sex and the City.

That is how, in 1997, Givenchy put on a show in Moscow at the Sokol metro station depot, attended in person by Alexander McQueen, who also came to visit his own boutique in GUM. According to Kommersant newspaper, McQueen declined to appear on the catwalk, preferring to observe the reaction of guests from the sidelines. 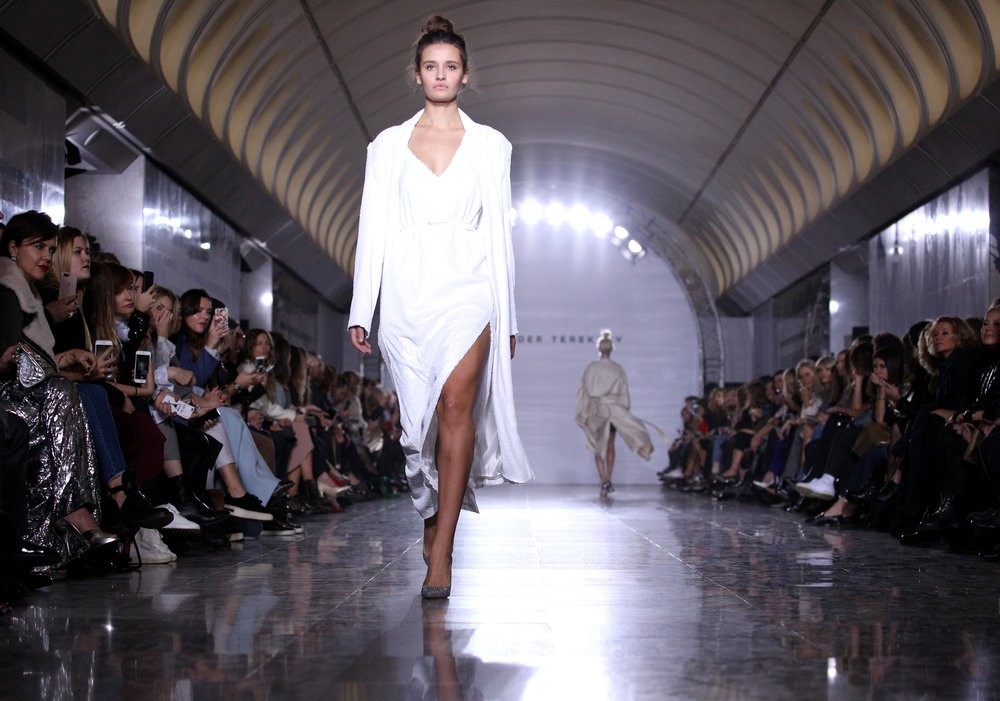 Show of the collection of fashion designer Alexander Terekhov on the platform of the metro station "Dostoevskaya". 2016

It was 2016 before the Moscow Metro hosted another fashion show, this time by Alexander Terekhov at Dostoevskaya station. There was no catwalk this time. Instead, the models walked up and down the lobby’s slippery marble floor. 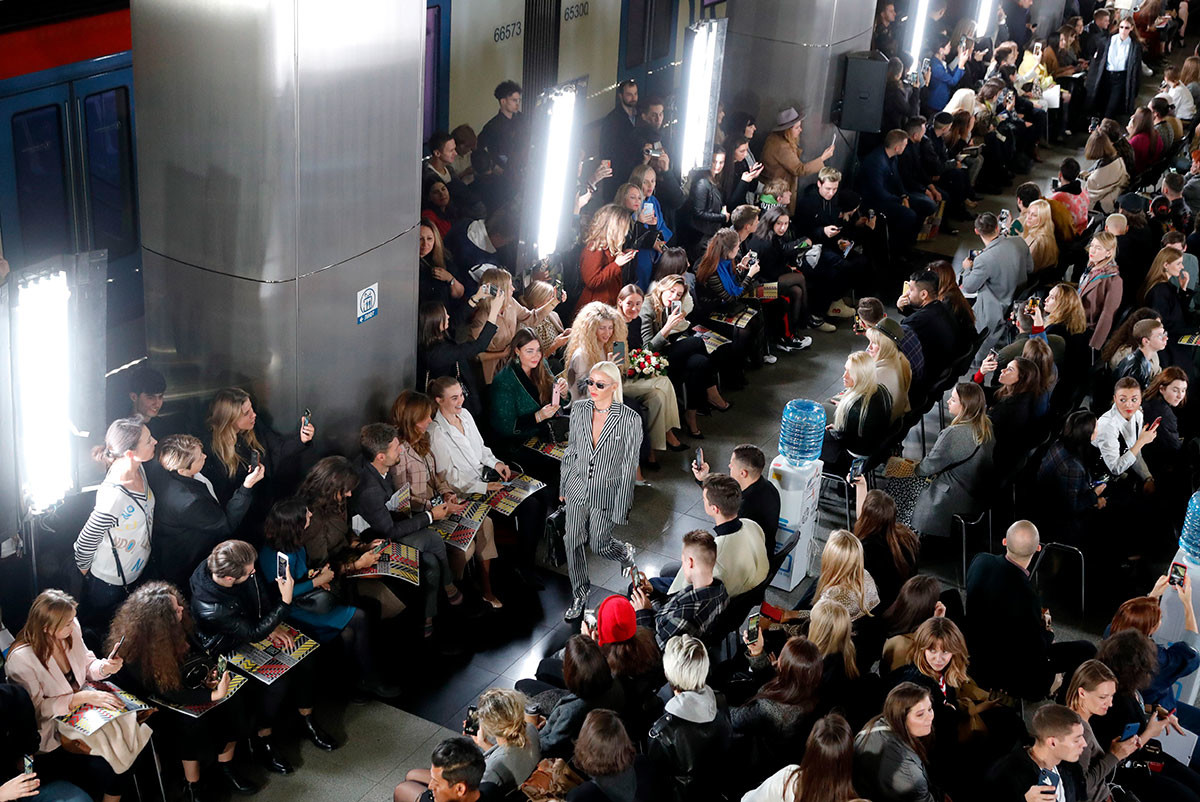 Shows by several Russian designers were held in 2019 at Delovoy Tsentr station, timed to coincide with the start of Moscow Fashion Week. The models descended directly down the escalator to the sound of train wheels as a “musical” accompaniment.

5. Funeral wake on the Circle Line 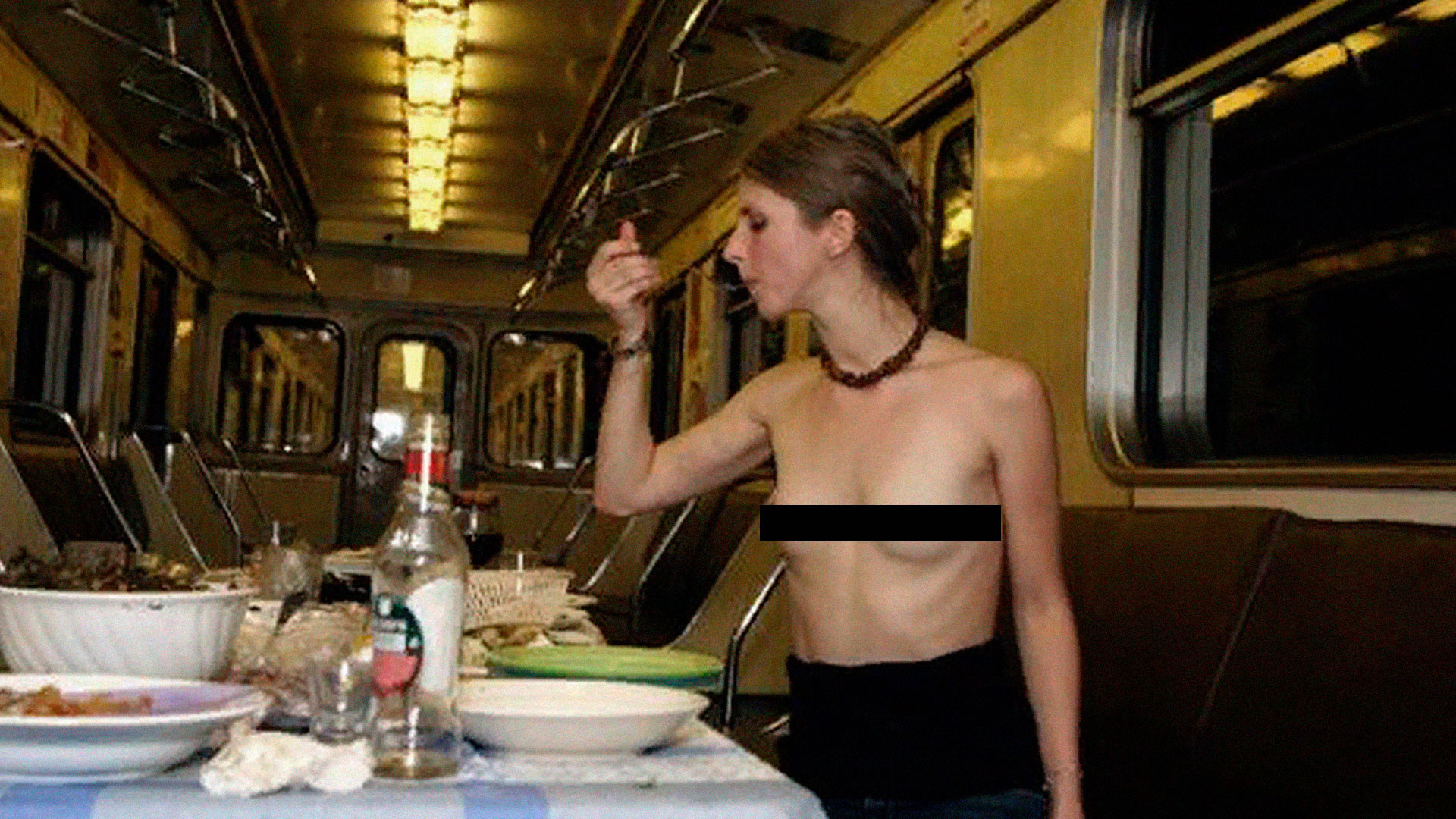 A topless woman sits in a subway carriage and eats something like Olivier salad with a fork, posing for the camera. In the foreground is a vodka-laden festive table at which both men and women sit. They’re all eating and drinking right in the rail car, without clinking glasses. Some recite poetry in unison, others sing songs to the strains of a guitar. Newly arrived guests are also treated to food and drink; there is not a policeman in sight.

At one point, one of the men says, “Thank you, we’ve done the Circle Line.” Everyone prepares to get off the train, leaving the table inside the carriage. 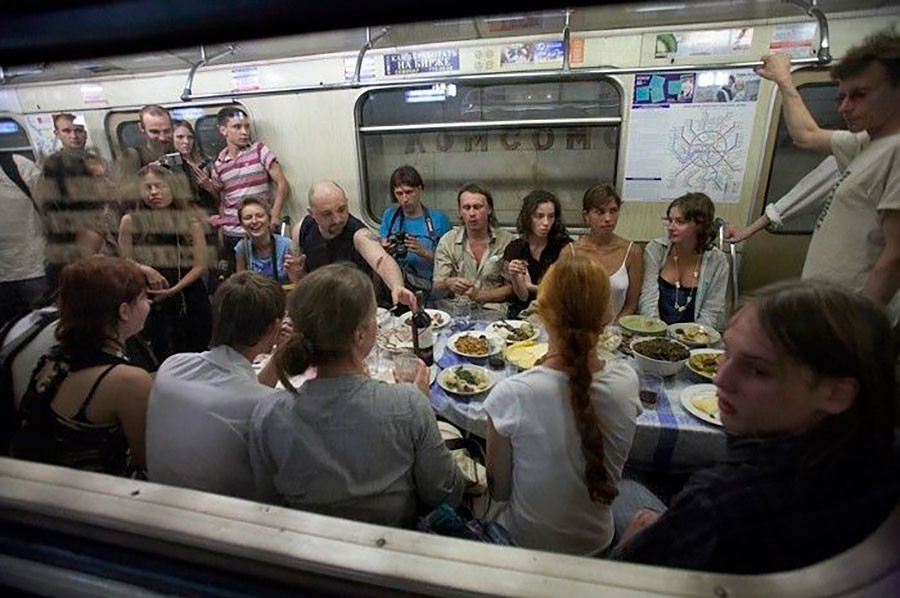 “Aren’t we taking the table?? There’s no way I’m going without it!” says one of the women. But she has no time to grab it as the doors close and the train with leftovers rolls off.

This is not some random party, but a wake held by the art group, Voina (War), 40 days after the death of avant-garde Russian writer and poet Dmitry Prigov, which took place on the night of August 24-25, 2007. In his honor, the performance artists rode around the Circle Line of the Moscow Metro. During his lifetime, Prigov was known for staging unusual performances, one of his most memorable being the media opera Russia, in which he tried to teach a cat to pronounce the name of the country. 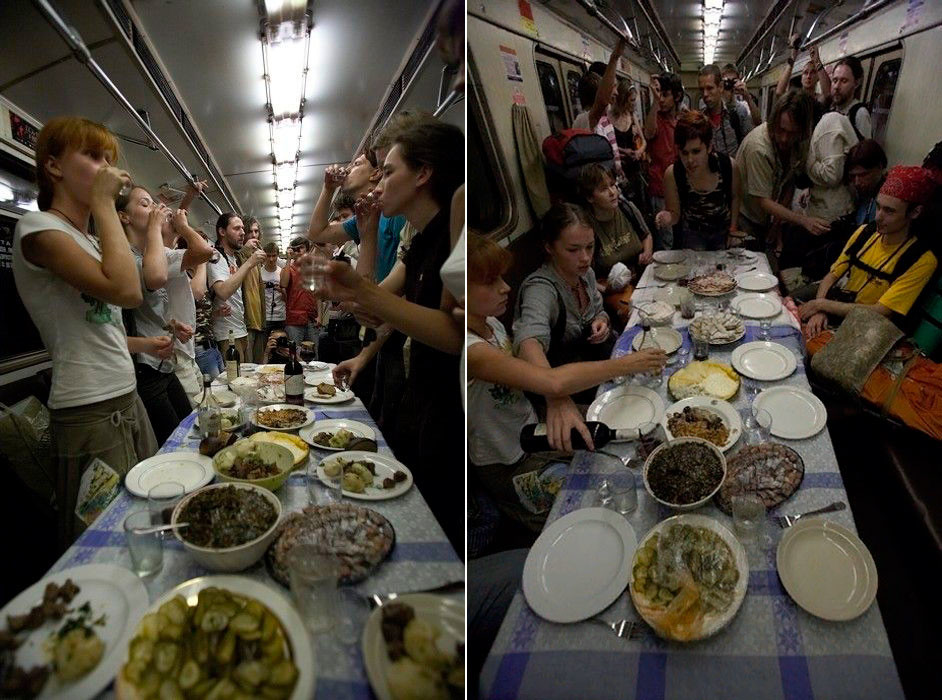 “Before the start, we wondered how many stations we’d go through before the police got us. Incredibly, not a single policeman entered our carriage, and that’s despite the fact that all rail cars on the Circle Line are equipped with surveillance cameras,” the Plucer blog quotes the words of participant Oleg Vorotnikov.