What went down in the Moscow Metro during WWII? (PHOTOS) 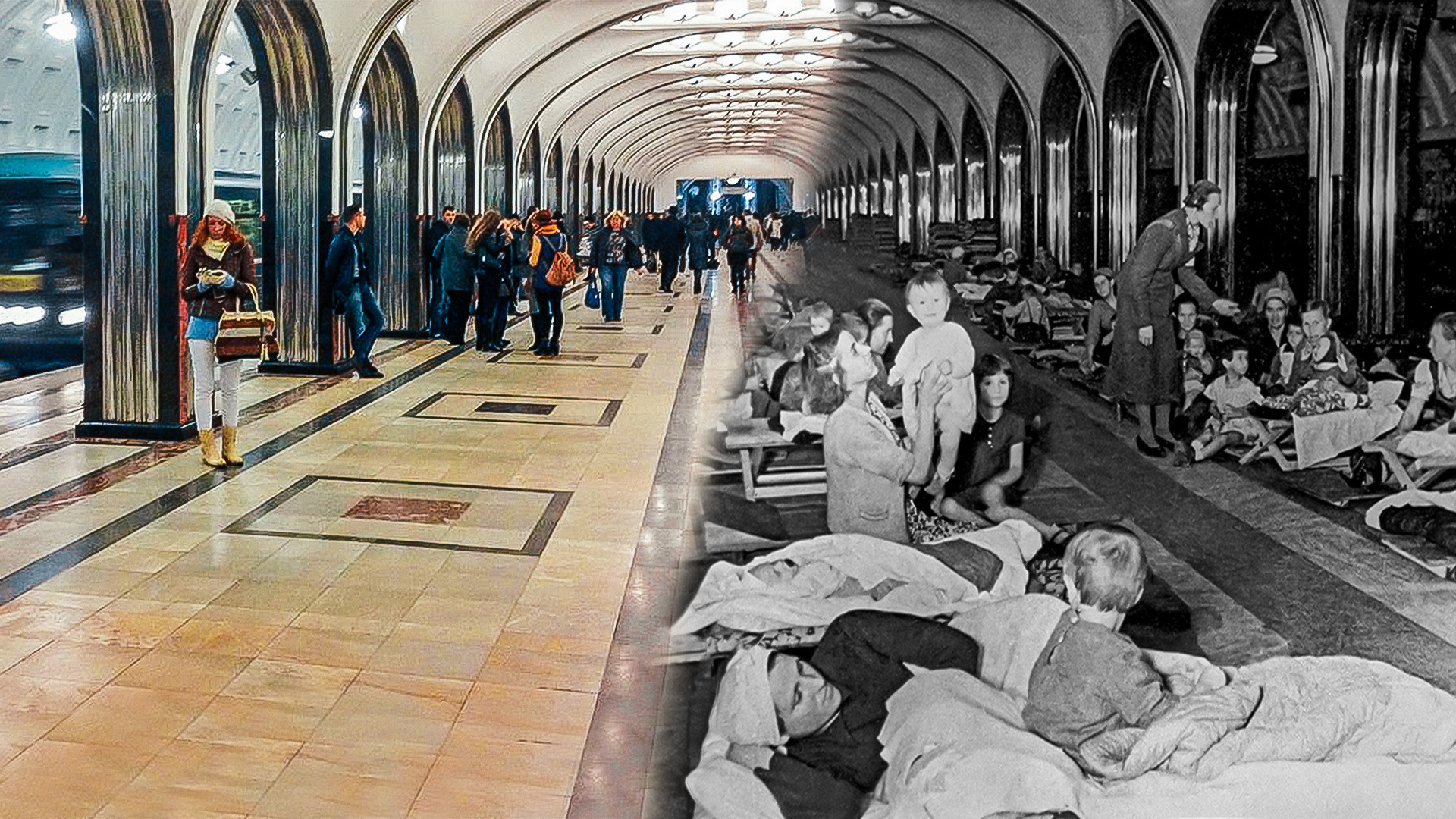 TASS; Moskva Agency
Throughout World War II, the Moscow Metro not only continued to carry passengers on a daily basis but also served as a bomb shelter for millions of people. It was a place where people could eat, sleep, visit a library and even watch a movie.

By the time World War II reached the Soviet Union in 1941, Moscow had built three metro lines with a total of 21 stations. During the war, the metro transported passengers by day and then turned into a bomb shelter at night. During bombing raids in 1941, it provided shelter to a total of 13.9 million people. In 1942, when air raids were less frequent, that number dropped to 303,000 people. The last shell fell on Moscow in June 1943, but the metro retained its status as a bomb shelter until the very end of the war. 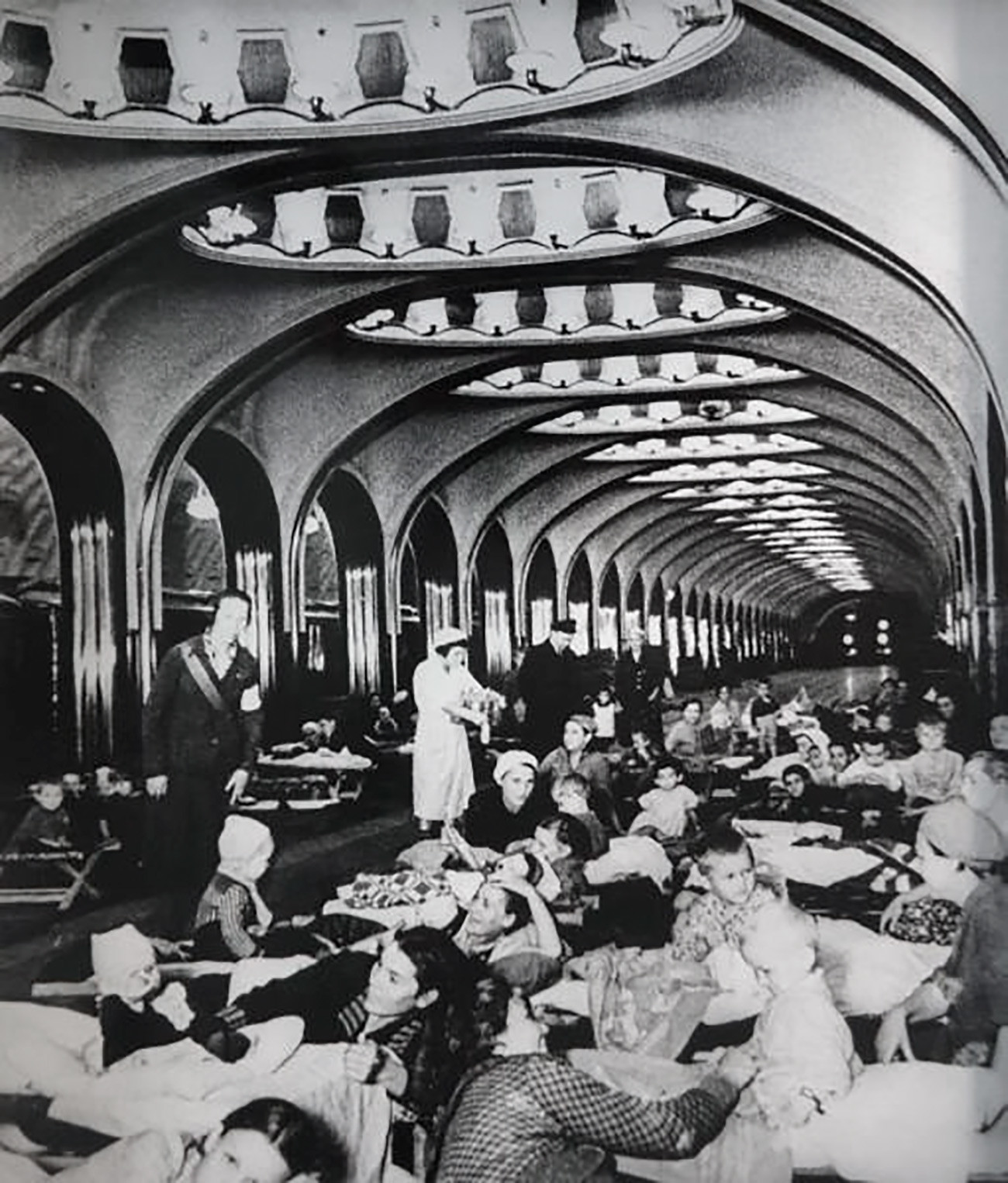 The first air-raid signal sounded in Moscow a month after the start of the war on July 22, 1941. Some 500,000 people hid in its stations and tunnels at the time. Another air raid took place the following night. One of the shells damaged the tunnel between Smolenskaya and Arbatskaya stations, another hit the overpass of a metro bridge and a third exploded at the entrance to the Arbatskaya station. Dozens of people were killed, including in stampedes at the entrance to the stations. After this, rules for using the metro as a bomb shelter were developed. 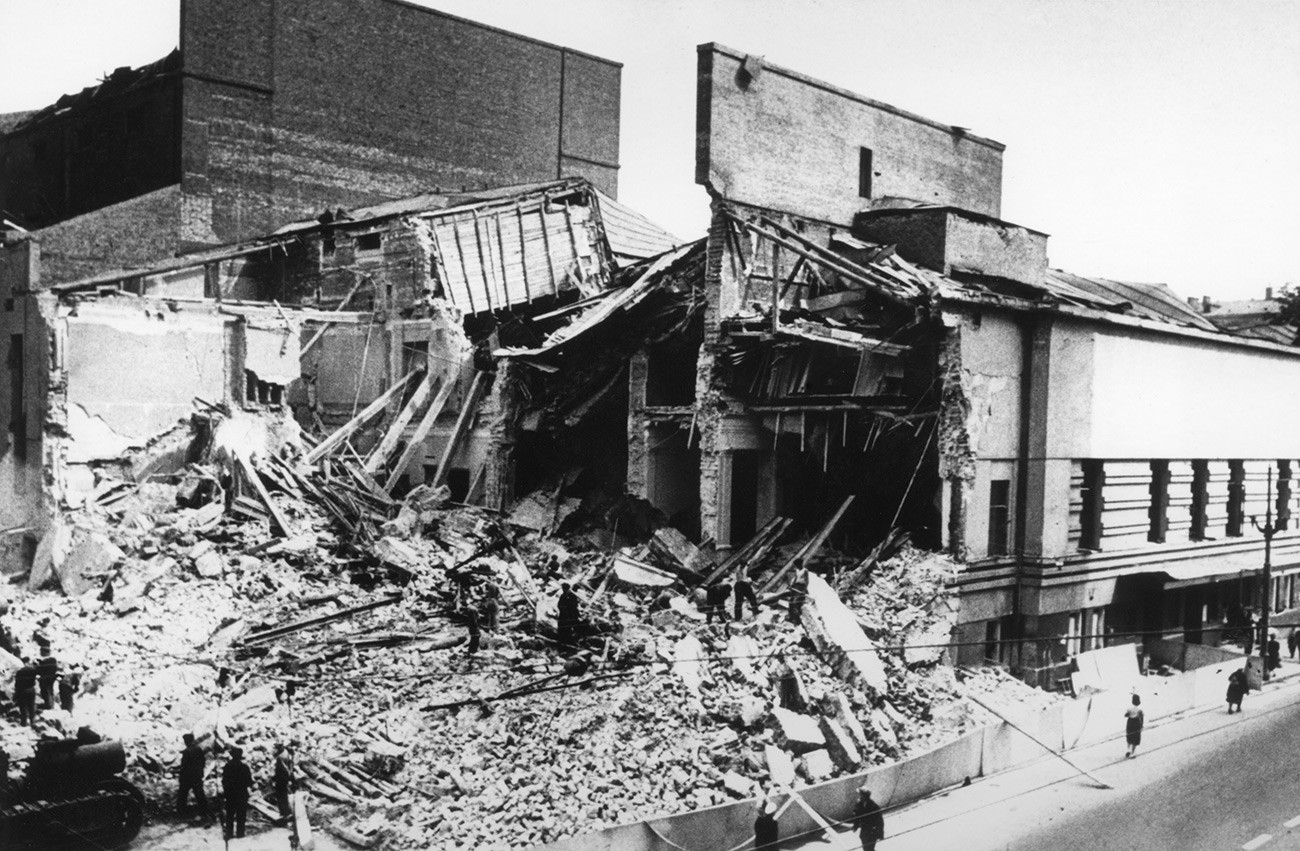 The theater on Arbat street, destroyed on July 1941.

During the war, the metro worked until 10:00 p.m. and then functioned as a shelter until 5:00 a.m. In the event of an air raid, trains stopped running immediately and metro personnel prepared to receive people. Moscow suffered its worst bombing in October and November 1941. During this period, trains stopped running between 5:00 and 7:00 p.m. and then Muscovites settled in for the night in metro coaches, at the stations and in tunnels. 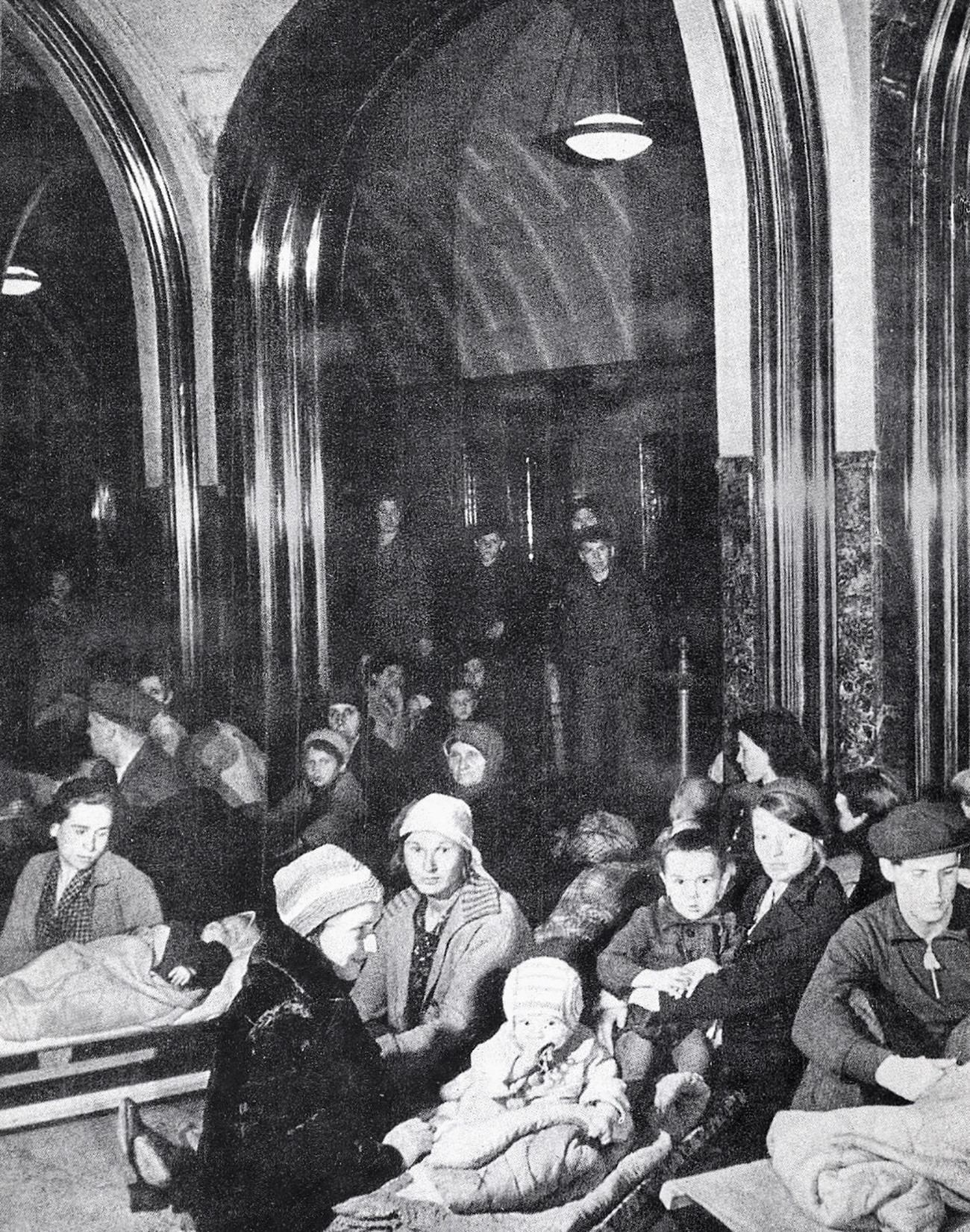 According to the archives of the Moscow Metro, a total of 3,800 cribs and 4,600 beds for adults were installed at the stations. Drinking fountains and water taps were installed on the platforms, along with 25 toilets. Doctors were on duty at the stations at all time. In the evenings, children were given milk and white bread. In addition, some stations even organized movie screenings. 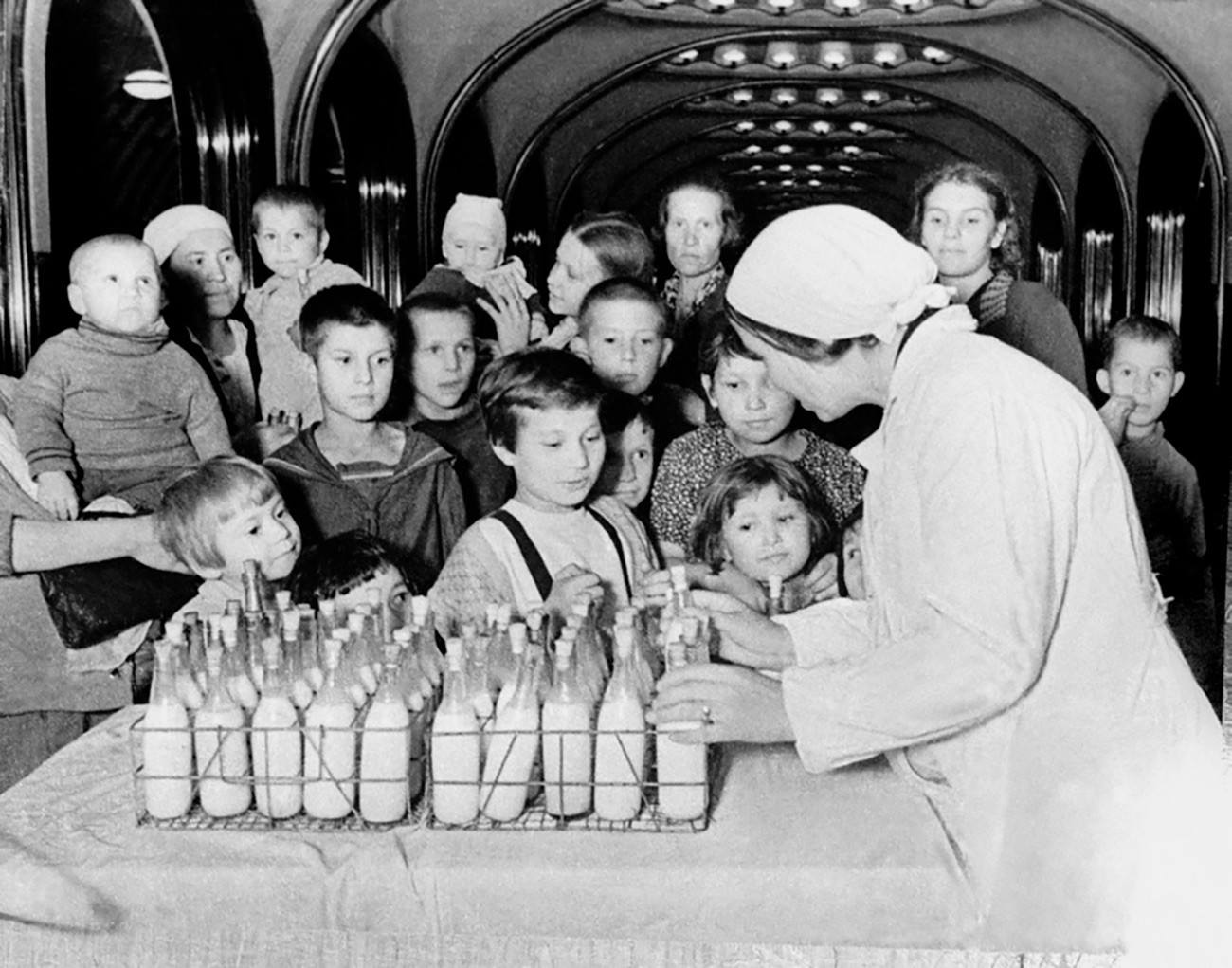 In November 1941, a branch of the History Library was set up at Kurskaya station. “I visit it almost daily,” one of its patrons wrote. “Not because my journey home runs through this station, but because I come to read newspapers and other literature...The only drawback that cannot be eliminated is the circulating air from the movement of trains and a continuous stream of passengers.” 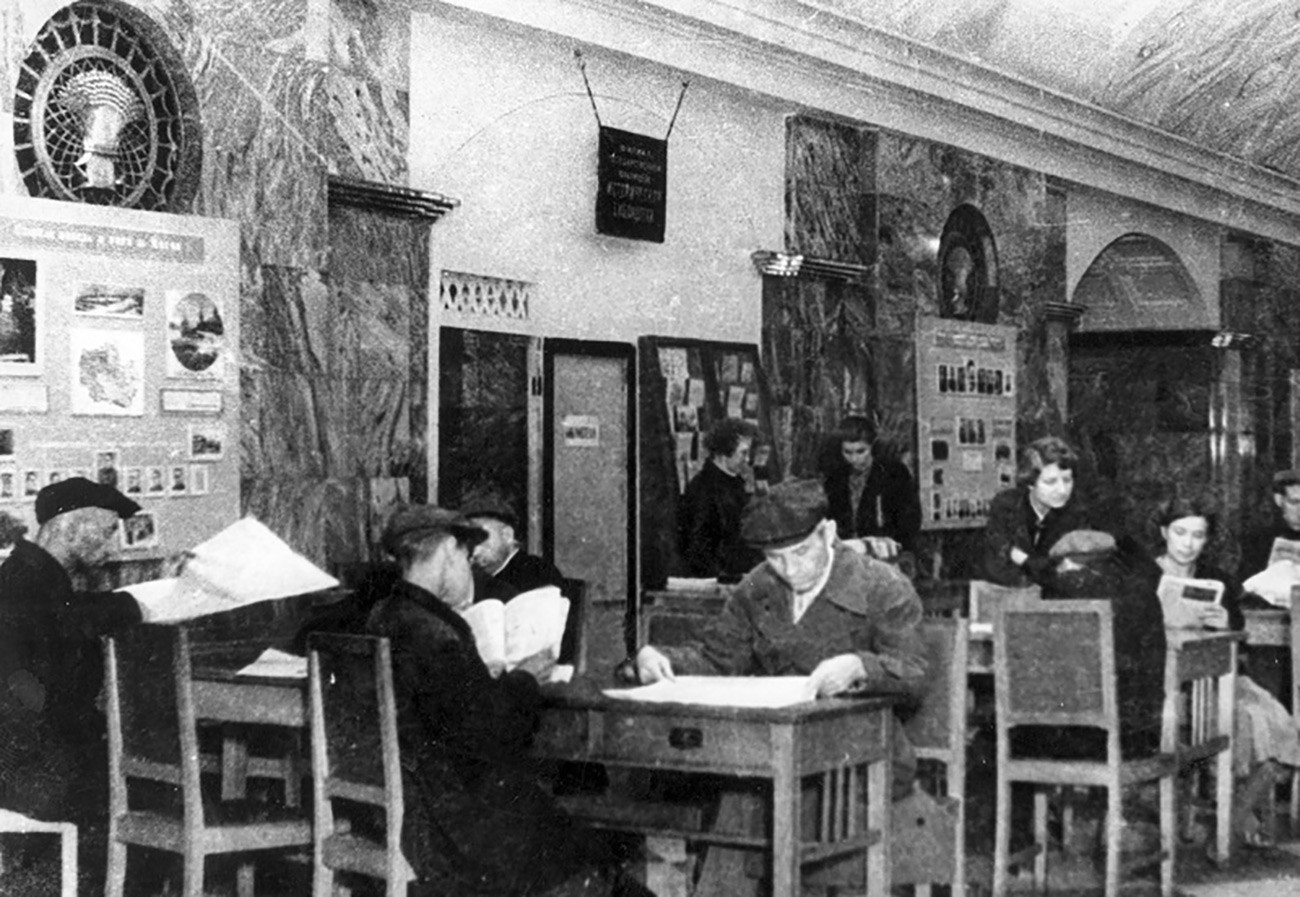 A library at the Kurskaya station.

The Chistye Prudy station (then called Kirovskaya) was closed to passengers and converted into a space for the General Staff. At the beginning of the war, the operational command, headed by Joseph Stalin, was based in a house near the entrance to the station, from which one could take an elevator to the underground complex of the command post and cross over into the station. 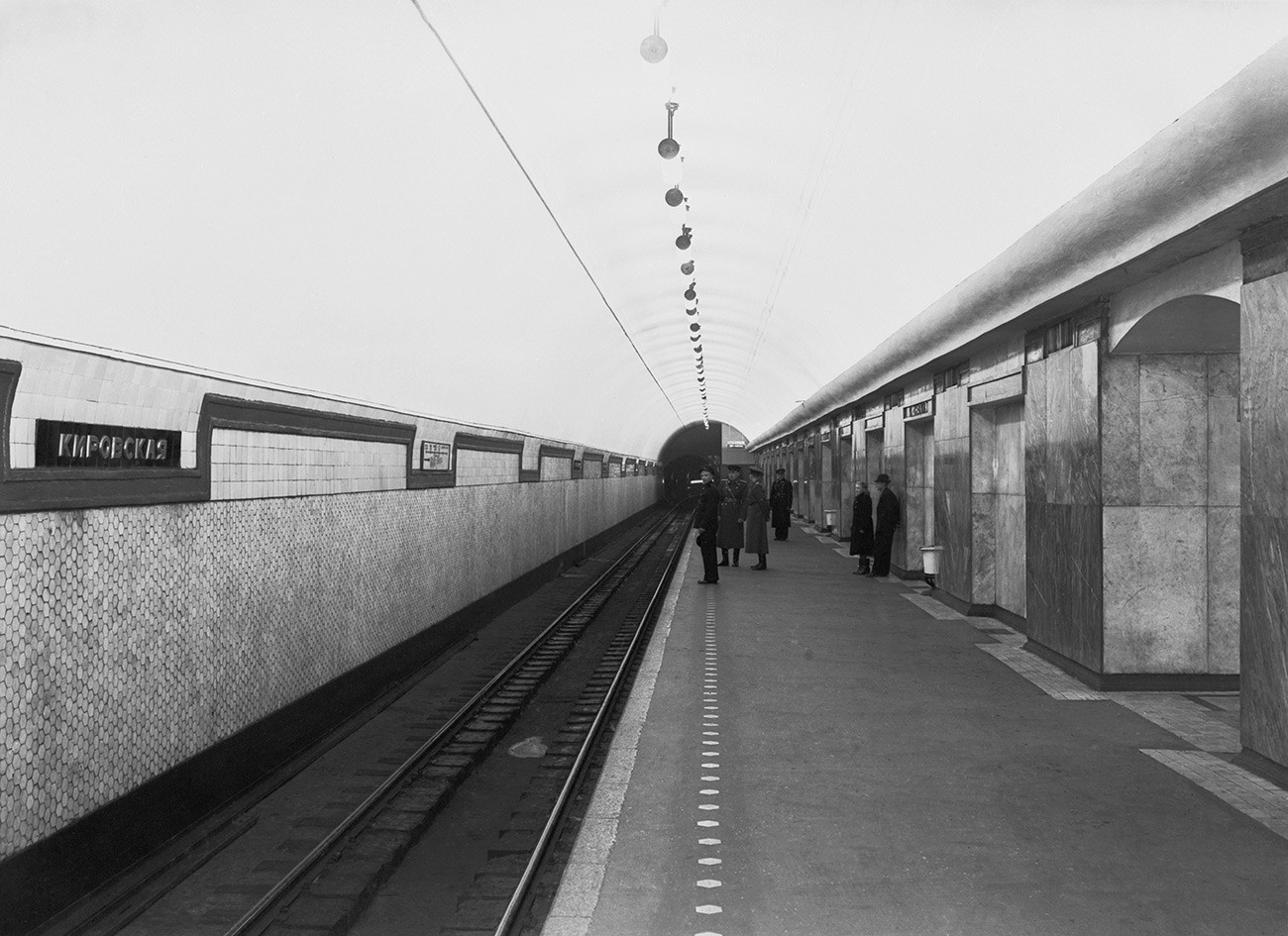 A plywood partition shielded the platform from passing trains, and a reinforced concrete wall was placed in front of the escalators to extinguish a blast wave in the event of a direct hit by an air bomb. The other military command posts were located at Krasnye Vorota, Belorusskaya and Ploshchad Sverdlova (now Teatralnaya) stations.

Despite the bombing, the Moscow Metro continued transporting millions of people. The only day in its history when the metro failed to open on time was October 16, 1941. The previous day, the Soviet leadership had decided to destroy the metro and evacuate its trains and other equipment to the rear so as not to surrender it to the enemy. On the night of October 15-16, preparations were under way to flood the station, electric cables were being cut and escalators dismantled. But then in the morning the decision was canceled, and at 6:45 p.m. the metro went back to work. However, some of the equipment was still evacuated to Uzbekistan, leaving only 105 metro coaches in Moscow. If before the war the metro carried 27 million passengers a month, in October 1941 that figure was just 8 million. (Nowadays, the Moscow Metro carries this many passengers in less than a day!) 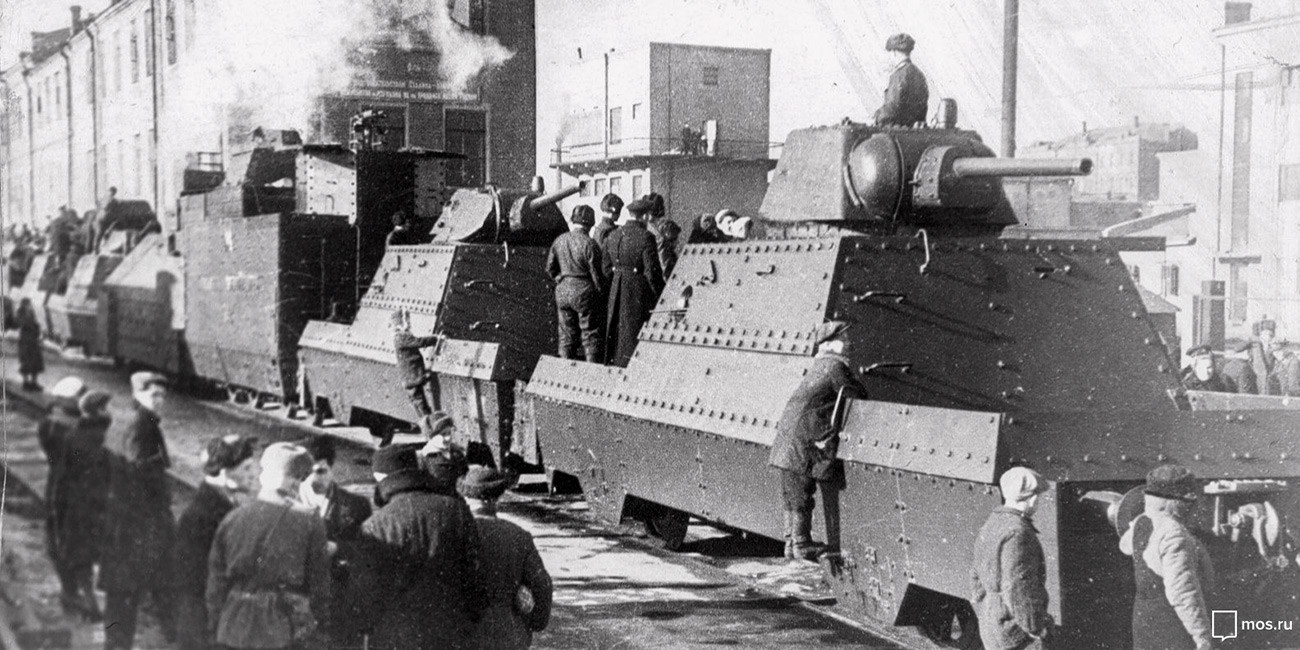 During the war, when the majority of men had been conscripted, the metro was staffed mostly by women. The first all-women train, which was run only by female drivers, appeared on March 8, 1942. Women continued to work in the metro after the war too. Some depots—for example, the one at the Sokol station—were used to make bodies for shells and mines. 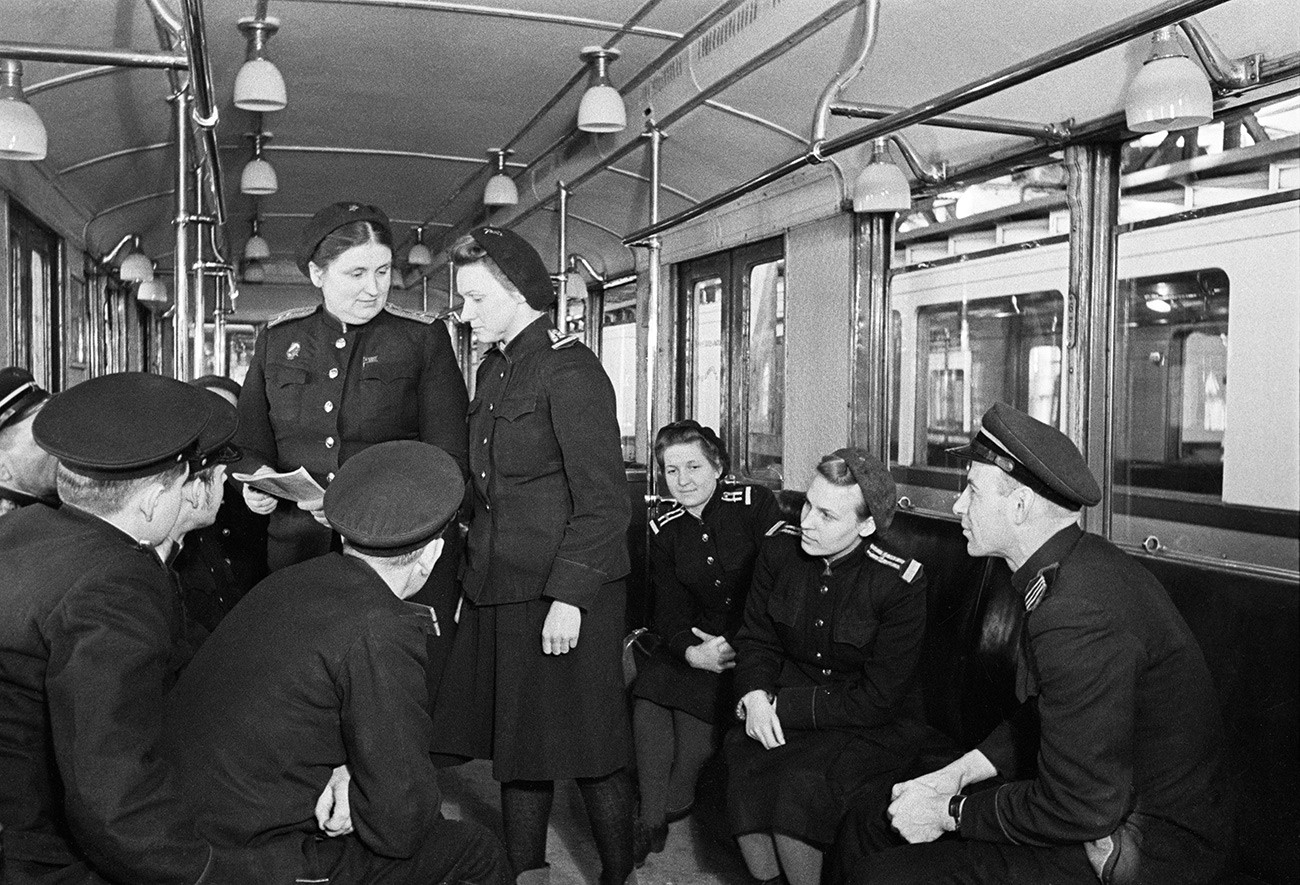 The city continued to build new stations and tracks despite the war. In 1943, a tunnel was laid under the Moskva River from Teatralnaya to Avtozavodskaya, and then from Kurskaya to Izmailovsky Park in 1944. Seven Moscow Metro stations have commemorative plaques reading: “Built in the days of World War II.” 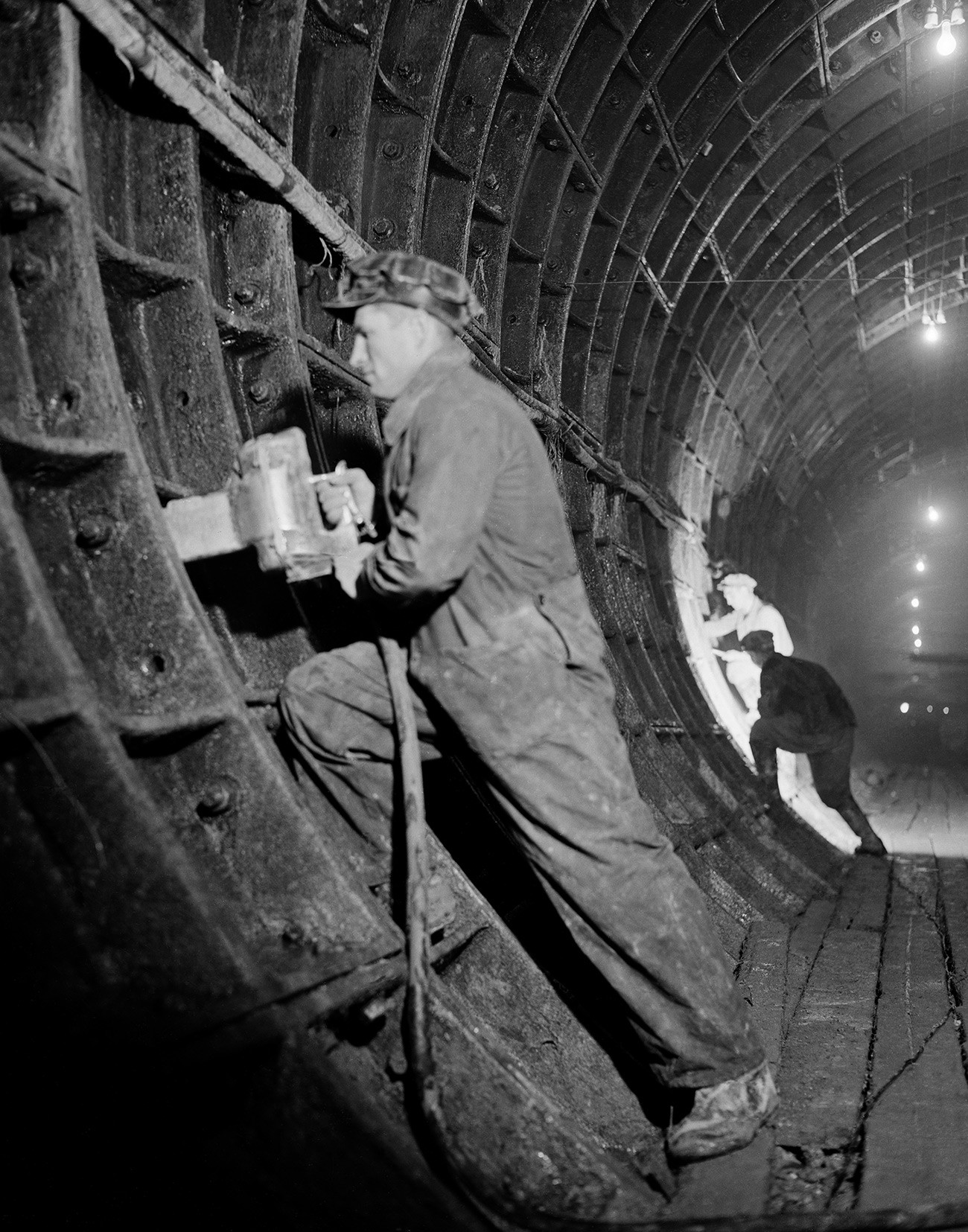